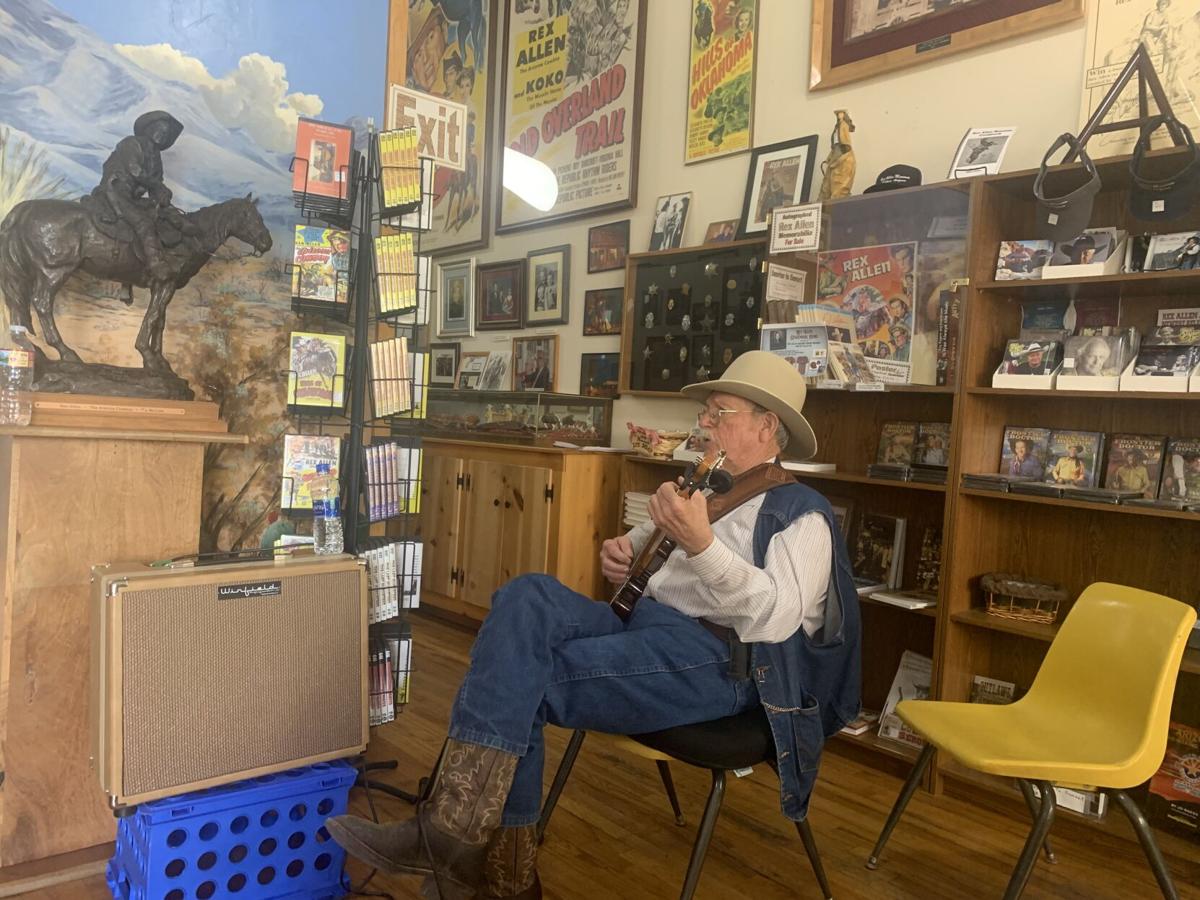 Gary Melton, 74, of the Cataract Cowboys, plays rhythm guitar inside the main entry of the Rex Allen "Arizona Cowboy" Museum and Willcox Cowboy Hall of Fame. 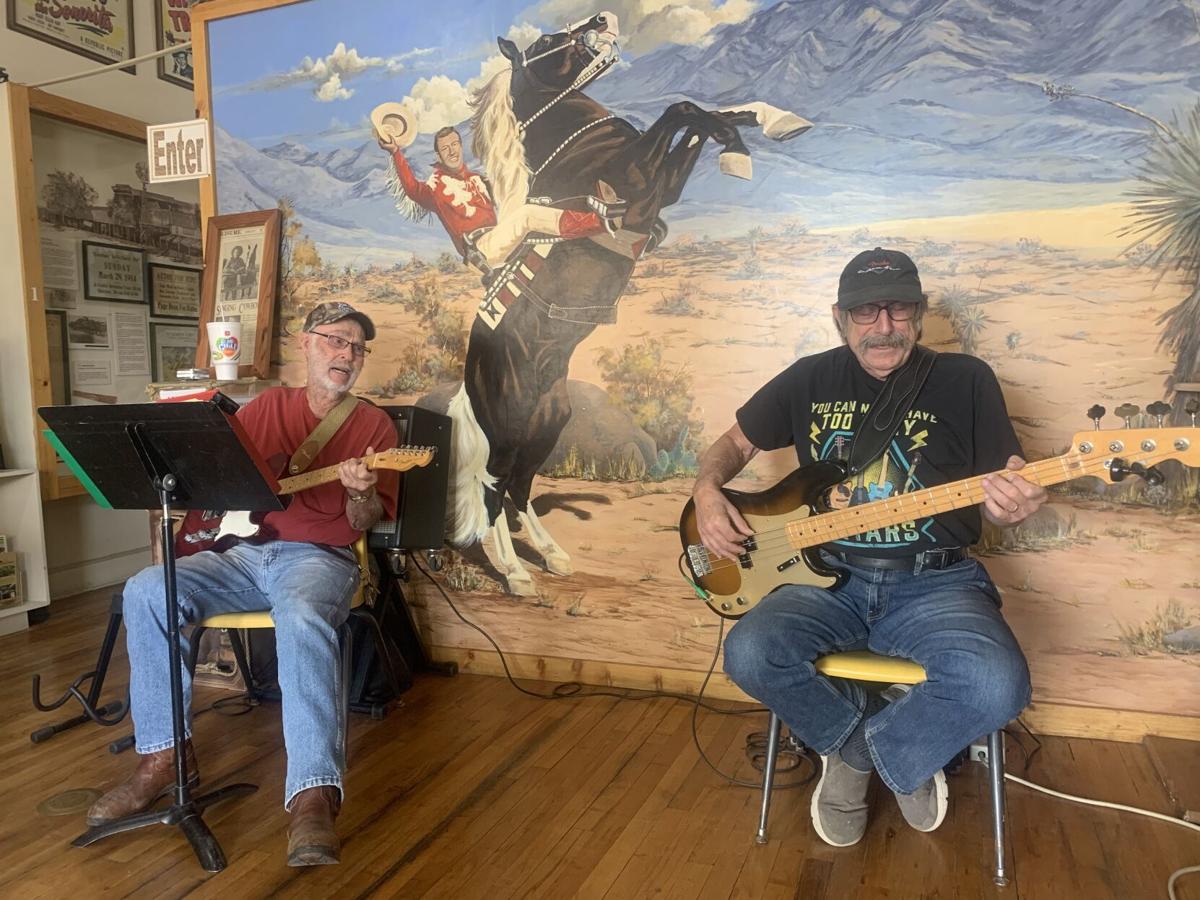 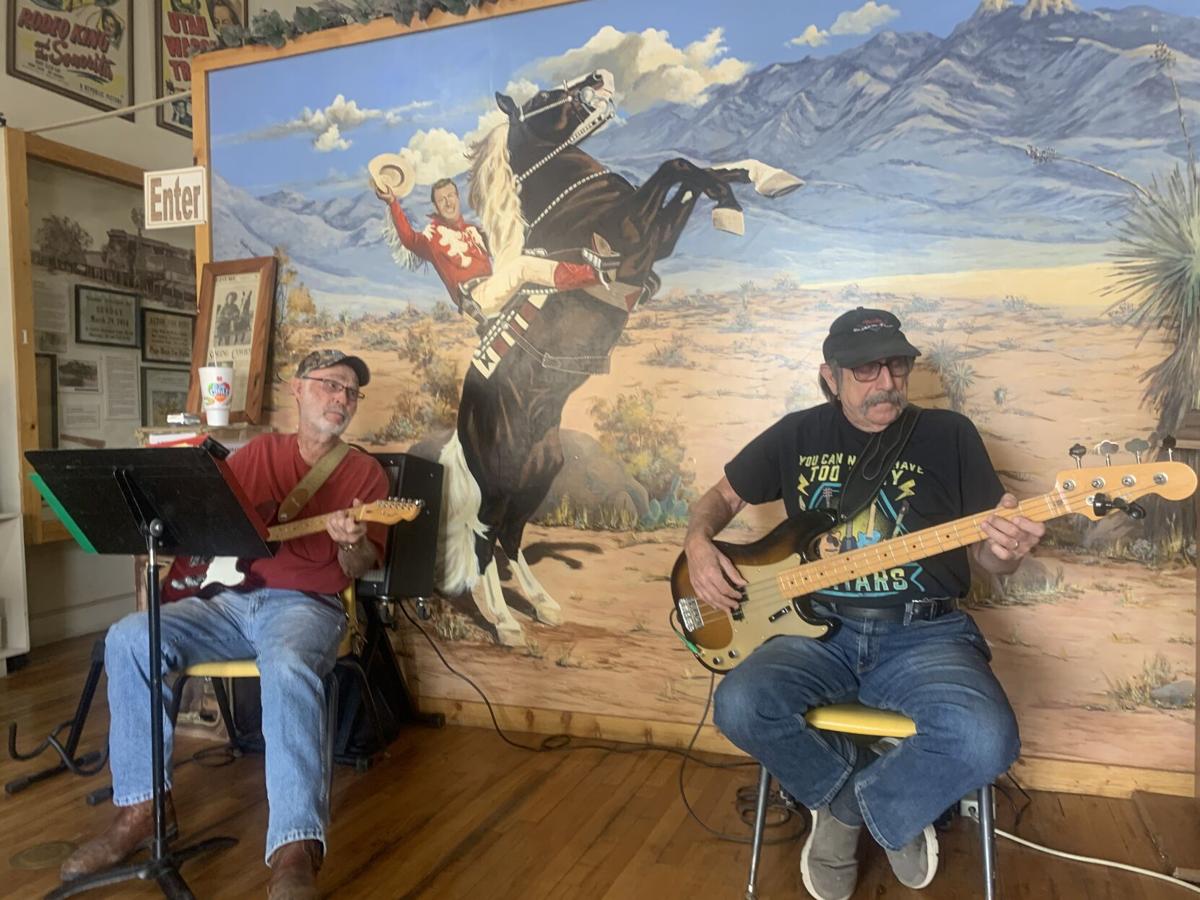 Dale Bittle, left, looks on as "Winnie" Thomas gets in the spirit of soloing by closing his eyes. 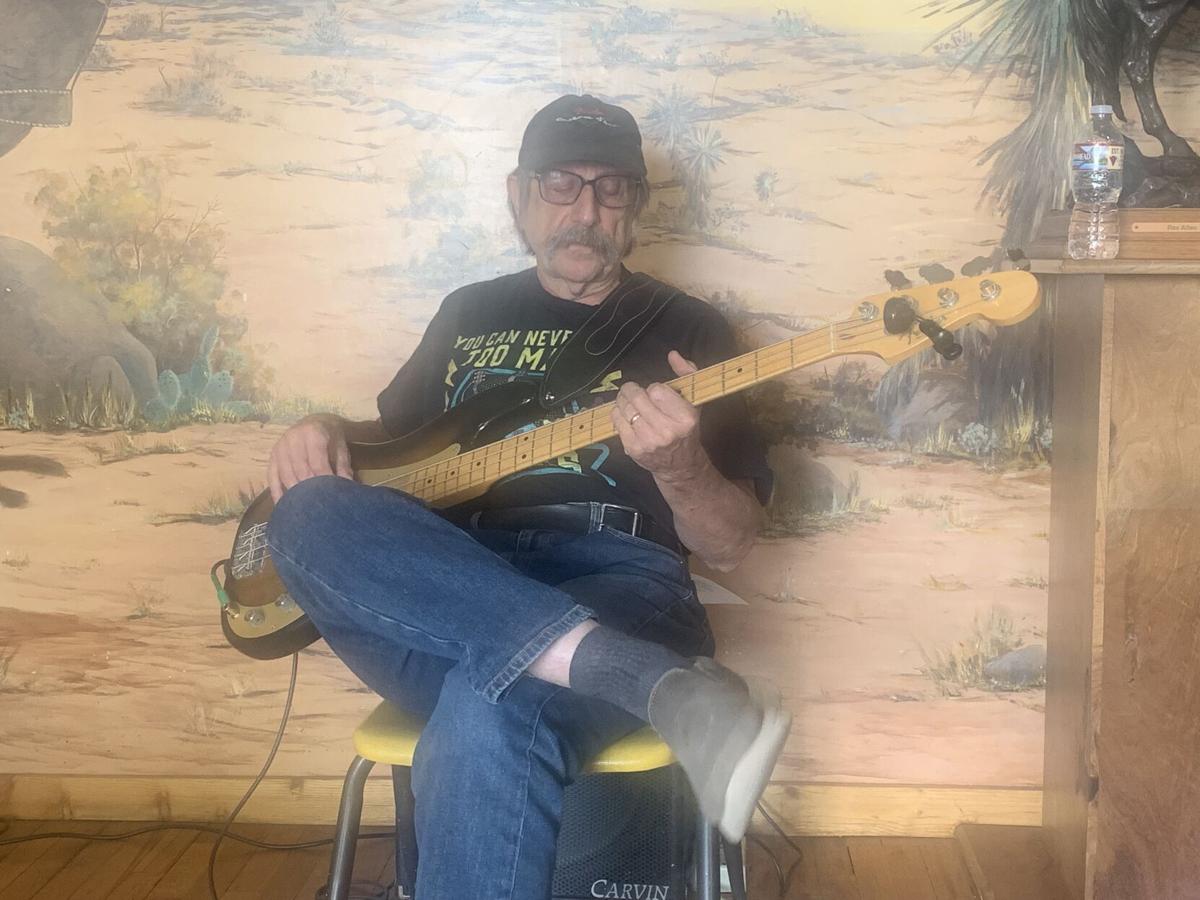 Winfield "Winnie" Thomas is feeling the rhythm with his entire mind, body and soul as he plays bass. 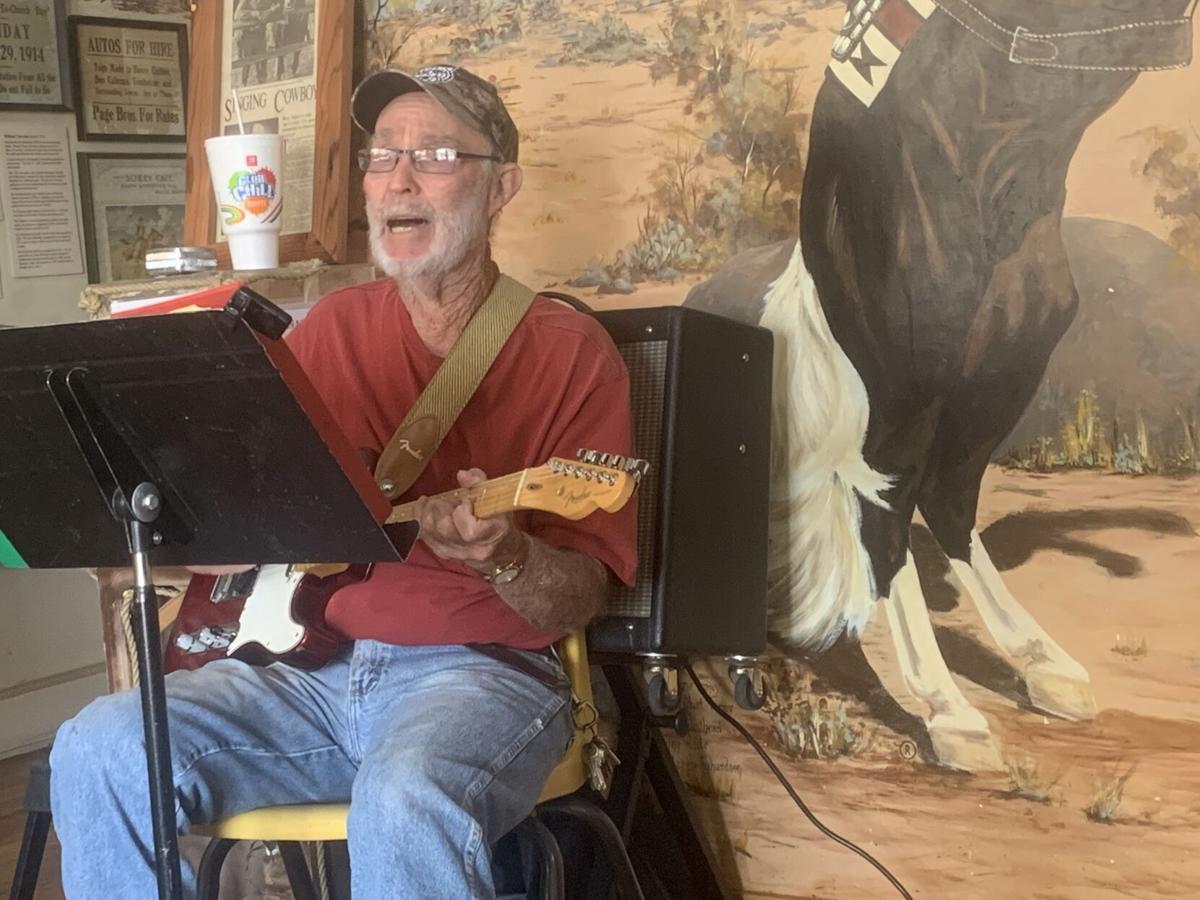 Dale Bittle, at 77 the oldest member of the Cataract Cowboys, hits a higher vocal range. 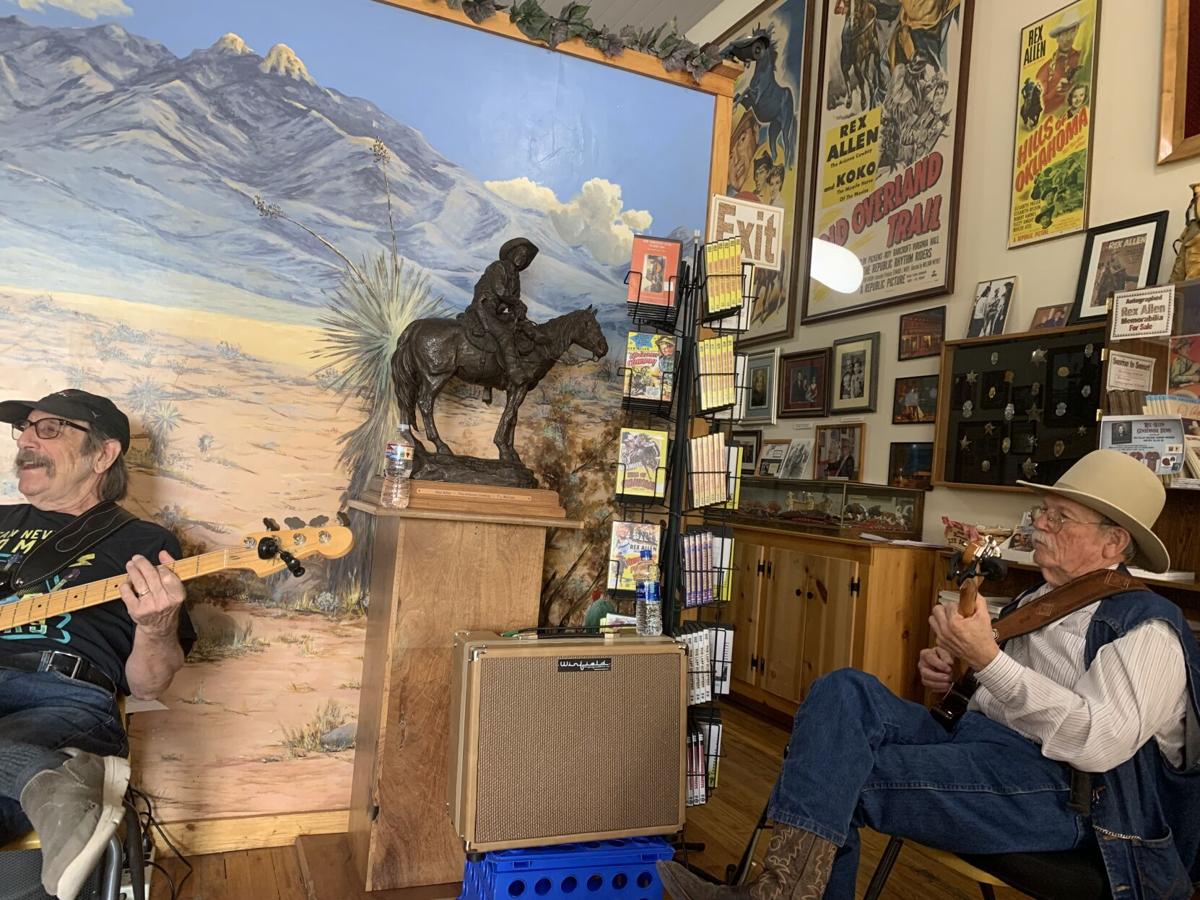 Gary Melton, 74, of the Cataract Cowboys, plays rhythm guitar inside the main entry of the Rex Allen "Arizona Cowboy" Museum and Willcox Cowboy Hall of Fame.

Dale Bittle, left, looks on as "Winnie" Thomas gets in the spirit of soloing by closing his eyes.

Winfield "Winnie" Thomas is feeling the rhythm with his entire mind, body and soul as he plays bass.

Dale Bittle, at 77 the oldest member of the Cataract Cowboys, hits a higher vocal range.

WILLCOX — The Cataract Cowboys are three men older than 70 who have two things in common, a love for music and a love for “Arizona Cowboy” Rex Allen.

Two members out of the current lineup of the Cataract Cowboys, Gary Melton, 74, rhythm guitar; and Dale Bittle, 77, lead guitar, have known each other for 10 years.

Bittle is not only the oldest guy in the band, he is also the only one still working.

They were joined on Monday morning by Winfield "Winnie" Thomas, bass. In addition to playing bass, Thomas, who grew up in the New York City area, claims that he has been singing for “probably 70 years.” Thomas never offered his age, unlike Melton and Bittle.

“Well, I started out as a kid,” Thomas said.

“We had different guys come and go. A couple of the guys moved to Tucson and once in a while someone came and played. The three of us have been together a long time.”

“I moved to California when I was 16 and I was over there,” Melton said. “I came over here (to Willcox) in 2001. When I moved here I loved it. I always loved Rex and I got to know him a little bit. That’s why I moved here. Support this museum. First time I got here I met Rex. I said I’ll move here and I moved here.”

“We all play together somewhere. (William) ‘Kelly’ (Rowden) who was here, he died (last November). He was the guy who did all the Rex Allen songs. He had that type of voice.”

“We’re going to Benson Friday night,” Bittle said. “Do a deal over there, the three of us. Then later on in the fall we’re going to Duncan. My 60th class reunion. We’re doing the music. I got invited. Looking forward to that.

“We went over to the 50th and we did some music. Then I went with a guy, he’s from Duncan. He had a friend over there who invited us over and we went over, several of us, and did a deal over at a church. An old Mormon church.”

Growing up with music

“My family played music and I did,” Melton said. “I’ve played since I was 15. I was born in Illinois, but I spent most of my time in California. When I was kid my family played country music and then I always liked the big band stuff.

“I loved Frank Sinatra and Bing Crosby. Stuff like that, but then I also was growing up with Hank Williams and the singing stuff. That kind of stuff.

“Then 1980 I met a guitar player. A guitar player who played for Bob Hope and I was with him for several years. Became very good friends. So I’ve done jazz style of playing. I played both. Kind of country music and then swing and jazz.”

“Kelly and I when we had our band together, just the two of us, we called it the Cadillac Cowboys,” Melton said. “We used to tease each other and when we’d go to places we would say we should call ourselves the Cataract Cowboys because he was full grown and so was I. We just incorporated the name. Hijacked it and turned it into the Cataract Cowboys.”

The Cataract Cowboys perform (sometimes as a three-piece band including Bittle, sometimes just Melton and Thomas) on Mondays from 10 a.m.-noon. For info on when they will be playing, contact the Rex Allen Museum and ask for Sandy or Gail.

Editor's note: A previous version of this story misspelled Dale Bittle and Winfield "Winnie" Thomas names; the Herald/Review apologizes for the error.