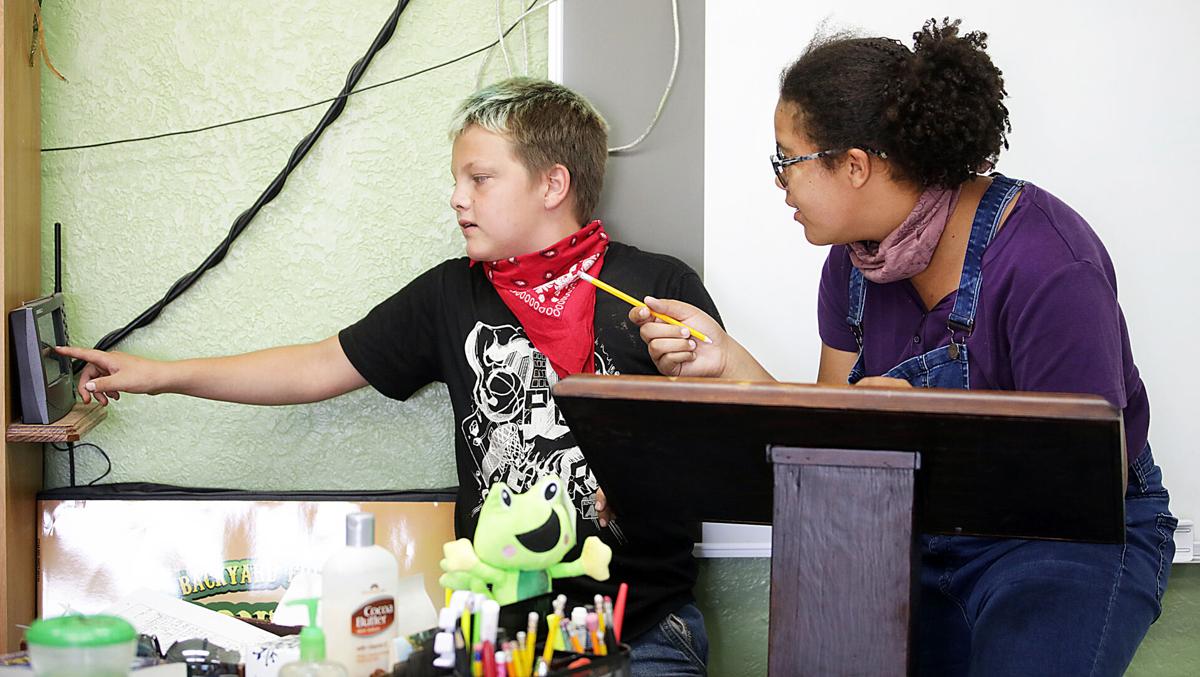 Apache Elementary School 7th graders Weston Strickland and Evalynn Robert log the data from the weather station monitor this week. The pair check the data three times a day then report the information to Howard Topoff for the Portal/Rodeo website. 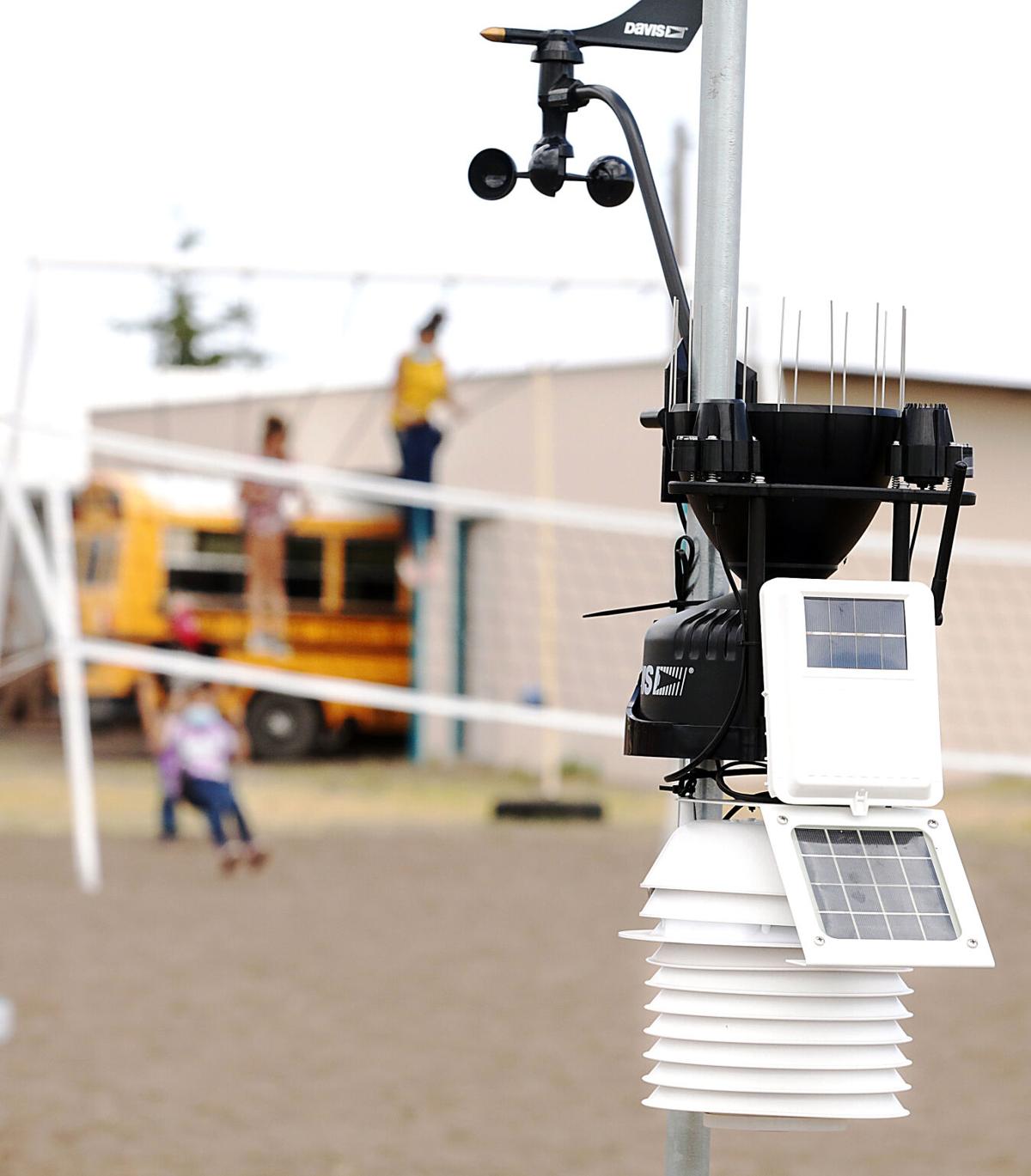 A weather station was installed in the playground of the Apache Elementary School near Portal in July. The weather apparatus was provided by the Malpai Borderlands Group. 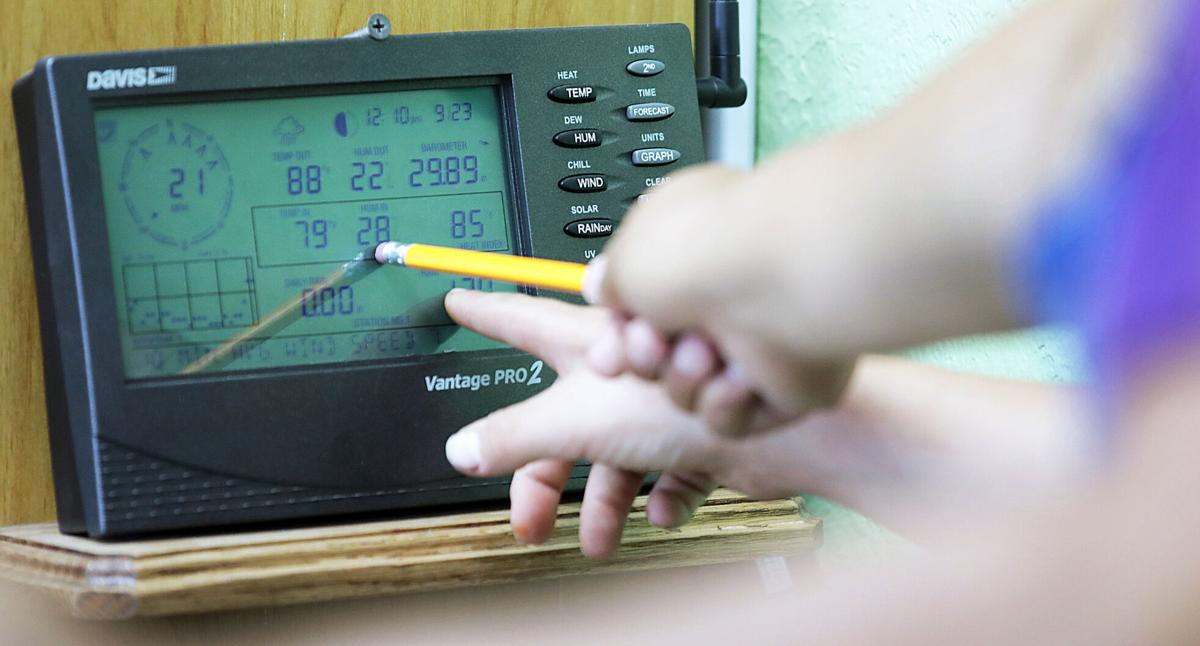 Apache Elementary School 7th graders Weston Strickland and Evalynn Robert log the data from the weather station monitor this week. The pair check the data three times a day then report the information to Howard Topoff for the Portal/Rodeo website.

A weather station was installed in the playground of the Apache Elementary School near Portal in July. The weather apparatus was provided by the Malpai Borderlands Group.

APACHE — In the picturesque, easternmost part of Cochise County lies a one room elementary school which has now become an important addition to the gathering and dissemination of weather information.

Apache Elementary School, one of four remaining one–room schools in the state, was a selected site by the U.S. Department of Agriculture’s Jornada Experimental Range (JER) in Las Cruces, New Mexico, for a much needed weather station in the remote area between the Peloncillo and Chiricahua Mountains.

Myles Traphagan, with the Wildlands Network’s borderlands program, along with Rich Winkler, who sits on the board of directors of the Malpai Borderlands Group, also installed in July weather stations in Animus, the south San Simone Valley and the San Bernardino Valley to gather important information on local weather.

“It shows the generous support of the JER,” Traphagen stated. “We’ve been wanting stations for this region for a long time. The weather here can be very different from Douglas and Lordsburg which supply weather information. So, these new stations will provide data as it applies to the local areas. And with climate change, the data is more important than ever.”

According to Traphagen, the data has an important function in modeling for climate change and weather predictions.

“With climate change, there will be more frequent drought,” he said. “So, the data is more important than ever. Most ranchers out here also have weather stations and they can be more detailed. So, we get a good picture of what’s going on in the whole area.”

He pointed out August was the hottest month in history, with July coming in second. The problem with high temperatures is the loss of soil moisture to evapotranspiration leaving little for native vegetation to use. Add in a hot desert wind and the situation becomes even worse.

For Loy Guzman, school superintendent/principal/teacher of K–8 students, the weather station will provide her 12 students with a new focus on science. She chose her two oldest students, seventh graders Evalynn Roberts and Weston Strickland, to man the station and record the data.

Roberts said they record the temperature, wind speed, humidity and rainfall three times a day and send it to Portal resident Howard Topoff, animal behavior PhD, who posts it on his website.

Since the station was installed in July, only 1.2 inches of rain fell, added Strickland.

Guzman explained the weather station was just one of the new focuses of the children’s education.

A small new greenhouse was completed thanks to a grant and the students plan to grow herbs to sell in Portal, she added.

Then there’s the new birding pond provided through another grant constructed by Anna Grossman, the bus driver. The plan is to plant Texas sage, lavender and other flowering plants to attract birds and butterflies for the students. And there may be some goldfish in the future for the students to enjoy as well.

Pecan trees were planted along the edge of the playground to provide needed shade and some nuts when they mature.

For security, a one–way reflective film was added to the schoolhouse windows. Though the school yard is fenced in and locked, the film provides an extra level of security. Anyone trying to see in the school only sees their reflection, but she and the students can see out and can contact the Cochise County Sheriff’s Office by radio without having to rely on cell phone signals or landlines.

A new floor was also installed in the school.

Coming back from the COVID-19 shutdownAs children in masks let off some steam on the playground, Guzman said the students were doing well with keeping on their masks, especially the kindergarteners. “They have their masks on all day.”

To keep the children safe and prevent potential exposure, Guzman keeps them in family groups.

“They can take off their masks while they’re together,” she continued. “It’s just a level of protection we can do here.”

Social distancing is no problem either.

“They wanted to come back to school,” she emphasized. “They were so happy when the school opened.”

Apache Elementary has in person, full day classes which was a decision made by Guzman, assistant teacher, substitute teacher and maintenance guy Frank Zepeda, Grossman and the parents.

“We went by the Centers for Disease Control and Prevention and the state health department guidelines,” Guzman added.

After a glimpse of her watch, Guzman called the students back to class and they came running, breathless and ready to get back to work.