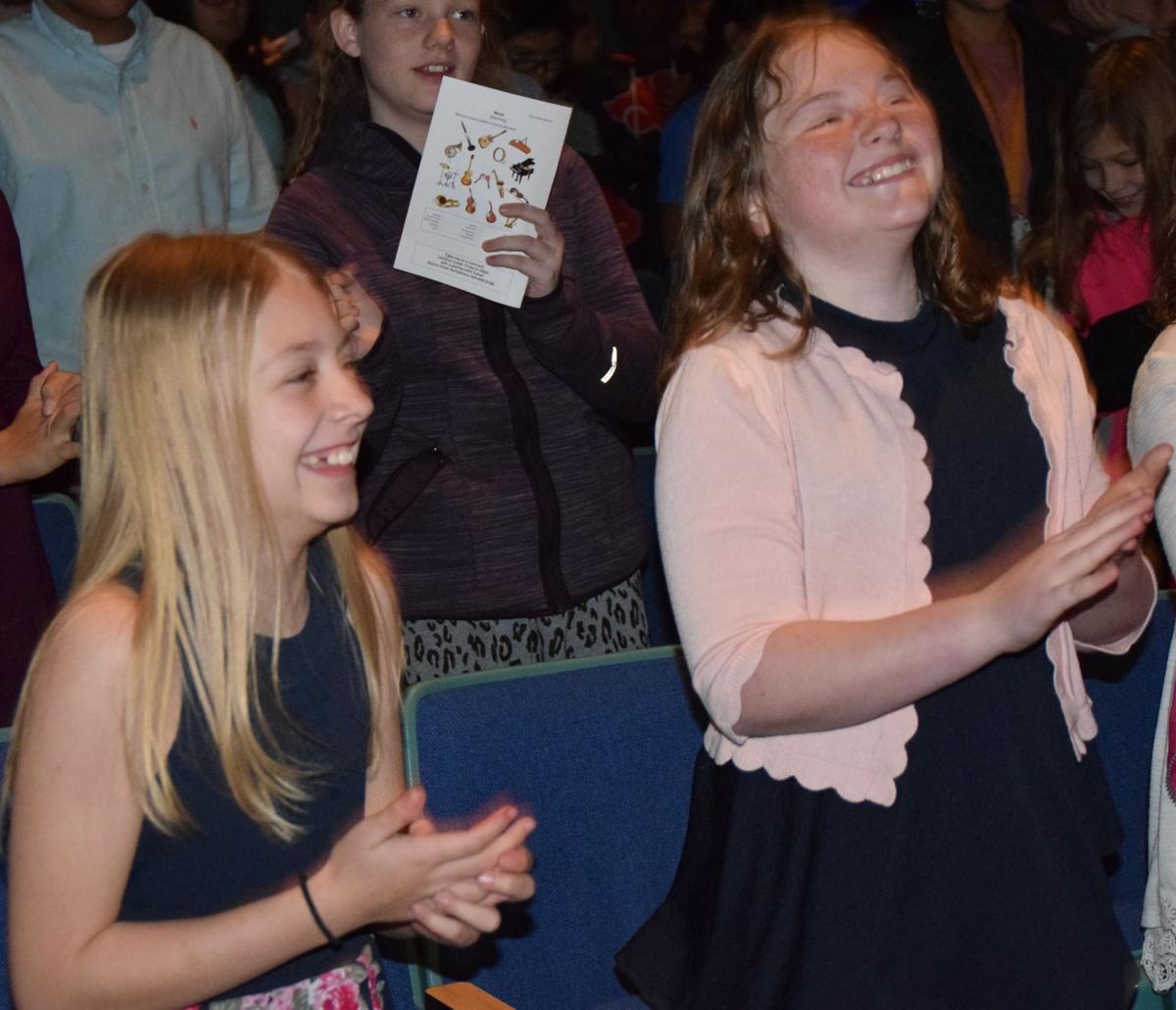 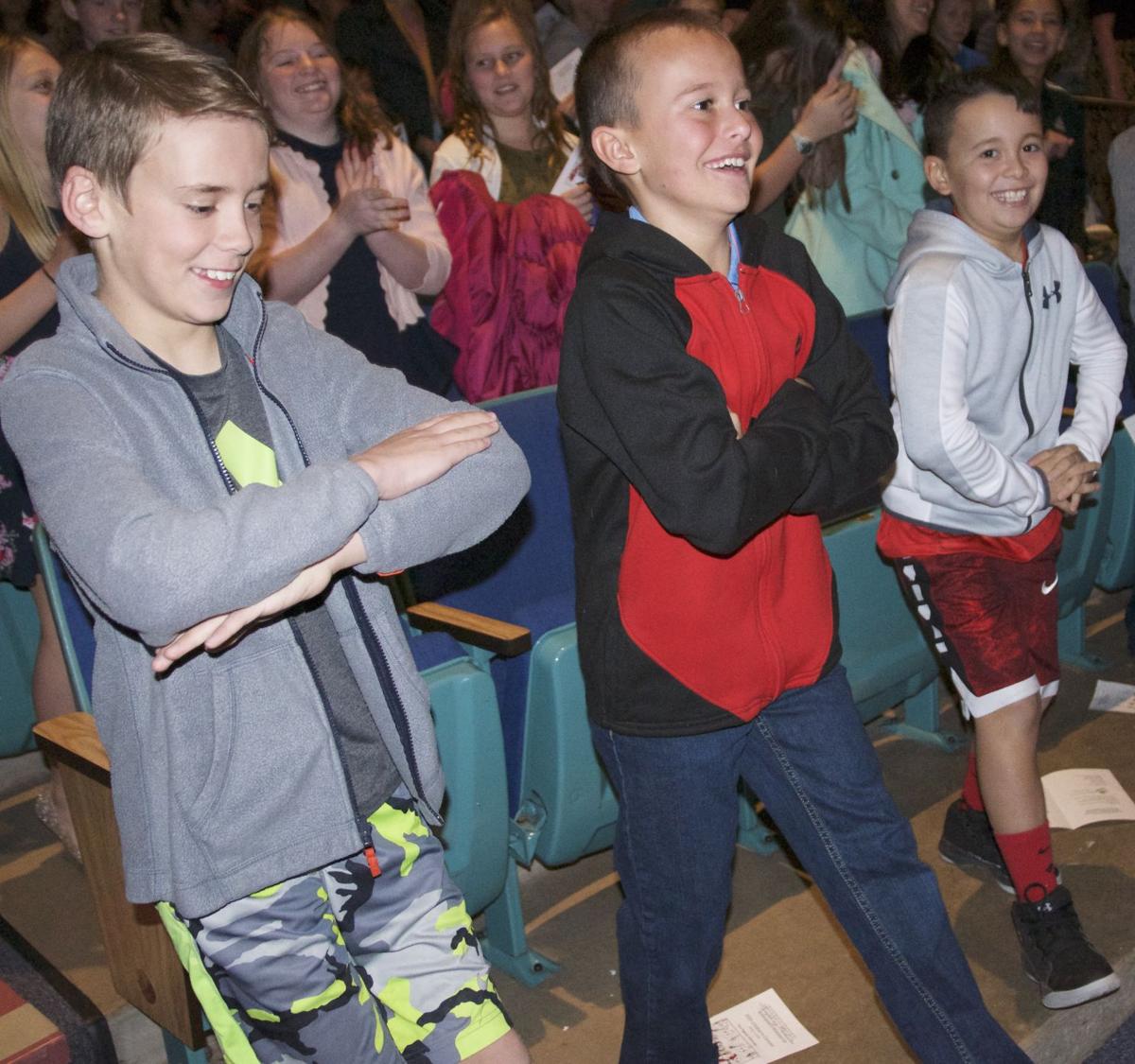 Denielle Eliason, harpist for the Sierra Vista Symphony Orchestra, says one of her greatest joys as a musician is performing for the annual children’s concert.

“This is my tenth season with the symphony, and it’s so much fun performing for the children. Their reactions are priceless,” Eliason said.

Every year, fifth-graders from across Cochise County and schools in neighboring Santa Cruz County are invited to a free concert, complete with the full orchestra, conducted by Toru Tagawa.

Nearly 1,000 children were transported to Buena High School’s Klein Center for the Performing Arts in two different sessions last Friday to hear the orchestra, learn about different instruments and meet the symphony’s conductor.

“I’ve been a Sierra Vista Symphony supporter since I moved here in 2011, but this is the first time I’ve taken a class to one of the concerts,” said Huachuca City School fifth-grade teacher Camille Call.

“The concert was a wonderful experience for the children, something everyone should be able to experience at a young age,” said Call, who added that feedback from her students after the concert was “very gratifying.”

“They were so excited about actually seeing the instruments and the musicians who played them.”

Through pre-symphony classroom visits from Kathy Marvin, a retired elementary music teacher who chairs the Sierra Vista Symphony Education Committee, students learn about different instruments, the composers featured at the concert and the role of the conductor.

“Those visits give students valuable background about the concert ahead of time and do so much to ramp up their enthusiasm,” said Call, who took 25 students to Friday’s performance.

Marvin started visiting classrooms in Cochise and Santa Cruz counties early last month and continued the visits through Jan. 9, the day before the children’s concert. Those music education presentations take her to public, private, charter and parochial schools.

“Along with bringing different instruments and pictures of the composers and conductor, I also bring a world map to show that music is a universal language,” she said.

“The reason I do the classroom visits is because there is no longer music education in most elementary schools, and that’s tragic,” she said. “We’re going to have a whole generation of elementary students who do not have a background in music education, which is an important lifetime skill they acquire at a young age.

“Statistics show that children who have music and art education are in the top 10 percent of their graduating class.”

While free for school children, the concert costs the Sierra Vista Symphony Orchestra Association more than $20,000, said Marvin, who noted that the association raises the money through donations, sponsors and grants.

Despite the high price, educators and those who are passionate about music education feel the concert is an important experience for young people.

“I play the piano, but this is my first symphony concert,” said 10-year-old Kailey Pacheco. “I really loved it, especially the ‘Waltz of the Flowers’ and the ‘William Tell Overture.’ I wish we could come again next year.”

Eleven-year-old Ella Fernandez, a Center for Academic Success student, was excited about being able to talk to Symphony Conductor Tagawa prior to the concert’s start.

“He was really nice. I told him my favorite instrument is the violin, and he told me that’s what he plays,” she said. “We talked about the different instruments I was going to see during the concert.”

Another CAS student, 11-year-old Carlos Aponte, said his favorite instruments are the harp, violin and clarinet.

Every year, it’s the concert’s grand finale, “The William Tell Overture,” that brings children to their feet, dancing and clapping to the music while conductor Tagawa bounds through the performing arts center.

“For many of these kids, this is the first time they’ve seen a live symphony,” Tagawa said. “We want to make it a fun, lasting experience for them.”

Selections from Pyotr Tchaikovsky’s “The Nutcracker” (1892)

Selections from Modest Mussorgsky’s ‘Pictures at an Exhibition (1874)