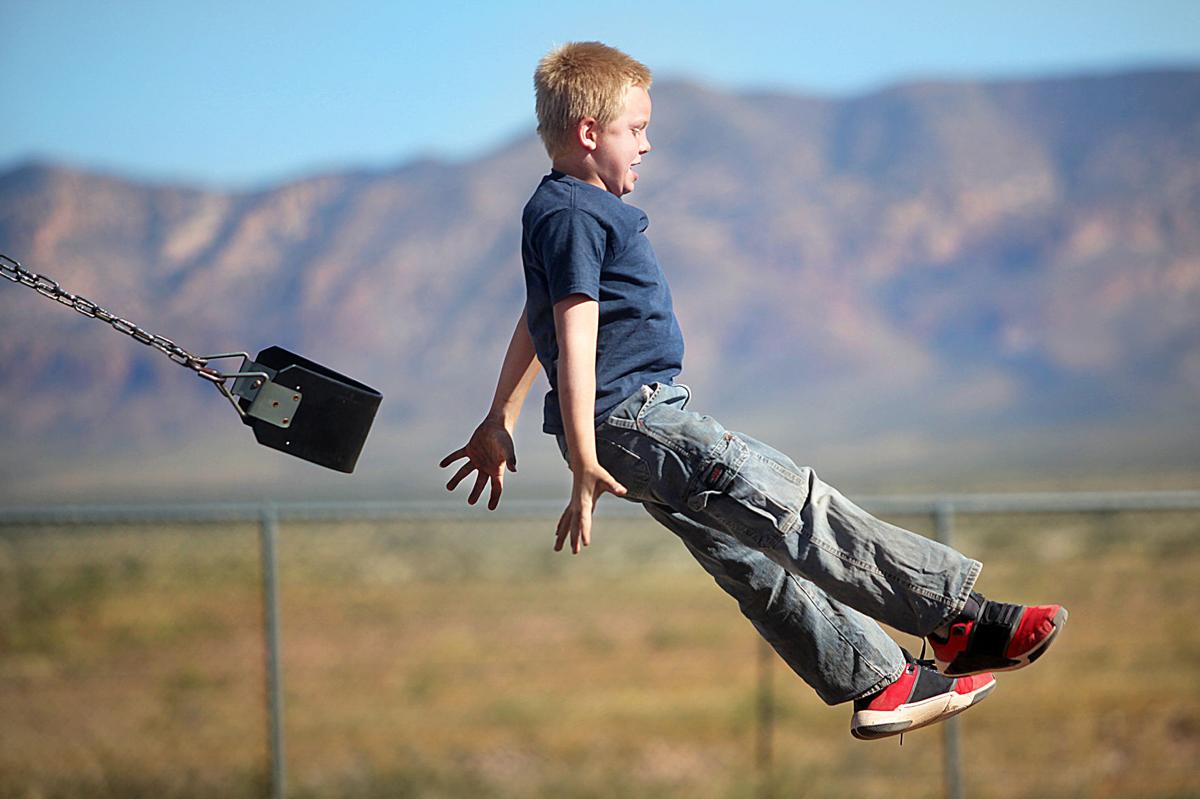 Apache Elementary School third grader Nick Phillips puts the school playground to good use last week. The school has been open since 1910. 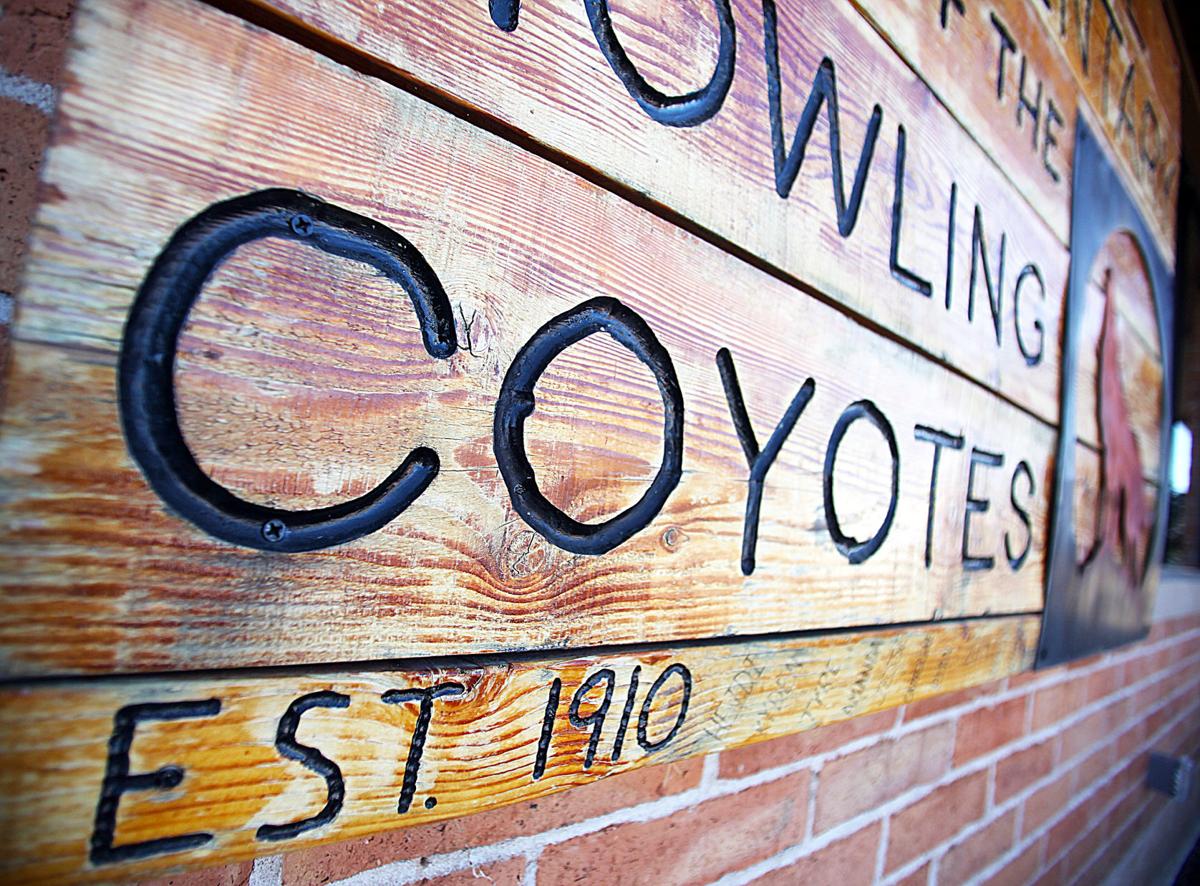 Apache Elementary School has been open since 1906 and officially established in 1910. 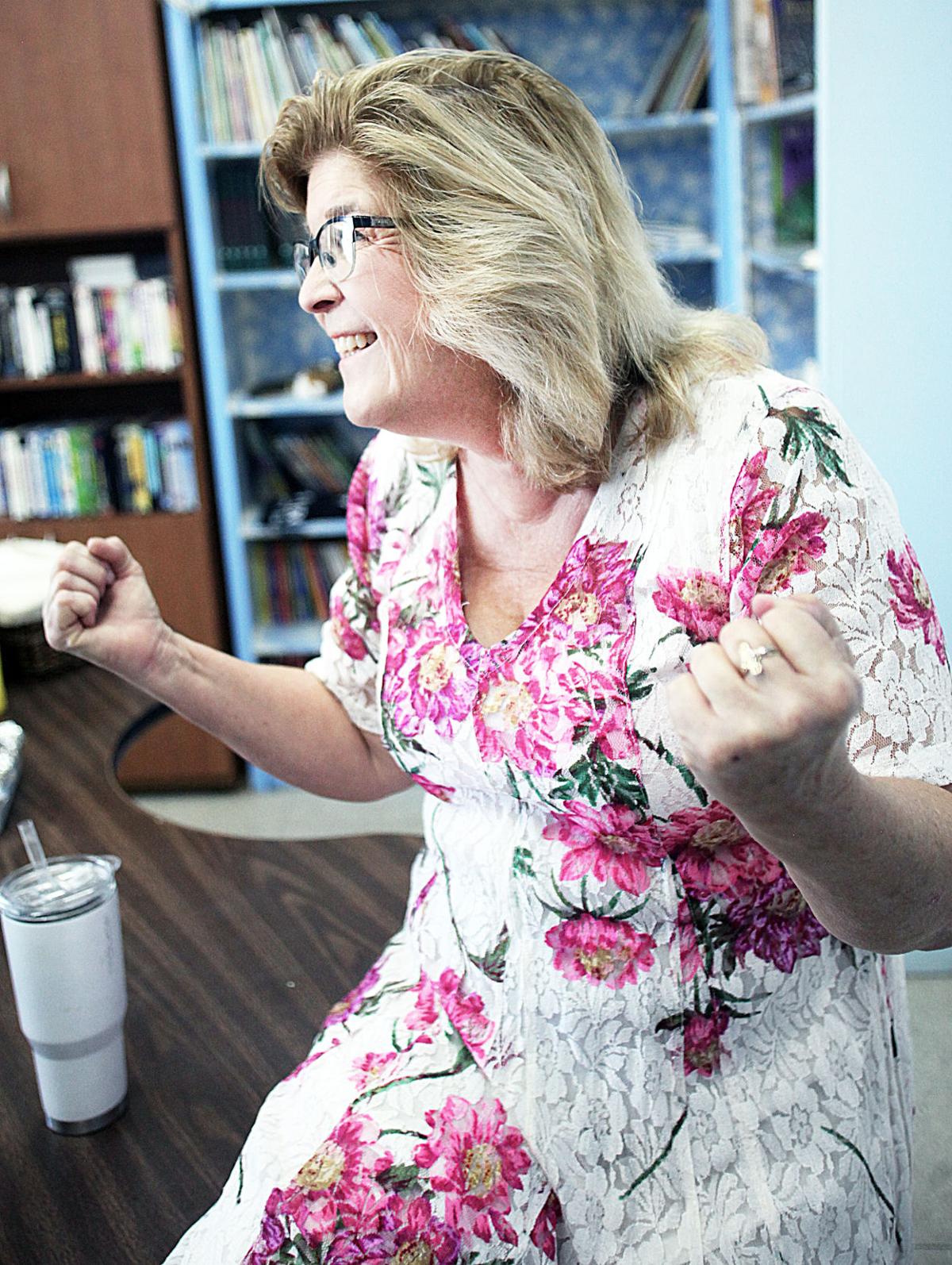 Loy Guzman excitedly talks about Apache School last week. Guzman teaches grades K-8 and is the district superintendent as well as the principal. 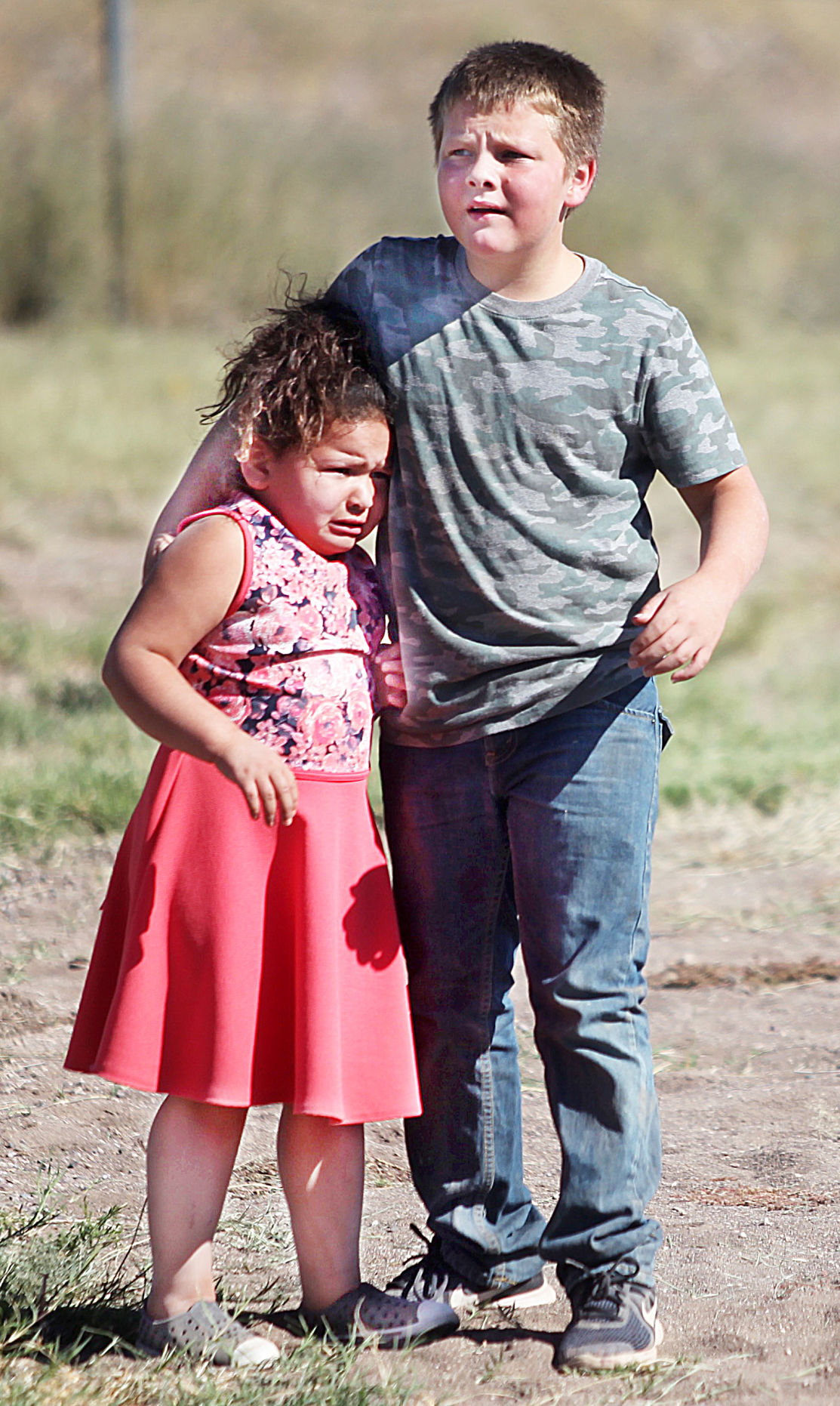 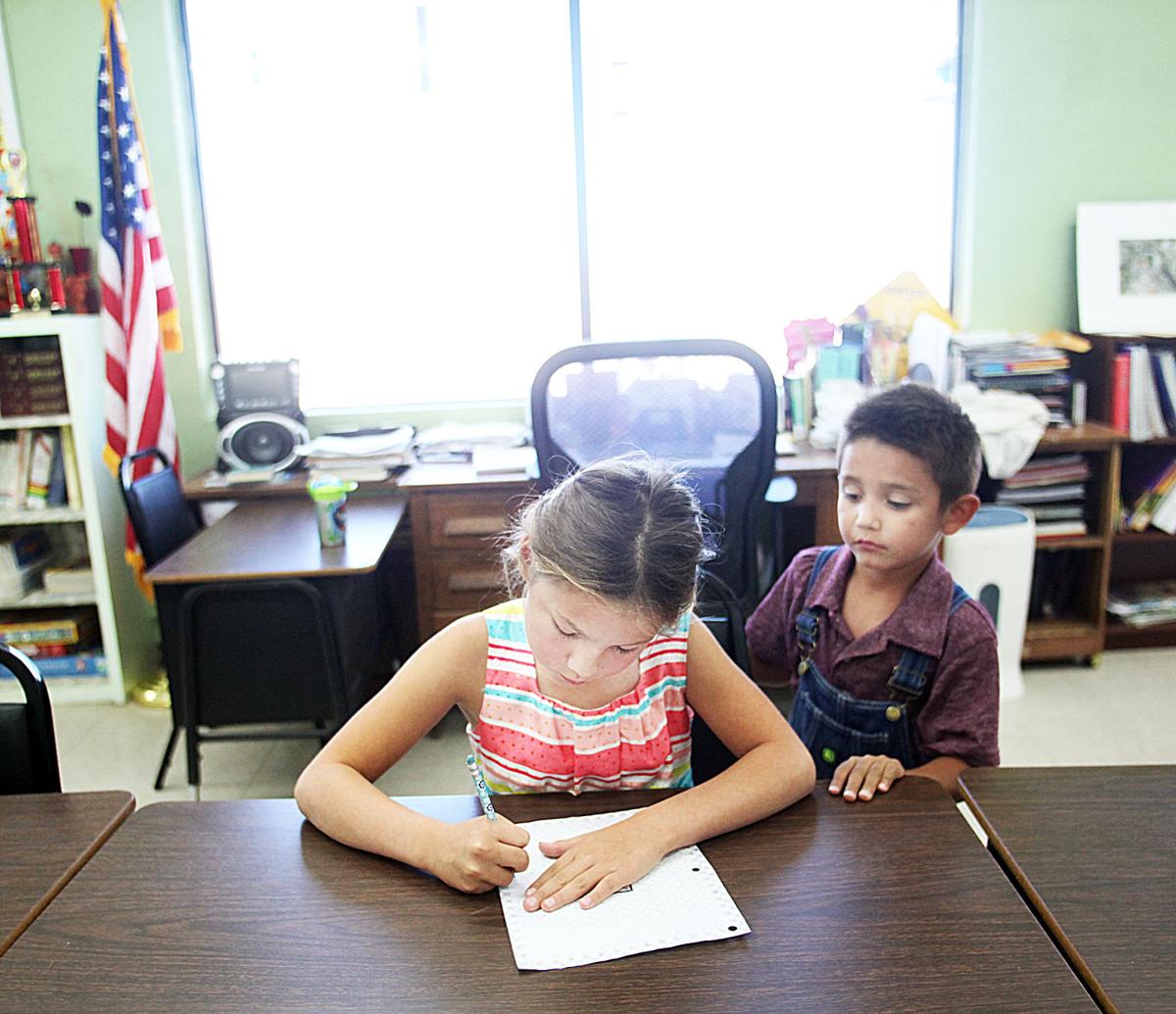 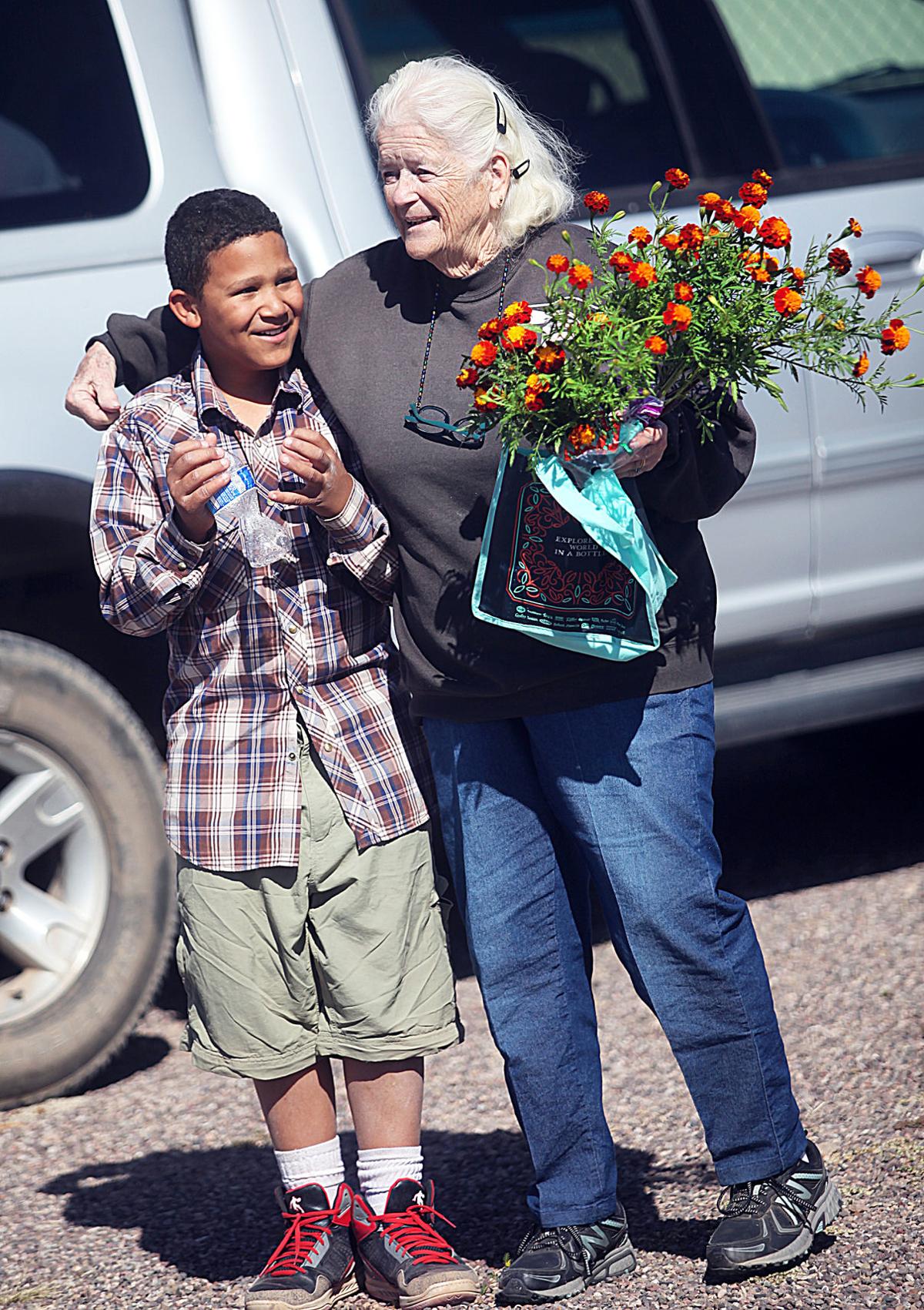 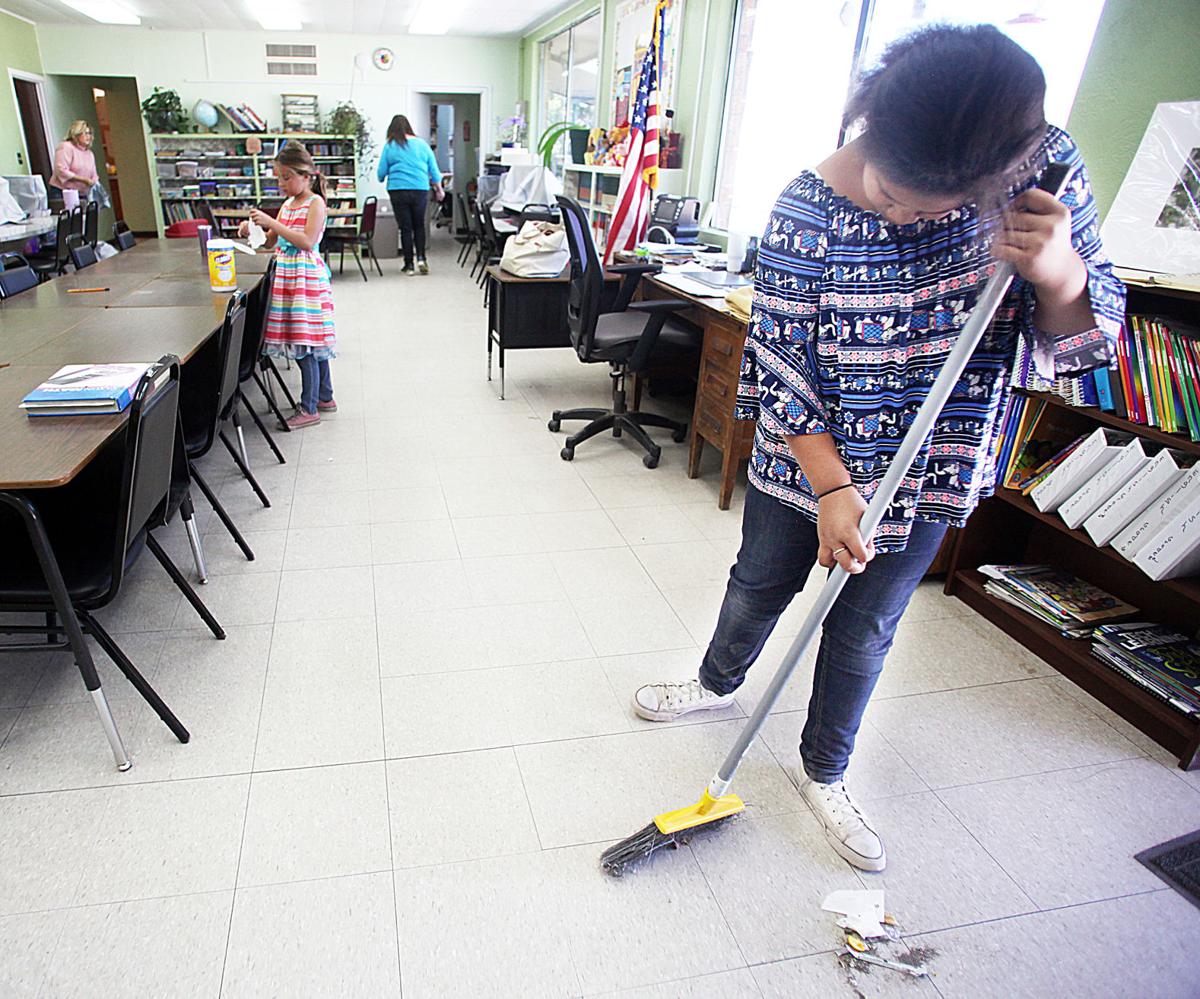 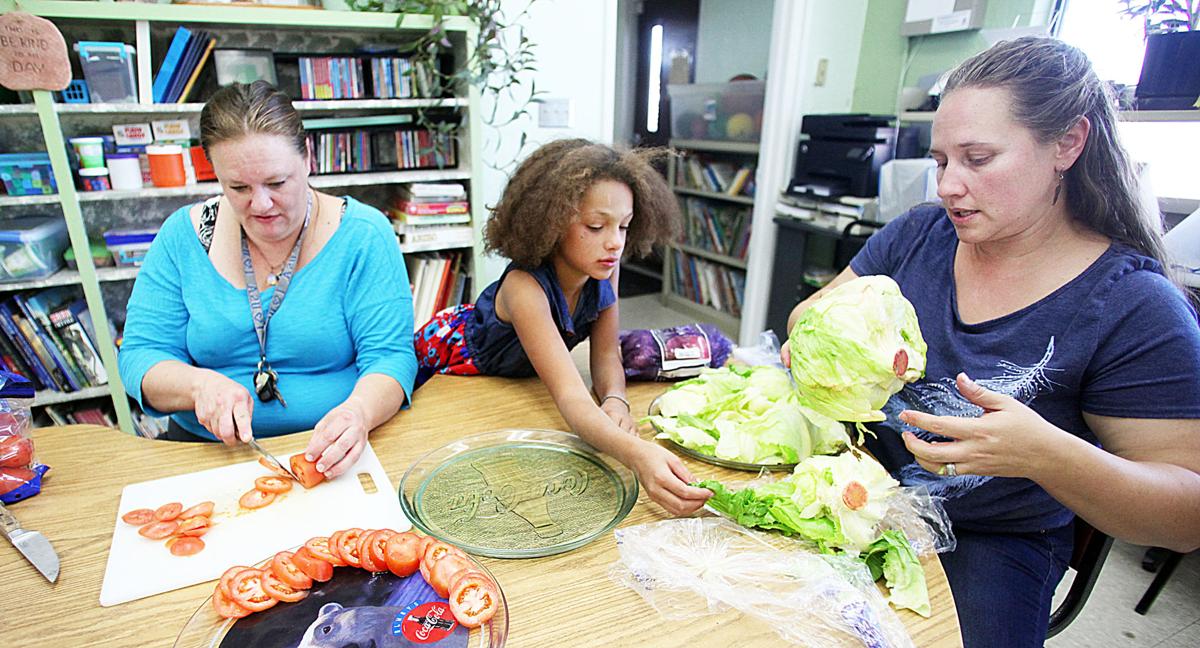 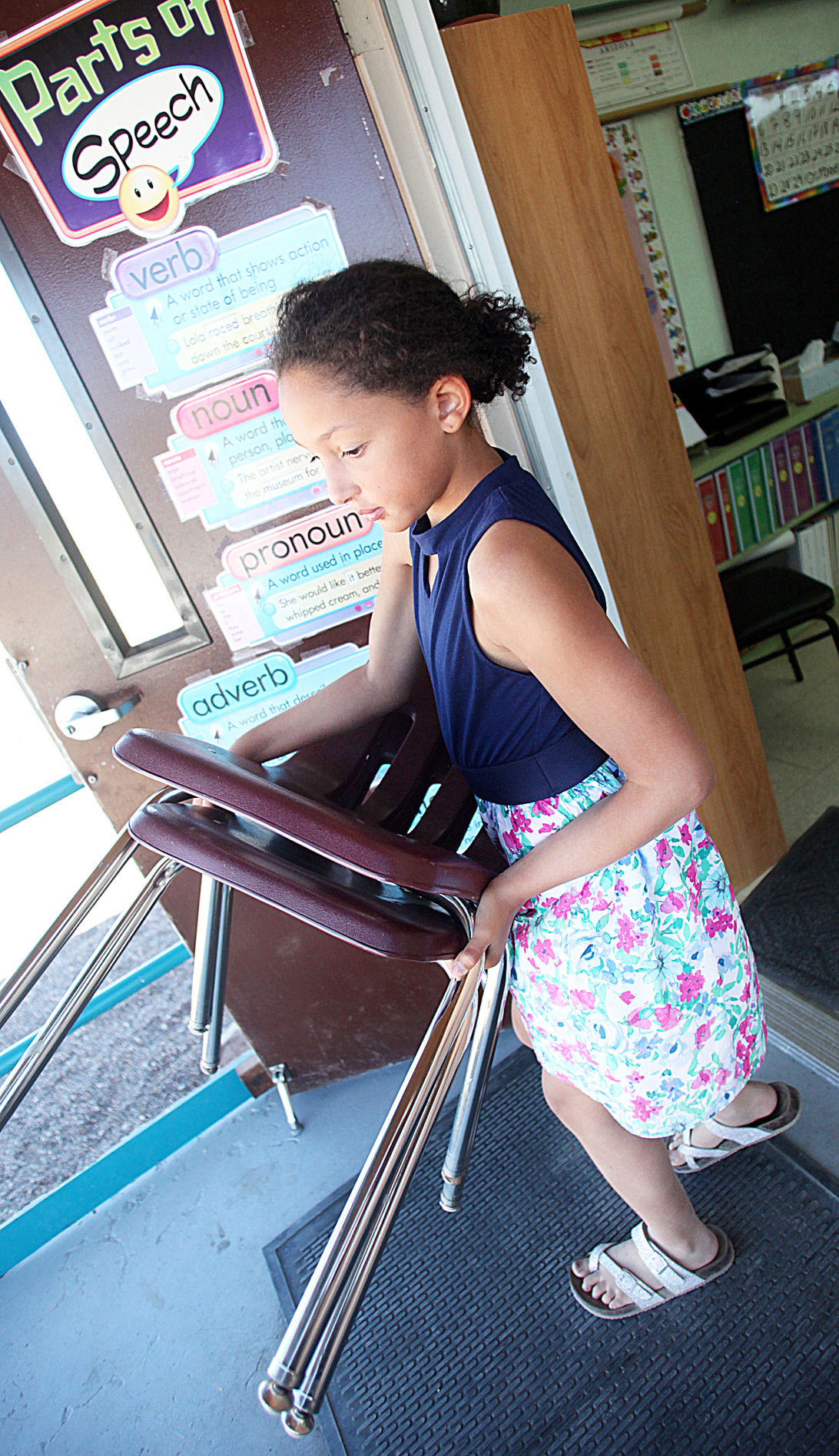 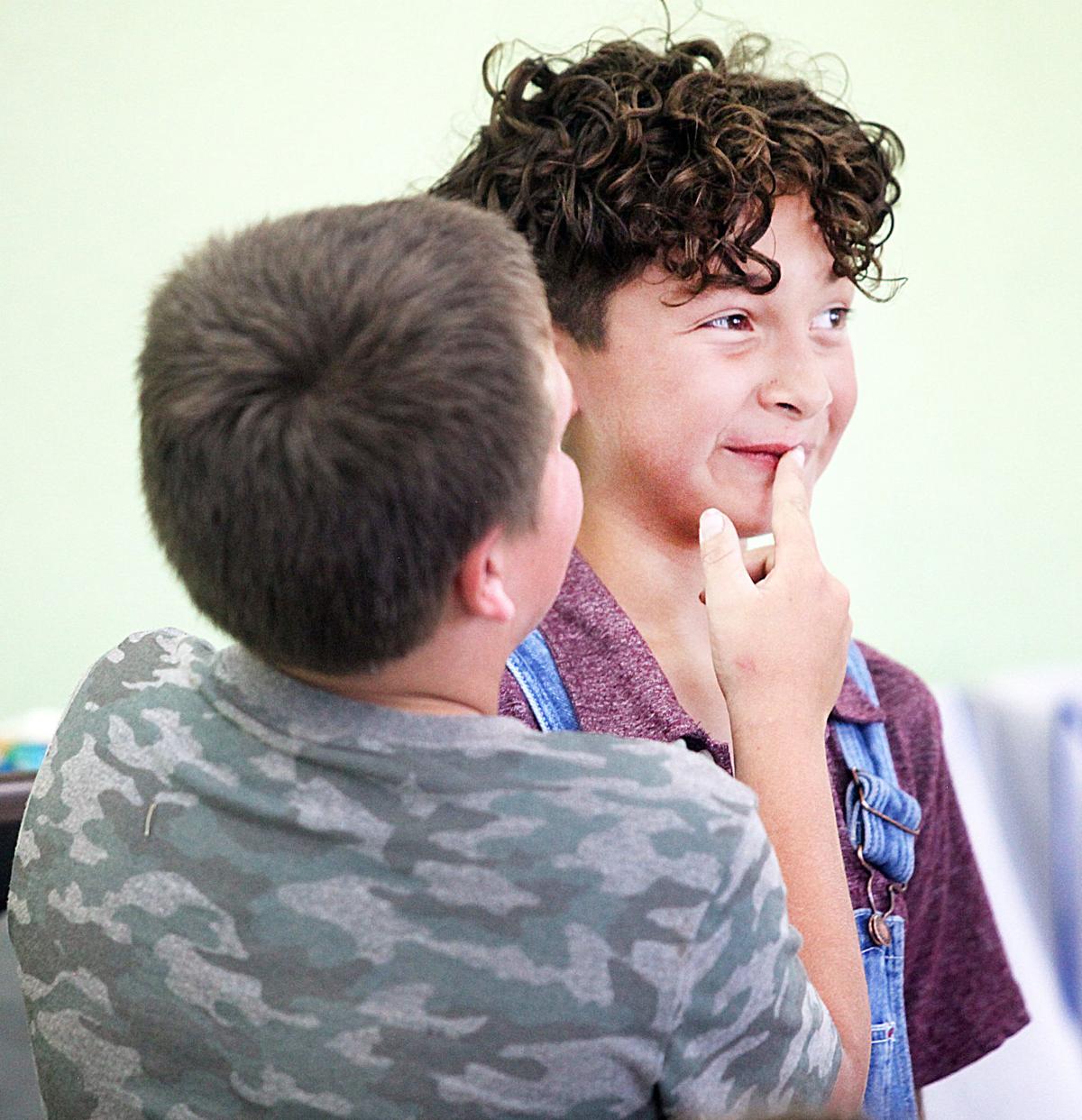 Jessy Gonzalez, third grade, clowns around with a fellow student prior to last week’s open house. 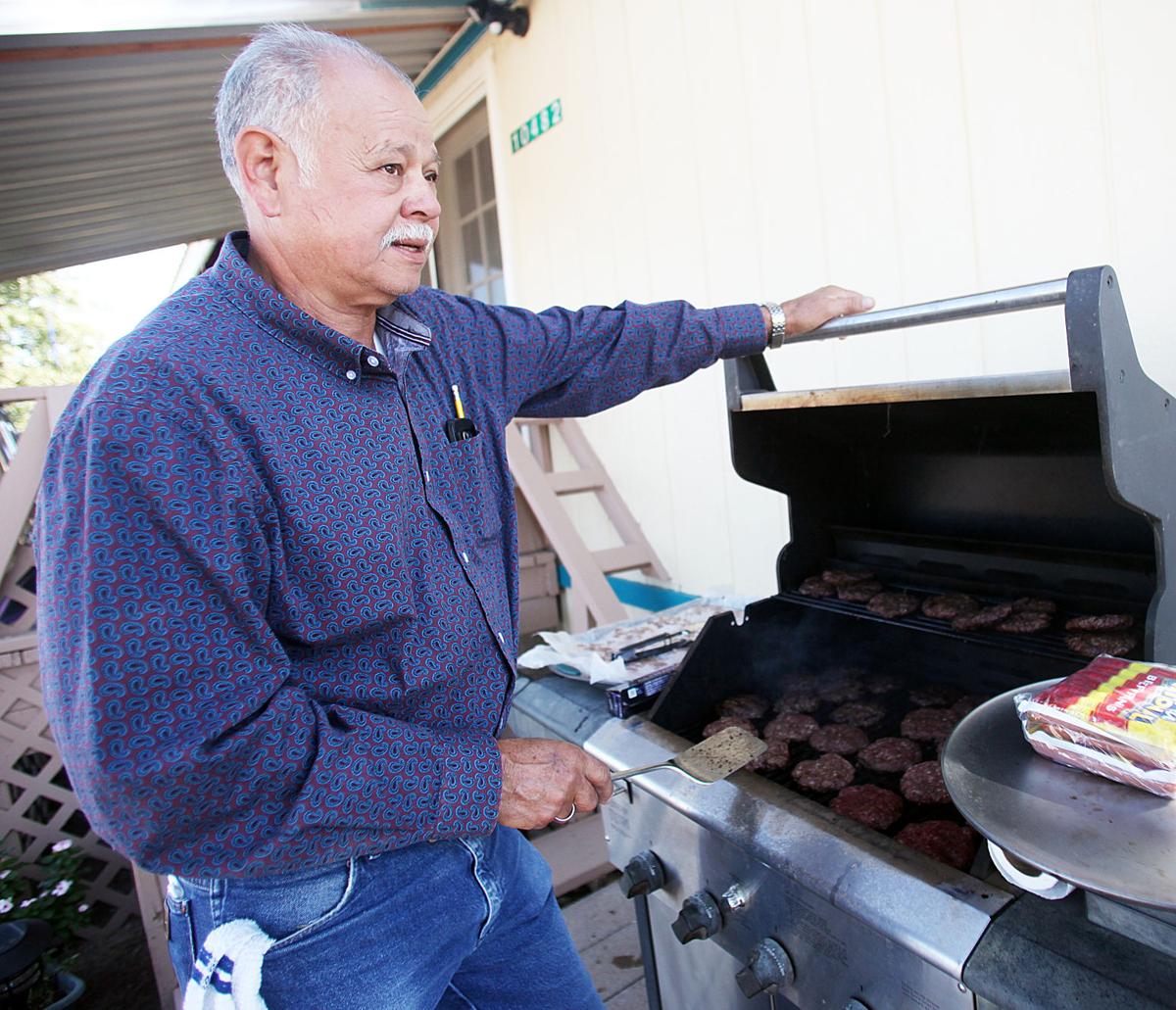 Teacher’s aid Frank Zepeda grills up some food for last week’s open house in Apache. Zepeda said he was a student at Apache Elementary School in 1960.

Apache Elementary School third grader Nick Phillips puts the school playground to good use last week. The school has been open since 1910.

Apache Elementary School has been open since 1906 and officially established in 1910.

Loy Guzman excitedly talks about Apache School last week. Guzman teaches grades K-8 and is the district superintendent as well as the principal.

Jessy Gonzalez, third grade, clowns around with a fellow student prior to last week’s open house.

Teacher’s aid Frank Zepeda grills up some food for last week’s open house in Apache. Zepeda said he was a student at Apache Elementary School in 1960.

APACHE — Taking advantage of the afternoon off from school, a group of five students were tossing a football around while others ran about playing or helping the “staff” of Apache Elementary School (AES) prepare the tables for the Open House with parents, friends and community members.

At AES, a one-room school just a few miles from the Arizona-New Mexico border, staff consists of one teacher’s aide, a bus driver and a business manager — and one woman who acts as the teacher, the principal and the school superintendent, Loy Guzman.

Teacher’s aide Frank Zepeda went to Apache in the 1960s when the school was new. After retiring from APS, he decided he wanted to help out at his old school and makes the drive from Douglas to Apache Monday through Thursday and provides a lift for a Douglas student who chose AES, rather than one of the schools in the city.

“We are successful because everyone cares,” Zepeda said. “The parents and the community are very supportive.”

By community, he not only means Apache, but Portal, Cave Creek and Rodeo, N.M. The community stretches from the border with Mexico north and east to the upper reaches of the Chiricahua Mountains.

And the community came forward in strength when Cochise County School Superintendent Jacqui Clay was faced with closing the school district down a few years ago, after over 113 years, due to lack of public support. There was a problem finding volunteers to serve on the school district board.

Then came Guzman. She made the trip to Bisbee and talked with Clay about the situation, to change her mind about closing the school.

“I fell in love with the kids,” Guzman said in a recent interview with the Herald/Review. “I thought I wanted to be a Certified Public Accountant in college, but I changed my focus to kids. I wanted to help children with special needs and I worked at San Simon. I really liked the rural feel and the one-on-one interaction and parent involvement.”

Clay told her the district, which had been split between two factions, needed to be brought back together.

“She told me, ‘I want the community to come together on this.’ So, we met and decided to do what was right for the kids,” Guzman said.

Clay believed Guzman was up to the challenge to teach students K-8 all in one classroom, to perform the administrative tasks as the principal, serve as the district school superintendent and unite the community. She was hired and provided a modest home, right next to the school.

Together, they managed to reconcile community rifts. After parents, family and community members threw their full support behind one of only four remaining one-room schools in the state, AES has flourished educationally, not to mention socially and emotionally.

“Having Ms. Clay as a supporter meant everything to us,” continued Guzman. “And, my kids know what she has done for them. They always ask about her when I go to a meeting in town. They know she supports everything they do, too.”

She is using characters from Winnie the Pooh to guide the children into recognizing their own traits and those of their peers. Talking about friendship, caring, and being sad gives kids a fun way to be honest about their feelings and understanding the different feelings that come from problems.

How does she handle teaching the different grades? The way she explains it, that’s what makes AES so special.

“While I’m working with the younger kids, we start with the basics,” she said. “Then, I’ll move to the next grade and discuss subjects which though more advanced, actually keep their attention and they all learn together.”

The smiles on her students faces and their joy of learning and cooperating by all working together as a team is a testament brought about by the support of a tireless educator and community members who volunteer their time whenever possible.

Guzman’s mother Joan Jensen helps at the school after she closes up shop at the Portal Post Office, where she has worked for 40 years.

She smiles and greets them with a hug. “I’m everybody’s grandma,” she laughs.

But it hasn’t been easy.

“It was hard to pull this together,” she said. “At first, I didn’t know what I was getting into.”

One might think certain portions of the curriculum would be forgotten, like art or music, but those are covered by local musicians and artisans who volunteer time at the school.

And field trips? They go on field trips to Tombstone, Bisbee and beyond when they can.

Those trips can also be to take rocks they painted up into the Chiricahuas to leave along the trail for hikers to see, help clean up the Apache Cemetery, or pick up garbage along the road.

They also make wreaths from natural resources which are sold at a local gallery.

“We want the kids to interact with the residents. It’s important for them to give back,” Guzman said.

“I think I left a centipede in my backpack,” announced Westin Strickland, a 12-year-old bug enthusiast as he raced to a back room. He retrieved it and showed the wiggly bug inside a prescription bottle to Guzman. “It’s still alive. It’s OK.”

Strickland captures bugs for entomologists who pay him money for the multi-legged critters for research.

“He’s always bringing something to school,” she smiled.

Guzman gives considerable thanks to the parents, family members and community members who donate snacks, books, and money to help pay for the field trips.

Help with nutrition is also important, given Apache’s demographics. The school does not have a cafeteria, so students need to bring their lunches with them. The school can keep them cold or warm them up in a microwave. If a student does not have a lunch to bring, Guzman manages to help them out and make sure they get something to eat.

Brandy Roberts, head of the informal parents’ group, has three children in AES and believes it is the best place for them. The family feel of the school is a draw and a comfort.

Cochise County Sheriff Mark Dannels provided the school with a phone to connect them with law enforcement if it is ever needed.

“We haven’t used it yet, but it’s comforting to have it here. We appreciate what he has done for us,” Guzman said.

Repairs and maintenance for the 50-year-old building are are always a financial hurdle. And, keeping up with the needs for students — books and supplies — can be difficult. In order to meet those needs, state and federal grants are a must.

Along with her other duties, Guzman finds the time to fill out the applications and waits on pins and needles to find out if AES was awarded them.

The playground is a big concern as the metal structures are as old as the school building and in need of replacement. Four pecan saplings rise from plastic tubes to protect the trunks from insects, rabbits and deer.

During a recent open house, burgers and hot dogs were grilled under the watchful eye of Zepeda. A serving table filled up with home cooked side dishes and deserts. Parents filter in, greeting each other and their children.

“They say it takes a village,” Guzman said fondly. “That’s true. Without the help of our families, friends and neighbors, we wouldn’t be able to do what we do. I thank them constantly.”

Located in the high desert of Southeast Arizona, between the Peloncillo and Chiricahua Mountains, lies Apache Elementary School. One of four remaining one-room schools in the state, Apache Elementary provides K-8 education to the children of ranchers, farmers, and others in this sparsely populated area of Arizona.

Apache Elementary School exists to provide quality educational experiences for this community’s children. The school staff and the Board of Education work together to define and implement quality educational practices. We are ever mindful that this school exists for children. Its purpose is to provide opportunity for children to develop skills necessary for productive lives. It is our mission to so arrange the school organization, its structures, rules, procedures, policies, and course of studies so that each child can learn at his or her maximum rate.