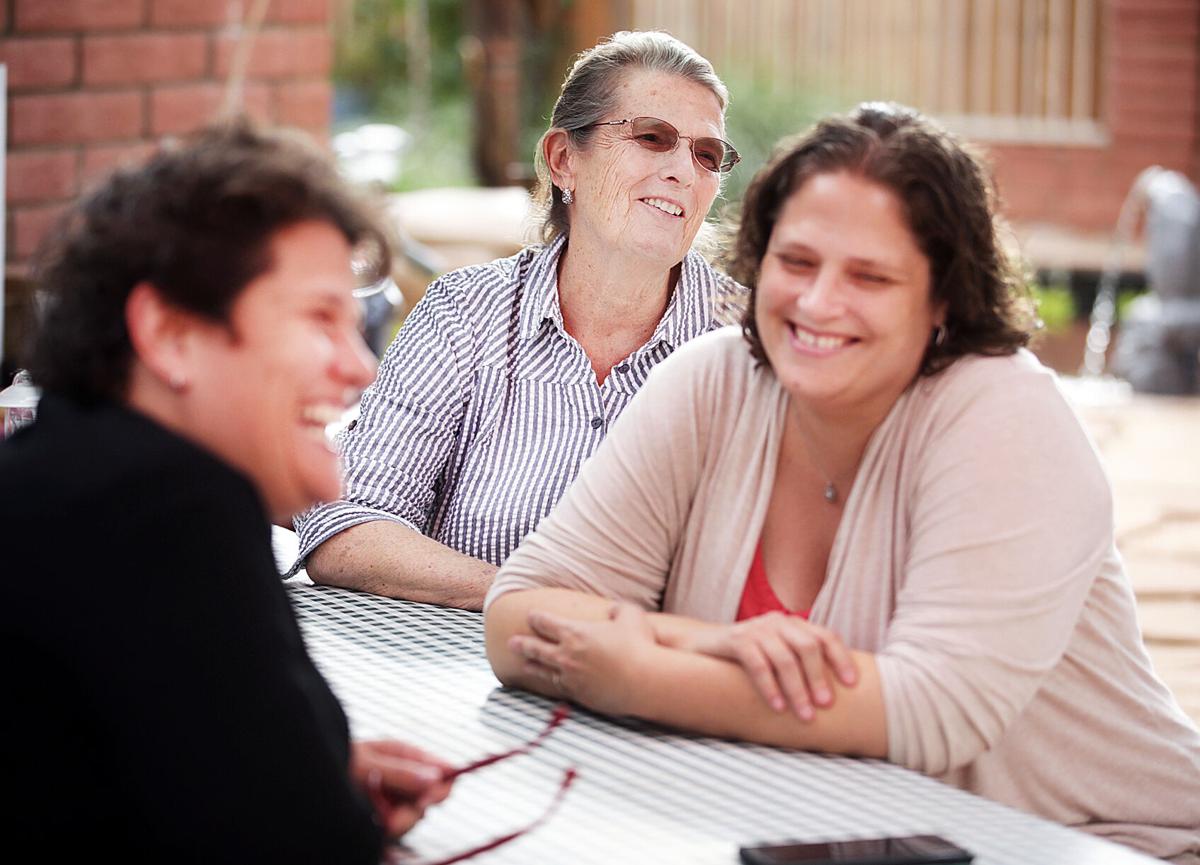 Margaret Klein, center, and daughters Carrie Duerk, left, and Meghan Thomas share a laugh while reminiscing about Rick Klein, who recently passed away. 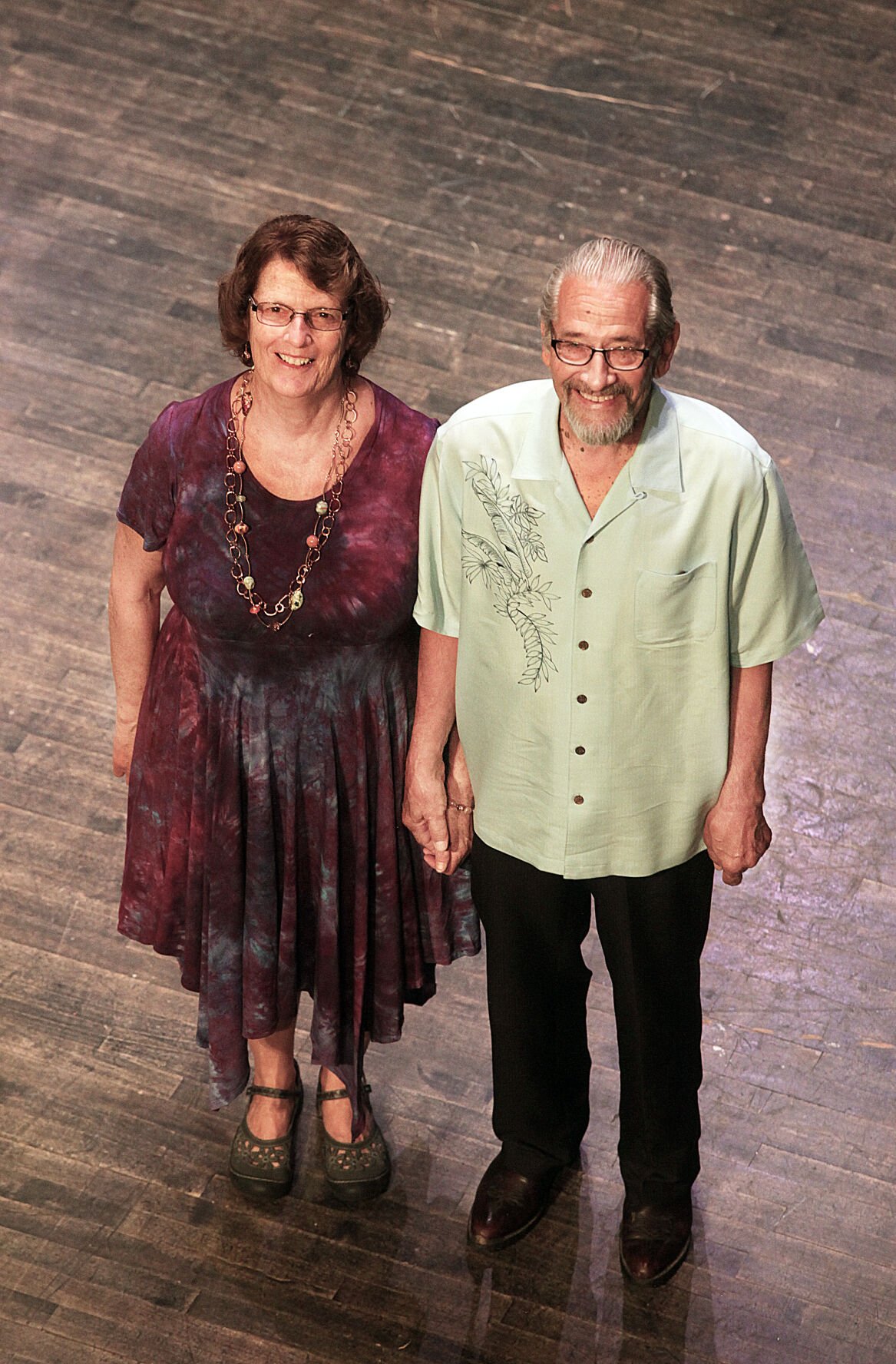 Margaret and Rick Klein stand on the Buena Performing Arts stage two years ago. The theater was renamed the Klein Center for Performing Arts. The Kleins worked for the Sierra Vista Unified School District for a combined 97 years. 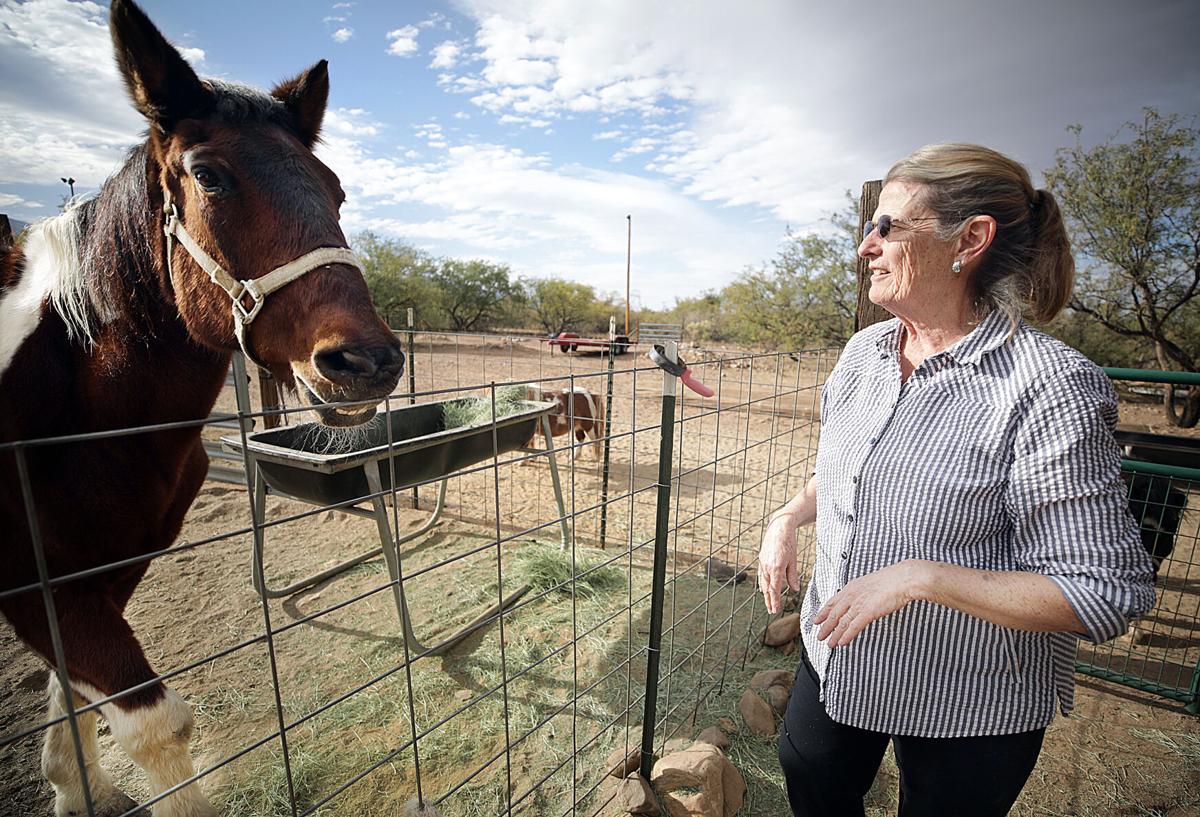 Margaret Klein with one of her horses last week at her Hereford home. 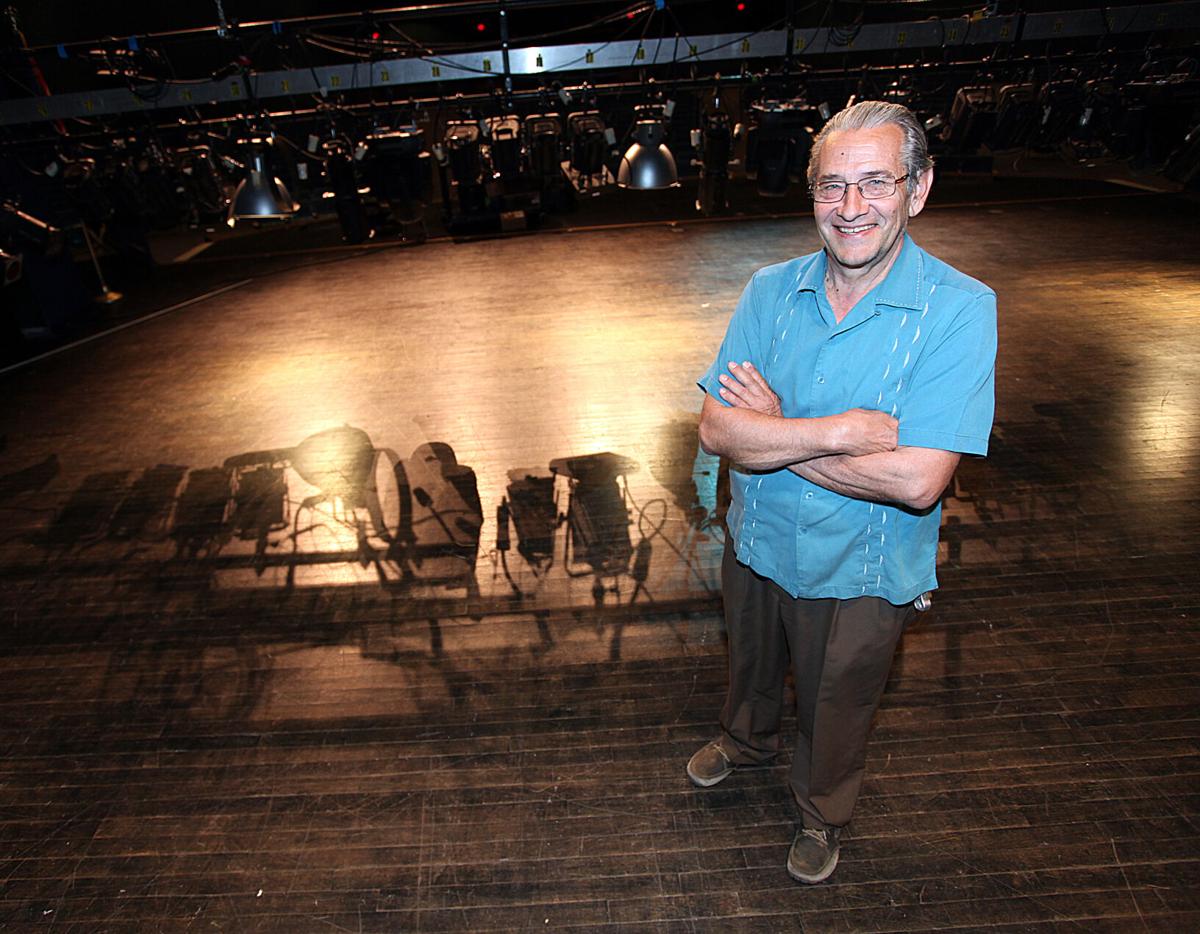 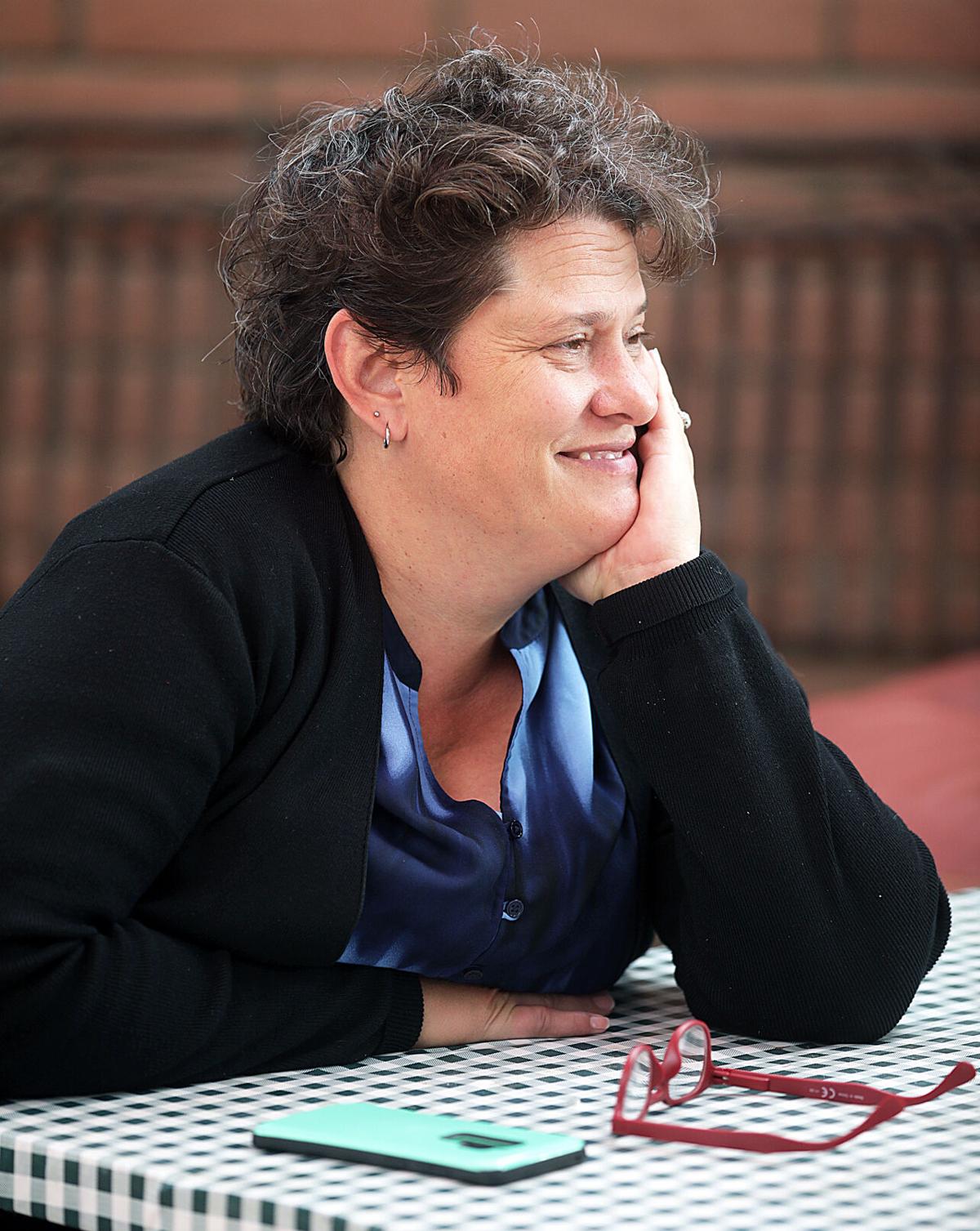 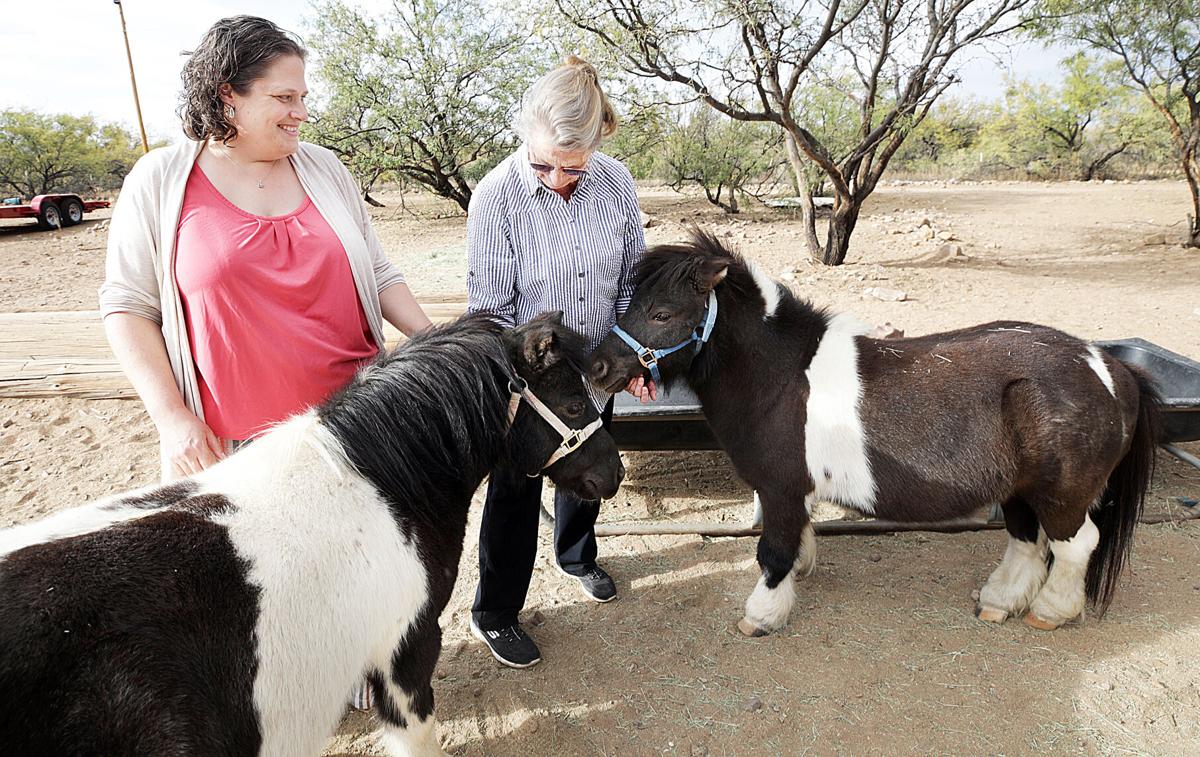 Meghan Thomas joins her mother, Margaret Klein, as they interact with some of the family’s miniature horses. The mini horses were Rick Klein’s, which he loved and cared for.

Margaret Klein, center, and daughters Carrie Duerk, left, and Meghan Thomas share a laugh while reminiscing about Rick Klein, who recently passed away.

Margaret and Rick Klein stand on the Buena Performing Arts stage two years ago. The theater was renamed the Klein Center for Performing Arts. The Kleins worked for the Sierra Vista Unified School District for a combined 97 years.

Margaret Klein with one of her horses last week at her Hereford home.

Meghan Thomas joins her mother, Margaret Klein, as they interact with some of the family’s miniature horses. The mini horses were Rick Klein’s, which he loved and cared for.

SIERRA VISTA — During his 48-year career as a Sierra Vista Unified School District music educator, Rick “Coach” Klein touched thousands of lives through his love of music and passion for the students he inspired.

Last Friday, Klein died in the comfort of his Hereford home at age 74, surrounded by family.

When news of his passing appeared on Facebook, hundreds of people — former students and co-workers, friends and acquaintances — responded to the post, with students sharing fond memories of the teacher they refer to as “Coach” and hailing his career as a legacy.

Rick and his wife Margaret, also an educator and fine arts enthusiast, shared 97 combined years with Sierra Vista Unified School District. In September 2018, Buena High School’s Performing Arts Center was renamed the Klein Center for Performing Arts in a rededication celebration that paid tribute to the couple and their far-reaching contributions to Sierra Vista’s music and theater programs. The tribute, which packed the performing arts center, drew hundreds of former students from all over the country, as well as those who were enrolled in the school’s music programs at that time.

“I became part of the Buena High School band in 1974 as a tuba player, and I was the drum major for two years,” Huffman said. “Coach not only had a gigantic influence on my life, but on the lives of thousands of young people he inspired through his career. I would not be the person I am today had it not been for Coach.”

Huffman also spoke of Klein’s time in the 36th Army Band when he toured Vietnam in 1968-69 while performing at different venues throughout the country.

After his tour in Vietnam, Klein left the Army and returned to Sierra Vista where his wife, Margare, was teaching first grade at Carmichael Elementary School. Klein was hired by the Sierra Vista School District in 1970 as an elementary and junior high school music and band teacher, positions he held prior moving to Buena High School.

“Coach was an incredibly gifted trumpet player who could have gone anywhere in the world,” Huffman said. “Instead, he chose to stay in Sierra Vista where he educated thousands of students, infusing them with his passion for music. Along with that, he taught all of us the importance of giving back. That’s by far the greatest lesson he taught us — even greater than the music he loved so much.”

Another one of Klein’s students, Sally Pudlo Chavez, shared memories of her time as a member of Buena’s band. A 1978 graduate, Chavez participated in marching band, concert band and as a “roadie” for the show band.

“I played piccolo in marching band and bassoon in concert band,” she said. “I absolutely loved my four years of band, and I loved the Kleins. Coach was the most humble, unassuming person I’ve ever met.”

Chavez stayed in contact with the Kleins after she graduated.

“Both touched the lives of thousands of people and were amazing mentors to all of us,” she said. “When I think back on my high school years, I think of my time in band. I think of all the traveling we did, the amazing opportunities we shared and the way Coach made the band feel like family.”

Chavez served as chairperson for a show band reunion in 2011, an event that drew alumni from all over the country, with representation from multiple decades that started in the ‘70s and extended through 2010.

“That event, and the extraordinary participation it received, is testament to how Coach inspired so many of us and created lasting memories,” she said.

Former Buena Band Director Duane Chun, now the school community facilities manager, worked with Klein for 25 years. His relationship with “Coach” actually started the summer of 1979 when he arrived at Buena as a high school junior.

“I went from student, to mentee to colleague with Coach, and had an incredible 25-year working relationship with him,” Chun said. “We did a lot of traveling with the students and shared great adventures that I wouldn’t trade for anything in the world.”

Rebecca (Carson) Wischmann graduated from Buena in 1985. She sang in the school’s show band, performed in the annual musicals and was part of the On Stage show all four years of high school.

“Mr. Klein and those experiences reinforced my love of music and performing,” she said. “Though he didn’t know it, a positive comment I overheard Coach make about my abilities as a vocalist and performer inspired me to do more.”

Wischmann decided to abandon a career in education and joined the Air Force as a vocalist. She now lives in Belgium.

“Mr. Klein and the love of music he fostered in me were an underlying factor in that decision,” she said. “He was more than just a music educator. He was an example of how to live your passion. He loved and took care of each and every one of his students, no matter how busy he was ... he truly was ‘Mr. Holland’ for all of us.”

Fred Martin started playing trumpet under Klein in 1971 while he was a fifth-grader at Carmichael Elementary School.

“From fifth grade on, he was my band teacher all through school,” Martin said. “I had him for band in elementary school, junior high and when I was at Buena High School. He was an incredible mentor to so many of us, and an all around fantastic person.”

The Klein familyThe last year of Rick’s life was spent at home with his family and the pets he enjoyed.

“Rick loved his family and grandchildren, his dogs, cats and horses,” Margaret said while relaxing in the courtyard of the family’s Hereford home she and Rick built in 1975.

The Kleins’ two daughters, Carrie Duerk and Meghan Thomas, joined their mother for the interview, as did Meghan’s two daughters, Madison and Natalie.

An adopted son, Ruben Klein, lives in New York with his three children. Through the years, the Kleins took in numerous foster children who came from troubled backgrounds.

“We miss Rick every minute, but we’re remembering him by celebrating his life,” Margaret said. “Rick would have wanted that.”

Duerk smiled as she spoke of how her father was always joking around, always laughing.

“He was so proud of his students’ accomplishments,” she said. “He was a teaching artist, and was truly talented at making music. The high school kids he taught were ‘his’ kids and he always treated them like professionals.”

Throughout her father’s time at Buena, Duerk recalls how passionate he was about the music and theater programs there.

“He truly loved Buena, the students and work there,” she said. “We traveled a lot with the band, and we shared a lot of laughter.”

Rick and Margaret met while in college at Eastern Kentucky University where Rick was involved in the ROTC program. They were married in 1968 and came to Fort Huachuca from Fort Dix when Rick was a member of the 36th Army Band. They lived in Huachuca City.

“Rick got orders for Vietnam and traveled all over the country with the 36th Army Headquarters Band, playing his trumpet wherever needed,” she said.

“We had a good life, a good family and wonderful friends,” Thomas said of her family. “Because of our parents’ passion for music, our lives were always filled with music and that has carried through to our children.”

The Klein family’s wish for all who knew and were inspired by “Coach” is to continue to create art, sing, dance, make music and perform.

Klein’s legacy may have been best summed up by Chun.

“Coach was a good man, a phenomenal musician and composer, respected educator, mentor and friend. He will be missed by all of us who had the privilege of knowing him.”