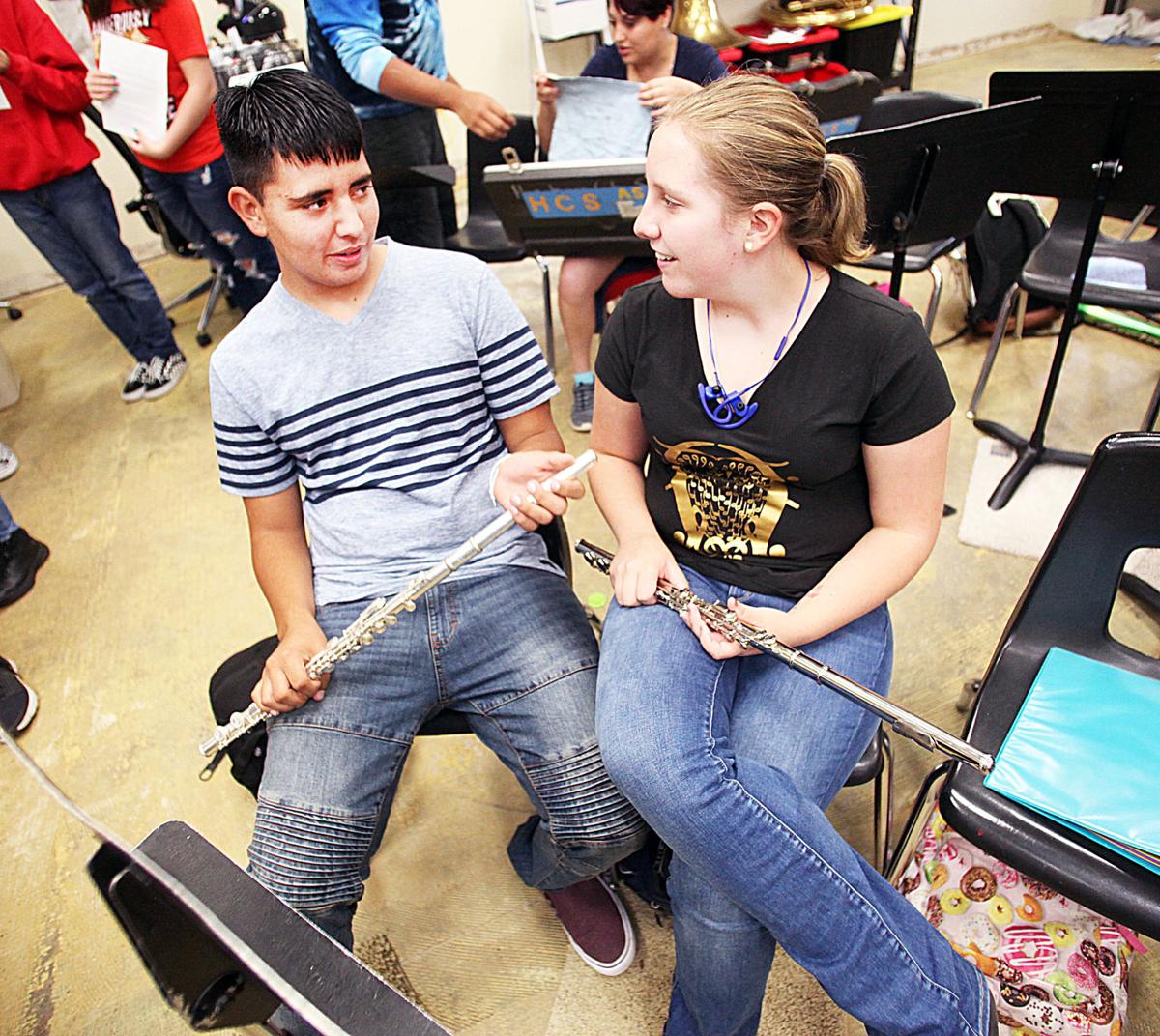 Tombstone High School band students Erick Alvarez and Hannah Hughes, both freshmen, familiarize themselves with the flutes they were given in the band room. 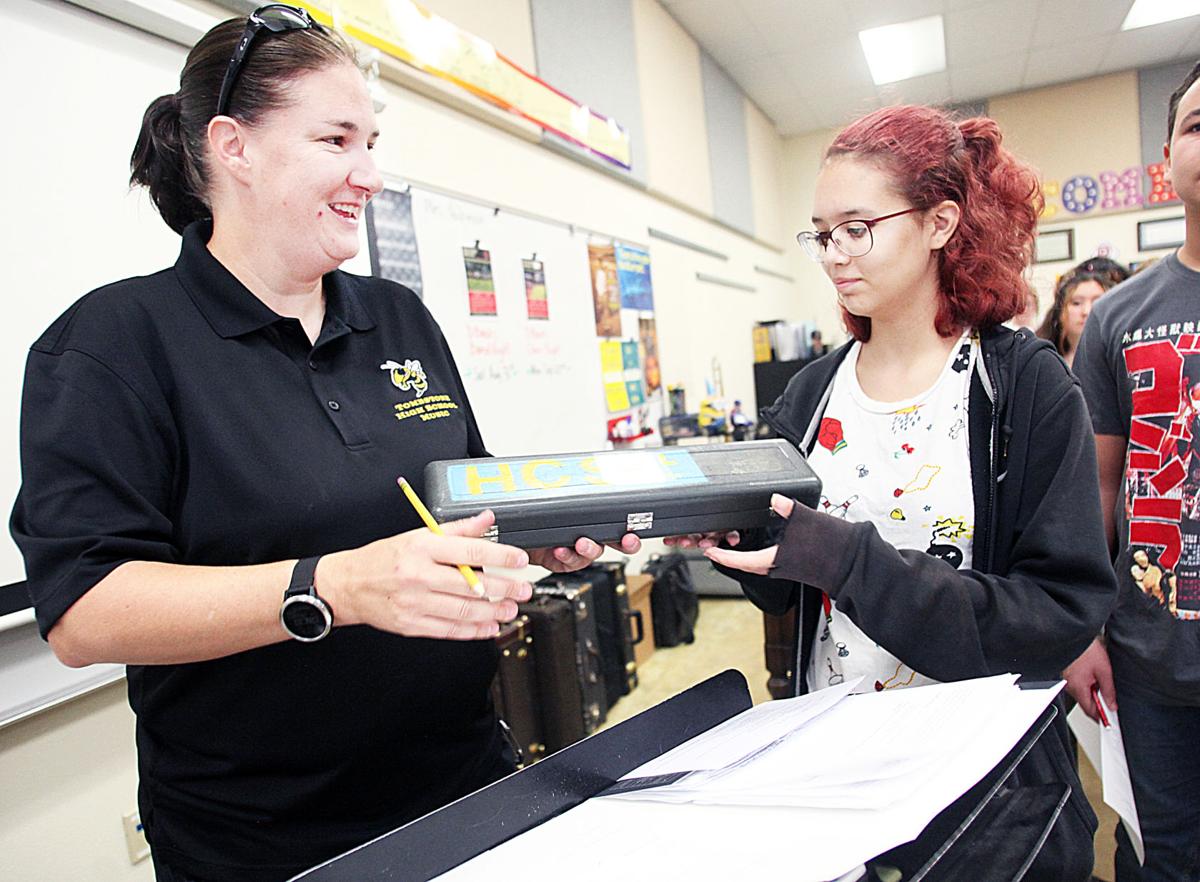 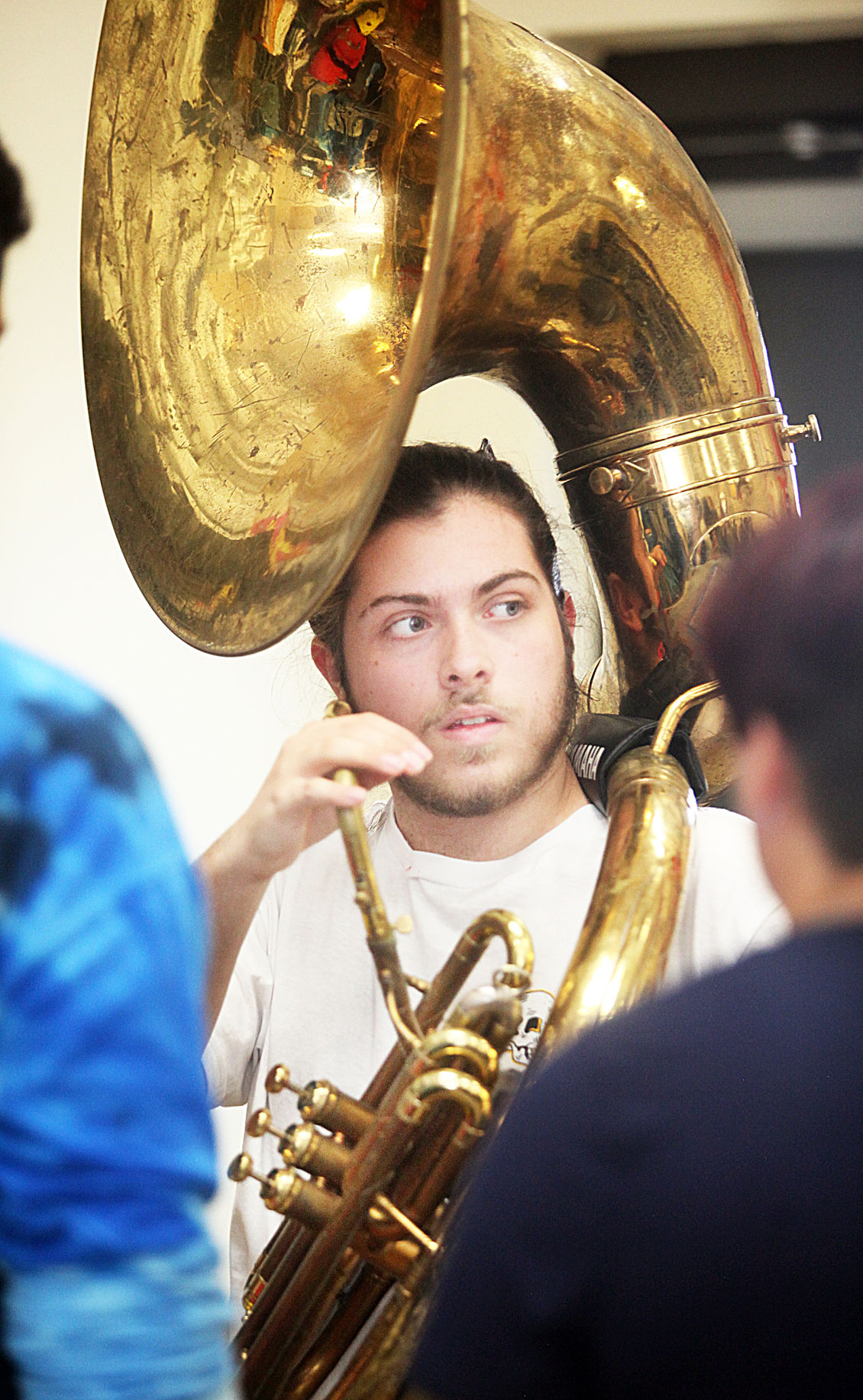 ABOVE: Senior tuba player Eric Corrick tries on his instrument for size this week in Tombstone. 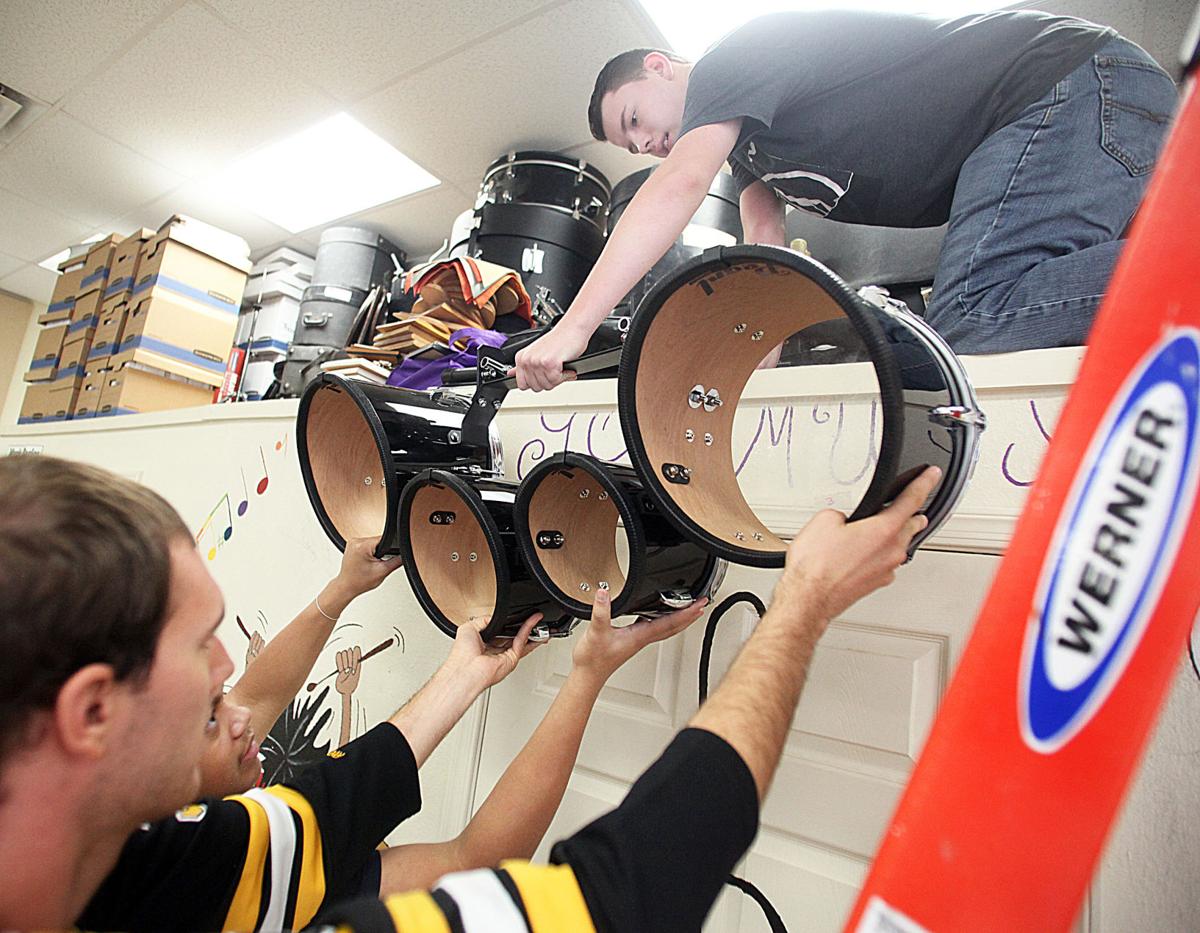 Tombstone High School band students Erick Alvarez and Hannah Hughes, both freshmen, familiarize themselves with the flutes they were given in the band room.

ABOVE: Senior tuba player Eric Corrick tries on his instrument for size this week in Tombstone.

When she started her new position as Tombstone High School band director last year, Rebecca Robinson had 15 people enrolled in her band program.

Most had never played an instrument before stepping into the band room, or even knew how to read music.

Undaunted, Robinson rolled up her sleeves and hit the ground running.

After the fourth day of school, the students were reading music and, under Robinson’s direction, traveled to Phoenix in late August to perform the National Anthem at an Arizona Diamondbacks baseball game with other high school bands from around the state. Wearing old Tombstone Yellow Jacket jerseys, as there was no money for band uniforms, they performed at all of the THS home football games.

Though still in its infancy, Robinson’s band swelled from 15 members to 36 this year. Students of all experience levels pack the music room, with more experienced members helping the newcomers.

“I’m so thrilled with the number of students we’ve received this year,” said Robinson, who also talked about how some sections of instruments have grown, particularly flutes, clarinets and trumpets.

“Last year, I had a total of six students playing those instruments. We had three trumpets, one clarinet and two flutes. This year I have eight trumpets, six clarinets and five flutes.”

While several freshmen signed up for band this year — unlike last year — many came into the program with a background in music.

“It was great today (Wednesday) to see my experienced players helping the rookies get their new instruments, show them how to set them up, hold them, and get their first sounds,” she said. “I have many students who have returned from last year and some are now taking band with me for the third semester in a row.”

THS senior Shelby Spooner, a bass drummer, is one of the third-semester members.

“I really love this program,” he said. “I started band in middle school in another school district and have always enjoyed it. It’s great to see all these people here today because it shows how much our band is growing.”

“I’ve been in bands for seven years and have been playing tuba four of those years,” he said. “This program has come a long way since last year. It’s good to see this kind of interest.”

This marks Robinson’s 14th year teaching music and second year at THS. After earning her principal’s certificate in 2017, she is the high school’s Career and Technical Education (CTE) administrator, in addition to her roles as band and choir teacher.

Robinson started playing French horn in elementary school and attended Wright State University in Dayton, Ohio, where she studied music education before transferring to the University of Arizona, earning her bachelors of education in music in 2001.

Prior to her arrival in Tombstone, she taught band and choir for Benson Unified School District for six years. Her music resume includes playing third horn with the Sierra Vista Symphony and performing with the 36th Army Band when it was at Fort Huachuca.

With Robinson as conductor, the Tombstone High School band will return to Chase Field on Aug. 31 to again perform the National Anthem at a Diamondbacks game with other high school bands.

“I’m pretty excited about the different things we’re involved with through band,” said Aliyah Steward, a sophomore who played bass drum and flute last year when there were so few band members. “We have a lot more members this year.”

District Superintendent Robert Devere applauded the success of such high school programs as band, JROTC and FFA, pointing to the importance of getting the right people to lead and mentor students.

“The biggest factor in the success of any program is getting the right person to run it. You can’t make up for that. You can’t buy that with technology, curriculum, supplies or facilities,” Devere said. “Rebecca (Robinson) brings her passion and love of both music and students with her every day, and it shows in how successful her program is and in how the students respond to her.”