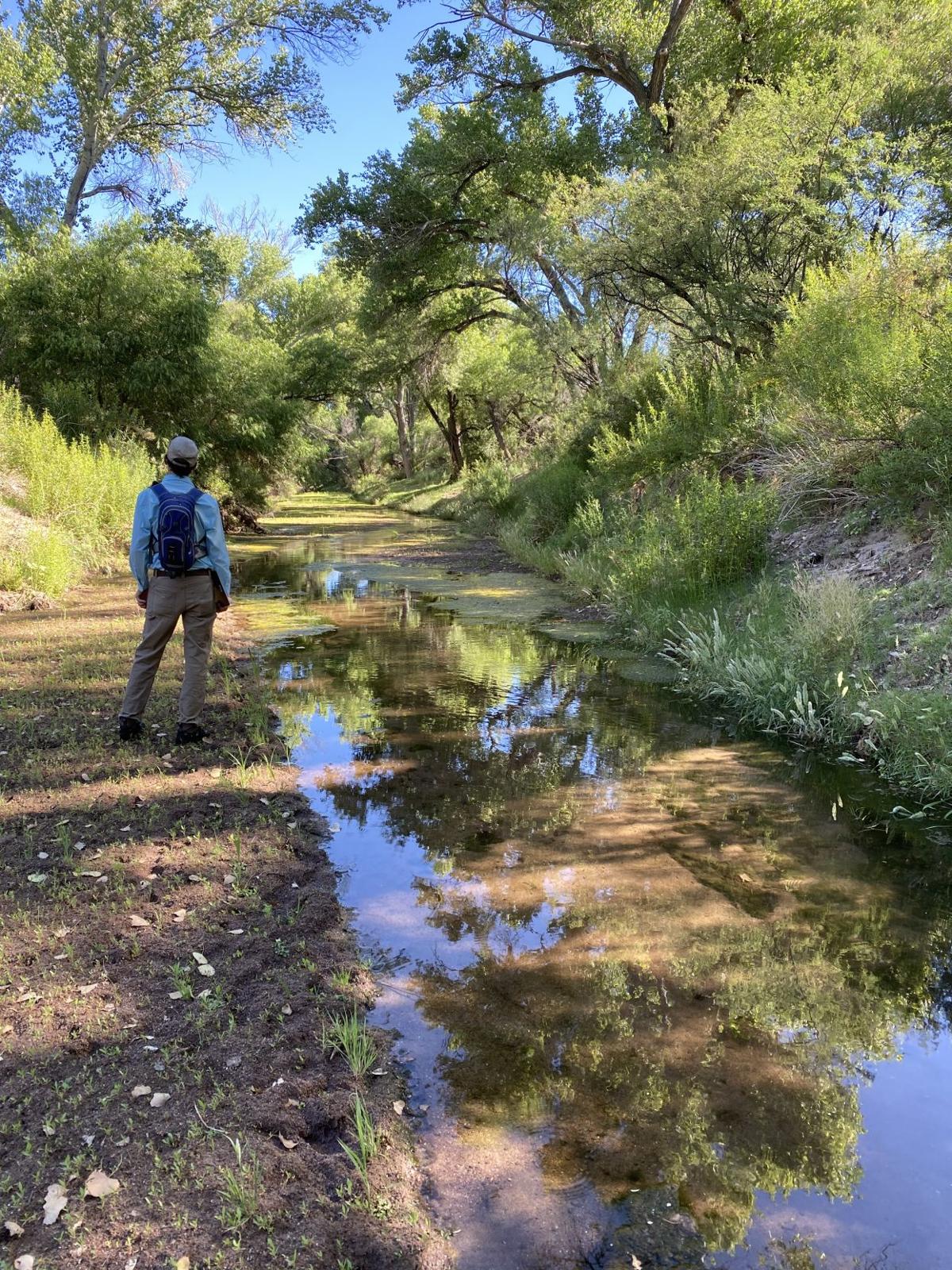 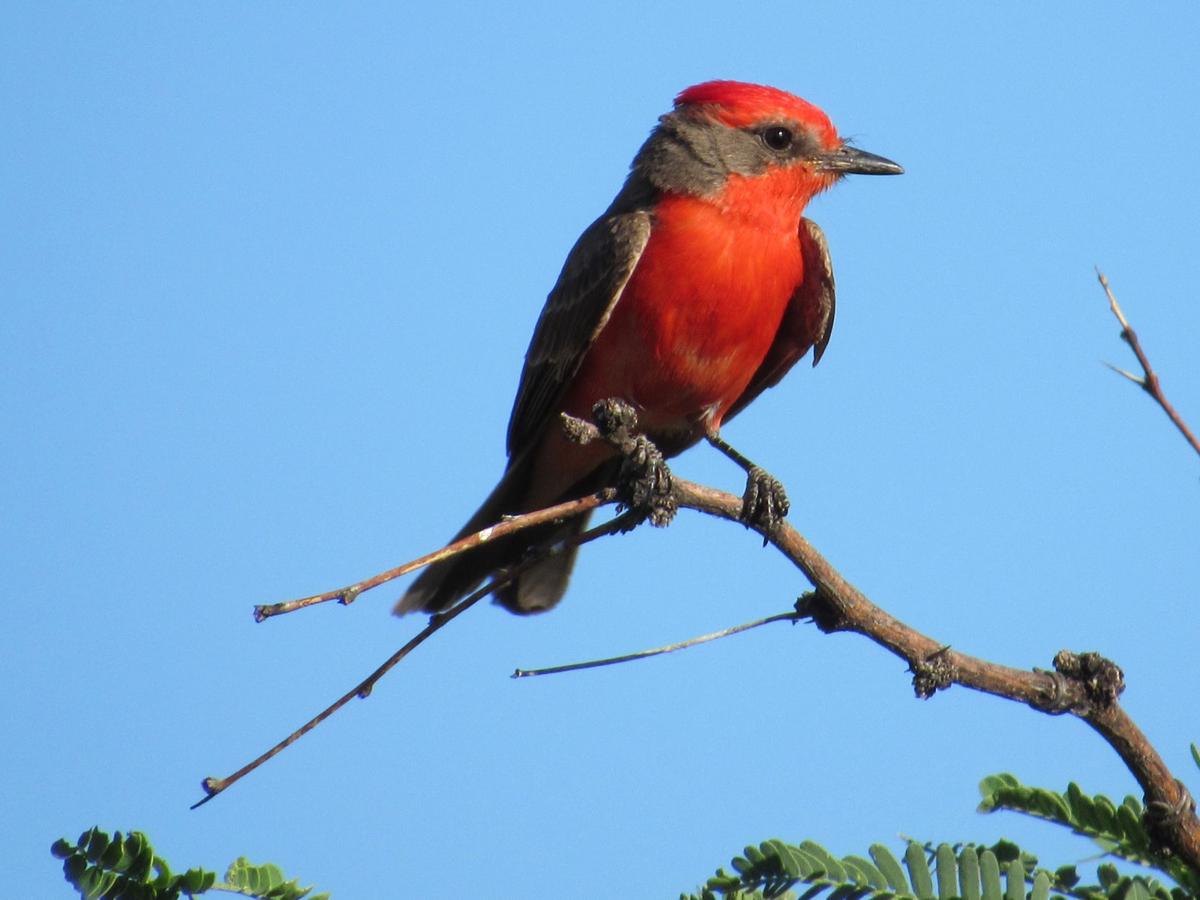 The vermillion flycatcher is just one of several hundred species of birds who make the San Pedro River in the National Conservation Area home. 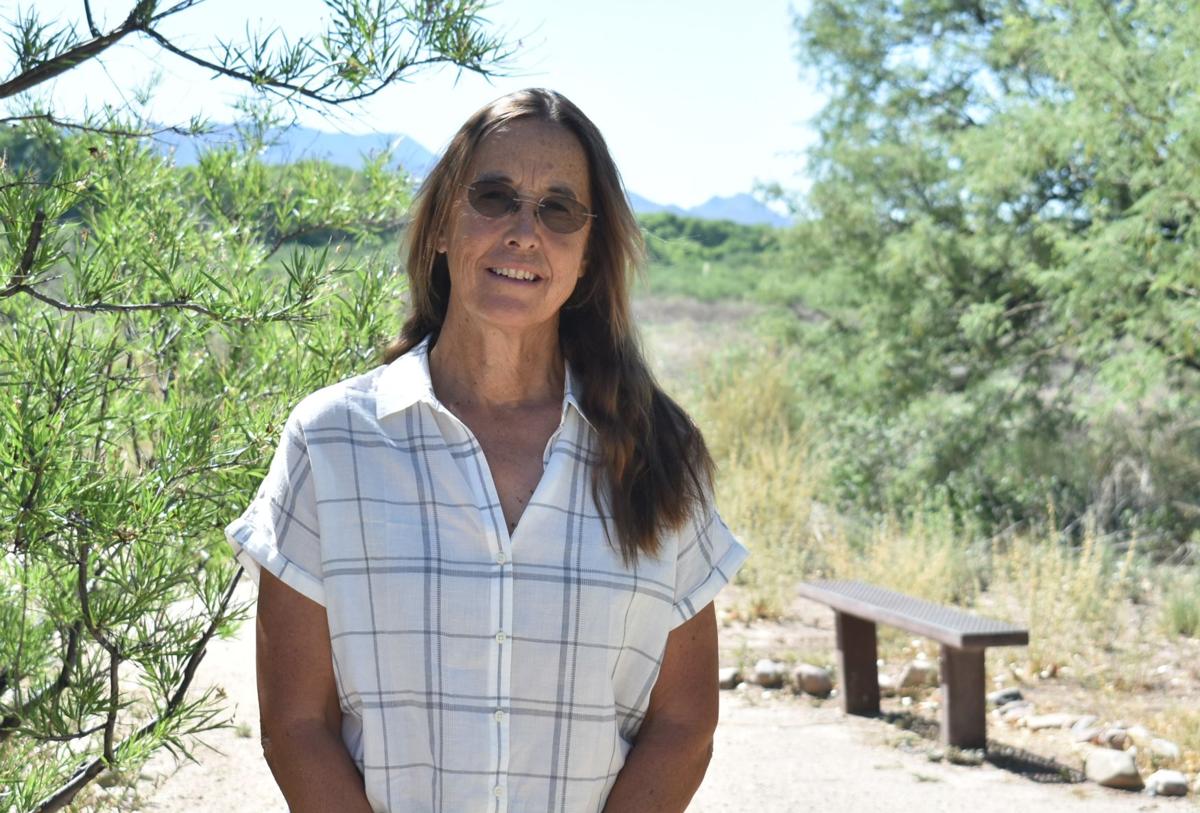 The vermillion flycatcher is just one of several hundred species of birds who make the San Pedro River in the National Conservation Area home.

SAN PEDRO RIVER — The morning coolness lingered on the gentle breeze Thursday morning at the San Pedro House where the chattering of people combined with the calls of the Gila woodpecker and the songs of myriad other birds that call the area home.

It was just the kind of morning the volunteers for this year’s Wet/Dry Mapping of the San Pedro River welcomed as they ventured out to measure the amount of streamflow in the river’s many different reaches.

The Nature Conservancy (TNC), which organizes the effort, and the 50–some community volunteers who help with the efforts did things a bit differently for this the 22nd year of the mapping, said Holly Richter, TNC hydrologist. Due to the COVID–19 virus, they staggered the field trips over the past week to limit the number of teams to ensure people stayed safe and healthy.

“We had to use smaller teams going out on different days,” she continued. “It made it harder to shuttle people around to drop off and pick up points. The logistics got tough this year.”

Virus or no virus, TNC was determined not to have a gap in the vital data. They managed the mapping during the Monument Fire in 2011 and even during a serious flood in another year. The volunteer teams started from the border with Mexico and headed north to incorporate all of the SPRNCA to Benson and beyond. Included in the mapping were the Babocomari River and various washes feeding into the river, explained Richter.

South of the border, the Mexican environmental counterparts Naturalia and CONANP volunteers handled the mapping. Richter said they were not sure the Mexican portion of the San Pedro would be mapped due to the government shutdown from the virus, but their teams were able to complete the task.

The data has not been shared yet, but she looks forward to the results. As it happens, on the south side of the Huachuca Mountains, tributaries carry water south into Mexico, but then it ends up coming back north into the U.S. via the river.

“This year’s mapping highlighted the dedication of the volunteers in doing this,” said Richter. “This event lets people see a day in the life of the river. They show the prioritization of what’s important in people’s lives. They get to connect with it through this project. It reinforces the commitment of the volunteers to the river. It’s an extraordinary experience.”

Richter and Cochise Conservation and Recharge Network (CCRN) environmental projects coordinator Mark Apel walked the five mile reach from Highway 92 to the Hereford Bridge and were pleased with what they found.

“I walked this stretch for the first time 20 years ago,” Apel said. “Now, to come back after all these years and see how much it has changed. It was so beautiful. So much vegetation and wildlife. And it was encouraging to see such a long stretch of stream with no breaks.”

Mapping during the driest time of the year provides TNC and all the organizations and agencies associated with the river and the San Pedro Riparian National Conservation Area (SPRNCA) a snapshot of the bleakest condition of surface flow. More often than not, the river’s many reaches have little flow and just some isolated pools of water.

Richter said in general, the teams found more water in the river this year, which she attributed to the “unusual” winter rains which tend to be far gentler than the summer monsoon soakers. Even the fall hurricanes which make their way to the area can impact the river into the dry months.

“So, we get to see what effect those rains have on the river,” she said. “It gives us a different perspective on how water flows.”

“It was encouraging to see such a long stretch of stream,” added Apel. “We walked for about three hours and saw no breaks in the flow.”

Volunteers saw gray hawks, a sight some birders hope for when they visit the SPRNCA, and heard zone tailed hawks and yellow billed cuckoos, a threatened species.

Richter said, “It speaks to the unique aspects of the river. People come from all over the world to see the birds along the San Pedro.”

They also saw a great blue heron and a flock of Mexican mallard ducks and had to walk an obstacle course through a horde of tiny, red spotted toads.

“The ground was just moving with them,” she laughed.

Others reported seeing bear tracks and one team in the Huachucas was chased by a turkey protecting her chicks, she remarked. She and Apel saw some beaver activity as well. The beaver population plummeted just a few years ago, but now more evidence of beaver returning to the river was recorded.

Other teams reported normal or below normal conditions for other reaches of the river, Richter said. Palominas had a more rain than other parts along the river.

“A lot of people stay interested with the same stretch of river,” she noted. “It’s like visiting an old friend.”

It will take three to four months to compile all the data and create the map for this year, she said.

For Apel, the mapping represented a chance to see how important the CCRN’s completed Palominas recharge and Horseshoe Draw sedimentation prevention projects are, and what more may be accomplished to the river’s and the aquifer’s futures for projects waiting in the wings.

CCRN is a consortium of county, Sierra Vista and Bisbee governments, along with the TNC, Fort Huachuca and the Hereford Natural Resources Conservation District (HNRCD). Its mission is to implement a regional network of land and water management projects that result in conservation of water resources, a healthy watershed, a flowing San Pedro River and “a vibrant local economy,” Apel said.

There are three projects in the works: Coyote Wash, within the Bella Vista property, Riverstone, east of Moson Road, and a plan to pipe Bisbee effluent to a crucial point in the river near the border, he explained.

The overarching goal of conservation is to protect the groundwater supply by placing land which could be developed or returned to agricultural uses in conservation easements which restricts land uses.

“We want the best bang for the buck, so we want to place them where they’ll have the biggest impact on the watershed,” he emphasized.

At Riverstone, CCRN and Sierra Vista are monitoring the area for flows and what the capacity is there for recharge.

The Bisbee Effluent Project is a plan to pipe treated effluent from Bisbee for 12 miles as close to the San Pedro River as possible near the border. Generally, there is little to no water coming across from Mexico and the reach is considered at risk as the vegetation is suffering from the lack of water.

“There are private property and right-of-way challenges on that,” he said. “But, we have a five-year option with Bisbee and we hope to work through all the issues within that time.”

According to Apel, all three projects combined are estimated to cost around $22 million.

Another goal of CCRN is to open the recharge projects to the community so “folks can get out and recreate on the land and see what we’ve done,” said Apel. A pathway around the Palominas Recharge Project allows walkers to enjoy the fresh air, the quiet and observe the unique system of weirs which slow down the stormwater to allow percolation into the groundwater supply and, through a channel, make its way to the river with less sediment.

Another multi–purpose path is planned for the 285-acre parcel on the west side of Palominas Road. which will permit non-motorized recreation. Hiking, biking and horseback riding paths will wind around the rolling grasslands, Apel added. CCRN is working with the Palominas Unified School District to create an access point off of Highway. 92 and a parking area. The district sees it as a plus for cross country teams and will help with the maintenance of the walkway.

“It’s kind of like a savannah,” noted Apel. “It will be a beautiful, scenic path. In Cochise County, we are combining flood control for the benefit of the residents, putting water back in the aquifer and providing people with recreation and education.”

Visit the TNC wet/dry mapping of the San Pedro River from 2007–2019 on the site at: http://azconservation.org/downloads/san_pedro_wet_dry_mapping.