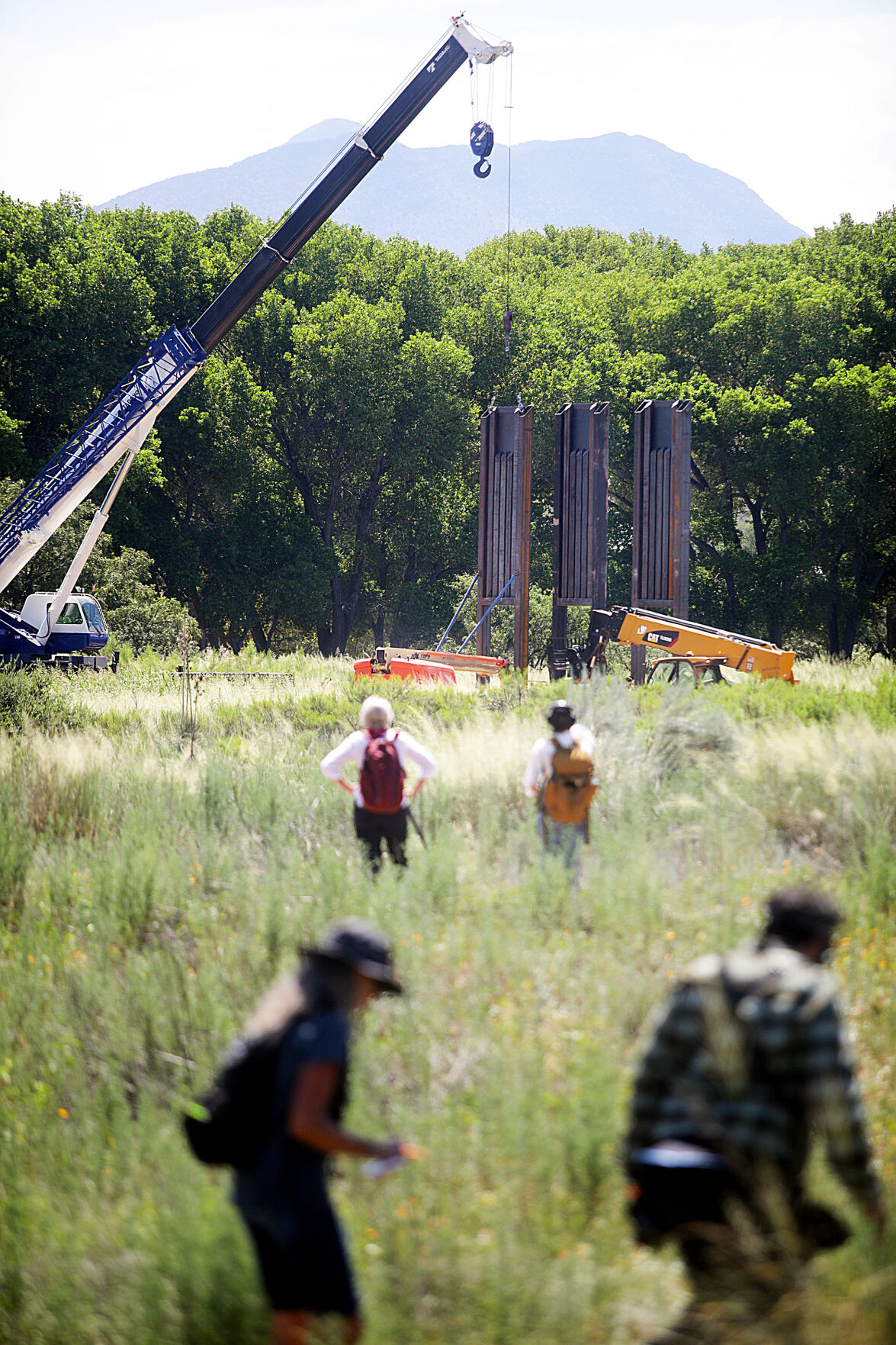 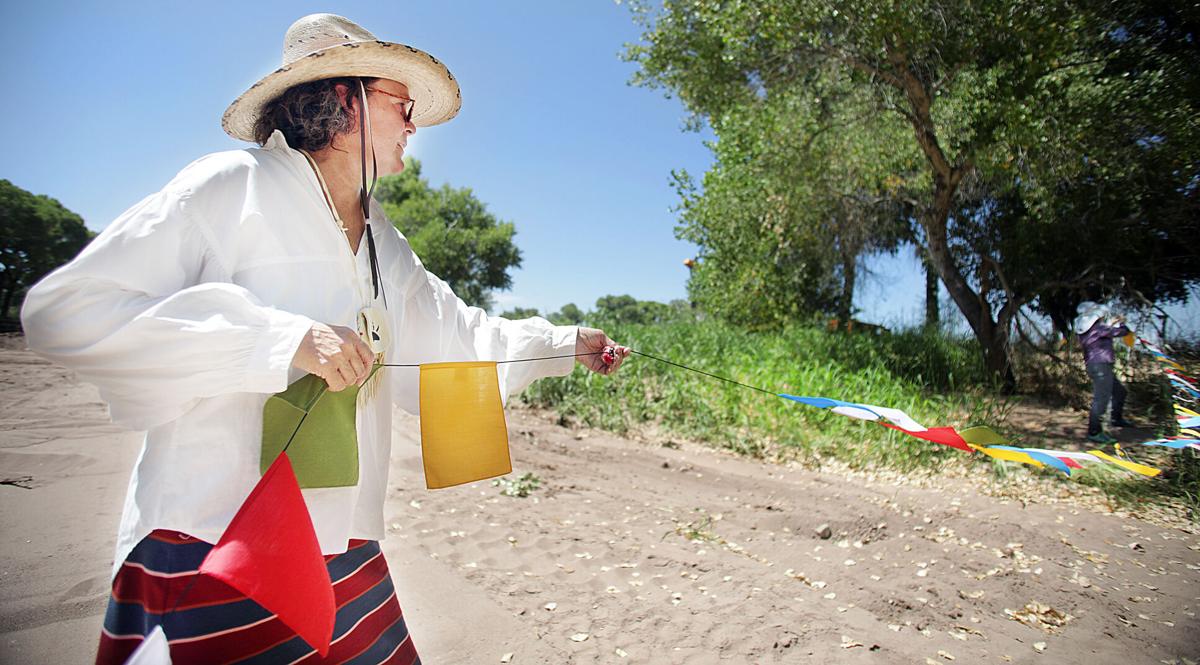 Kate Scott, organizer of Friday’s We the People Protest the Destruction of our Sacred San Pedro River, stretches prayer flags along the dry river bed during the protest. 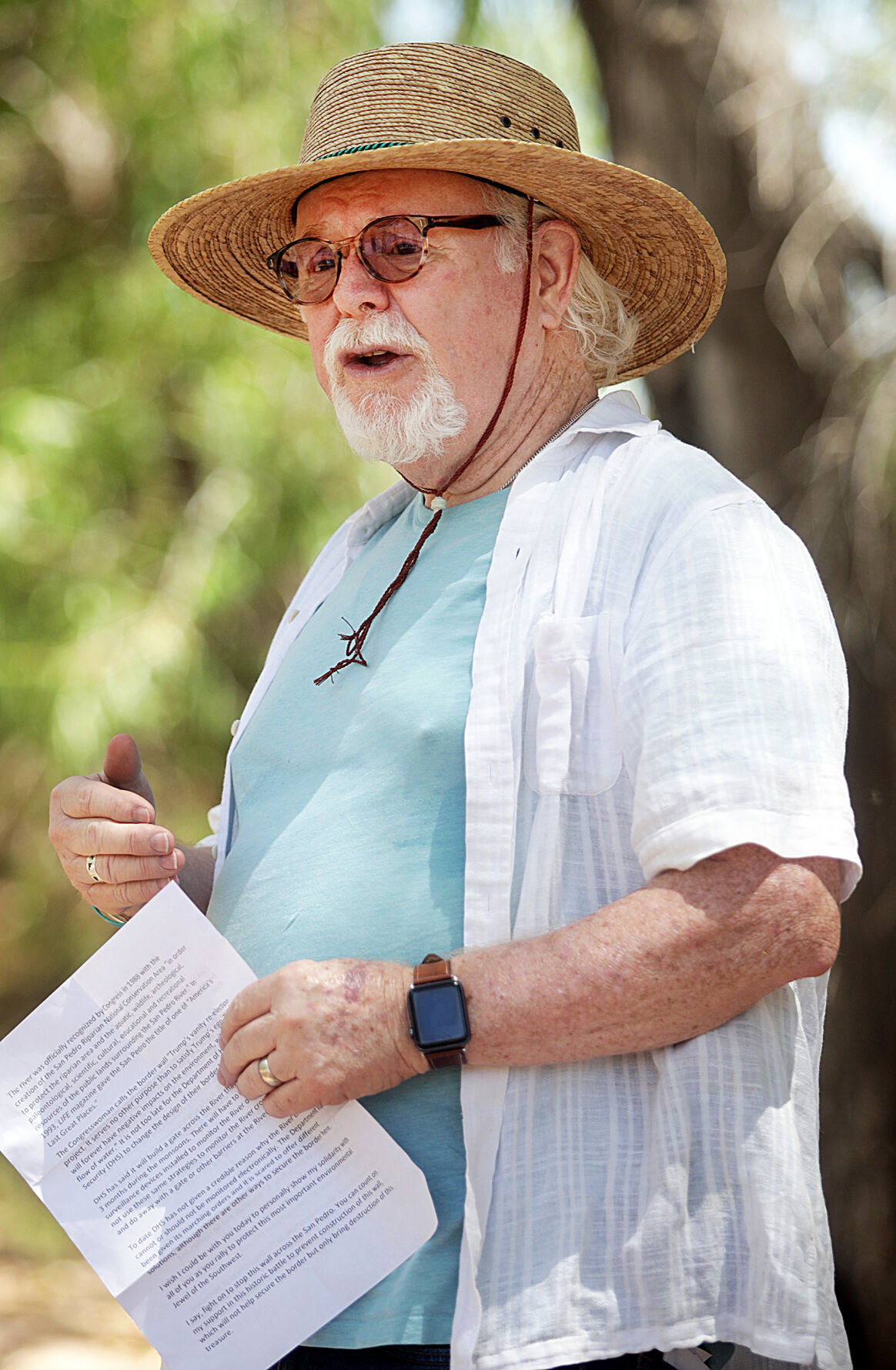 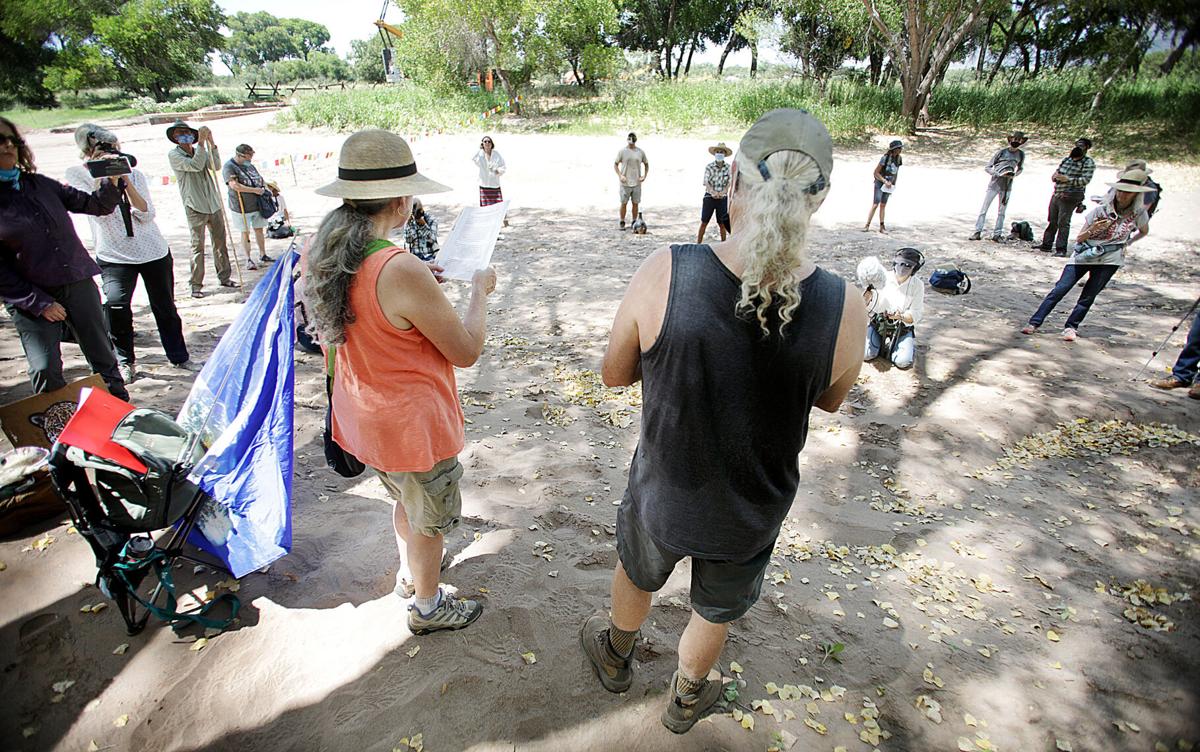 Protesters gather around speakers on the San Pedro River bed Friday while construction continues in the background. 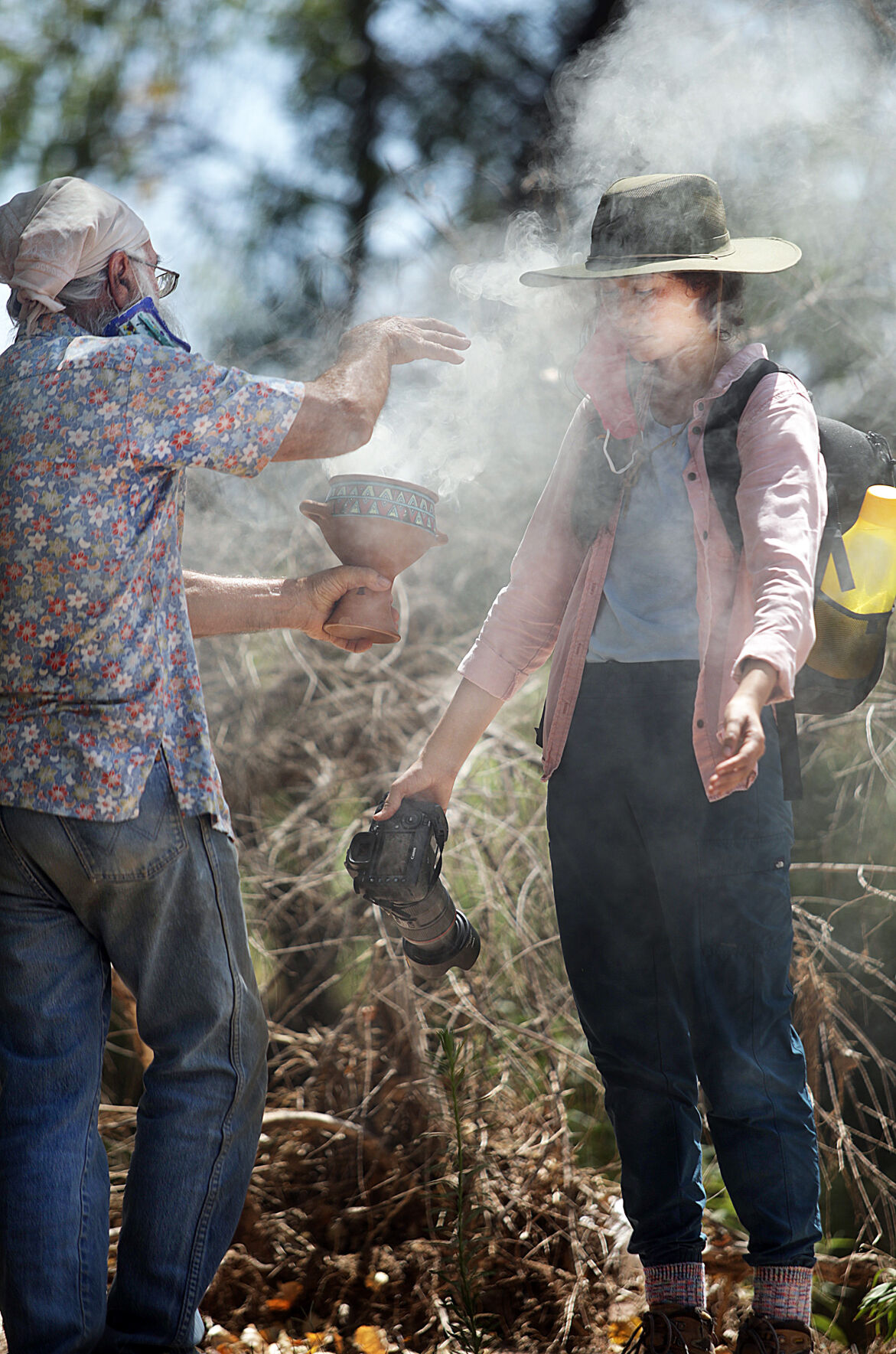 A protester is engulfed while being sage smudged prior to the protest. 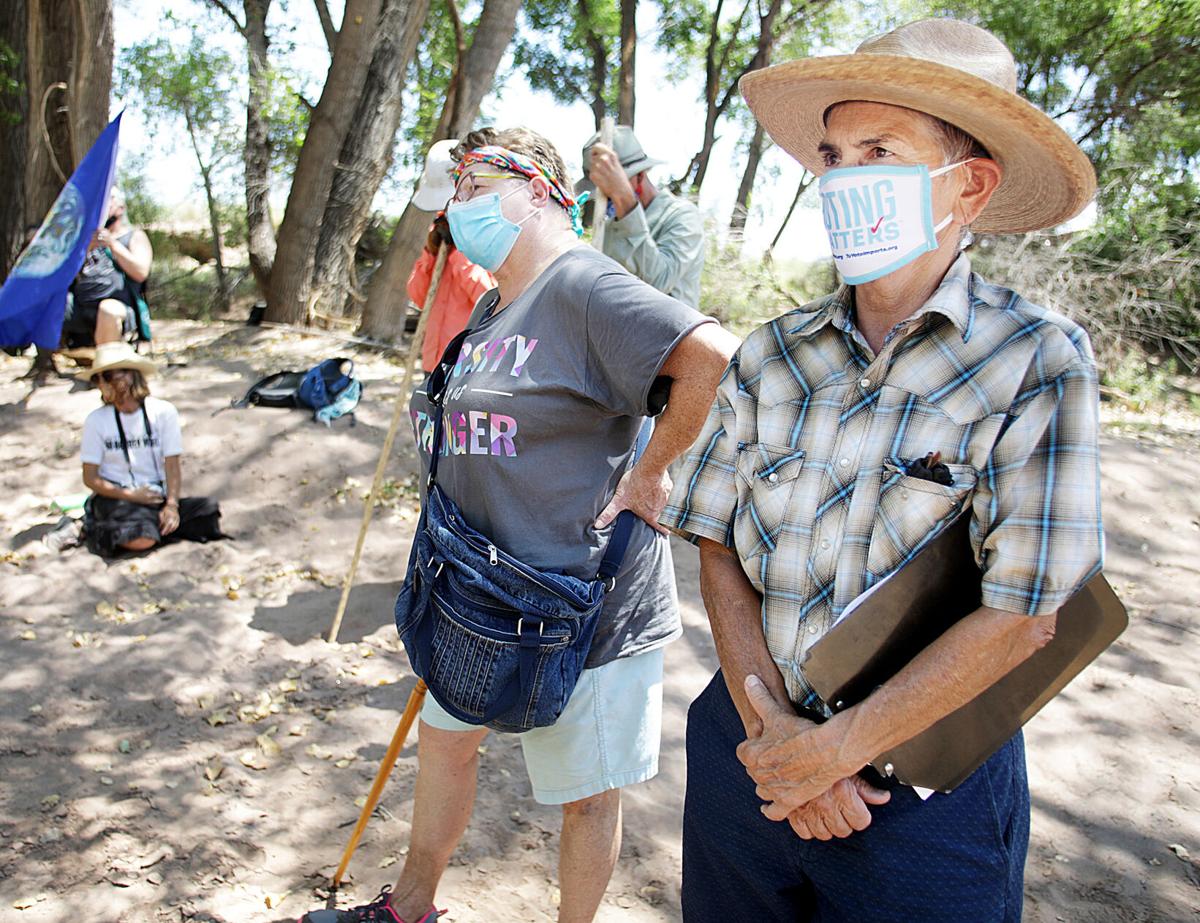 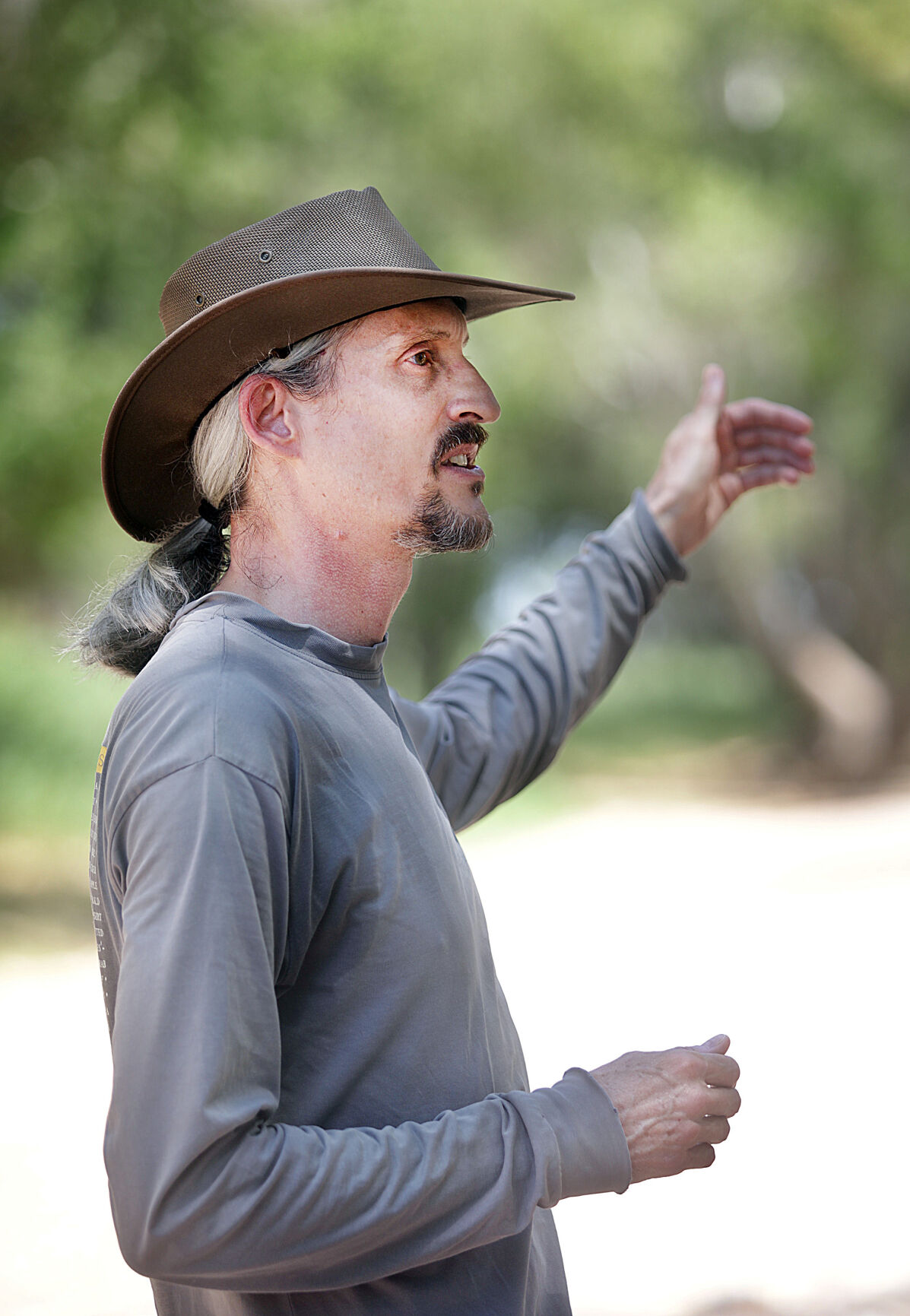 Kate Scott, organizer of Friday’s We the People Protest the Destruction of our Sacred San Pedro River, stretches prayer flags along the dry river bed during the protest.

Protesters gather around speakers on the San Pedro River bed Friday while construction continues in the background.

A protester is engulfed while being sage smudged prior to the protest.

SAN PEDRO RIVER — Gathered under the shadows cast by swaying cottonwoods on a dry riverbed of chocolate-colored sand, activists decried the construction of a 30-foot tall border wall being erected just a few feet away.

“Monstrosity” was the word bandied about the most on Friday to describe the steel structure at the protest organized by Kate Scott of the Madrean Archipelago Wildlife Center.

Standing in a circle with the Mexican border just to the south and in clear view on the Hereford side of the San Pedro River, the 36 attendees listened to each other’s words of encouragement, anger and sadness, about the beginnings of a wall looming in their midst.

Colored flags were strung up across the riverbed with slogans that stated: “She is Wild. She is free. Let Our Sacred River Be.”

All along the southwest border of the United States, there have been countless protests such as these with activists bemoaning the construction of the border wall promised by the Trump administration.

According to an article in the Washington Post on Friday, “Trump’s $15 billion border wall project includes about 275 miles of newly completed barriers thus far, and Department of Homeland Security officials say they are on track to finish another 175 miles by the end of the year.”

The article also mentions that the president “wants to install floating border barriers that could be used to wall off river crossings and reservoirs along the international boundary with Mexico or extend U.S. fencing deeper into the sea, according to a new market solicitation posted by the U.S. Army Corps of Engineers.”

Jeff Sturges and Liz Lopez, the organizers of the Hands Across the River protest this past January on the Hereford Bridge — the event attracted about 1,000 people — were the first speakers at Friday’s event.

Sturges and Lopez both read from a prepared statement titled, “What About Our River?” which in essence urges elected officials and candidates in Cochise County and the state to speak out against construction of the wall. The couple called on alternative methods, such as drones and cameras, to be employed to detect illegal entry into the U.S., rather than the huge structure.

“Proven technology, which is less expensive, more effective and more environmentally friendly, is readily available,” Sturges and Lopez said. “Money could be spent in Cochise County and Arizona on technology and manpower that would alleviate the many risks inherent in this project and provide better, more environmentally friendly border security.”

“It is hard to see the current situation as anything other than the federal government running roughshod over our country and state, as well as many environmental regulations...,” they added.

The sounds of trucks and a towering yellow crane working on the wall could be heard as they spoke.

Sturges and Lopez were followed by Randy Serraglio, a Southwest Conservation Advocate with the Center for Biological Diversity. Serraglio stirred the crowd when he became emotional and yelled out, “No matter what happens, no matter what is built, we’re going to tear this wall down.”

Others echoed what Serraglio said, calling the construction behind them “a monstrosity, a travesty and a raping of the environment.”

While several elected officials, both Democrat and Republican, were invited to speak at the event, as well as candidates running for state and local office in November, only three attended and spoke. They included Ron Barber with the office of U.S. Rep. Ann Kirkpatrick, (D) Arizona, Ronnie Maestas-Condos and Kim Moschetti, both running for the Arizona House of Representatives as Democrats representing Legislative District 14.

Bob Karp, a Democrat running for the LD 14 Senate seat, sent a written statement to the event.

At one point attendees began imitating the calls of coyotes, different birds and even howling wolves. They were encouraged to do so by Kevin Dahl, senior program manager of the Arizona Field Office, Southwest Region of the National Parks Conservation Association.

Maestas-Condos said she attended the protest Friday because she lives in Hereford and walks along the San Pedro regularly.

“I saw that crane, I saw that wall going up and it’s hatred, it’s fear that’s building this thing,” she said.