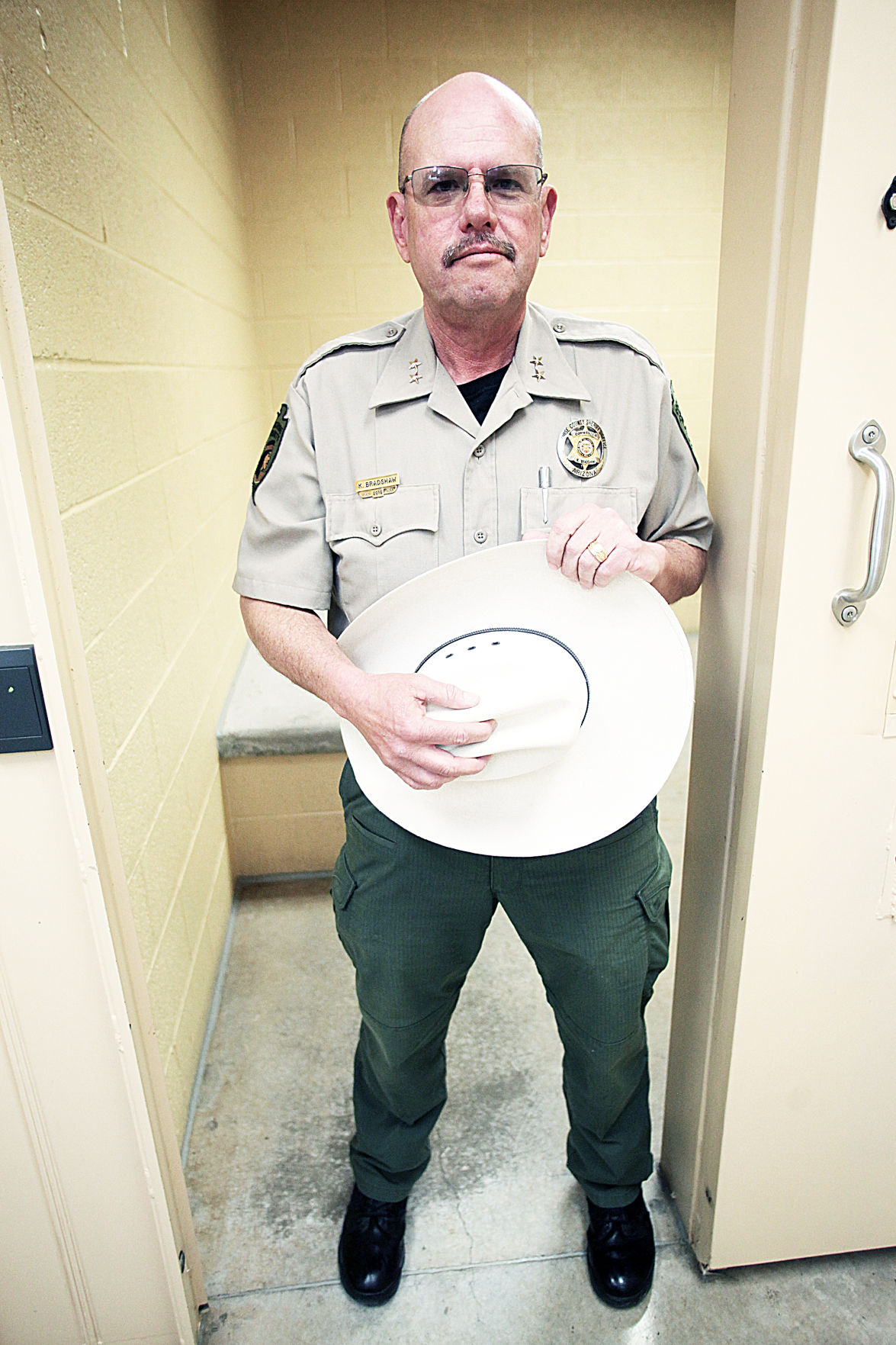 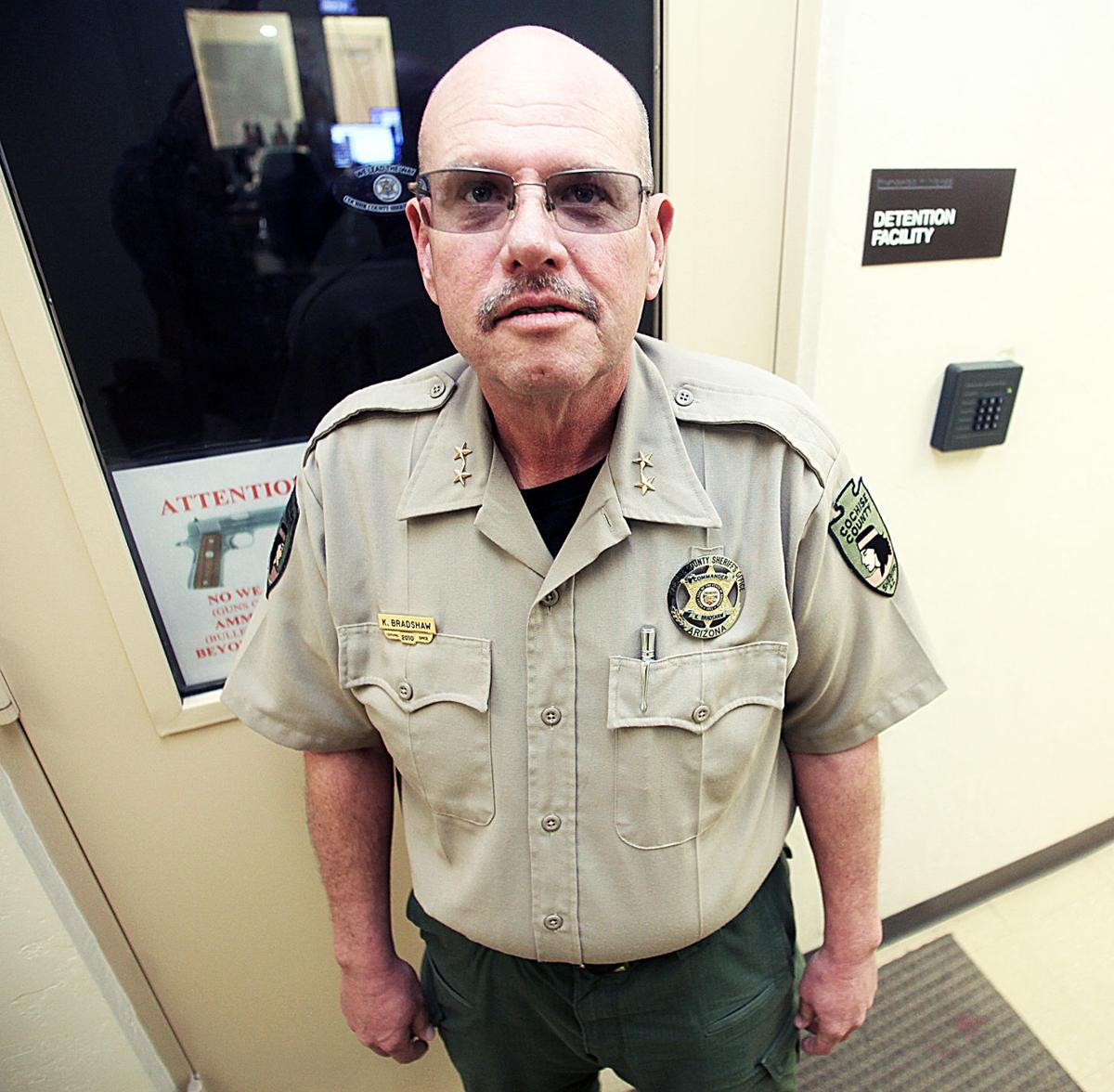 Cochise County Sheriff’s Office Jail Commander Kenny Bradshaw has been the commander for about 10 years.

Cochise County Sheriff’s Office Jail Commander Kenny Bradshaw has been the commander for about 10 years.

SIERRA VISTA — Cochise County Jail Commander Kenny Bradshaw has been in charge of the county jail facilities for nearly 10 years.

Bradshaw took some time earlier this week to answer some emailed questions from the Herald/Review.

Herald/Review: What made you want to become a correctional officer and work in jails?

Kenny Bradshaw: After briefly attending the University of Arizona I realized that the University was not for me, so I moved back home to Bisbee. I found out that the state was in the process of opening a State Prison in Douglas and was hiring Corrections Officers. I was hired in August of 1986 and quickly realized that this was such a fascinating job, different every day. Almost 34 years later I still find it fascinating and have never had two days that were the same.

H/R: What are your duties at the Cochise County jail?

KB: Ensure the professional performance and administration of the County Jail. Responsible for planning, organizing and directing the activities of the 3 Jails in Cochise County. Preparing, managing, and implementing the detention division budget, including forecasting additional funds for staffing, food for inmates, repairs and improvements.

H/R: What made you decide to come out of retirement to take current position?

KB: I retired as a Captain and stayed with the Department of Corrections as a dispatcher and an administrative assistant, in the warden’s office, in charge of policy. After a year of retirement, the Correctional Officer Retirement (CORP) plan allows you to return to a CORP position under the Arizona State Retirement System (ASRS). So after that year I was offered a Deputy Warden position in Tucson. While in Tucson I heard that Cochise County was looking for a jail Commander so I applied hoping that for the first time in my adult life I would have less than a 30-minute commute and get to live and work in my hometown. I was hired and have been the Jail Commander almost 10 years.

H/R: You were a deputy warden in a prison and now commander of a jail. What are some of the differences?

KB: The Sheriff’s Office is so much easier to navigate and accomplish things. The Arizona Department of Corrections is a huge state agency with many layers of administrators. In the Sheriff’s Office I am empowered by the sheriff and the chief deputy to be innovative and run my division. I can implement new policy and procedures without having to go through five layers of approval seeking authorization from a central office in Phoenix.

As far as inmates are concerned, in prison you normally know who is coming in and some history on them as far as behavior and appropriate classification. At the jails people are fresh off the streets and we often know nothing about their history, drug use, or behavior.

H/R: What are some of the challenges of a jail commander the public may not think of?

KB: As the jail commander you have at least a basic knowledge of all facets of the jail. Just monitoring our food service contract, I spot check safe food service practices, proper serving temperatures, correct serving portions, caloric value, religious diet requirements and menu variety. We also house juveniles so we have to ensure sight and sound separation from adult inmates, adherence to education requirements and compliance with the school lunch programs as juveniles have different nutritional requirements than adult inmates.

The biggest challenge is dealing with the mental health crisis in Cochise County. There are very limited resources for the mentally ill in Cochise County, so sadly many of these people end up in our jails. Our staff and facilities are not properly equipped to deal with this population.

H/R: What is the craziest thing you’ve encountered in your line of work?

KB: I have seen many things throughout my career but one of the craziest things I saw was a major racial disturbance that started over the theft of a cookie. Many inmates were injured over something as simple as that.

H/R: There have been talks of establishing a tax district to improve the jail. What improvements and programs need to be implemented at the jail?