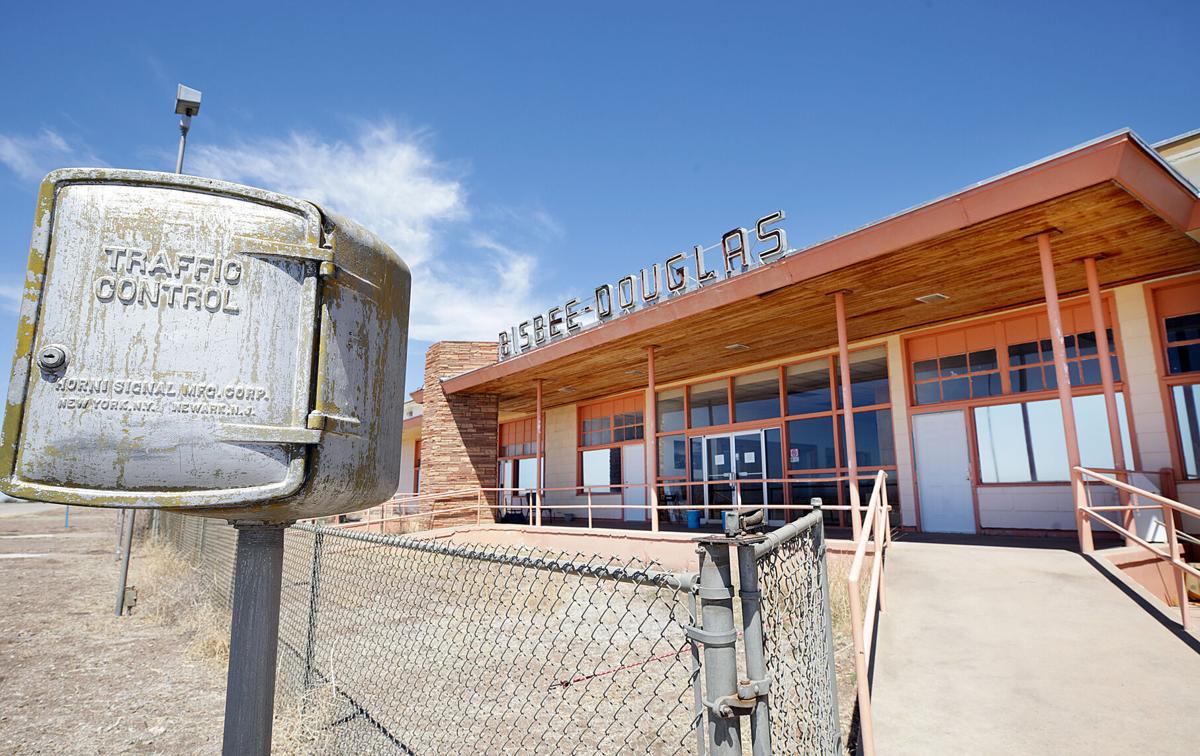 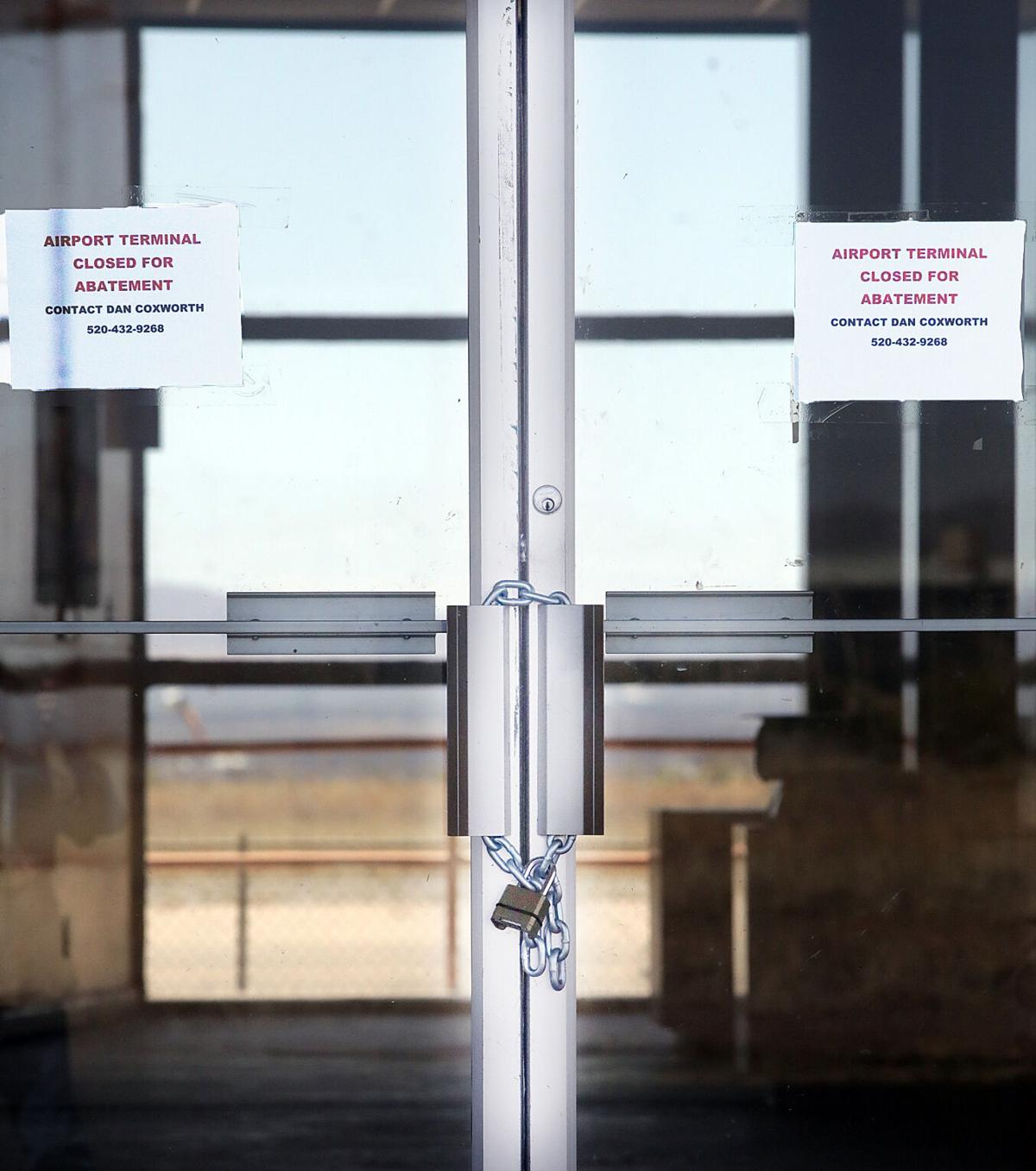 BISBEE — The Bisbee Douglas International Airport has been viewed for some time as a potential location for renewed economic development as a partner with the proposed commercial Port of Entry west of Douglas.

Located 10 miles north of Douglas, the 80-year-old airport’s runways and lighting have undergone a number of repairs and replacements, but the old terminal and several still-standing hangars and other buildings are in need of drastic renovations.

In a work session held March 30, Cochise County Board of Supervisors Ann English, Peggy Judd and Tom Crosby were given a brief overview of what could be done with their approval in the next fiscal year 2021–22 budget by Facilities Director Henry Meraz.

An abatement assessment was completed on the terminal due to the presence of asbestos, and the cost of removal is estimated at about $238,000, he said.

“There is a hangar which also has asbestos siding,” he added. “But, you don’t have people working out of it. The terminal could be leased, but right now it is too dangerous. The building is too old with too many cracks and crevices that on a windy day disturbs all the asbestos. It’s not a healthy environment.”

Along with the need to bring the terminal up to date, he also suggested a new well be considered at the airport to provide water for the airport and the Douglas prison complex. The county drilled a second well, but when tested by the Arizona Department of Environmental Quality it was found to be contaminated by petroleum–based volatile organic compounds and was shut down.

“ADEQ spent thousands of dollars taking water and soil samples,” Meraz said. “Their thinking was the airport in its time was like a miniature city and it’s possible airplane fuel and oil was used for dust control.”

With adequate testing, a new location for a well could be found in the “right spot at a cost of around $100,000,” he said. “The good news is we could use all the equipment, the entire well house to the new location. We could reuse nearly $1 million of stuff we have.”

When Crosby asked why the need for two wells, Meraz explained the county is a utility provider for 2,500 residents at the prison.

English added, “When the water goes off, we have to provide them with bottled water. It’s very costly. The law is very specific, if you provide water you can’t cut it off. For good management, you need to have two wells. If one needs repair, you use the second well.

“That’s why we drilled the second well to begin with. We got some bad advice and had bad luck. Even though the well hasn’t tested bad since, when ADEQ tells you to shut it down, you shut it down.”

The first well is now 800 feet deep and no issues have been reported, but county facility workers are out there often to beef up the existing well and get it as stable as possible, said Meraz.

English said it was good water and years ago the county was told it could be bottled and sold.

“Apparently, it has a good sand filtration system, not just clay that is found in many places” she said. “We’re lucky about the quality of water that’s there. But, we just don’t have enough capacity.

“Due to repairs and maintenance the pump has to be turned off. Then we have to hope the prison doesn’t use all the water in the tank before repairs are done. We need the prison. It provides employment. And the only way to keep it is to keep the water.”

Crosby said he spoke with County Administrator Richard Karwaczka about eventually turning the airport over to Douglas, but English said the city is having problems keeping up with its own Douglas Airport.

There have been ups and downs in Douglas interest in BDI. The city is not willing to use its resources to make the necessary upgrades, she said. English believes the county should make it functional to turn over to the city.

“We need BDI as one of the jewels we can put out there for more economic activity, the same as the new Port of Entry. We should put our best foot forward,” she said.

The airport has one tenant that opened an airplane painting business, said English. Northrup Grumman had been leasing a spot when it had connections with Cochise College, but the program was ended and the company left the airport. The Forest Service also was using airport space, but it lost funding and left.

She said BDI has no curb appeal and suggested the old buildings be torn down.

“It’s a gem and we need to protect it,” she said. “We’ve kept up the runways, but I’ve never understood why the buildings have never been kept up. I’ve been after this for the past 30 years.”

Costs for the well total $250,000, which would be funded by the Airport Enterprise Utility Fund.

Meraz requested a work session with the supervisors to get an idea of how they want to move forward on the myriad projects he sees in the coming years.