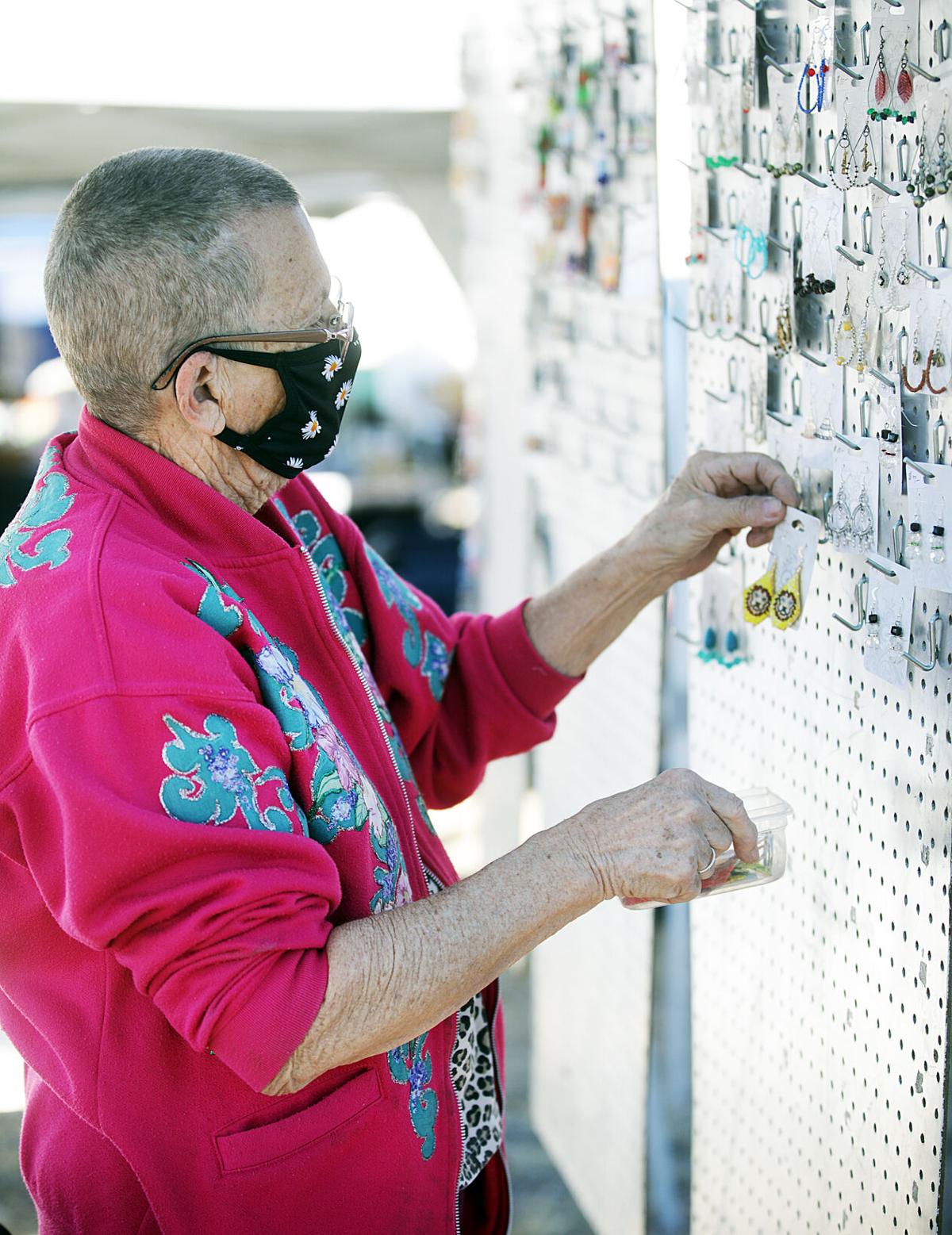 The Earring Lady, Inez Lemon, sets up her handmade pieces as Saturday’s Bisbee Farmers Market gets underway at the La Ramada Steakhouse and Cantina on Naco Highway. 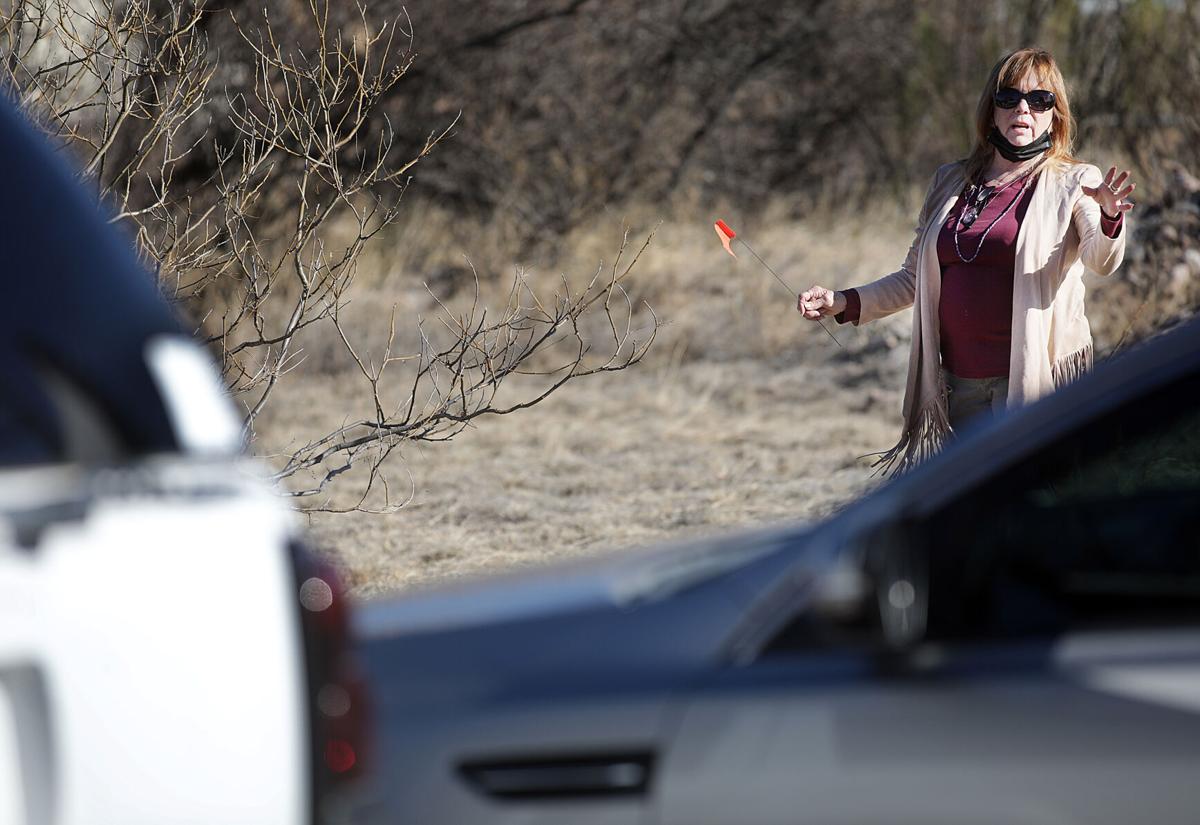 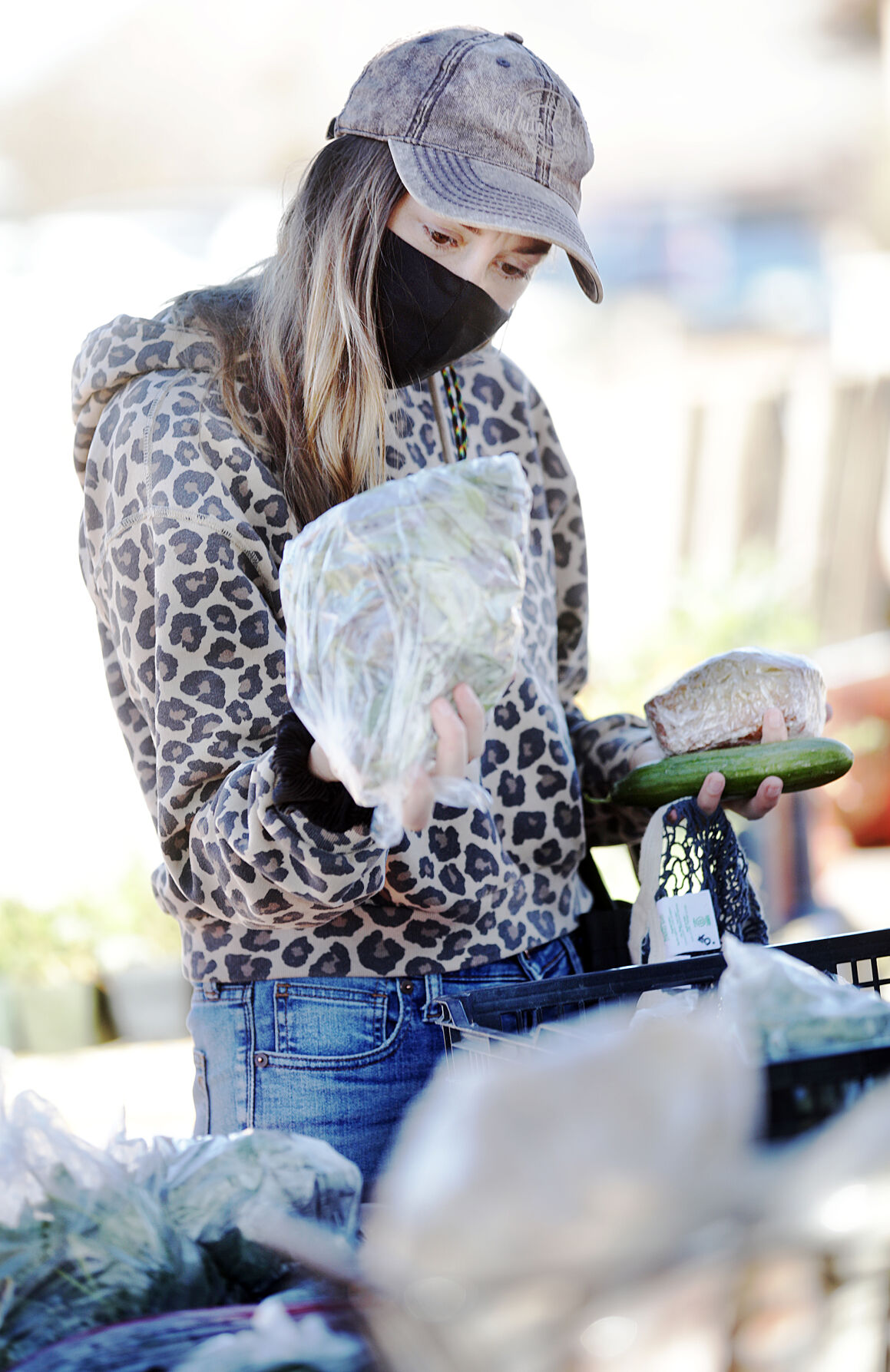 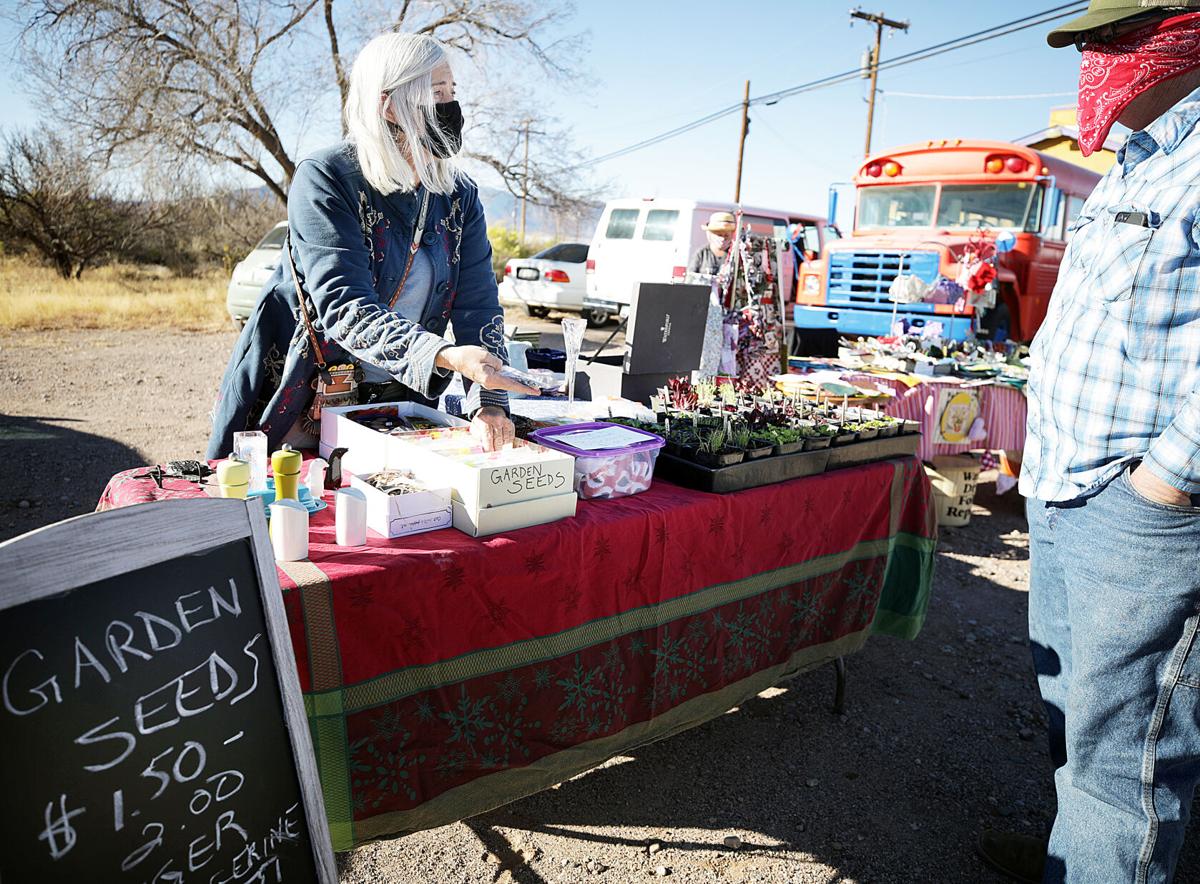 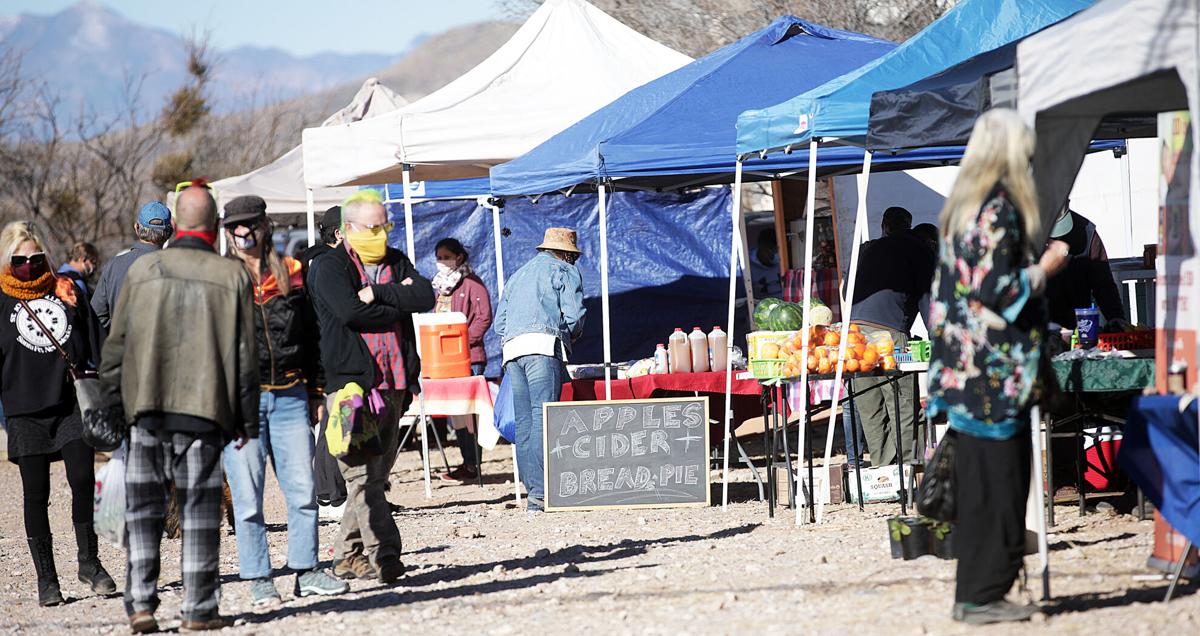 The Bisbee Farmers Market opens its doors for the first time in the parking area of the La Ramada Steakhouse and Cantina on Naco Highway.

The Earring Lady, Inez Lemon, sets up her handmade pieces as Saturday’s Bisbee Farmers Market gets underway at the La Ramada Steakhouse and Cantina on Naco Highway.

The Bisbee Farmers Market opens its doors for the first time in the parking area of the La Ramada Steakhouse and Cantina on Naco Highway.

BISBEE — Overflow parking lined Naco Highway Saturday morning as the 20th anniversary of the Bisbee Farmers Market kicked off and reopened in a new location at La Ramada Steakhouse and Cantina.

It was an indication of just how much people missed getting their weekly farmers market fix, as a few hundred people stopped by to check out the 45 vendors offering a variety of veggies, meats and crafts and even knife sharpening.

Oldies played by Bisbee’s own Los Amigos musical group added a festive sound to the morning.

Hereford produce vendor Donna Henricks came loaded with 74 bags of greens and radishes from her gardens and was down to just four by 10:30 a.m.

She said she has been working the farmers market in Bisbee and Sierra Vista for a few years.

“I wanted to see what the change would be like at the new location,” she said. “I like it here.”

Nicole Welch, who helps coordinate the market, was guiding people to parking spots. She said, “It looks like we have more people than we did in Vista Park. It’s a phenomenal turnout. The vendors just kept coming.”

Ranchers Dennis and Deb Moroney, under the Sky Island brand, brought all natural Criollo beef and Navajo Churro lamb raised with no hormones, grains or antibiotics on the 47 Ranch. He figured he would sell about the same amount he sold at the previous location in Vista Park, but that did not hold true. He was almost sold out in the first two hours.

“I was totally blown away by the turnout,” he said. “This is really wonderful validation from the Bisbee community. We saw a lot of new faces coming to see what we had. I’m happy about the new location. And the people are impressed with it.”

Laura Smith, organizer of the Bisbee Farmers Market, was bustling about talking to the shoppers and the vendors. Many told her the new location was better than Vista Park, in the heart of the Warren District.

When the annual contract between the Bisbee Farmers Market and the city came due, she was told she would have to pay far more for the Vista Park facilities than in previous years. Though she tried to work with the city, she could not agree to the $13,000-a-year contract the city wanted her to sign.

Lorena and Savannah Rogers, owners of La Ramada Steakhouse and Cantina, offered the site for the market and after looking it over, Smith took the offer.

“I love the restaurant and cantina,” she said. “It’s so southwestern. It has that energy. Something like this was needed for the San Jose District.

“Everyone is thanking us. One of my key things was to bring the music back. Our musicians need to play and make money and we need the joy of music in our lives.”

This weekend, Flamenco dancing and singing by Mahavia, a duo of locals Darrin Crosby and Juliana Thomas, will be the entertainment.

“We’re going to continue to have music by our local musicians,” said Smith.

She pointed out the importance of providing a place for the produce growers to sell their vegetables so they did not waste the crops.

The problem with the fees is due to a lack of having a structure for an event 0ne day a week throughout the year. The mayor and City Council are in the process of adding a permit fee to cover a weekly, yearlong event like the farmers market.

However, Smith is not interested in taking the Bisbee Farmers Market back to Vista Park.

“Everyone likes it here, but we have some things to do on the property,” she said. “My goal was to get the farmers market up and running, then solve any problems.”