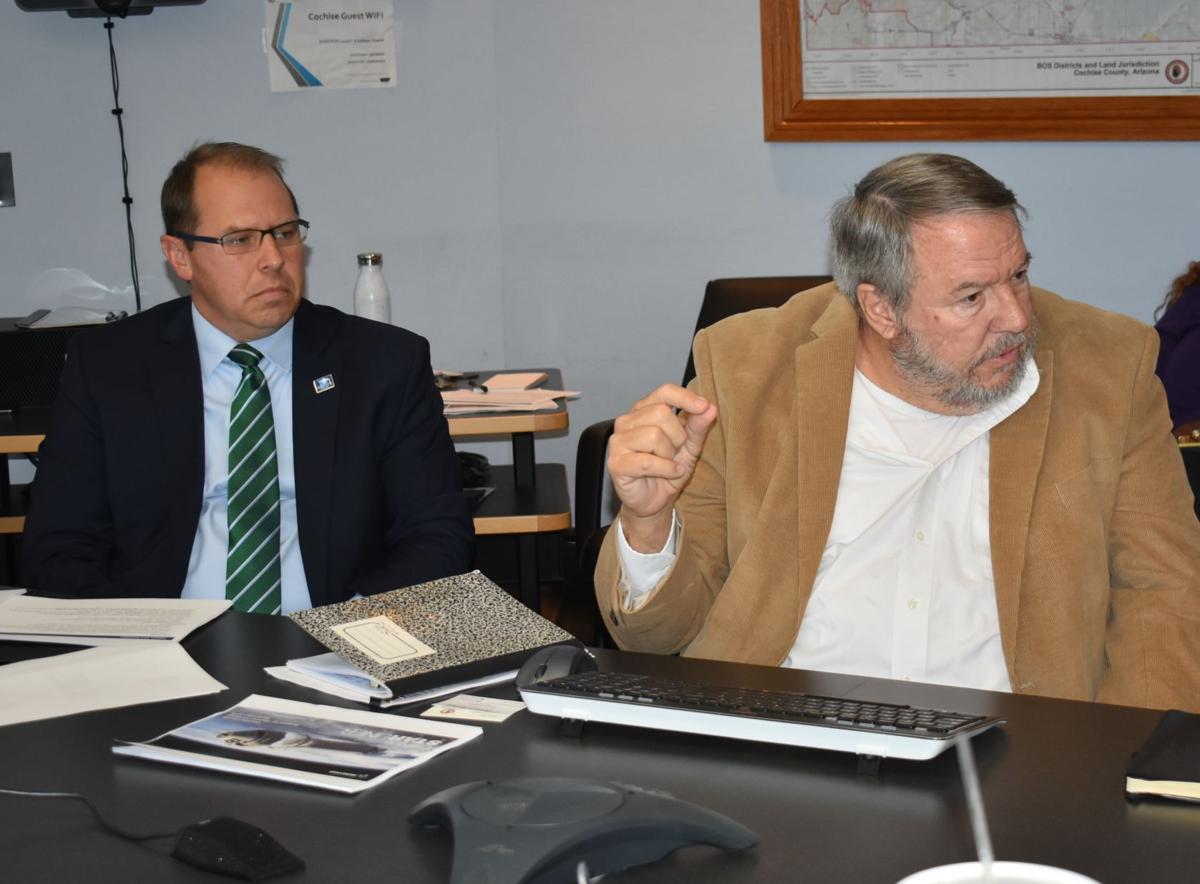 Boeing Southwest Region National Strategy Manager Mark Gaspers (L) and Boeing Ground, Landing and Recovery Manager Marty Linde gave an in-depth overview to the County Board of Supervisors Tuesday in a work session on the proposal to add a landing site on U.S. Army-owned land in the Willcox Playa. 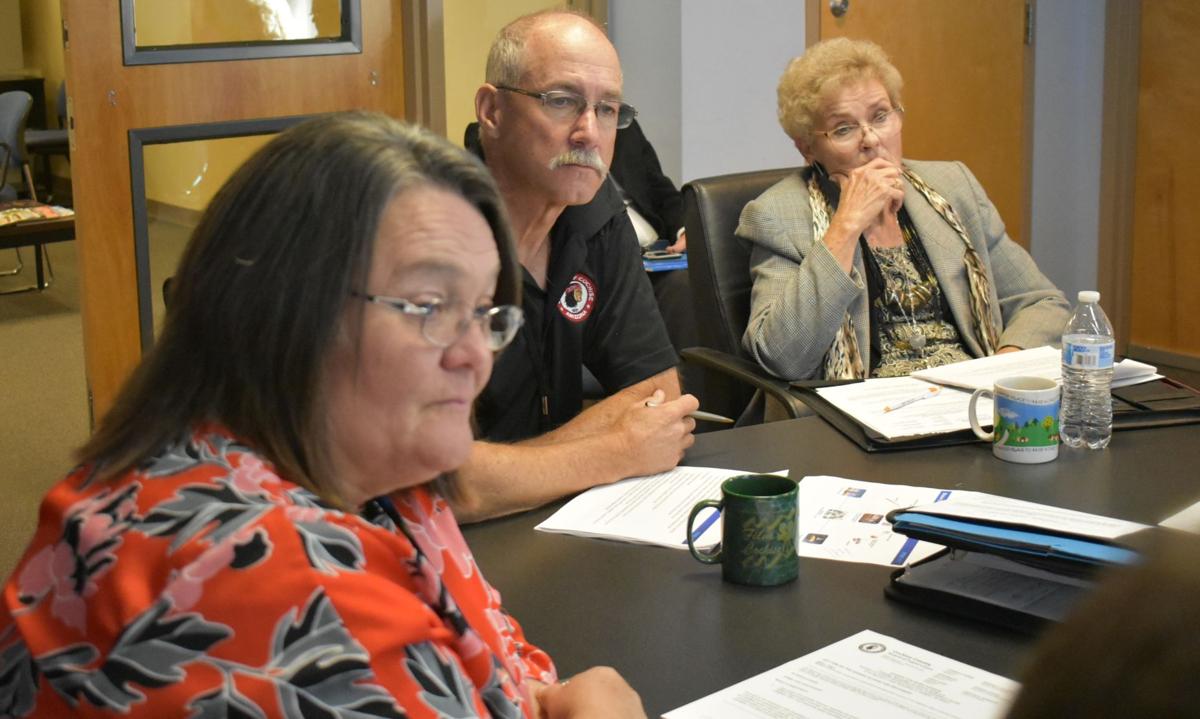 Cochise County Board of Supervisors Peggy Judd, Tom Borer and Ann English listen Tuesday to Boeing representatives as they explain a plan to construct a landing site for the Starliner space capsule on U.S. Army-owned land in the Wilcox Playa.

Boeing Southwest Region National Strategy Manager Mark Gaspers (L) and Boeing Ground, Landing and Recovery Manager Marty Linde gave an in-depth overview to the County Board of Supervisors Tuesday in a work session on the proposal to add a landing site on U.S. Army-owned land in the Willcox Playa.

Cochise County Board of Supervisors Peggy Judd, Tom Borer and Ann English listen Tuesday to Boeing representatives as they explain a plan to construct a landing site for the Starliner space capsule on U.S. Army-owned land in the Wilcox Playa.

BISBEE — Twice a year, possibly beginning in December, county residents and visitors may turn their eyes to the skies above Cochise County for a very different kind of rare bird, the newly-imagined space capsule of Boeing, the Starliner.

The site would be positioned on land in the Willcox Playa owned by the U.S. Army and U.S. Bureau of Land Management.

Currently, the U.S. spends millions of dollars using Russian launch rockets to send crews, supplies and equipment up to the International Space Station, Linde said. However, with the CST-100 Starliner launched into orbit via the U.S. Atlas V Rocket from Cape Canaveral Air Force Station in Florida, with improved capabilities for a soft landing on land, not sea, will save money, Linde noted.

The Playa is just one of five preferred landing sites in the U.S., he continued. There are two at White Sands Missile Range in New Mexico, and one each at Dugway Proving Grounds in Utah and Edwards Air Force Base in California.

The Cochise County site is preferred because of the salt flats of the Playa. It provides a flat surface for landing the Starliner.

“I’m amazed at the Playa,” Linde said. “What a piece of cake this is going to be.”

The Starliner is a new breed of spacecraft and has three 104-foot diameter parachutes to slow the craft to 26 feet per second during descent. A softer landing is achieved thanks to giant airbags which inflate before hitting the ground and stabilizers which allow it to stay upright on uneven ground, Linde said.

In addition to county staff, Boeing representatives have talked with Fort Huachuca, Cochise County Sheriff’s Office and other emergency agencies within the county and state, and found them receptive, he added.

Linde said it would be hard to forecast the weather, particularly windy days, and there would not be much advance notice when it came to determining at which site the capsule would land. The county could know a few days ahead or only a few hours, depending on the circumstances.

Since the teams which retrieve the capsule are from out of state, local authorities may have to secure the landing site and be prepared for a variety of problems, including the release of the chemical hydrazine, a fuel used in space travel that can be deadly to humans if inhaled and can cause fatal burns.

The site needs to be dry and the Willcox Playa flats are ideal, as long as it does not rain.

Supervisor Peggy Judd pointed out she and the Willcox-area residents want to reclaim water which falls on the Playa in the monsoon to recharge the troubled Willcox aquifer.

County Emergency Services Coordinator Gabe Lavine has analyzed the impact and hazards at varying distances from the landing site. For the return and adjustment for the descent, the fuel hydrazine is used, but the capsule could land with some still aboard. It would require specialized cleanup due to its toxicity. There are also potential problems with petroleum, oil and lubricants (POLs) and other chemicals in small amounts.

According to Fort Huachuca results from ground penetrating equipment surveys, there should be no problem with unexploded ordnance lying about the playa from old bombing run trials.

Boeing has hazardous material teams which would be called in an emergency, but the county and state would have to secure the site until the team arrived, Linde explained.

Lavine and Cochise County Sheriff Mark Dannels said they have already been in talks with the state and local officials and emergency services and have a plan should an emergency occur. An ambulance will be onsite for landings.

There was also discussion on the closing of county roads and banning aircraft over the strategic area.

Linde explained some roads could be closed for as long as five hours or more as the craft is cleared of the crew members and whatever else was sent back.

Dannels said it would take 55 deputies, plus Arizona Department of Public Safety, Fort Huachuca and other agencies within the county to secure the huge rural area. All costs would be paid by Boeing.

With the possibility of hosting a curious public, Lavine said he was working with Willcox officials to find an appropriate site for viewing the Starliner landing.

There is much more to be heard about the landing site. The county and Boeing will hold a public meeting at 6 p.m. on Wednesday at the Willcox Community Center, 312 W. Stewart St.

The Starliner is a reusable spacecraft that combines a proven capsule architecture, materials and subsystem technologies with 21st century innovations.

The Starliner’s economic impact can be seen across the United States, with more than 425 suppliers in 37 states.

An innovative weldless design eliminates the structural risks of traditional welds, and it also reduces mass and production time.

Boeing-developed training devices provide Starliner crews extensive training on the most technologically advanced, proven and integrated systems, ensuring astronauts learn how to handle any situation that could arise in the harsh environment of space, even with a spacecraft that is designed to be autonomous.

In addition to both a crewless and a crewed flight test, NASA has ordered six Boeing crew rotation missions to the International Space Station aboard the Starliner, which will be Boeing's first commercial human spaceflight missions.

Every American spacecraft that has carried astronauts into space was designed and built by Boeing or Boeing’s heritage companies.

For more information on the presentation by Boeing and the county, visit the site at: http://agenda.cochise.az.gov/agenda_publish.cfm?id=&mt=ALL&get_month=11&get_year=2019&dsp=ag&seq=1804

Willcox Playa, the largest "dry lake" in Arizona, is a remnant of the pluvial Lake Cochise. Unlike similar dry lakes, the black mud below the surface contains a rich fossil pollen record of the pluvial periods of the Pleistocene. The site has become a night-time roosting area for 4,000-8,000 sandhill cranes and contains the greatest diversity of tiger beetles in the United States.