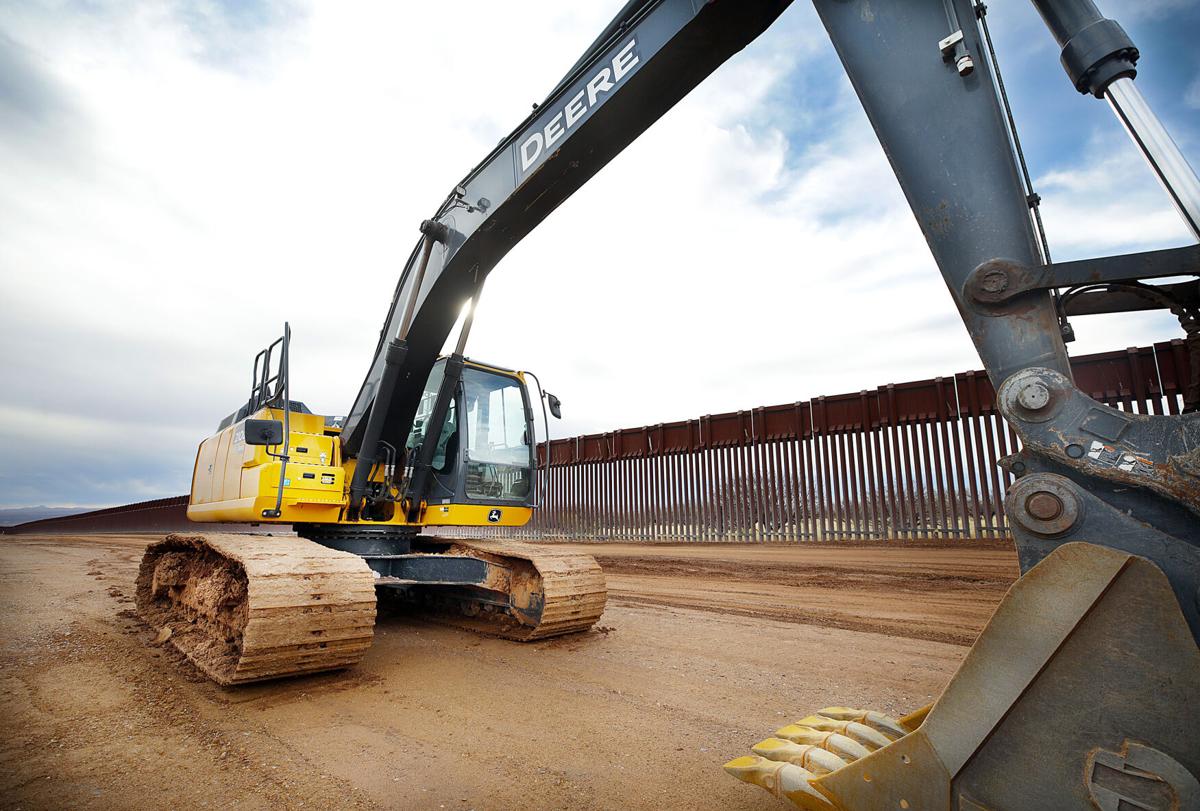 Most border wall work has stopped along the United States/Mexico border.

A piece of construction machinery can be seen at the higher elevations of the Huachuca Mountains as it sits unused while fence construction is at a halt in Cochise County. 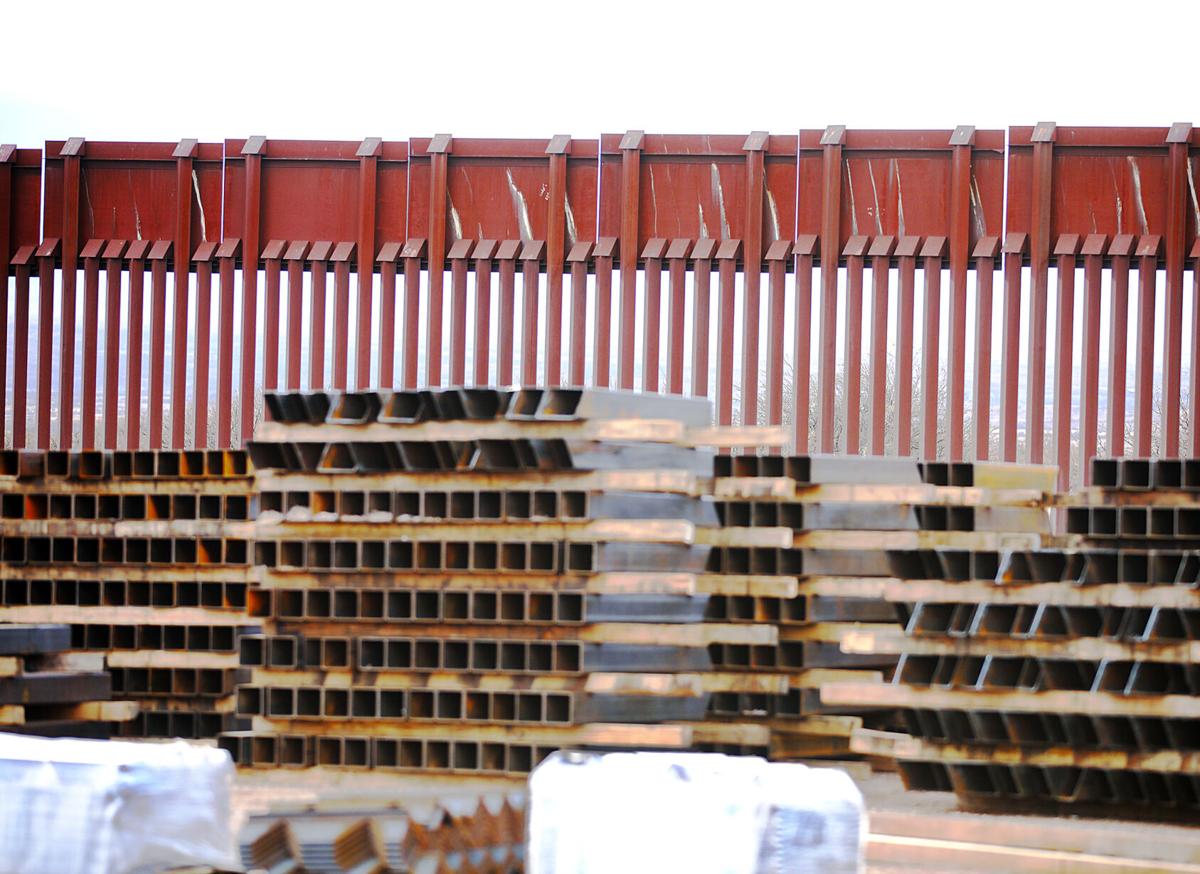 At a border fence worksite, stacks of fencing material sits as construction has stopped. 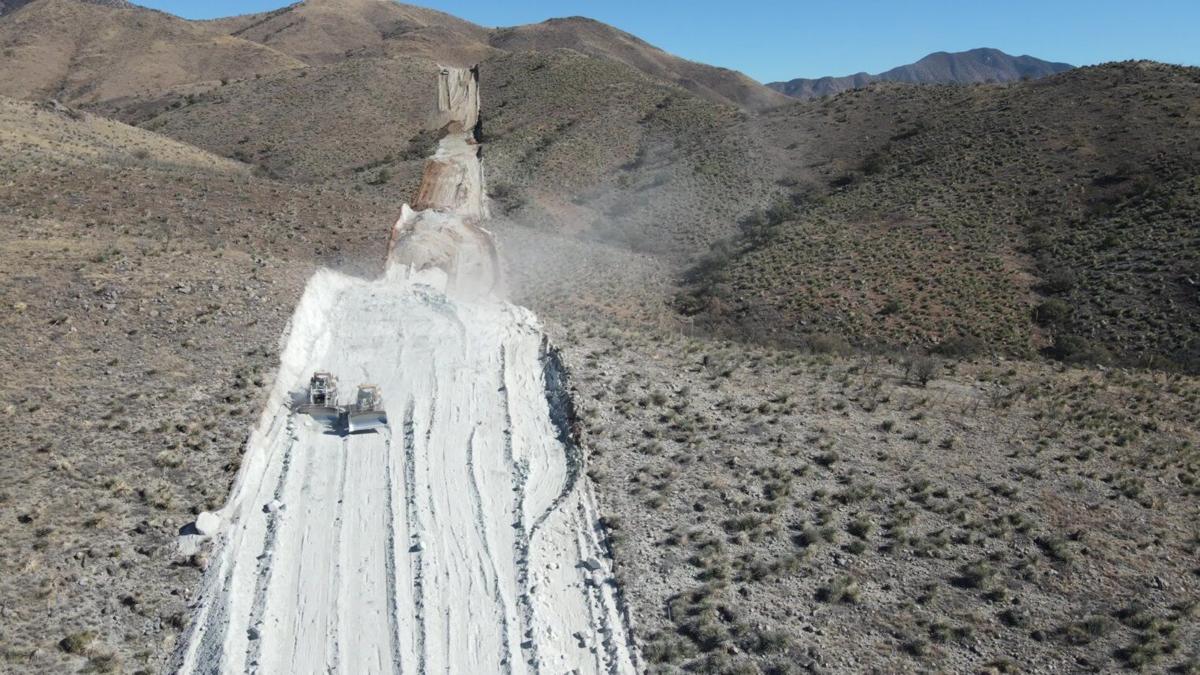 Work in the most eastern part of the county appeared to be ongoing last week after President Biden's Executive Order to stop work. Officials said the only work being done was to safely prepare each site for a suspension of work.

Most border wall work has stopped along the United States/Mexico border.

A piece of construction machinery can be seen at the higher elevations of the Huachuca Mountains as it sits unused while fence construction is at a halt in Cochise County.

At a border fence worksite, stacks of fencing material sits as construction has stopped.

Work in the most eastern part of the county appeared to be ongoing last week after President Biden's Executive Order to stop work. Officials said the only work being done was to safely prepare each site for a suspension of work.

COCHISE COUNTY — All the wall construction vehicles and equipment of Southwest Valley Construction Co. has been removed from various sites along the border, including those locations in Cochise County, according to environmentalists who have been tracking the wall’s progress.

Kate Scott, co–founder and director of Madrean Archipelago Wildlife Center in Elgin, told the Herald/Review, “As of Jan. 27, my husband and I confirmed that border wall construction had stopped at the Coronado Memorial in the Huachuca Mountains.”

Following through on President Joe Biden’s executive order on Jan. 20 to stop work on the border wall within seven days, the U.S. Army Corps of Engineers issued a statement on Jan. 21: “Upon receipt of President Biden’s Proclamation with respect to the southern border of the United States, the U.S. Army Corps of Engineers has directed our contractors involved in border barrier construction for the Department of Defense program not to install any additional physical barriers. Only construction activity that is necessary to safely prepare each site for a suspension of work will occur over the next few days. As we pause this program, we will work closely with the Department of Defense and Department of the Army to ensure public safety and a responsible use of taxpayer dollars.”

Customs and Border Protection followed with a statement: “CBP, in coordination with the U.S. Army Corps of Engineers, has suspended wall construction projects except for activities that are safety related. All projects are in compliance with the President’s Proclamation.”

Biden, who signed the executive order right after his inauguration, said, “Building a massive wall that spans the entire southern border is not a serious policy solution. It is a waste of money that diverts attention from genuine threats to our homeland security.”

It was just one of a number of executive orders reversing actions of the Trump Administration Biden signed that day, but to thousands of people from Texas to California, it was a much anticipated reprieve of the destruction wreaked across the border that impacted fragile desert ecosystems, ancestral concerns of Native American communities and crucial wildlife migration corridors.

Laiken Jordahl, borderlands campaigner at the Center for Biological Diversity, told the Herald/Review, “The president’s quick action on this executive order is an important step toward repairing the senseless destruction and xenophobia that have shattered the borderlands for four years. We’re hopeful this leads to an end to wall construction and to healing for communities and wildlife.”

Jordahl said of continued work on Jan. 21, “Construction crews at Coronado Memorial are plowing full steam ahead. Instead of demobilizing per yesterday’s proclamation, they’re continuing to excavate and bulldoze mountaintops through critical jaguar habitat.”

Scott saw the contractor was “actively bulldozing and setting up bollard panels from Sasabe to the Huachuca Mountains last Friday and Saturday which elicited concern and resulted in a call to USACE public affairs officer Jay Field. He asked for coordinates and the drone video of the construction.

Field’s response was: “As I work with the team to characterize the specific types of activity you’re seeing, I want to reiterate that we are in compliance with the president’s proclamation. Only construction activity that is necessary to safely prepare each site for a suspension of work has been taking place.”

For rancher John Ladd, whose ranch lies on the border, the order to stop construction was not good news.

He said Friday, “It’s a bad deal. They need to finish it down here. There are still gaps at the low water crossing. They were supposed to finish it up this month.”

He said the gaps were allowing illegal immigrants to cross.

“It needs to be finished,” added Ladd.

Glenn Spencer, who lives just west of the San Pedro River, has been sending his drone up almost daily to watch the wall construction. He has been opposed to the wall and wanted the government to plan other steps. He has watched the progress of the construction leg through the Coronado Memorial, which is heading up a mountain.

He said, “It’s a good thing they shut it down. It’s not thought out.There was no actual assessment of the need for the wall as far as I can tell. It’s overkill. They’ve built a road that cost millions and millions of dollars for the Border Patrol to use. They’re not going to be able to reach anybody up that mountain.”

Spencer has flown his drone over a portion of the wall in the Patagonia Mountains in Santa Cruz County, which has a similar grade to the Coronado Memorial.

“It’s like going straight up the mountain,” Spencer said. “I’m glad to see it stopped. There has already been tremendous damage to the environment. It was not properly planned.”

The status of the lawsuit

Three areas in the county were funded through the previous administration’s emergency declaration, which appropriated funding from the Department of Defense, the Drug Enforcement Administration and other budgets: the San Bernardino Wildlife Refuge Area, the San Pedro Riparian Wildlife Area and the Huachuca Mountains.

Environmental and community organizations sued the Trump administration, Department of Homeland Security and other government agencies to halt the construction since the money used was misappropriated and not approved by Congress. Though the lower federal courts agreed with them, they rejected the request to stop work until the case was resolved. It has gone to the U.S. Supreme Court.

Jordahl stated, “We must also begin the process of restoring all that Trump’s wall destroyed. This will include removing sections of barriers in places like the San Pedro River and Huachuca Mountains where they are causing immediate environmental harm, and restoring full environmental protections to the wildlife and wildlands of our beautiful border region.”

Traphagen, who monitors wildlife through Cochise, Santa Cruz and Pima counties, said, “There may be a permanent resident jaguar in Arizona now, and not by its own choice. There is a 70-mile-long stretch of 30-foot border wall from three miles west of the New Mexico state line to the Huachuca Mountains. Unless this cat goes around this wall then it’s here to stay.

“Most places where the border wall was built in Arizona are places that are exceptionally high in biodiversity and have important migration routes between the U.S. and Mexico. Several sensitive aquatic habitats have been affected like San Bernardino national wildlife refuge in Quitobaquito Springs and the San Pedro River.

“It’s not just charismatic species, like the jaguar, that are being affected, but notably the common everyday animals that we all see like javelina, bobcats, mountain lions and Whitetail deer.”

Traphagen pointed out the border wall may be responsible for poor deer hunt results this year.

“It doesn’t surprise me given the fact that the ranges of local deer populations, which go back and forth between the US and Mexico, have been significantly reduced by the border wall,” he said. “In a climate that is getting hotter and drier with less surface water availability, wildlife need more space and access to food and water, not less.”

Bureau of Land Management cameras have captured a few photos of the elusive jaguar recently and there have been sightings of a male jaguar over the past four years, according to Arizona Game and Fish.

With construction stopped, the hope of repairing the damage done and restoring wildlife corridors is growing.

Scott said, “My No. 1 priority will be working with Customs Border and Protection and others to open this vitally important wildlife corridor.”

To that end, 18 community and environmental organizations formed a coalition and asked the Biden Administration in a letter to immediately cancel all border wall contracts with remaining funds diverted to other purposes, including to mitigate harms from the wall and wall removal. They ask for immediate action to restore the fragile and ecologically sensitive areas negatively impacted by wall construction.

Further, they want to have all border walls removed, move toward responsible, humane border management, and promote unity and harmony between Mexico and the United States. They want to restore equal protection under the law to the borderlands.

To report any continued construction

Portions of the Executive Order

A review of the legality of the funding and contracting methods used to construct the wall.

An assessment of the administrative and contractual consequences of ceasing each wall construction project.

An immediate pause to the obligation of funds related to construction of the southern border wall, to the extent permitted by law.

The pause shall apply to wall projects funded by redirected funds as well as wall projects funded by direct appropriations. The Secretary of Defense and the Secretary of Homeland Security may make an exception to the pause, however, for urgent measures needed to avert immediate physical dangers or where an exception is required to ensure that funds appropriated by the Congress fulfill their intended purpose.

The Secretary of Defense and the Secretary of Homeland Security, in coordination with the Secretary of the Treasury, the Attorney General, the Director of the Office of Management and Budget, and the heads of any other appropriate executive departments and agencies, and in consultation with the Assistant to the President for National Security Affairs, shall develop a plan for the redirection of funds concerning the southern border wall, as appropriate and consistent with applicable law. The process of developing the plan shall include consideration of terminating or repurposing contracts with private contractors engaged in wall construction, while providing for the expenditure of any funds that the Congress expressly appropriated for wall construction, consistent with their appropriated purpose. The plan shall be developed within 60 days from the date of this proclamation. After the plan is developed, the Secretary of Defense and the Secretary of Homeland Security shall take all appropriate steps to resume, modify, or terminate projects and to otherwise implement the plan.

Read the Executive Order at: https://www.whitehouse.gov/briefing-room/presidential-actions/2021/01/20/proclamation-termination-of-emergency-with-respect-to-southern-border-of-united-states-and-redirection-of-funds-diverted-to-border-wall-construction/