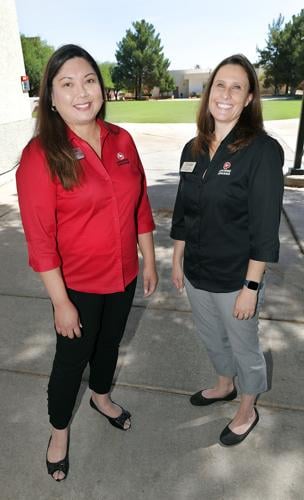 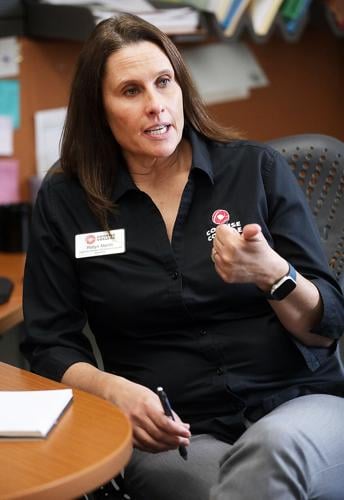 Robyn Martin, assistant dean of marketing, communications and advancement marketing, talks about the school’s ability to reach out nationally and internationally to appeal to students and instructors. 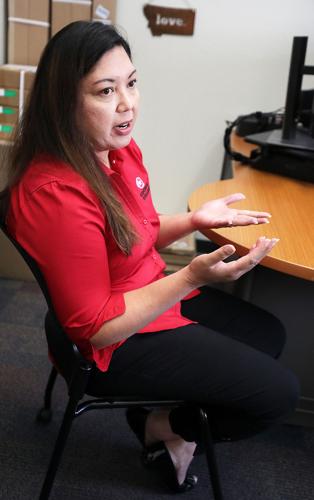 Cochise College PIO Sharrina Cook-General elaborates on why the school attracts a wide swath of students and instructors.

Robyn Martin, assistant dean of marketing, communications and advancement marketing, talks about the school’s ability to reach out nationally and internationally to appeal to students and instructors.

Cochise College PIO Sharrina Cook-General elaborates on why the school attracts a wide swath of students and instructors.

SIERRA VISTA — One of the first community colleges in Arizona when it was founded in 1964, Cochise College has transformed itself in nearly 60 years as a top-ranked, cutting-edge junior college boasting a 9,300 student population, attracting students as far away as Australia and Africa.

Known for its winning athletic programs, the school had a banner year for the Apaches’ men’s baseball, basketball and women’s rodeo teams. The men’s basketball team won its second straight National Junior College Athletic Association Region 1 championship and lost its bid for back-to-back district championships by nine points. It finished with a team record 29 wins and had one player named All-American Region 1 by the NJCAA.

Its baseball team compiled a 44-18 record, tied for second place in its conference, and went to the NJCAA regional championships. Two of its players were named All-Americans. The Cochise College women’s rodeo team, always a perennial power, won the University of Arizona spring rodeo in March. In 2019, its women soccer team won the Arizona Community College Athletic Conference, and its coach was named the ACCAC Coach of the Year.

Recognized nationally in various rankings that include the second and third top-ranked community college in the nation, the little junior college with six campuses didn’t just suddenly pop up as a significant educational institution all on its own.

Along with its charismatic president, Dr. J.D. Rottweiler, who has led Cochise for the last 12 years — noted for having its own school-owned airport built specifically for the college’s aviation program — it’s the school’s marketing team that has made remarkable strides in college recruitment both nationally and worldwide.

Steered by Assistant Dean of Marketing Communications and Advancement Robyn Martin, the six-person department which has doubled in size is as professional as a polished Madison Avenue marketing firm, operating on continual changes and trends it has learned to adapt to on the fly.

“We love to brag about this place because there’s a lot to brag about,” Martin joked. “I have absolute gems in this department who are self-starters and want to cross-train in every aspect of getting our message out.”

Their efforts have not been missed by Rottweiler.

“In the last two to three years, our college marketing has evolved and adapted by capturing data and enhancing communications to demonstrate the value Cochise College offers while also sharing our stories in and out of the classrooms,” he said. “Despite facing challenging obstacles from the pandemic, our marketing team continues to bring creative and innovative campaigns to illustrate why we do what we do while communicating our strategic priorities.”

The Herald/Review sat down with Martin and Cook-General to find out how the little junior college at the southernmost edge of the Arizona desert has made such inroads in recruiting and what attracts students from other states and countries to Cochise College.

Herald/Review: What increase or decrease over the past couple years has the college seen?

Robyn Martin: We have been trending pretty flat over the last few years without a significant increase or decrease in the overall student population. Nationally, community colleges have been seeing a decrease of around 5% over the last several years while we have been able to be rather stable.

H/R: What do you attribute that to?

RM: We emphasize the caring culture of the college to support the students. We foster a community where our students feel included and they know there are many people rooting for their success, rather than just being a number like they would be at a larger institution.

H/R: How does your department go about getting its message across?

H/R: On a more personal level, how have you reached out to potential students?

Sharrina Cook-General: Over the last couple of years, we have really focused on providing more of a hands-on and positive experience for students trying to attend Cochise. We implemented a calling campaign where staff members physically called students rather than just relying on email. We also increased our video messaging and tutorials to help students visualize what to expect at Cochise and to provide tutorials.

RM: Through market research, we have surveyed students to identify their needs as well as the community to determine how they value education.

H/R: Students come here from everywhere, not just locally. What states and countries are they coming from?

SCG: Because of our online offerings, we serve students all over the world. Some attend classes in person, but many attend via our online offerings as well. The top five states we’re seeing students coming from are Texas, Georgia, North Carolina, Florida and Hawaii. From other countries, it’s Africa, Australia, Brazil, Canada, Dominican Republic, France, Germany, Italy, Mexico and the Netherlands.

H/R: With so many junior colleges in the U.S. and learning alternatives in other countries, what is the draw for students from out of state and country coming to Cochise? Basically, what is it that Cochise offers that other institutions don’t?

RM: A lot of it has to do with our location in regards to weather and the proximity to the University of Arizona which many students want to eventually transfer to. We’ve seen a great deal of hits on our website from European students. But what potential students are learning about Cochise College is its caring faculty, that it’s affordable with a high return on its investment for students, its HyFlex course delivery method (in-person, online and livestream choices) and that it offers programs that most wouldn’t expect at a community college.

SCG: Through its undergraduate research program, students get to participate in opportunities where they are the only community college students. There is a big workforce shortage in the country in vital areas like air pilots, law enforcement and nursing. Potential students are seeing that Cochise has to offer through its aviation, police academy, behavioral health, licensed practical nursing – along with in-demand certifications in cybersecurity, virtual reality and its MOS (military) programs fill those needs.

RM: The college also has unique festivals/events like the Pit Fire Pottery Festival that attracts attention internationally. We get pottery entries from all over the world each year that are added to the pit. It’s also renowned for its competitive athletic teams.

SCG: Cochise College is currently working to expand its early college opportunities to county high schools so students can work toward their degree or certificate before graduating high school.

H/R: About how many students go on to four-year colleges after graduating from Cochise?

RB: From the statewide Strategic Vision report, our credential-seeking sub-cohorts have a transfer rate of around 30% to four-year colleges within six years. For in-state transfers, the majority of students attend the UofA followed by ASU and then NAU.

H/R: How are new trade skills decided upon and how do you know there is a need for them?

SCG: We work closely with industry partners in the county who often tell us what skills and training they need. That will often predict what programs we will try to offer in the future.

H/R: How does the college go about seeking out instructors for new trade courses?

RM: We use various methods: Networking in industry, LinkedIn and other employment recruitment methods and attend hiring fairs like those offered by AZ@Work and on Fort Huachuca.

H/R: What is it the marketing department does to get the word out about the college?

RM: We are the storytellers of the college. The mission of the marketing department is to communicate who we are, what we’re doing and why it’s important to you. And we have some great storytellers in this department. We have to stay on top of marketing trends for our audiences. We need to know who our audience is and where they are getting their information. We are constantly tracking our methods to see where people are engaging with us and adjusting our campaigns or adding new channels as needed.

SCG: We also try to understand our audience and provide content we think is relevant to their lives and relatable. We are also members of this community and many of us (employees) are either Cochise College students ourselves or have family members who are. I believe this allows us to really understand our audience and community because we only have to look to ourselves to ensure our message is understood.

RM: Because of our rural location, our most powerful marketing method is word of mouth. We always want to ensure we are providing positive experiences for our students and community. We can remain flexible to adapt to the needs of the county. Over a year ago we did a community needs survey and we plan to do another one this fall to get feedback directly from community members.

H/R: Since you have been here doing this, how has your role grown, expanded, changed?

RM: As the state of Arizona creates initiatives to encourage its citizens to achieve post-secondary education and attain skills and training credentials, our department focuses on campaigns to tell the community about them. In 2018 Gov. Ducey introduced Achieve60AZ. The college created some initiatives around those efforts and many of those were aimed toward graduating high school seniors. Our efforts focused more on campaigns to increase enrollment. Now, the college is evolving to support Arizona’s Reskilling and Recovery efforts that include workforce accelerator programs and providing more skills and training certifications to the community. Our department will pivot to provide awareness of new programs and opportunities that are being created.

SCG: Community is “our middle name” and at the end of the day, while the college’s mission is to provide educational opportunities to our community, the marketing department’s mission is to tell its stories.

Better than a comments section

Discuss the news on NABUR,
a place to have local conversations
The Neighborhood Alliance for Better Understanding and Respect
✔ A site just for our local community
✔ Focused on facts, not misinformation
✔ Free for everyone

Cochise College was recently recognized for 12 top programs in the U.S. by Intelligent.com. The research identifies programs based on flexibility, faculty, course strength, cost and reputation. Intelligent.com ranks each program on a scale from 0 to 100 across five categories. The scoring system compares each college/university according to program strength, student readiness, return on investment, cost and student engagement. Researchers compared 704 programs from 2,900 universities and colleges across the U.S.

Cochise College has been recognized for the following:

This offer is currently unavailable.