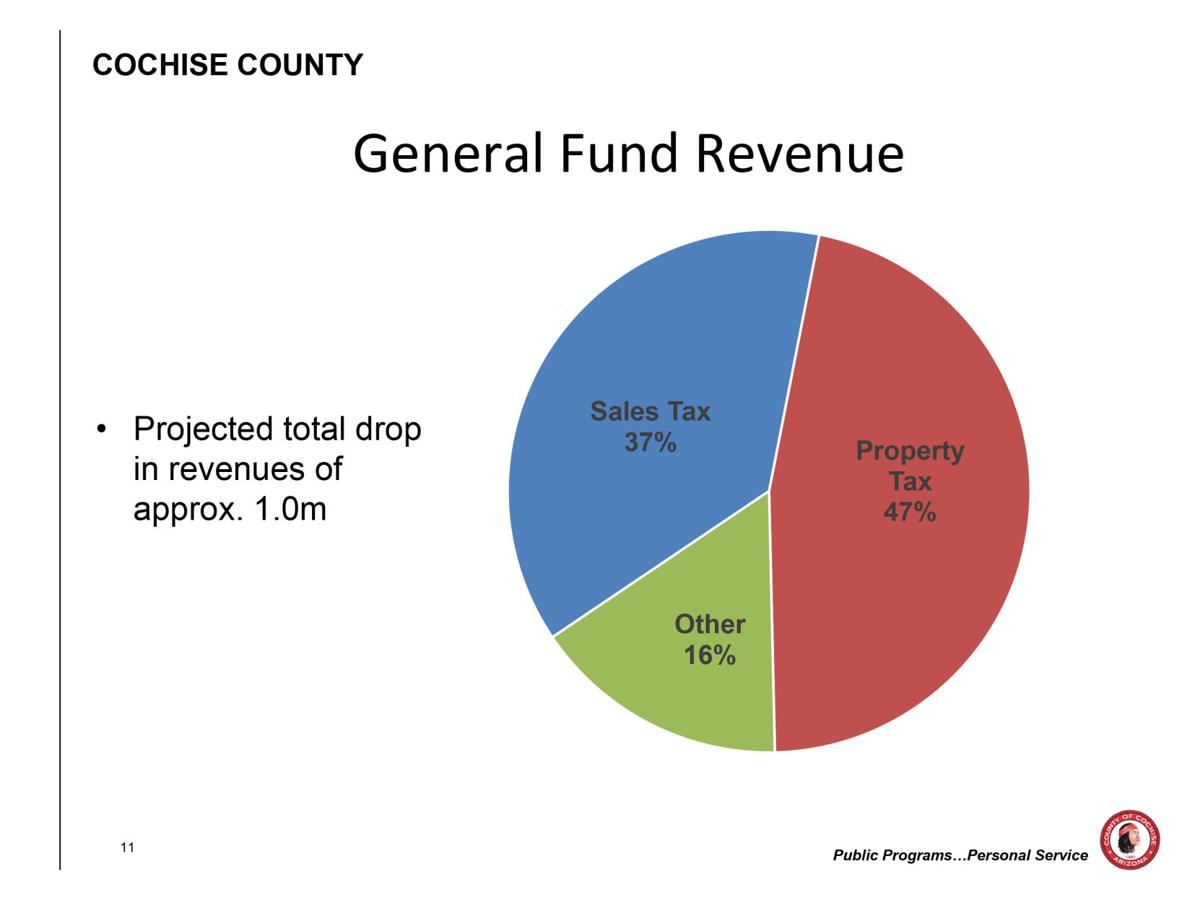 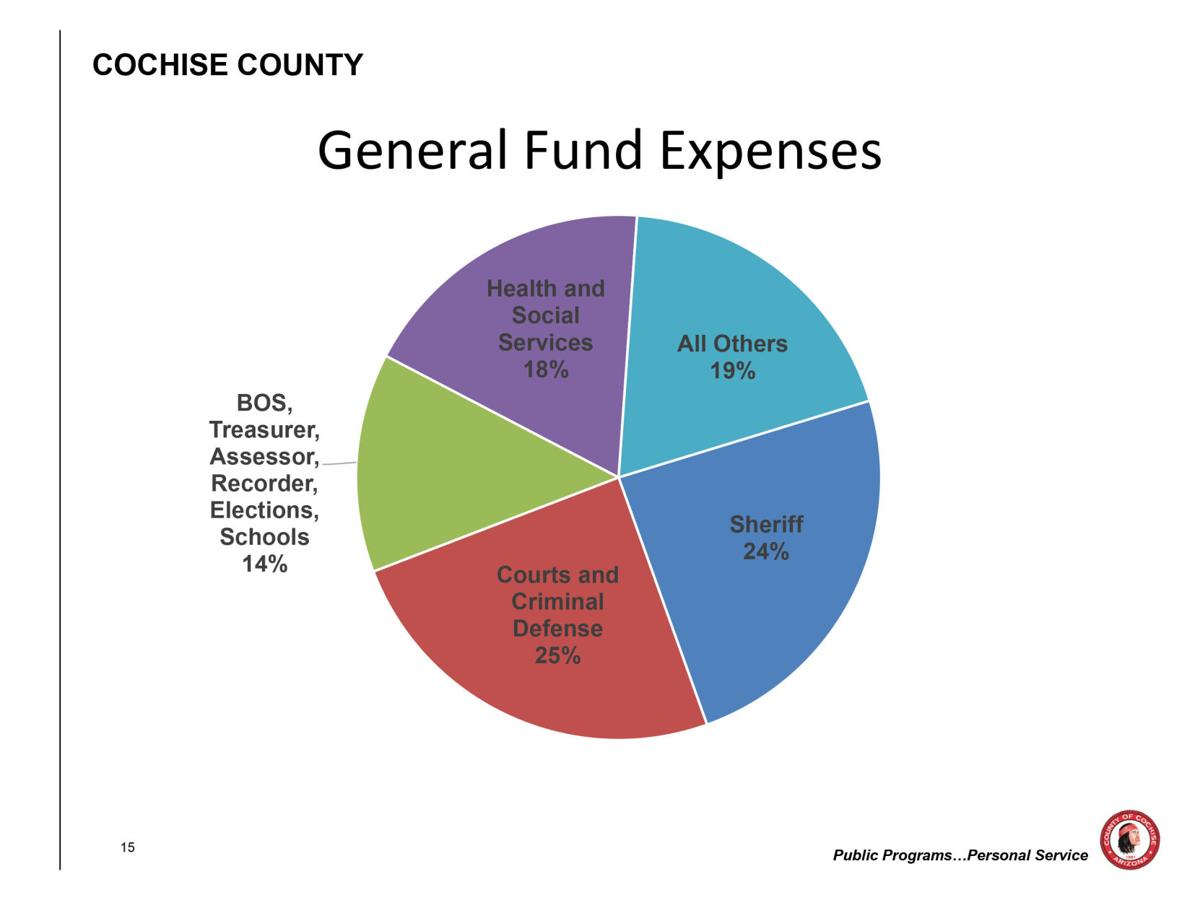 BISBEE — The Cochise County Board of Supervisors adopted the tentative 2020–2021 fiscal budget of $187,842,969 and set the date for the Truth in Taxation (TNT) hearing for July 14 during Tuesday’s meeting.

Higher property valuations and new construction has allowed Supervisors Tom Borer, Peggy Judd and Ann English, and supervisors before them, to keep from raising the tax rate.

TNT hearings are held when there is an increase in the amount of property tax collected.

Two big changes in the budget are the elimination of the supervisors’ Community Enhancement Funds, which provided $100,000 each to the three supervisors for special projects in their districts. Another is the closure of the Juvenile Detention Center in January which will save $525,000, Duchon said.

Sales tax revenues dropCounty Administrator Ed Gilligan again emphasized the unknowns of the coming months as far as sales tax collections are concerned. There is a two-month delay in the state shared sales tax distribution, so tax collected in April does not hit the county coffers until June.

In a graph showing the past five years, the county’s half–cent sales tax collection is actually a bit above what it has been since the 2014–2015 fiscal year, he said. The graph shows a far steeper decline than in previous years, however, and that has him concerned.

Though the June disbursement for the month of April was “not as tragic as anticipated,” he is still quite concerned about May and June revenues even though the state allowed reopening of businesses.

He noted the rise which began going up in January peaking in February as the tourism season began. It quickly plummeted in March, jumped up some in April and plunged again May and June, the normal quiet time when tourism declines.

With cash carried forward from the 2019–2020 fiscal year and the contingency fund, the county does have fall back money of around $25 million to cover expenses during the dry months which include wages, salaries, keeping the lights on and water running, maintenance and operations.

Gilligan said, “It took over a decade to build up our savings. But, our expenses are greater than our revenues. We need to hold back expenses wherever we can.”

English added, “There are counties that have let their people go. They have no funds and have to borrow. I don’t want us to be in that position.”

The savings keeps the county from borrowing money to get by until property tax comes in as well as the two sales taxes and any grant expenses awaiting reimbursement, Gilligan said.

English said, “I do not want to borrow money, but if we need to I’ll consider it. Everyone needs to understand looking at this budget, we may be asking departments and the electeds to cut costs. We need to play this budget three months at a time.”

Judd suggested brighter days would be ahead as more businesses opened up and events get back on schedule.

Retirement liabilities“We’re in a precarious situation,” Gilligan said as he discussed the Public Safety Personnel Retirement System (PSPRS). “They predicted a return of seven percent, but it has been less than two percent.”

The state would prefer the counties borrow money to pay down the PSPRS unfunded liability, which in the case of Cochise County totals $35.4 million. The county will pay $2.5 million the next fiscal year.

English stated, “Four years ago, we were looking at $24 to $26 million and we’ve been paying every dollar asked of us. And, it’s still growing. They just take out whatever they want. I don’t know when the Legislature will wake up.”

The Correction Officers Retirement Plan is in better shape, but the county has an unfunded liability of $6.3 million and that is just one account, for probation officers. A second CORP account for detention officers, which is funded through everyone enrolled in the pool, has an unfunded liability of $406.5 million. The county will pay a total of $885,002 for the two plans.

The county administration and the supervisors have joined others in complaining about the lack of oversight to the state legislators, but English said, “The feedback from the legislators is ‘It’s fixed.’ It’s a huge responsibility to the county and a huge reason why the county cannot spend down its savings.”

Gilligan said he is reluctant to even suggest going into debt by pooling all county assets and paying off what is owed, as the state desires, as there is no way to monitor or counsel how the funds should be invested.

There is also no guarantee the fund will see a seven percent return and the state will make no changes to how the retirement funds are disbursed such as setting a new retirement age to begin to collect or setting a lifetime limit on how much can be collected.

Hiring freezeThe supervisors held all the departments and electeds to a strict rule on new hires or added expenses to help keep costs down. The only way such expenses would be approved was if they could prove the additional cost could be made up through cuts to their budgets.

Costs continue to climb and holding a steady bottom line is imperative in the current economic climate, the supervisors agreed.

Depending on how the economy rebounds, they could revisit some requests.