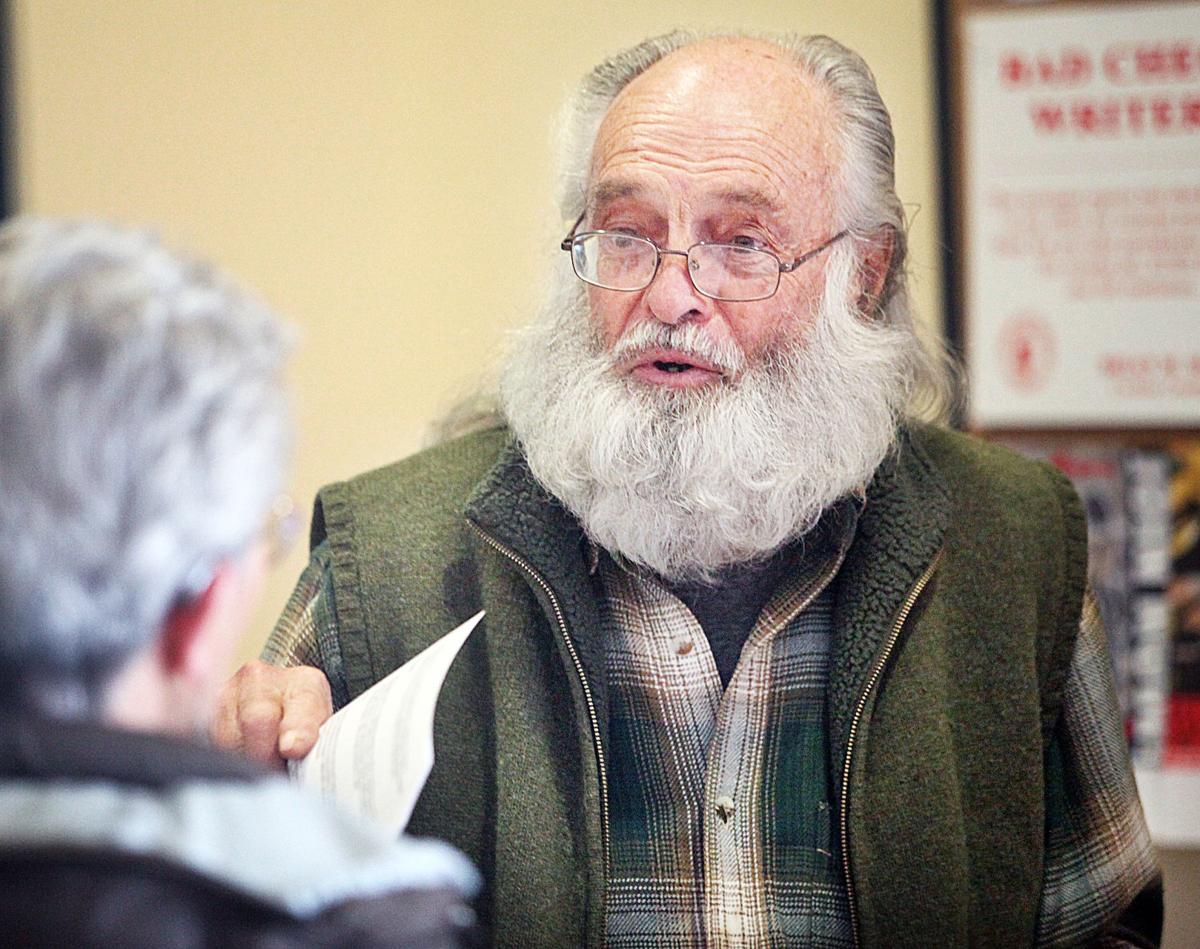 Michael Gregory was at Tuesday’s Cochise County Board of Supervisors meeting in Bisbee. Gregory joined others at the meeting to talk about the San Pedro River and the plans to build a border wall on it. 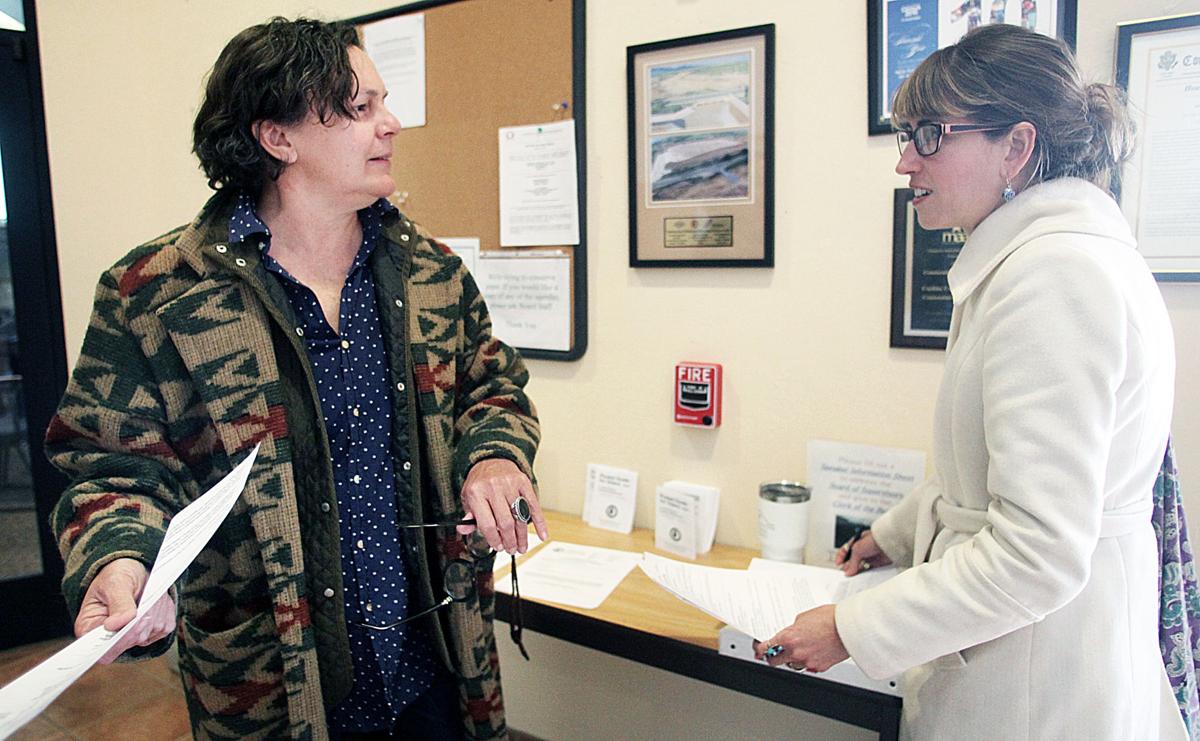 Cochise County resident Kate Scott, left, chats with Hereford resident Kimberly Kling prior to Tuesday’s county supervisors meeting at the county complex in Bisbee. Both were there to voice their views about building a border wall on the San Pedro River.

Michael Gregory was at Tuesday’s Cochise County Board of Supervisors meeting in Bisbee. Gregory joined others at the meeting to talk about the San Pedro River and the plans to build a border wall on it.

Cochise County resident Kate Scott, left, chats with Hereford resident Kimberly Kling prior to Tuesday’s county supervisors meeting at the county complex in Bisbee. Both were there to voice their views about building a border wall on the San Pedro River.

BISBEE — Though the Cochise County Board of Supervisors has little influence in federal matters, Tom Borer, Ann English and Peggy Judd unanimously agreed to reach out to U.S. Rep. Ann Kirkpatrick in a letter giving their support for her efforts to engage the federal government in talks about the border wall in the area.

Kirkpatrick already expressed her concerns to U.S. Customs and Border Patrol (CBP) in a January letter on the environmental impacts of border wall construction in the county and stated, “Constituents who live and work near the U.S.–Mexico border have shared alarming accounts about the construction activity.”

The letter from the supervisors to Kirkpatrick states, “The Cochise County Board of Supervisors is writing in strong support of your efforts to encourage the Department of Homeland Security (DHS) to engage with state and local agencies, as well as the general public, with regards to border barrier construction projects in Cochise County.”

They, too, have heard from constituents “who are highly concerned about the potential impacts of border barrier construction in this region” and they “are concerned about the lack of engagement between the federal agencies involved in this project and the general public. Considering that preparation work has already begun, we consider this to be a matter of great urgency and we appreciate your efforts on this issue. Should you wish to conduct a public meeting in Cochise County where the relevant agencies could share information, we would be happy to help accommodate such an event,” according to the letter.

English made it clear during Tuesday’s supervisor’s meeting, “We do not have any authority on the border wall. But, we do want to be included in the loop to be able to pass on information to the public.”

To those who attended the meeting, the appeal was appreciated, but did not go far enough. They asked the supervisors to hold a public work session with the federal agencies to obtain specific information about what is planned for the San Pedro River crossing.

“This is important to the county as a whole,” said activist Tricia Gerrodette, a Sierra Vista resident, who would like the county to hold a meeting with U.S. Customs and Border Patrol (CBP).

Helise Dubnick, from Bisbee, told them she talked to a Border Patrol agent who lives in the county who is also distressed about the impact on the river if a barrier is set in place. “We should know what is going on and how it affects our area and the ecosystem.”

McNeal resident Michael Gregory, who was instrumental in helping establish the San Pedro Riparian National Conservation Area of which the San Pedro River is the life blood, gave the supervisors credit for a “good step forward,” but asked then “to take a step further and talk with the Department of Homeland Security.”

He also commented on the dissatisfaction of the hundreds of people who met along the river in Hereford to protest a barrier across the river. “They should recognize the desire of people to know what is proposed.”

Kimberly Kling from Hereford read a note written by her six-year-old son Graysen, who said, “Can you please stop making the wall or put little tubes in the walls and jaguar flaps in the wall so water and animals can go through? Because you know the land is not yours. Nobody really owns the Earth. Plus, even if the land was yours, you should still share or nicely say no thank you.”

Kling added, “The cost of walling the river is just too great and it is reasonable to find other means of securing the border. I would like to ask that you be a voice for the San Pedro and for our children. Please expediently request a work session with DHS, CBP and the Army Corps of Engineers and allow the public the opportunity to review the plans and comment on them.”

Kate Scott, director at Madrean Archipelago Wildlife Center, reminded the supervisors of the vast number of species that fly, walk, swim and crawl in their SPRNCA home.

“We have one of the richest wildlife areas in the world,” she said.

Since the residents made their statements during the public comment portion of the meeting, the supervisors were unable to answer their pleas or agree to a more active stance on the border wall.

Kirkpatrick staff in the dark

Ron Barber, Kirkpatrick’s chief of staff, said in a phone interview she has yet to hear back from the DHS in response to her letters.

“Right now they’re not responding to letters. We can’t get a straight answer,” he continued. “We felt this was an urgent issue because they have already begun work. I believe the state agencies and other federal agencies, like the Bureau of Land Management, that have knowledge of the river, are also left out. They could learn from people on the ground.”

Kirkpatrick and her staff have seen the drone video of the work in progress at the San Pedro and were impressed with the turnout at the peaceful protest held Jan. 26, he said.

Barber said he was pleased to hear the supervisors were willing to host a meeting with the federal agencies involved and the public.

“They’re going to make a big mistake. We are calling on them to be more transparent, but they’re not saying anything. They’re just working. They have to have some respect for the local government and the people. The river is too precious to lose.

“She (Kirkpatrick) wants to bring the secrecy to an end and make sure that DHS and the Army Corps of Engineers release their wall construction plans and open up a dialogue with the people who actually know the River and how it flows,” he added.

“She also includes in her letter information about the importance of the river to the birds and animals that live there and the damage that could be done to the economy of the area. Ecotourists come from all over the country to see the diversity of wildlife on and around the river and that provides them with food and water. If the wildlife habitat is harmed, the wildlife will leave.”

Letter to the Supervisors

I like to look at the San Pedro River every day. It brings nature to life. I like to get muddy, find footprints, put my feet in the water, climb the dirt walls, chase crayfish and watch things go pop, pop, pop in the water. The water lets the really pretty trees live. The animals drink water and take baths and it lets minnows and fish get around. Please don’t bring the wall, because the river brings life to animals and trees.

Can you please stop making the wall or put little tubes in the walls and jaguar flaps in the wall so water and animals can go through? Because you know the land is not yours. Nobody really owns the Earth. Plus, even if the land was yours, you should still share or nicely say no thank you.”

Heard a presentation by Ken Drozd with the National Weather Service in Tucson formally recognizing Cochise County as a Storm Ready Community, one of only 33 in the state. He complimented the county’s emergency service coordinator Gabe Levine for his commitments to the community in keeping the public aware of weather conditions.

Heard a presentation by county deputy civil attorney Christine Roberts and chief paralegal Catherine Barney on the status of the civil division of the county attorney’s office.

Tabled an agenda item on the use of Community Enhancement Funds for Districts 2 and 3 consisting of cleanup projects.

Approved a $10,000 agreement between the county Sheriff’s Office and USDA Forest Service for overtime, employee related expenses and fleet costs for deputies to patrol various recreation areas of the Coronado National Forest through December.

Approved a sub-recipient agreement with the Arizona State Department of Homeland Security to accept $9,785 for use with the technical rescue equipment grant.

Approved a five-year contract with A&R Fire Protection for the maintenance of fire systems and extinguishers in all the county’s buildings for a total cost of $300,000, at the rate of $60,000 per year. County administrator Ed Gilligan said a previous contractor was costing the county over $100,000 a year and charged a separate call out fee for each building when working at the at the Melody Lane Complex.

Approved a five-year contract with Sloan King, psychiatrist, who will provide restoration to competency services for jail inmates at a cost of $15,000 per case. County chief civil deputy attorney Britt Hansen told the supervisors the rate was far lower than a contract in Pima County which was $40,000 per case. He said Sloan’s cost was far less and she would travel to the jail to treat inmates.