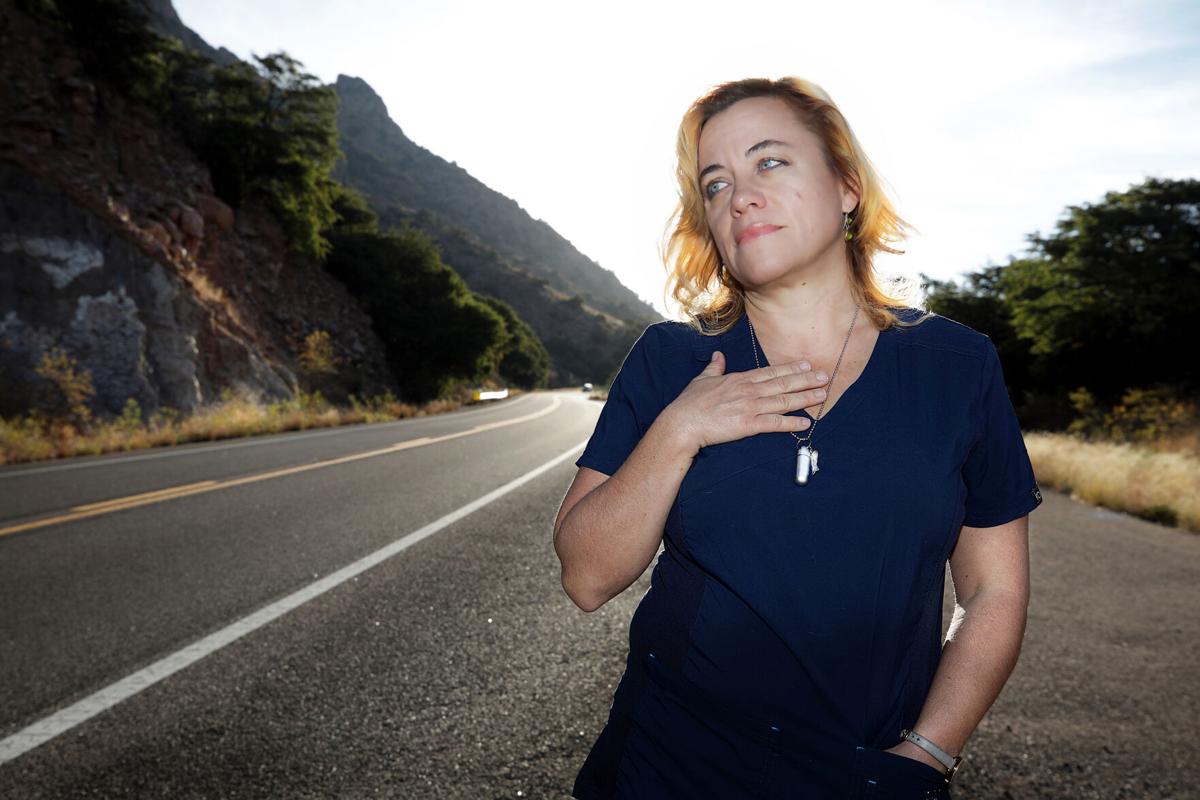 Accident victim Suzanne Walsh touches a necklace and locket containing cremains of her partner Benjamin Saffer on State Route 80 near Bisbee. Walsh and Saffer were hit head-on by a truck in August at the site. 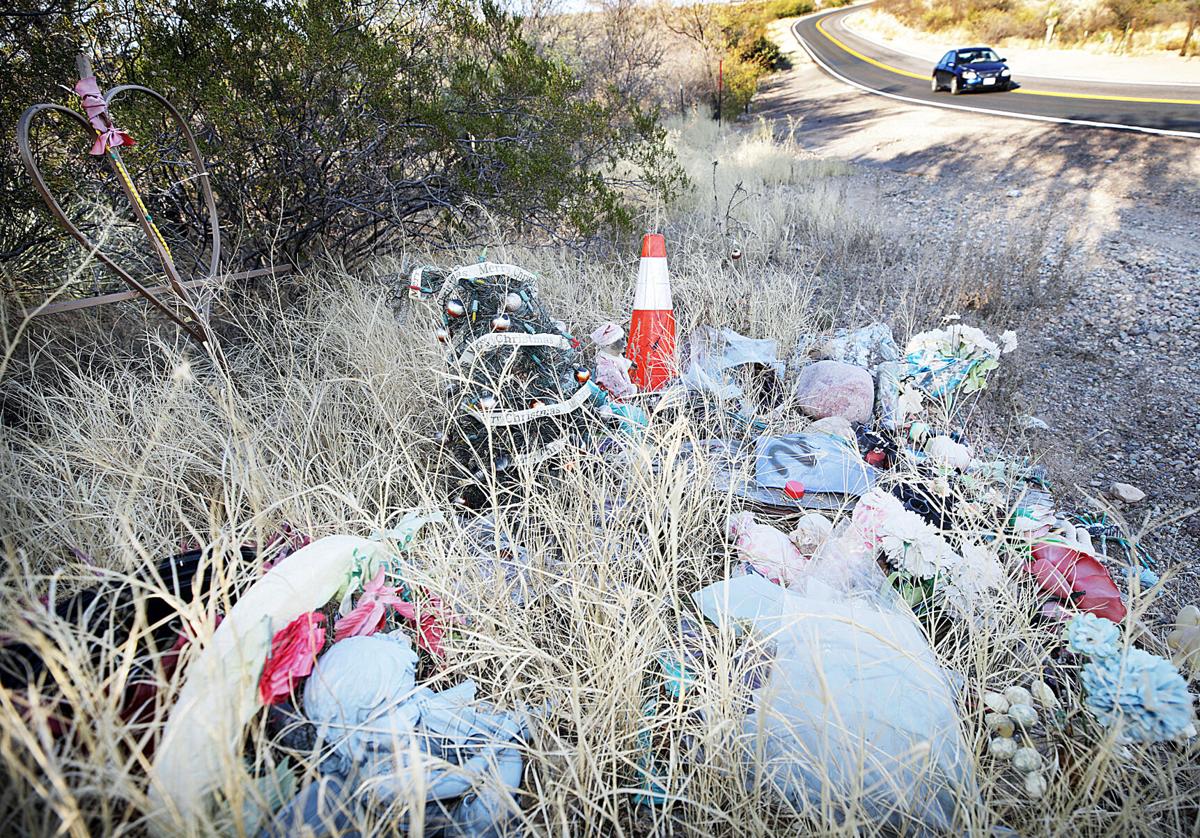 The roadside memorial for Melody Olson still remains from the December 2016 accident on Charleston Road near Tombstone. 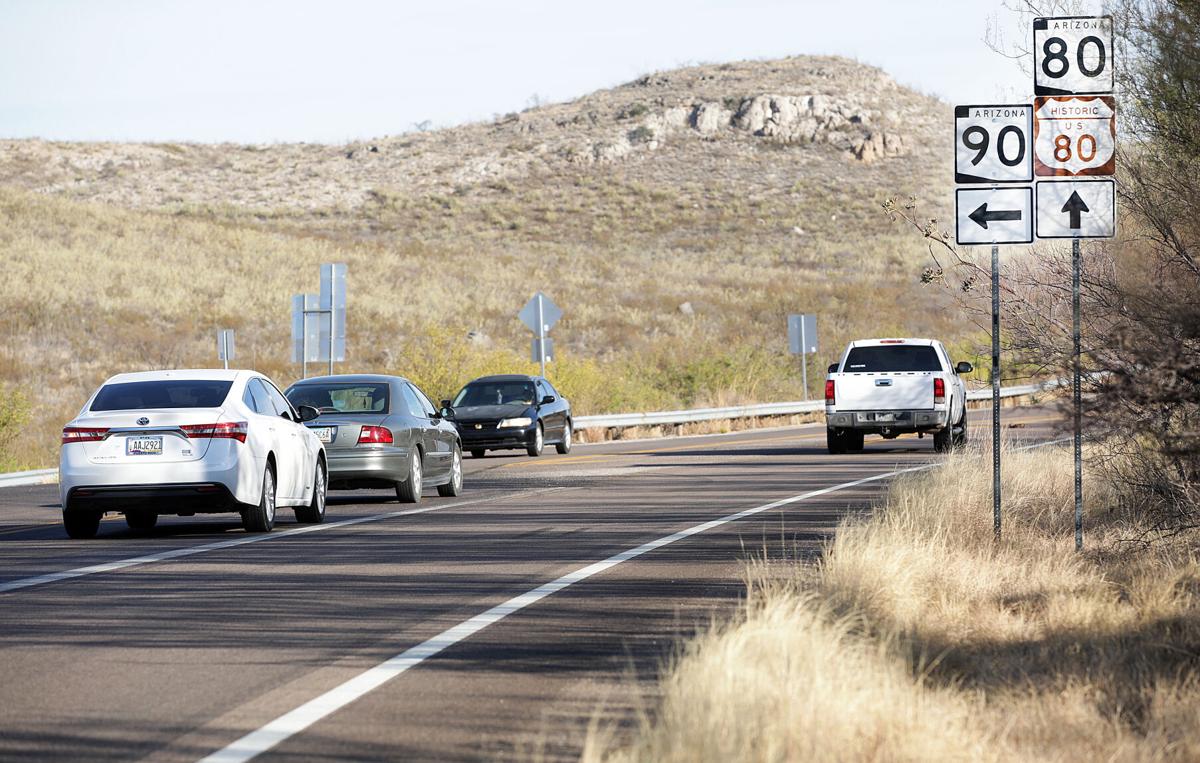 The intersection of State Routes 90 and 80 is a dangerous spot where accidents have occurred. 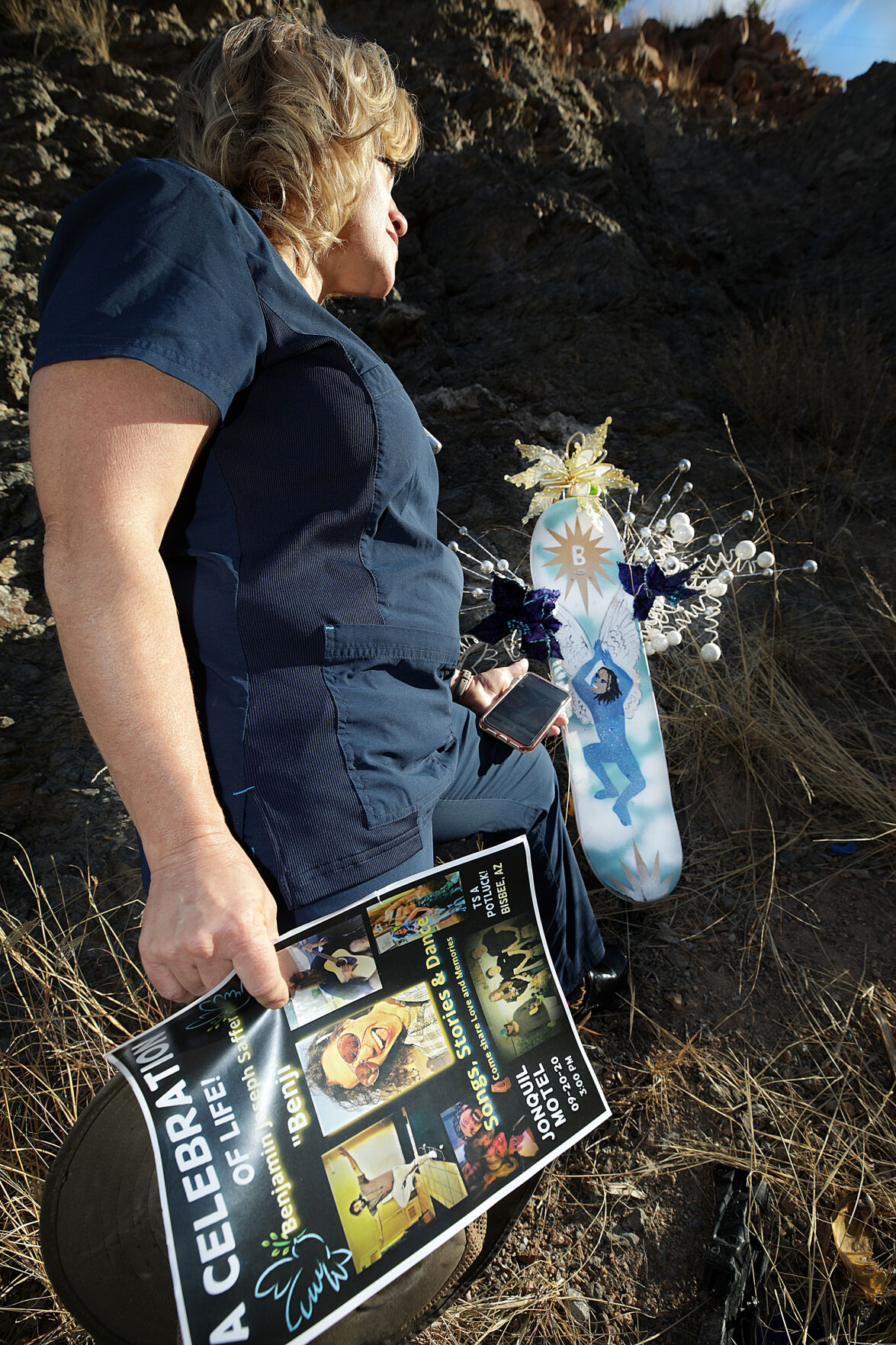 Accident victim Suzanne Walsh touches a necklace and locket containing cremains of her partner Benjamin Saffer on State Route 80 near Bisbee. Walsh and Saffer were hit head-on by a truck in August at the site.

The roadside memorial for Melody Olson still remains from the December 2016 accident on Charleston Road near Tombstone.

The intersection of State Routes 90 and 80 is a dangerous spot where accidents have occurred.

COCHISE COUNTY— Mostly rural in nature, unincorporated stretches of Cochise County are traversed through mountainous, curvy and narrow two-lane highways where putting pedal to the metal or getting distracted could end tragically.

Highway and transportation officials say the roads, where they’re located and the way they’re configured are not the problem — it’s the people who drive on them.

“Highways do not kill people,” said Bart Graves, a spokesman with the Arizona Department of Public Safety. “Driver error is a factor in the vast majority of collisions DPS investigates.”

Physical therapist Suzanne Walsh knows all too well that it wasn’t the road that killed her 37-year-old boyfriend on a recent August morning as they both headed to work.

It was another driver’s error.

It was just after 5 a.m. and the sun was not quite out over State Route 80 as Walsh and her boyfriend, Benjamin Saffer, left Bisbee and drove toward Sierra Vista to their respective jobs. Saffer was at the wheel of his Toyota Prius, Walsh next to him in the passenger seat.

Suddenly Saffer and Walsh were alarmed when they saw four headlights side-by-side on the road ahead of them. One vehicle was in the south lane. The other, a pickup, was in their lane barreling toward them.

”I thought to myself, ‘We’re gonna get hit, there’s no way out of this,’ “ Walsh said last week as she recounted the horrific crash. “I never felt once that I would die. I never got scared. I just braced for it. I said to myself, ‘Here we go, here we go. ‘ “

Seconds later after the car did what Walsh described as “cartwheels,” Walsh and Saffer were hanging upside down in the Prius, their seatbelts still strapped to their bodies.

Walsh was conscious, Saffer was not.

“My first thought was that the car could blow up,” Walsh said. “I got my seatbelt off and I took his off. I got out of the car. I pulled my boyfriend out of the car and I started giving him CPR. I went into work mode. I saw that his neck was broken.

“I was able to keep him keep alive for about 20 minutes.”

Saffer died at the scene. His Prius had been slammed into head-on by the driver of a Ford F-250 pickup, Arizona Department of Public Safety officials said. The driver, Adam Shane Brown, was heading south on 80 when he passed the vehicle in front of him in the southbound lane, in a no-pass zone, Graves said. Brown was attempting to get back into the southbound lane, but instead he rammed into Saffer and Walsh, investigators said.

Brown, 24, has been charged with second degree murder, manslaughter, reckless and negligent homicide. In court, Walsh learned that Brown, a member of the construction crew building the wall along the border with Mexico, was running late for work the day of the wreck.

At a hearing Friday before Cochise County Superior Court Judge Laura Cardinal, Brown’s case was continued after his attorney, Rodrigo Andrade, and prosecutor Jason Lindstrom talked about a possible settlement conference early next year. The case will be transferred to another assistant prosecutor since Lindstrom, elected judge of Cochise County Superior Court Division V, will be on the bench by the first Monday in January.

In June and July, State Route 80 was the scene of two more accidents inside the Mule Pass Tunnel, Arizona Department of Public Safety officials said.

In June, a cyclist heading into the tunnel from Bisbee was struck by the driver of a sport utility vehicle. The latter did not see the cyclist who was dressed in dark clothing and had no lights on his bike, Graves said.

In July, the driver of a Volvo who was heading south inside the tunnel veered into the northbound lane and slammed head-on into the teenage driver of a Dodge Charger, Graves said.

The Mule Pass Tunnel can be especially tricky, said Cochise County Sheriff’s spokeswoman Carol Capas, because it consists of two northbound lanes, but only one southbound. Capas said a motorist unfamiliar with that setup who drives into the tunnel too quickly could be in for a surprise.

But as highway safety officials reiterated, it’s not the road, it’s the driver.

”Arizona’s state highways are designed and built to meet exacting safety standards,” said the public affairs office of the Arizona Department of Transportation. “But as with any roadway, safety is dependent upon drivers making smart decisions. Speeding, impairment, distraction and not wearing seat belts are leading factors in traffic fatalities. These are preventable deaths and everyone needs to make better decisions behind the wheel.”

ADOT produces the information based on a compilation of crash reports provided by law enforcement agencies across the state. ADOT’s 2019 report shows 114 drivers out of 255,259 motorists involved in crashes had passed in a no-pass zone, like Brown.

The report also shows the number of crashes per county per year, amid a myriad of other sections. There were 1,072 crashes in Cochise County in 2019. That was a drop from both 2018 and 2017, when there were 1,253 and 1,291 crashes, respectively. In 2019 and 2018, the majority of those crashes occurred in Sierra Vista, the ADOT data shows. In 2017 however, the majority of the accidents happened in unincorporated Cochise County.

One of those fatalities — in 2019 — involved a crash at State Routes 80 and 90 that killed Jesus Campoy of Douglas.

Authorities say suspect Debra Charlotte Franco of New Mexico took a wrong turn onto State Route 80 from 90, and as she was attempting a U-turn, Campoy tried to avoid Franco’s sport utility vehicle and struck a guardrail. The impact sent Campoy across the roadway. His car was then struck by another motorist, killing Campoy instantly. The other driver was injured, police said.

Franco, 67, was charged with negligent homicide, manslaughter and reckless and aggravated assault with a deadly weapon. Her case is making its way through the courts, as is Brown’s.

Last week, on a section of State Route 92, in unincorporated Cochise County in Palominas, a 31-year-old man was killed after he drifted into the opposing lane and struck the driver of a pickup head on, said the Arizona Department of Public Safety.

Echoing other safety and transportation officials, Cochise County Sheriff Mark Dannels said he believes motorists can do their part to stay safe by planning their drive so that speed is not a factor.

The sheriff also suggested that motorists always tell someone where they’re going in case something happens and the driver is stuck in an area of the county where there’s no cell phone coverage.

“That way we can come out and get you,” Dannels said.

He said many of the highways in Cochise County could be daunting, especially to motorists who are unfamiliar with the area. Many are just two-lane thoroughfares.

“A lot of (our) roads are tricky, they’re very mountainous and curvy,” Dannels said.

Walsh is familiar with those risks and what can happen if a motorist isn’t on top of his or her game. In her interview with the Herald/Review, she said that Saffer — who she said had no traffic violations on his driving record — always warned her against speeding.

At a recent hearing where she was in court facing Brown, Walsh said she was able to address the defendant.

“In court I told him (Brown), ‘I forgive you,’ Walsh said. “We both were part of something very extreme.”