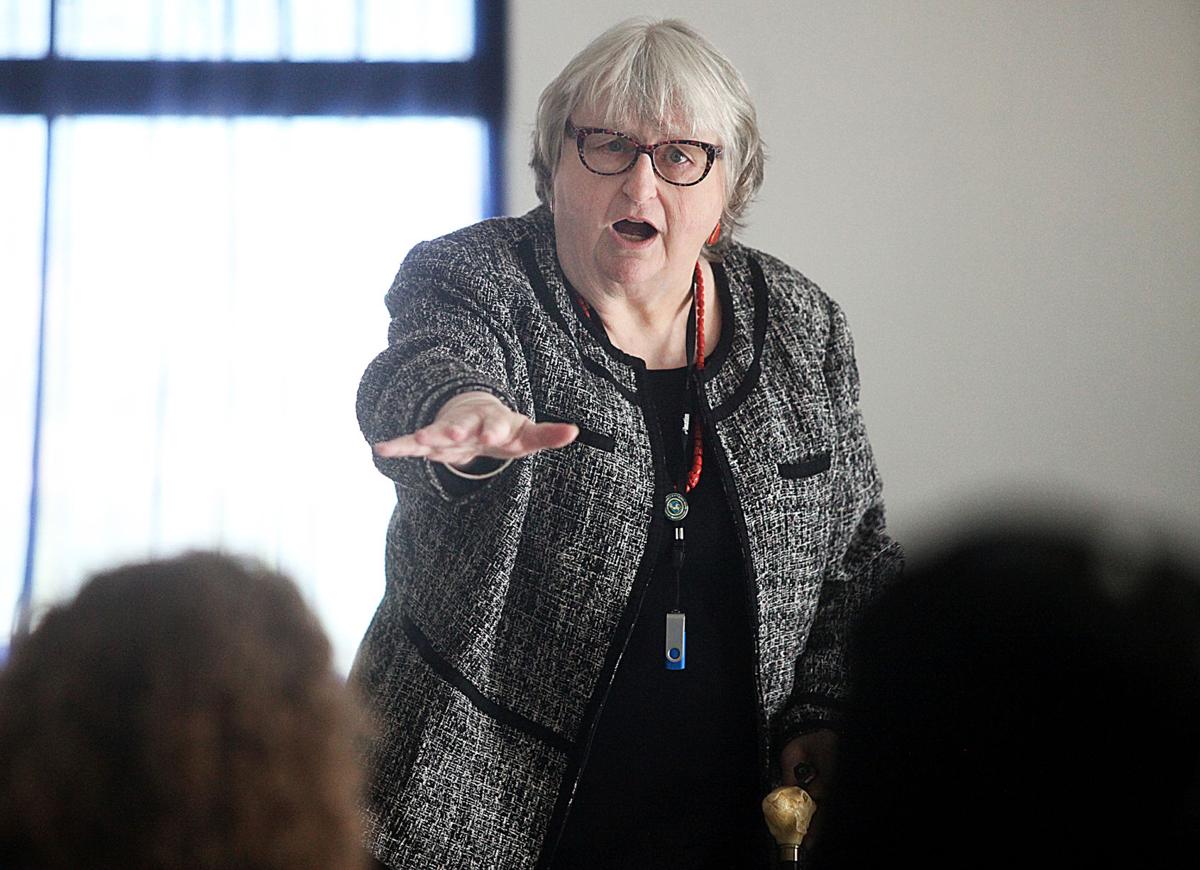 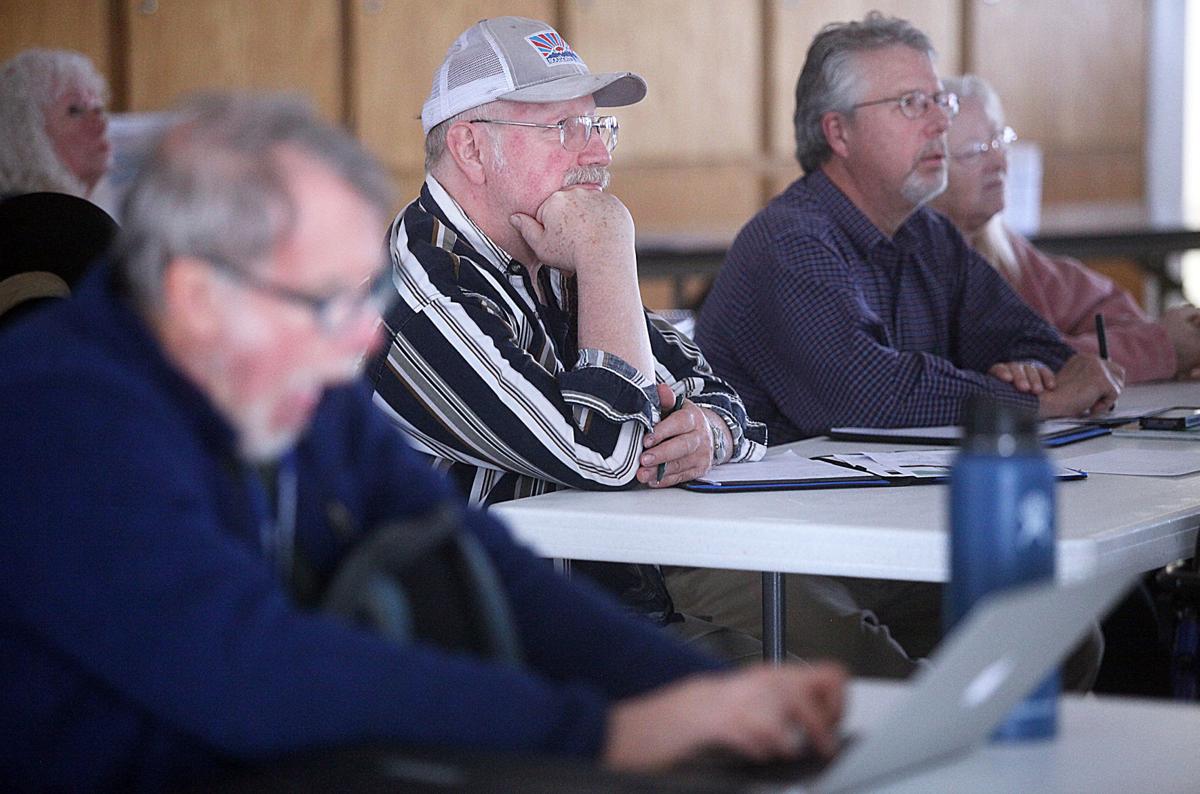 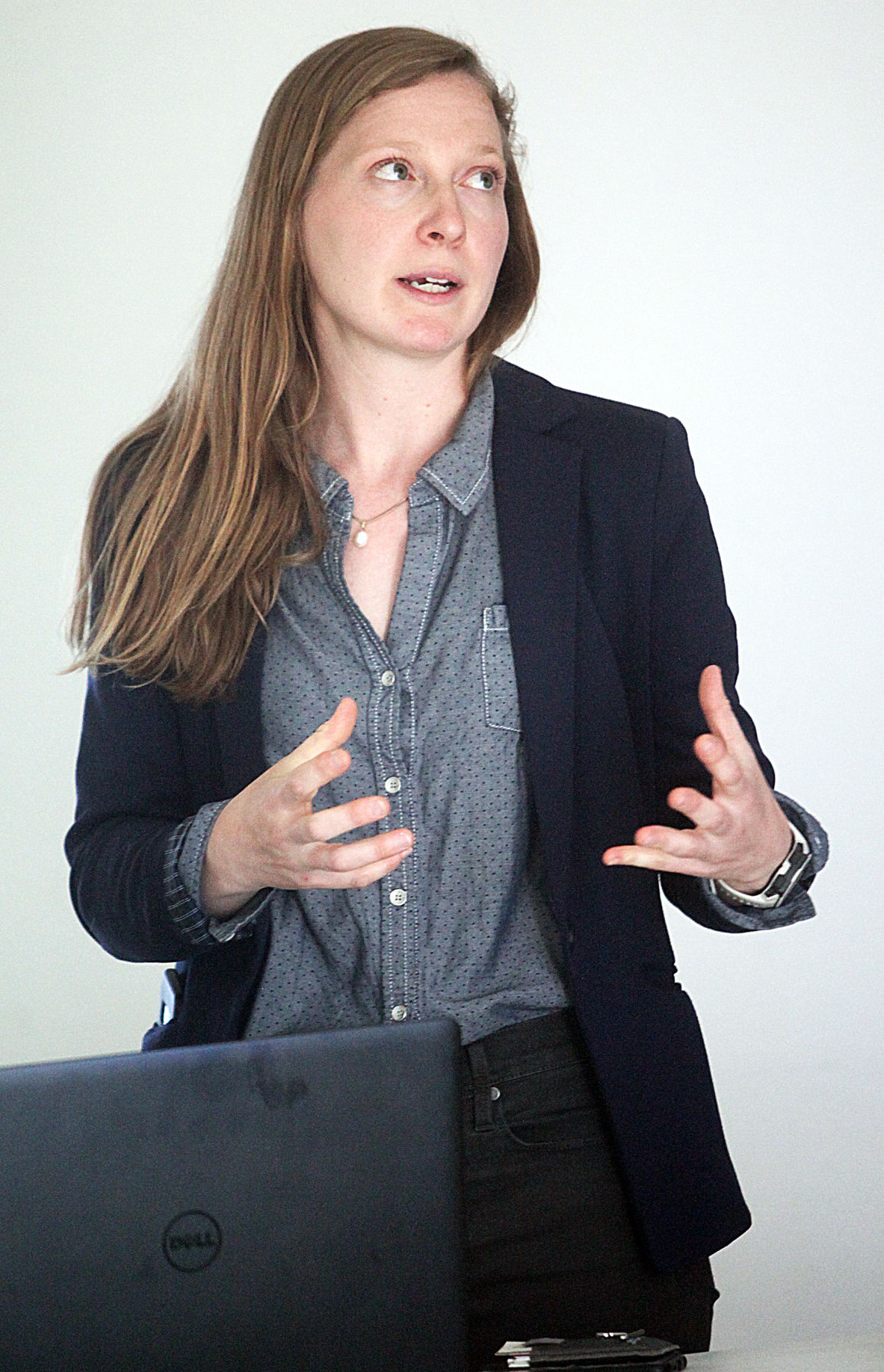 SUNSITES — The second Willcox Water Project workshop got underway Wednesday with an informative presentation in a way that captured the attention of the dozens of people who came to hear about the Willcox aquifer and how their wells might be affected by drawdown.

University of Arizona retired hydrologist and biologist Kristine Uhlman provided an entertaining history lesson on how aquifers in general, and the Willcox aquifer in particular, formed over eons from the movement of the earth’s crust along the San Andres fault and Rio Grande rift which stretched the land between them.

Rainwater and snowmelt eroding the mountains and hills and fracturing rock from weather changes carried with it sediments of different sizes from the miniscule to boulders. Water collects at the deepest point and in different quantities within the different sediment layers.

It is a closed basin with rainwater and snowmelt from the higher elevation mountains on the east side flowing down into the lowest point, the Willcox Playa, an ancient dried 50-square mile salt lake.

Water quality and quantity depends on where a well is drilled and how deep it goes, she explained.

One of the reasons the Willcox area, and the basin area as a whole, is a popular spot sought by agriculture is the deep, pure water found thousands of feet below ground, she added.

The Arizona Department of Environmental Quality (ADEQ) monitored groundwater quality at 58 sites and the finding were not significant.

However, Uhlman noted, there are various sites around the basin which may harbor some unpredictable, unsafe contaminants. Those can include naturally occurring fluoride, arsenic, radon and uranium as well as nitrates, sulfates or salts. Volatile organic compounds (VOCs) can sometimes be found if oil, gas or cleaning solvents, like degreasers, are spilled or leaked and make their ways to the aquifer.

Nitrates and salts can end up in well water from irrigation fields due to evaporation, which allow it to collect in the soil, she said.

Septic systems and above ground flow from rain events can sometimes add bacteria to the well screen and pipes creating a health hazard.

“That’s why you should have your well water tested once a year… on your birthday… so you don’t forget when you last did it,” Uhlman joked. “And call a pump installer to do it.”

“Long-term ‘draw down’ ranges from a minimum of 354 feet north of the Willcox Playa to as much as 917 feet near Kansas Settlement,” according to ADWR, she noted.

The decline in water level has been ongoing since the 1940s and an ADWR estimate in 2014 put the annual drawdown at 182,200 acre-feet annually.

Domestic and municipal use was estimated at 2,300 acre-feet a year and the Apache Power Plant at 5,500 acre-feet a year. An acre-foot equals a one-foot depth of water over an area the size of a football field, or 325,851 gallons.

There is some recharge effect at the base of the mountain ranges and from some of the washes in the valley, according to the ADWR.

It is not just the decline in water that is worrisome. As the water level declines, the ground begins to subside creating fissures which in some areas around Willcox and Dragoon is causing Cochise County road and drainage problems. ADWR found some areas in the basin had subsided as much as six feet.

UA Water Resources Research Center research analyst Ashley Hullinger pointed out the Kansas Settlement area is most affected by the drawdown of the aquifer.

“Once the water is gone, there’s no way to fill it back up,” Hullinger said.

She also invited people to attend a water conference sponsored by the center called “Water at the Crossroads: The Next 40 Years” which will be held at UA Black Canyon Conference Center on March 27. For more information, visit the website: https://wrrc.arizona.edu/.

All presentations are available online, as well as more information on the Willcox Water Project at: https://willcoxwaterproject.org/.

She was the first female graduate in hydrology at the University of Arizona and is a nationally recognized hydrogeologist specializing in aquifer characterization, environmental site remediation, water resource management and protection, compliance, and groundwater modeling. She has over 40 years of experience in the management of multi-disciplinary, environmental projects involving site characterization, geologic data acquisition and analysis, GIS applications, mine site restoration, aquifer vulnerability assessment, and CERCLA / RCRA compliance. The author of several publications, she was an elected Member of the Board of Directors of the Scientists and Engineers Division of the National Groundwater Association (NGWA) and is currently Executive Editor for the journal Groundwater. Additionally, Ms. Uhlman has developed innovative field investigatory techniques, generated litigation quality field protocol and standard operating procedures, and provided expert testimony on contaminant hydrogeologic issues. With an academic background in classical well hydraulics and hydrology from the University of Arizona, Ms. Uhlman has extensive experience in groundwater resource protection. Her aquifer characterization experience includes subsurface exploration in many geologic settings, including the arid regions of the Middle East and the Southwestern United States, glacial outwash aquifers, fractured bedrock, karst, and coastal areas susceptible to salt-water intrusion.

Major findings of the modelling include:

Evidence of the amount of groundwater removed from storage between 1940 and 2015 ranged from 4.9 million to 6.2 million acre-feet (an acre-foot equals 325,851 gallons of water, or the amount of water needed to cover an acre of land a foot deep).

Projecting forward to simulate a period of time between 1940 and 2115, the modelling concluded a net “change in storage” – meaning, in this case, a reduction in storage – ranging from 19.8 million acre-feet to 24 million acre-feet.

Both data and modelling indicate that significant declines in regional groundwater levels continue to occur.

Based on the Willcox Model results, pre-development estimates of groundwater in storage circa 1940 ranged from 80 to 97 million acre-feet.

However, it must be noted that a significant portion of the remaining groundwater in storage is found at considerable depth and may not be practical to remove.