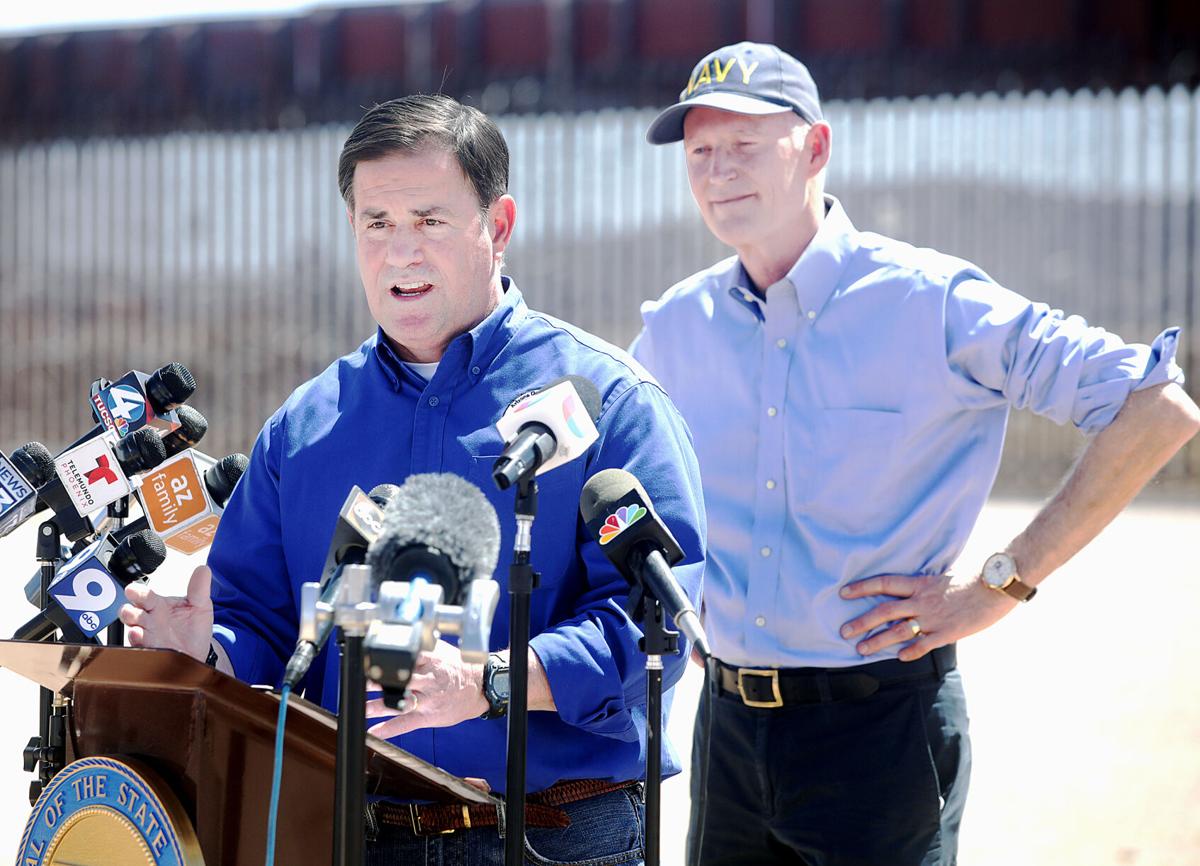 Arizona Gov. Doug Ducey addresses media attendees Friday at the border in Douglas. Sen. Rick Scott, R-Fla., who took a tour with Ducey and others, stands behind him. 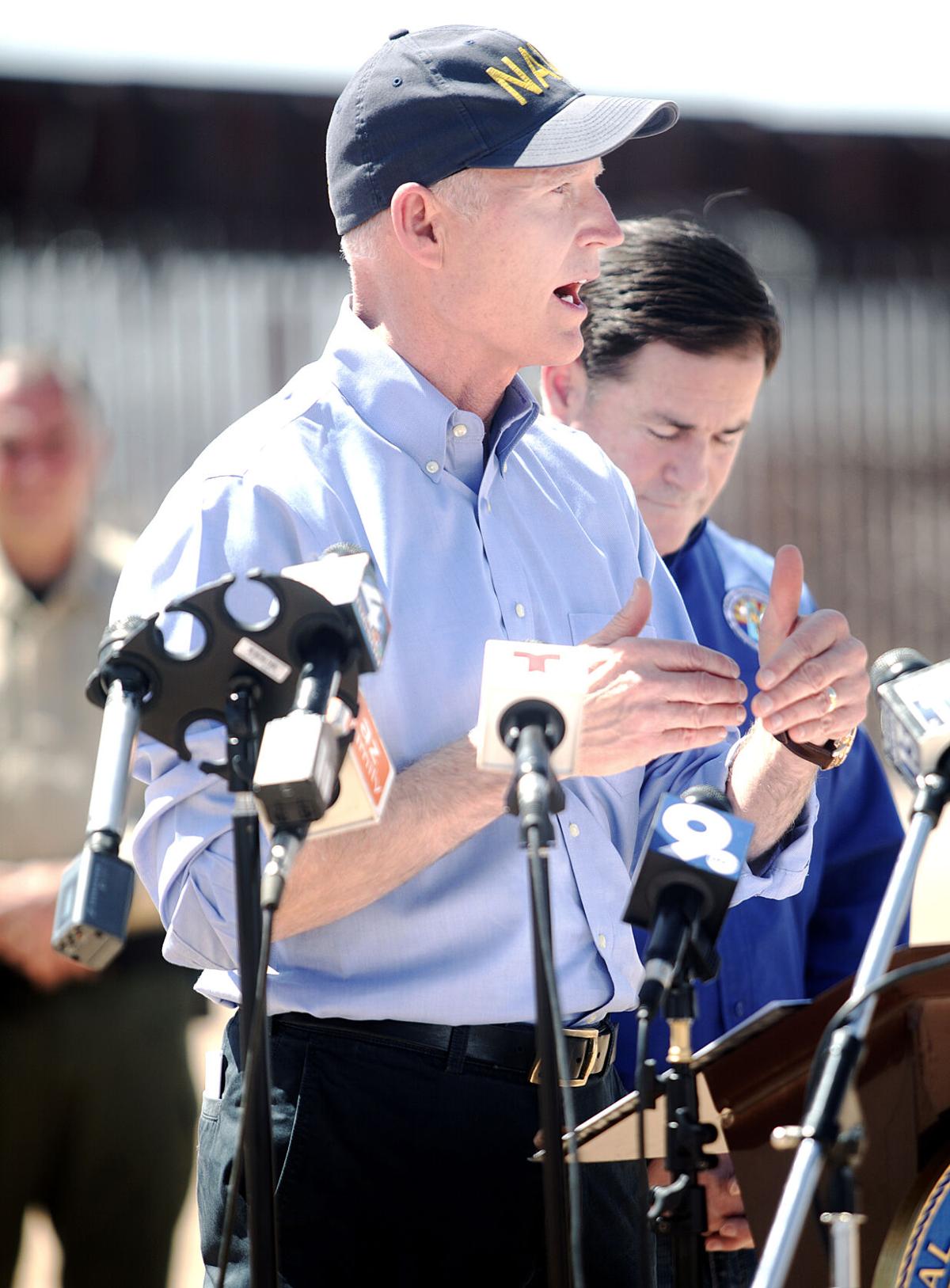 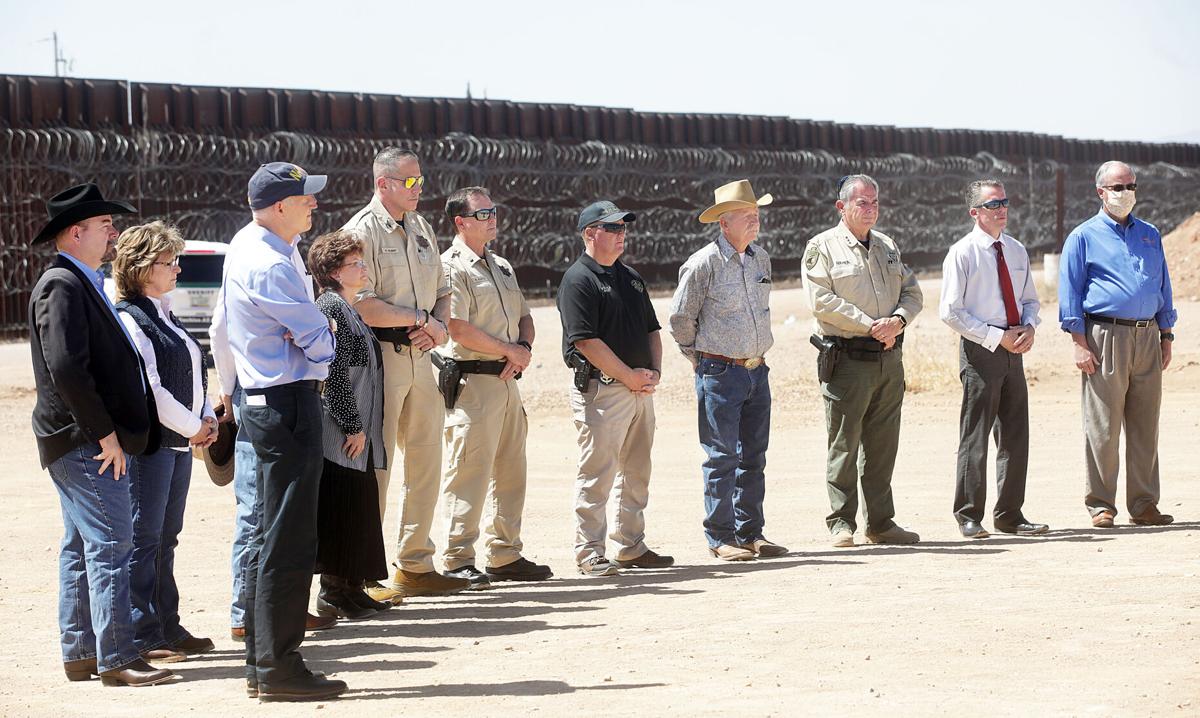 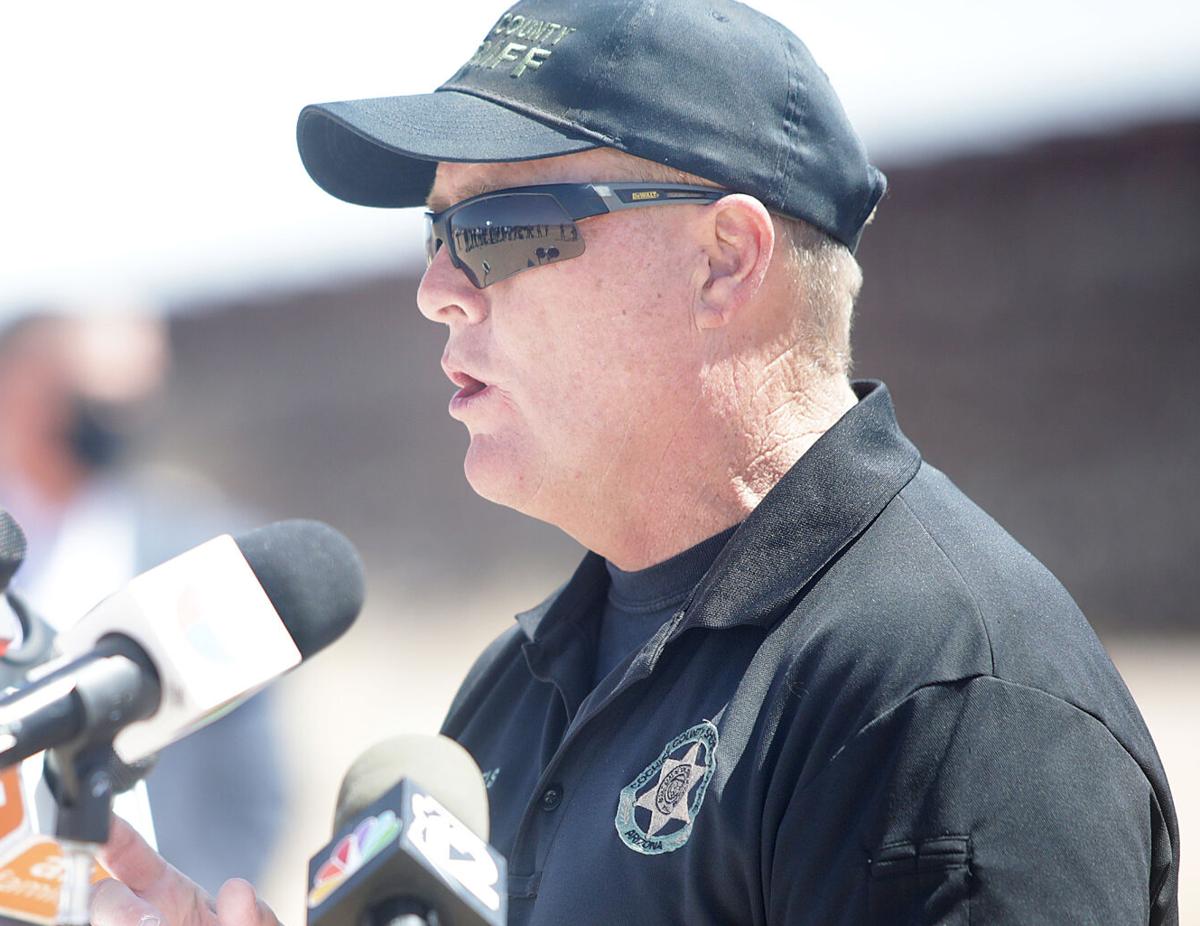 Cochise County Sheriff Mark Dannels talks about the influx of illegal entries into the U.S. by undocumented migrants.

Arizona Gov. Doug Ducey addresses media attendees Friday at the border in Douglas. Sen. Rick Scott, R-Fla., who took a tour with Ducey and others, stands behind him.

Cochise County Sheriff Mark Dannels talks about the influx of illegal entries into the U.S. by undocumented migrants.

DOUGLAS — With Mexico and the border wall as his backdrop, Gov. Doug. Ducey on Friday called out the Biden administration as being out of touch with the reality of undocumented migrants flowing into the United States, saying the situation on the border is indeed “a crisis.”

Flanked by local elected officials, law enforcement, ranchers and U.S. Sen. Rick Scott, R-Fla., who sits on the Homeland Security Committee, Ducey decried the situation on the Southwest border calling it the worst he has seen since he’s been in office.

The governor and Scott, accompanied by a handful of other officials, toured the border Friday morning aboard a Blackhawk helicopter that departed from the Douglas Municipal Airport. The end of Runway 21 at the airport is only 800 feet from the Mexican border.

Federal officials have said over the last few weeks that since April 2020, the numbers of migrants that have been crossing illegally through the Southwest border of the United States have shot up significantly.

The number of unaccompanied children and families seeking asylum by turning themselves in to border officials to be processed has also risen significantly.

According to statistics released last week by U.S. Customs and Border Protection, the increases were even more staggering between January and February of this year.

But Ducey and others on Friday called it something different.

“I’m gonna call this situation what it is — a crisis,” Ducey said Friday after the helicopter tour. “This is a man-made crisis caused by elites in Washington, D.C., who are totally divorced from the reality on the ground.”

Ducey was especially harsh on Mayorkas, whom the governor said has been missing from the border.

“It’s clear that this administration has been anti-wall and AWOL,” Ducey said. “Where has the secretary been? This is where the action is, not in Washington, D.C. We need more commitment from Washington to address these needs.”

The governor said he sent a letter to Mayorkas last month underscoring his concern with the Biden administration repealing the Migrant Protection Protocols.

The MPP program instituted under former President Donald Trump had those seeking asylum in the U.S. waiting in Mexico to be processed.

“Law enforcement officials and leaders in border communities are concerned that repealing these protocols have directly resulted in a significant influx of unvetted individuals from Central America into the United States,” Ducey said.

Cochise County Sheriff Mark Dannels, who was part of the group of law enforcement officials at Friday’s event, has also repeatedly called the situation on the border, “a crisis.”

A network of over 700 cameras, placed along the border by the Sheriff’s Office in Cochise and other areas, have captured images of undocumented migrants slipping through, he said. The sheriff said the numbers since last March had jumped from about 200 to 300 migrants attempting to sneak in monthly to about 2,000 a month.

State Rep. Gail Griffin (R-Hereford) said she has had undocumented migrants attempting to enter the country illegally on her own property numerous times. She said Friday that she has been receiving calls from constituents who have experienced the same thing and are afraid.

Griffin said the main thing that can be done at her level of government to tackle the situation is to ask Congress for help.

Officials in border communities fear they will see an influx of asylum seekers released from custody and overwhelm local nonprofits, as happened during the 2019 immigration spike. The latest round of federal COVID-19 relief funding included $110 million for governments and nonprofits providing humanitarian assistance at the southern border.

That help can’t come soon enough for Douglas Mayor Donald Huish, who said Friday that there has been an “increase in activity” regarding undocumented migrants trying to pass undetected near the city.

“We’re seeing it closer to town and that’s really got me worried,” Huish told the Herald/Review. “(Recently we had) adult males about a mile east of the city.”

Cochise County rancher John Ladd, who also attended the governor’s visit Wednesday, is no stranger to seeing undocumented migrants traipsing through his ranch as they try to make it to State Road 92 where a coyote — human smuggler — is often waiting in a vehicle.

Ladd said that Thursday a horse-mounted unit from the Border Patrol’s Brian A. Terry Station near Bisbee caught 30 undocumented adults on his property “in broad daylight.”

Ducey said his administration would like to “partner with the federal government to improve our immigration system.”

“But so far I’m not encouraged,” Ducey said. “We know it’s going to get dramatically worse before it gets better.

The Associated Press contributed to this report.