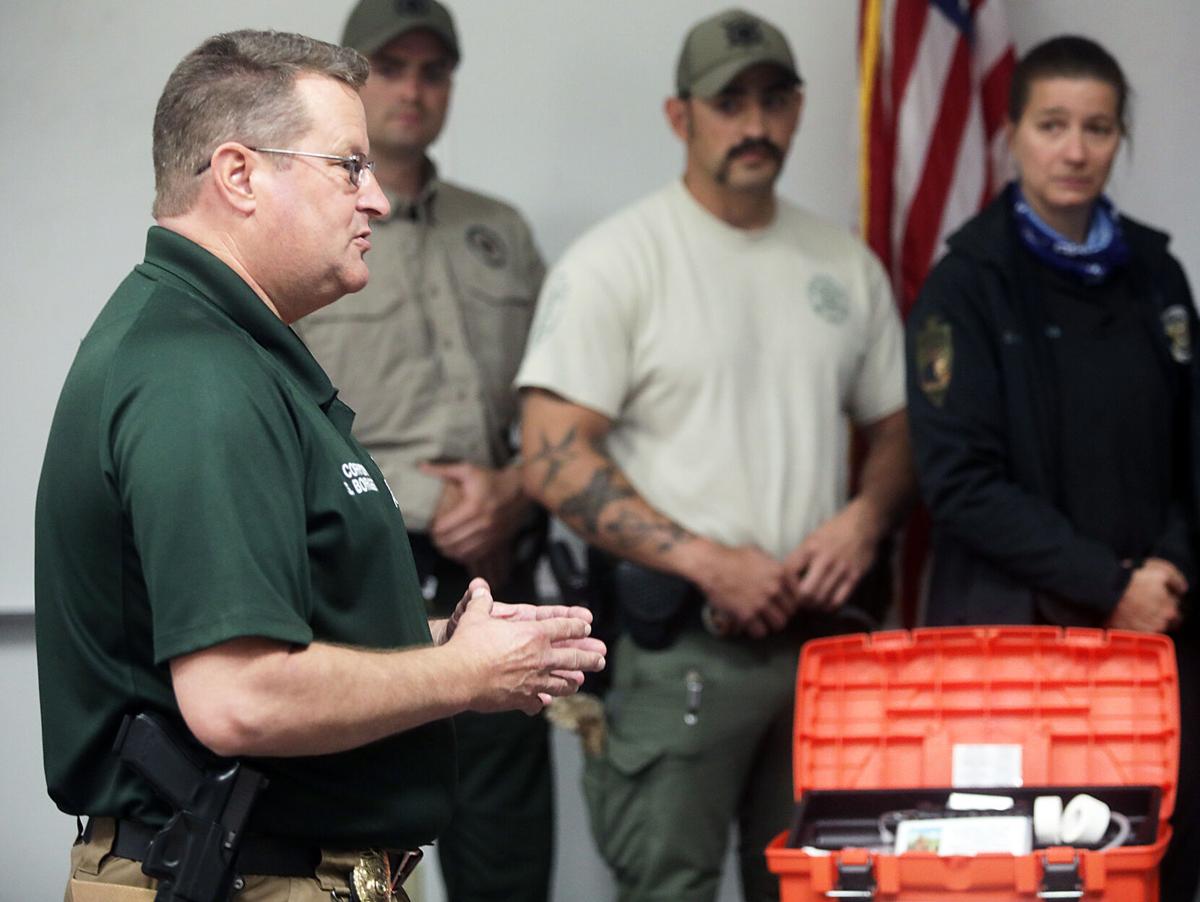 Sierra Vista Police Department spokesman Scott Borgstadt discusses the $400 kits that will help officers tend to their K-9 partners if the animal is injured on duty. 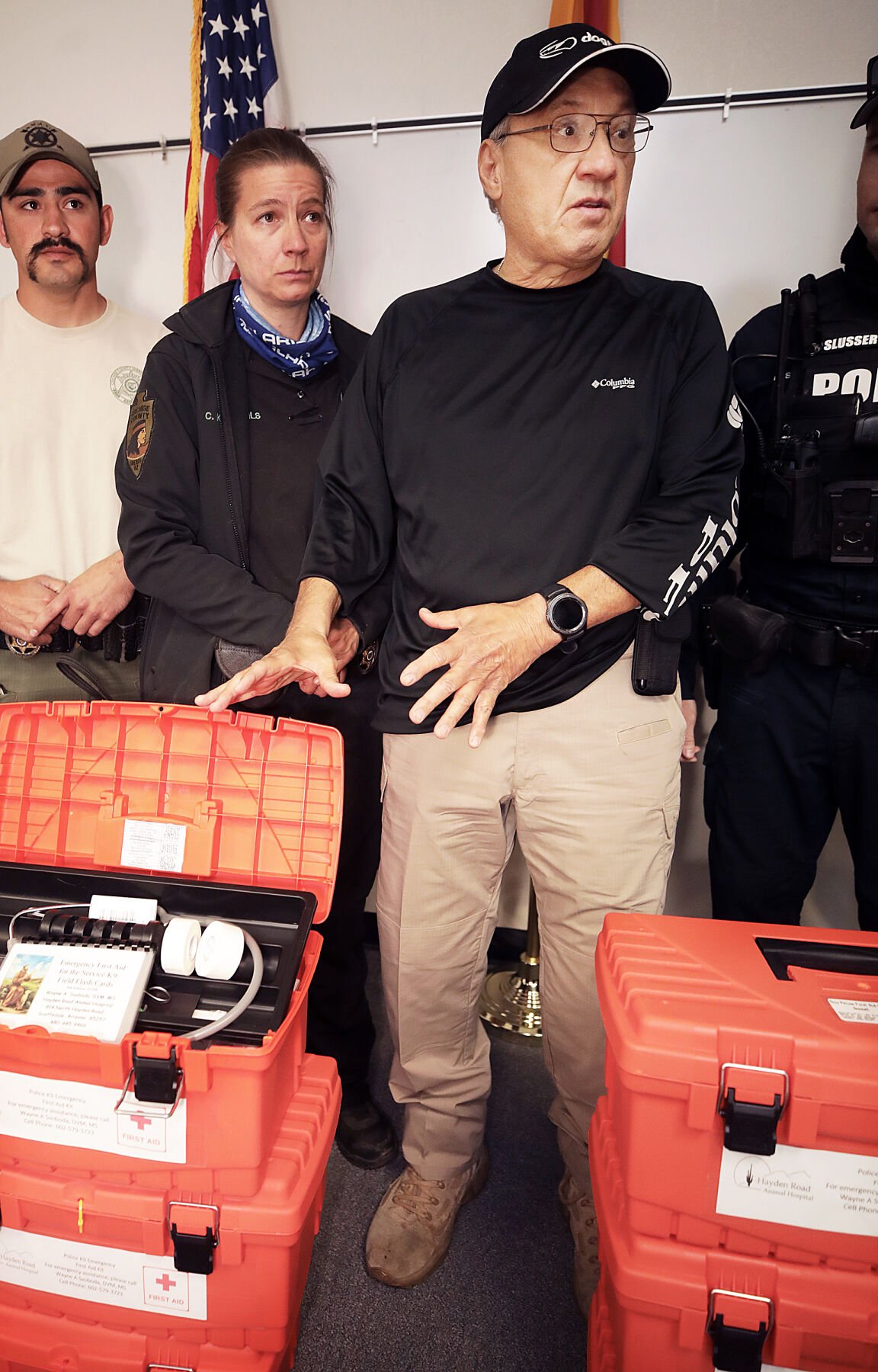 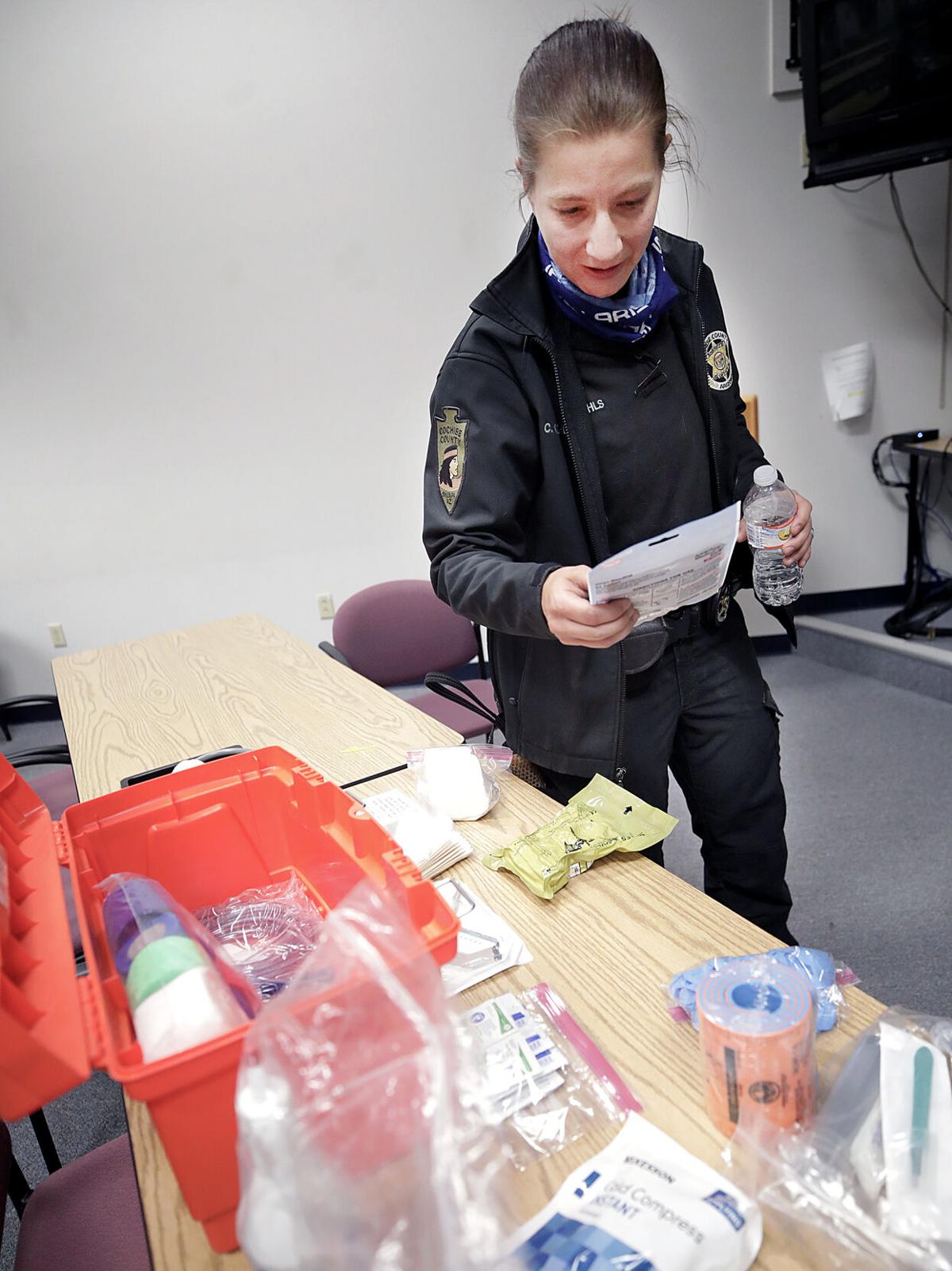 Sierra Vista Police Department spokesman Scott Borgstadt discusses the $400 kits that will help officers tend to their K-9 partners if the animal is injured on duty.

SIERRA VISTA — Emergency kits geared specifically toward helping save a canine cop’s life during an emergency while on duty were presented to Sierra Vista Police and the Cochise County Sheriff’s Office on Wednesday.

Six kits, costing $400 apiece, were donated to both agencies for their four-legged law enforcement officers. Both departments have three K-9 officers each.

Before these kits were donated Wednesday by AZ K9 Heroes of Tucson, officers had nothing in their vehicles to help their K-9 partners in the face of an injury or other emergency, said John Sainz, a member of AZ K9 Heroes.

“Before the kits were available officers had to rely on their own wherewithal. At some point they had to evacuate the scene and get their dog to a medical facility. An immediate medical response can save the life of the K-9 partner.”

Sainz mentioned that officers have had to use anything they could find in their patrol cars to help an injured K9 partner.

The kits contain all manner of first aid for a K-9 officer — or a civilian for that matter, according to Sierra Vista Police spokesman Cpl. Scott Borgstadt — including explanations on how to treat an animal for certain conditions.

An AZ K9 Heroes fundraiser was held at Walmart in Sierra Vista and about $1,100 was raised though donations from the public. That money and other resources helped provide the six emergency kits.

For Cochise County Sheriff’s Detention Officer C. Kohls, the first aid kit is a godsend. Kohl’s partner is Argus, a 5-year-old Dutch shepherd trained as a single purpose narcotics dog. Argus works the jails in Bisbee, Sierra Vista and Willcox. Kohls said her partner recently suffered a scrape on his paw during a “’play break” while on duty, but she was able to get him some relief quickly. It probably would have been more challenging if they had been traveling between facilities and without an emergency kit.

“’It could be something like stepping into a shard of glass outside, to heat exhaustion,” Kohls said. “It’s (the emergency kits) really important especially for the people who work the road to have something that they can give immediate first aid with, so they can buy those extra minutes to get them to a veterinarian.”

Ethan Slusser, a Sierra Vista police officer just chosen to work in the K-9 unit, said he, too, welcomes any additional resource that would help his future four-legged partner if an injury occurs in the line of duty.

According to the Officer Down Memorial website, 28 K-9 officers died in the line of duty in the last year. Many were killed by gunfire, others died in falls and other job-related accidents and at least one died of heat exhaustion.

Borgstadt pointed out that K-9 officers are not a tool for police, they are part of the law enforcement family.

“It’s very important to have something like this so if something does happen just like a human being, the quicker you can get emergency treatment to them, the better chance you have to save that officer’s life.”

Borgstad thanked the community for donating enough funds to help toward the purchase of the medical kits.

“This is one of the things that communities can buy with their donations and be part of the solution in supporting their local law enforcement,” Sainz said.