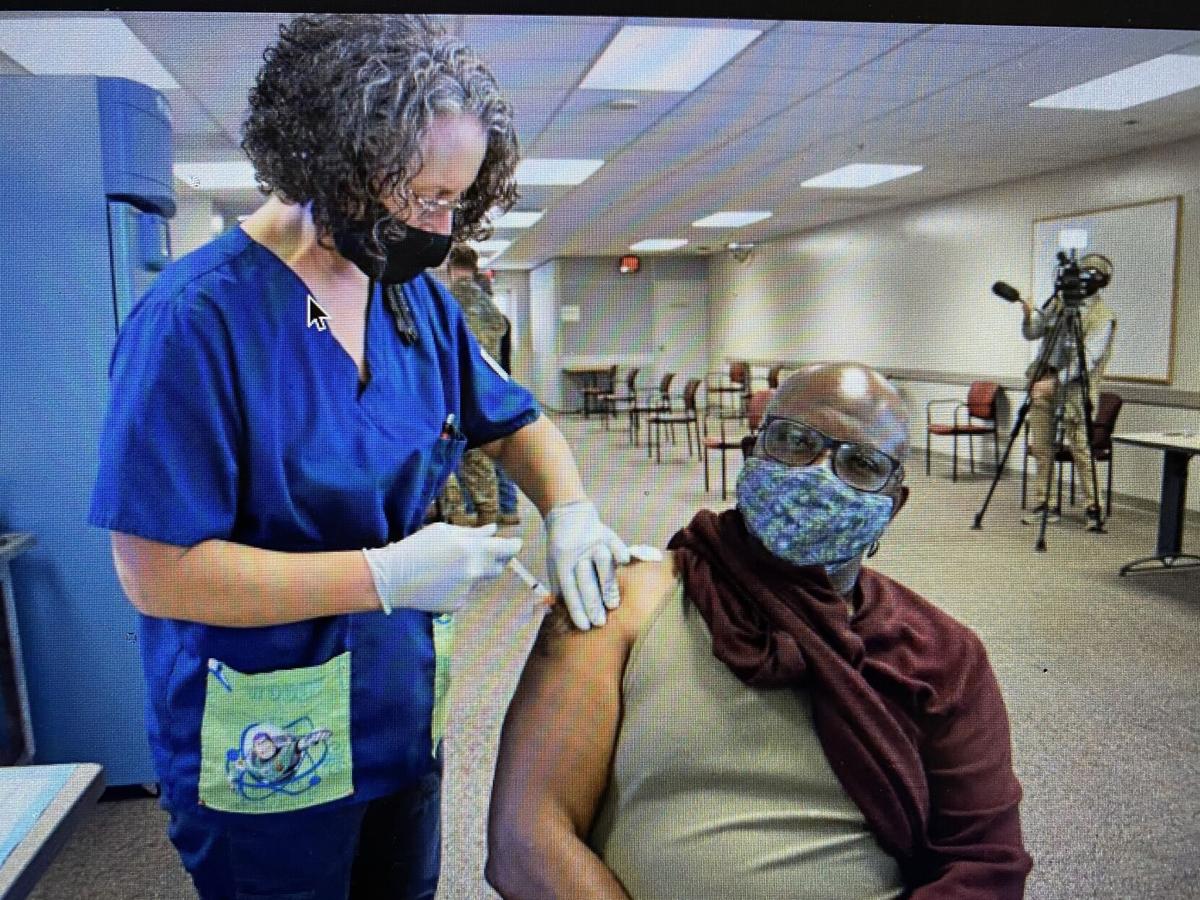 Aaron Tatum, a long-time civilian employee at Raymond W. Bliss Army Health Center, was the first in line to receive the Moderna COVID-19 vaccine at the facility on Fort Huachuca. 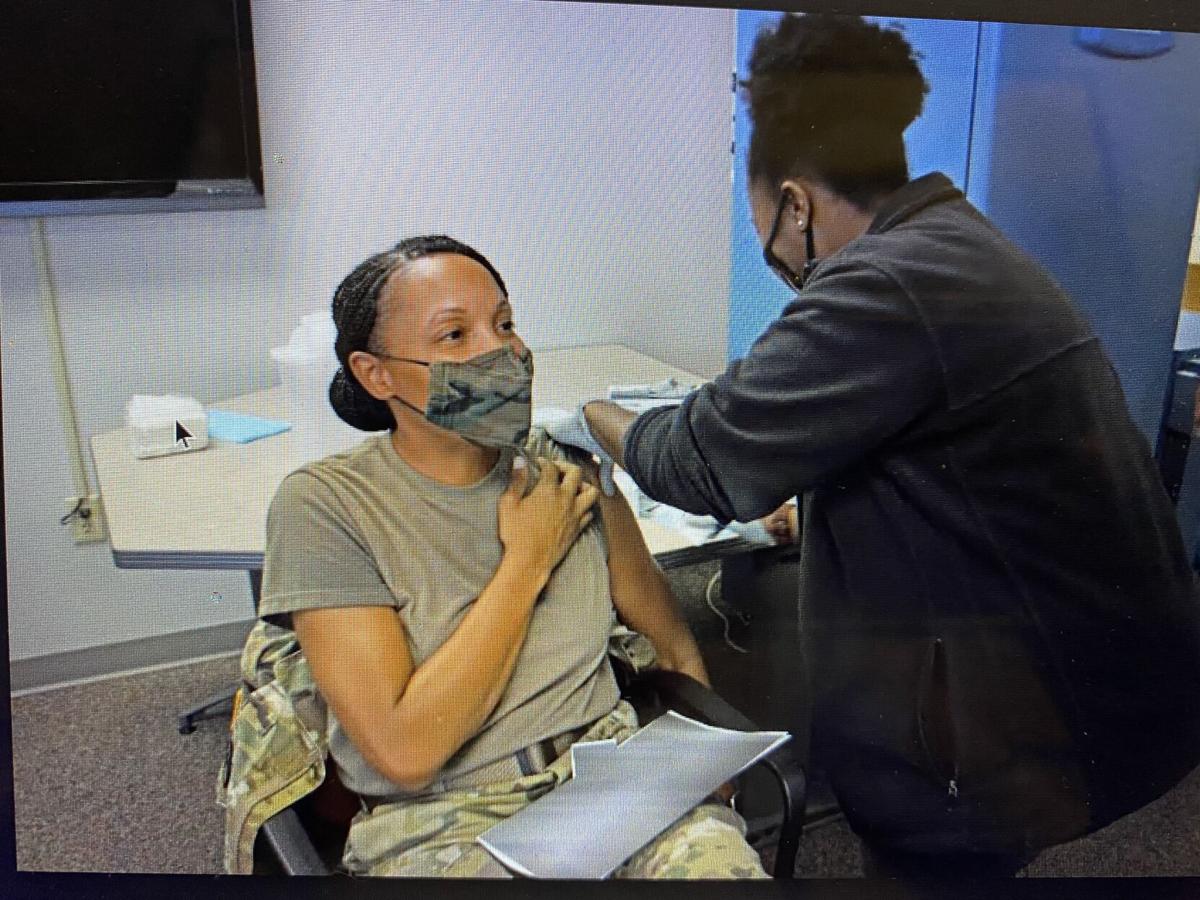 Aaron Tatum, a long-time civilian employee at Raymond W. Bliss Army Health Center, was the first in line to receive the Moderna COVID-19 vaccine at the facility on Fort Huachuca.

FORT HUACHUCA — In just three days the first phase of all eligible personnel at Fort Huachuca who wanted to receive the Moderna vaccine got their shot in the arm, officials said.

That included service members and civilians, Gray said. The Army cannot reveal how many individuals were inoculated, but the people who fell under Phase 1 at the installation included healthcare providers, healthcare support workers and emergency and safety personnel.

Of course, Brig. Gen. Tony Hale, the commander of Fort Huachuca, received his shot on Tuesday as did other top brass.

Getting the vaccine was not mandatory at the installation, but both Gray — who is also a nurse practitioner — and Hale are concerned with the “declination rate” on post, which according to Hale was about 50 percent.

Gray and Hale said many of those afraid of getting the vaccine are younger service members who believe it was developed too soon. Hale and Gray hope to spread the word that the Moderna vaccine was not developed overnight and is safe.

“I was fortunate enough to talk to the younger soldiers and a lot of them don’t trust the vaccine,” Gray said. “What I tell my people is, I lead from the front. I was one of the first to get the vaccine. I would never ask them to do something I wouldn’t do myself.”

Along those lines, Fort Huachuca’s Facebook page has a handful of videos with testimonials from various top soldiers at the installation about getting the vaccine. Hale’s video shows him getting inoculated while he’s chatting with the nurse. All of a sudden the nurse says, “All done,” much to the general’s surprise.

The general, like others who have been inoculated, said his only side effect was a sore arm; he wants to help dispel the fears of those who are doubtful about getting inoculated.

“It’s because of a lack of awareness and a lack of accurate information,” the general said. “We’ll be putting out a big media push (on post). “

Hale said the vaccine was not developed in a rush and significant research, funding and public and private partnerships are behind it.

While the Moderna vaccine is not a licensed vaccine, it has received emergency use authorization by the U.S. Food and Drug Administration.

In a Facebook live town hall called COVID Extreme, Gray wanted to address concerns about the vaccine and its effects on people and whether it’s safe. Her guest on the first-time forum was Lt. Col. Devin Cazares, a public health nurse and the Chief of Preventive Medicine at Raymond W. Bliss.

“There are a lot of naysayers out there,” Gray told Cazares. “They’re saying, ‘I want to see what happens to you before I get it.’ “

Cazares said the FDA would not have given emergency use authorization for a vaccine that was not safe. In order for the Moderna vaccine to receive that approval by the federal government, it had to go through several trials, with the FDA being involved in each.

Cazares said the Moderna vaccine is of course a two-dose series. The shots must be taken within 28 days of each other. While the vaccine does have a 95 percent success rate, it’s not yet known how long immunity will last once an individual receives the second vaccine, Cazares said.

“There is a learning curve with this,” she said.

She said the sore arms that are being reported by those who have received the vaccine, is a good sign because it means the immune system is working in the body.

It’s not yet clear when the vaccine will be administered for the group that qualifies under Phase 2 at the installation, Gray and Hale said. But Gray said she and her staff will begin preparing next week for that second round. Phase 2 vaccines will go to people who are high-risk TRICARE beneficiaries. TRICARE is the health care program for uniformed service members, retirees and their families around the world.

By the time all three phases are said and done, said Hale, about “40,000 plus vaccines will be given out here at Fort Huachuca.”

“That includes military, their dependents, civilians and retirees who have benefits through Raymond W. Bliss,” the general said.