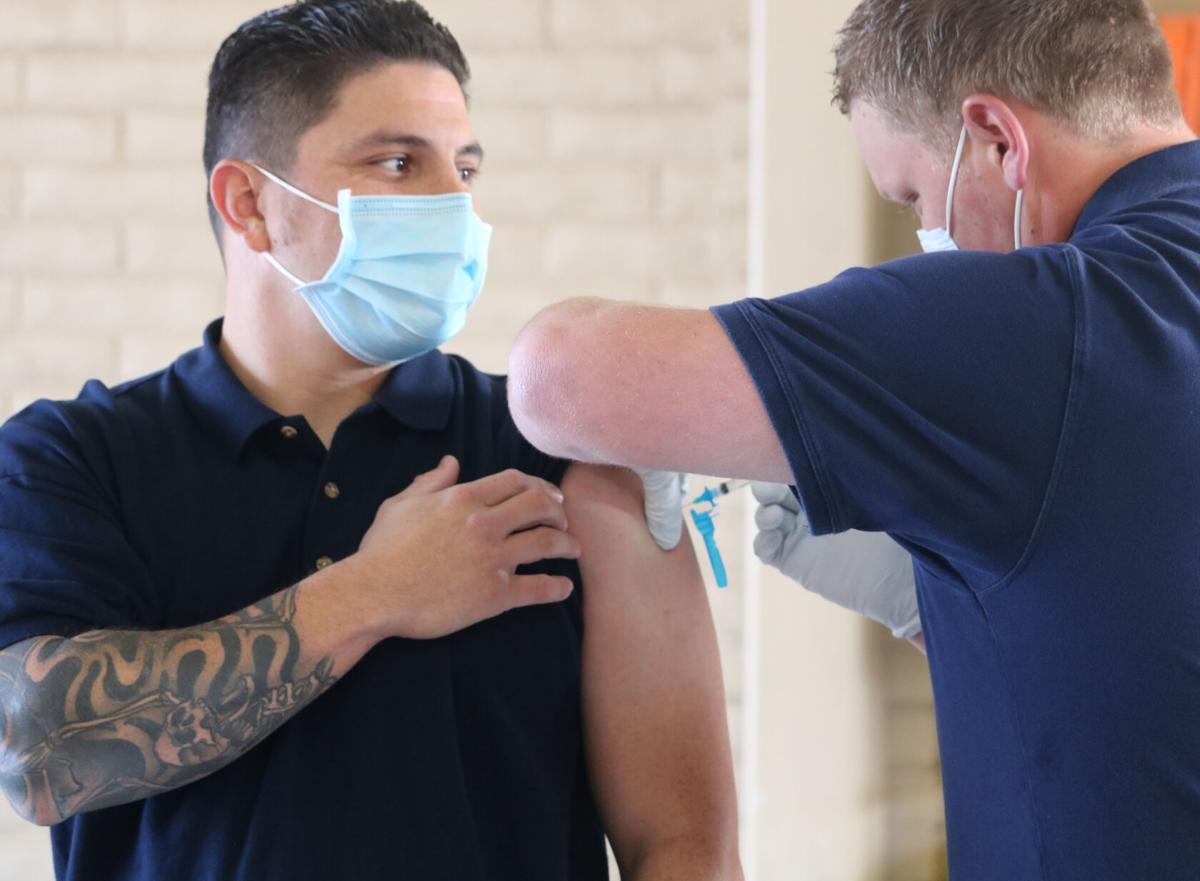 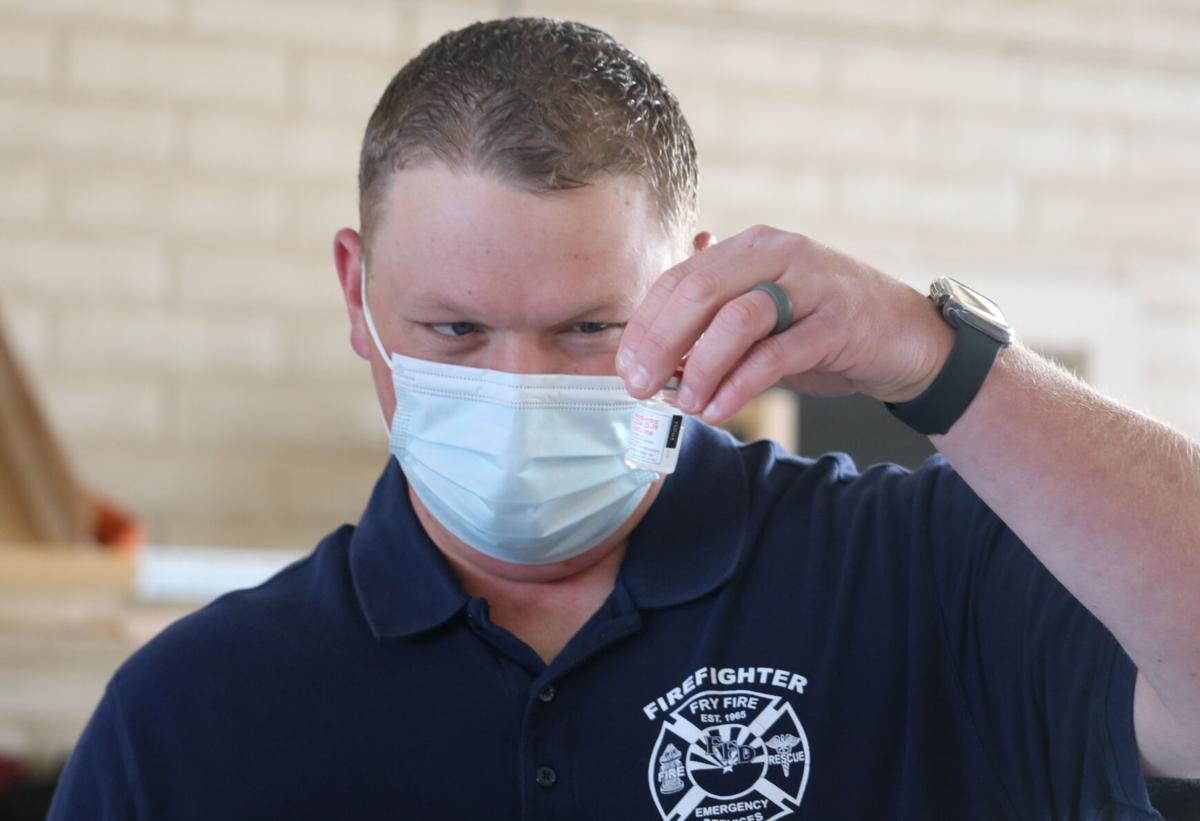 Michael Bocook examines the COVID-19 vaccine before administering it to Haros Tuesday morning.

Michael Bocook examines the COVID-19 vaccine before administering it to Haros Tuesday morning.

Haros, who also acts as the agency’s paramedic immunization coordinator, was followed by 39 other health care workers from his own department and others in Cochise County for the first round of the Moderna vaccine created to help fight off COVID-19.

Haros said he felt no negative after effects besides a little tenderness on his left arm.

“I didn’t feel a thing,” Haros said Tuesday afternoon, several hours after he received the vaccine at the Fry Fire District station on Apache Avenue.

Savage said the 40 vaccination appointments were set seven minutes apart. Health care agencies around the county received instructions prior to Tuesday so that those planning on getting the vaccine would know what to expect once they arrived at the Fry Fire District station, Savage said.

After each person was given their shot, they moved to another area where they were observed for 15 minutes to make sure there were no after effects, Savage said.

Once the first shipment of the vaccine arrived in Cochise County Monday, it was summarily distributed to the 30 entities eligible to administer the vaccine, said Alicia Thompson, director of Cochise Health and Social Services.

“The first members of our community to receive the vaccine will be health care workers who are working directly with patients who have, or may have, COVID-19,” Thompson said Monday.

The distribution of the vaccine also depends on which kind of vaccine becomes available to the county. Thompson said Cochise Health and Social Services also has the capability of obtaining the Pfizer vaccine, which must be kept under colder storage than the Moderna vaccine.

“Everything is dependent on which vaccine we’re getting, then we’ll open it up to more people,” Thompson said.

People who don’t fall under any of the occupational, health or age categories — the general population — should have access to the vaccine by summer, state officials said.

A distribution chart of the vaccine issued by the state’s Vaccine and Antiviral Prioritization Advisory Committee lists three phases for administering the Moderna vaccine. Phase One has three sections — 1A, 1B and 1C.

Once health care workers and EMS personnel are given the shot, the next group under 1A includes residents and staff of long-term care facilities such as nursing homes.

The next group, 1B, is identified as “protective service workers, or “law enforcement, firefighters and corrections officers.” It also includes teachers and others who work with children, high-risk adults in congregate settings, critical industry workers such as power and utility employees, food and agriculture personnel and health care employees not included in the 1A category.

The 1C category includes people older than 65 and anyone who has a high-risk medical condition no matter what their age.

The time frame stipulated for administering the vaccine to individuals belonging to either of the three groups is between now and spring.

Thompson said that one group will not necessarily have to wait for another group before they are able to get vaccinated.

“If we have enough vaccine doses to administer to (people) in 1B, we will,” Thompson said Monday. “They would not have to wait for all of 1A to get vaccinated. It could be that someone in 1A (group) is on vacation.”

Gilman said information about the drive-thru vaccination clinics can be obtained at www.cochise.az.gov, the County’s Facebook page and other media outlets.

Drive-thru immunizations will likely start with the 1B group, Thompson said.

Savage of the Fry Fire District said Tuesday that the vaccinations would be given again on Wednesday morning between 9 a.m. and 3 p.m. for more health care workers.

He credited Tuesday’s smoothly-run immunization event to teamwork between his department, Sierra Vista Fire and Cochise Health and Social Services.

“It was a total team effort,” Savage said.