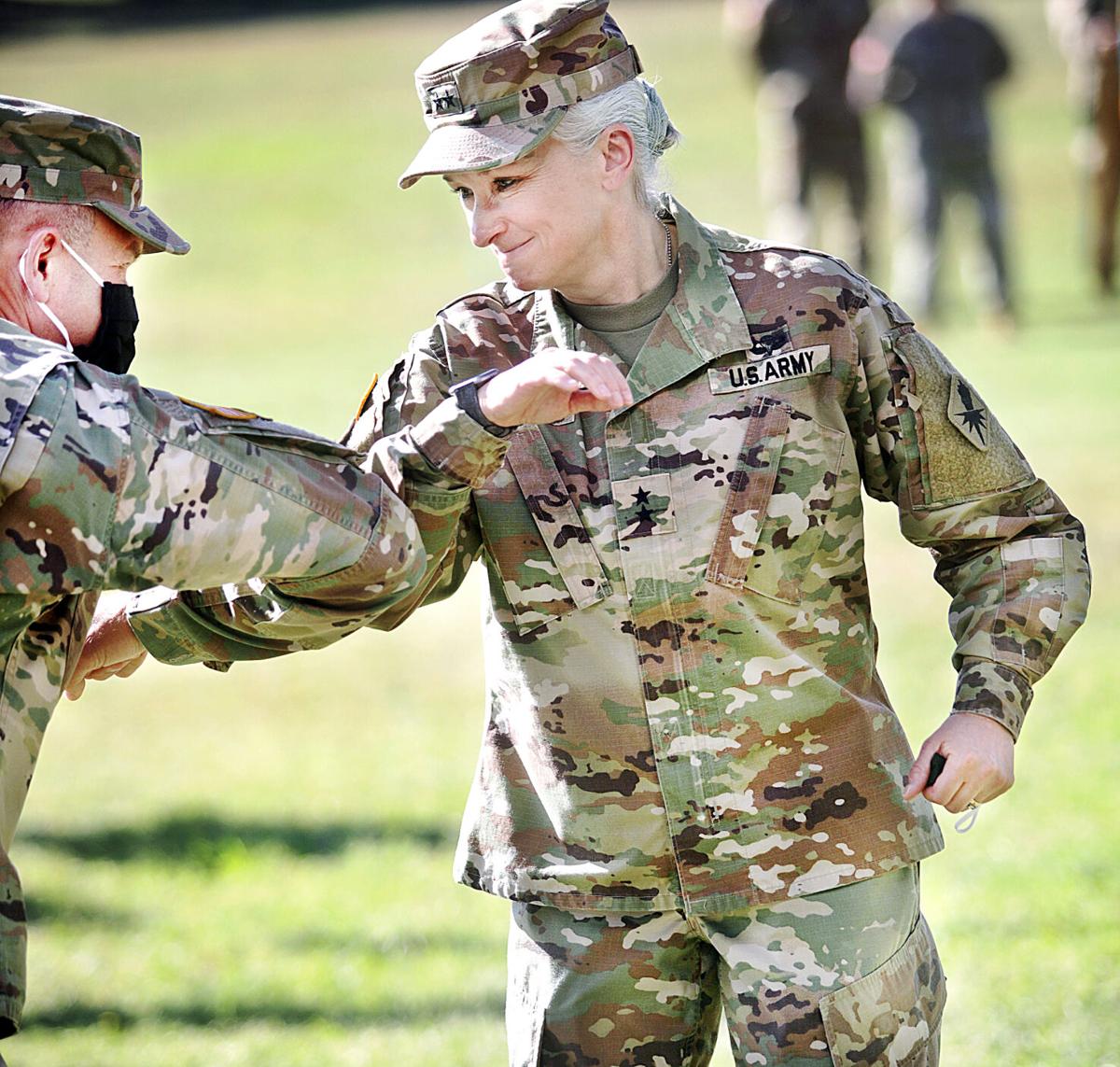 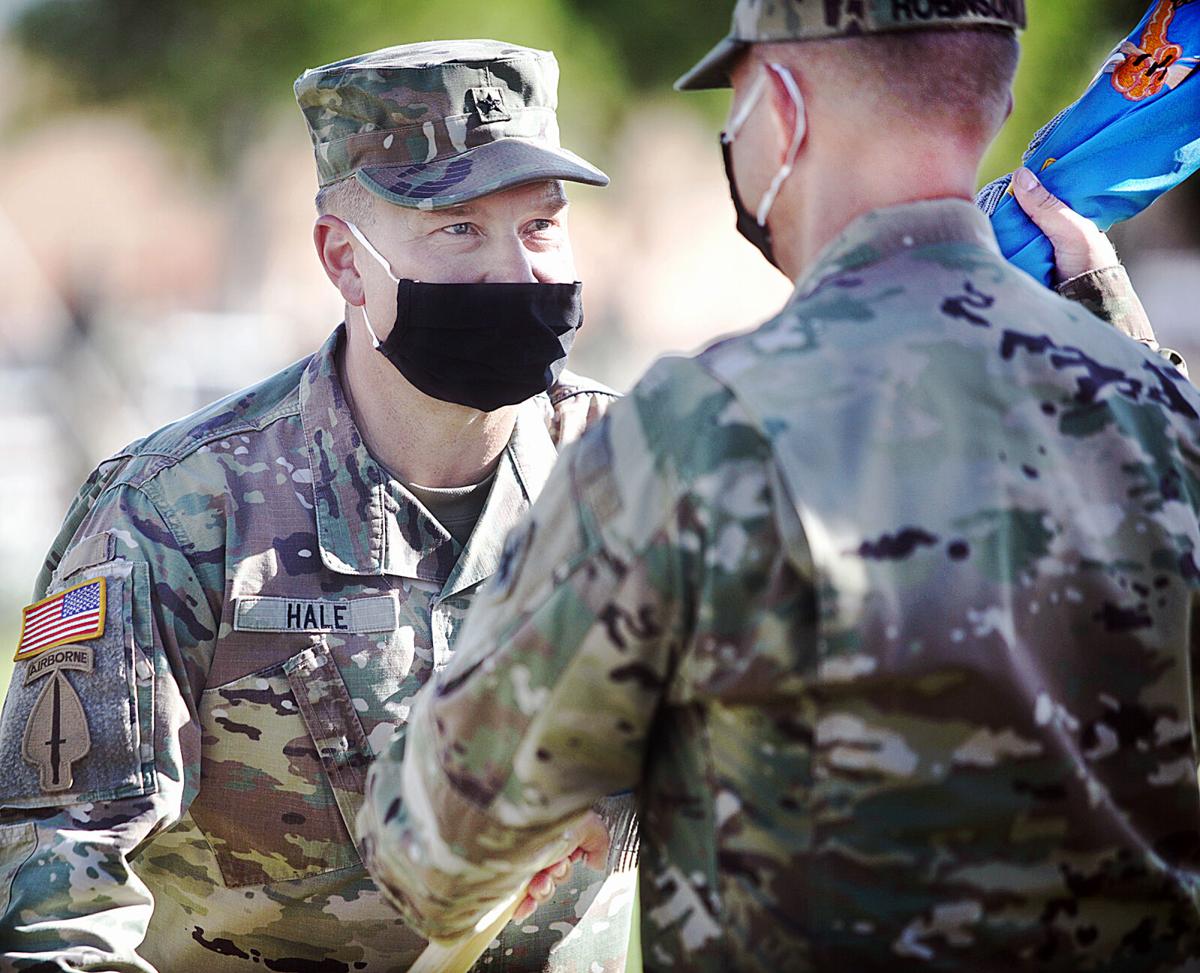 Incoming Brig. Gen. Anthony Hale hands the post colors over while participating in Tuesday morning’s Change of Command ceremony at Brown Parade Field on Fort Huachuca. Hale will be assuming command of the United States Army Intelligence Center of Excellence and Fort Huachuca. 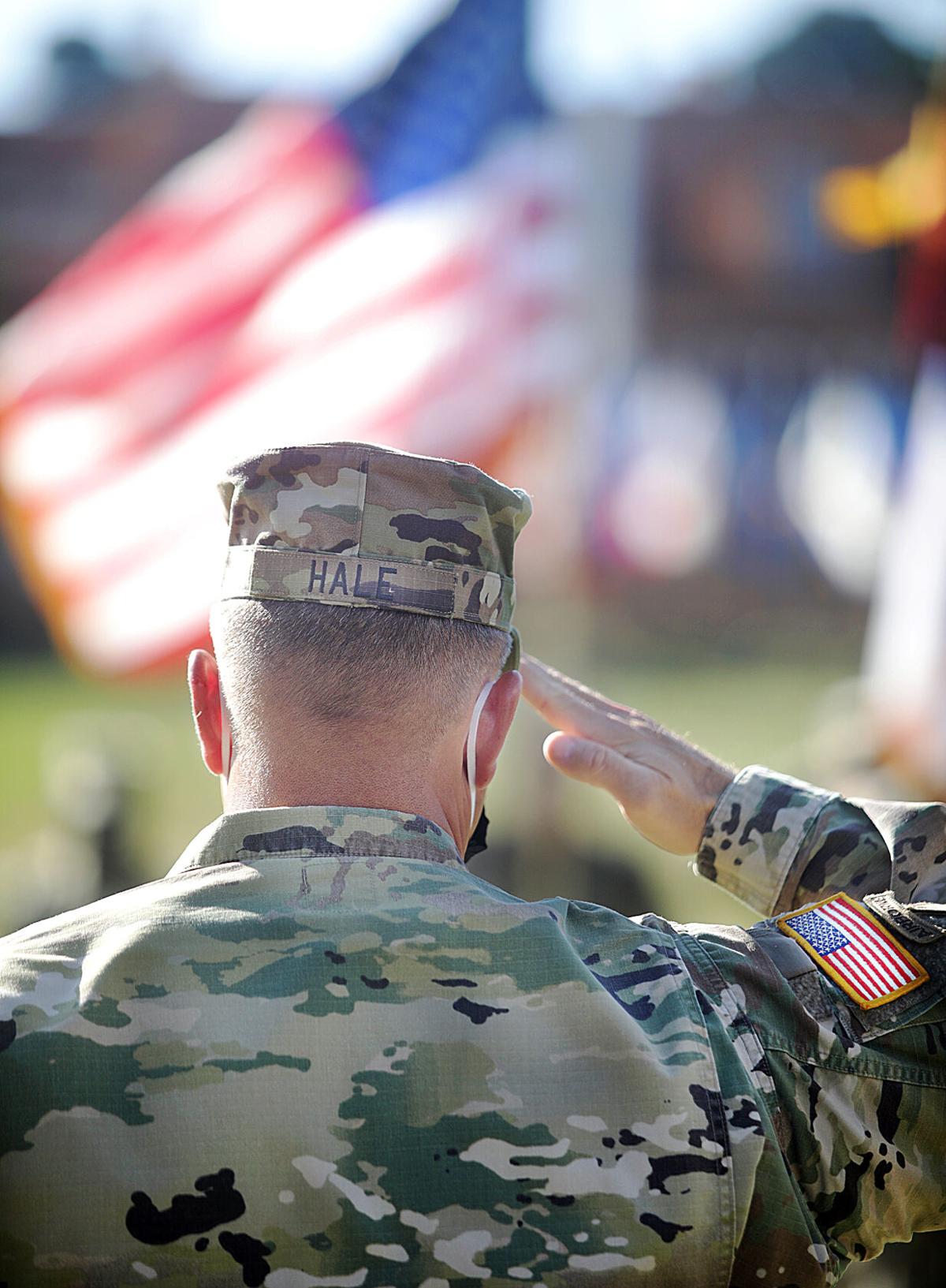 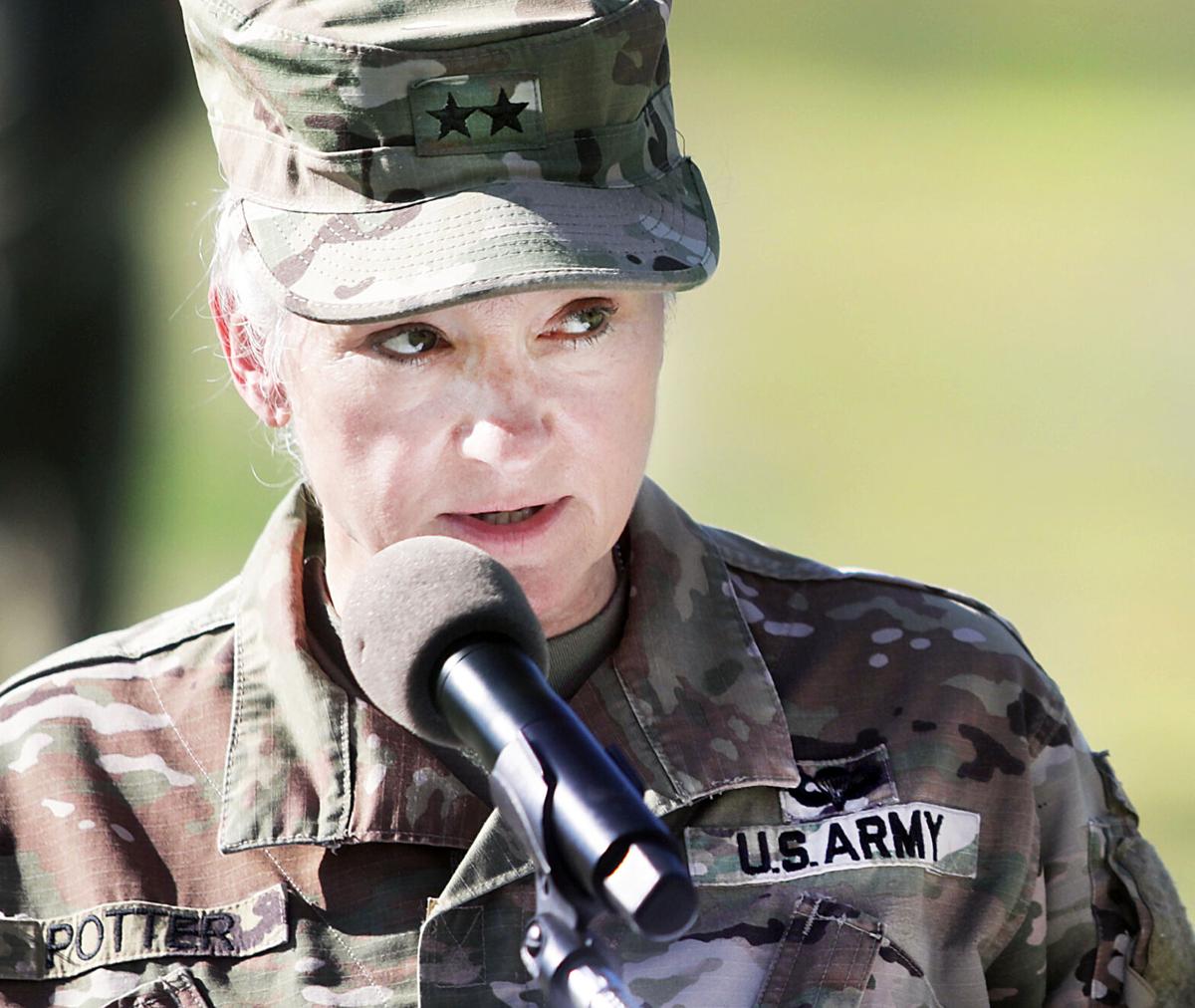 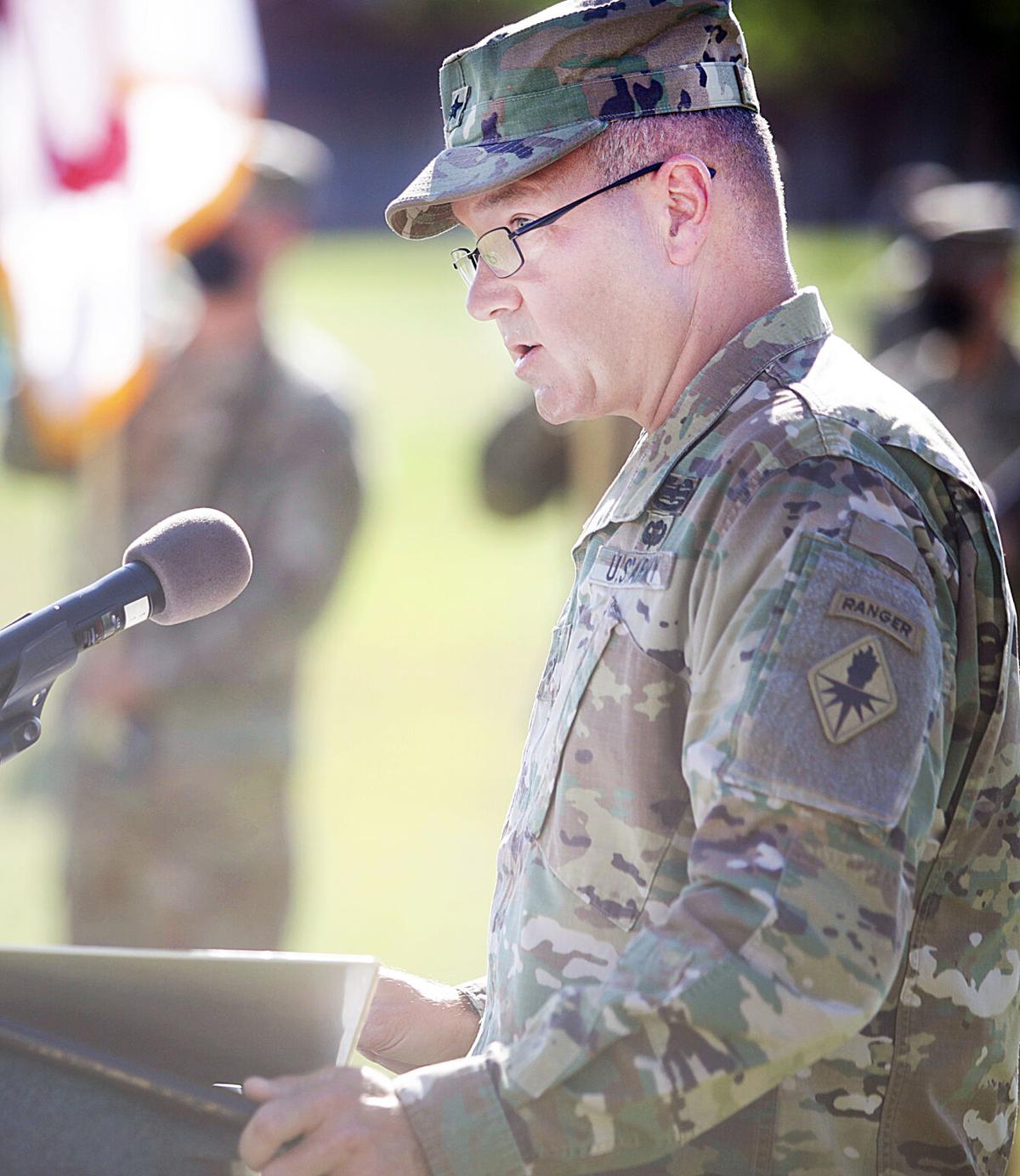 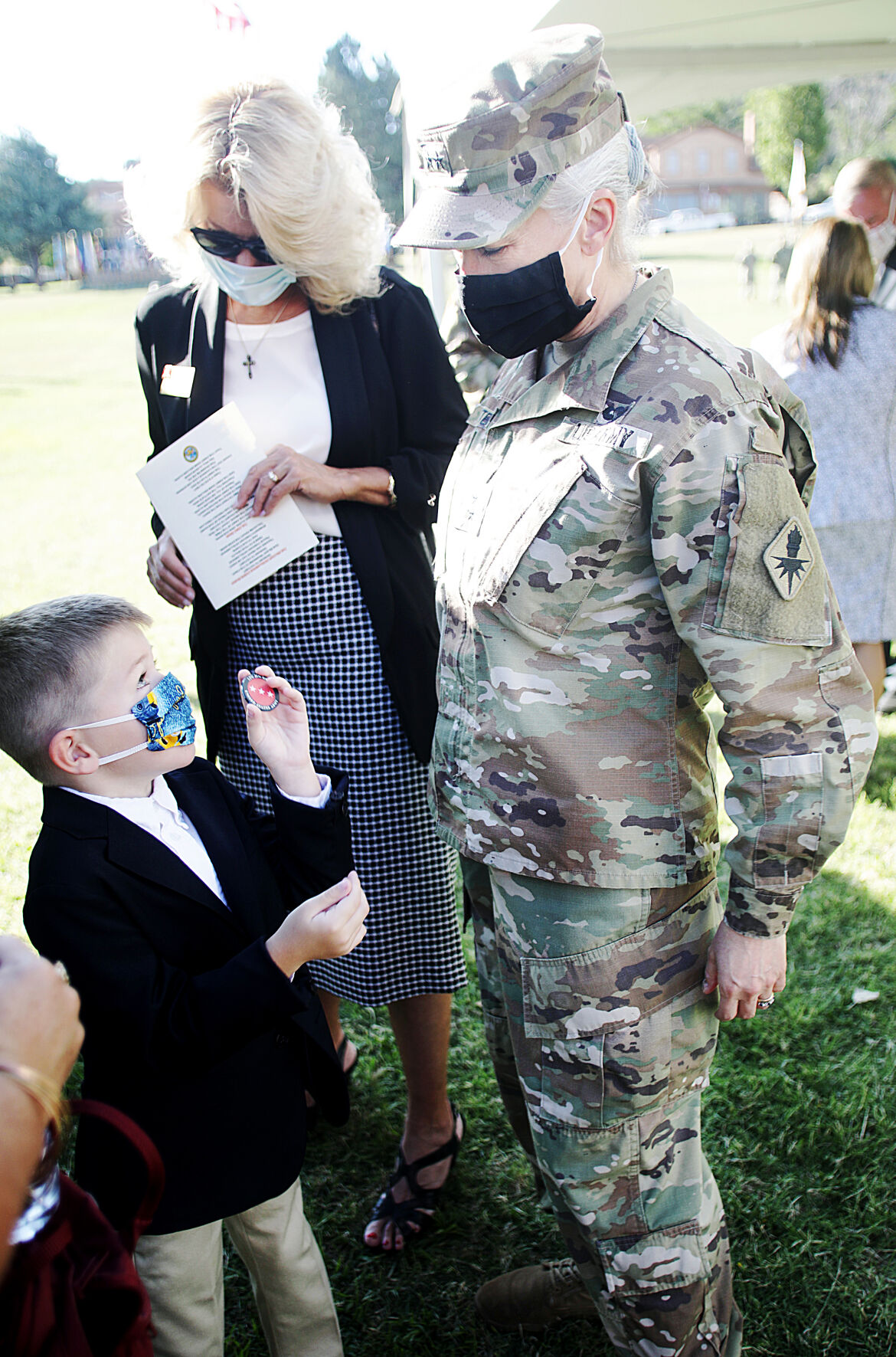 Robby Potter, 6, proudly displays a challenge coin he was given to his mother Maj. Gen. Laura Potter Tuesday. 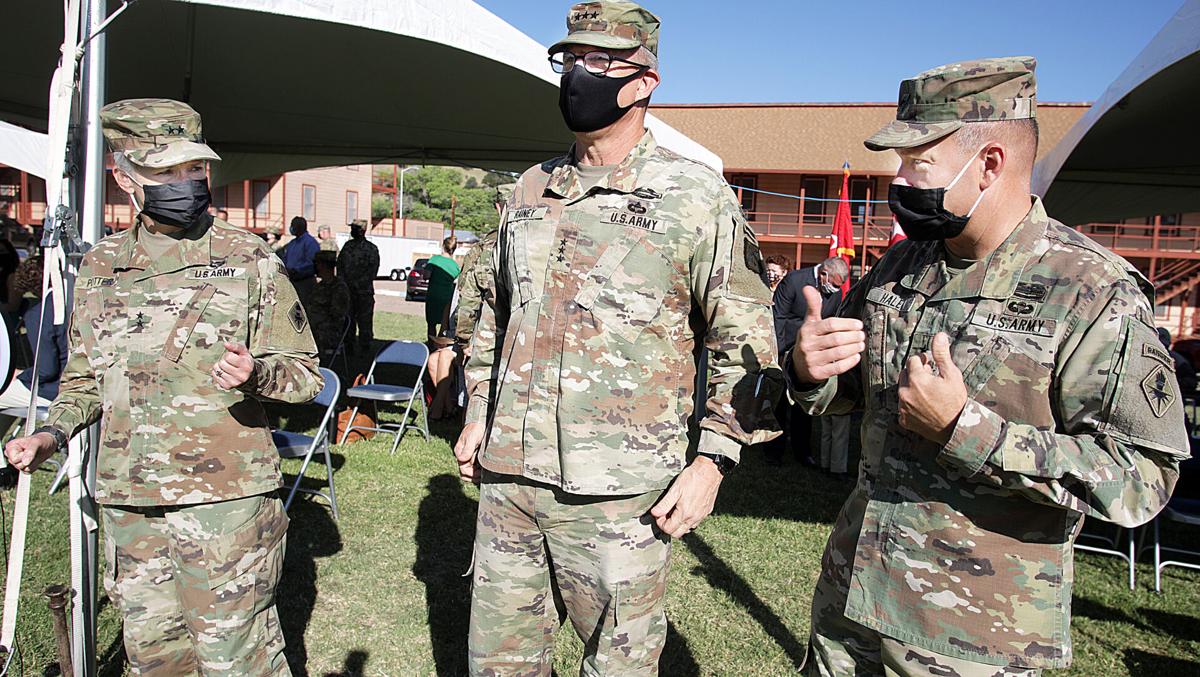 Incoming Brig. Gen. Anthony Hale hands the post colors over while participating in Tuesday morning’s Change of Command ceremony at Brown Parade Field on Fort Huachuca. Hale will be assuming command of the United States Army Intelligence Center of Excellence and Fort Huachuca.

Robby Potter, 6, proudly displays a challenge coin he was given to his mother Maj. Gen. Laura Potter Tuesday.

Brigadier General Anthony Hale was welcomed to Fort Huachuca with all the rich tradition that accompanies the change of command ceremony at Brown Parade Field. Except this time there were a few differences — everyone donned a face mask and the event came a year early.

Aside from that, the one-hour ceremony included all the honors and pomp and circumstance relegated to both Hale and departing commander general Laura Potter, including a 13-gun salute and the exhilarating cavalry charge for the exiting commander by the installation’s B Troop.

In between, there were words of inspiration, wisdom and friendship by Hale, Potter and Lt. Gen. James Rainey, Commanding General of the Combined Arms Center and Fort Leavenworth, who hosted the ceremony.

“It is an honor and privilege to join Team Huachuca,” said Hale, whose last assignment was as the Director of Intelligence, J-2, U.S. Special Operations Command, MacDill Air Force Base, Tampa.

“Thirty years ago I never thought I would be standing here. There is no greater responsibility and no greater charge than to be entrusted with command,” he added.

Hale thanked Potter and her family for making the transition to Fort Huachuca “seamless” for him and his wife Stacey. Stacey Hale meanwhile, was given a bouquet of yellow rosebuds which symbolize friendship and a “warm welcome to the new command.”

Rainey called Tuesday’s ceremony, “an act of love for Gen. Potter and her family.” He thanked her children Jack and Robby for being “great Army kids.” The boys were given coins of excellence for supporting their parents.

“This is a great team and an important part of our Army here at Fort Huachuca,” Rainey said. “Laura, thank you for your leadership and your incredible service during this command.”

Calling her a visionary leader, Rainey then let out a short chuckle and somewhat warned Potter about her future assignment: “You move on to a harder job and a harder place to work.”

Potter, who took command of Fort Huachuca just a little over a year ago in July 2019, was supposed to stay at the post until 2021.

But she was recently confirmed by the U.S. Senate to become a lieutenant general and Deputy Chief of Staff, G-2, United States Army, at the Pentagon.

Her new assignment begins in September, Potter said in a recent interview.

On Tuesday when she took the podium, Potter lauded the people who made her command successful. She mentioned that Fort Huachuca was the place where she and her husband met 31 years ago. Randy Potter is a retired Army lieutenant colonel.

“This is a great place to live and work,” Potter said. “I hope our paths cross again.”

To her successor Hale, Potter said: “Tony, I can’t think of a better person to take command of Fort Huachuca.”

After Hale and his wife were greeted by a line of well-wishers, he said the experience of being at Fort Huachuca is “amazing.”