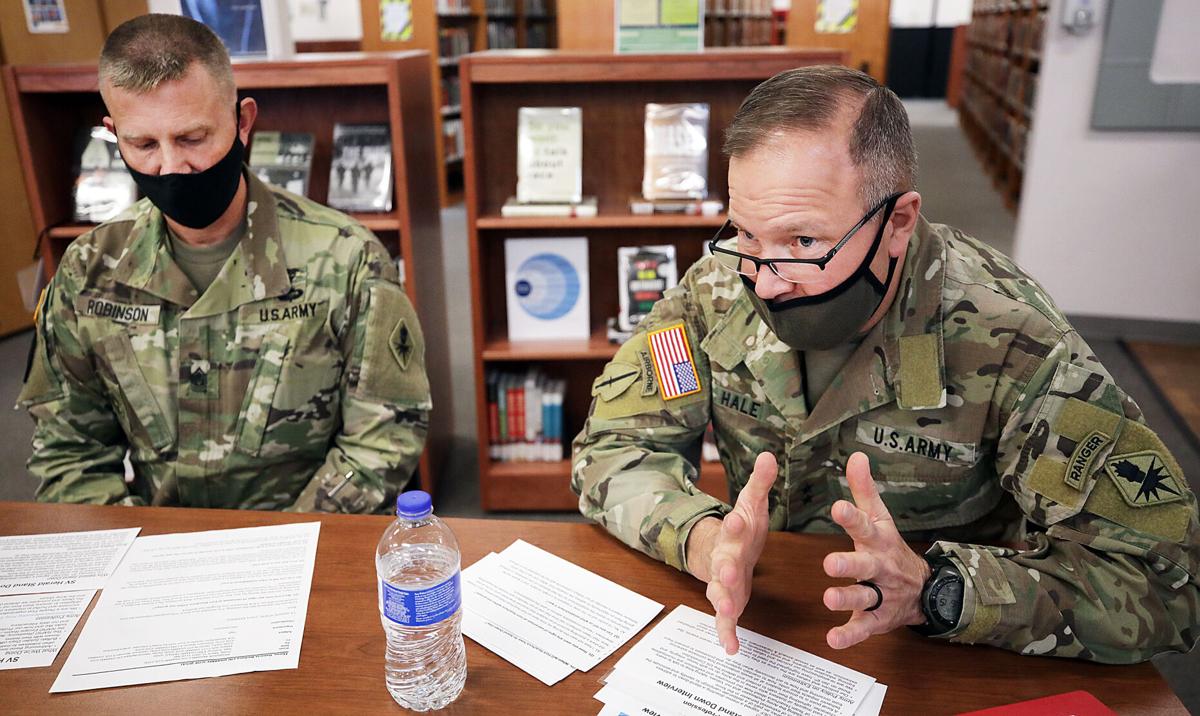 Fort Huachuca Command Sgt. Maj. Warren Robinson, left, and Maj. Gen. Tony Hale, commanding general of the U.S. Army Intelligence Center of Excellence and Fort Huachuca, meet in the post library to elaborate on the subject of the Stand Down Day for Extremism recently ordered by the new secretary of defense. 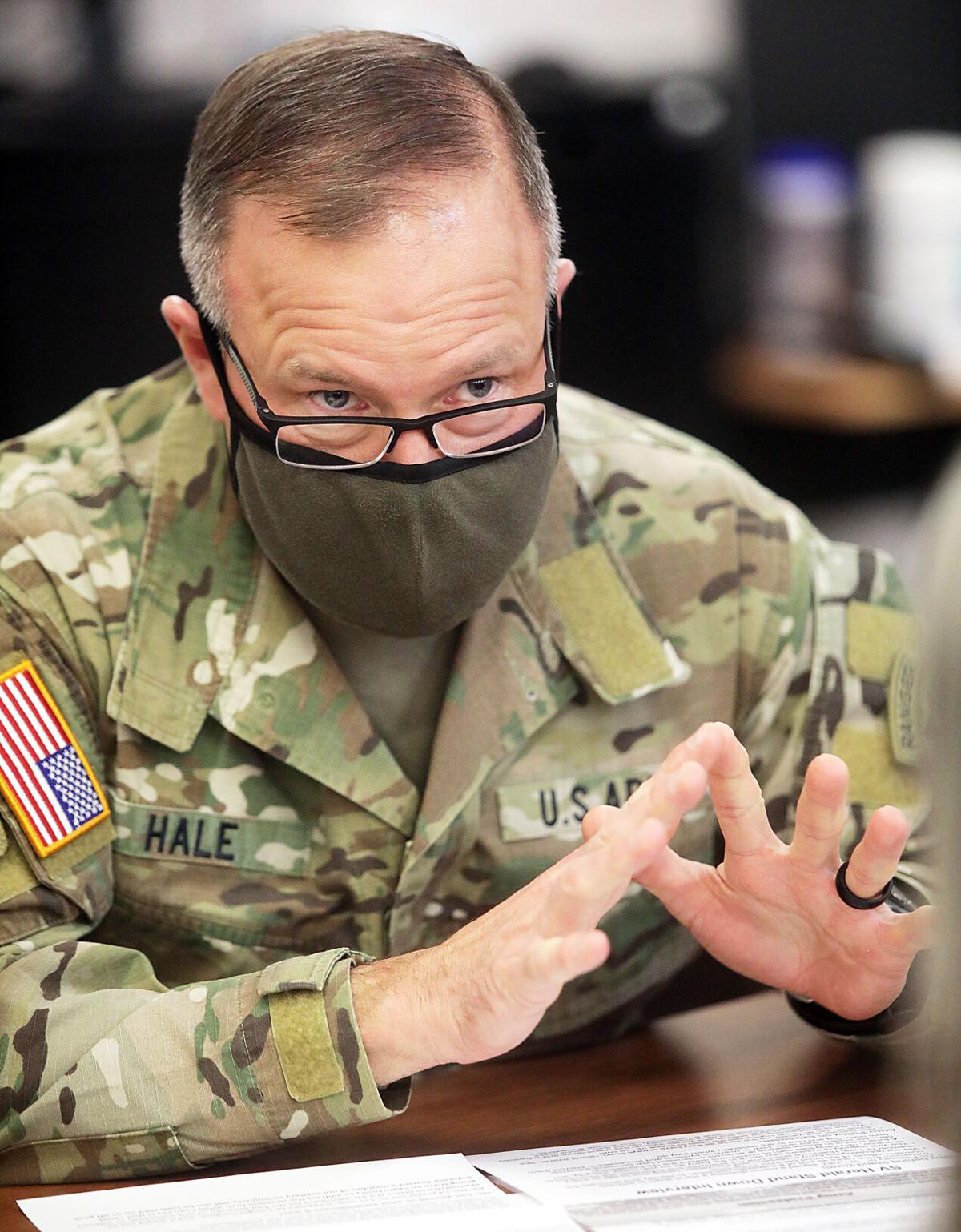 Maj. Gen. Tony Hale, commanding general of the U.S. Army Intelligence Center of Excellence and Fort Huachuca, talks about everything from racism, to sexual abuse, behaviors that Hale says will not be tolerated in his squad.

Fort Huachuca Command Sgt. Maj. Warren Robinson, left, and Maj. Gen. Tony Hale, commanding general of the U.S. Army Intelligence Center of Excellence and Fort Huachuca, meet in the post library to elaborate on the subject of the Stand Down Day for Extremism recently ordered by the new secretary of defense.

Maj. Gen. Tony Hale, commanding general of the U.S. Army Intelligence Center of Excellence and Fort Huachuca, talks about everything from racism, to sexual abuse, behaviors that Hale says will not be tolerated in his squad.

FORT HUACHUCA— For an entire week at the installation, top commanders, junior leaders, support staff and soldiers focused on fighting a different kind of enemy — extremist beliefs that lead to racism, sexual harassment and sexual abuse.

The talks at Fort Huachuca among the brigades, battalions and companies were held after a directive from U.S. Secretary of Defense Lloyd Austin asked that every installation conduct a “Stand-Down to Address Extremism in the Ranks.” The latter was to be executed for at least one day and had to be scheduled no later than 60 days after Austin’s memo of Feb. 5.

Because Austin afforded leaders the chance to “tailor” their discussions and how they presented them, Fort Huachuca embarked on a weeklong series of talks and exercises titled “Army Profession Week” that started on March 15 and ended on March 19.

“It’s part of a deliberate campaign to identify and eliminate any corrosives that affect extremism in our force,” said Fort Huachuca commander Maj. Gen. Tony Hale. “We’re taking time out to talk to every member of Team Huachuca about our principles and how extremism is incompatible with the Army.”

In his memo to senior Pentagon leadership, Defense Agency and Department of Defense Field Activity Directors, Austin said: “We will not tolerate actions that go against the fundamental principles of the oath we share, including actions associated with extremist or dissident ideologies. Service members, DoD civilian employees, and all those who support our mission, deserve an environment free of discrimination, hate, and harassment. It is incumbent upon each of us to ensure that actions associated with these corrosive behaviors are prevented. Commanders, supervisors, and all those who hold a leadership position within the Department have a special responsibility to guard against these behaviors and set the example for those they lead.

“This stand-down is just the first initiative of what I believe must be a concerted effort to better educate ourselves and our people about the scope of this problem and to develop sustainable ways to eliminate the corrosive effects that extremist ideology and conduct have on the workforce. We owe it to the oath we each took and the trust the American people have in our institution.”

Command Sgt. Maj. Warren “Kelly” Robinson said holding the discussions in small groups was key in getting soldiers to open up about the difficult topics.

“That enhances the opportunity for soldiers to actually talk,” Robinson said. “If the groups get too big, people are not comfortable speaking ... This could potentially be a difficult conversation for somebody depending on where you’re from and the life experiences that you bring.”

Robinson said soldiers already know how he and Hale feel about extremist behavior, but it was important for them to hear how their frontline leaders felt about it too.

“ ... Who they really need to hear it from is their immediate superiors because that’s who they work with every day,” Robinson said.

Leaders and commanders who conducted talks within small groups across the installation were supported by experts such as the sexual assault and suicide prevention program managers, Hale said.

The major general said he has not experienced any issues with extremism since he arrived at Fort Huachuca seven months ago, but he has conversed with soldiers who told him they have been on the receiving end of such behavior.

“In conversations with soldiers, some have shared some disturbing accounts of how they have been treated not only potentially in the installation, but also in the local community,” Hale said. “But as i have said, 99 percent of our soldiers adhere to the Army values and there is no place for extremism in my squad.

“In a career of 32 years, yes, you may hear some comments that are inappropriate and that is when a leader and everyone should step forward and say, ‘Hey, this is not right and we don’t tolerate that in our force, in our Army,’ “ Hale added.

After the installation’s Army Profession Week ended last Friday, Hale was pleased how it unfolded.

“This week’s training went very, very well,” Hale said in an email. “Soldiers and leaders across Team Huachuca were involved and engaged. The candid discussions were had respectfully and with open minds, which speaks to the talent and professionalism of our force.

“You know the vast majority of soldiers serve with honor,” Hale added. “Unlike many organizations, the Army is not just our job, it’s a profession. Our oaths of office encapsulate this profession, the idea that what we do has intrinsic value and purpose. We vow to support and defend the Constitution of the United States against all enemies, foreign and domestic. We hold ourselves to a higher standard. Including every member and treating them with dignity and respect is one of the best ways to prevent corrosives in our Army.

“We have a zero tolerance policy on sexual assault and sexual harassment. We also have no room in our Army for racism or extremism. These behaviors are not in line with the Army’s professional nor our core values and will not be tolerated in our formations.”