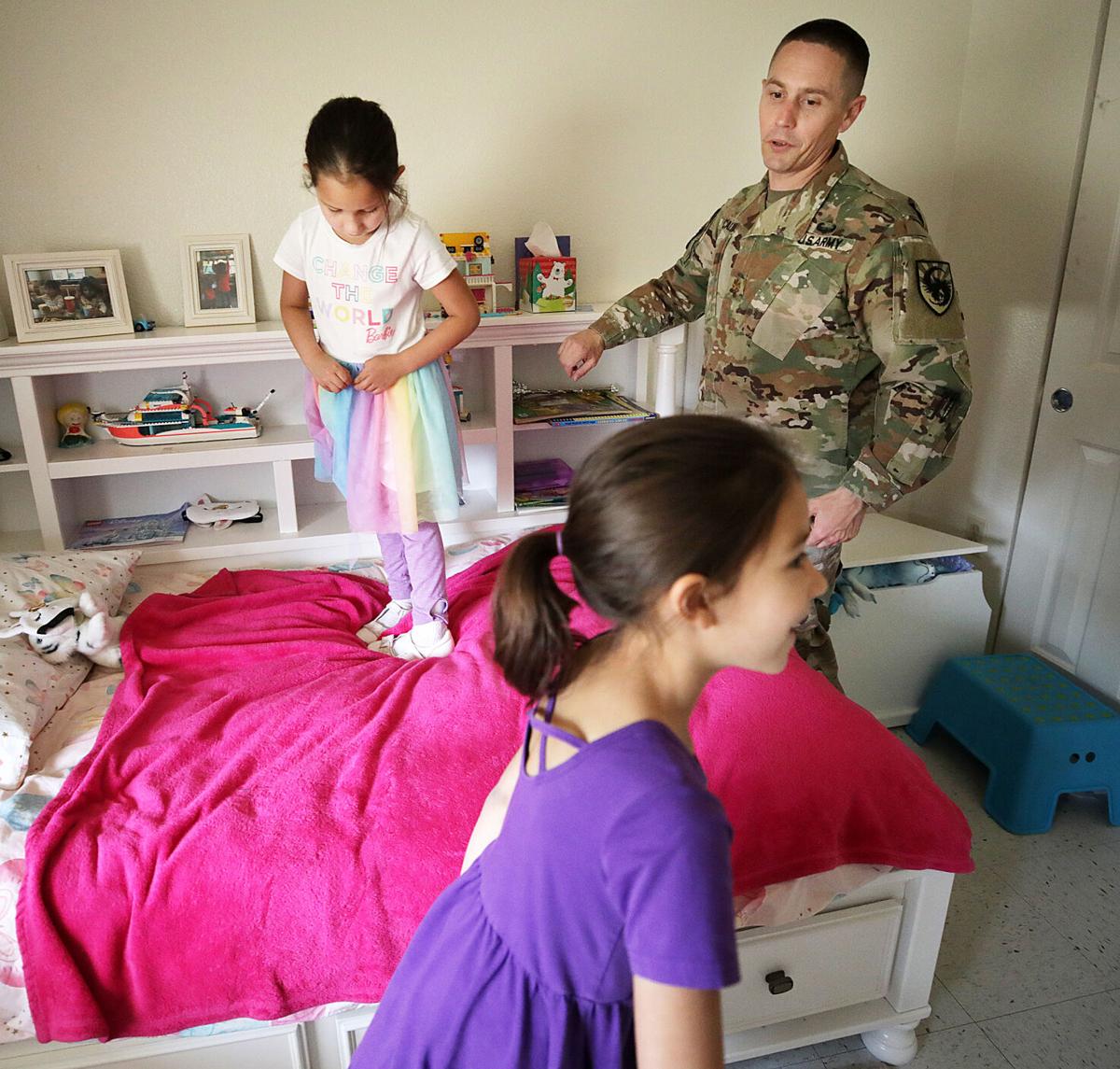 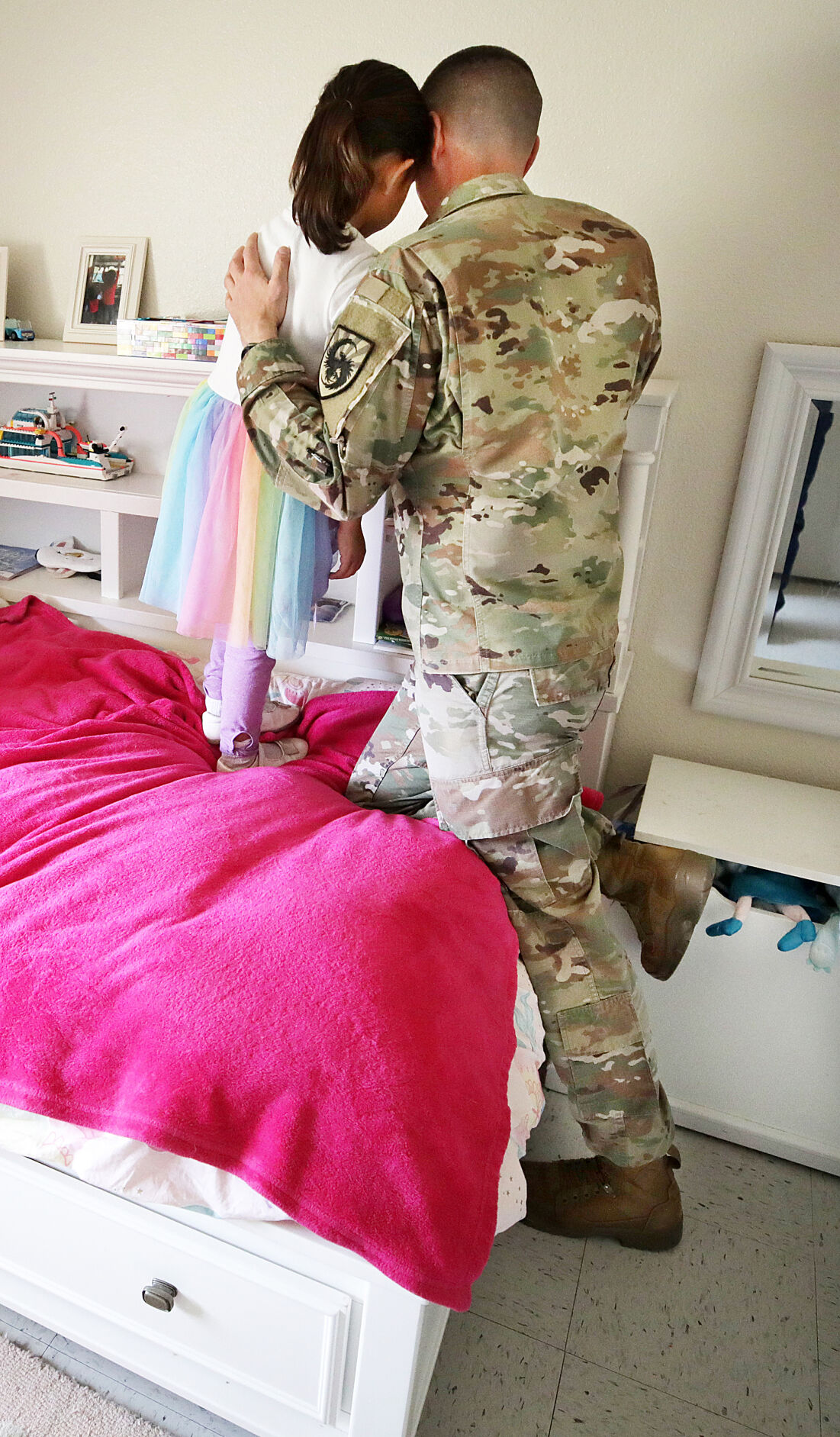 Maj. Robert Calkins shares a tender moment with his 5-year-old daughter, Gabriella, Friday in their home on Fort Huachuca. 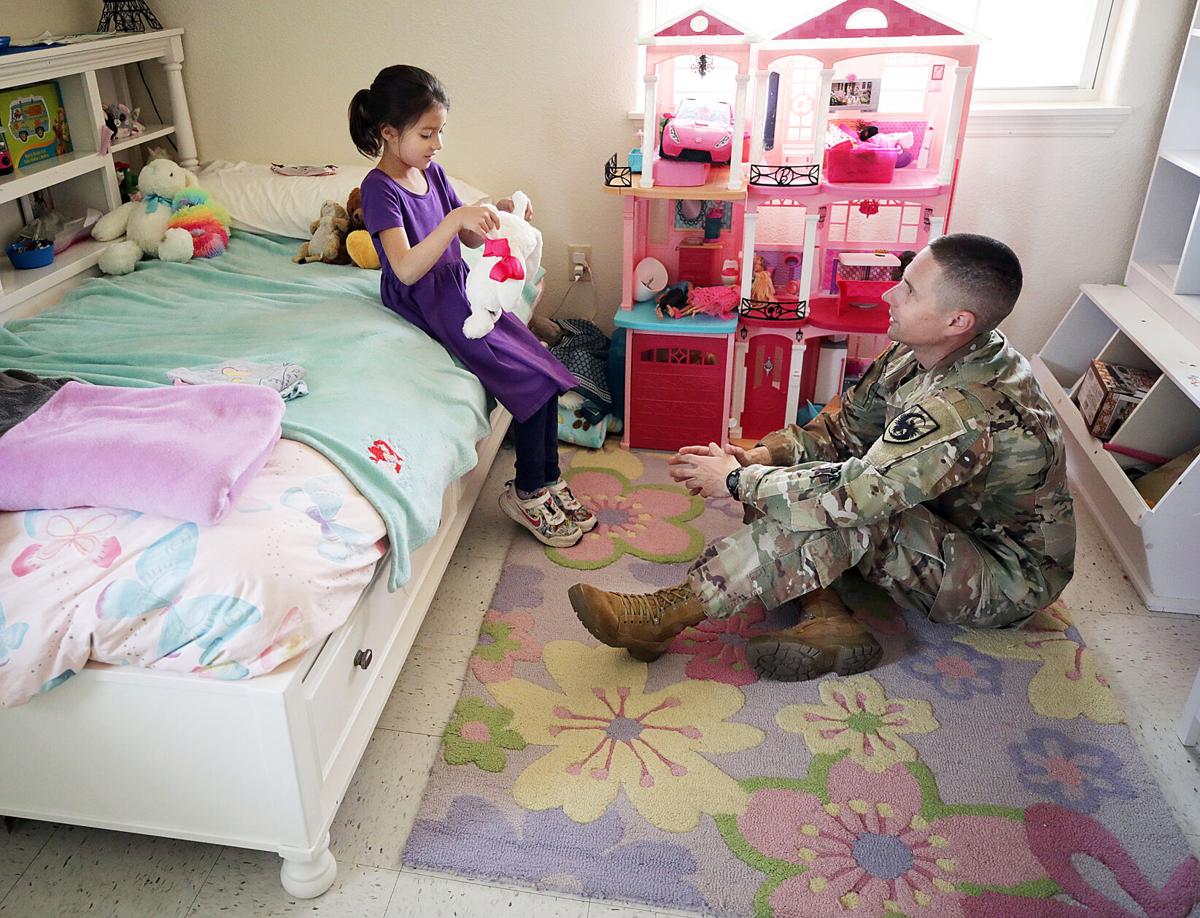 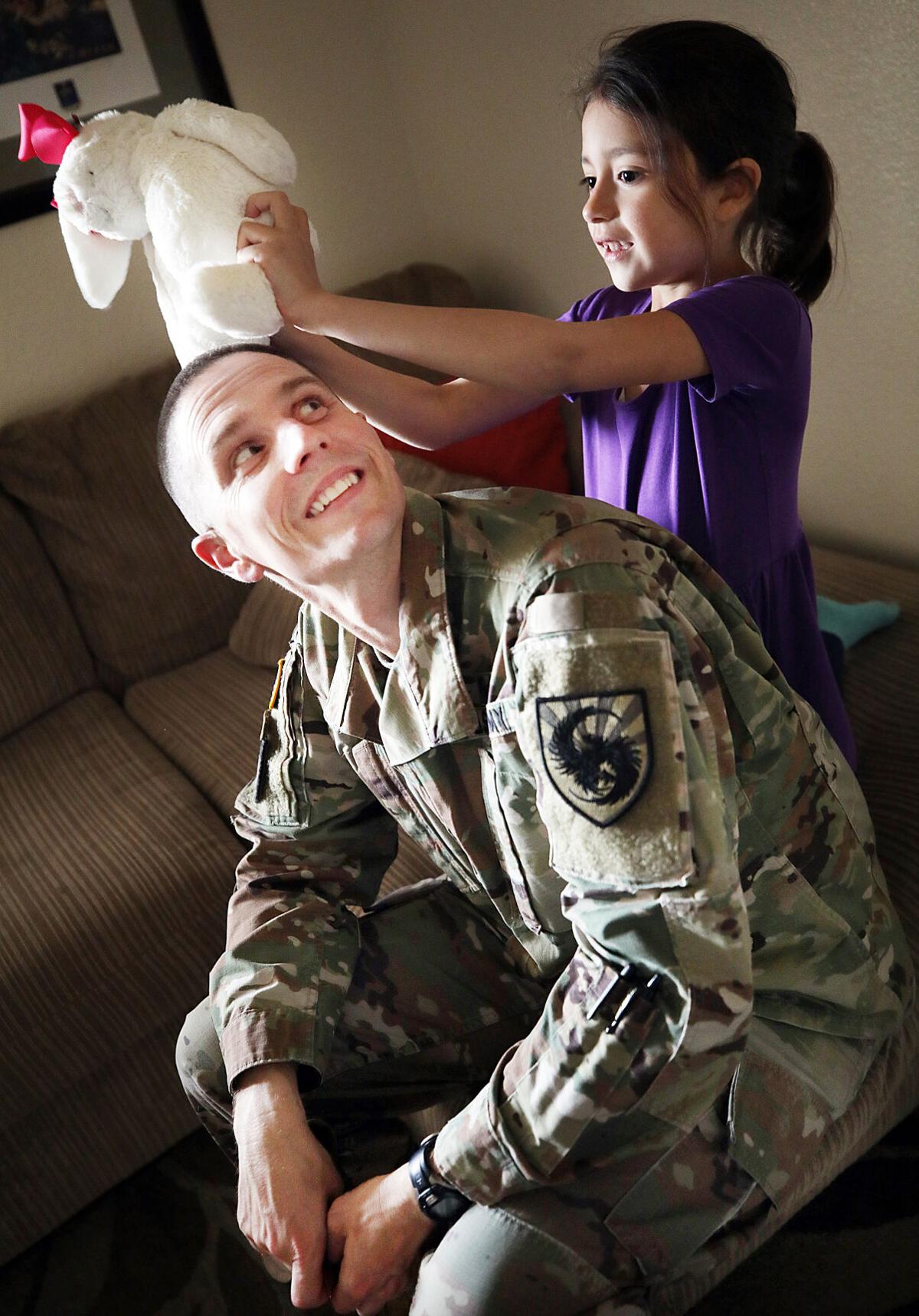 Robert Calkins and Elaina Calkins, 7, have some father-daughter fun in their Fort Huachuca home. 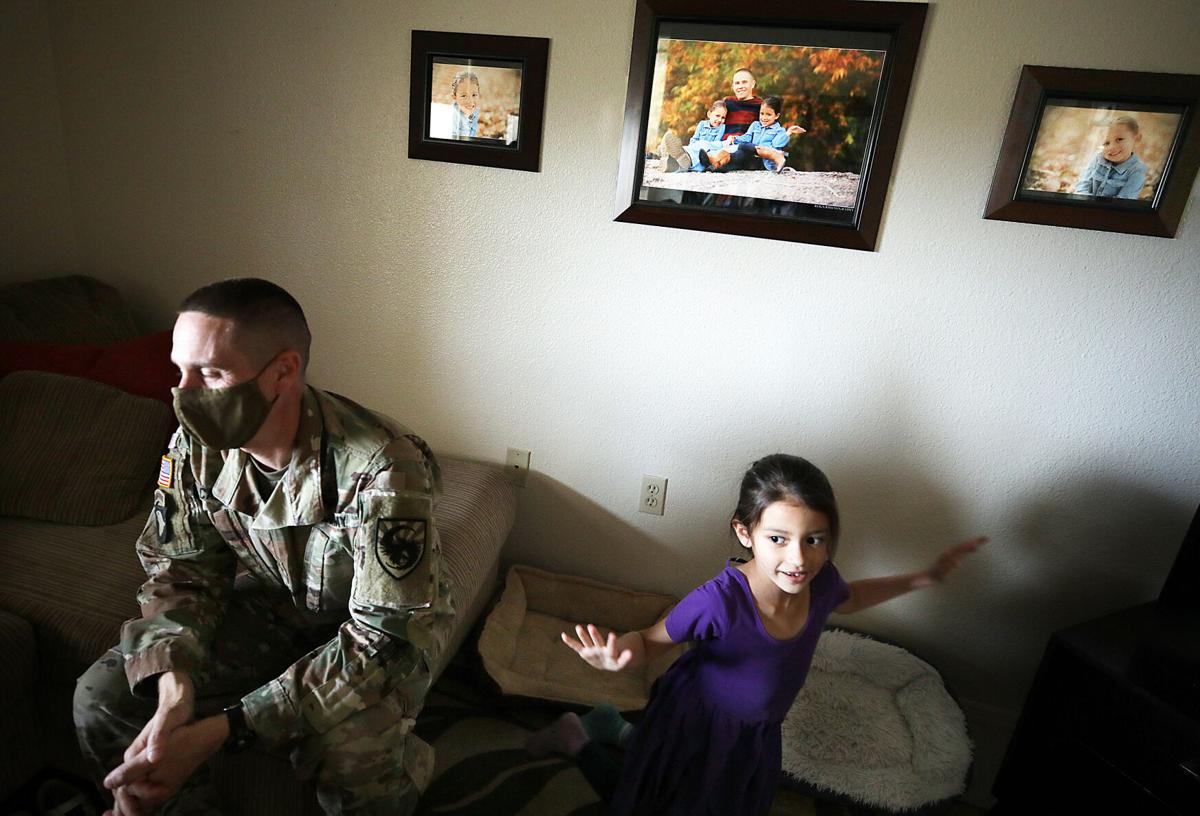 Army Maj. Robert Calkins is on a four-year assignment on Fort Huachuca. He and his daughters have been on post for three years.

The Calkins sisters play in their Fort Huachuca home. 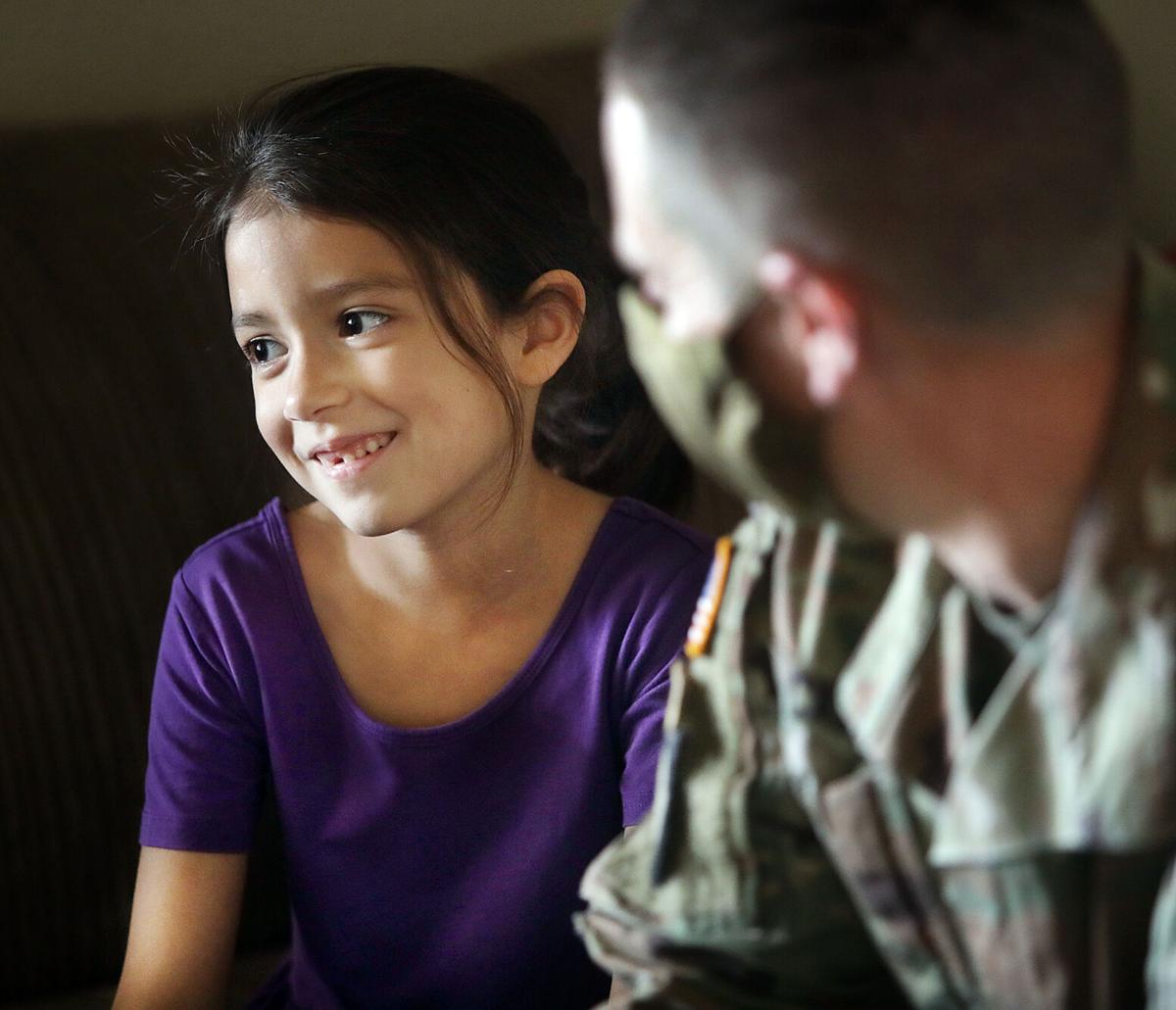 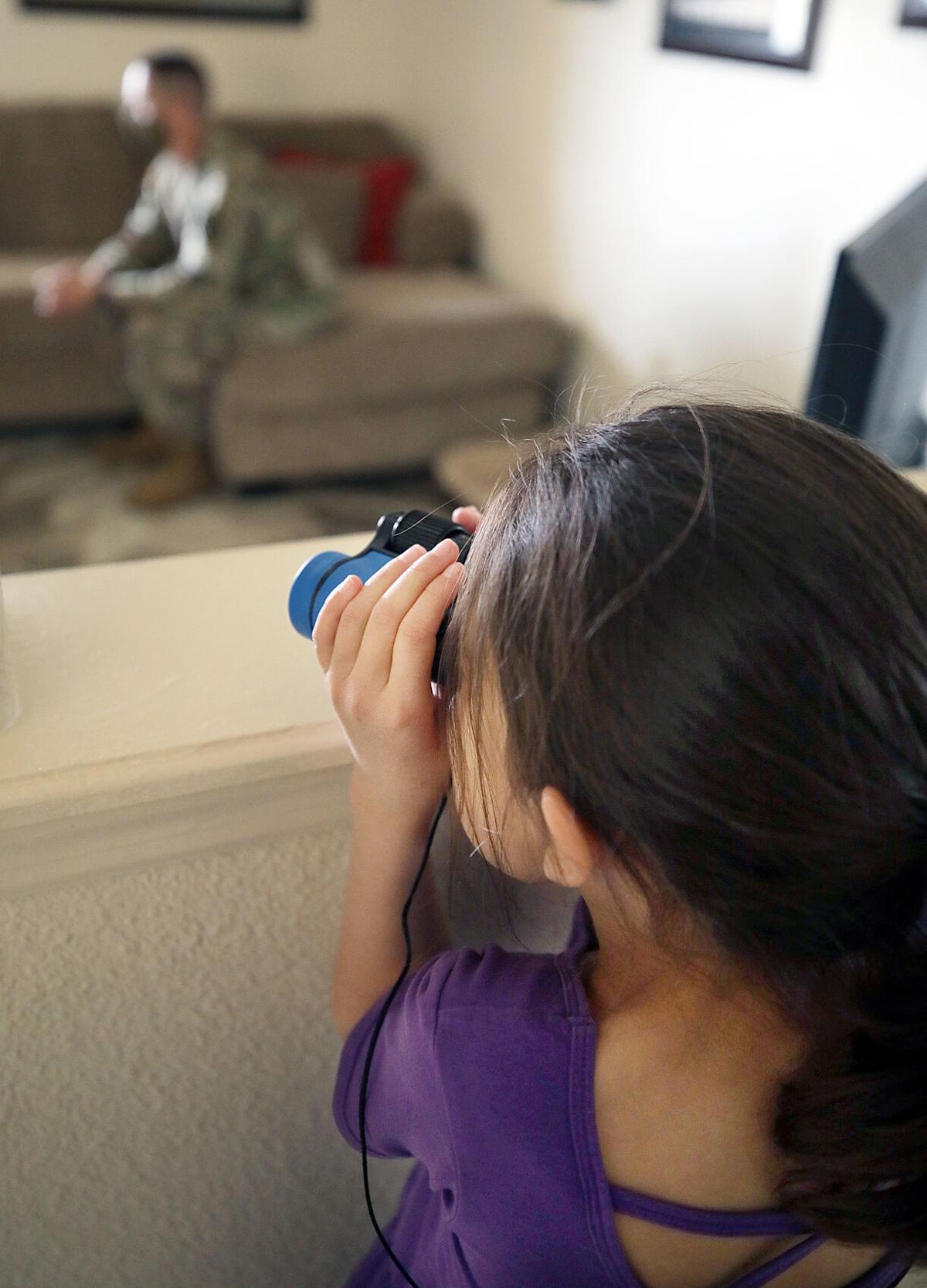 Elaina Calkins plays at her home. 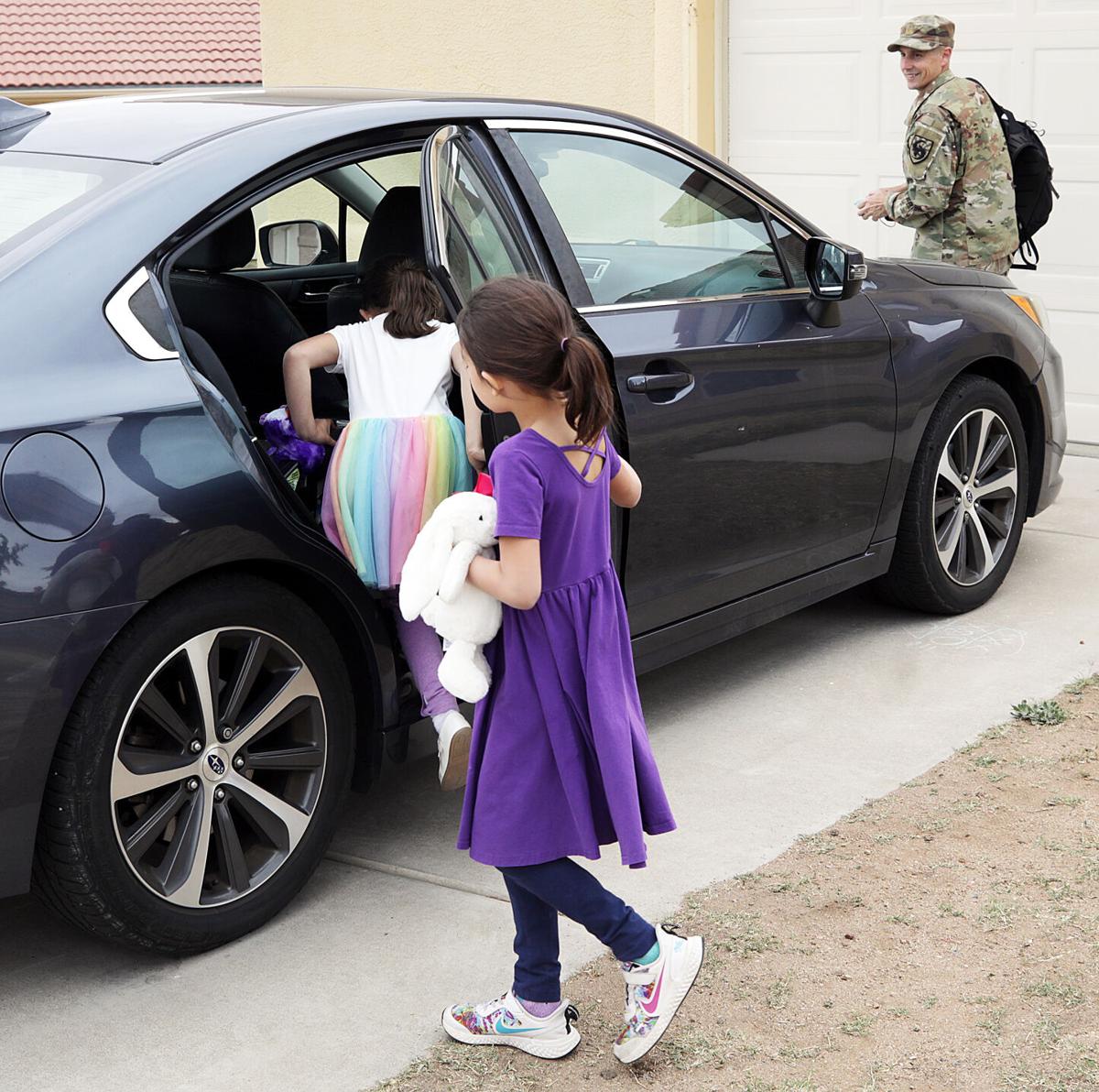 The Calkins family gets ready for a ride.

Maj. Robert Calkins shares a tender moment with his 5-year-old daughter, Gabriella, Friday in their home on Fort Huachuca.

Robert Calkins and Elaina Calkins, 7, have some father-daughter fun in their Fort Huachuca home.

Army Maj. Robert Calkins is on a four-year assignment on Fort Huachuca. He and his daughters have been on post for three years.

The Calkins sisters play in their Fort Huachuca home.

Elaina Calkins plays at her home.

The Calkins family gets ready for a ride.

FORT HUACHUCA — At 7 years of age, Elaina Calkins doesn’t fully comprehend the significance of her father’s job in the U.S. Army. But as a military child, the first-grader is beginning to understand that people come and go and that a favorite house or school is not always permanent.

Elaina and her 5-year-old sister, Gabriella Calkins, are among the hundreds of thousands of military children around the world who are honored each April by the Department of Defense during the Month of the Military Child.

Created in the mid-1980s by then Secretary of Defense Caspar Weinberger, the Pentagon and other military support organizations and agencies use the month to recognize military children for their sacrifice and bravery on the homefront. While a lot of military youngsters get to live in places that many adults would never see, the constant change and upheaval can often be emotionally taxing.

But military parents have long said such moves can also build resiliency. That’s what Army 1st Sgt. Michael Hull, who is stationed at Fort Huachuca, says about his two sons. Hull said his boys — ages 11 and 16 — have always embraced the moves and the adventures that come with them.

He said he’s thought about his children and their ability to make lifelong friends and how that might have been affected by having a father in the Army.

“But it’s actually been the opposite,” Hull said Friday in a phone interview. “They’ve been excited every time (we have moved) and I think that’s what develops resiliency.”

The Hull children are about to experience a bit more permanency in their young lives. In June, Hull completes his second year at Fort Huachuca. The 41-year-old soldier plans to retire and stay in Tucson. He said his oldest son started high school there two years ago and he wants to see him finish. His youngest child is in fifth grade.

“They’re starting to get established,” Hull said of his children.

The Calkins sisters are just getting started on their adventure. Their father, Army Maj. Robert Calkins, the battalion executive officer in the 309th Military Intelligence Battalion at Fort Huachuca, said moving to the installation almost three years ago was the first significant move experienced by his daughters. Both were born at Joint Base Lewis-McChord in Washington, and the oldest, Elaina, already knows the family — Calkins is a single parent — only has one year left at Fort Huachuca before they have to go.

Leaving Joint Base Lewis-McChord was not easy for the girls, Calkins said.

Calkins said he has tried to tell the girls that Fort Huachuca is not forever, either.

Also 41, Calkins, an 18-year veteran of the Army, has been deployed twice — once to Iraq and once to Afghanistan. He expects he will be deployed again and has already planned to leave the children with their mother in Texas.

He said his daughter, Gabriella, has not yet grasped the concept of leaving people behind, but his older daughter has.

“Unfortunately for Elaina, her best friend moved away six months after her father retired from the military,” Calkins said. “She is starting to understand the concept that people come and go. Honestly, that’s the hardest part of being a military child— having to get new friends when you get to a new location, as well as seeing your friends go.”

He is starting to see resiliency in both his children. He said both understand when he has to finish work at home after a long day or if he’s going to be a little late picking them up at the after-school center on the installation. Neither child really understands the gravity of his work or that he commands 850 soldiers.

Fort Huachuca spokeswoman Tanja Linton, a military child of an Air Force father, wrote an article in 2015 about her experiences as a “military brat.”

In that story she mentioned that “some social scientists have described them (military children) as one of America’s oldest and yet least well-known nomadic subcultures.”

Linton said one of the symbols for military children is the dandelion.

“They bloom wherever they’re planted,” she said.