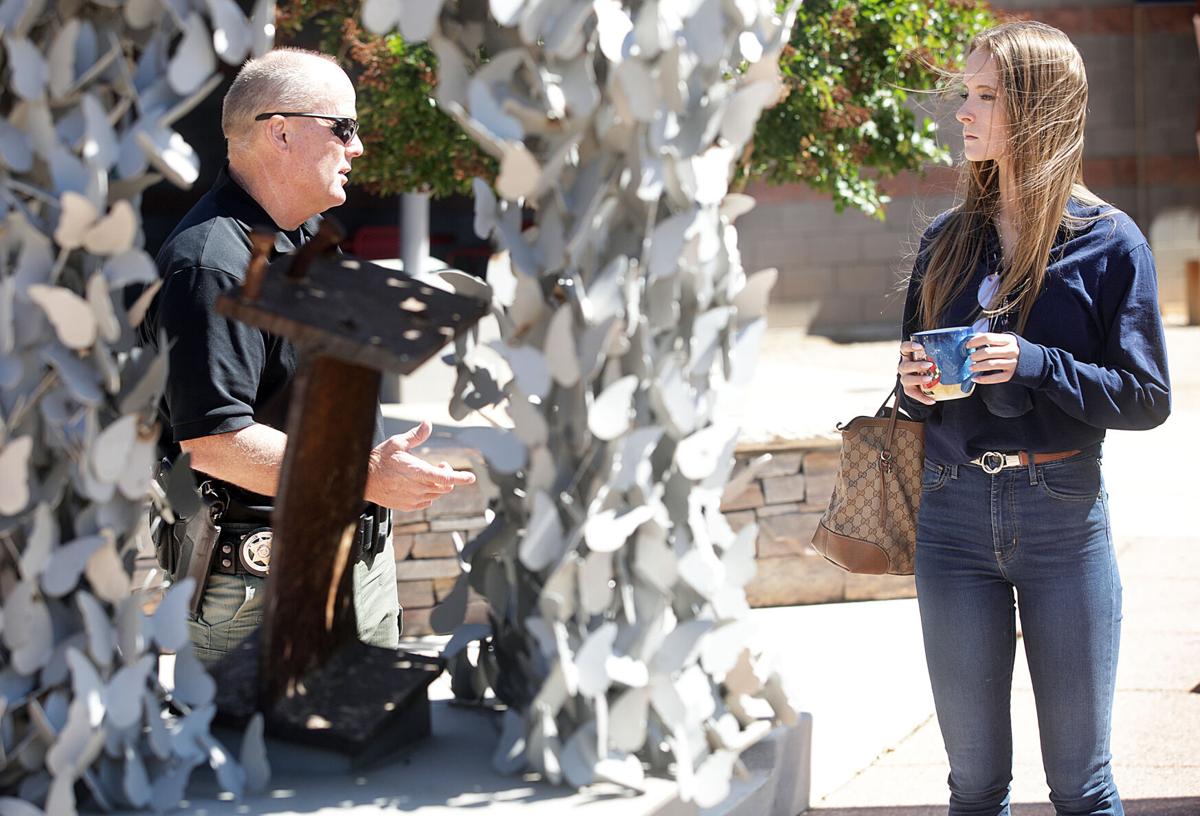 Cochise County Sheriff Mark Dannels talks with Megan Fitzgerald, public safety and military affairs policy advisor with the governor’s office, about border issues while they were in front of the Sierra Vista Fire and Medical Services Station 3 facility Friday. 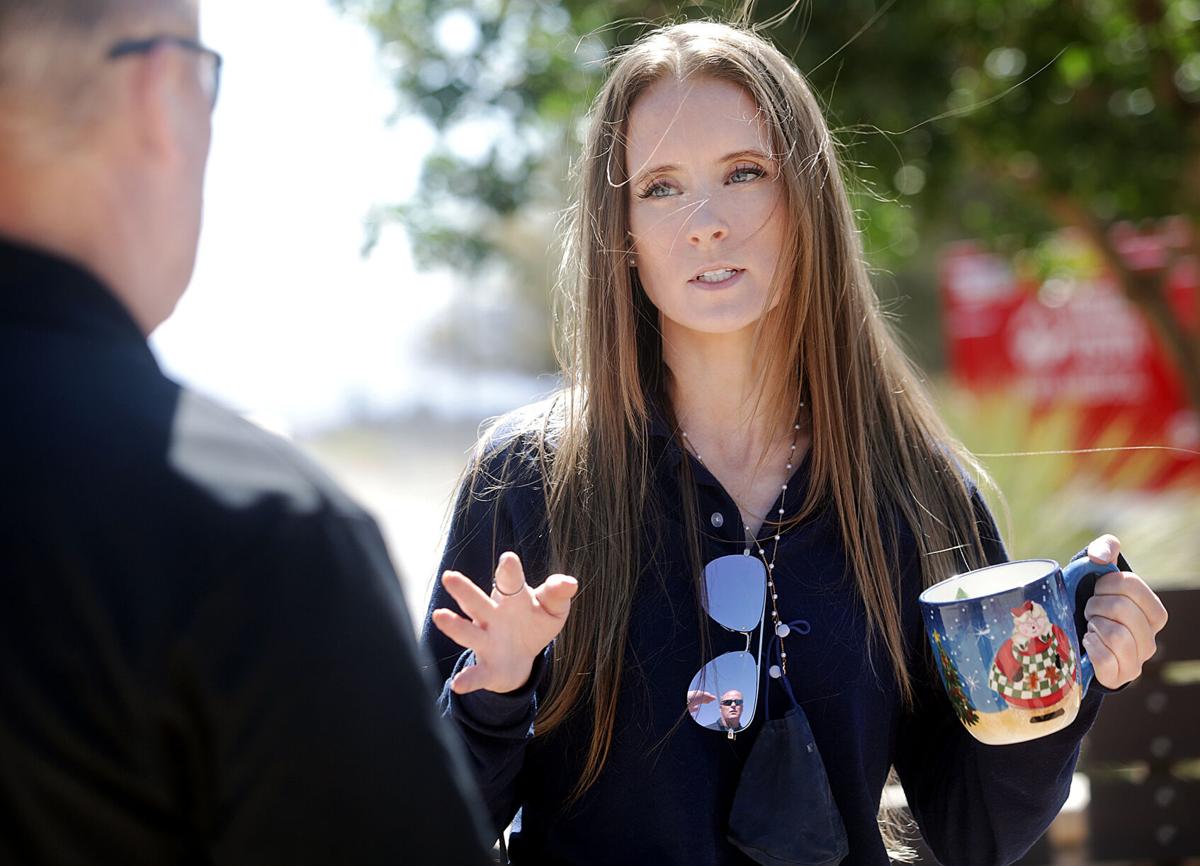 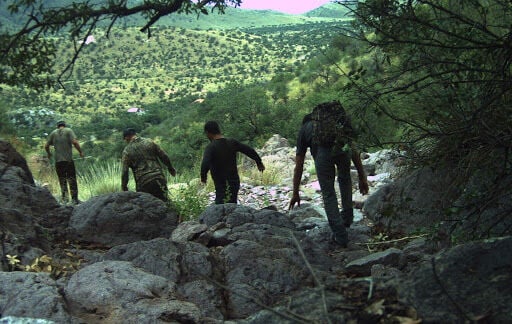 Migrants are often captured crossing the border illegally by the many cameras the Cochise County Sheriff's Office has deployed along the international boundary. 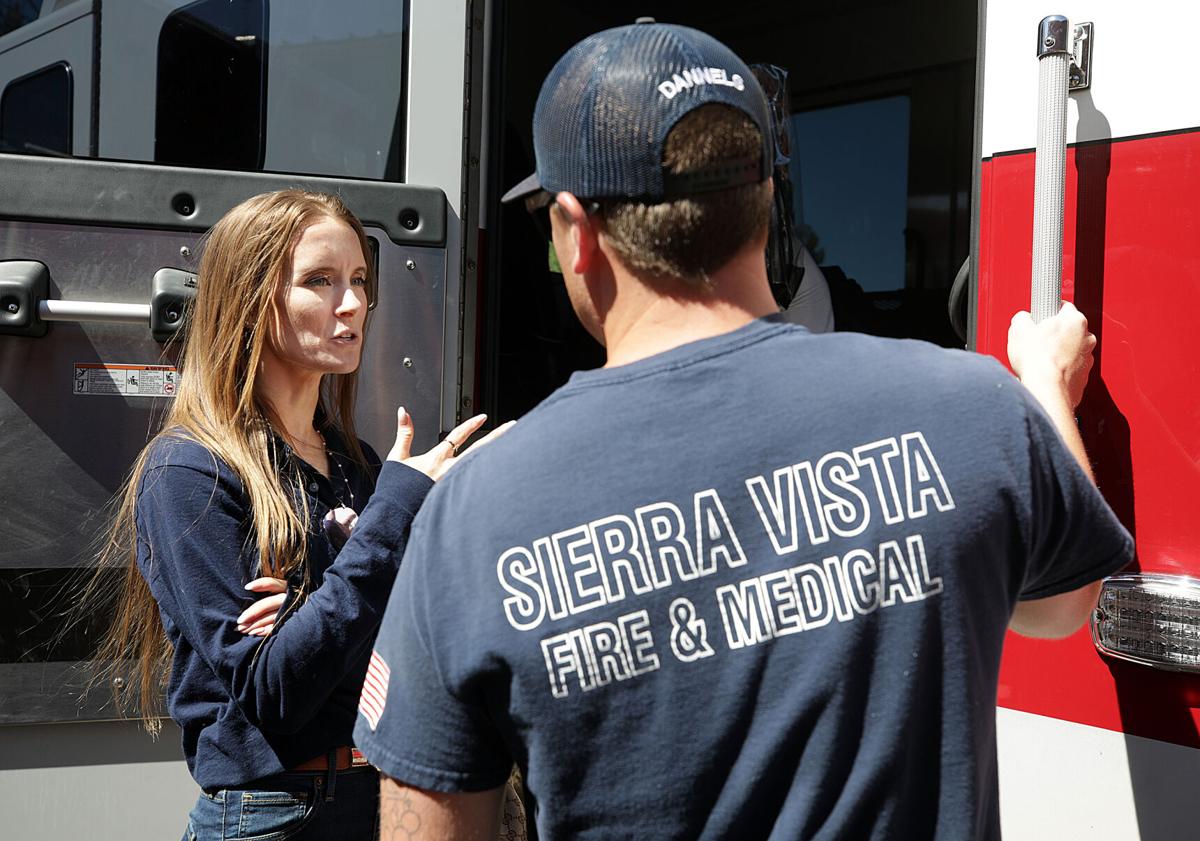 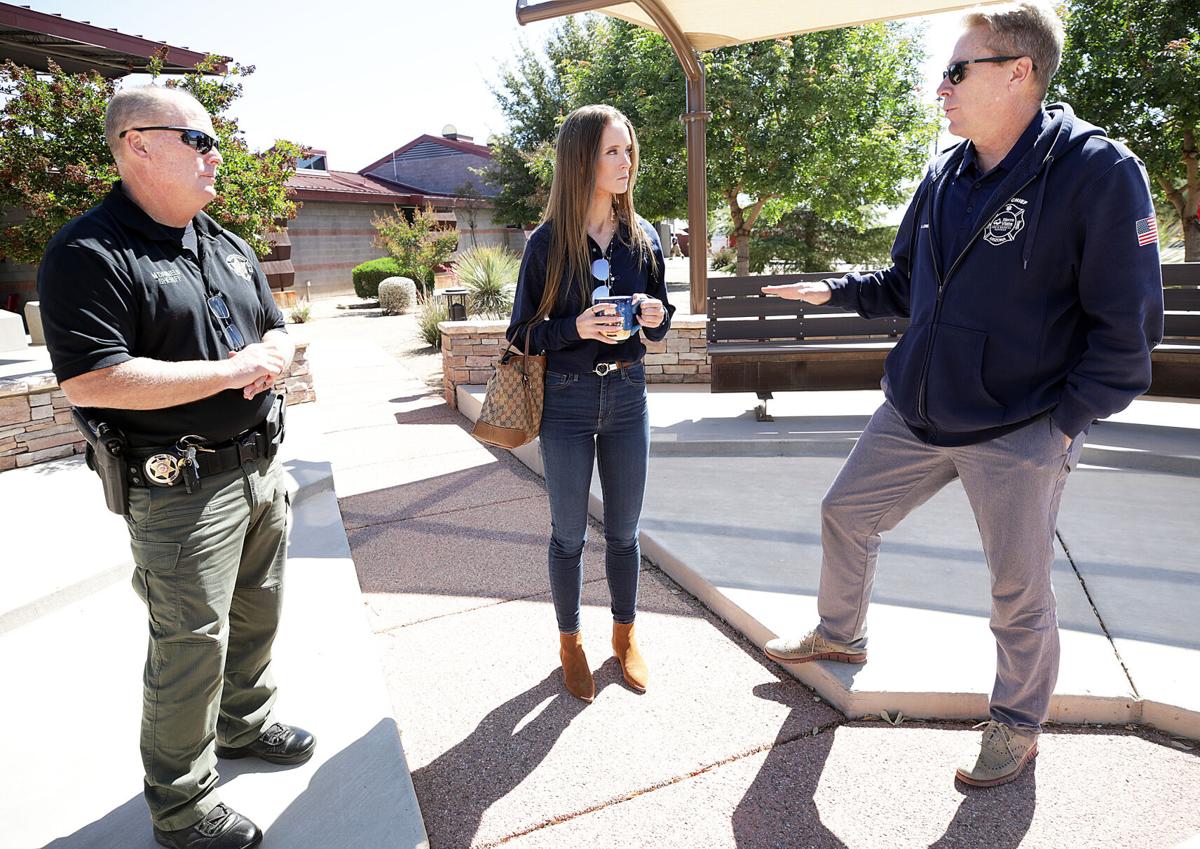 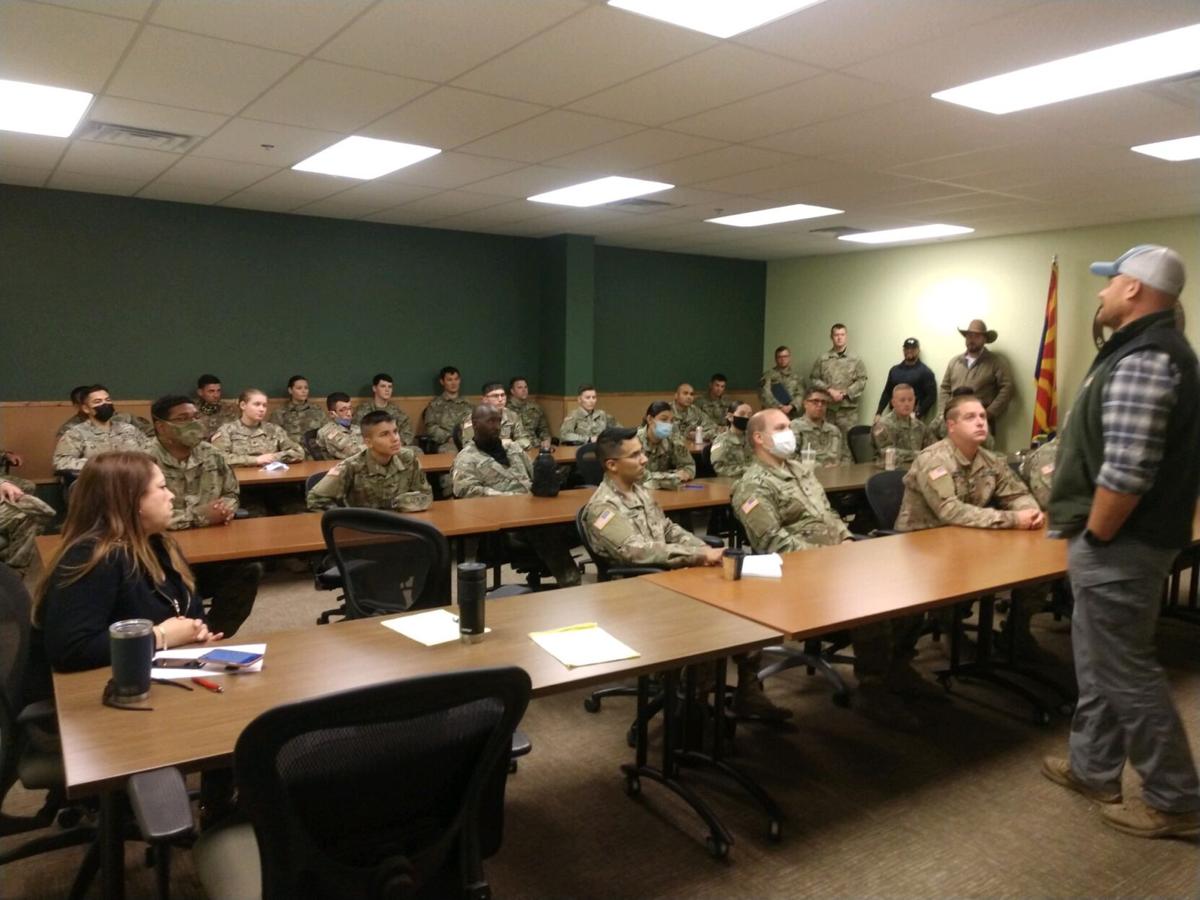 Cochise County Sheriff Mark Dannels talks with Megan Fitzgerald, public safety and military affairs policy advisor with the governor’s office, about border issues while they were in front of the Sierra Vista Fire and Medical Services Station 3 facility Friday.

Migrants are often captured crossing the border illegally by the many cameras the Cochise County Sheriff's Office has deployed along the international boundary.

COCHISE COUNTY — The Arizona National Guard has arrived to bring some much-needed assistance to the Cochise County Sheriff’s Office in their daily mission along the international border.

At least 32 members of the Guard were sent to help out in various non-law enforcement duties, with the majority assigned to the Sheriff’s Southeast Arizona Border Region Enforcement team.

Cochise County Sheriff Mark Dannels said Friday that 22 Guard members will be monitoring the Buckeye cameras that the Sheriff’s Office has along the border with Mexico. That’s a key function aimed at helping authorities hold back the number of illegal crossings into the area by undocumented migrants, Dannels said.

On April 16, Gov. Doug Ducey announced Arizona would take matters into its own hands regarding the onslaught of undocumented migrants pouring into the state. Ducey’s statement came after the Arizona Department of Public Safety spotted 20 undocumented migrants in Chandler that same day, but were rebuffed by both the Border Patrol and U.S. Immigration and Customs Enforcement when they asked for help. The migrants were released in Chandler.

“The Biden/Harris administration needs to get its head out of the sand when it comes to the crisis at our border,” Ducey said. “This lack of action defies all logic, and flies in the face of the law. This administration is asleep at the switch, and their total lack of action is having real consequences here in the state of Arizona.

“I’ve met with our Border Patrol and they need help, and they need the support of the administration. It’s time for the White House to act and do its job so the dedicated law enforcement officials on the ground have the resources, support and direction they desperately need.”

Thursday morning, the 32 National Guard troops sent to Cochise County were given their assignments during an orientation at the Sheriff’s Office in Bisbee, said Sheriff’s spokeswoman Carol Capas. They began their mission Friday.

Dannels, who was accompanied Friday by Megan Fitzgerald, Ducey’s policy advisor for public safety and military affairs, said his greatest need is making sure the cameras are being watched.

“Our system has grown so much and it’s so active right now, compared to what we were a year ago,” Dannels said about the cameras. “When we see images on the cameras, we have to communicate with the Border Patrol.”

In March, the cameras recorded images of just less than 3,500 undocumented migrants attempting to cross the border into Cochise County, he said.

Aside from the 22 National Guard assigned to watch the Buckeye cameras, the other 10 will be helping out at the jail with clerical work and other support functions.

Fitzgerald spoke on Dannels’ radio show Friday morning about the border situation. She acts as Ducey’s liaison with law enforcement and the military and lets him know what’s needed and by whom. She spent Friday speaking not only with Dannels, but with other law enforcement officials — such as Border Patrol — to determine what they need most from the governor’s office.

Her initial take on what she saw Friday on a tour with Dannels, as well as her visits to other areas such as Nogales, was, “Things are definitely escalating with the number of crossings and the demographics of the individuals who are crossing.”

Fitzgerald said Ducey had asked the federal government for support in deploying the National Guard — known as Title 32 — but that did not materialize. The governor decided to declare an emergency along Arizona’s four-border counties and deployed the National Guard under State Active Duty.

Dannels, meanwhile, who along with Ducey has repeatedly called on the Biden administration to visit the Southwest border, has been communicating regularly with Alejandro Mayorkas, the U.S. Secretary of Homeland Security. The sheriff and several other colleagues representing the National Sheriffs Association, the Western States Sheriffs Association and the Southwestern Border Sheriffs Coalition met with Mayorkas in El Paso earlier this month to discuss the situation.

The sheriff said Friday he asked Mayorkas to relay a message to both the president and the vice-president.

“One thing I asked is that he speak to the president and vice-president and ask them to change the messaging. The border is not open for illicit activity since it’s run by the cartel,” Dannels said. “We need to deal with messaging (that gets across) that there are actions and consequences.

“It’s frustrating because during the state of the union, Biden did not talk about border security. We have to address the cartels and we have to change the messaging.”

Dannels said he believes Mayorkas is doing everything he can to bring about a resolution: “It’s the only hope we have.”