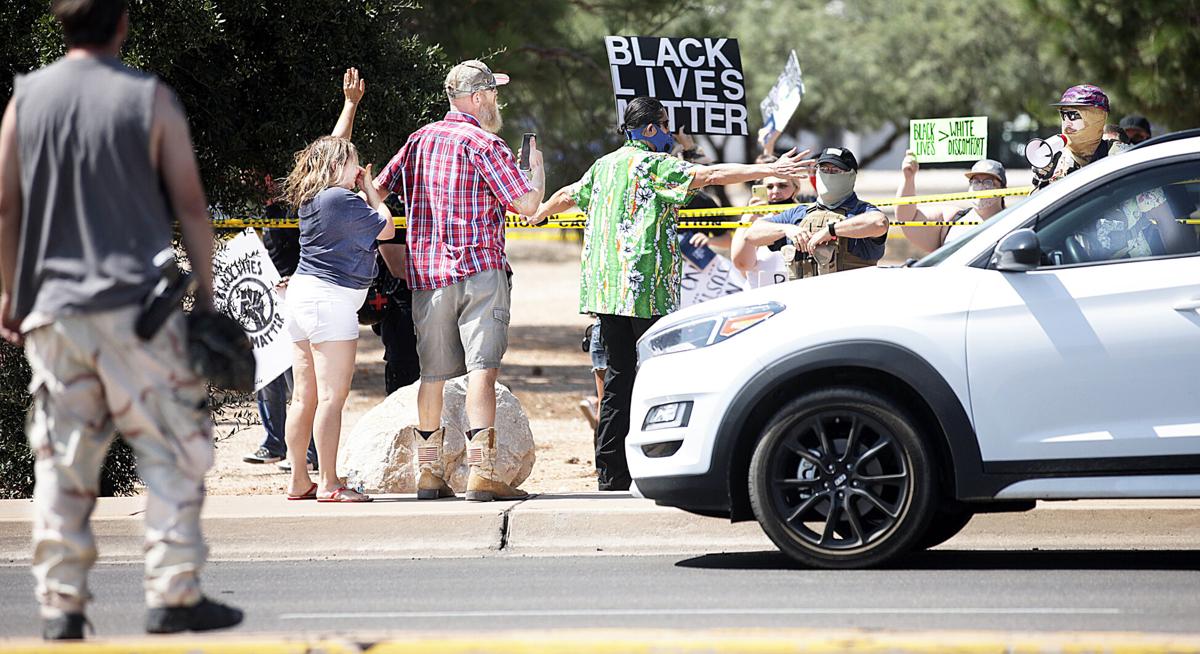 The participants of last week’s protest incident are pictured. Cathy Tashman, the woman who was sprayed, second from left, and her parked vehicle in a Highway 92 lane, with the man who sprayed her standing next to the car with bullhorn on the right. 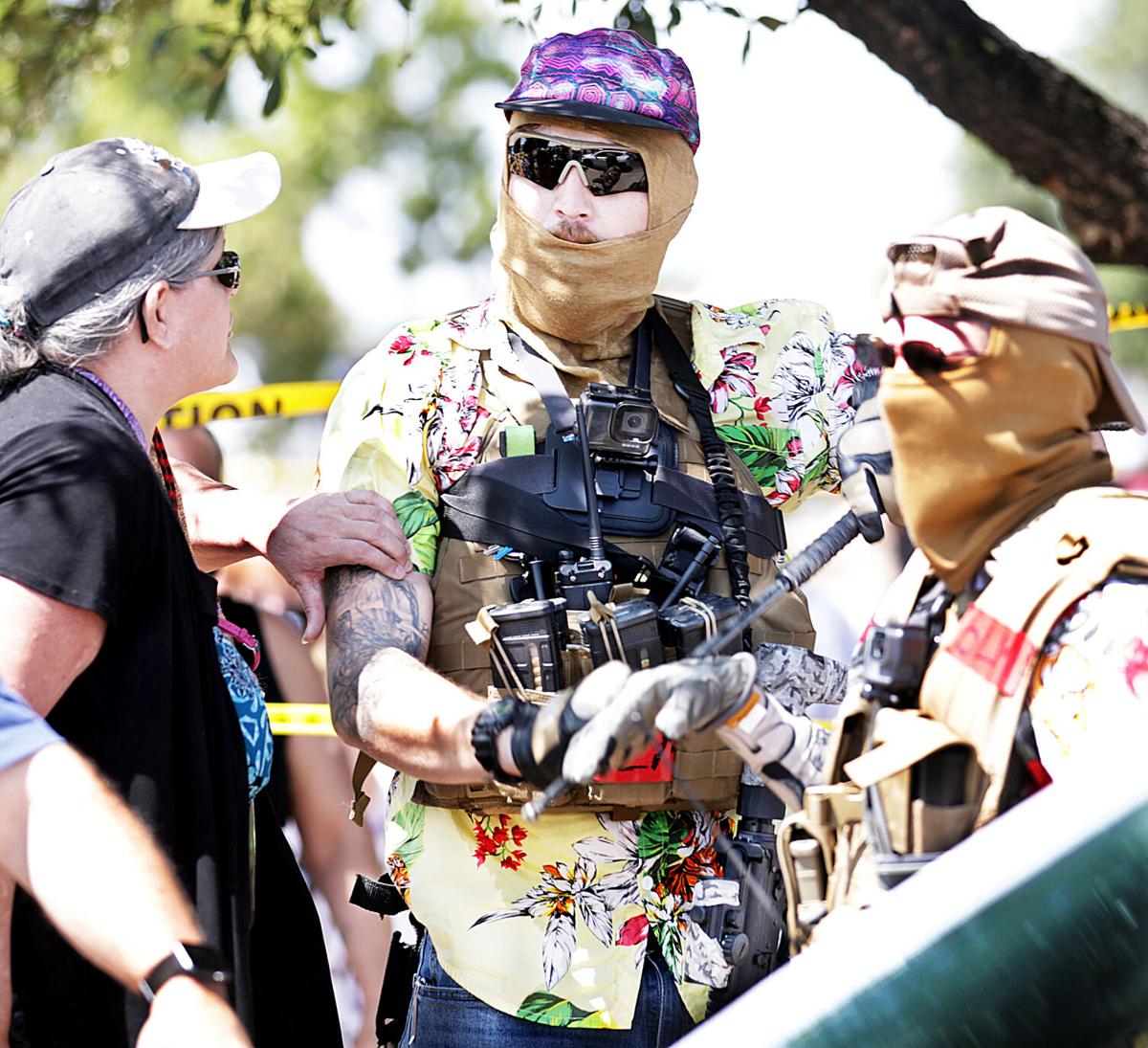 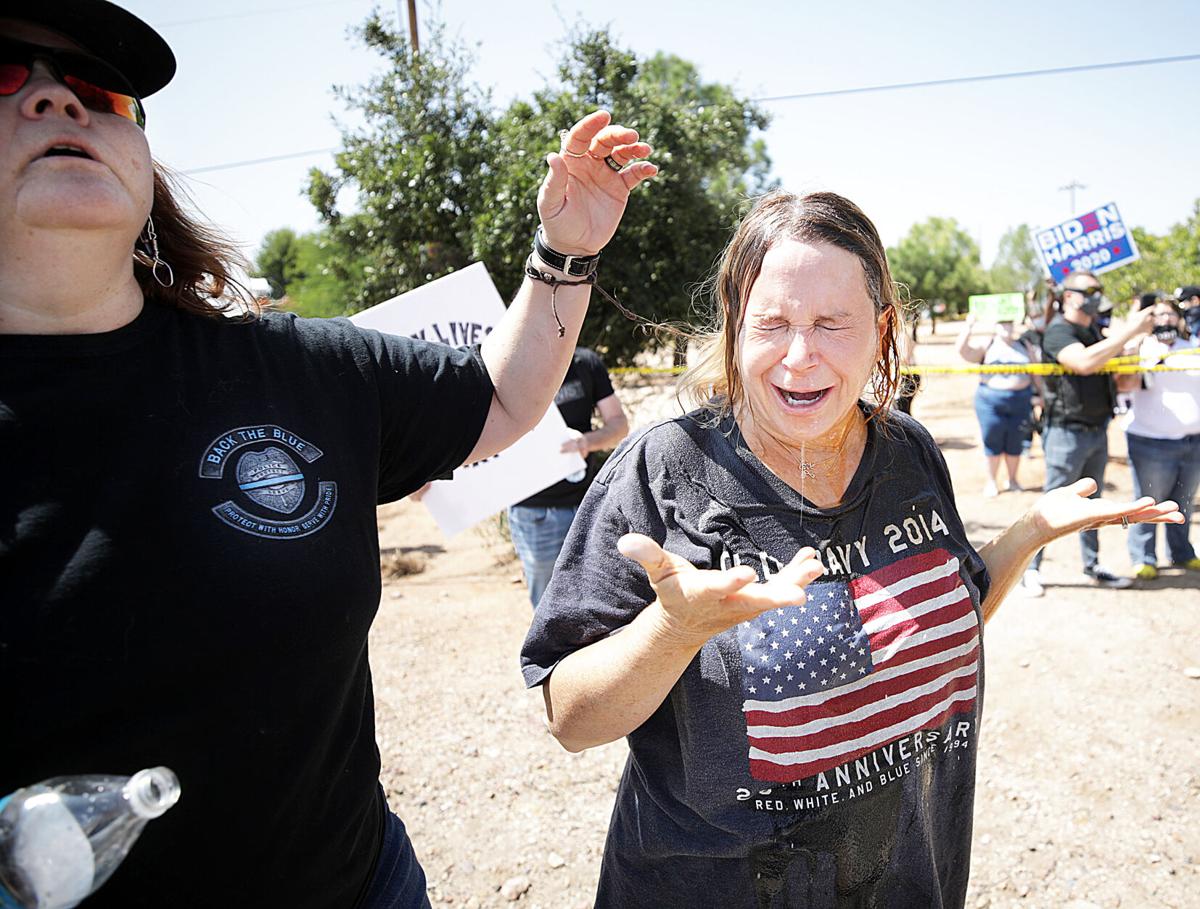 Cathy Tashman right after being sprayed. Bottled water was poured on Tashman's face to help wash away the spray. 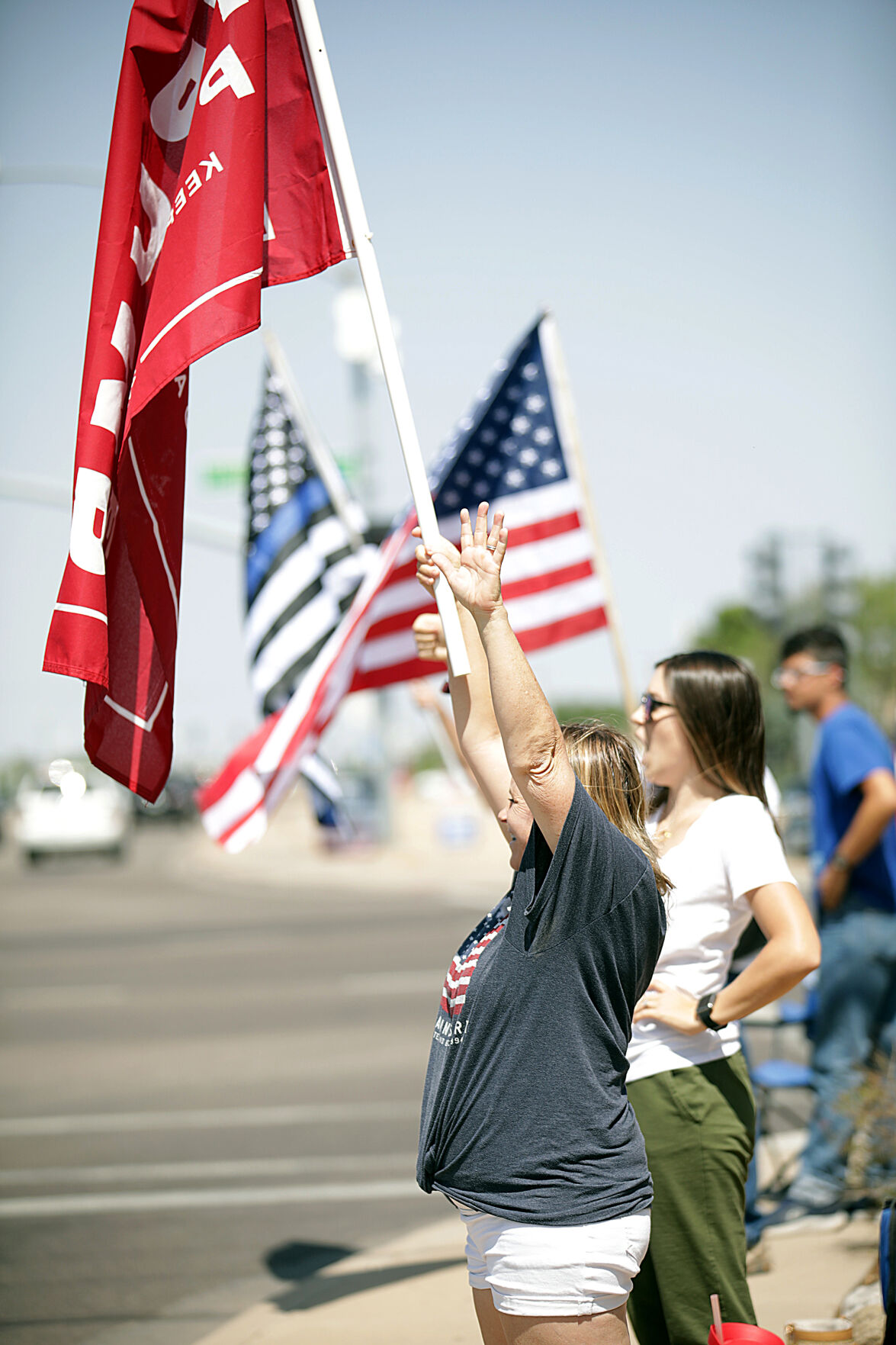 Cathy Tashman is seen protesting last week in Sierra Vista before the incident.

The participants of last week’s protest incident are pictured. Cathy Tashman, the woman who was sprayed, second from left, and her parked vehicle in a Highway 92 lane, with the man who sprayed her standing next to the car with bullhorn on the right.

Cathy Tashman right after being sprayed. Bottled water was poured on Tashman's face to help wash away the spray.

Cathy Tashman is seen protesting last week in Sierra Vista before the incident.

SIERRA VISTA — Police will be meeting with the Cochise County Attorney’s Office next week to determine whether criminal charges should be filed in the skirmish that erupted during a recent Black Lives Matter demonstration and a counter protest across the street in Sierra Vista.

A woman was pepper sprayed at the event by a man with the BLM group, Sierra Vista Police Chief Adam Thrasher told the Herald/Review.

“We’re still going through all the different statements and video,” Thrasher said Wednesday. “And we’re meeting with the county attorney next week (to determine if any charges should be filed).”

Videos posted on the internet show the moments when a counter protester, Cathy Tashman, advances toward a BLM protester dressed in a Hawaiian shirt with an assault weapon dangling from his vest.

After a brief confrontation, Tashman was pepper sprayed twice in the face, the videos show.

Tashman, a realtor, told the Herald/Review on Thursday that she was the woman who was pepper sprayed at the protest.

In the videos, Tashman is seen swatting at the man with her right arm, but it’s unclear from the footage whether she actually struck him.

What is clear is the blast of pepper spray from the can that hits Tashman in the face. When Tashman moves toward the man again, her arms flailing in front of her, he hits her with a second blast, videos show.

Organizers of the BLM demonstration said the man was a “security detail” for their event, which was supposed to be a peaceful one, said planner Destiny Capas.

She said before the protests, BLM supporters and members of the opposing demonstration — many of them members of the Concerned Citizens of Cochise County group — had agreed that they would keep the event civil as both demonstrated on opposing sides of the street.

But civility was short lived when Tashman, who had been demonstrating with the Concerned Citizens of Cochise County group, drove up in front of the BLM group. Police said she obstructed a lane of traffic on State Route 92.

The unidentified man in the Hawaiian shirt hurried over to the passenger’s side of Tashman’s SUV and with a bullhorn in one hand and a can of pepper spray in the other, began yelling at Tashman that she was “under arrest,” videos show.

Other BLM protesters approached the Hyundai as well, taking pictures with their cell phones.

“The fact that she came up in her car so abruptly is what scared us,” said BLM protester Kristiana Morgan of Sierra Vista. “We yelled at her to leave. Our security detail went up to her because he saw this as a hostile thing.”

Dressed in white shorts and a gray T-shirt with an American flag on the front, Tashman exited her vehicle and stood in front of the demonstrators smiling and raising her arms. She mocked the security officials who kept telling her she was under arrest.

Tashman then noticed a videographer recording the incident. Videos show her walking toward that person and putting out her hand to block the camera, screaming, “No videoing!”

That’s when the man in the Hawaiian shirt, identified by Morgan and protest organizer Capas as security for the BLM group, put out his arm to block Tashman from the videographer.

The videographer, identified by Capas as Alison McLeod, yelled out, “Don’t touch me!”

At that point Tashman began facing traffic and yelling. It’s not clear if she was addressing the other protesters assembled across the street, or passersby.

The exchange between Tashman and the protester with the pepper spray ensued afterward.

When Sierra Vista officers who were standing nearby saw Tashman’s SUV in the busy roadway, they headed in that direction but could not get there quickly enough to prevent the pepper spraying, Thrasher said.

“We had officers watching at a distance,” Thrasher said. “As soon as she stopped (the car) we couldn’t get there fast enough.”

Thrasher said the woman’s actions were unusual. He did not identify her as Tashman.

Once Tashman was pepper sprayed, a man from the opposing demonstration across the street ran over and shielded her as she rubbed her face and eyes. The man, Daniel Webster, also began yelling at the BLM protesters. Three other men from the Cochise County Concerned Citizens group crossed the street and joined him.

The Herald/Review left a telephone message for Webster, identified on social media as a member of the Cochise County Concerned Citizens and a possible organizer of their counter demonstration. Webster returned a call to the Herald/Review, but when a reporter called him back, he did not answer.

Tashman declined comment for this article on Thursday afternoon, even though she spoke out about the ordeal on a talk radio program in Tucson earlier in the day. Her husband told the Herald/Review that her attorney recommended against commenting any further because the incident is under investigation.