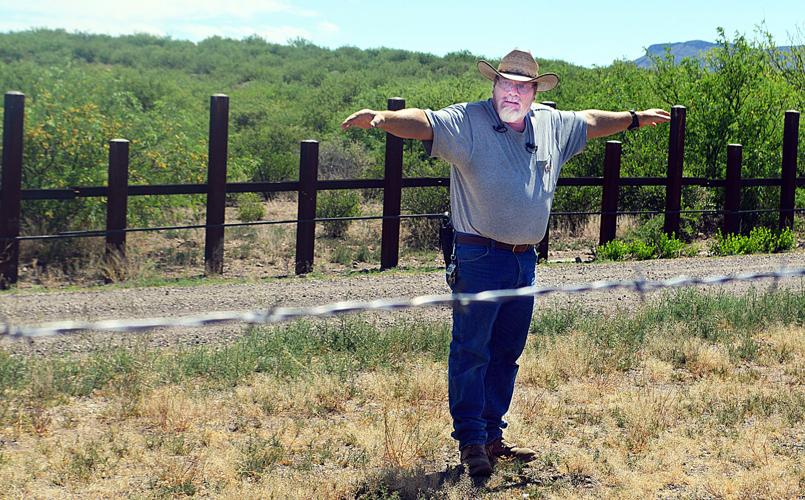 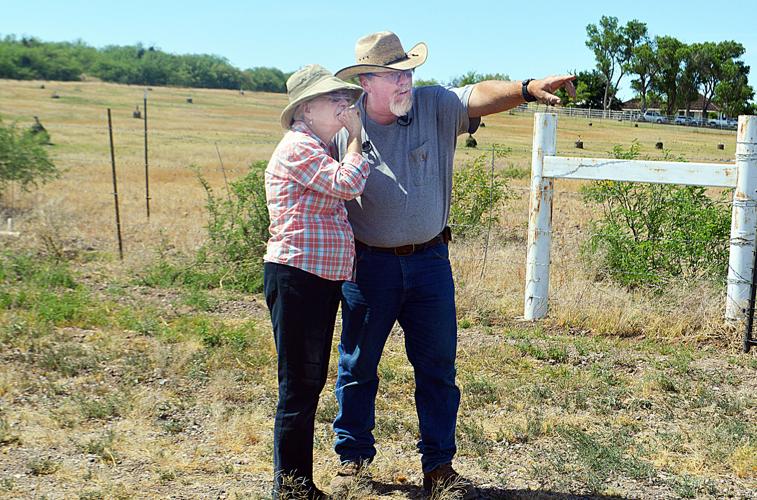 Diana Hadley, president of the Northern Jaguar Project, and Dunn discuss the border wall on Slaughter Ranch in Douglas. 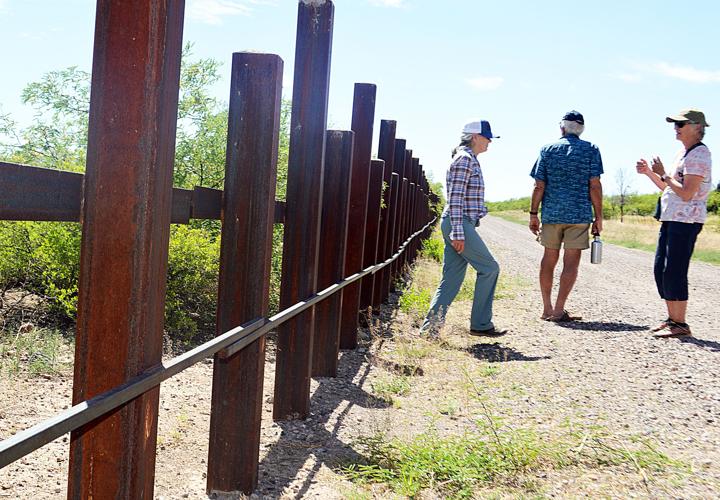 Members of the Great Old Broads for Wilderness, a national conservation organization based in Colorado, tour the border on Slaughter Ranch.

Diana Hadley, president of the Northern Jaguar Project, and Dunn discuss the border wall on Slaughter Ranch in Douglas.

Members of the Great Old Broads for Wilderness, a national conservation organization based in Colorado, tour the border on Slaughter Ranch.

DOUGLAS — Many residents living along the U.S./Mexico border on the outskirts of Douglas have spotted wildlife most of us could only hope to see on a nature special: a mountain lion napping in the shade of a cottonwood just steps from a ranch house, or a rare, shy, tigrillo cat creeping through the shadows near a trickling spring.

Drainage from the Río Yaqui, the largest river system in the state of Sonora, Mexico, is what draws such creatures to the ranches and refuges straddling the border in Southeastern Cochise County. Its headwaters sit near the San Bernardino Refuge, just over 2,000 acres of protected land that is home to hundreds of resident and migratory animal and insects. Dozens of those species are listed as federally endangered or threatened, or as “species of concern.”

There is now a new reason for area residents to be concerned for the future of the local wildlife: the Department of Homeland Security has marked about 20 miles of vehicle barrier fencing, which cuts through the San Bernardino Refuge and surrounding properties, to be replaced by a pedestrian wall, according to a February 2019 DHS document posted and summarized by the Sierra Club. A quarter-mile segment across the San Pedro River near Palominas, as well as a quarter-mile in the Coronado National Memorial in Hereford, are also included on the list.

Some ranchers and conservationists worry that the proposed construction could turn away or harm the animals that currently move freely over the border’s low, open vehicle barrier.

“We have many species that are on both sides of the border and that really need to be genetically connected, and the wall would prevent that completely,” said Diana Hadley, president of the Northern Jaguar Project, who owns a ranch near Guadalupe Canyon outside of Douglas.

Pronghorn antelope, big horned sheep, and possibly jaguars are just some of the species that migrate between the two countries, she said.

The impacts of such pedestrian walls on large mammals have already been documented in urban border areas, Hadley continued.

“We’ve got a few pictures of mountain lions that were taken by the Border Patrol over in Naco, and the agents figured that the cubs had gotten through the six-inch spaces, and the mother was absolutely beside herself trying to get together with cubs . . . there is another set of photographs that the Border Patrol took of a bear on top of the wall,” she said, adding that the concertina wire installed earlier this year along segments of the wall was also a concern. “That’s new, but anything that comes down on this side gets ripped to pieces.”

While the DHS document did not specify the exact dimensions or materials of the proposed border wall, possible prototypes listed on the Customs and Border Protection website range from 18 to 30 feet tall, some made of solid concrete.

The designs are “not acceptable” for wildlife, said Fred Dunn, manager of Slaughter Ranch in Douglas. The ranch borders the San Bernardino Refuge, which Dunn works with to protect the animal species that live on the Slaughter Ranch property.

“It doesn’t allow for wildlife crossing, so when it gets down to the physical wall coming in, I’m probably going to make a whole lot of noise,” said Dunn at the ranch last week, speaking to a group of men and women from national conservation organization Great Old Broads for Wilderness, who were touring the border. “I’m usually a very quiet person, but when it comes to the animals, I’ll get ugly real quick.”

Dunn said DHS representatives had informed him that the stretch of the border in the Douglas area was currently listed as section 4, or last priority, for construction. Officials couldn’t tell him when building would begin, but Dunn hopes that before boots hit the ground, they would recognize the current effectiveness of the sensors, drones, agents, and vehicle barriers in warding off illegal activity in the remote area, he said.

“They informed us that when they get to us, they’re going to cut 80 feet,” said Dunn, gesturing to the low vehicle barrier, with an access road running alongside it, just beyond his paddocks. “Cutting 80 feet off the ranch and off the refuge, that upsets me. I don’t want to give any more than I’ve already given.”

In the neighboring San Bernardino Refuge, manager Bill Radke said that not enough is known about the proposed wall construction to properly assess its impacts on the land’s ecosystems and wildlife. Frequent illegal traffic, pedestrian or vehicular, can also be detrimental to the environment, he pointed out.

“Barriers can be helpful or they can be harmful, depending on how they are constructed,” he said. “(The vehicle barrier) has been hugely effective in lowering the amount of drugs and illegal immigrants that come through, so it’s had a lot of positive impact.”

Effectively protecting species along the international border requires cooperation and partnerships with different government agencies and private landowners, he continued.

“There’s pros and cons, and the truth is, no matter what policy the government agrees upon, there’s positive and negative impacts,” he said. “The way to make that work effectively is to really communicate openly with everyone involved . . . border security and species preservation are not mutually exclusive missions.”

Water in the Desert

Several miles away at the Cuenca Los Ojos (“watershed of springs”) Foundation, a collection of protected lands spanning 45,000 acres across the U.S. and Mexico, foundation president Valer Clark is also waiting to see what happens on the border, with some trepidation.

Clark has been working for four decades to restore habitats in the region by constructing gabions, or rock-filled wire cages, across the acreage in order to slow and redistribute the flow of water underground. The result has been lush, revitalized lands to which wildlife flocks.

“Just in cats, the cameras have picked up ocelots, the jaguar, the mountain lion, bobcats. I saw a margay cat, which is a very southernmost cat called a tigrillo, about 10, 15 years ago,” said Clark. “Every once in a while you see something out of range . . . but it’s been coming through us.”

The construction of a high, solid border wall, with bright, disorienting lights would certainly deter animals from moving across the adjoining lands, even the smaller creatures that climb or fly, she said. She also doubts that DHS has thoroughly considered the effects such a wall would have on the area’s water flows — or the water flows’ effects on the wall, she said.

“What happens is it’ll catch debris, so that’ll be like a gabion — so then they have to come and take the wall down every once in awhile to let the water flow through,” said Clark, who has seen the same thing happen with the vehicle barrier currently in place. “ . . . When the water comes now, it hits us underneath, so it’s pooling the water underneath, plus it’s capturing the sediment up here. So now they’re helping, but they don’t realize it.”

Bringing groups like the Great Old Broads for Wilderness, comprised of members from throughout the country, down to the border is key to educating people about the reality of the region’s wildlife and people, said Hadley.

“I want them to get a better picture of what life on the border is actually like,” she said. “I’m hoping that they will spread this to other parts of the country, where the press has not represented the actuality of the border town or a border ranch or a border situation in very realistic terms.”

The trip to Cochise County was eye-opening for the group, many of whom had only seen the border as it is depicted in national news, said Great Old Broads associate director Lauren Berutich.

“Something like this massive, invasive wall development is that it impacts everybody — I don’t think this has to be a political issue, I think it has to be a quality-of-life issue,” she said. “And a major, fundamental piece to this work is hearing from the people who are most impacted, and who are involved on any side of the issue.”

For Hadley, she hopes awareness-raising groups like Great Old Broads will help more people across the country to recognize an aspect of the borderlands rarely depicted in the media: that of a binational community working to support a wealth of unique wildlife and habitats.

“I don’t think that the environmental impacts of border-walling, and particularly the impacts of the presence of a wall on a whole different variety of species, has even been written about very much on the place,” she said.

With many iconic borderland species relying on being able to migrate back and forth between countries, she said, erecting a border wall across remote or protected areas would result in a loss for Arizona.

“(They’ll) turn around and go away,” she said simply.

Want to learn more about borderland wildlife? Check out these websites