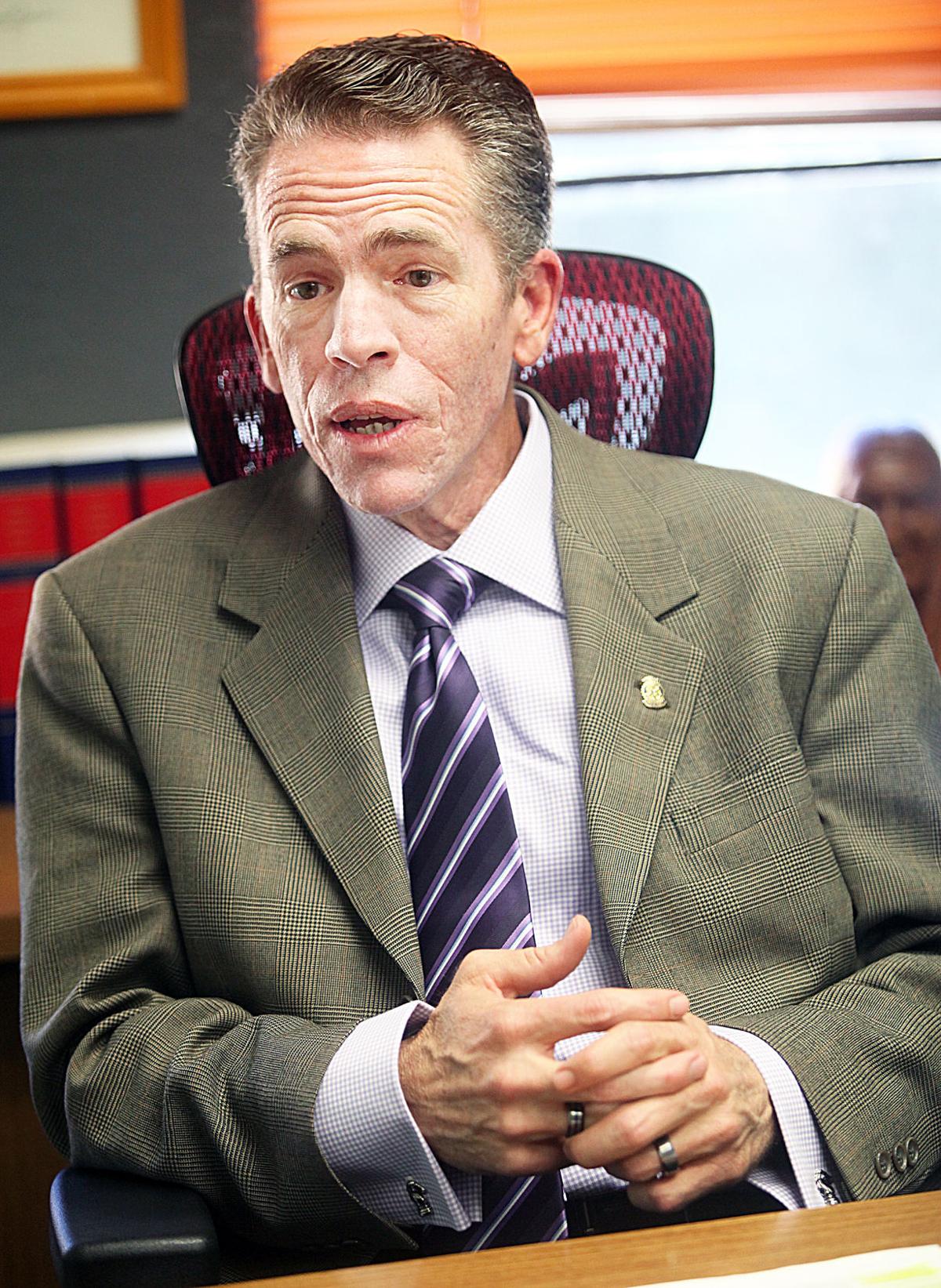 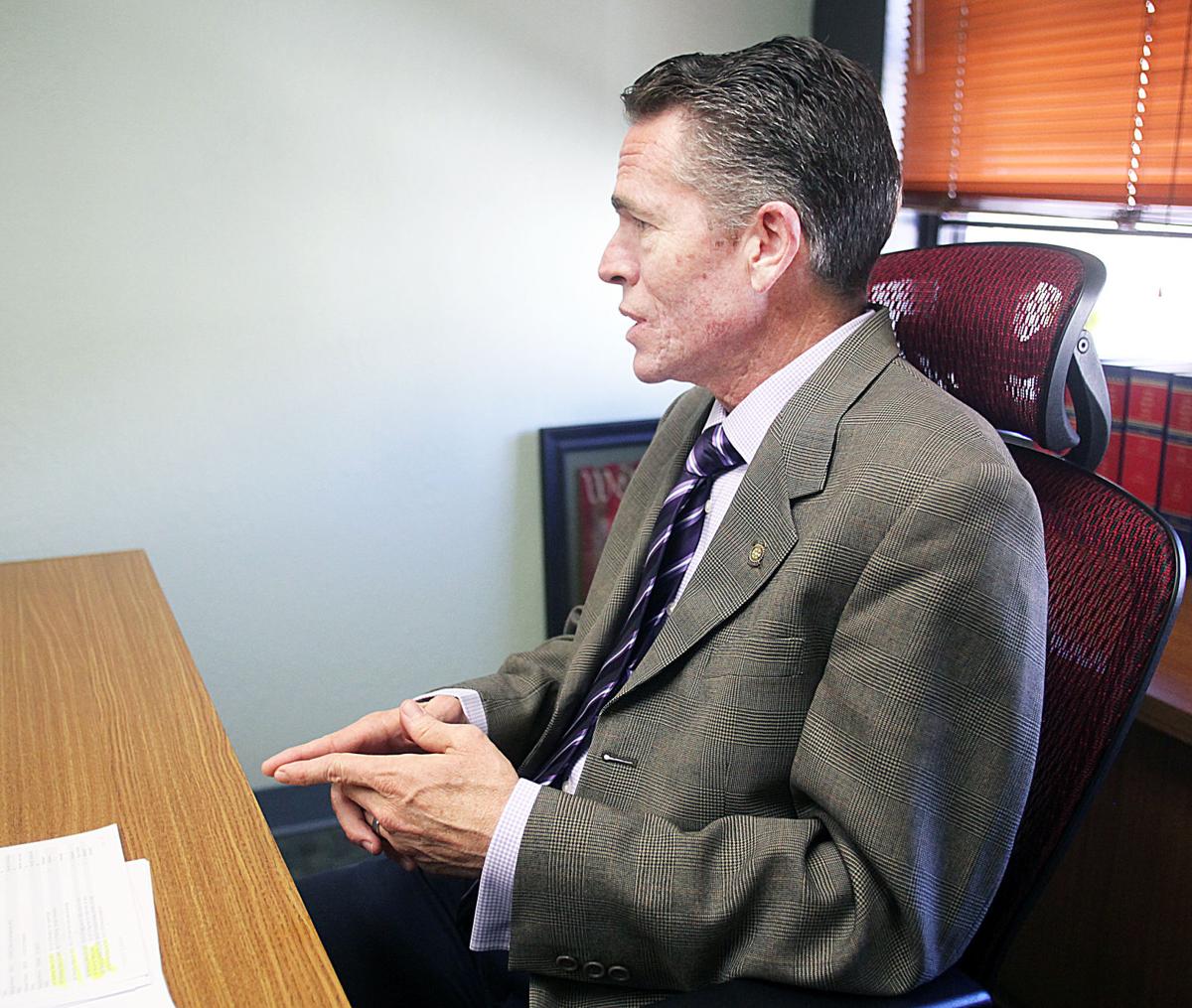 County Attorney Brian McIntyre has been an attorney for over 21 years.

County Attorney Brian McIntyre has been an attorney for over 21 years.

BISBEE — As the old adage goes, when life gives you lemons, make lemonade. While that may suffice for many, the unique make lemon meringue pie.

Cochise County Attorney Brian McIntyre was not the lemonade type. He dreamed big and was on the cusp of achieving his dream as a fighter pilot. The Douglas native went to Arizona State University on an Air Force scholarship and graduated with a major in computer science. He was ready.

Then a major accident caused him great harm and resulted in a loss of vision. His name was dropped from the pilot’s slot.

Though a disappointment, another avenue he thought of pursuing was the exciting career as an agent for Federal Bureau of Investigation. A professor told him he could come out of law school and start as an agent without having to go through the years-long, tag-a-long requirement to reach agent status.

“That would be pretty cool,” he smiled.

So, he went into law studies at Tulane University and graduated. However, that accident earlier in his life also blew up his chances of having a career with the FBI.

“But, I found law very interesting,” he said. “It was insanely competitive. Most people in law school are driven by money; others just become professors with a steady income and pension.”

For a while he worked for the City of New Orleans on cases to release older prisoners who had served time and had health issues.

“To me, it seemed the prosecutors had the most influence in the legal system,” he said. “I wanted to help people.”

When his mother became ill, he moved back to Cochise County.

Working in the civil division of the County Attorney’s Office renewed his intent to work one-on-one with the defendants.

He felt he could do something to help those “who did something wrong that brought them to the attention of law enforcement. What the system needs is people who respect each other as human beings to change the outcome. I felt like I was providing a service to these people who got into trouble. ”

“I love being a prosecutor. The community means so much to me, because I was raised here. Raised my kids here, ” he continued.

“It’s not for everyone. Someone’s whole life and their families has forever been effected by what was done,” he said. “We can make that better. My goal is to make the county the safest place to rear children and live their lives. That’s what I want to do.”

These days, some 70 percent of non-felony cases are determined through waivers in early resolution court where the state extends an offer to an offender to decrease or eliminate jail time, but carries probation requirements which can include appoiuntments with behavioral health professionals.

To get offenders the help they need, he recently requested the county hire a behavioral health specialist who can counsel a probationer and provide the help he or she needs. The supervisors approved his request.

Herald/Review: Can you explain how the GRACE program will help the targeted population?

Brian McIntyre: Imagine if your bank moved every three months, or changed its corporate name and logo. You’d feel confused and probably start looking for a new bank. Unfortunately, for people with mental health issues, this is a very real issue. The treatment provider network constantly changes because of contract issues or corporate changes. The targeted population needs assistance with navigating all of these changes and needs someone holding them accountable for remaining connected. The goal of GRACE is to get people connected with services and keep them connected. If they remain in treatment, remain crime free and pay restitution if applicable, their criminal cases will be dismissed.

HR: How did you become aware of it?

BM: Thankfully, I work with an amazing group of people who come up with some great ideas. After many, many discussions about how best to approach the issue, we developed the program. All of us were already well aware of the cost/resource issues that this population poses in the criminal justice system.

HR: Now that you have approval for the new position, how soon do you hope to have it filled? Do you think the salary is appropriate?

BM: We are hoping to have the position filled very early in January. The salary is set at a level commensurate with the responsibilities of the position.

HR: When this new person gets hired, how many cases will he or she have to deal with?

BM: We presently have nine individuals in the program. I believe that we can expect to see as many as 20 people in at one time. With one person dedicated full time to monitoring their progress and ensuring they remain engaged, we hope to succeed in helping them achieve meaningful life changes.

HR: Have there been other programs tried in the past to help these people? Results?

BM: In the county, we have a mix of programs outside of the criminal justice system that assist the mentally ill. In the criminal justice system itself, unfortunately, the treatment provided specifically focuses on getting them competent enough to stand trial or accept a plea. As a result, unsurprisingly, there has not been much assistance provided after the court process.

HR: Have you noticed an increase in domestic violence (DV) cases? Is the abuse often tied to drug addiction, mental issues?

BM: I can’t say that I have seen an increase. I will say that we have increased the occasions when we file DV as a felony, partially assisted by a change in state law regarding choking. Addiction or substance abuse issues are, quite frankly, present in almost all of our cases.

HR: Is help offered to victims as well as abusers?

BM: Our office has victim advocates to assist with the court process and connecting to treatment providers for victims. Additionally, we have a Victim Compensation board that can assist.

HR: What crimes are the most common in the county?

BM: In felony, we have roughly a 50/50 breakdown between drug cases and “general” crimes. So, it is a little hard to say what is the most common.

HR: How do you assign prosecutors to cases?

BM: In the felony unit, we now use vertical prosecution. Typically, the prosecutor is assigned on a rotating basis, absent some special considerations in the case.

HR: How do you keep track of all the cases pursued by the prosecutors? Daily/weekly briefings?

BM: Honestly, I can’t possibly “keep track” of every case. We file roughly 1,000 felony cases a year. We have a weekly attorney meeting in the felony unit to discuss issues and my door is always open for prosecutors to discuss pending cases or cases under review. Obviously, I monitor the progress of high-profile cases more closely.

HR: Tell us a bit about yourself?

BM: I was born and raised in Douglas. My father was a high school history teacher and my mother had many jobs to include working at the prison full time and dealing with my brother, my sister and me full time.

I have two wonderful children who are both off at college now; thankfully, neither is currently planning on being a lawyer.

My wife and I enjoy our spending time together at home, especially now that we have no teenagers to attend to. My wife got me hooked on pocket billiards, aka pool. So, in my free time, I am a very amateur pool player. I participate in a traveling team that is heading to the State Championships in January and then World Championships in March. We’re all just regular guys with day jobs who wish we could make a living playing pool.