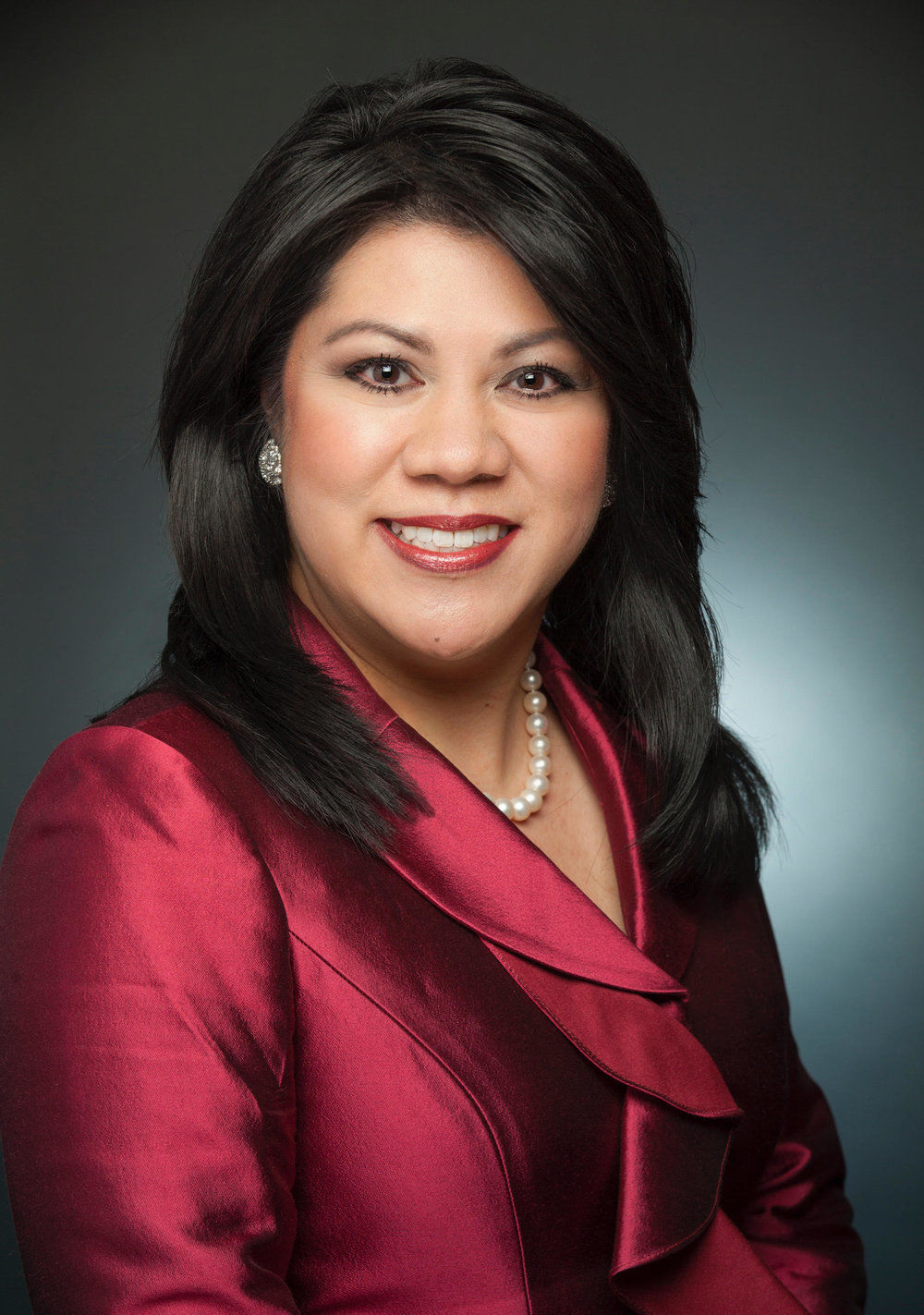 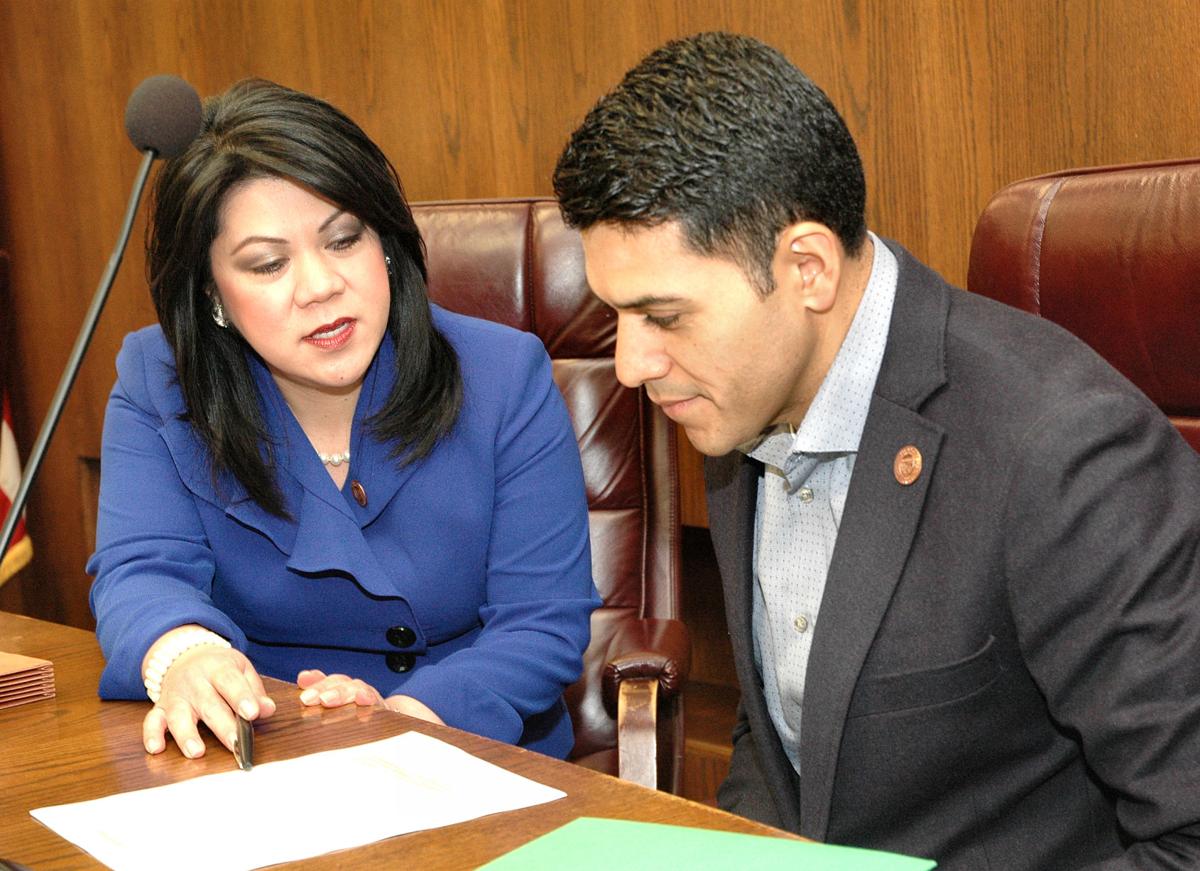 State Treasurer Kimberly Yee, who chaired the Senate Ethics Committee as a state senator, goes over some notes with fellow Republican Sen. Steve Montenegro in 2017.

State Treasurer Kimberly Yee, who chaired the Senate Ethics Committee as a state senator, goes over some notes with fellow Republican Sen. Steve Montenegro in 2017.

Arizona Treasurer Kimberly Yee, who was elected last year and took over the office in January, has been traveling all over the state, saying she intends to meet with leaders from each of Arizona’s 15 counties and various municipalities.

The treasurer, 45, who served as both a state House representative and state senator from 2011 through 2018, was born in Phoenix and has lived in Arizona most of her life.

She got her bachelor’s degree from Pepperdine University near Malibu, California, and a master’s degree in public administration from Arizona State University.

In California, Yee worked for then-governors Pete Wilson and Arnold Schwarzenegger before returning to Arizona.

As part of her statewide tour, Yee visited Sierra Vista last week to meet with city and county officials. While she was in town, Yee sat down with the Herald/Review.

Herald/Review: How has your first year in the treasurer’s office been going?

Kimberly Yee: We’ve had some great markers that we’ve made. It’s now been 10 months that I’ve been in office — I have returned back to the office, I used to work in the state treasurer’s office as a staff member 12 years prior under Dean Martin when he was the treasurer.

We have kept really great individuals who have maintained our investments. We have a number of staff members who have been there 27 to 30-some years. We have a really great family that we have in the treasurer’s office maintaining really good performance for the taxpayers of Arizona.

One of the things we wanted to do right away, I’ve been passionate about financial education, so financial literacy for children and making sure that they understand the simple life skills of managing their own money.

The bill itself was the education bill, and that was Senate Bill 1184. It was a bill we put forward from our office and it went through the Senate and the House with great bipartisan support. It was fantastic. What it did was require high school students who are taking their semester of economics to also have in that course personal financial education. And this would require them to understand the basics about managing their checkbook, understanding what it means to have a credit card, the consequences of carrying debt, and just simple things that, unfortunately, kids were missing because there was no requirement. If kids do get a taste of this type of curriculum, it’s an elective. And we know kids don’t take these electives willingly. So we were missing a lot of students.

And so, young students who graduate from high school who don’t have the basics of how they manage their money become adults who don’t manage their money. And then we have the state’s fiscal health at that point we need to be concerned about. So I thought, ‘Let’s press forward with this.’ I tried multiple avenues in the House and the Senate when I served in the Legislature for eight years, and we got some good things done during that time. One of the things I did as a House member was make sure our state standards have a strand for every grade level. So even kindergartners, the bill that I introduced when I was in the Legislature required even a kindergartner to learn even just a simple skill like what having a piggy bank means.

But there was no requirement to it, and I really wanted to get done at some point something where they’re going to be sitting in class with their attention on the topic before they get into the real world. And so this is what got that done. It’s now state law. This is the first semester that this is being implemented in our schools. And so by this next spring, you’ll see that for the first time in economics courses you’ll have personal financial education.

HR: How will you measure the success of that?

KY: It was a local school board decision. They were at the table for the discussion, and they wanted to have flexibility. So, in Arizona, we call it a local-control state, because we have independently elected school boards across the state. And they feel the importance of determining how they test, how much they test, how much they teach. And so, we did not create in the bill a requirement that, this is how much econ you have in that semester and this is how much personal finance. They’ll make that decision on their own, independently, at the local school board level, in addition to how they assess. So, they can say ‘at the end of the semester, you pass the test, and here’s the test.’ So we would love to, at some point, have an even broader way that we can say, ‘This is what you test, and this is what we’re going to make sure you have on the test.’

But for now, this is a start. The (Financial Literacy) Task Force, as you mentioned, is the continuing conversation about what’s next. Because, if you think about it, I was only on the job for two weeks when we put forward this bill. And this is what we had, it was really a step in, because for eight years (previously in the House) I tried, but there were some at the table who said, ‘There’s too much on our plate.’ But, because they have seen the results — the results are that millenials 18 to 34 are not paying their bills on time. And 39 percent of young millennial women say that it’s not important for them to pay their bills on time. And there’s a $1.6 trillion student debt problem in the country. And that rose, just during my administration alone, from $1.5 trillion. So, I started the year and it was at $1.5 trillion and by the end of the legislative session, it was at $1.6 trillion of student debt. That’s a problem, and this is something that we wanted to touch on right away in the administration. It was successful and now we’re moving forward.

What we see next in the task force, I’ve appointed, there’s 17 of us who sit around the table who are from all parts of the state and different constituencies. I have someone from the military — he’s a hall-of-fame veteran — and he’s going to help us get into communities where we have veterans, where there’s military families, and those who are on fixed-income budgets and get the message out to them on how they can, you know, have tips on how to manage their money better. We also have those who represent senior communities, and those who are from vulnerable populations. There are those who come from domestic violence situations and they’re just trying to get on their feet (financially), much less manage their families as a single parent. So, those are families we want to hit and get this information to. The others are what I like to call ‘emerging adults,’ those who have left the K-12 education system and are newly now into paying bills for the first time on their own. They have a job for the first time and we want to get them financially healthy, so they don’t go into a spiral of debt, and that can happen very quickly.

Particularly in this millennial age group, we see that they are a transient population and aren’t staying in one place for a long time, and they also aren’t buying homes. They’re more interested in the apartments, because they can move very quickly from there.

And so, it’s an interesting dialogue at the table. What we’ve come up with in the two meetings this year is that we really feel a need to have one central location for resources, and we don’t have that in the state. So my office will be working toward an effort to put free-of-cost resources — tips that people can use — in all of these categories, whether you are a military family, whether you are a single parent, a senior citizen, all of these individuals can find these resources very soon on our website. We want to make it available and very easy to use.

And that goes back into the rural communities in Arizona, urban communities. Wherever they are coming from to invest their dollars, it goes right back to their local government. And that means more for education, more for transportation, more for infrastructure.

We just met with the Cochise County treasurer, and she couldn’t thank (Yee and her staff) enough for just even the several thousand dollars that they are getting every quarter just from investments alone from our office. And we already have the operation in place, because we are obligated for state agency investments.

So, this is already a service in place for local governments, and they find it to be very resourceful and one that they’re finding the performance is top-notch. We rank among the highest in the country for some of the pools that we manage.

We also invest dollars for the state land trust fund. There are state lands across the state and anytime those are sold by the State Land Department, we invest the proceeds of the sales and that immediately goes to the beneficiaries.

There are 13 beneficiaries that are named in the state constitution, and K-12 education is the largest of the beneficiaries. What that means, for instance, the state land sales from last year, we invested those funds and in Fiscal Year 2020 we will be distributing $342 million for K-12 education, just based on the proceeds from land sales alone.

It’s money that goes right back to the K-12 education system. They decide how to use it. Similarly to the legislative appropriations, they (distribute the money) based on headcount and attendance. So, a school district, we don’t know how they’re going to use it, we don’t tell them how to use it …

HR: So there are no restrictions on how they can spend the funds?

KY: There’s not. Sometimes I say ‘unfortunately,’ because we really want it to go to the students. We want to keep it in the classroom, obviously. The school districts determine how they use those funds once it leaves our office, similarly to the legislative appropriations.

But anyway, $342 million is being distributed to schools this fiscal year, just from land sales alone. We’ve hit record numbers in our office for investments. For example, interest earnings in our office was at 49.5 percent — that’s a record number that we’ve hit, (measured) year over year.

And we are also, on June 25 of this year, our operating balance was at $3.75 billion. That’s a state record. The state’s bank account has never hit that number in the state’s history, which means that our economy is strong, it means that people have jobs and people are spending money.

The forecast from our office, we believe, based on the numbers we’re seeing in our office where the money is coming in at record numbers and hitting state history markers, it means our economy is strong.

So, while other states might be struggling economically, Arizona is not in that same boat.