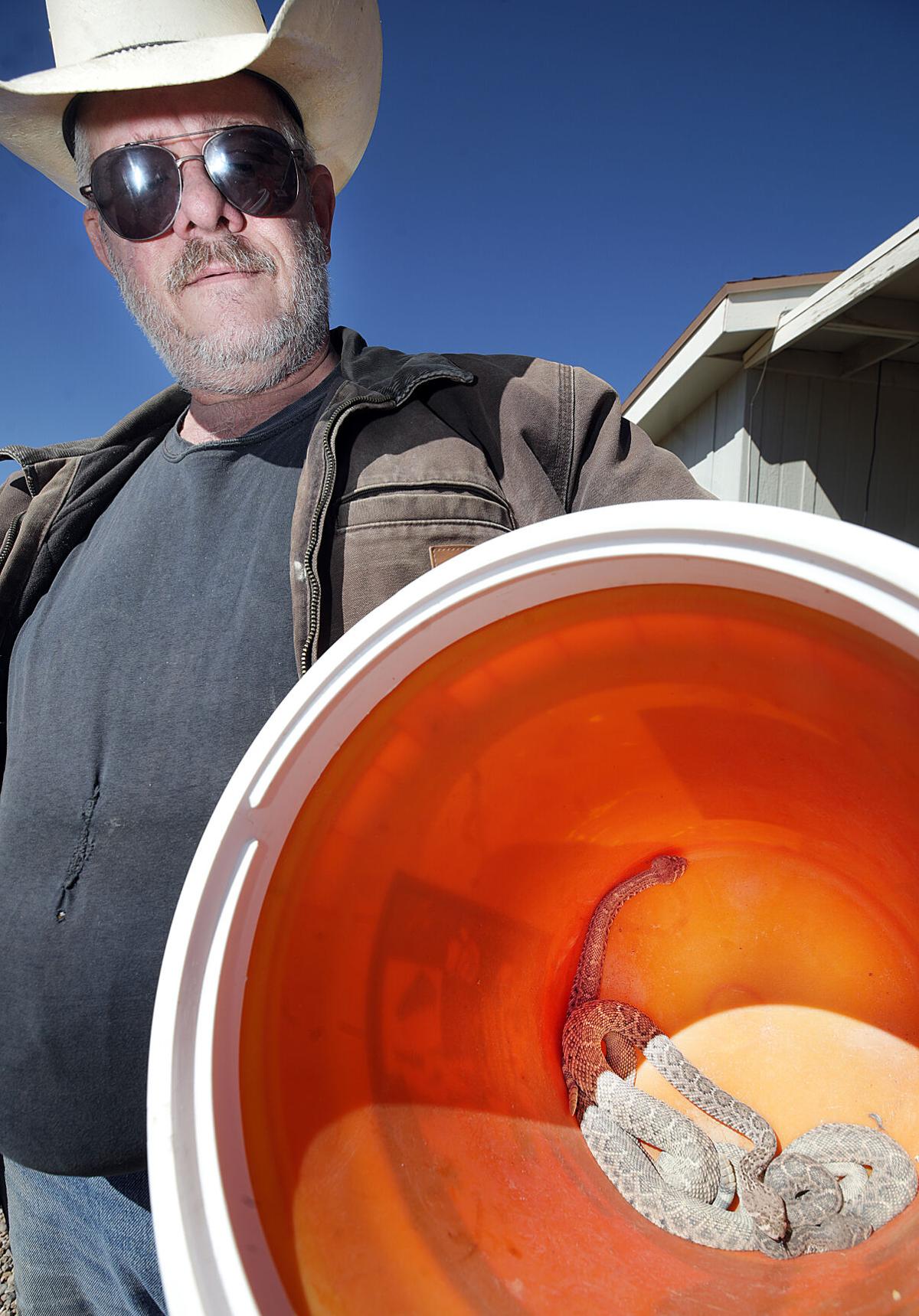 Bill Schumacher is a self-proclaimed "Snake Guy" who regularly and humanely removes up to 100 snakes from people's yards per year. 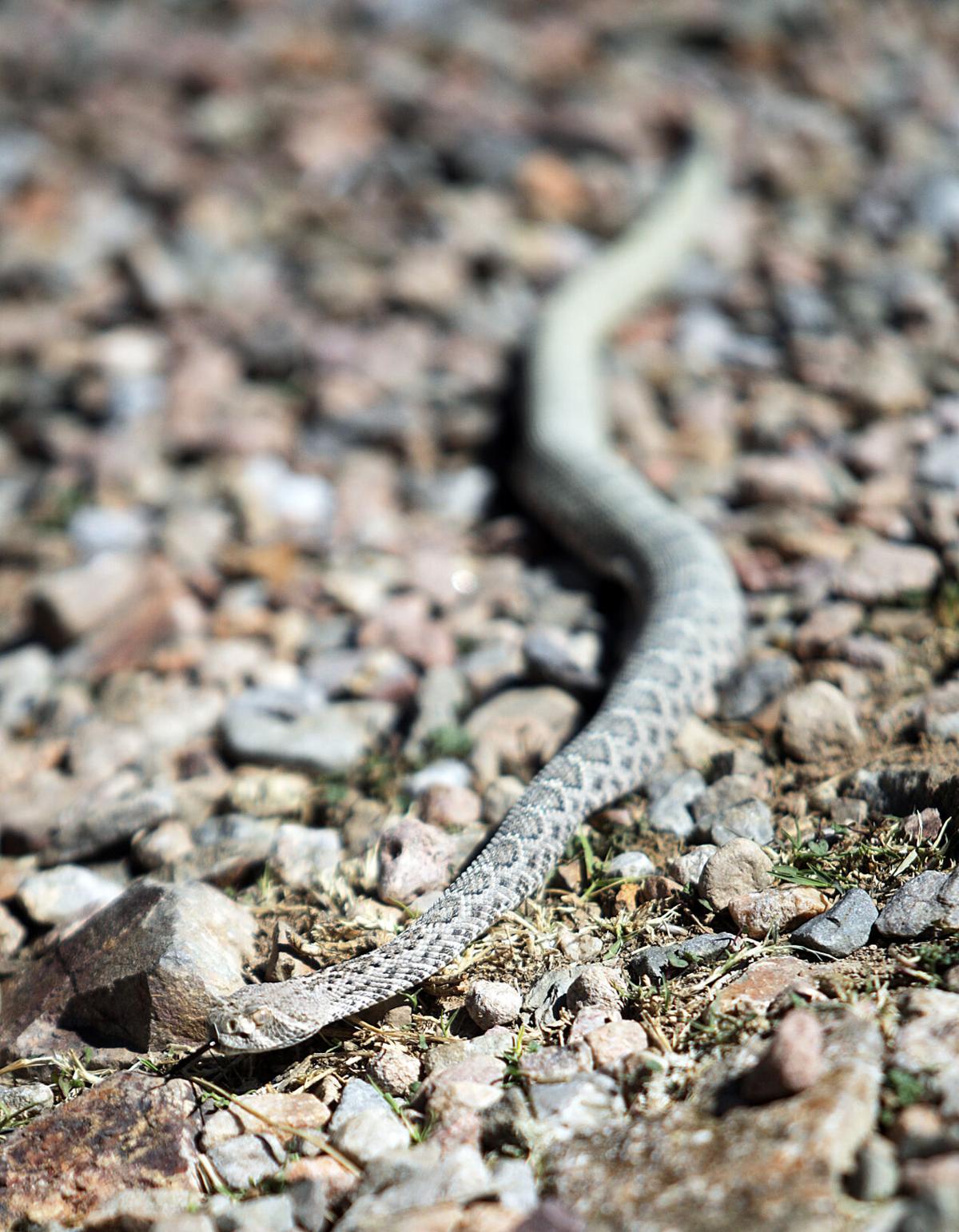 People need to always be aware of snakes as they easily can blend into the scenery. 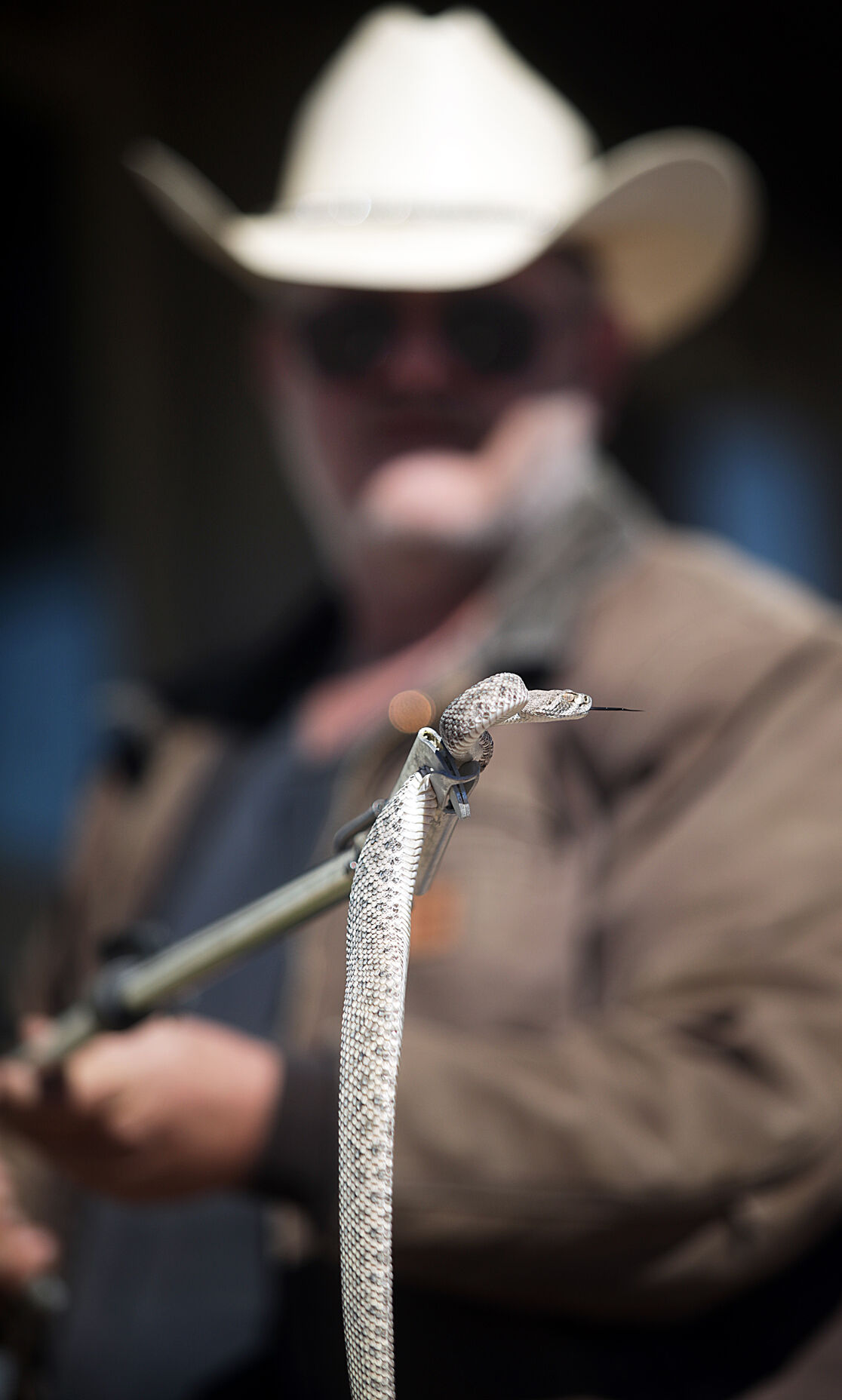 The “Snake Guy” displays a young rattlesnake he removed from a home. 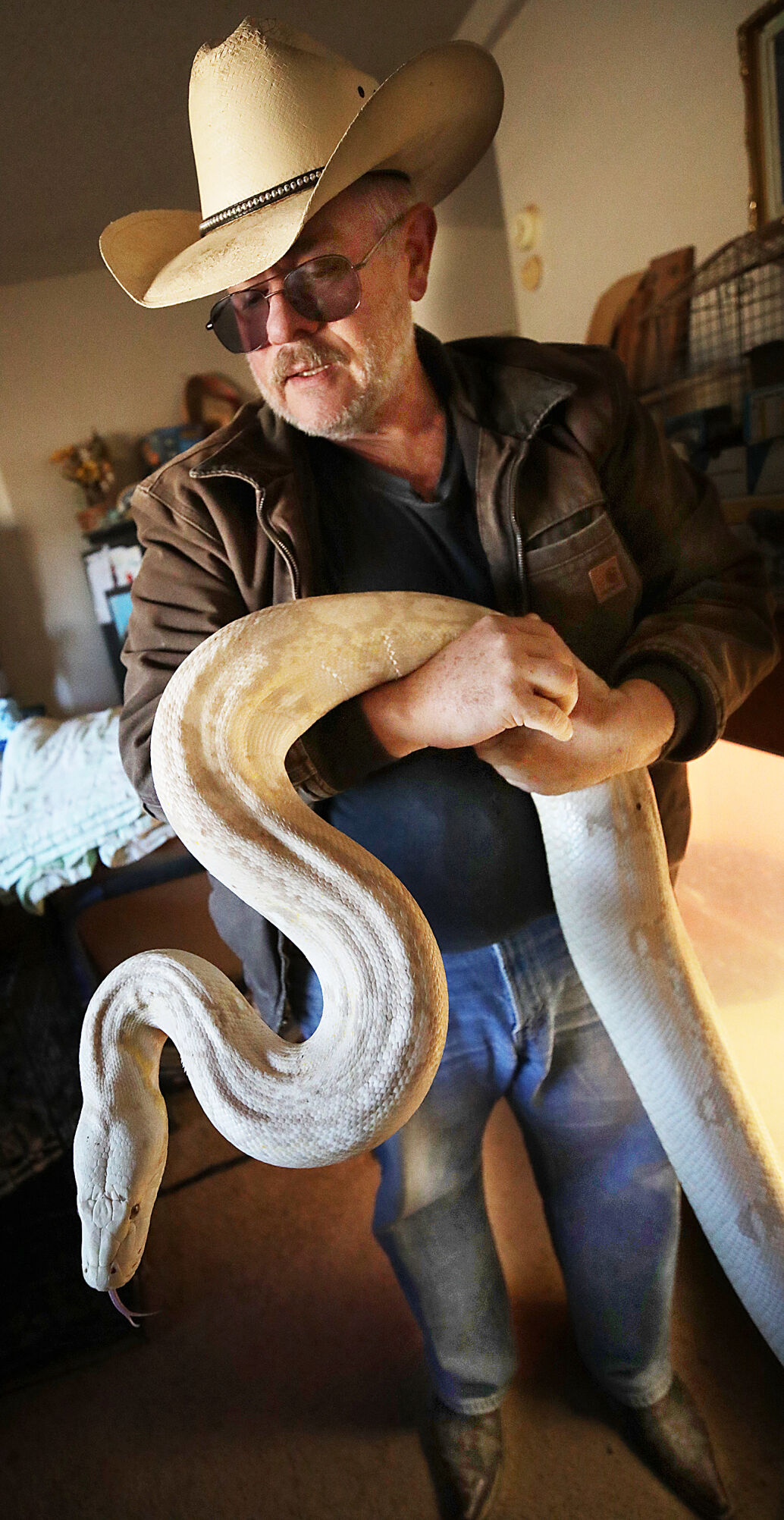 Bill Schumacher interacts with his 18½-foot-long python named Luna Thursday in his home in Hereford.

The “Snake Guy,” Bill Schumacher, removes three juvenile rattlesnakes from a container in front of his Hereford home.

Bill Schumacher is a self-proclaimed "Snake Guy" who regularly and humanely removes up to 100 snakes from people's yards per year.

People need to always be aware of snakes as they easily can blend into the scenery.

The “Snake Guy” displays a young rattlesnake he removed from a home.

Bill Schumacher interacts with his 18½-foot-long python named Luna Thursday in his home in Hereford.

The “Snake Guy,” Bill Schumacher, removes three juvenile rattlesnakes from a container in front of his Hereford home.

Editor’s note: Meet Your NABUR is a video series highlighting noteworthy local residents in Cochise County, brought to you by NABUR, the Herald/Review’s free online forum. Head to nabur.myheraldreview.com to see the accompanying video interview.

With a track record of removing more than a hundred snakes per year from local residents’ homes, Bill Schumacher has good reason to call himself Cochise County’s “Snake Guy.”

Even more remarkable is the fact that Schumacher, who is licensed by the Arizona Game and Fish Department to relocate venomous animals, lends his skills to the community on a purely donation basis.

Two to three times a day in the summer, Schumacher responds to calls from panicked residents across the county. His number one priority, he says, is making sure everyone stays safe and no one, including the snake, is harmed.

“What I do is I pick (the snakes) up to a place where I know there are five big rattlesnake dens, and I release them up there. If it’s too cold, I keep them here at the house and feed them before it warms up and I let them go,” Schumacher said.

Summer isn’t the only time Schumacher receives calls. Both this year and last he has received snake removal calls as early as mid-February, a fact he attributes to mild winters.

“In 2020, I relocated 98 diamondbacks, six mojaves, one black tail rattlesnake and one coral snake,” Schumacher said.

One question the snake expert gets a lot is how different snake species get along when relocated to the same dens.

“You gotta remember, in the winter time, they all den up together. They all get along great,” Schumacher said.

While Schumacher estimates 85% of the snakes he removes come from the Sierra Vista area, he provides services to the whole county 24/7. His business cards bearing the “Snake Guy” title can be found as far away as the post office in Pearce, he said.

With 45 years of experience handling snakes, Schumacher, who says he has loved reptiles all his life, was motivated to start his snake removal service after seeing a need on social media.

“When I first moved down here, I saw a lot of people posting pictures on Facebook of dead snakes. The way I look at it, the people saying ‘The only good snake is a dead snake,’ are the first ones (complaining) about the rodent problem,” Schumacher said.

Though the work keeps him busy, Schumacher says he is not in a hurry to expand the service and bring more people aboard due to the extensive experience needed and dangers that come with the job.

In addition to his volunteer work as a snake remover, Schumacher takes pride in bringing his pet reticulated python, Luna, who stretches to 18½ feet long, to Veterans Park on summer Sundays to educate others about snakes.

“I also bring her to schools and classrooms where 5- and 6-year-olds drag her around like a sack of potatoes,” he said. “She’s just an oversized worm, basically.”

There are many misconceptions about snakes proliferating in the community that Schumacher hopes to correct by educating others.

“There are no bull snakes in Arizona. Those are Sonoran gopher snakes,” he said.

Another popular misconception is that baby rattlesnakes produce more venom than adult rattlesnakes because they cannot control themselves. This too is false, according to Schumacher.

“Mojaves also don’t chase people. That is a completely false rumor,” he added.

Schumacher’s tips for dealing with snakes and staying safe:

Stay away and call someone who knows what they’re doing. There are some very dangerous snakes in the area, such as coral snakes. Anti-venom for coral snakes stopped being produced two years ago because the chances of getting bit are slim to none. They are extremely venomous. There aren’t too many around, but they are here.

Don’t use snake repellents you can buy in the store, Snake-Be-Gone or mothballs. It is a waste of money. Basically, it’s a poison for the rodents, so it poisons anything that eats the rodents. You’ll have the birds dying and the snakes dying, and harm the environment, too.

Snakes don’t like water. Most of the time, when you spray it down lightly with cold water, it will go away. However, take care not to use hot water, as that will kill the snake.

And lastly, have snakes relocated rather than killing them. The more snakes there are, the more the rodent population will be under control.