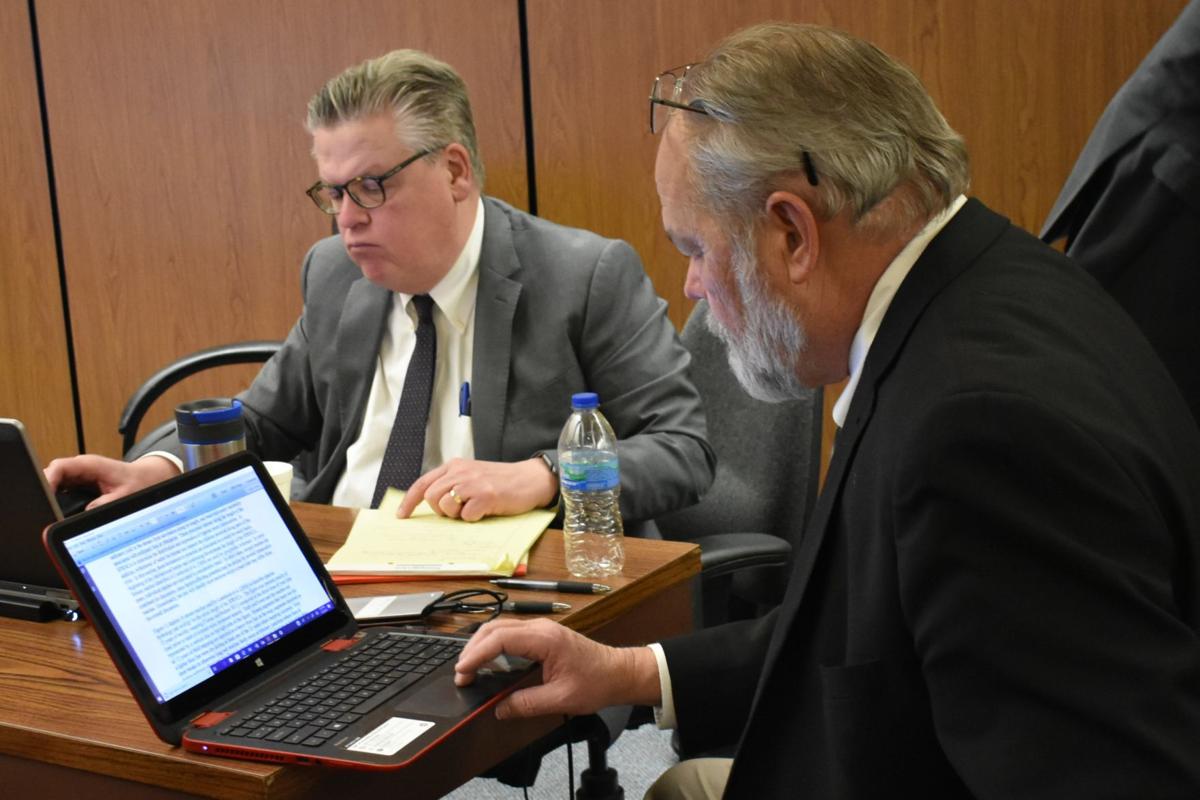 Attorneys William Sullivan, representing Pueblo Del Sol Water Co. and the City of Sierra Vista, respectively, tie up loose ends at the end of a day of testimony in the trial over BLM water rights for the SPRNCA Tuesday. 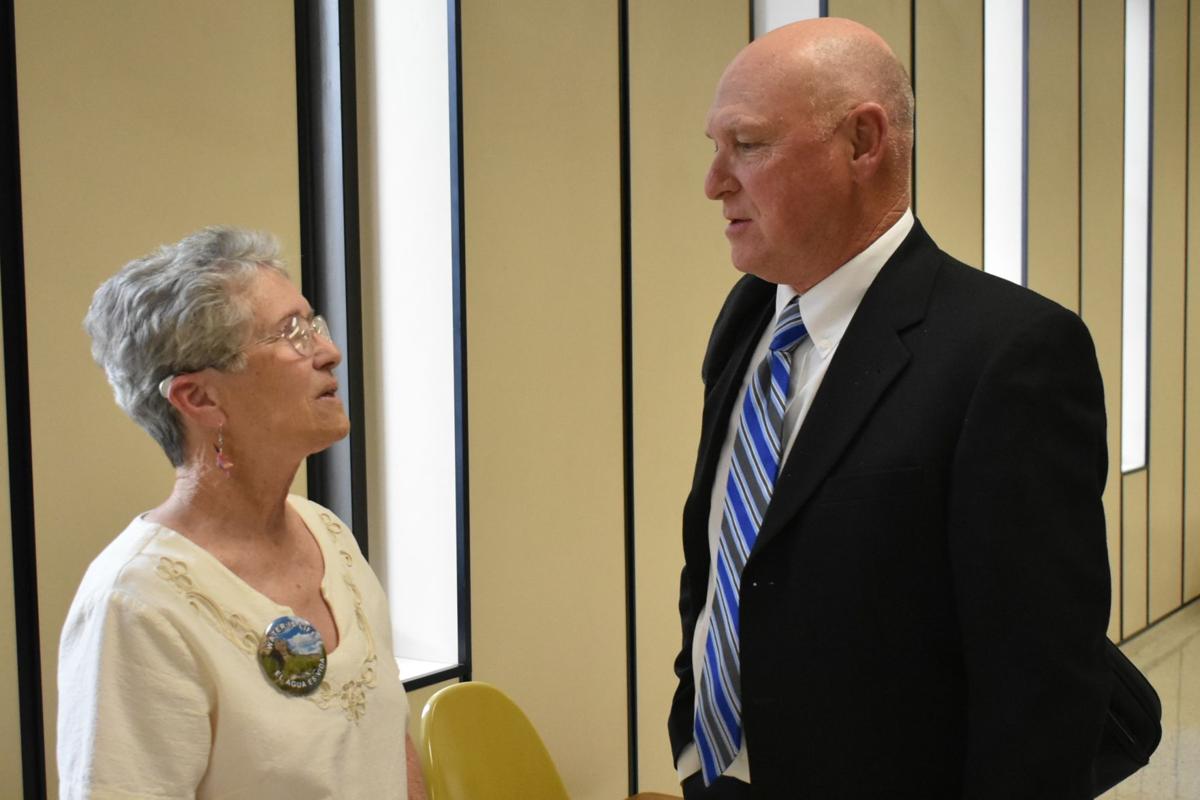 Attorneys William Sullivan, representing Pueblo Del Sol Water Co. and the City of Sierra Vista, respectively, tie up loose ends at the end of a day of testimony in the trial over BLM water rights for the SPRNCA Tuesday.

PHOENIX – Do the water needs of the cottonwood stands, willow galleries and other riparian vegetation affect the amount of water flowing in the San Pedro River?

Childress explained the claim was made for the health of the entire riparian system – the vegetation, the river, the seeps, the springs, the ponds and any other natural occurring waters. Some of the increase was to cover the needs of evapotranspiration, which is defined by Webster’s dictionary as “the process by which water is transferred from the land to the atmosphere by evaporation from the soil and other surfaces and by transpiration from plants.”

However, there was a sticking point. Heiserman pointed out the BLM was setting its water rights claim based on the state of the SPRNCA in 1988, a BLM decision based on the congressional legislation which established it. In 1988, there were fewer cottonwoods, willows and plants lining the river.

Heiserman also suggested the BLM should have provided figures for the minimum use of water needed to maintain the SPRNCA, but did not.

Liberty Water Corp. attorney Robert Anderson pushed a little harder for an answer and asked, “With an increase in vegetation, wouldn’t there be a decline in the flow of the river? Isn’t evapotranspiration taking water out of the system?”

Childress said it was hard to determine, and that there are a variety of dynamics at work with canopies. Trees shade the water and prevent evaporation, as well as keep the environment cooler.

Childress answered, “No. It’s daylighting at Curry Draw and is not going into the aquifer.”

Not enough time had passed since its operation began to determine if it was helping the aquifer or the base flow of the river, he said.

Childress stated that during his time from 2002 to 2008 as manager, he heard of proposed projects near the SPRNCA, but did not have any direct involvement in them since they were not on public land.

Childress said the BLM had the responsibility of preserving, protecting and enhancing the SPRNCA, “not to deal with water conservation. We were to protect all resources within the (SPRNCA).”

Mark Dixon, now a biology professor with the University of South Dakota, worked on a few San Pedro River studies with Julie Stromberg, a plant ecologist and botanist specializing in riparian and wetland ecosystems.

Sufficient streamflow and groundwater are requirements for a healthy riparian system and the BLM has a rightful claim to enough water to sustain the system’s life, he noted.

Back in the 1880s, the San Pedro could hardly be called a river, he explained. It was more of a swamp, or a wetlands. Over time, the river became entrenched and downcutting from erosion left banks high and dry. Now, its flows are intermittent at some points, ephemeral at others, and perennial in several reaches.

Dixon said different plants and trees need different levels of water for proper health. Terraces provide the needed grounding sites for reproduction and expansion. Seeds from the cottonwoods and willows need open space and moist soil to germinate and enough moisture to grow to saplings. As the river meanders, shifting water away from cottonwoods, the trees decline and can die. New ones need to grow to take their place. Willows are also sensitive to groundwater decline.

When bank vegetation and the deciduous trees die off, Tamarisk, also called Salt Cedar, can take over, he continued. These non-native invasive trees are more drought-tolerant.

Dixon said his research in the SPRNCA indicated it was in good shape, with over 40 percent of its reaches considered Class 3, a positive level of health. This is a condition of health galleries of cottonwood and willows.

Testimony in the trial, scheduled to last several weeks, will continue Wednesday.

Of the total 44,000 acre feet per year the U.S. Bureau of Land Management (BLM) is seeking in the ongoing trial, it had claimed a right to 11,150 acre feet of groundwater to use in an emergency, such as a long drought, to maintain flow in the San Pedro River by using retired agricultural wells.

Monday, at the end of the first day of the water rights trial, former SPRNCA manager William Childress said the BLM had decided to reduce the claim to 300 acre feet. The claim was made after a zero-flow event occurred at the Charleston gauge. Childress noted the agency just wants to secure enough water to maintain the flow.

Carrie Brennan, attorney with the Arizona State Land Department, asked about grazing practices on the SPRNCA Tuesday. How are cattle kept out of the SPRNCA? What type of fencing? Who maintains the fencing? What about Mexican cattle?

Former SPRNCA manager William Childress replied the BLM uses barbed-wire fencing, and staff with volunteers help maintain the fences. When stray cattle are found, they are identified by ranch brands and returned to their owners. Mexican cattle are herded back across the border.

Brennan also asked, “Has the BLM sold cattle at auction?”

Childress said, “No. The BLM doesn’t sell cattle. The inspector takes the cows. If no one claimed them, I guess he could sell them.”