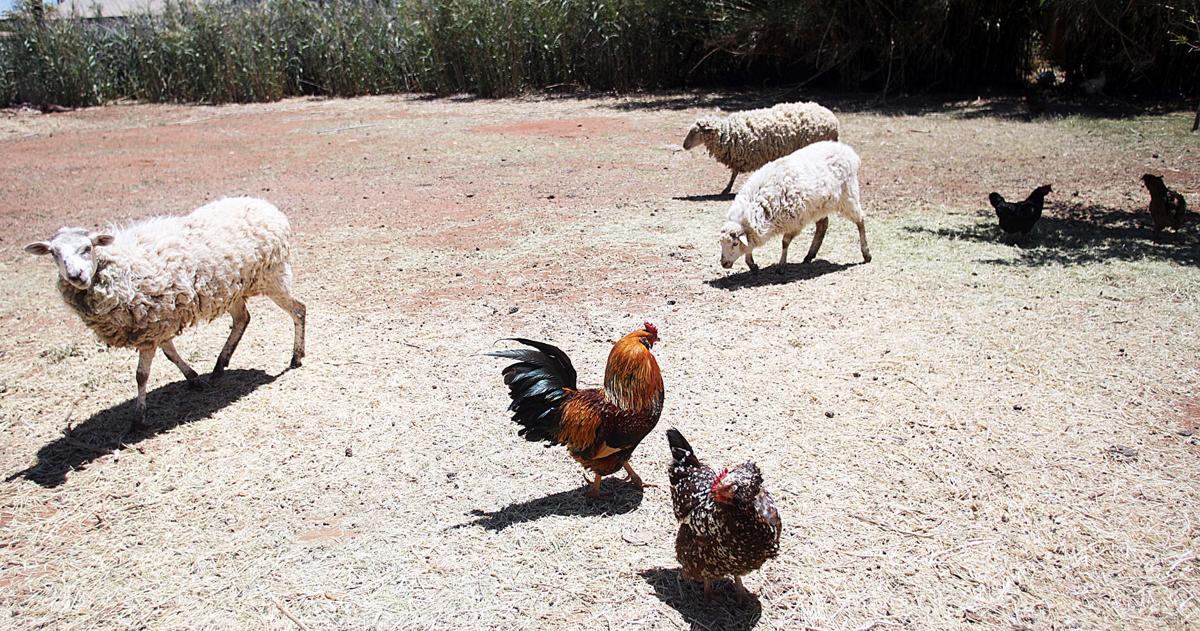 Sheep and chickens roam around the backyard of the Wood family’s Naco home last week. 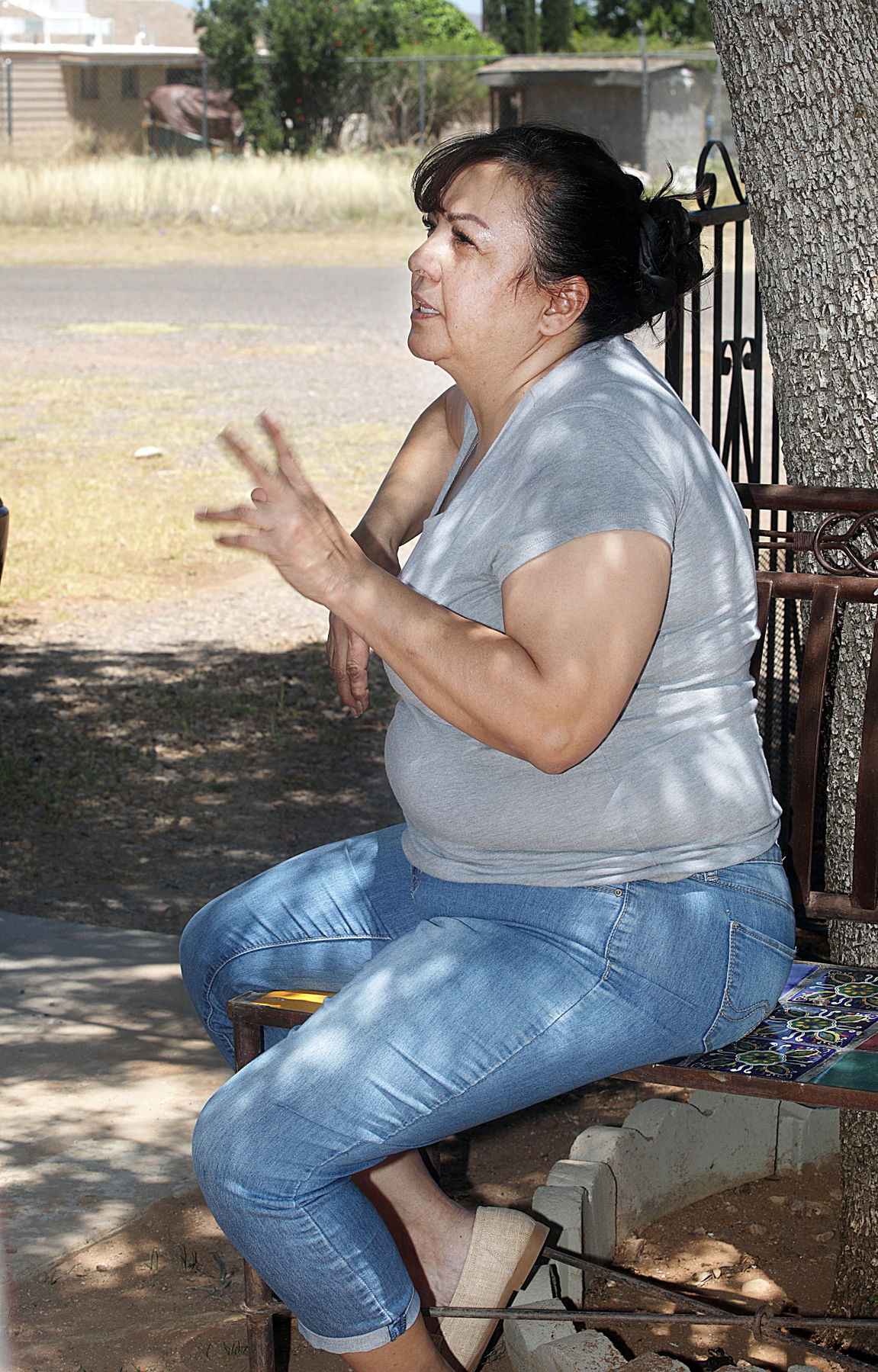 Delores Muñoz talks about her across the street neighbors, the Wood family, and their three sheep. 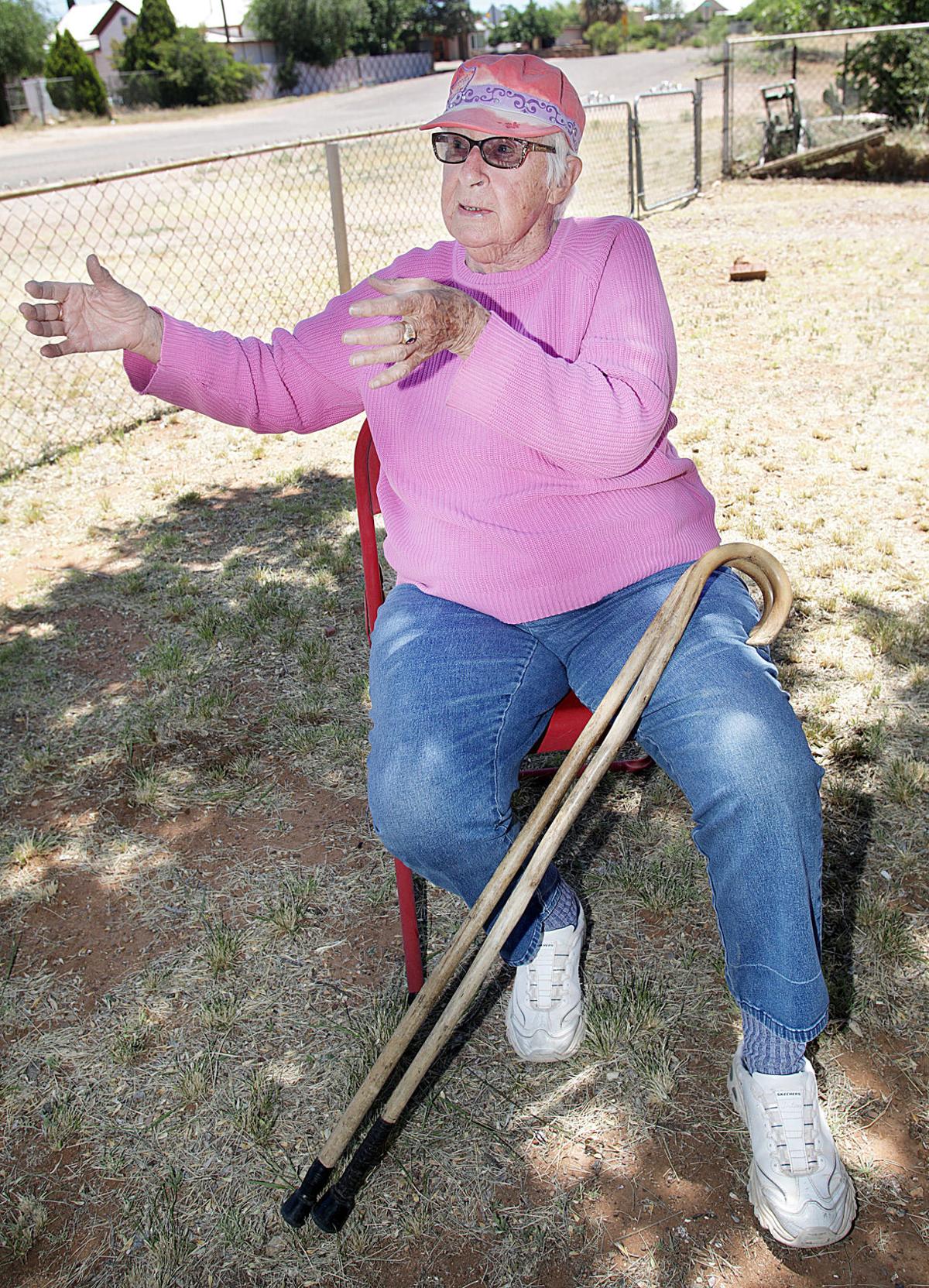 Naco resident Margue Ritte elaborates about the three sheep a nearby neighbor owns.

Sheep and chickens roam around the backyard of the Wood family’s Naco home last week.

Delores Muñoz talks about her across the street neighbors, the Wood family, and their three sheep.

Naco resident Margue Ritte elaborates about the three sheep a nearby neighbor owns.

NACO — Three sheep are living in the center of Naco in a church pastor’s yard, and some residents aren’t feeling too neighborly about it.

The trio of sheep belong to Jesse and Jessica Wood. At their residence Thursday afternoon, Jessica Wood said they got the sheep because they need help mowing the weeds on their property. According to an application for a variance that Jesse Wood filed in March, the sheep were necessary because he suffers from allergies that level him “for the better part of a week,” if he mows grass.

Jesse Wood, a pastor at First Baptist Church in Sierra Vista and Naco Christian Church, declined comment for this article. But Jessica Wood said in an interview with the Herald/Review the sheep were obtained in January from a rancher, in exchange for coffee that Jessica Wood roasts and sells at local farmers markets.

While the couple — who also have chickens, as well as domestic pets — obtained a conditional variance from Cochise County’s Board of Adjustment District 2, the initial recommendation from the county’s Development Services Department was to deny the application.

On April 30 however, after Jesse Wood prepared an extensive plea for his case, county officials approved a “conditional variance” with two requirements. The Woods’ are prohibited from getting any more sheep, and they must keep their property “routinely cleaned to prevent offensive odors.”

In his application for the variance, Jesse Wood said he does not intend on using the three sheep for financial gain.

“We do not intend to run any sort of commercial enterprise or farming operation,” Jesse Wood said in his application. “The sheep are functional pets, much the way a dog may be kept for the enjoyment of its owner and also serve the function (of) alerting the owner to trespassers.”

Pointing out that “Naco is no stranger to noisy animals,” Jesse Wood also enumerated the menagerie of critters that others in Naco have, such as donkeys, peacocks, roosters, ducks and “dogs that bark throughout the night.”

Jessica Wood said she and her husband want to be good neighbors and she wishes that complainants would come to them so that the situation could be addressed.

She said initially, the rancher gave them two female sheep in exchange for her Cafe Cultiva. But the sheep were pregnant, and soon the Woods had two ewes and two lambs. One of the lambs later died, Jessica Wood said, leaving the three remaining sheep.

As it stands now, the Woods property on West Dominguez Street, is 11,750-square feet smaller than the 36,000-square feet normally required by the county for the maintenance of livestock. The size of the Wood’s lot was one of the concerns voiced by staff at the county’s development services department.

County staff was also expressed concern that allowing the sheep could set a precedent for others in Naco — or other areas of Cochise County zoned residential/general business — to begin filling up their yards with farm animals.

There were also four neighbors who complained.

One of them, 89-year-old Margue Ritte, is not an immediate neighbor of the Woods, but Ritte said she is opposed to the sheep “on principle.”

“It’s the principle of the thing. It tells the whole town, ‘Yes, you can have a cow, you can have sheep, you can have whatever you want,’” Ritte said Friday. “This is a neighborhood. It’s not an area where farm animals, livestock should be. This is a little town and he’s not being a good neighbor.

Alex Marinez, who lives behind Jesse and Jessica Wood on Giesler Avenue, also complained to the county. A woman who answered the phone at Marinez’s house Friday said there would be no comment on the matter.

In his written complaint to the county, Marinez stated that his neighbor’s property is not large enough for livestock.

He also mentioned his concern for waste seeping into the ground and whether that would affect the Naco Water District well located in a fenced-in area between Wood’s and Marinez’s properties.

“We give in to this resident and others will think they can too,” Marinez wrote in his complaint. “Please NO, do not grant the variance.”

Neighbor Anthony Garcia, who lives on West Dominguez, also expressed concern about the water tank and the fact that “we haven’t had anybody with livestock before.”

Two other neighbors said that as far as they’re concerned, the three sheep are welcome.

Dolores Muñoz, who lives across the street from Jesse and Jessica Wood, said the sheep are quiet and they don’t smell.

In the meantime, Jessica Wood said she is looking for someone to shave her trio of sheep in order to keep them cool for the oncoming summer.

The ability to appeal to the conditional variance granted to the Woods, which must be filed at Cochise County Superior Court, expires on May 28.