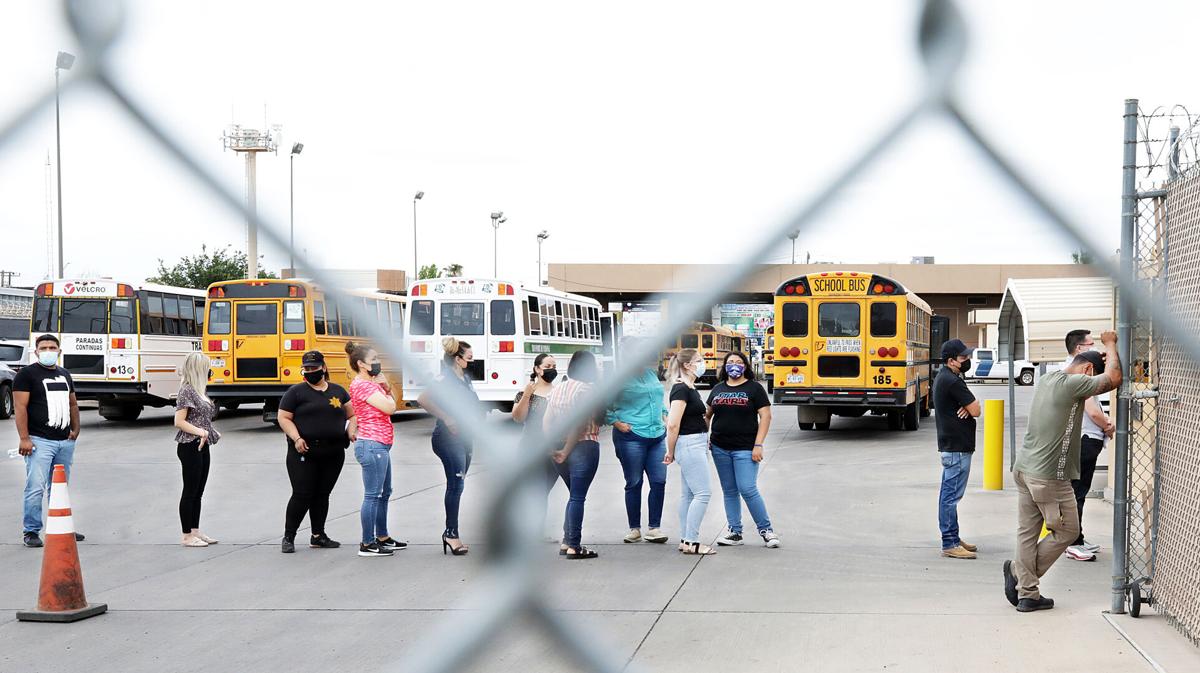 A binational vaccination effort was held in Douglas-Agua Prieta Wednesday and Thursday morning. The clinic was at the U.S. Customs and Border Protection port of entry in Douglas. 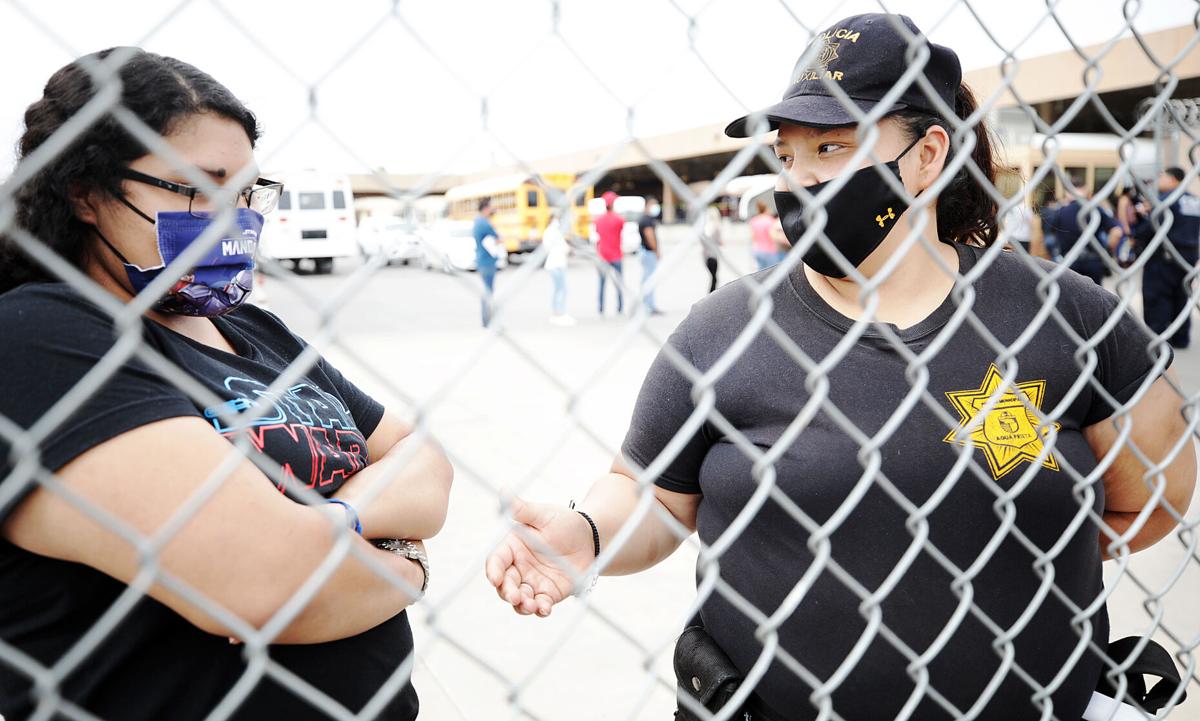 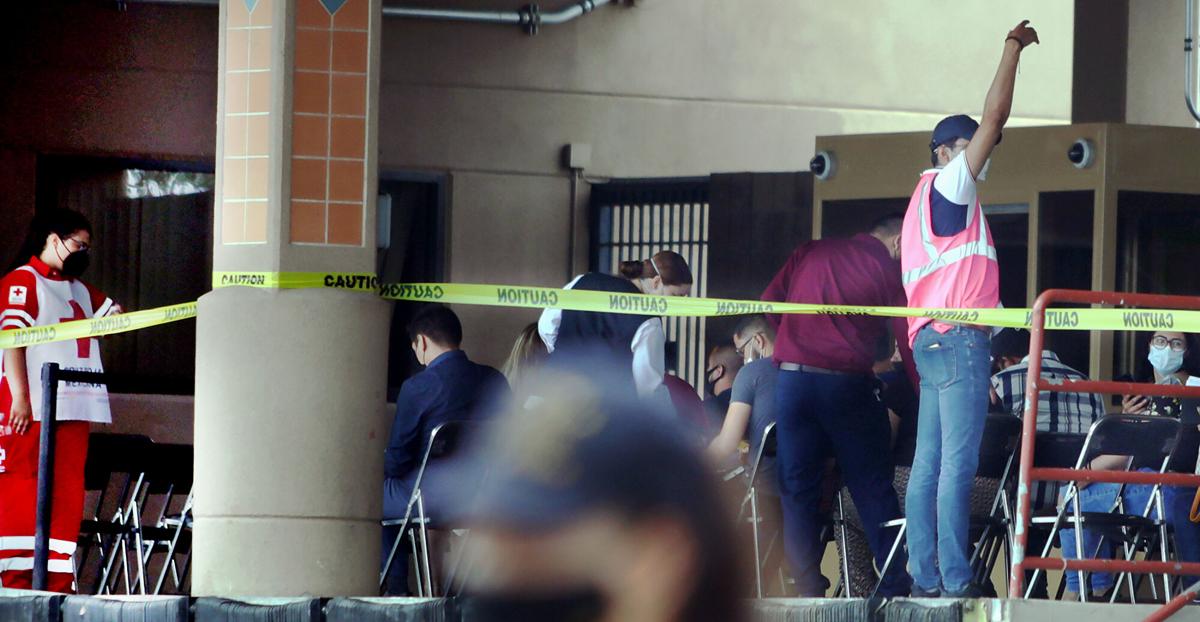 Mexican residents go to a post vaccination observation area after having been administered the shot Thursday. The vaccines were provided by the University of Arizona. 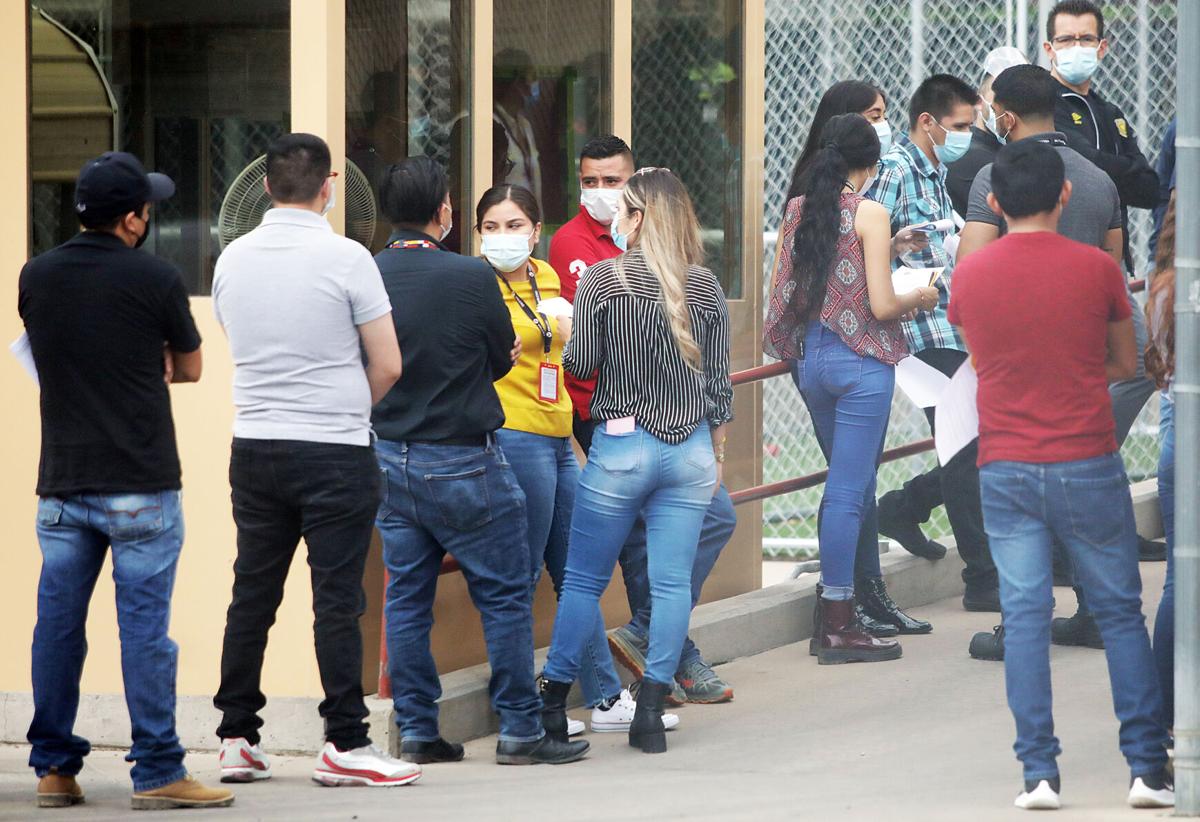 A binational vaccination effort was held in Douglas-Agua Prieta Wednesday and Thursday morning. The clinic was at the U.S. Customs and Border Protection port of entry in Douglas.

Mexican residents go to a post vaccination observation area after having been administered the shot Thursday. The vaccines were provided by the University of Arizona.

DOUGLAS— A binational effort between Mexico and several levels of the U.S. government, as well as the University of Arizona, was launched early this week when dozens of first responders and factory workers from Agua Prieta were bussed to the border and given their Johnson & Johnson/Janssen one-shot vaccines.

The campaign to vaccinate people in Sonora who live along the border in Agua Prieta, Naco and Nogales, is multipurposed, said Ricardo Pineda Albarran, the Mexican consul in Douglas.

Chief among them is the welfare of the residents of Sonora and the ability to achieve immunity along the border towns with Arizona so the robust economic relationship shared between the two states — Sonora, Mexico, and Arizona — before COVID-19 hit can resume.

Currently, Mexicans are restricted from entering the U.S. unless it’s for school, work or other essential reasons. Non-essential travel — described as “tourism-related” — which includes shopping, patronizing restaurants and visiting friends and relatives has been prohibited since the pandemic took hold in late March 2020.

The travel restriction, in place until July 21, has been felt in Cochise County where mayors in Sierra Vista and Douglas, for example, said their local economies have taken a hit because residents of Naco and Agua Prieta have not been allowed to cross the border for shopping and other activities.

“There is a history between us (Sonora and Arizona) over the years, consisting of work, schools, commerce, families (going back and forth),” Pineda said. “Our collaboration has been extraordinary.”

The consul is hopeful that the vaccination campaign, which kicked off in San Diego then moved into Arizona, will not only help Mexicans stave off the virus but will help to re-establish the economic bond between Sonora and Arizona.

Along with the Mexican government, the team behind the vaccination effort on Wednesday and Thursday — which Pineda called “pilot programs” — included the Mel and Enid Zuckerman College of Public Health at the University of Arizona and the latter’s mobile health units, the state of Arizona, Cochise and Maricopa counties and U.S. Customs and Border Protection.

The vaccinations were administered by university personnel under the direction of Dr. Cecilia Rosales, associate dean at Zuckerman College, Pineda said. Rosales is the founder of the school’s mobile health units, designed to reach underserved populations.

The next vaccination event on the border is scheduled for July 16 and 17 in Naco, Pineda said.

The partnership that struck Pineda the most, though, was the help offered by U.S. Customs and Border Protection. CBP agent and spokesmen Manuel Davila said the federal government offered to allow the Mexican nationals to get inoculated at the Douglas port of entry in the cargo processing area.

The vaccines were administered between 5 and 9 a.m. in the fenced-in outdoor area as several Office of Field Operations agents stood nearby.

Among those getting inoculated Thursday morning just before 9 a.m., were Agua Prieta auxiliary police officer Yadira Gallegos, 29, and Paula Wong, an 18-year-old clerk at the law enforcement agency.

Gallegos said she heard about the campaign for the vaccinations from other workmates and she wanted to participate.

“They told us it was for our benefit and to help prevent the spread of the new variant,” Gallegos said.

Wong, who processes fines and citations, said she, too, felt that getting inoculated would be for her own good.

The two women said they’re aware that a lot of people are afraid of getting inoculated, but they compared the vaccine to others they’ve received throughout the years to ward off the flu and rubella, for example.

Pineda said about 1,400 people were vaccinated at the port of entry during the two-day event.

Douglas Mayor Donald Huish was pleased with that number, saying he believes more Mexican nationals were inoculated in Douglas than in Nogales. Huish was also grateful to the CBP for providing the port of entry’s cargo area for the vaccination venue.

“This would not have happened if the federal government had not offered to provide that cargo area,” Huish said Thursday afternoon.

The mayor also expressed his desire for the travel restrictions to be lifted and hopes the vaccination campaigns will contribute toward that.

“The restrictions have hurt the smaller businesses, the mom and pops in the area,” Huish said. “When people from Agua Prieta have come here for essential shopping, they do not go to these smaller shops, they go to Walmart.”

In addition to the economic hardships, there have been emotional upheavals, Huish said, because families on both sides of the border have been unable to visit each other.

“We can’t forget the emotional and spiritual side of this,” Huish said.

Sierra Vista Mayor Rick Mueller echoed Huish on the effect the restrictions have had on businesses in his city. But he also mentioned that a coalition of border mayors that met occasionally to talk about cultural programs and commerce have not been able to do so.

“We have done nothing since the pandemic and the restrictions,” Mueller said.