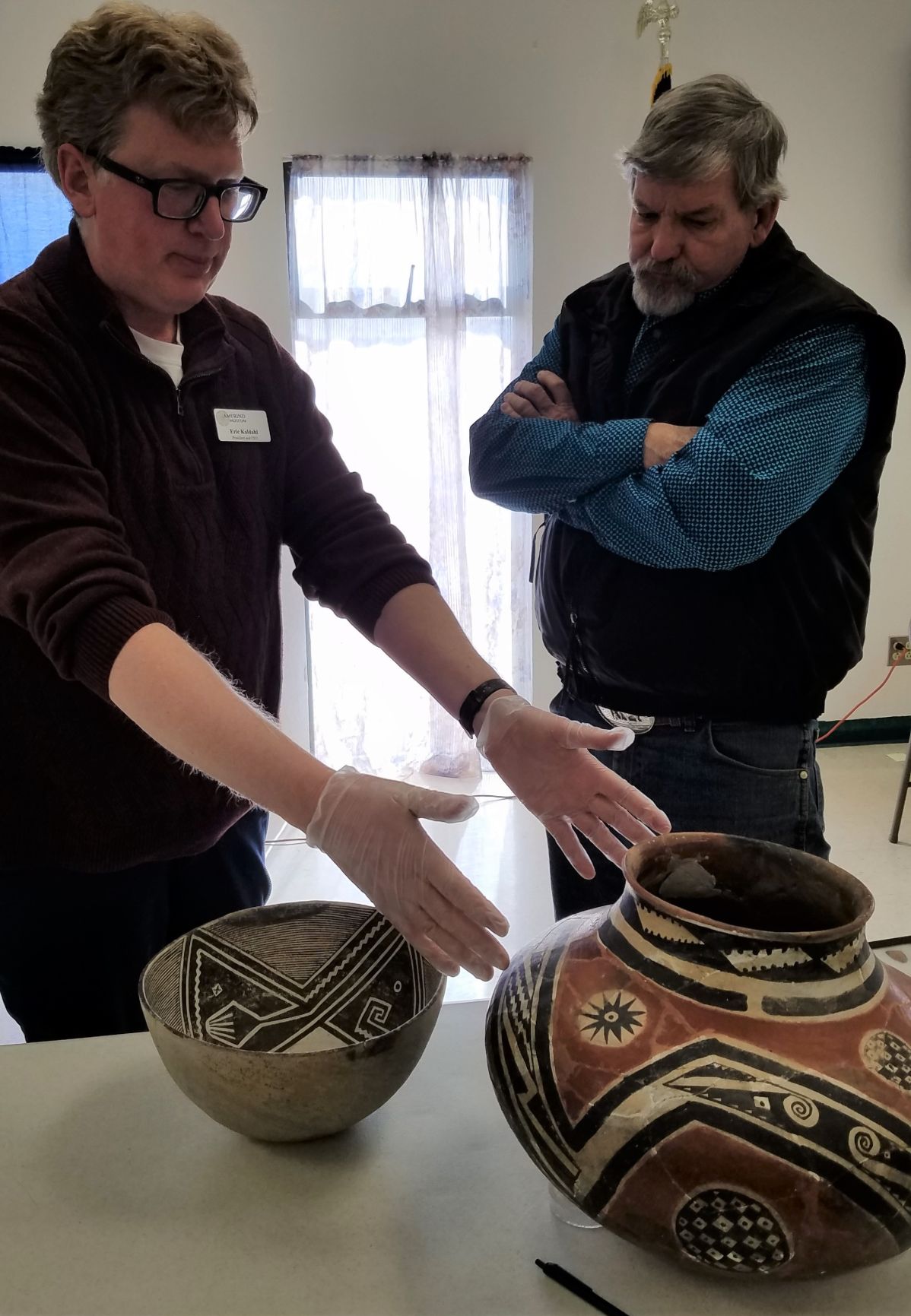 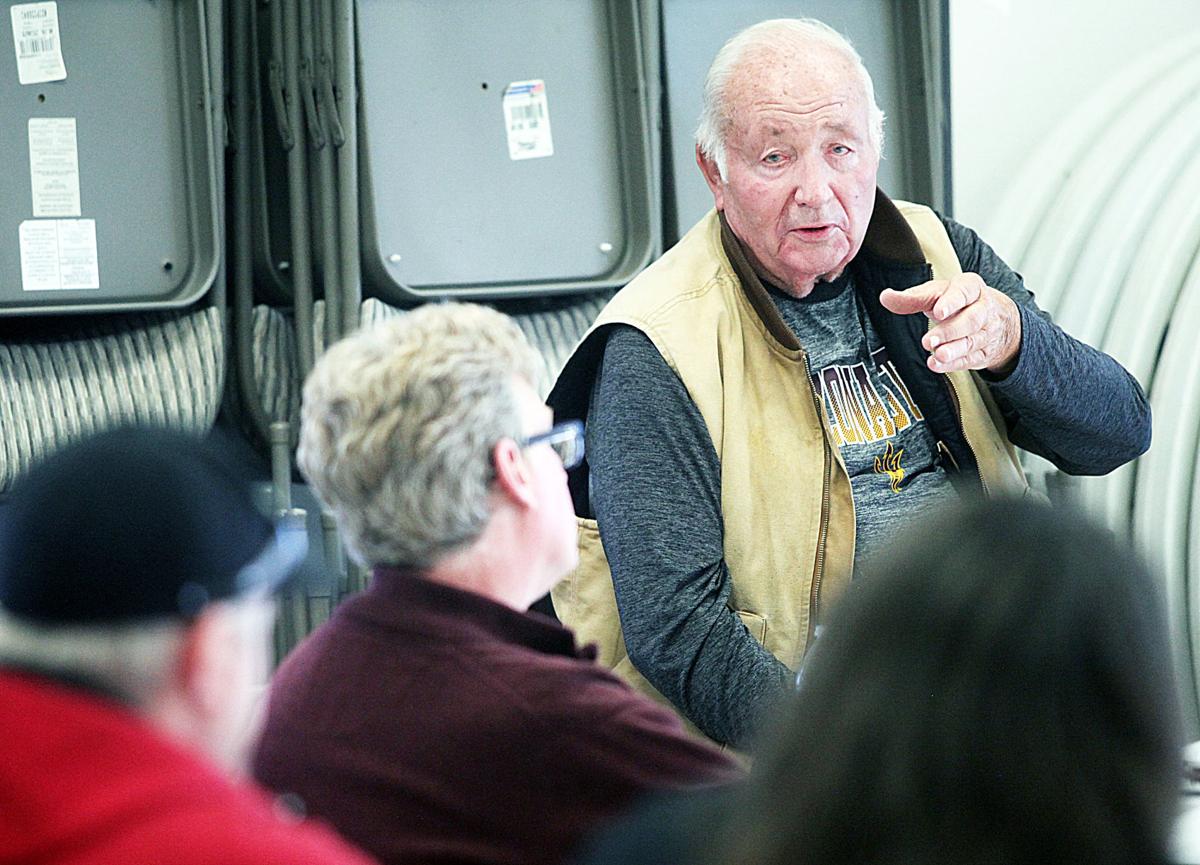 Area resident Howard Bethel is the keynote speaker during last week’s Willcox Basin Workshop at the Sunsets Community Center in Pearce. Bethel talked about the history of the aquifer. 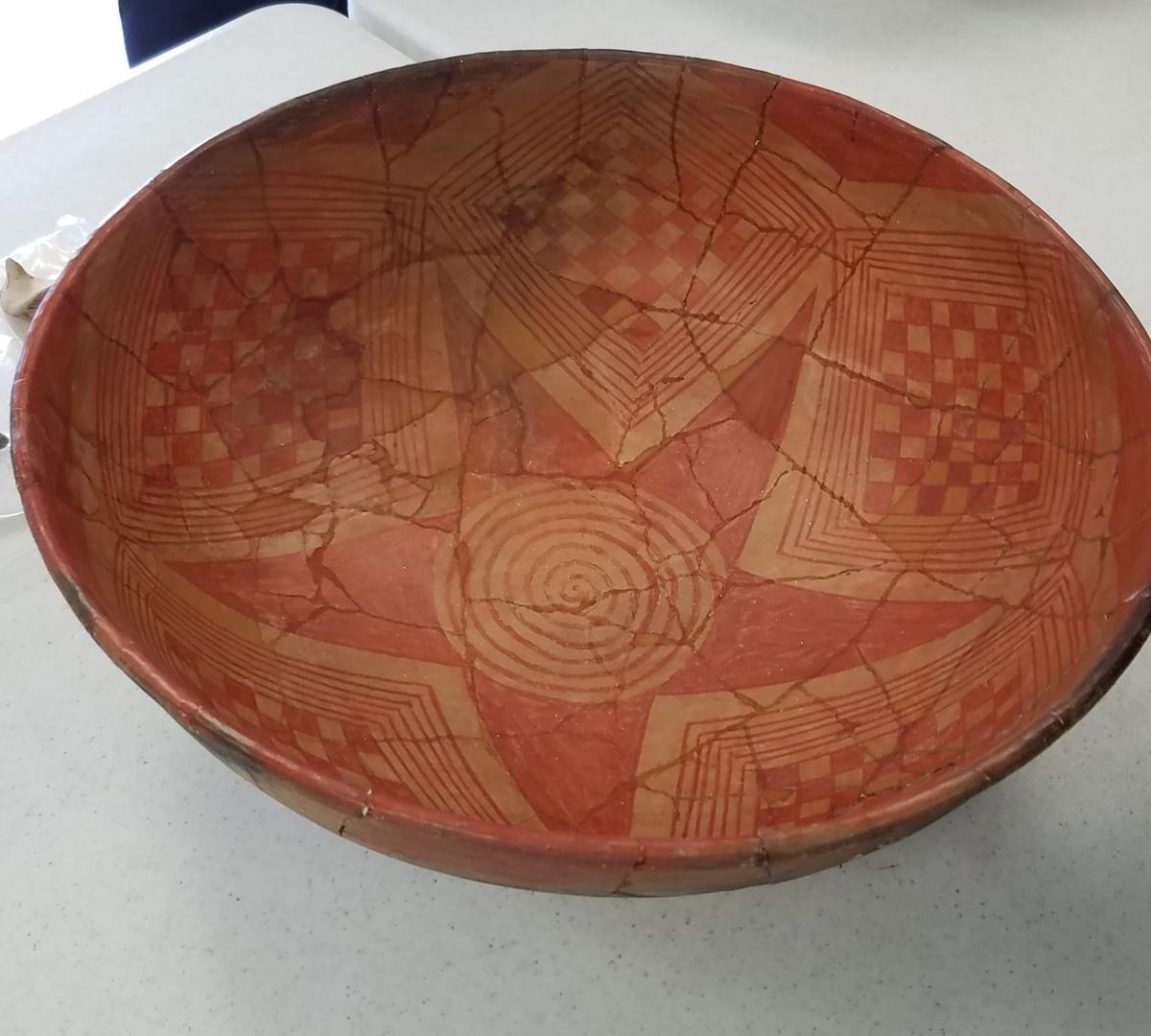 Recovery and restoration of this unique 900 year old bowl made by early people of the Willcox area took days and weeks and now rests in the Amerind Museum in Dragoon.

Area resident Howard Bethel is the keynote speaker during last week’s Willcox Basin Workshop at the Sunsets Community Center in Pearce. Bethel talked about the history of the aquifer.

Recovery and restoration of this unique 900 year old bowl made by early people of the Willcox area took days and weeks and now rests in the Amerind Museum in Dragoon.

SUNSITES — The first of four scheduled workshops on the Willcox Basin, called the Willcox Water Project (WWP), kicked off Wednesday with a history of the Sulphur Spring Valley’s first inhabitants and an overview of the Willcox Playa.

Peggy Judd, the Cochise County supervisor who represents the northeastern area of the county, told the group of 40 people she was aware of the concerns of residents in the Willcox area regarding water issues and wanted to provide a forum so they could learn about the aquifer.

She said she was spurred to action after meeting former Arizona Governor Bruce Babbitt at a county supervisors conference who suggested local governments, not the state, would be better water managers.

She and the county will not be determining just “what to do about it” is. That will be left up to the members of the communities after hearing from all the experts, she continued.

“I’m going to be listening and learning just like all of you,” she said. “This has to be your project.”

Once the monthly workshops are over, a stakeholder group will be formed, she explained. The group will discuss what was learned, review public comments and decide if they have enough support to approach the state legislators with a plan to help with the water issues the area faces. It must be a grassroots effort.

Christine O’Hara, Southeast Arizona Development Group, is managing the WWP and has already built a website where all the videos, news stories, information and public comments will be available to view. The mission of WWP is to gather citizens, provide education, then develop water solutions through a transparent stakeholder process. Prior to 2021 Legislative Session, the community will be re-engaged to advocate for a positive change in local water policy.

Archeologist Eric Kaldahl, Amerind Museum president and CEO, provided the human story of the valley and showed numerous artifacts collected from the region dating from 13,000 years ago to 700 years ago. In fact, the discovery of the 13,000-year-old spearhead was the first to date indigenous people to that time.

The Willcox Playa was a huge lake and marsh area 13,000 years ago and many stone points have been found alongside mammoth bones and those of other extinct mammal species including bison, horse and camel.

Water, of course, draws animals to it and people followed the animals, he said. They took advantage of the hunting until the lake began to dry up around 10,000 years ago. It took thousands of years for the lake to disappear into what is now the Willcox Playa.

Ancient communities began farming, built irrigation ditches, dams, berms and waffle gardens as they learned to grow their own food. They built special plots surrounded by berms to hold water with sunken planting beds, called waffle beds. The practice allowed crops to be grown with lesser amounts of rainfall as they were designed to capture every drop.

Growing grains meant storage was needed and pits were often dug and hollowed out of stone croppings. It also created a need for pottery and the people developed their own style of storage containers painted with beautiful, spiritual and geometric designs.

One Kaldahl showed was a spectacular large, reddish colored bowl with a five pointed star in the bottom and a geometric checkboard design in between the star points. The shards were painstakingly glued back together which did not distract at all from the incredible craftsmanship of the pottery. Though it was made in the Willcox valley, it was found in New Mexico.

A jar, made by a tribe in New Mexico in the more familiar style with red, white and black painted geometric designs, was found in Willcox. He said it indicated the communities were trading, as were the numerous seashells collected from the Pacific Ocean found at various sites around the area.

For communities relying on farming and irrigation, which allowed settlements to form, the loss of water pushed them to the base of the hills and mountains where water would collect.

The Amerind Museum has a vast collection of artifacts which show the peoples who made an incredible array of arrowheads, spearpoints and stone beads collected rocks from a 200-square mile area.

Little is found of the Apaches who once wandered the area due to their nomadic lifestyle which took them from the Dragoon and Chiricahua mountains down into Mexico until their displacement in the mid-1800s.

Local historian Howard Bethel talked about the Willcox Playa and its military history of weapons testing, though today the portion of the dry lake, once called Lake Cochise, still under control of the U.S. Army has become one of the landing sites for the Boeing Starliner reusable spacecraft.

He talked about early explorers in 1849 to the area who thought the great salty, sand bed was water and their discouragement of finding it was not water at all.

The Willcox Basin covers about 1,911-square miles running north of Willcox into Graham County to the Aravaipa Creek Basin, east to the San Simon Valley Sub-basin and the Chiricahua Mountains, south to the Douglas Basin and the San Bernardino Valley, and west to the Dragoon Mountains and the Upper San Pedro Basin. The region includes Willcox, the towns of Dos Cabezas, Cochise, Sunizona, Pearce and Sunsites, and the community of Kansas Settlement.

A core drilling project study by the University of Arizona found palm frond fossils which showed the far different vegetation which existed eons ago, he added.

About 15,000 years ago in Willcox Playa, Lake Cochise reached a maximum depth of 46 feet and covered 140 square miles, maintained by the relatively cool, moist Pleistocene climate.

Now, with far less rainfall, the playa only fills with the monsoon rains and snow melt. However, it is enough to support a population of tiny shrimp whose eggs can remain viable for 20 to 30 years, he noted. It is also known for its metallic beetles.

It remains a wintering feeding ground for greater and lesser Sandhill Cranes and many other waterfowl species which draws birders and tourists from around the country.

The next workshop will be held on Wednesday, Feb. 12, at 12:30 p.m. in Sunsites at the Sunsites Senior Center and at 5 p.m. at the Willcox Community Center and will feature discussions on the aquifer, private well ownership and the differences between private and commercial wells.

For more information on the Willcox Water Project, visit the website at: https://willcoxwaterproject.org/