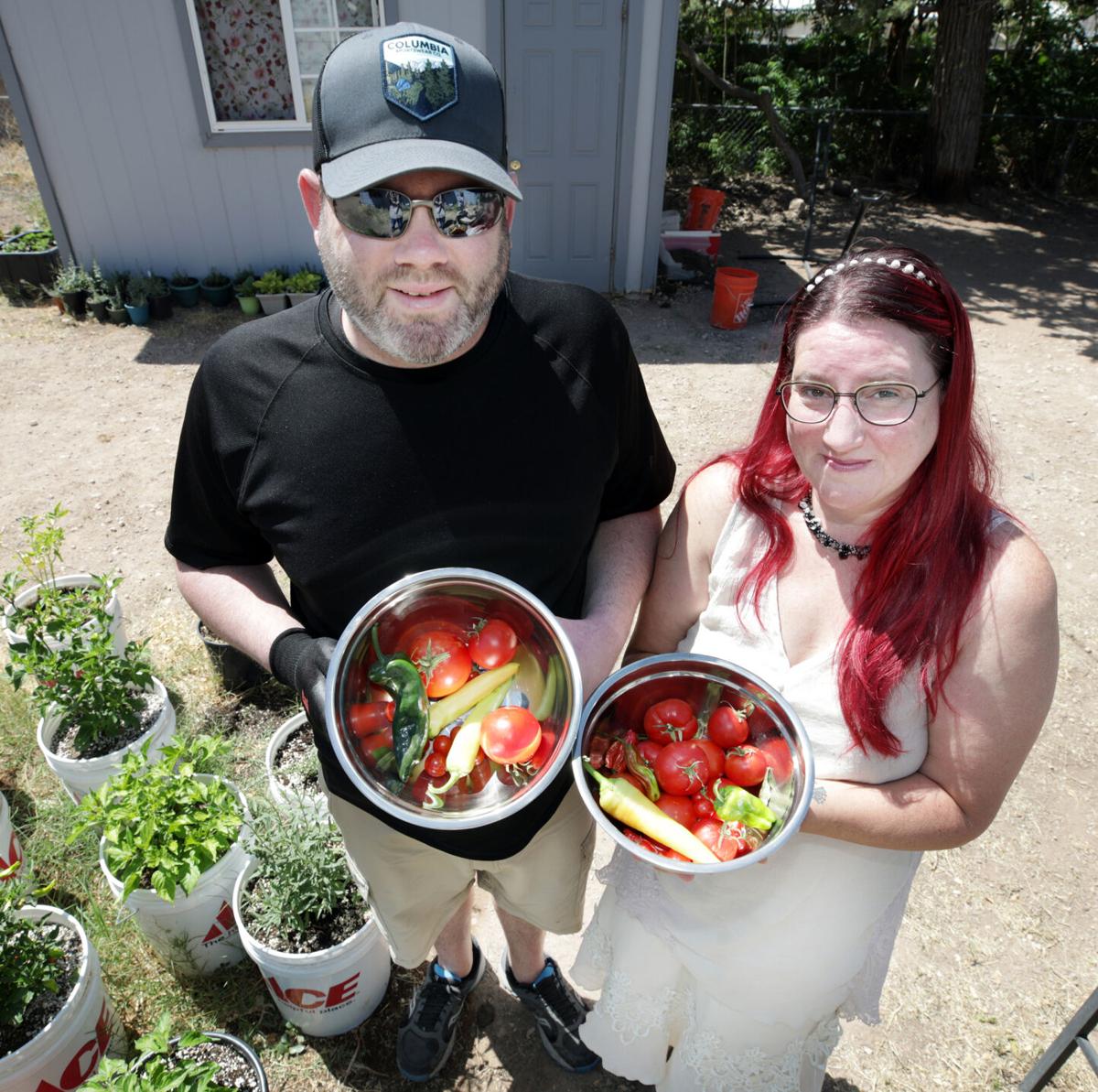 Mike Sheldon and significant other Debra Derossi display some of the harvest they collected earlier this week from their backyard container garden in Bisbee's San Jose district. 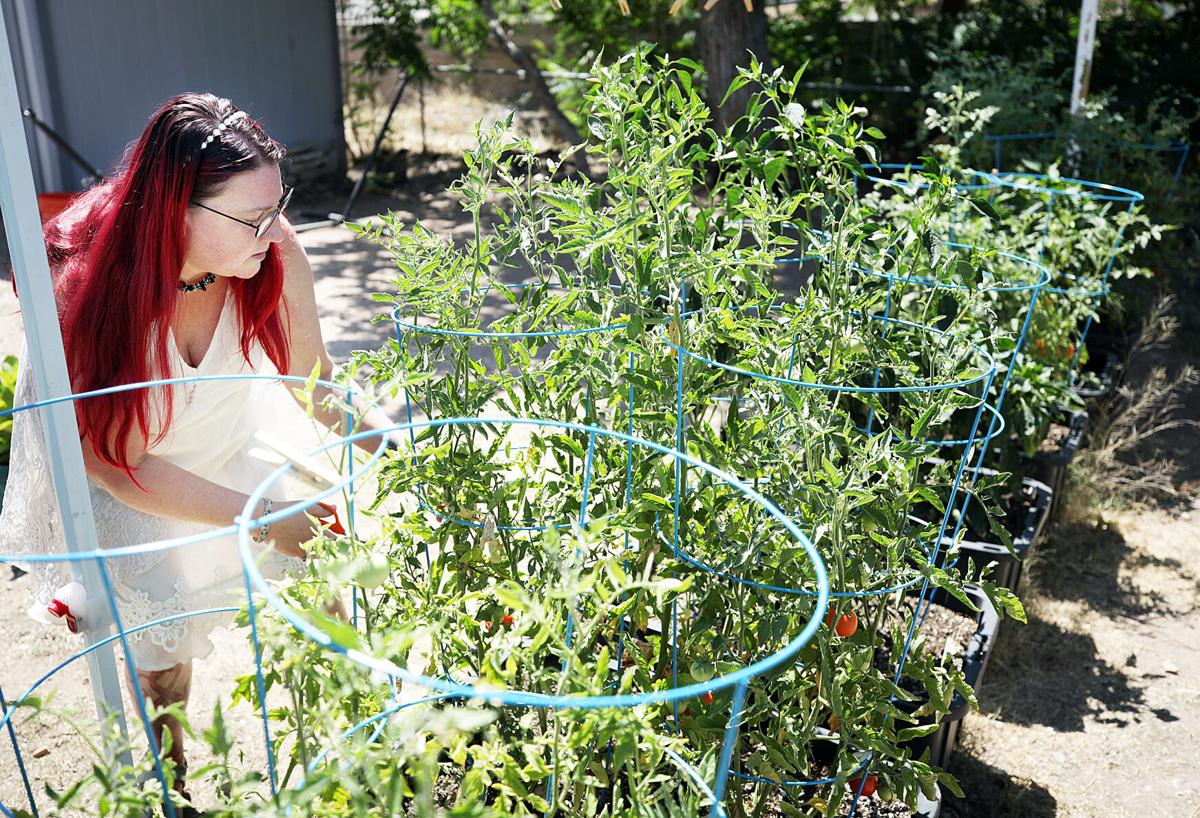 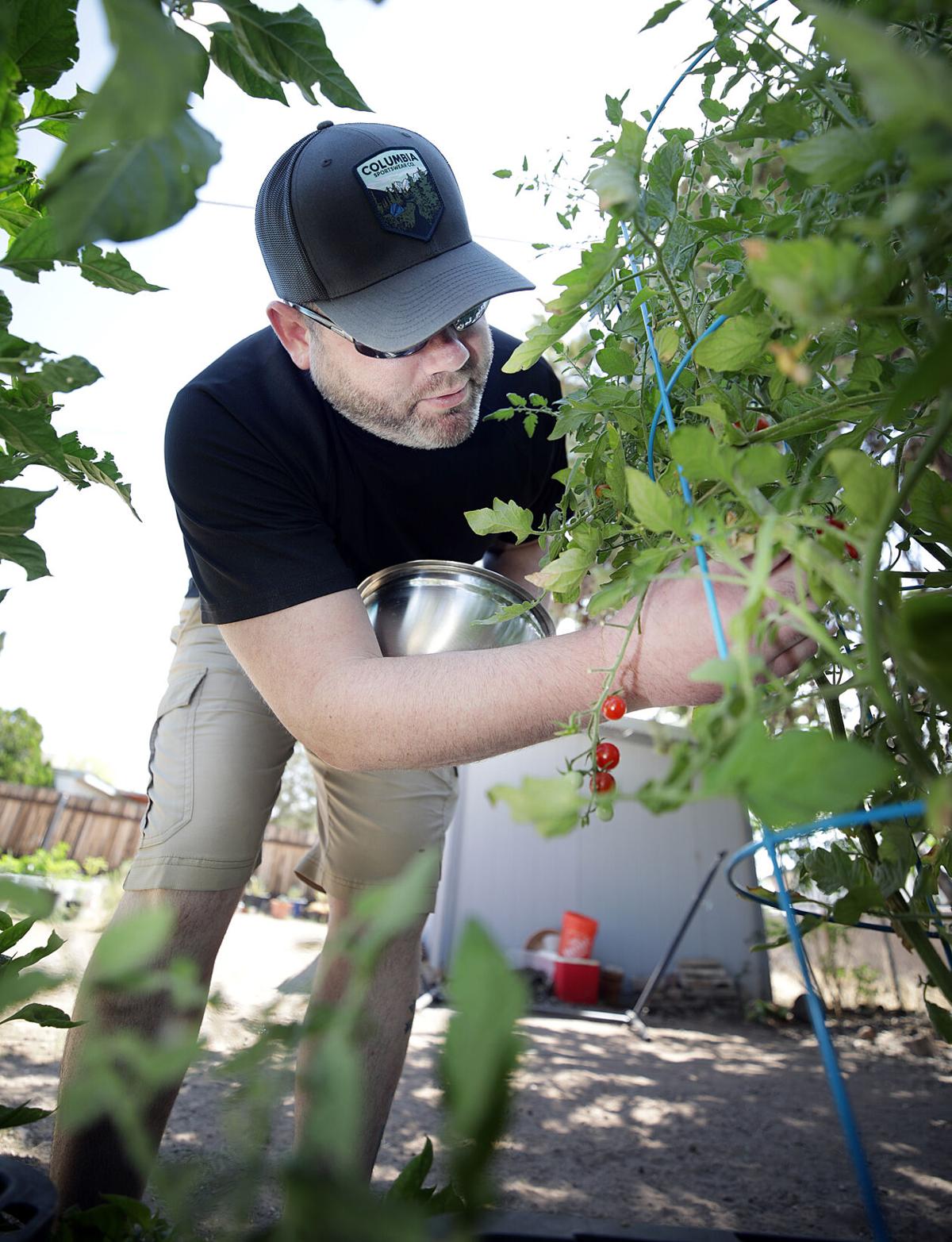 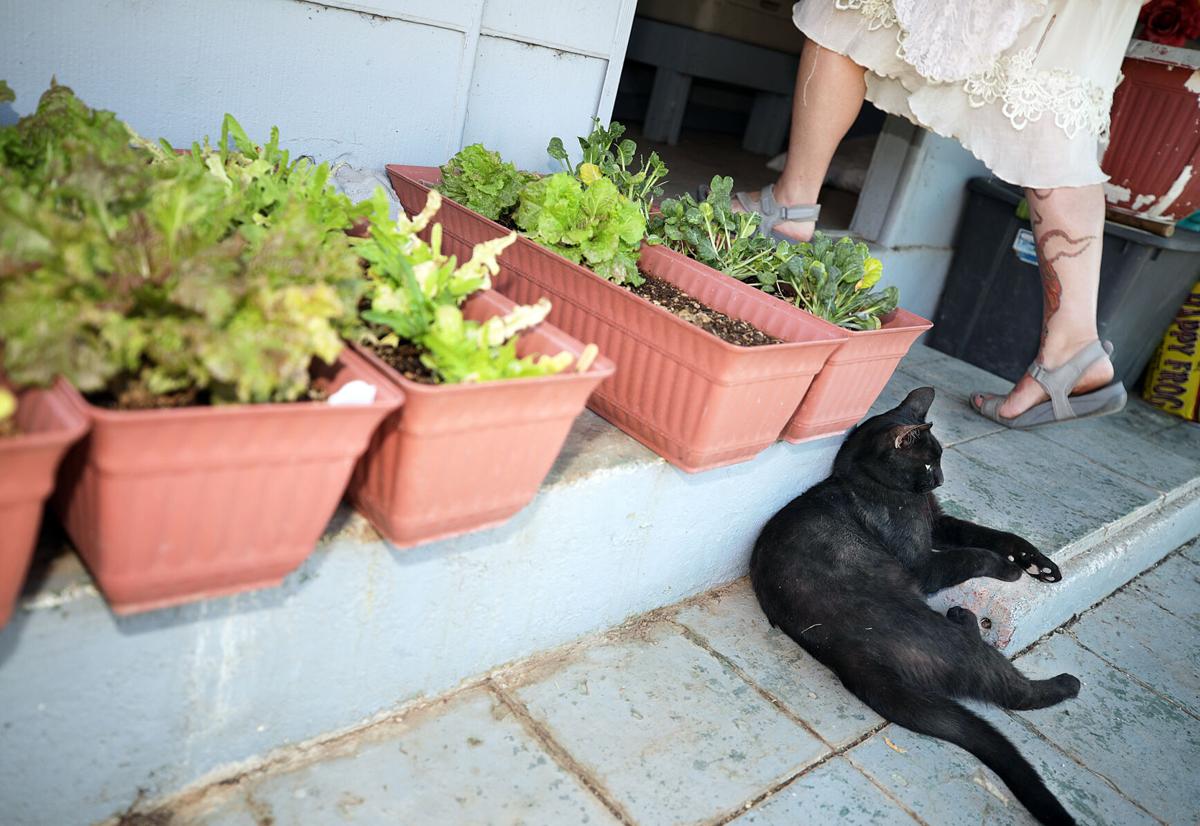 Derossi's and Sheldon’s cat, Shadow, is comfortable resting next to some lettuce.

Mike Sheldon and significant other Debra Derossi display some of the harvest they collected earlier this week from their backyard container garden in Bisbee's San Jose district.

Derossi's and Sheldon’s cat, Shadow, is comfortable resting next to some lettuce.

BISBEE — Imagine walking out your back door and seeing most everything needed for delightful salads and more.

Debra Derossi and Mike Sheldon, who live in the San Jose district of town, have followed a popular trend and now have a backyard filled with lettuce, greens, tomatoes, peppers, watermelon, herbs and more all planted neatly in pots, tubs, buckets and window boxes. Almost ready for the next planting, new seedlings pop up from plastic beverage cups.

Container gardening has become a favorite way to plant in the county, saving back–breaking work digging up the hardened, rocky desert. The containers also save getting down on hands and knees to weed and pick veggies ready to harvest.

For Derossi and Sheldon it is the perfect way to provide the plants they grow with the right amounts of sunshine and shade as the containers make everything mobile.

In window boxes under the shade of the house, delicate lettuce and greens — like chard, red rocket and oak leaf lettuce, mustard greens — continue to produce even through the recent days of extraordinary high temperatures.

Large plastic tubs display an array of slicing and cherry tomatoes and peppers ready for harvest under the shade of a tree.

A chiltepin pepper plant, the only wild native pepper in the U.S., has been thriving for three years in a bucket and the tiny, spicy peppers are forming. Every year it dies back “to a stick,” but sprouts again in the spring.

“The worst part about the chiltepin is the birds love them. As soon as they turn red, they’re gone. They eat the heck out of them,” said Sheldon. “I looked it up on line and supposedly the chiltepin doesn’t burn them like it does people.”

Derossi decided to throw bird seed out in the front yard to appease the winged thieves, which does not always work.

“Our first year growing peppers, we only grew the smaller varieties. This year, we have poblanos going pretty well,” Sheldon said.

On a table were dozens of sprouts in plastic cups of new Hopi yellow watermelon from their seedstock and Blacktail Mountain watermelon from Baker Creek heirloom seeds from Iowa, Sheldon’s home state, which will soon be planted.

Two buckets contain healthy tobacco plants, a new plant they are trying this year. They do not smoke, but Sheldon noted it was a useful plant for insect deterrence. The seeds gathered from them will be used next year since their seed providers do not carry it anymore.

The strawberry plants were somehow still producing berries, though down to a few a day.

All of their produce is grown with seeds from Native Seeds, a nonprofit that provides drought-resistant varieties of plants of the Southwest, and Baker Creek Heirloom Seeds, Sheldon said.

“We’ve had good results with their seeds,” Derossi said.

Sheldon noted, “They grow better. When you buy plants from most places, they are clones. I’ve had good luck producing clones as well, but the theory behind that is they won’t produce as much as a seed will. I guess we could do a side and figure it out.”

They gave Baker Creek’s atomic grape tomato a try this year. It resembles a Roma, but is smaller, multi-colored and looks rather odd. The plant has just begun producing the strange, sweet fruit that can grow from thumb size to plum size.

“It does tend to look like it’s from outer space a little,” Sheldon joked.

Another Baker Creek tomato variety they tried this year was Orange Hat, a tiny tomato plant that produces orange, sweet tomatoes. The plants only get six to nine inches in height and are great for small spaces, even windowsills, Sheldon said.

At one point this year, they had 14 varieties of tomatoes going, but they sold most of them.

Their cilantro, Tuscan blue rosemary, lavender, mint, mammoth dill, pineapple sage and thyme are hanging on, but the heat has taken a toll. They also have goji berry trees that provide antioxidants and have medicinal properties.

Due to COVID-19, things changed this year and some seed varieties are not available, said Derossi. Items the seed companies used to have a few years ago they no longer offer.

There is no drip system for watering, it is all done by hand, said Sheldon.

“I like watering by hand because I know how much water I’m giving them,” he said. “Many container plants can fail due to overwatering or underwatering. So, it’s essential to maintain the right amount of water.”

Rule of thumb is to stick a finger into the soil a few inches and see how dry it is. If it is dry down to the fingertips, it is best to give the plant some water.

At one point they tried cloth bags, he said, but found some plants just do not do as well as those in plastic buckets and tubs.

Rather than buy pots, they prefer to get the five-gallon buckets sold at home improvement or hardware stores and giant, heavy duty plastic tubs. Those containers are also easy to sterilize with hydrogen peroxide or just soap and water.

“It’s extremely expensive to buy pots,” Sheldon said. “That’s why we went to buckets and tubs. The buckets are only $4 and the tubs $15.”

When they lived in McNeal, their dog kept digging up the striped, quadicolor century plant, an expensive cactus, so they decided to put them in pots and brought them on the move to Bisbee.

“Within a year, they doubled in size,” said Sheldon.

Sheldon moved to McNeal from Colorado to help his brother, who was running a farm on a five–acre plot of land that was off the grid and had no water supply.

Derossi moved to the farm with him, but life off the grid was hard. Then came a devastating cucumber beetle infestation that invaded their fields and their rustic home. The crops were lost. It was too hard for Derossi and she wanted to move back to creature comforts.

They looked for properties to rent in Bisbee, “which is really hard,” Derossi said. “We got lucky.”

She moved with one of the dogs to Bisbee and he followed soon after. Sheldon said he couldn’t stand being away from her.

The two met one night in Bisbee. She had moved to Bisbee after a divorce because she could not afford to live in California on her own.

“I traveled around with a friend of mine and we went to Tombstone,” Derossi said. “In Tombstone, they told us about Bisbee. As soon as I got here, I knew this was where I needed to be. And we met two months later.”

Sheldon was working at the Stock Exchange Saloon and Grill one night and couldn’t get home.

“I couldn’t find a ride,” he said. “So, I just went down to Elmo’s for a drink and ended up sitting next to her. We talked for the whole night. I asked her out the next day. I didn’t waste a lot of time.”

They sell some of their young plants to friends and give a discount to those who return the pots, said Derossi. Though they have sold produce and plants at the Bisbee Farmers Market, they stopped as they found employment that prevents them from working weekends.