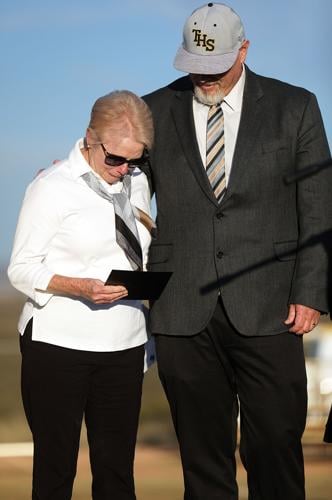 Reading the words from the dedication plaque for her late husband Mike Hayhurst, an emotional Jeannie Hayhurst and friend and Tombstone High Superintendent Robert Devere stand on stage as Friday’s dedication concludes. 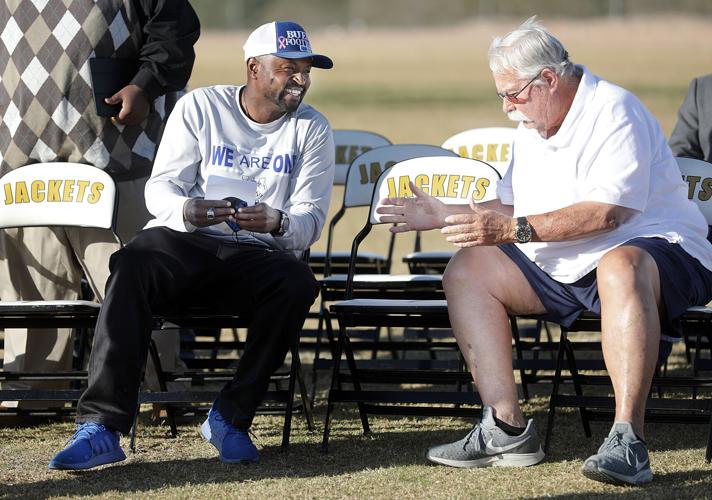 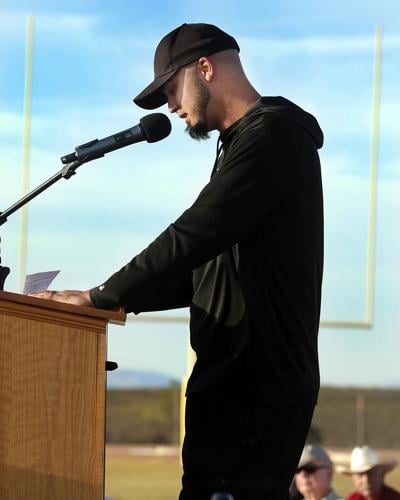 Reading the words from the dedication plaque for her late husband Mike Hayhurst, an emotional Jeannie Hayhurst and friend and Tombstone High Superintendent Robert Devere stand on stage as Friday’s dedication concludes.

Named after Hayhurst in honor of his legendary high school coaching career that stretched over five decades, the dedication ceremony was held Friday amid the high school’s 100th anniversary celebration.

Hayhurst was both a science teacher and football coach whose career took him to Benson, Marana, Mountain View, Casa Grande, Buena and Tombstone high schools, as well as Huachuca City Middle School, where he touched thousands of lives along the way.

In 1988, Mike and his wife of 53 years, Jeannie Hayhurst, bought Brookline Ranch, a small cattle operation near the Babocomari River. Somehow, Mike managed to raise his family and work the award-winning ranch while teaching high school science and coaching football.

He also served on the Upper San Pedro Partnership and was a member of the Hereford Natural Resource Conservation District (NRCD), an organization that promotes environmentally responsible practices.

“The Hayhurst name was synonymous with top teams in Southern Arizona, and he was known throughout the state for his incredible ability to coach football,” Thursby said.

Hayhurst started coaching for Tombstone in 1998 and continued to coach until sometime around 2018 with a couple of brief interruptions through that time.

“The world and certainly Tombstone High School, is a better place because Coach Hayhurst invested his life in students and staff members,” Thursby said. “We will be forever grateful for all that he did for us…”

“I’m happy today about the district’s decision to name this field after Coach Hayhurst,” he said at the dedication. “As a player, he taught me so many good things, and as a coach, I use a lot of things he taught me to this day.”

Tombstone High School’s current head football coach, Dominik Bonilla, played under Hayhurst from 2009 to 2012. He served as an assistant coach under Thomas at Buena High School before accepting the position at THS.

“As I took the job to become the new head coach here, I thought about all the memories Coach Hayhurst and I shared on this field,” he said. “But most importantly, I remember the life lessons he and other coaches taught me throughout high school. I carry those with me every day.”

While Hayhurst no longer has a physical presence at Tombstone’s games, Bonilla said his former coach’s presence continues to be felt.

“He has been here every practice and every game, watching over me along this journey,” he said. “And I’ll always have a special place for him on my sideline.”

In conjunction with the field dedication, the Hereford Natural Resource Conservation District (NRCD) dedicated a bench, plaque and tree to the Hayhurst family, Tombstone High School and Tombstone community. NRCD Chairman John Ladd spoke on behalf of the conservation district. He shared humorous stories about his time on the NRCD with Hayhurst as well as an ongoing rivalry during a time when Ladd helped coach football for Bisbee, while Hayhurst coached the Yellow Jackets.

“Mike was influential in a lot of things that BLM ended up doing, and he was still fighting with him until the end,” said Ladd, who added, “People admired that. Mike was well respected in the Bureau of Land Management.”

When he stepped up to the podium, Daman Malone, another former THS football player, said, “To reflect on Coach Hayhurst is monumental. You can’t say enough good stuff about Coach Hayhurst...He was a giant among men. He was a giant in Southern Arizona football...I can’t think of anything he would like more than having a football field dedicated to him. “I’m so happy that Tombstone High School has decided to honor coach in this way.”

Curt Lybeck, a former assistant football coach who worked with Hayhurst at Benson and Marana high schools, spoke of Hayhurst’s devotion to the players, and how he would advocate for kids when they got into trouble. Always putting kids first, he remembers Hayhurst as someone who opened his home to students who needed a place to stay.

TUSD Superintendent Robert Devere presented a moving reflection of Hayhurst’s dedication to THS and the kids he taught and coached.

“From the day Mike walked into this district he was dedicated to the the black and gold. He coached, taught, mentored, installed irrigation, fixed equipment and became a safe place for so many,” he said. “Many of his years as coach were for no pay because he also served as a board member. It wasn’t ever about the money, it was about the kids.”

While serving on the school board, Hayhurst advocated for all kids, Devere said.

“He always spoke up for those who were not the top scholar, or athlete,” he said. “The kids who just did not fit in all the time held a special place in Mike’s world, and he always made sure they felt welcome.”

Fighting back tears, Devere shared a conversation he had with Hayhurst in the final week of his life.

“In his last week, he told me about the reasons he was such a fortunate man,” he said. “His loving family, he spent his life teaching and coaching kids, and he always had plenty of horses to take him to some of the most spectacular places in the world. Friends would go with him on those trips.

Rick Shelley, TUSD board president, also spoke of Hayhurst’s focus on kids and the effort he put into building the football field for their benefit.

“It’s been my honor to know Mike, and very quickly, he became one of my heroes,” Shelley said. “Mostly because of his principles, leadership and sincere compassion.”

During his time on the school board, Shelley said that he and Hayhurst had numerous talks about about the school district and the students that were so important to him, including their challenges and opportunities the district provided.

“We probably wouldn’t be on this field if it hadn’t been for Mike,” Shelley said. “After this new school was built and there was no money for a football field, Mike gathered up equipment, football players and other volunteers to make one.

“He didn’t do it for any other motivation than to provide a field for his student athletes to play on. That was Mike. I’m honored to be part of this dedication and I’m so happy and appreciative that this field is being named after Mike Hayhurst.”

The ceremony concluded with TUSD board vice-president Keith Guin presenting a plaque to Jeannie Hayhurst and her three children, Pat, Teri and Jenna, along with the Hayhurst grandchildren.

“What I’ve learned from Mike over the last eight years is he had a knack for understanding what was needed and focused on that need,” Guin said. “We are super proud to present this to his family in honor of Mike.”

In accepting the plaque, Mike’s son, Pat Hayhurst, spoke on behalf of the family.

“As I reflect on the great honor bestowed on our family and the legacy of the legend, Mike Hayhurst, I find it very fitting that this town and this county in Arizona would honor him in this way,” he said. “Tombstone is a town of legends, the town too tough to die. My dad was too tough to die, and he will live on forever.”