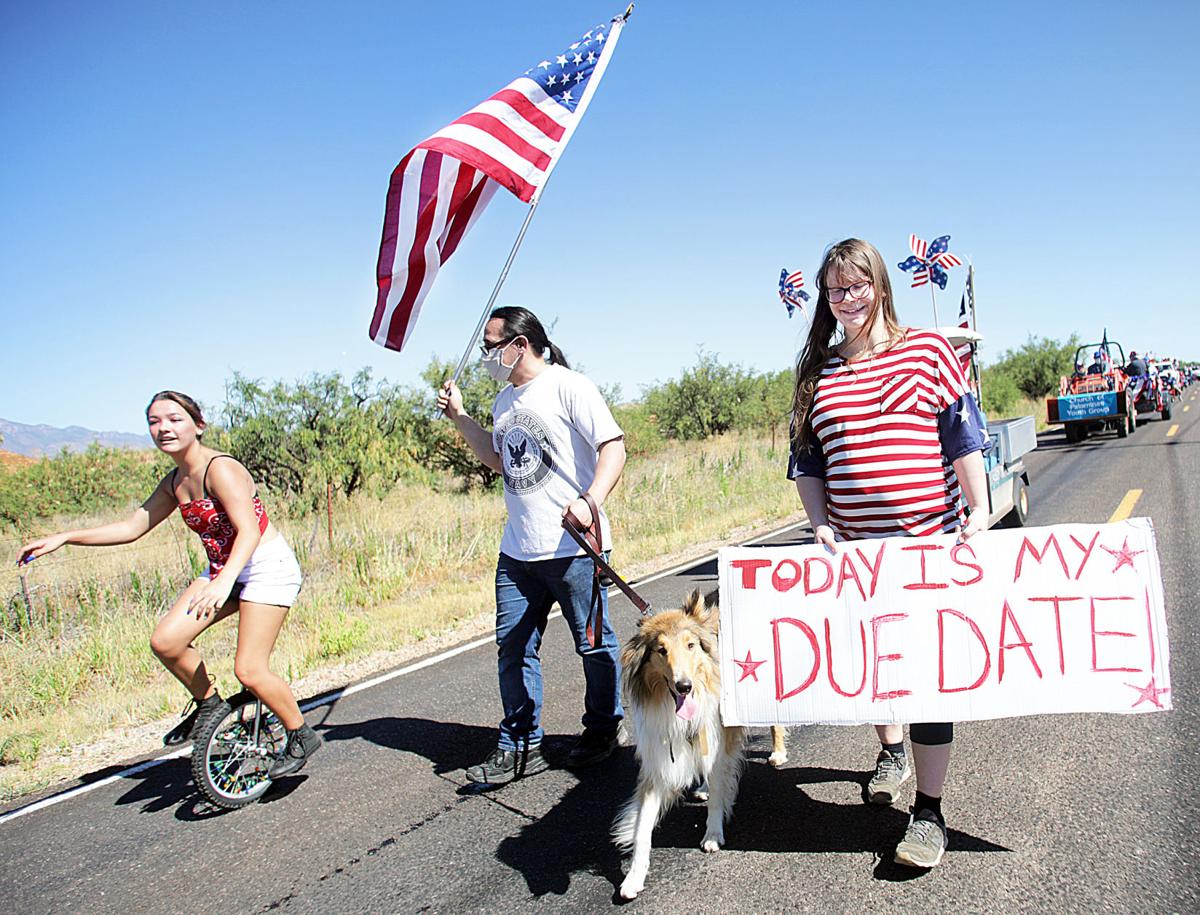 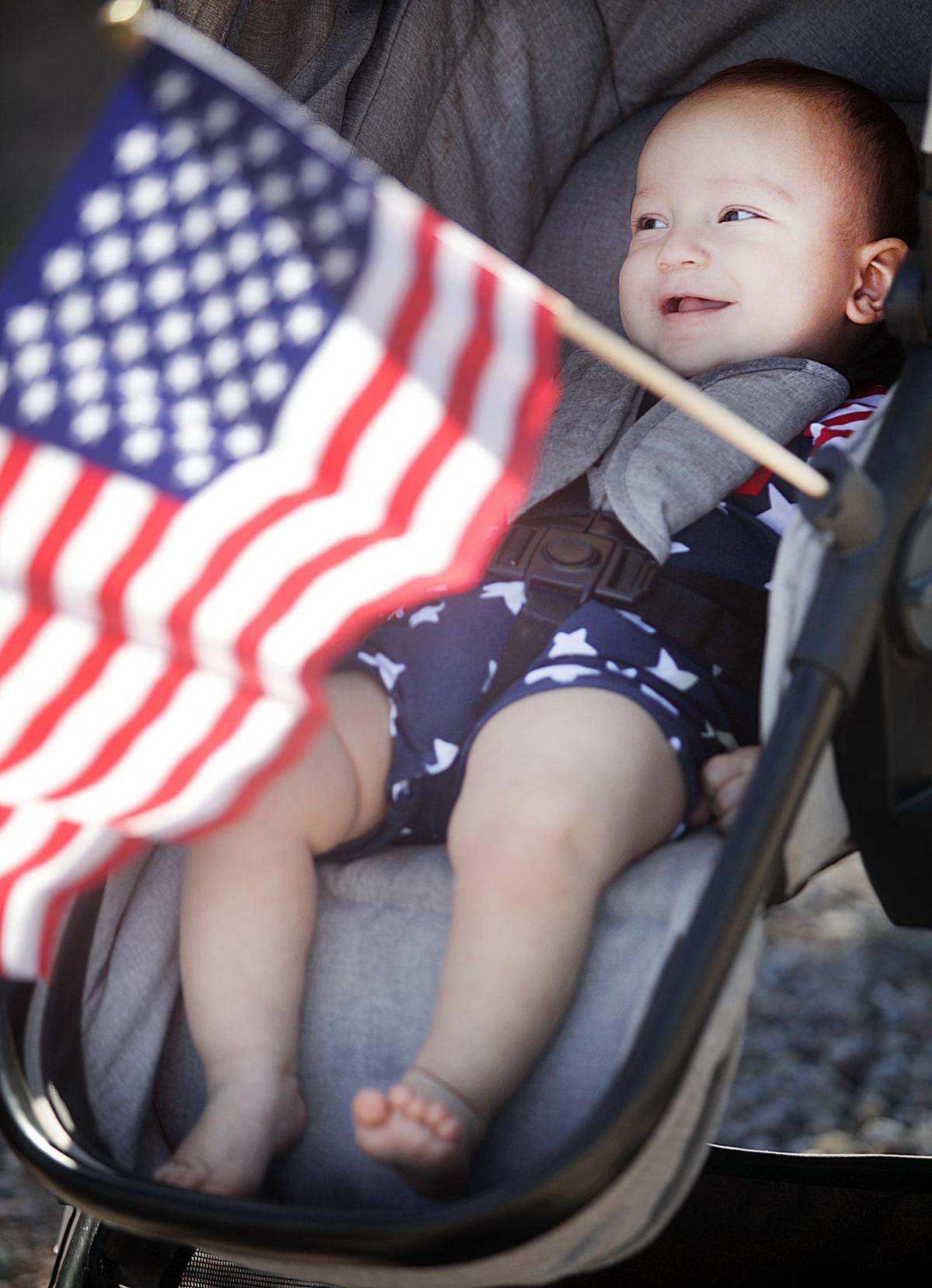 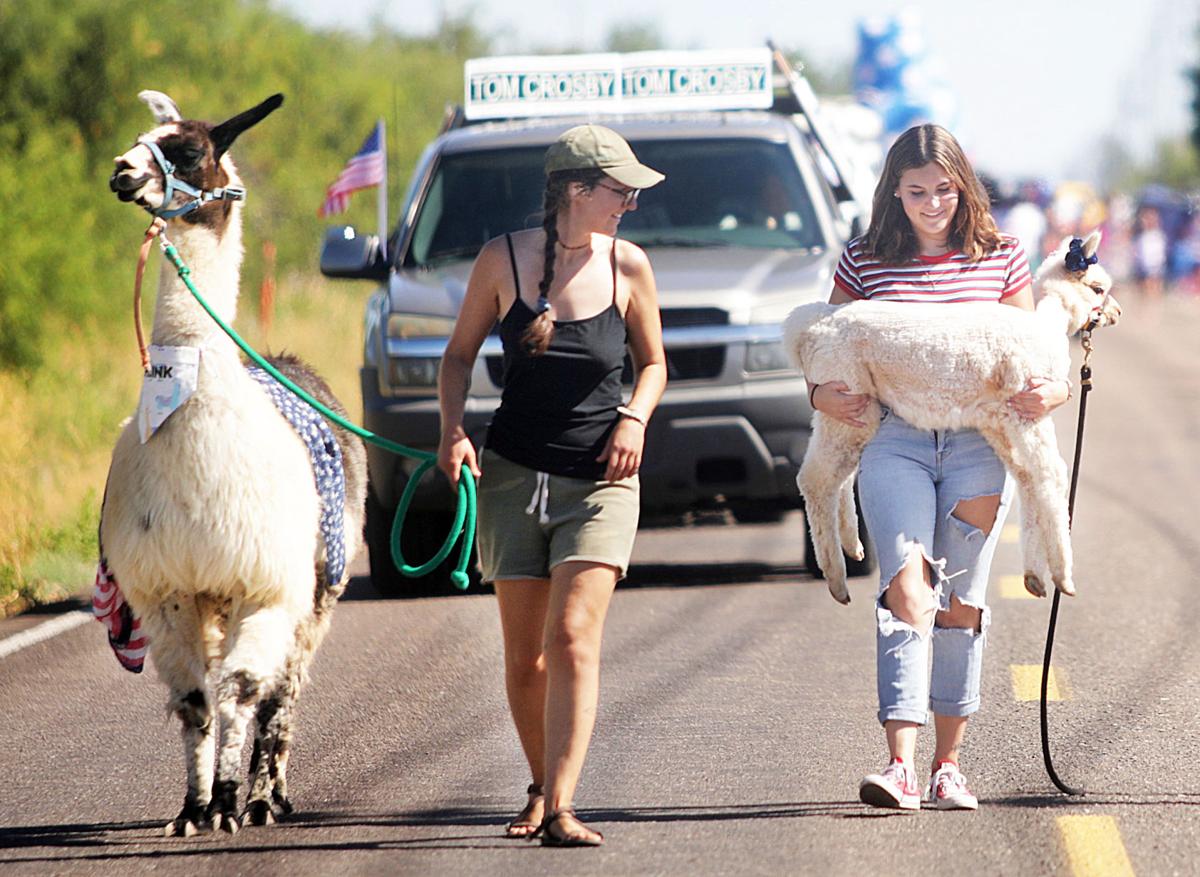 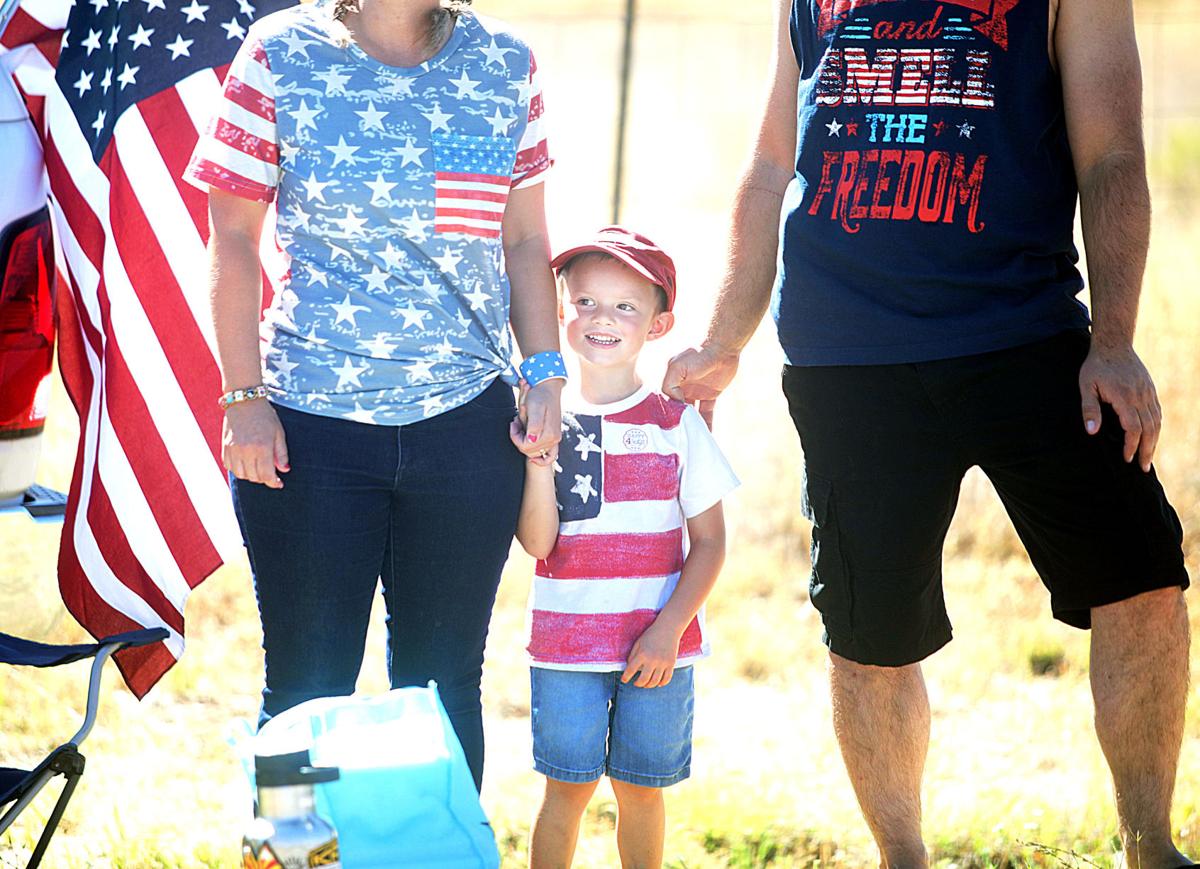 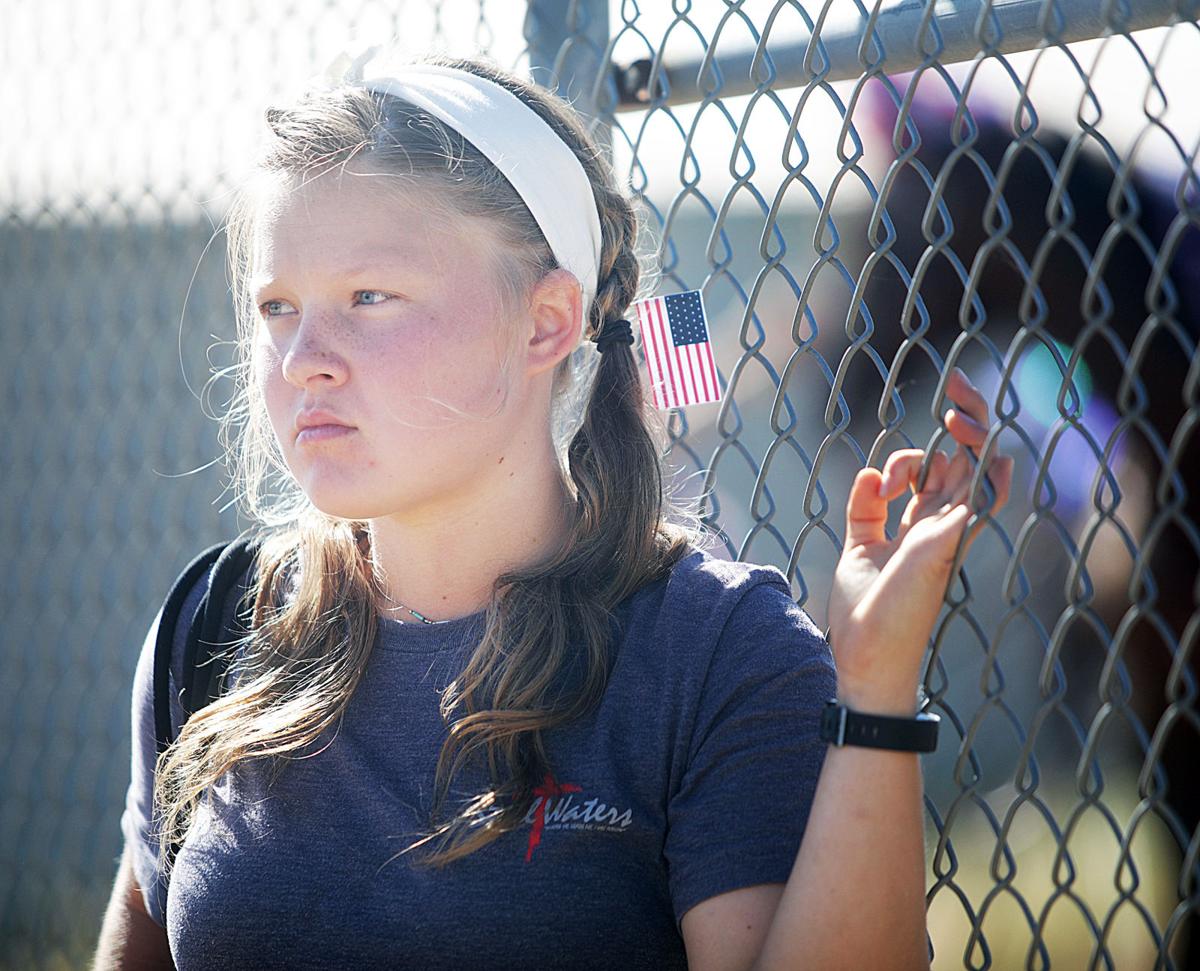 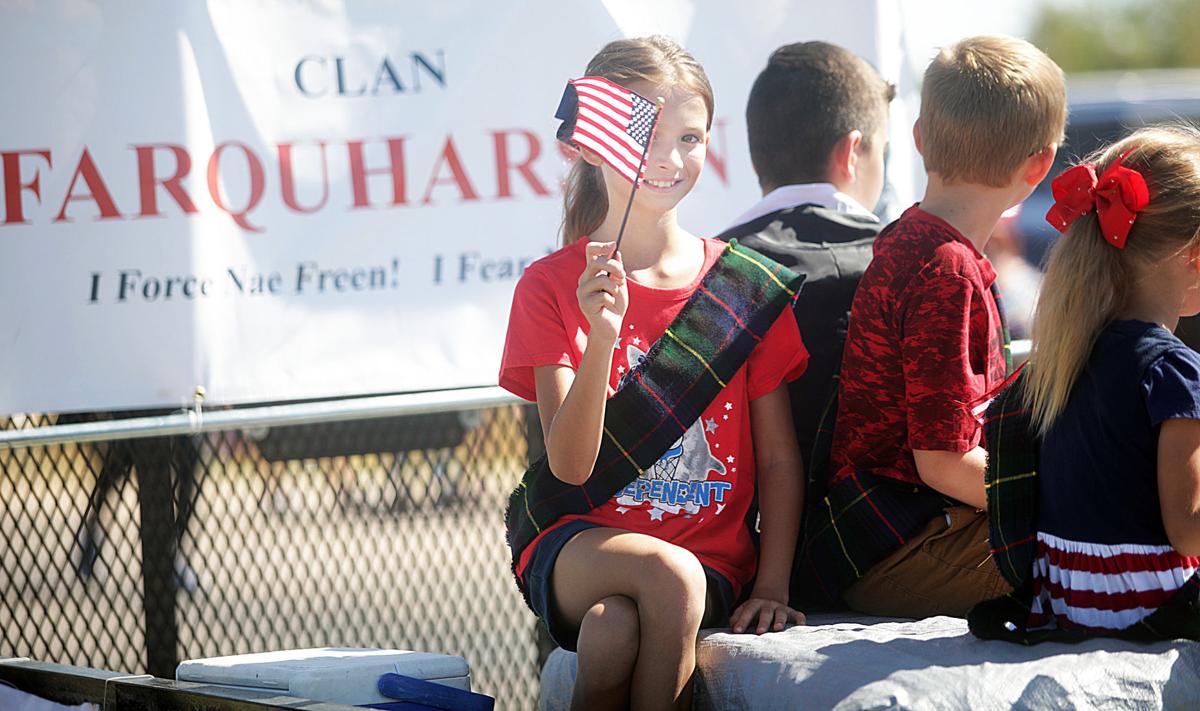 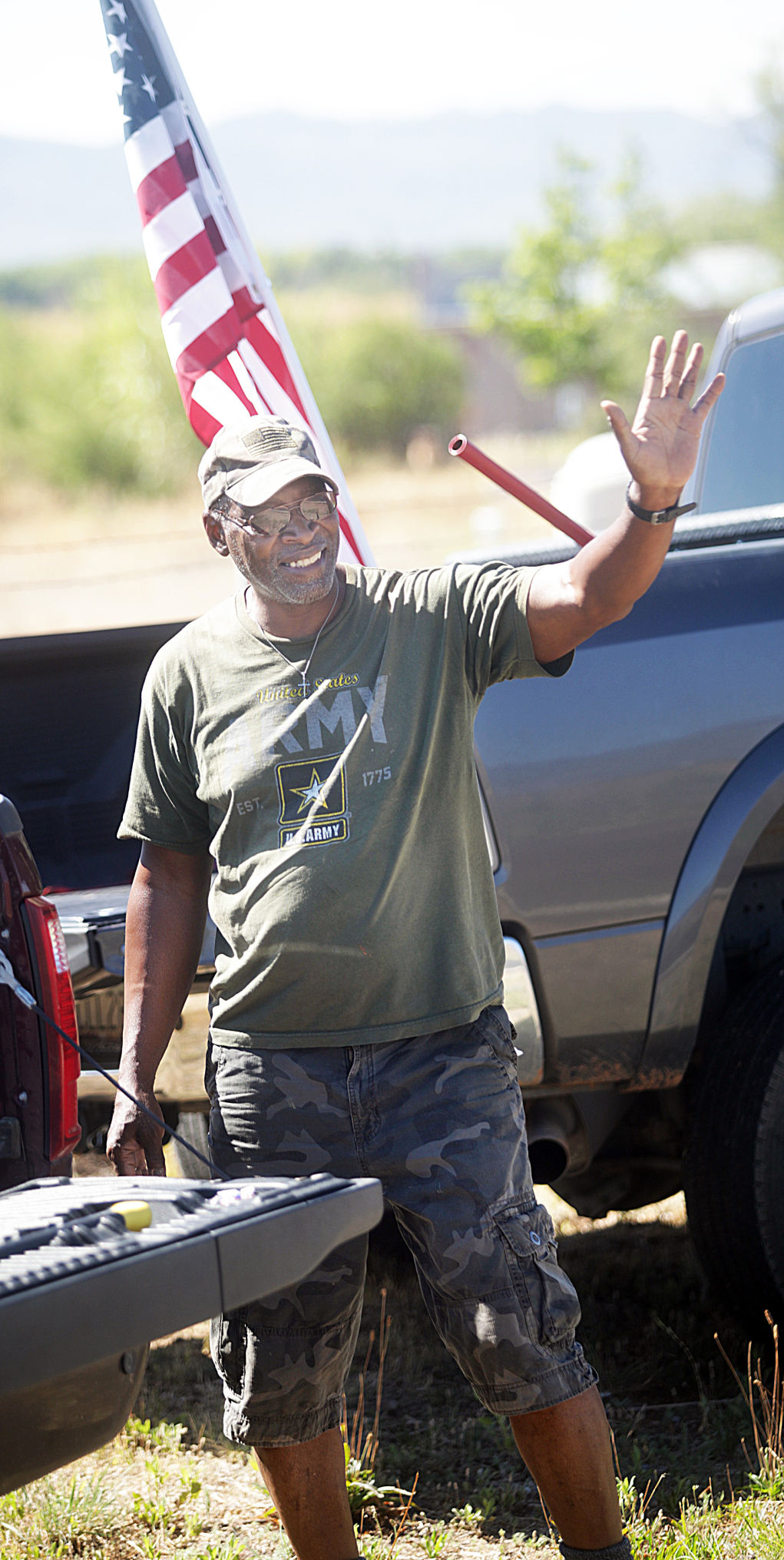 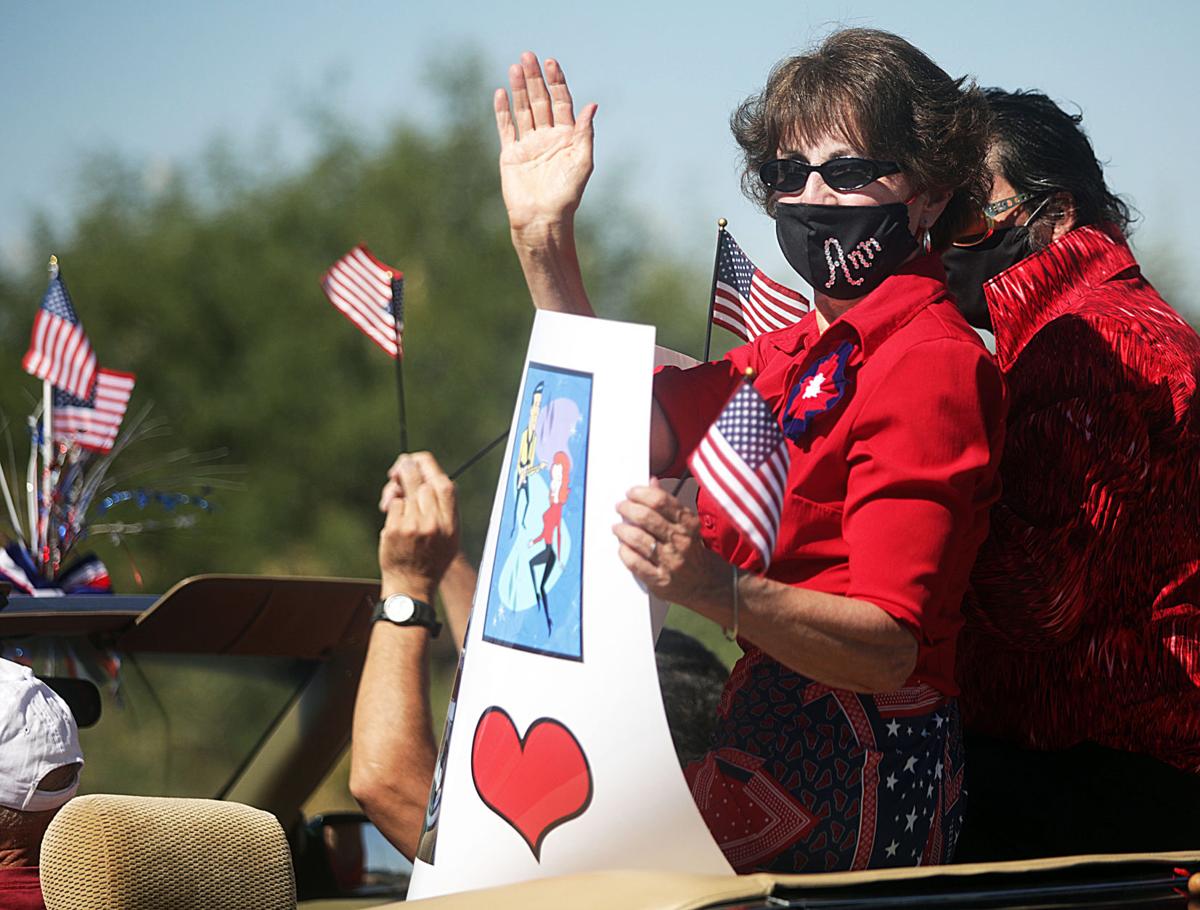 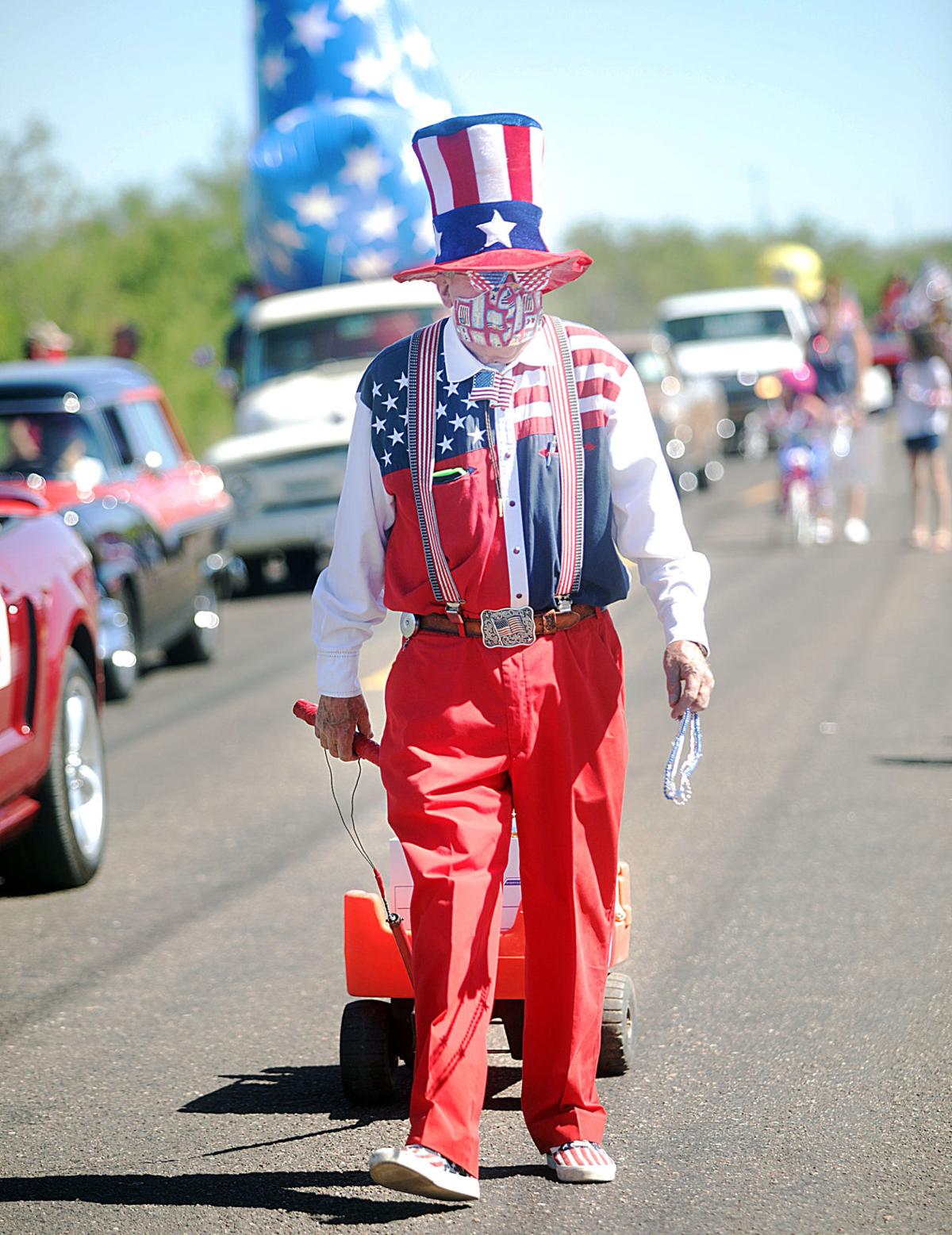 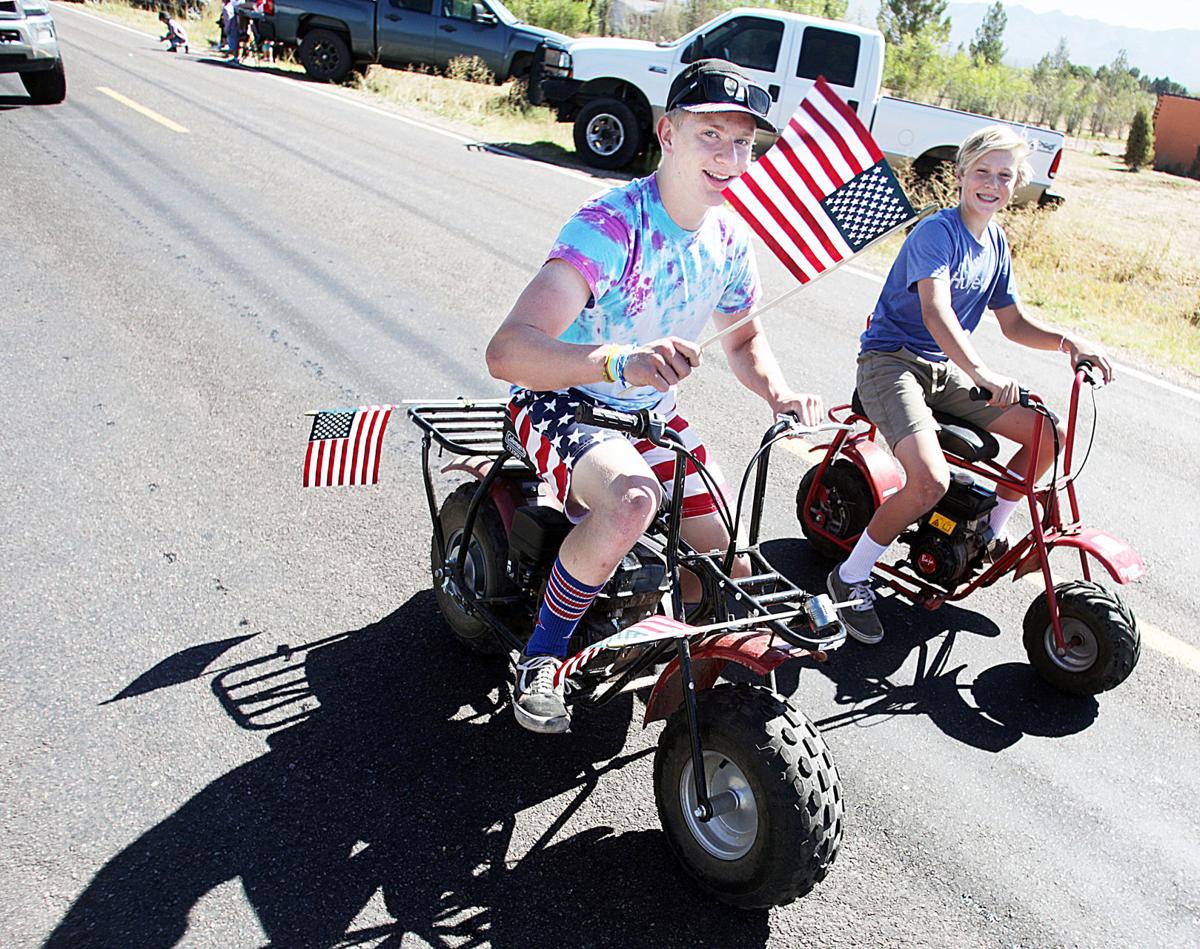 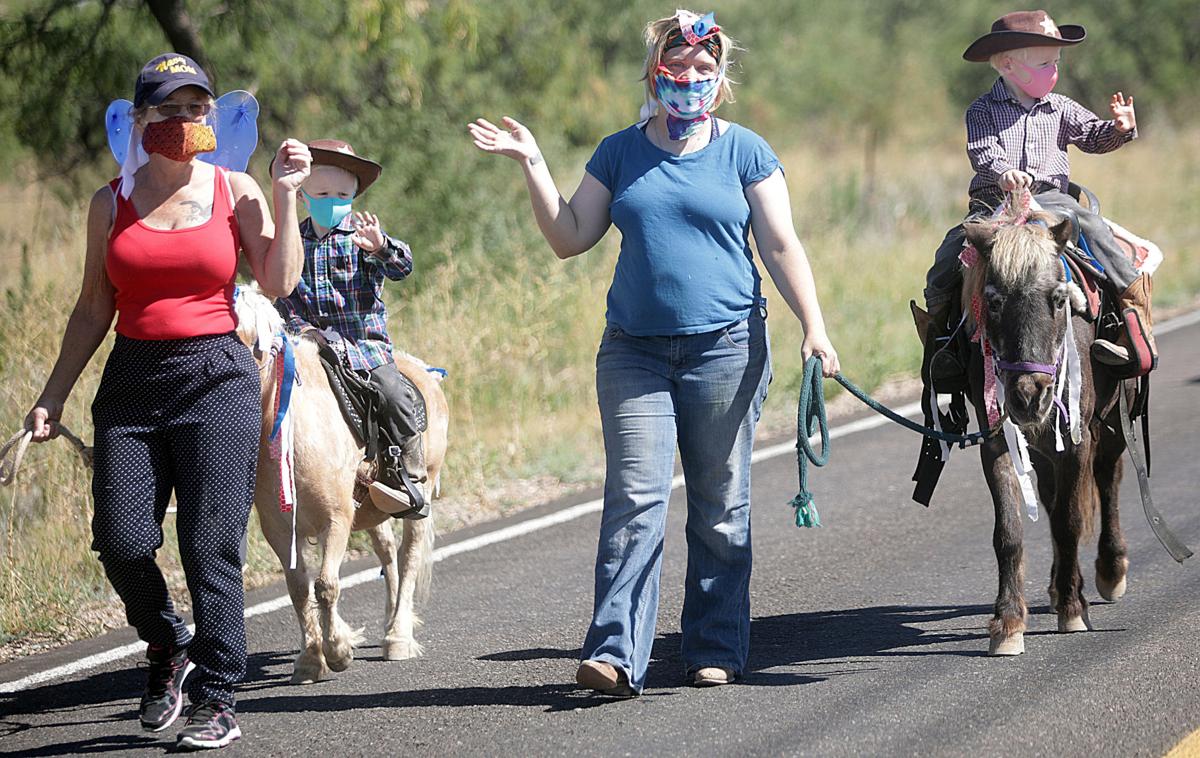 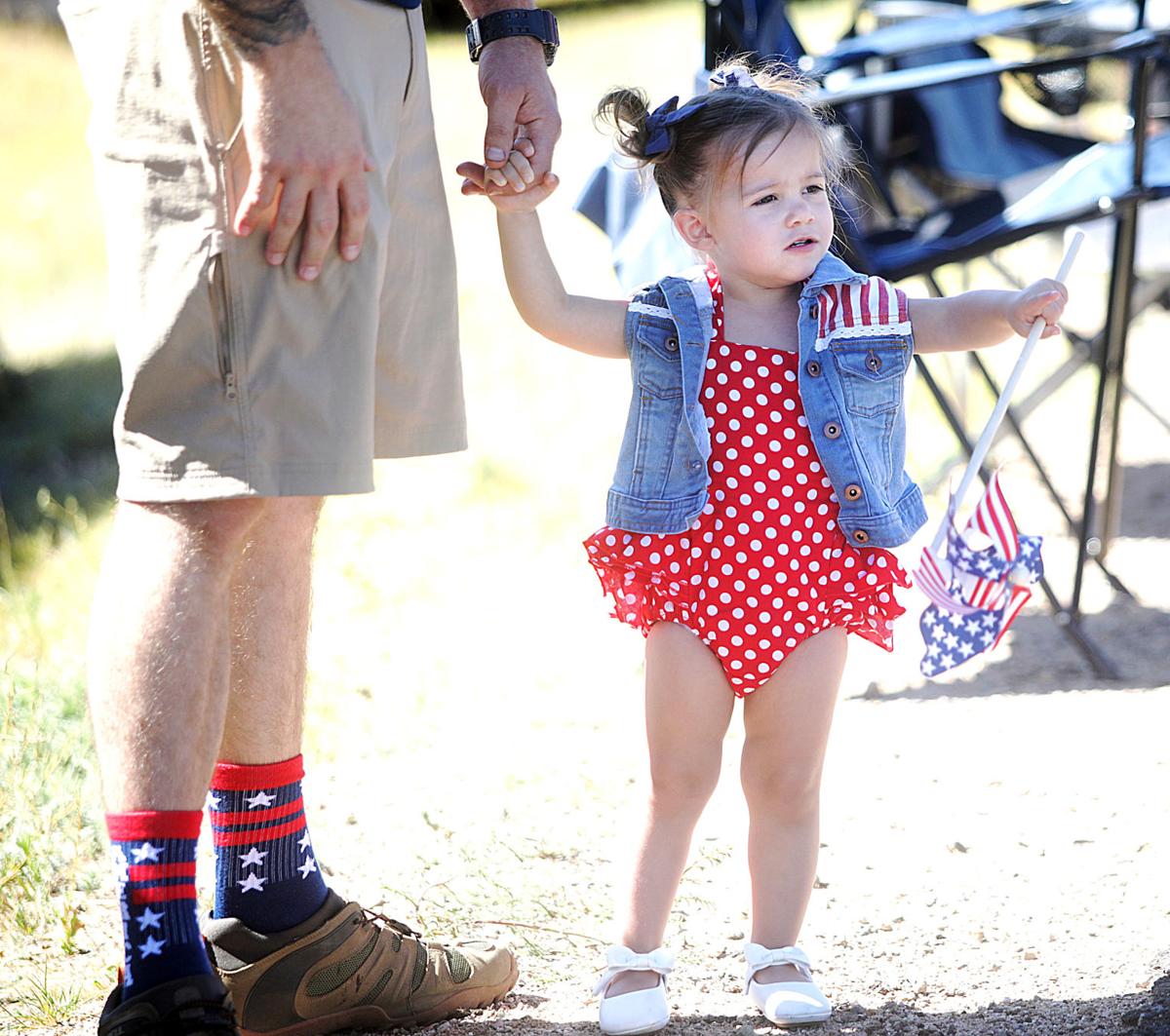 PALOMINAS — Fourth of July in Palominas kicked-off Saturday morning with a patriotic parade of red, white and blue, where flag waving youngsters and adults lined both sides of Palominas Road.

Hailed by locals as “the only game in town” because of COVID-related cancellations, this year’s Palominas Unorganized Parade drew nearly double the number of entries from the community’s past July 4th parades. While no one seems to know for sure when the unorganized parade started, locals guess it was sometime in the 1980s, started by owners of a now-closed restaurant.

Victoria Rose Van Kirk, who grew up in the Hereford area, attended Saturday’s event with her 10-month-old baby, Angel Rose.

“This is her second parade,” Victoria Rose said of the dozing baby. “I brought her with me to the Palominas Unorganized Christmas parade when she was around 3-months-old, so I’m starting a parade tradition with her early. I’ve been attending both parades — the Christmas and Fourth of July — since I was in fourth-grade, and I’m 20 years old. I plan to bring Angel Rose to all the parades. They’re always a lot of fun and make a great family tradition.”

“I’ve seen them in other parades here, and I think they’re awesome,” spectator Brenda Heywood said. “They’re a great way to start the parade, and different from the typical color guard groups we see.”

Ponies, proud parents and politicians comprised a big part of the entries, along with classic cars, and a smattering of floats, vintage tractors and trucks.

Always a crowd pleaser, a massive Clydesdale team pulling a wagon full of people made an awesome contrast against riding horses and ponies.

Hereford residents Jack and Jan Bauer with their collies waved to the crowd as they walked down the parade route, while Queensland heelers and retrievers gazed out from their perches in trucks and RZRs. Nearly all the entries were decorated with red, white and blue.

Four-year-old twins Jasper and Kai Johnson sat tall in the saddle, one on a miniature horse, and the other on a Shetland pony.

The Tombstone High School JROTC mounted unit is one of the parade’s regular entries every year.

“I have two grandsons in this parade who are with the Tombstone High School JROTC mounted unit,” said Sierra Vista resident Carla Warner. “This is the first time I’ve attended this parade, and I’m glad they decided to hold it. So many events have been cancelled, and it’s very disappointing for everyone.”

“The Facebook posts went out to hundreds of people, and there were no negative comments at all. Everyone was excited about the parade, and we had tons of likes,” she said.

Out of curiosity, Sneary also kept track of the number of entries, something that isn’t typically done.

“We’re estimating we had around 48 in the Christmas parade, and today we had 78 entries,” she said. “The number is up by a lot, but there really isn’t anything else going on today, other than the fireworks displays this evening.”

A stately llama named “Big Hunk” was one of the parade hits.

“I like all the old cars and rucks, but I really liked the llama,” said 10-year-old James Kindrick. “I think he’s pretty cool.”

Another youngster, Nicholas Lewis, is in the area from Utah for the summer, visiting family.

“I liked the parade a lot, especially all the animals,” he said. “The horses were my favorite, though. We’re glad Palominas decided to have the parade.”

Those comments were echoed by several spectators.

Bob and Nancy Rasmussen of Hereford said they attend the parade every year, and have even been participants in past years.

“It’s always a fun parade and draws a lot of spectators,” said Nancy. “This year’s Palominas Unorganized Parade is the only thing going on, other than fireworks. I’m glad they kept the tradition going and didn’t cancel it.”