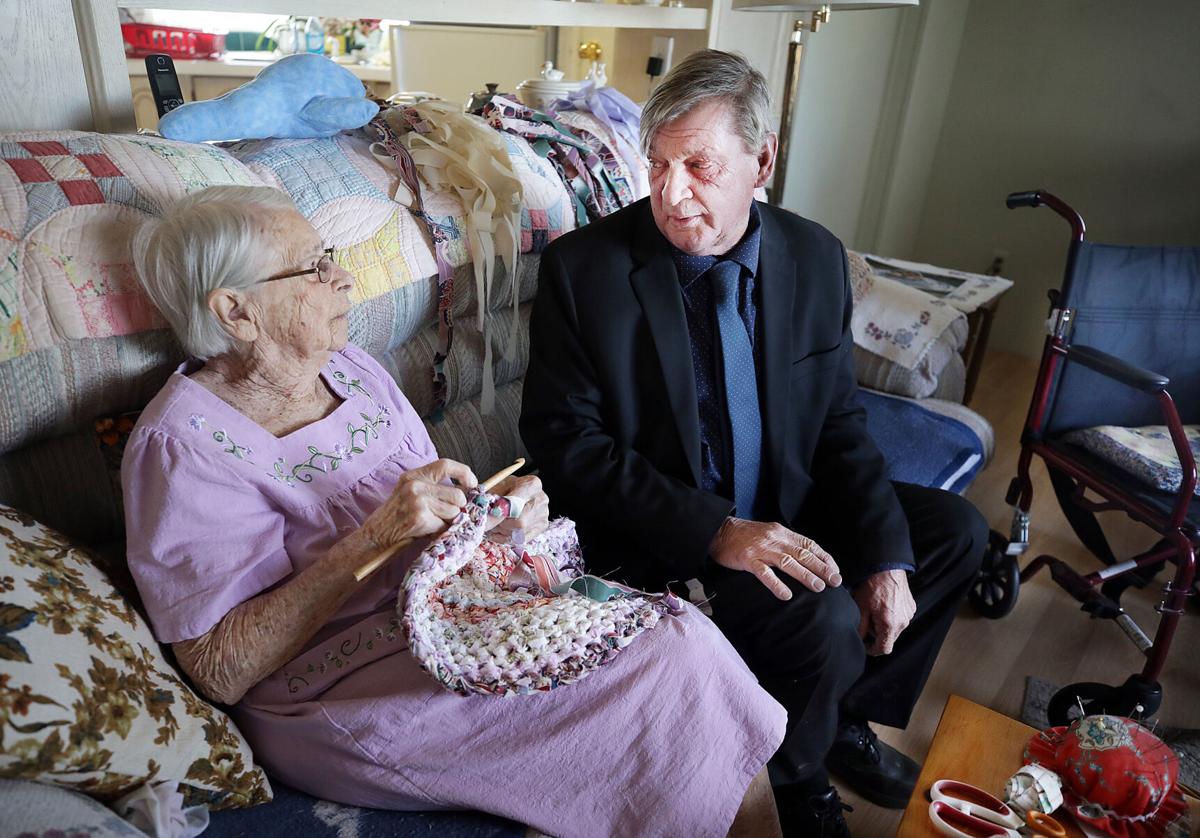 Pearl O’Neill chats with her youngest child, Aaron Parr, during a visit this week. Parr and an assorted mix of O’Neill's good friends frequently stop by her home to help with various tasks she may need assistance with. 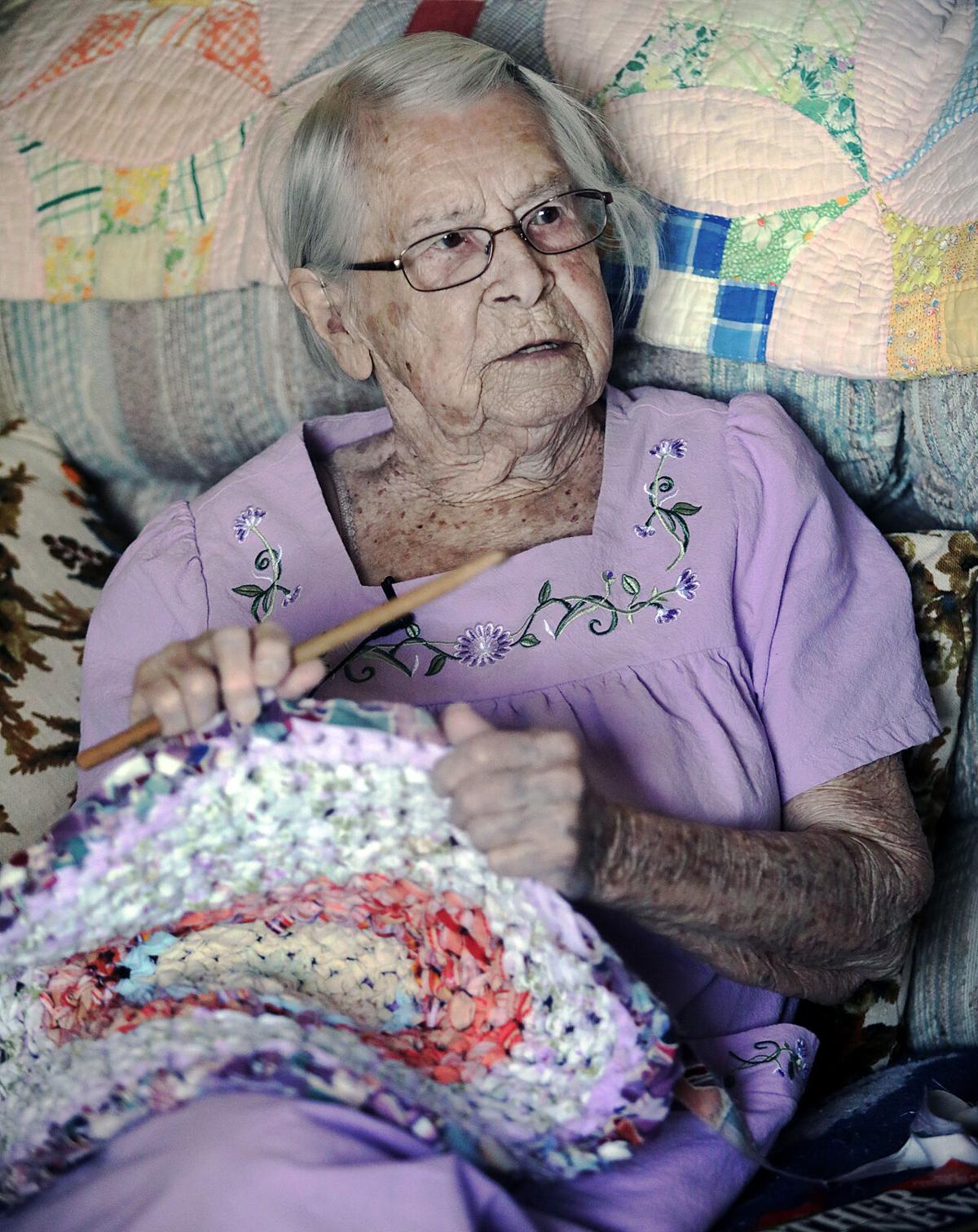 Pearl O’Neill prepared nearly all her food with fresh fruits and vegetables that she raised in her garden. Now unable to garden, friends bring meals to her. Pearl attributes her longevity to healthy eating. 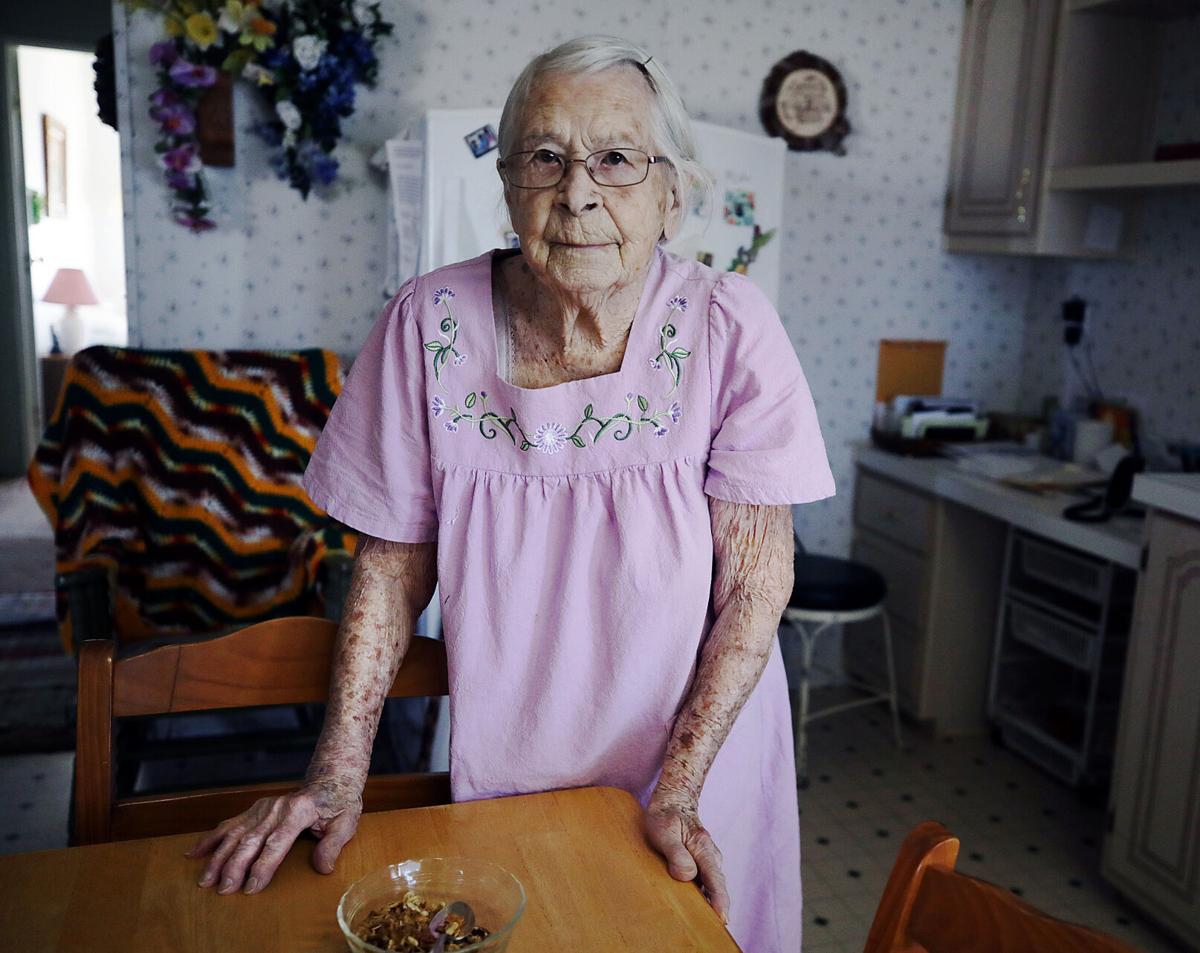 Pearl O’Neill chats with her youngest child, Aaron Parr, during a visit this week. Parr and an assorted mix of O’Neill's good friends frequently stop by her home to help with various tasks she may need assistance with.

Pearl O’Neill prepared nearly all her food with fresh fruits and vegetables that she raised in her garden. Now unable to garden, friends bring meals to her. Pearl attributes her longevity to healthy eating.

SIERRA VISTA — When Pearl O’Neill turned 80, she announced she would be around to celebrate 10 more birthdays.

That was 25 birthdays ago.

Today, at 105, O’Neill smiles when she talks about her plans for “another 10 years.”

Born Feb. 16, 1916, this centenarian attributes her longevity to a lifetime of healthy eating through food that she has grown and preserved.

“Throughout most of my life, I’ve eaten chemical-free foods that I raised myself,” she said. “I’ve always loved gardening and enjoyed the fresh fruits and vegetables that my gardens produce.”

Mobility issues forced O’Neill to stop gardening two years ago, but she manages to stay busy with crocheting and needlepoint projects.

Raised on a family farm in New Jersey, O’Neill was the second of six children.

“We were quite poor, but because of the farm, we always had everything we needed, even during the Great Depression when other families were struggling to put food on the table,” O’Neill said as she recalled life a century ago. “We learned how to grow, can and put up our food, take care of farm animals, and cook and sew at a very young age. When I look back at all the things I learned while I was young, I’m thankful I have these skills. I’ve used them throughout my life.”

O’Neill started milking cows by the light of a kerosene lantern when she was 8 years old.

“Along with the cows, we had chickens and pigs,” she said. “I had four brothers and one sister and we all helped on the farm and learned how to raise the food we needed. We had an apple orchard, so we canned lots of applesauce and apple butter.”

Raised without electricity or indoor plumbing, the family took baths by heating water in a tub on a large wood-burning stove.

“Mother made all of our clothes. Our underclothes were made from flour bags and our shirts and dresses were made of feed bags.”

When O’Neill moved to Arizona in 1974, she immediately planted a garden and continued raising her own produce. Today, she lives on acreage off Moson Road in Hereford where her once-flourishing garden is no longer being planted. O’Neill’s son, Aaron Parr, lives on the property with her and checks in on his mother often. While friends and caregivers drop by to help her with day-to-day needs, O’Neill is relatively independent.

“I fell and broke my hip when I was 97 and was told I would never walk again, but I took that as a challenge,” she said with a defiant smile. “I not only walked again, but started gardening. I just did it at a slower pace.”

She enjoys writing, and several of her articles have appeared in the Herald/Review through the years. In 2017, one of O’Neill’s articles — Eating From Jars — was published in the August/September edition of Mother Earth News, a national magazine that has been in publication since 1970.

“I was so pleased when I saw my article in one of my favorite magazines,” said O’Neill, who is an avid reader. “I was mentioned in the magazine a second time when someone commented on my article.”

O’Neill is co-founder of the Sierra Vista Area Gardeners’ Club, which got its start in 1991. At the club’s 25th anniversary celebration in 2016, she was recognized for her contributions to the local gardening community through a proclamation by Sierra Vista Mayor Rick Mueller.

One of O’Neill’s greatest joys is working with children. For 17 years she volunteered at Huachuca City School where she taught young people how to garden, crochet and sew. She is still remembered today by many of those now-grown children whose lives she touched.

“I’m still teaching people how to garden, but I do it by writing handouts,” she said. “I write about mulching, natural remedies for keeping rabbits and bugs from the garden and I write gardening tips.”

For years, she has been sewing stuffed frogs that she gives to local fire departments for children who are going through traumatic times such as house fires or accidents.

“Pearl’s magic frogs calm distraught children while riding in ambulances or going through a traumatic event,” Parr said of his mother’s frogs. “She’s been awarded the fire chief’s challenge coin for all the time and effort that she’s put into making these frogs. I got the first one she made after she turned 100.”

On her 105th birthday, in a world where COVID prevented social gatherings, O’Neill received more than 100 birthday cards from Huachuca City, Coronado and Fort Huachuca school children, as well as from people from all over the country.

“A good friend announced my birthday on Facebook, and when people saw it, the cards started coming in. I loved reading all the messages and wonderful birthday wishes,” O’Neill said. “Those cards made my 105th birthday very special.”