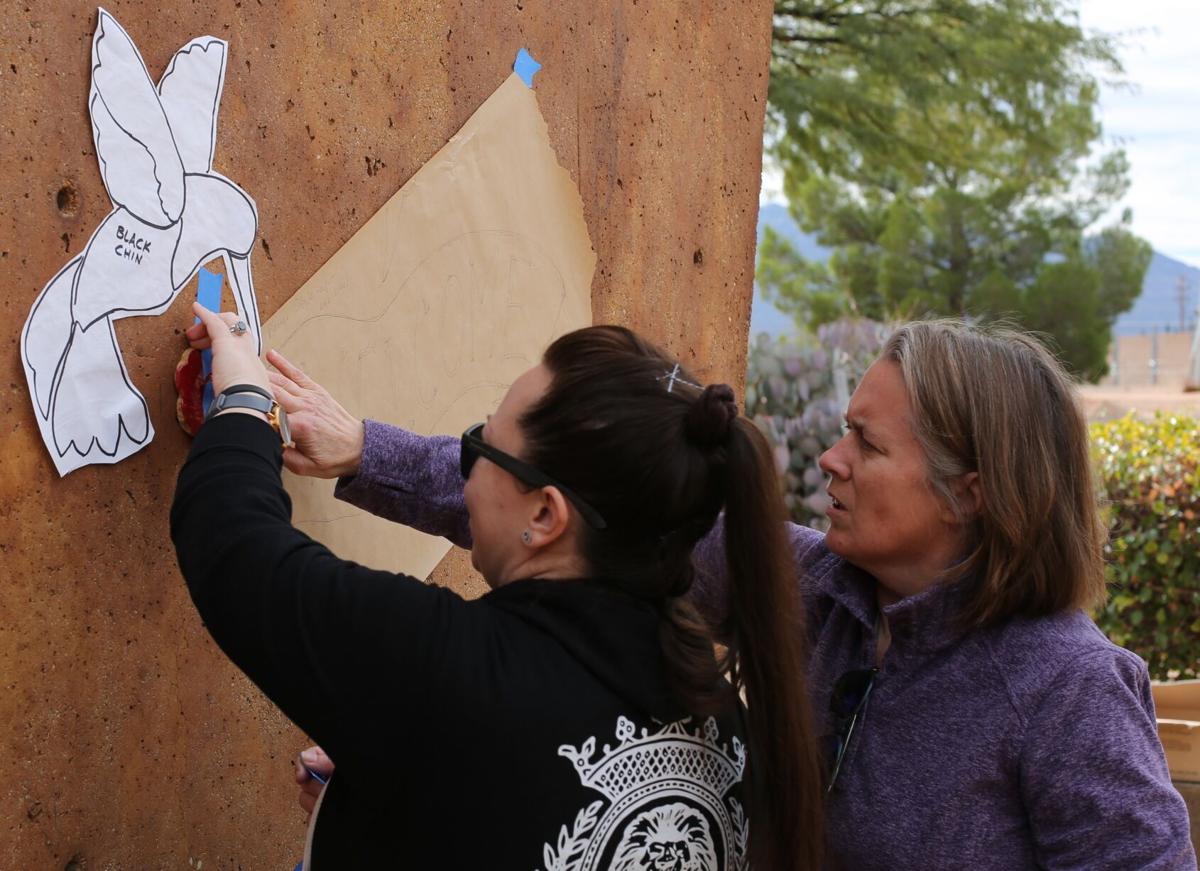 Jodi Gaston, right, a member of Sierra Vista's Arts & Humanities Commission, and Brandy Dare place handmade ceramic tiles to get a layout of the mural going onto the walls of the Sierra Vista Public Library Gardens on Tuesday morning. 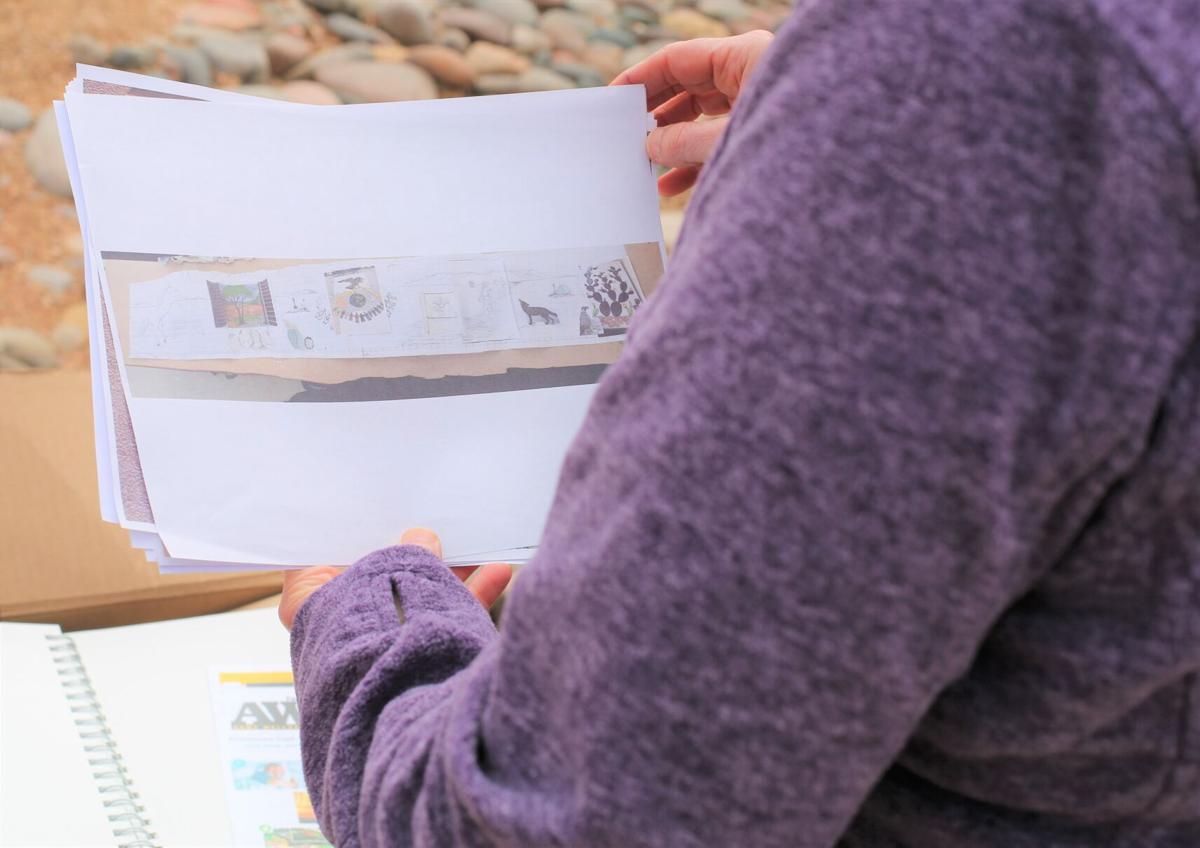 Jodi Gaston shows the plans for the original mural, which will now be split and put on walls around Sierra Vista. 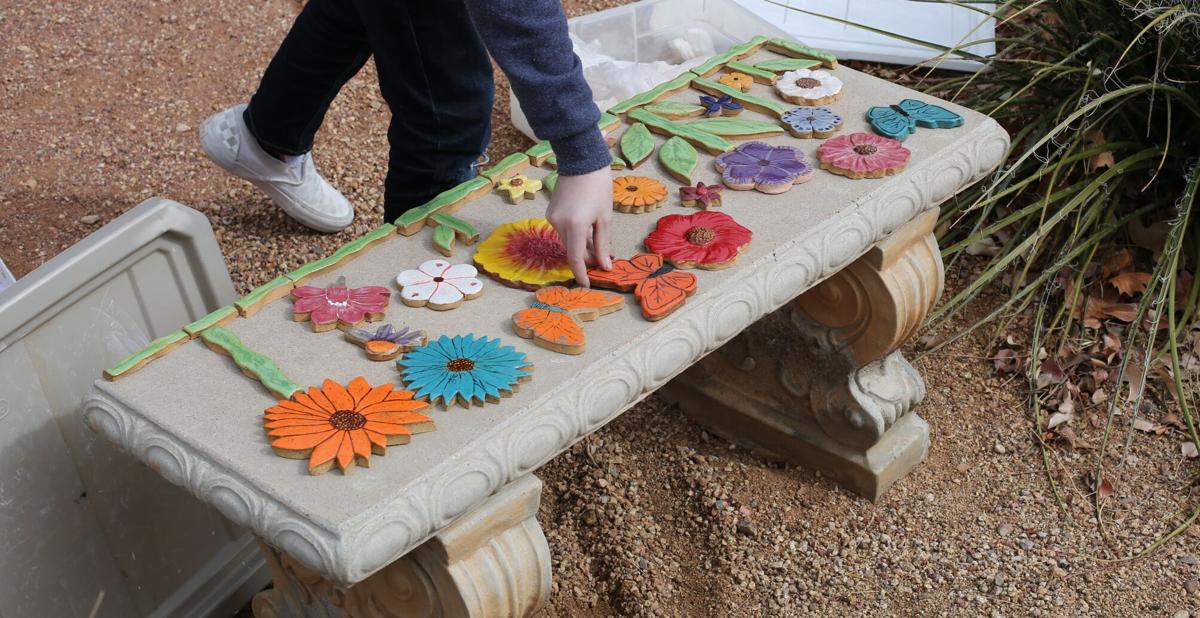 A volunteer helps place tiles onto a bench located in the Sierra Vista Library gardens.

Jodi Gaston, right, a member of Sierra Vista's Arts & Humanities Commission, and Brandy Dare place handmade ceramic tiles to get a layout of the mural going onto the walls of the Sierra Vista Public Library Gardens on Tuesday morning.

Jodi Gaston shows the plans for the original mural, which will now be split and put on walls around Sierra Vista.

A volunteer helps place tiles onto a bench located in the Sierra Vista Library gardens.

Arts & Humanities Commission member Jodi Gaston said the project originated in 2016 and the mural was intended to span across a 74-foot wall within the city limits, but due to structural design issues the project was put on hold.

Gaston said the commission’s former chair, Virginia Thompson, was the project lead at the time of its creation.

Thompson, who teaches ceramics at Cochise College and served on the Arts & Humanities Commission from 2014-19, said that the concept for the mural’s design was created by Tracy Mills, who included artwork depicting the Buena High School Colt and Center for Academic Success’ Eagle into the design along with symbols to honor the city’s men and women serving in the military.

“Tracy’s design captures the essence of our community,” said Thompson.

The project was revived in the early part of last year, with the Arts & Humanities Commission collaborating with the city’s Director of Leisure and Library Services Laura Wilson.

“I appreciate the work and contributions of Tracy Mills, Cochise College, the many Pottery Studio volunteers and the community at large for taking a part in creating something truly remarkable,” Wilson said in an email.

“The Arts and Humanities Commission has done a wonderful job working with our department to identify locations for the pieces and coming up with ideas about ways to showcase and celebrate them.”

Gaston said the commission and Wilson decided to create six to nine smaller murals spread throughout the city instead of one large mural.

The commission is determining the locations for the finished mural pieces.

“The first phase we will see numerous native plant and animal elements of the original mural placed in and about the library’s desert themed garden,” said Gaston. “The second phase will be our beautifully created Buffalo Soldiers pieces by Karri Fox, and those will be placed either at Veteran’s Park, James R. Landwehr Plaza or Soldiers Creek Park off North Garden Avenue.”

Gaston said artists Karl Halsten and Fox contributed to the piece and explained how art students from Buena High School and the Center for Academic Success also added to the mural’s design.

Kasia Gacek, art teacher at CAS, said all of her students, ranging from fourth to eighth grade, participated in the project in the fall of 2018.

Gacek said she first found out about the project by being a member of the pottery studio at the Oscar Yrun Community Center.

Gacek said Mills ran the pottery studio at the time, and asked if her students would be interested in participating in the project.

“Of course I said ‘yes!,’ ” said Gacek, “They thought it was really cool that they were able to be a part of such a big project, and to have their names and artwork on display forever.”

Gacek said her students were able to contribute to the project through making mosaic pieces that would be incorporated into the mural’s design.

“It was also a great lesson for the children on what mosaics are, and how they are made,” said Gacek, “They were fascinated at the process, and how many small pieces put together make something so large and beautiful.”

“I felt that it was important to show them how a community can work together to make this city a beautiful place,” said Gacek.

“We can all do our part to bring some more color and life to this city — to any community for that matter. Not only that, but we are leaving our legacy. A mosaic can last for hundreds of years, so I’m proud that my students and I were able to be a part of history in the making.”

Gaston said the commission’s goal is to have the mural pieces installed by autumn in conjunction with the commissions’ “Submit your Art of 2020” exhibit.

“We are 90% completed with the mural tiles themselves and about 70% completed with identifying placement for the six major mural features,” said Gaston. “We are now in the process of setting timelines for each area for mounting/securing the separate murals themselves.”

Wilson said that she’s looking forward to collaborating with the commission on more projects in the future.

“I need to make sure to give a special shoutout to Jodi (Gaston) and Judy (Wand) for taking the reins of this project over the past year and getting it done,” said Wilson.

“I know it was a lot of work and they were instrumental in ensuring its completion. We are excited about working with the commission on other projects in the future.

“I hope that when folks see this artwork, they will see a part of themselves in it.”