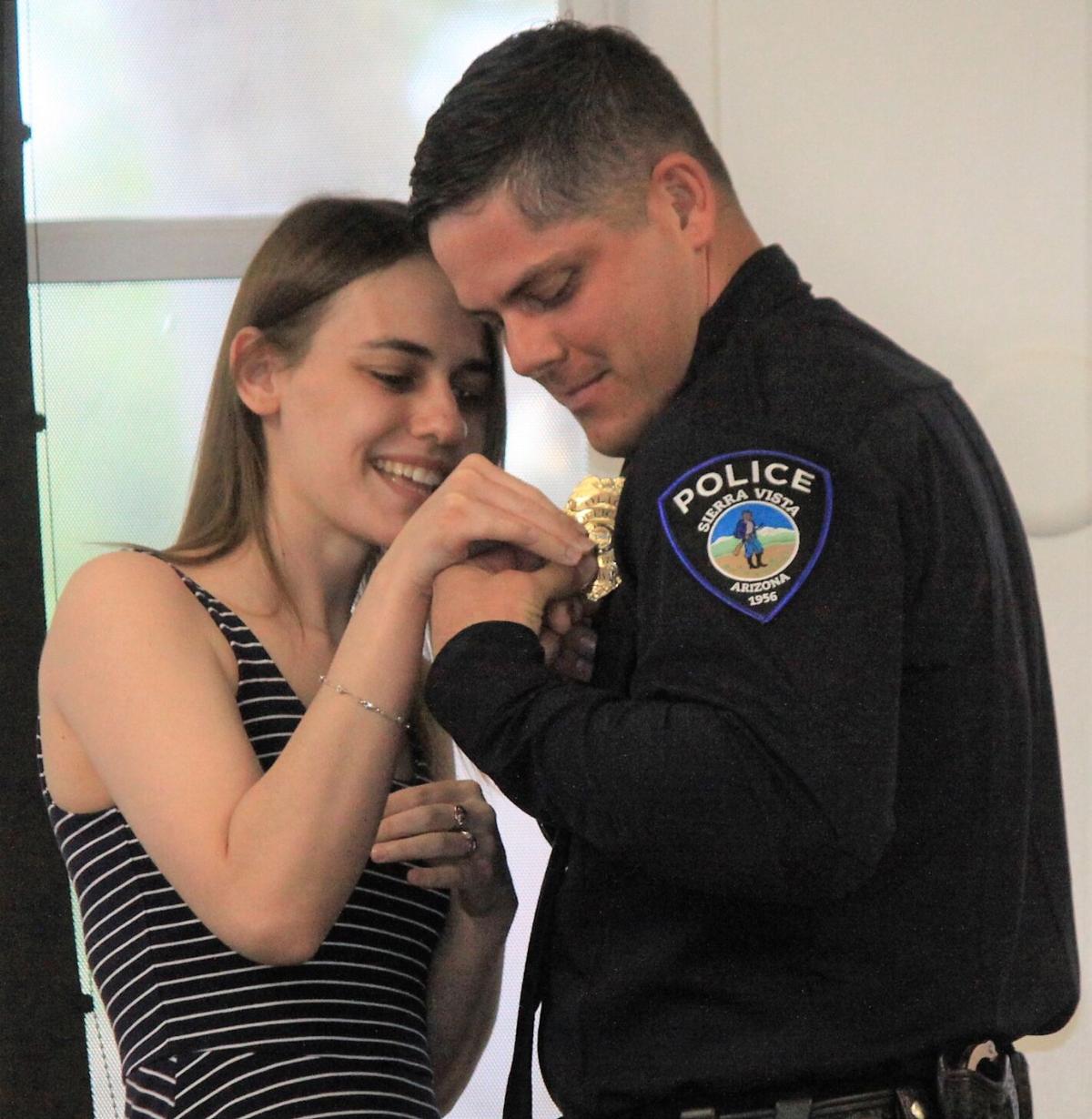 Brandi Comparoni gets some help from her husband, Michael, one of the newest members of the SVPD, as she pins his badge on him at the Southeast Arizona Law Enforcement Training Academy graduation ceremony in Douglas. 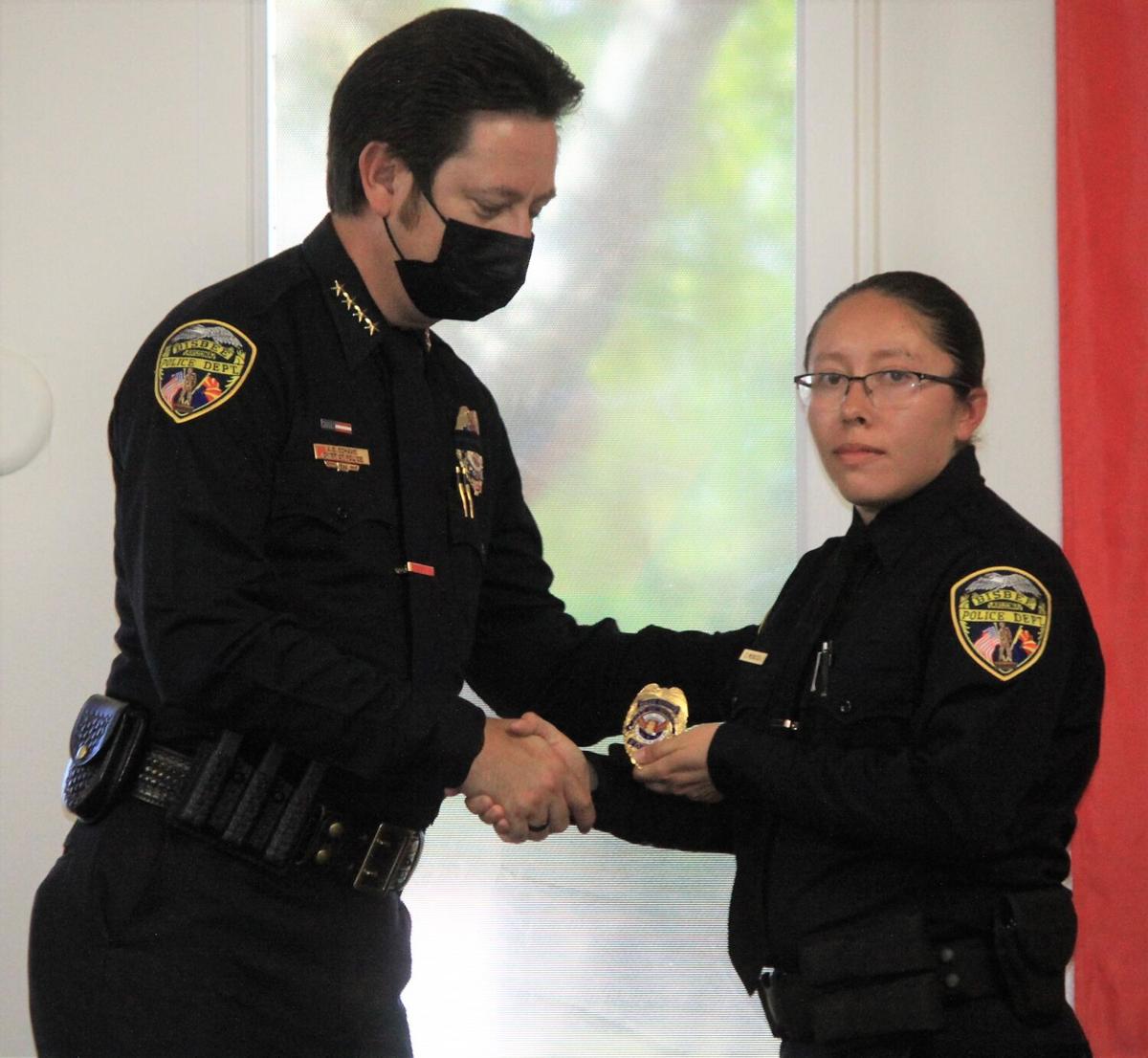 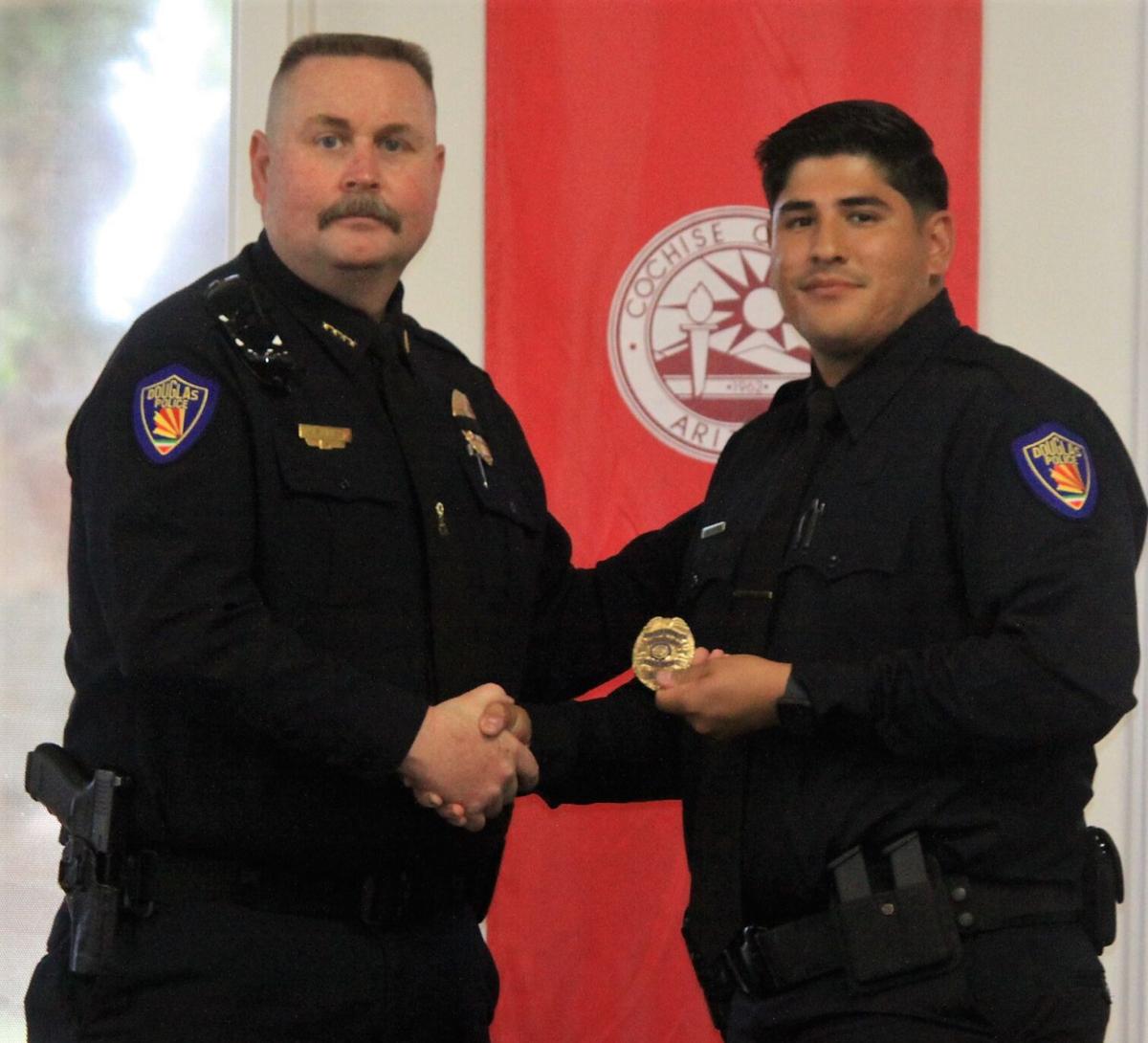 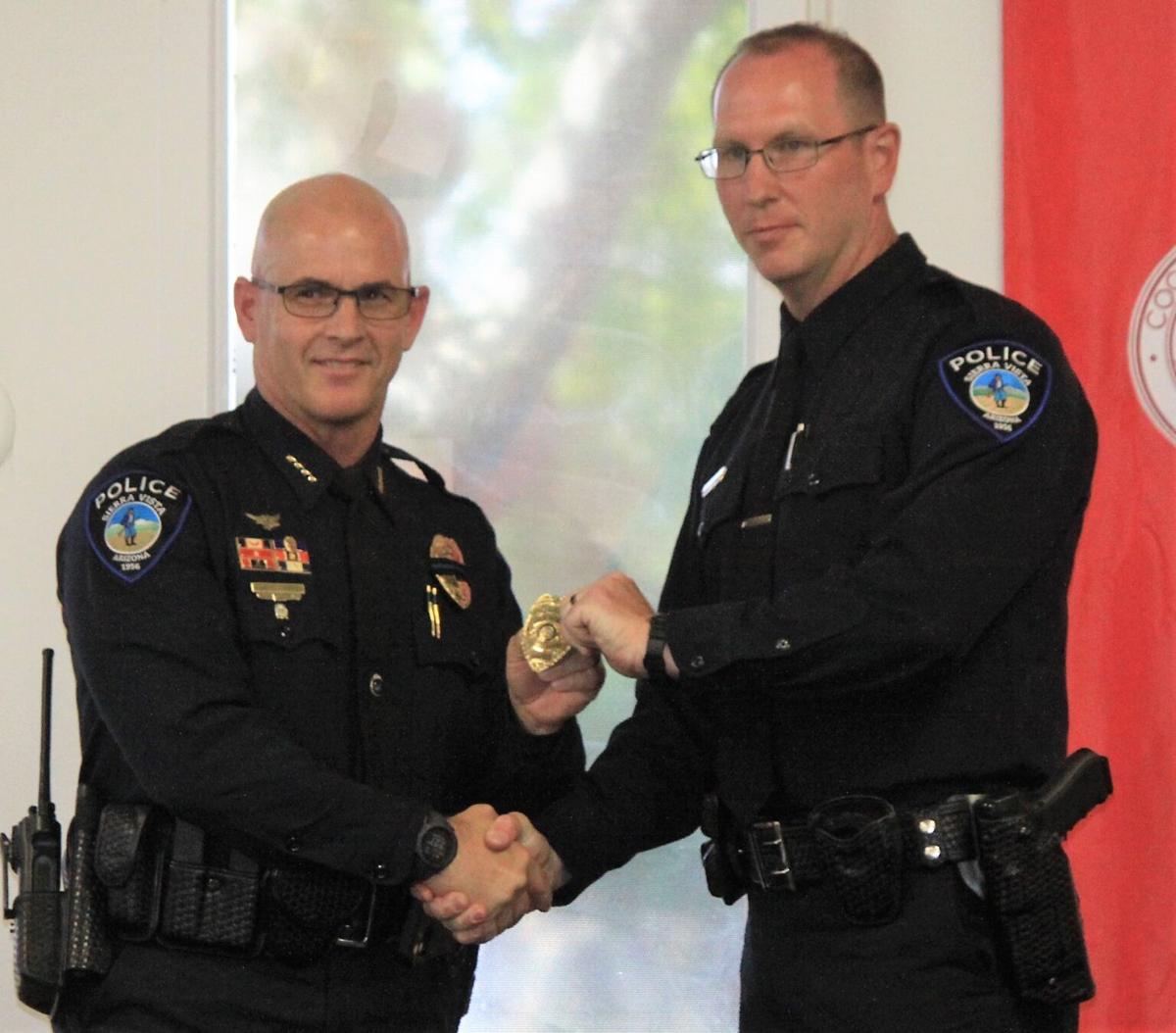 SVPD Police Chief Adam Thrasher, left, presents class president and his newest police officer, Samuel Brady, with his badge at the May 6 graduation. Brady also received the class awards for firearms and academics. 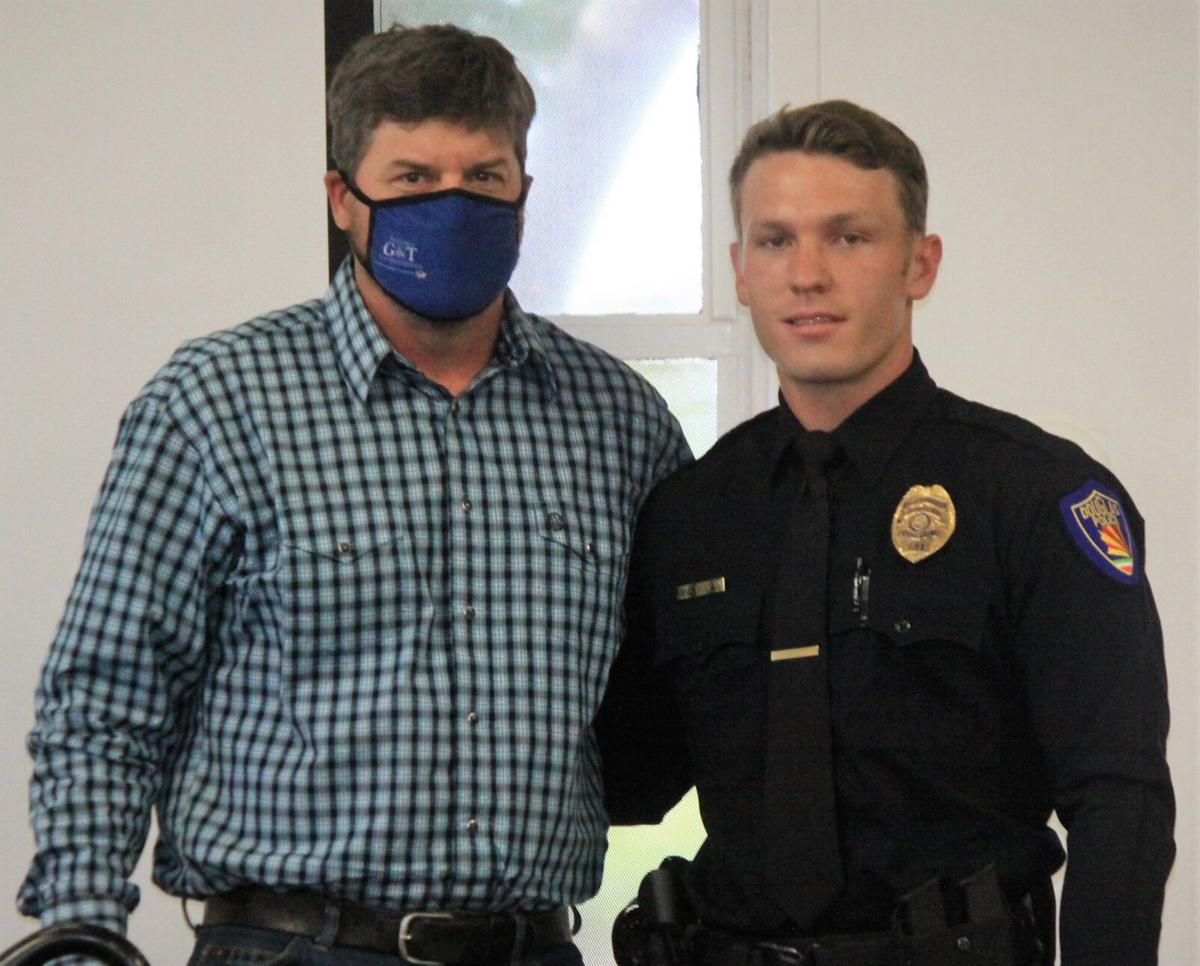 Bill Hahn and his son Sean, one of Douglas' newest police officers, pose for a picture at the May 6 graduation ceremony. 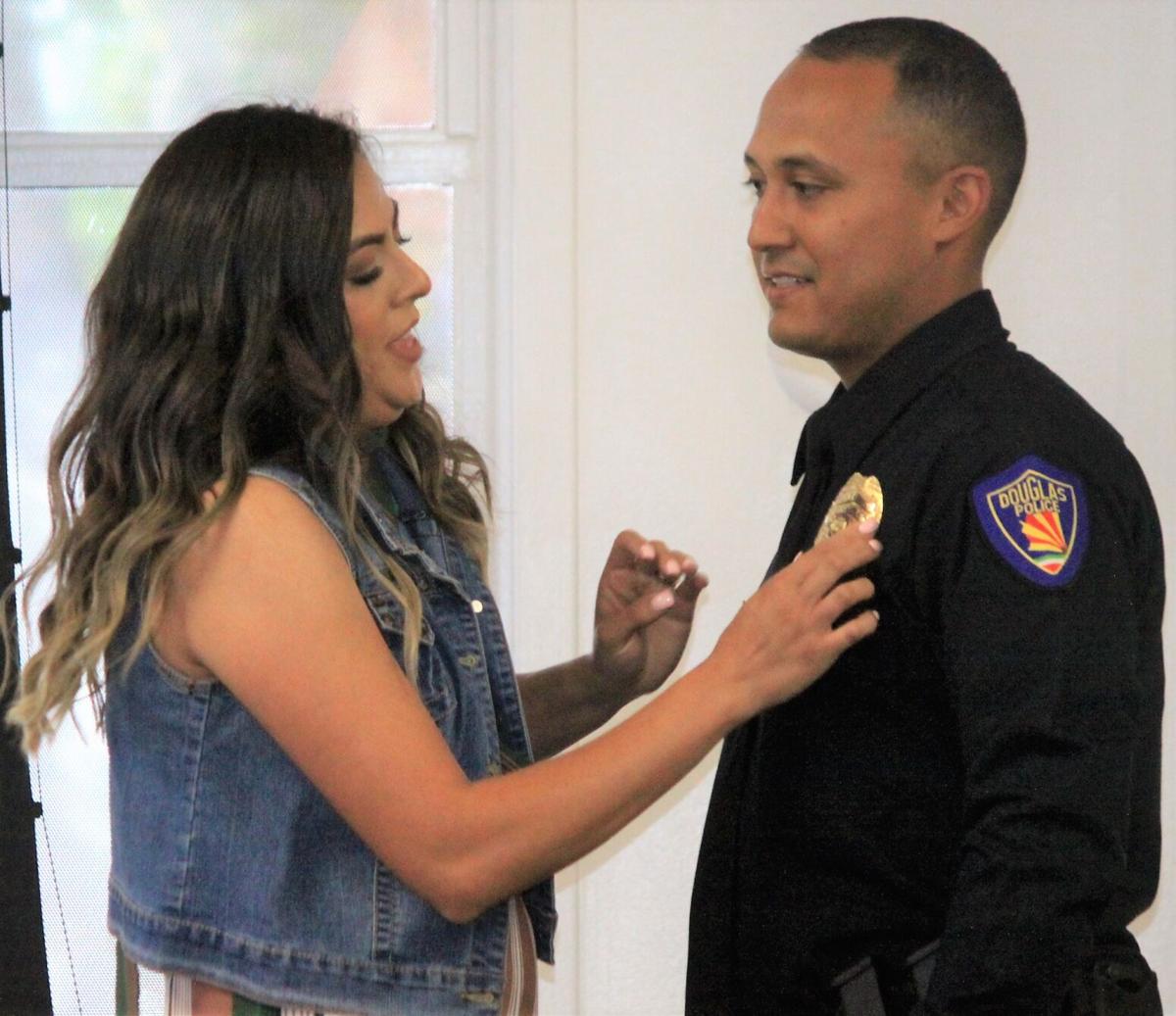 Crystal Resendiz makes sure the badge is secure after pinning it on her husband, officer Javier Resendiz.

Brandi Comparoni gets some help from her husband, Michael, one of the newest members of the SVPD, as she pins his badge on him at the Southeast Arizona Law Enforcement Training Academy graduation ceremony in Douglas.

SVPD Police Chief Adam Thrasher, left, presents class president and his newest police officer, Samuel Brady, with his badge at the May 6 graduation. Brady also received the class awards for firearms and academics.

Bill Hahn and his son Sean, one of Douglas' newest police officers, pose for a picture at the May 6 graduation ceremony.

Crystal Resendiz makes sure the badge is secure after pinning it on her husband, officer Javier Resendiz.

Three of the new officers, Sean Hahn, Miguel Garcia-Peralta and Javier Resendiz will be working for the Douglas Police Department; Samuel Brady and Michael Comparoni will be working with the Sierra Vista PD; and Esmeralda Mendoza, the lone female in the class, will be with the Bisbee Police Department. One other recruit, Jacob Slawson, will be joining the Tohono O’Odham Nation PD.

Brady was presented with the academic and firearms awards. Hahn received the physical fitness award

Dr. J.D. Rottweiler, president of Cochise College, took a moment to congratulate the recruits on their completion of the course.

“In the face of a pandemic and through numerous ups and downs, you have shown resiliency and true grit. For this you should be extremely proud,” he said. “A little over a year ago, in the early stages of the pandemic, the governor issued a stay-at-home order. Your predecessors in Class 20-1 were just weeks away from completing their academy experience. Knowing the need for first responders, I personally called the governor to seek an exception to the order for four programs, the Police Academy, Fire Science, Paramedic/EMT and Nursing. I shared that these programs are essential and needed, now and in the future. Without these programs being able to complete, we risk life as we know it in Arizona, particularly rural Arizona. He agreed and the programs were allowed to continue, although in changed formats.”

Rottweiler stated the pandemic has shown, like many other crises, the need for critical, essential workers.

“In times of crisis, we need essential community college programs,” he said. “Community college graduates are often the first, and the last, line of defense in our communities. No matter the crisis, we see our graduates step up, respond and assist their community and those in need. You will begin your careers at a time of true crisis. One day you will look back and realize you are a hero. You will have done something very few have done. You chose law enforcement as a career and finished the academy during both a pandemic and during significant social unrest. Please realize you are essential and a hero.

“Likewise, you will be expected to be a hero by our community and the people you serve. May you commence from here knowing your accomplishment is real and recognized. We don’t ask a lot of you, just that you make the world a better place. Serve, protect, heal someone, bring peace and comfort to the needy, teach a child, solve problems. You know, just the simple things. I know you are up to the task.”

After the ceremony, Comparoni said knowing he has completed the academy feels good and he’s excited about starting the next chapter of his life with the SVPD. He admitted going through the academy during COVID-19 was challenging in that he was doing his best to try and stay healthy.

His wife, Brandi, pinned his badge on him after it was presented to him by Adam Thrasher, chief of SVPD.

“I know how hard he worked to complete the academy,” Brandi said. “I’m very proud of him”

Douglas’ newest police officers all enjoyed a three-day weekend and reported to work Monday. All three state they are happy the academy is over and are eager to begin working for the DPD. They are also aware there is still a lot of learning ahead.

DPD Chief Kraig Fullen said his three new officers will undergo a 12-week field training, after which they will patrol the streets of Douglas.

“During that 12-week process they will ride with an officer who will show them the ropes,” the chief said. “They do have reading assignments and tests they must complete. In reality, it’s a lifelong career-learning experience. In this profession you are in a constant state of learning.”

Hahn, a graduate of Valley Union High School in Elfrida, said he got interested in the academy while taking law enforcement classes in college. He admits it was strange going through the academy during the COVID era but it was just a matter of following the rules and everything worked out.

“I’m glad the academy is behind me,” he said. “I’m ready to start the next chapter in my life.”

Resendiz, a Doulas native, said growing up he always admired police officers and knew this was something he one day wanted to do. He said the most difficult part of the academy was being pepper-sprayed in the face and then being forced to maneuver through some obstacles.

Garcia-Peralta added even though the journey was hard, the camaraderie gained from everyone made his academy experience better.

“This is something I will never forget,” he said.

The chief said with the new officers coming on board, the DPD is still not at capacity.

“We have four vacancies that we’re working on right now,” he said. ”We’ve lost a number of officers through retirement. That’s been the biggest hurdle as of late, filling their vacancies.”

Fullen states he’s proud of his new officers for completing the academy.

“We’ve all been here at one time or another and have lived this experience,” he said. “We know that there will be some challenges but you can do it. It’s great to see them finish what they started 17 weeks ago.”

Another academy at Cochise College is scheduled to begin in late July. Fullen anticipates having four recruits attending that academy.