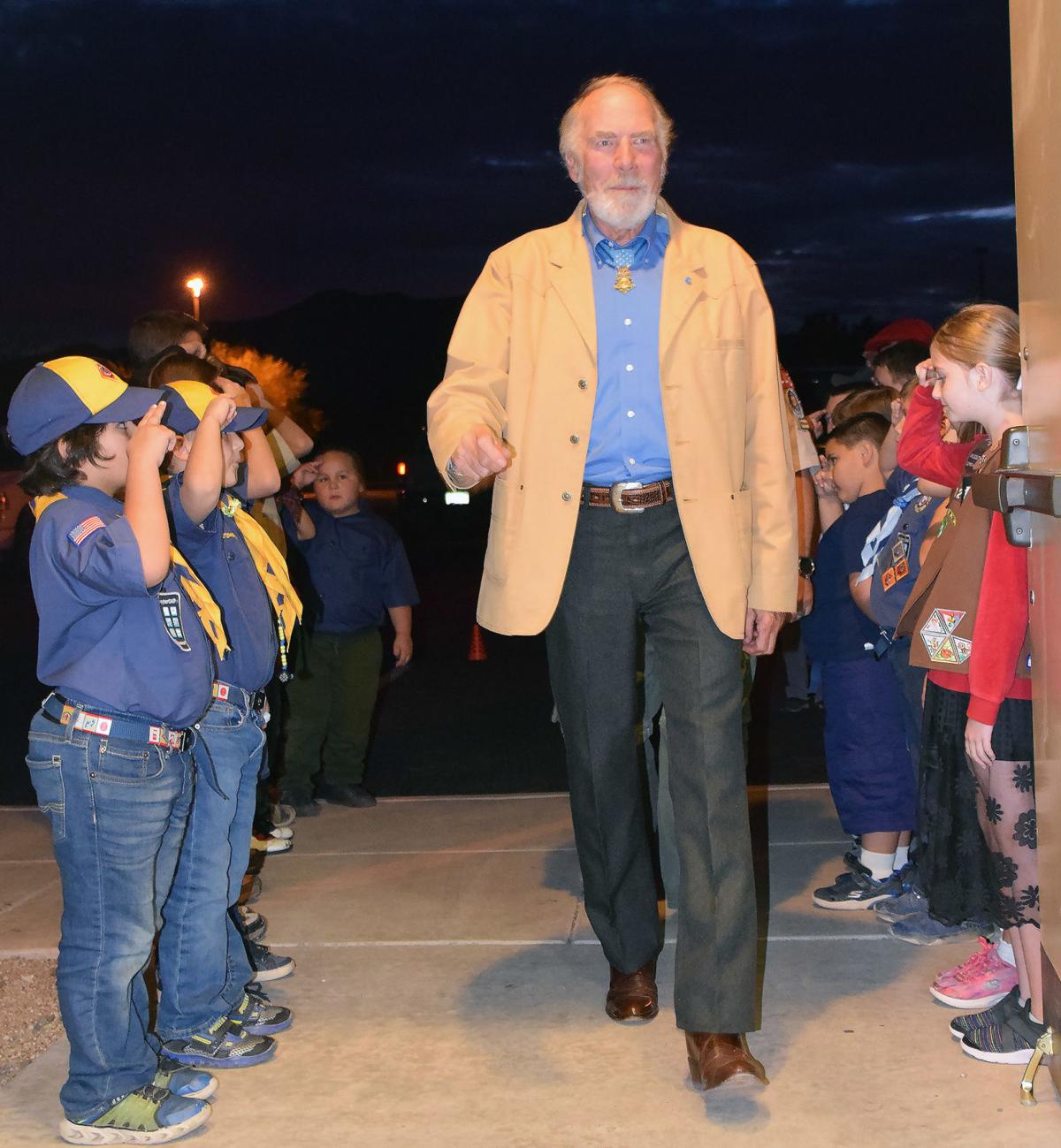 Perhaps the last place you might expect to see Medal of Honor recipient Drew Dennis Dix on Veterans Day is exactly where he wanted to be.

Speaking to Boy and Girl Scouts.

Dix, who received the nation’s highest military honor from President Lyndon Johnson in 1969, was the special guest of the Warrior Healing Center in Sierra Vista. He highlighted a weekend of events that included a dinner program Sunday night at the United Methodist Church.

“Our theme for the weekend has been the ‘Code of the West,’ which captures the values of the pioneers, miners, farmers and those who settled the West during a lawless time when you were only as good as your word,” Kirk said. “People had to depend on each other, which is the ethic of the military.”

He said the inaugural Veterans Day Medal of Honor Legacy Dinner focused on conveying those values.

“It’s important that our kids to know that Veterans Day is more than just getting a free plate of pancakes at the restaurant because you served in the military, or marching in a parade,” Kirk said. “This weekend is all about creating an awareness and enshrining the values that our military instills in those who serve and have served.”

Speaking to a room full of scouts, their parents and scout leaders, Dix emphasized the importance of recognizing the sacrifice of others and “…doing good to help others.”

“When you’re on the battlefield, it’s all about doing the best you can to help those around you and protecting people,” he said.

Dix earned his Medal of Honor for “…conspicuous gallantry and intrepidity in action” during a more than 50-hour battle with two heavily-armed Viet Cong battalions that attacked the Province capital city of Chau Phu in Vietnam beginning on January 31, 1968. During the fight, Dix led a small group of soldiers into the occupied city and rescued endangered civilians, including Maggie O’Brien, a 24-year-old volunteer nurse in the Peace Corps.

He was awarded the honor about 11 months later at President Johnson’s last Medal of Honor ceremony before he left office. Dix is one of 71 still-living medal recipients in the United States.

Dix enlisted in the Army at 17 and earned assignment to Special Forces three years later. His first visit to the area came in 1967 when he parachuted from an airplane during training, setting up camp in Garden Canyon at Fort Huachuca.

“The first time I saw Sierra Vista it was from the air and the city was one blinking light,” he mused.

Since that experience he has returned to the area several times, participating in programs in Tombstone and filming a short, low-budget movie entitled “Draw the Line.”

“The film focuses on values and character,” Dix said. “When you think about it, regardless of whether you were in the military, it’s the good works and sacrifice of those who came before us that built this nation. That’s what the film is about.”

During his talk Sunday night, Dix encouraged young scouts to “be the best that they can be,” and always work toward making things better.

“If something bad happens in your life, use that to motivate yourself to improve. If something good happens, work at taking that advantage to the next level,” he said.

Kirk said Dix will also be part of local efforts to improve mental and behavioral health services for active soldiers and veterans. Kirk said the Medal of Honor winner offered innovative ideas to address the issues that have caused a dramatic increase in suicides in the military.

Creden Huber, Chief Executive Officer at Sulphur Springs Valley Electric Cooperative, was honored at the dinner for sponsorship of the event.