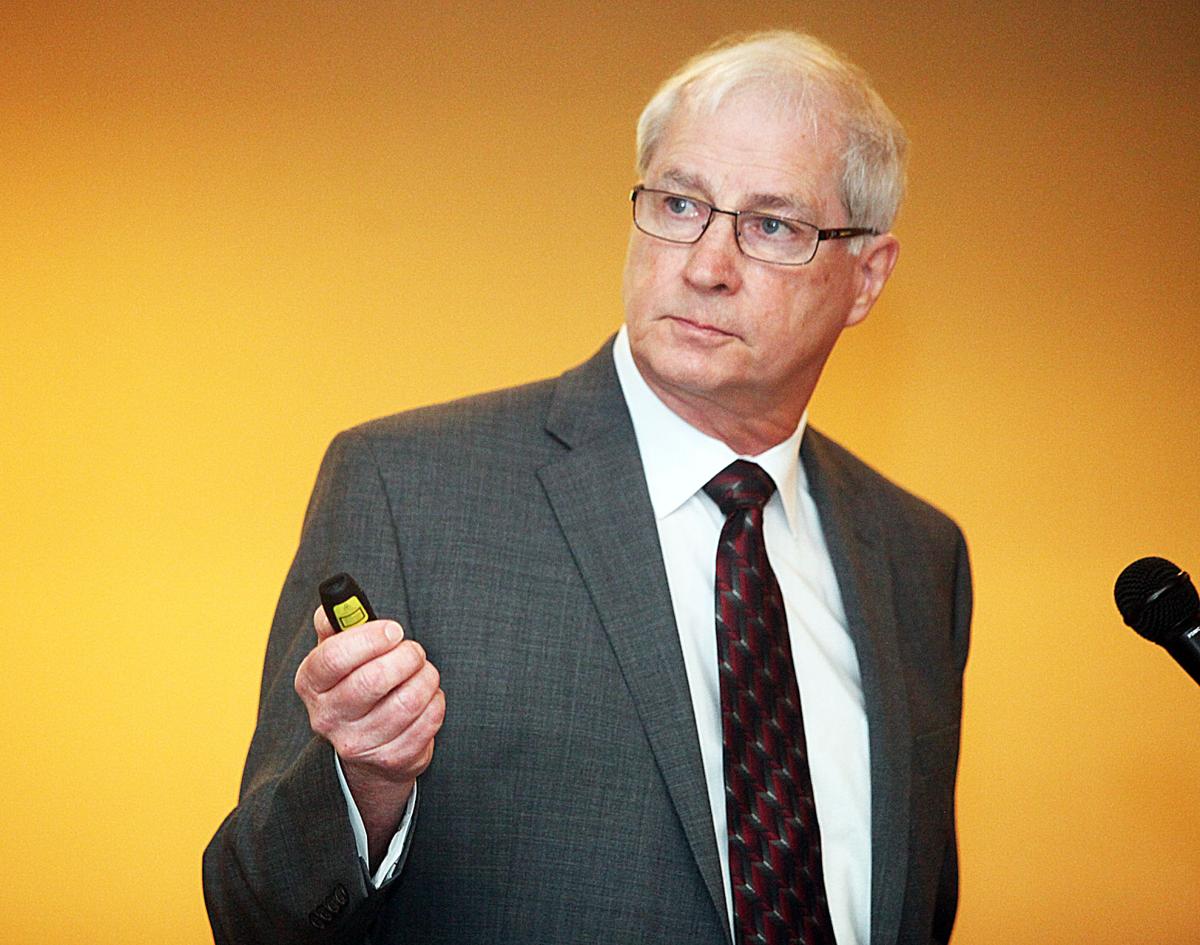 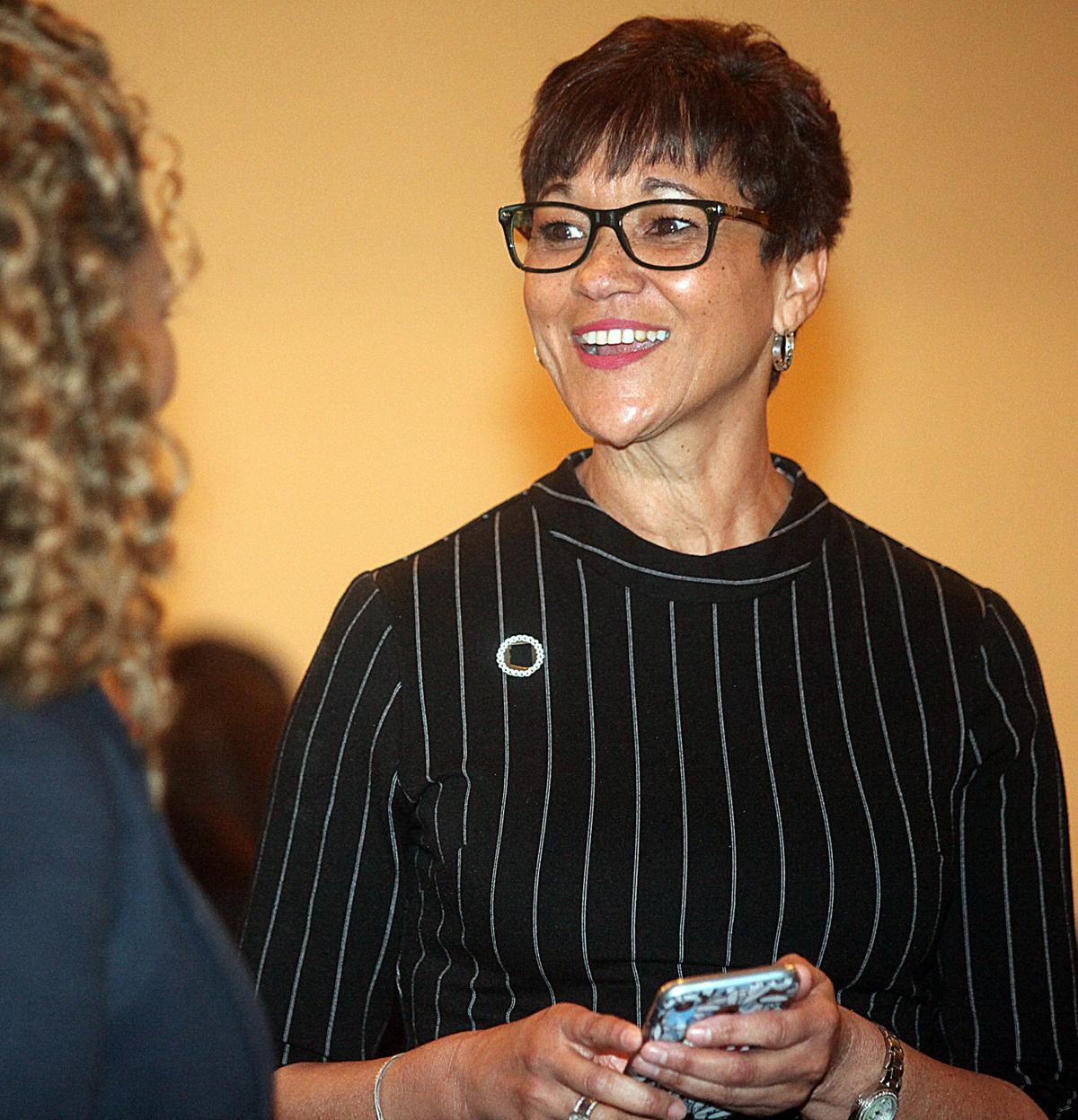 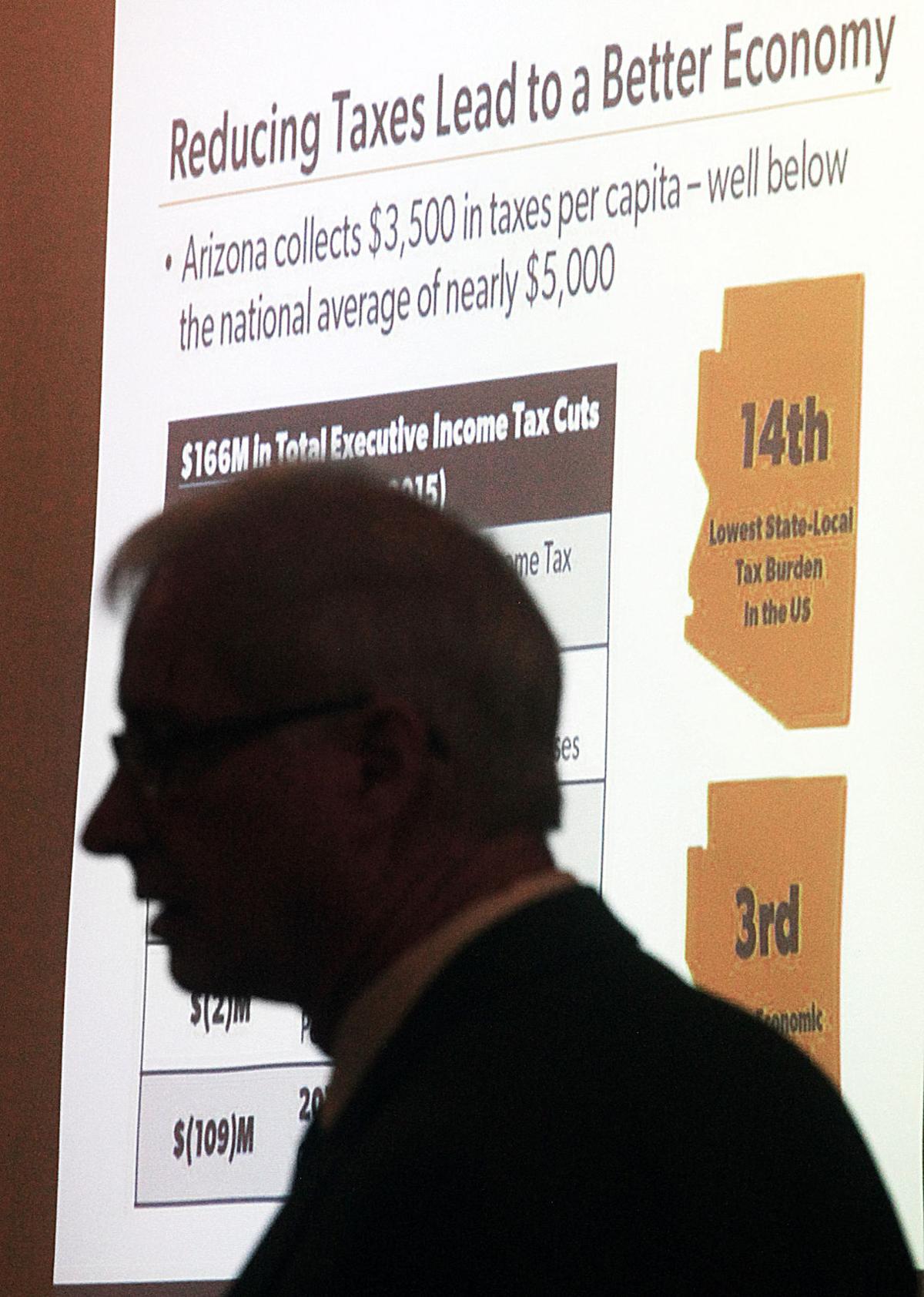 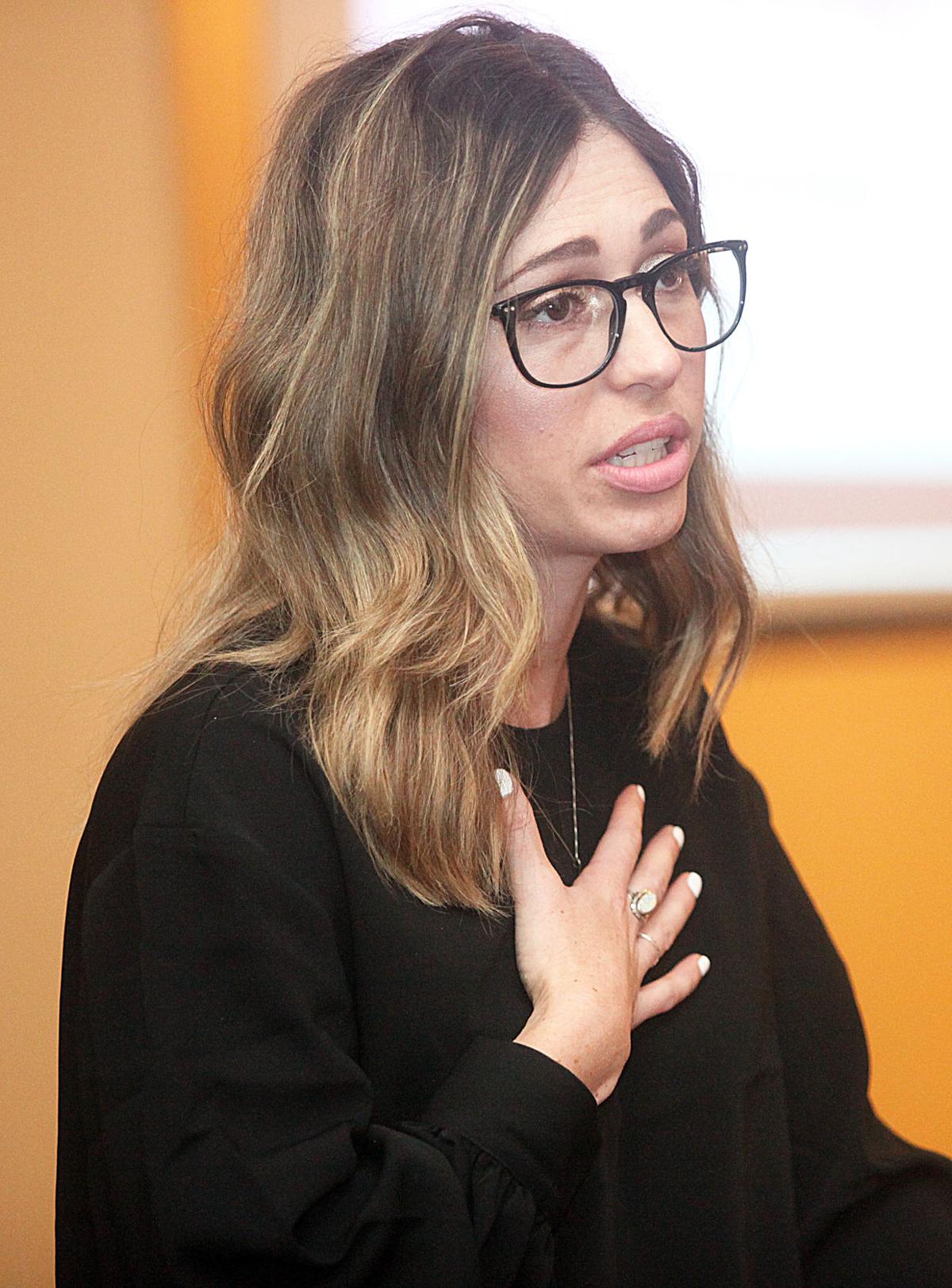 The group also tried to assure the crowd of around 50 people — they said after the event it was the largest such crowd they had spoken to about Ducey’s proposed budget, and asked some of the more intellectual questions they’ve heard as they’ve traveled the state — that rural interests and veterans are high on Ducey’s list of priorities. Despite those assurances, though, the trio didn’t offer a satisfactory response when questioned about an apparent lack of support for Fort Huachuca from the governor’s office.

Bill Greeney, the assistant director in the Office of Strategic Planning and Budgeting, was the primary presenter at the morning event in the Windemere Hotel and Conference Center’s Grand Ballroom.

Greeney painted a rosy current economic outlook for the state, pointing to rising revenues and surpluses as indicators of economic health. He also stated Ducey intends to continue to grow the Budget Stabilization Fund — more commonly known as the “Rainy Day Fund” — which began the current fiscal year at just over $1 billion, a record high for the state. The proposed FY 2021 budget includes another $25 million investment.

“The economy is in great shape,” Greeney said. “Last year, we had quite a bit of revenue come in that we weren’t planning on or didn’t expect. There was about $760 million of available money to spend ... We don’t want to get in a position where we’re spending money, thinking the money will always come in, but it doesn’t.”

Long-term, Greeney said, the governor’s office projects economic growth in the 2 to 2 1/2 percent range, though it is currently outpacing that expectation.

Factors in the state’s economic success include Arizona being the No. 1 state in the U.S. for “in-migration,” which is the process of people moving into a new area of the country to live permanently, Greeney’s report stated. Arizona last year captured nearly 10 percent of all U.S. migrants. The state also sits second in the country in manufacturing job growth.

Greeney, after briefly discussing the $45 million in the executive budget to fully exempt military pension pay from income tax — a move projected to save each veteran pensioner $840 per year — quickly moved on to discuss K-12 education spending.

He pointed out that the proposed FY 2021 executive budget, when looking at baseline — “If you’re doing the same thing next year that you’re doing this year, what is the cost to do it; that’s what ‘baseline’ is,” he explained — plus initiatives, 61% is tabbed for K-12 education.

“So, in case you’re wondering where the governor’s priorities are, it’s education,” Greeney said.

“(Another) one of the things we’re doing is the continuation of the ‘20 by 2020’ pay package for teachers,” Greeney said, referring to Ducey’s 2018 pledge to increase teacher salaries by 20 percent. “This will be the third year that finally gets to the 20 percent.”

Among other points, Greeney also noted that the governor’s office budget accelerates the refunding of “additional assistance for schools,” a budget area that was “reduced during the recession because we needed to find all the money we could.” The original plan was to restore those funds by the and of FY 2023, but Greeney said Ducey’s budget would fully restore those funds in the FY 2021 budget, two years ahead of schedule.

Wednesday’s budget presentation included plans to fund the repair and construction of not only aging schools, but also Arizona’s old and decaying prisons.

“About 40 years ago, the Florence prison was used as a movie set ... as an old prison,” Greeney deadpanned, drawing laughter from the crowd.

A number of other items and initiatives were touched on Wednesday, including a $154 million capital outlay for the Arizona Department of Transportation, $59 million for a “smart highway corridor,” in which broadband infrastructure is being laid beneath highways like Interstate 10, and $10 million for a rural broadband grant program.

Funds for rural tourism marketing were also included in the governor’s proposed budget. Ducey did not attend Wednesday’s event, but will be in Sierra Vista Feb. 26 for a “State of the State” event hosted by the Sierra Vista Area Chamber of Commerce at Cochise College.

Lauren Bouton, a Sierra Vista native who works in Ducey’s office as the director of stakeholder engagement, reminded attendees when she introduced Greeney that the governor’s proposed budget will be pored over, picked apart and negotiated by the Legislature. She encouraged residents who feel strongly about anything included, or not funded, in the budget to make their voices heard.

“If you do see stuff in here that you like, we recommend ... that you reach out to your legislators,” Bouton said. “If there’s stuff that you don’t like, please do that as well. We want this to be a conversation.”

Some audience members’ voices were heard Wednesday when the floor was opened for questions. Among those who asked some very specific and pointed questions of the governor’s office staffers was retired U.S. Army Col. Michael Boardman, formerly a garrison commander on Fort Huachuca. Boardman, who currently sits as president of the board of the “Huachuca 50,” a group organized to stump and lobby on behalf of Fort Huachuca, asked Greeney if the governor has any plans to include in the budget funds to protect the Army post from downsizing or other threats. Boardman said “it appears that the budget and the governor’s office pretty much takes for granted the fact that Fort Huachuca is the largest economic contributor, by an order of magnitude — 10 times — in Cochise County.”

The colonel continued, “I appreciate the support to the veterans (included in the proposed budget), but that’s not the same as defending the interests of Fort Huachuca against many threats out there. ... Is there any plan to put any money or any programmatics behind that?”

“We’re not!” exclaimed Boardman and another attendee, nearly in unison.

“That would be something you might want to look at,” Boardman continued, “because any downsizing of these installations is going to have an immediate and enormous economic impact on the area and the state.”

Mignonne Hollis, the executive director of the Arizona Regional Economic Development Foundation, which hosted the event, said she likes the willingness of the governor’s staff to go on the road to hear from constituents across the state and “learn what each community’s touchpoints are ... the big things that will help economic development in our area.”

Hollis expressed confidence that attendees’ comments and requests will make it back to Ducey’s Phoenix office and be heard, specifically Col. Boardman’s request for support for Fort Huachuca.

“I know for a fact that it gets back to the governor’s office,” she said. “That’s why they came out and did the road show here. We had been working closely with them on the budget and ... actually it was, I believe, (state Sen.) David Gowan who reached out and said, ‘Hey, what about Sierra Vista?’ So, I do know that they listen.”