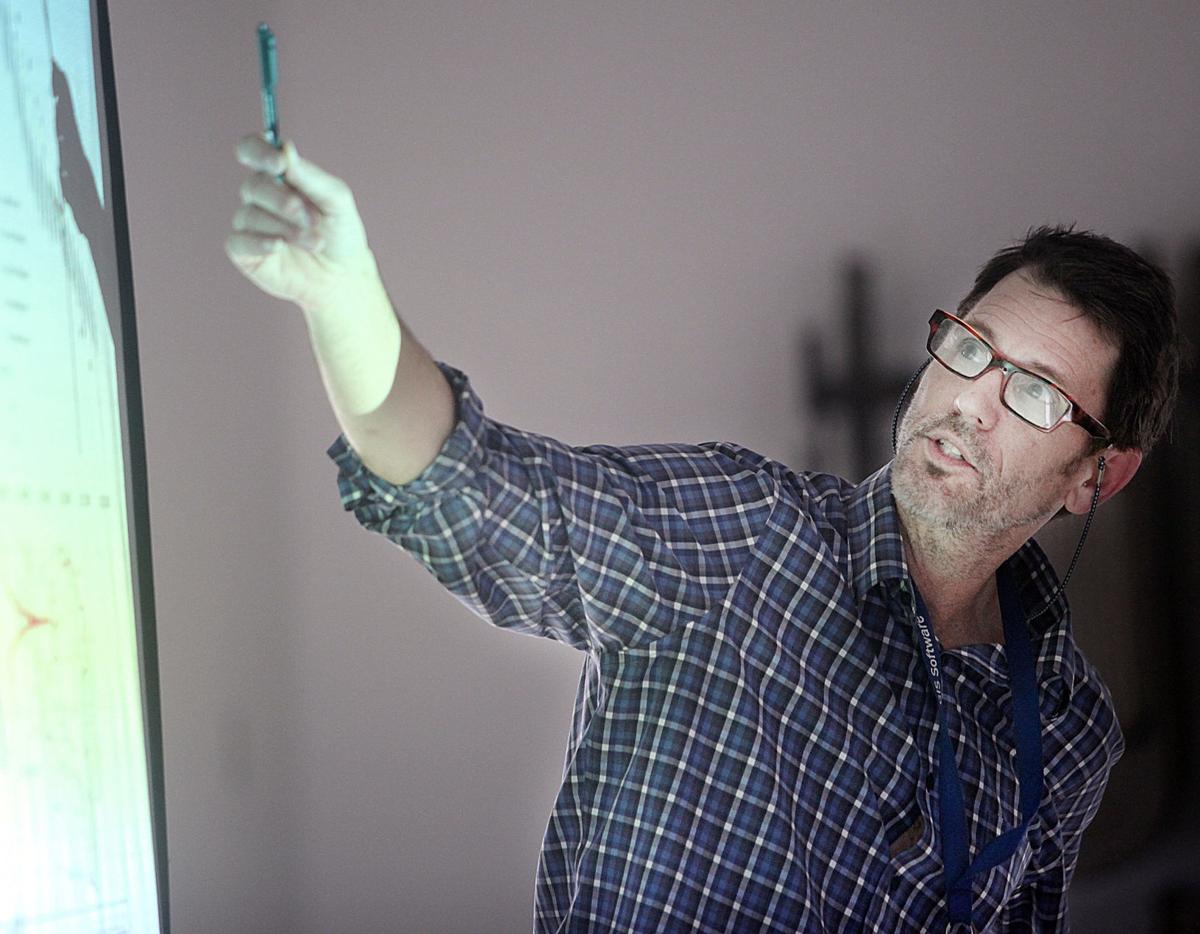 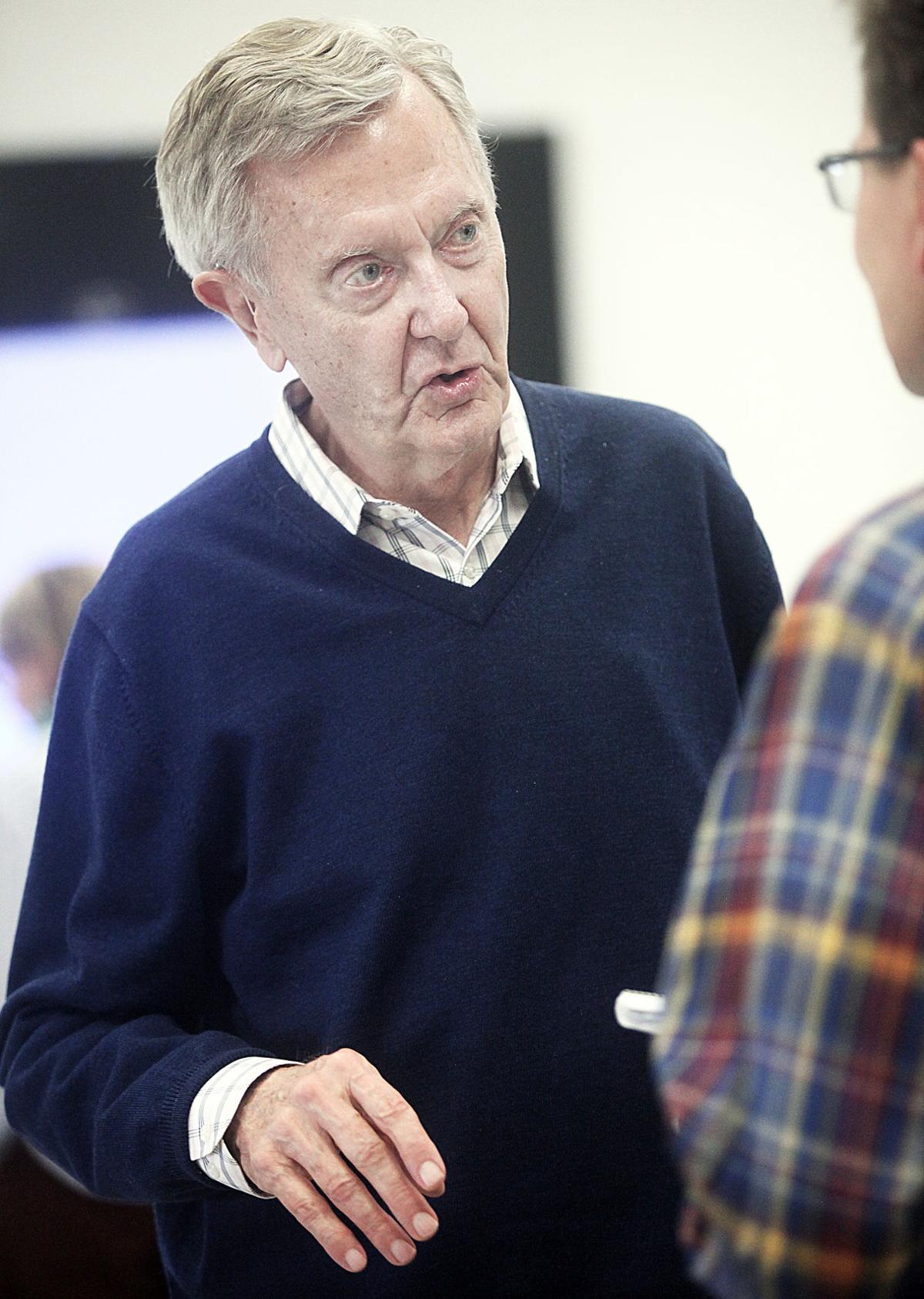 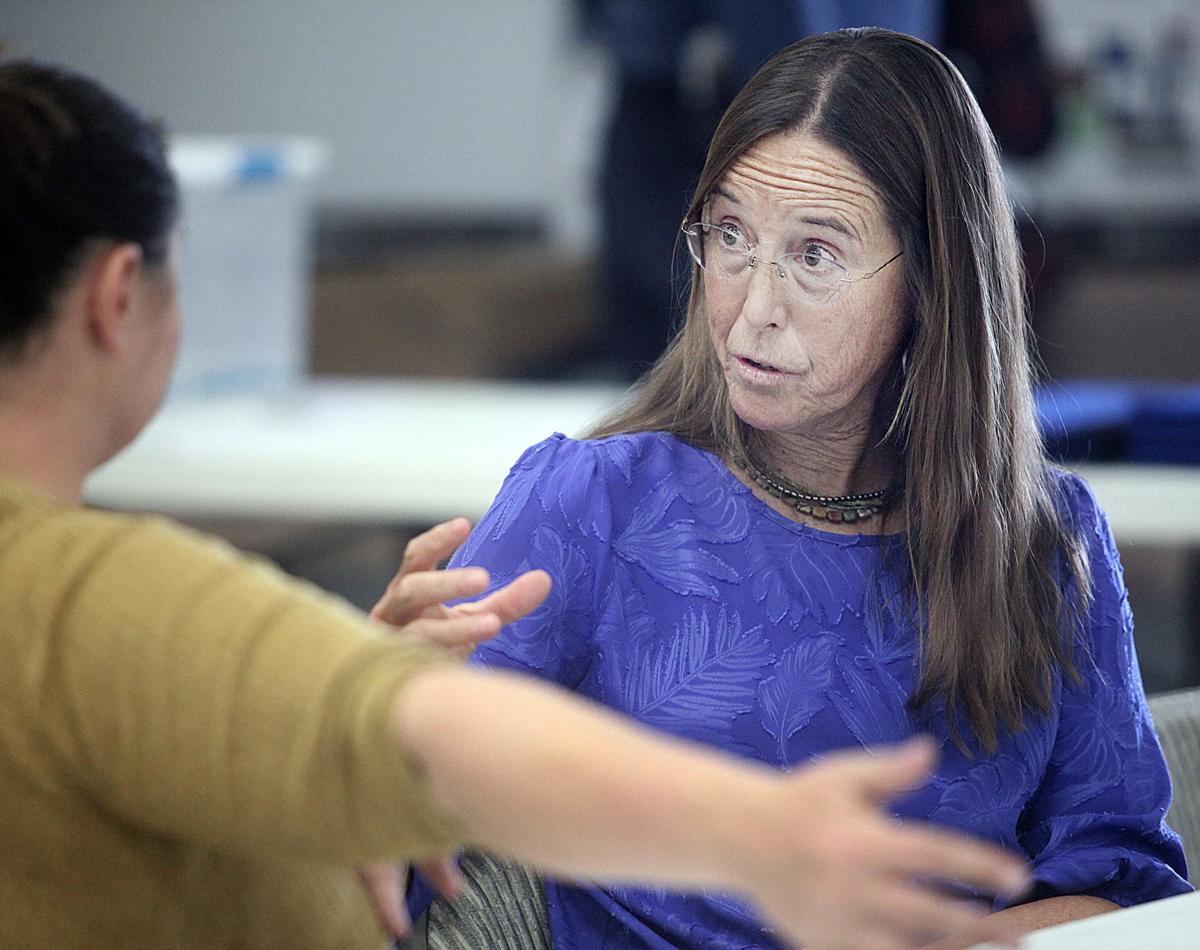 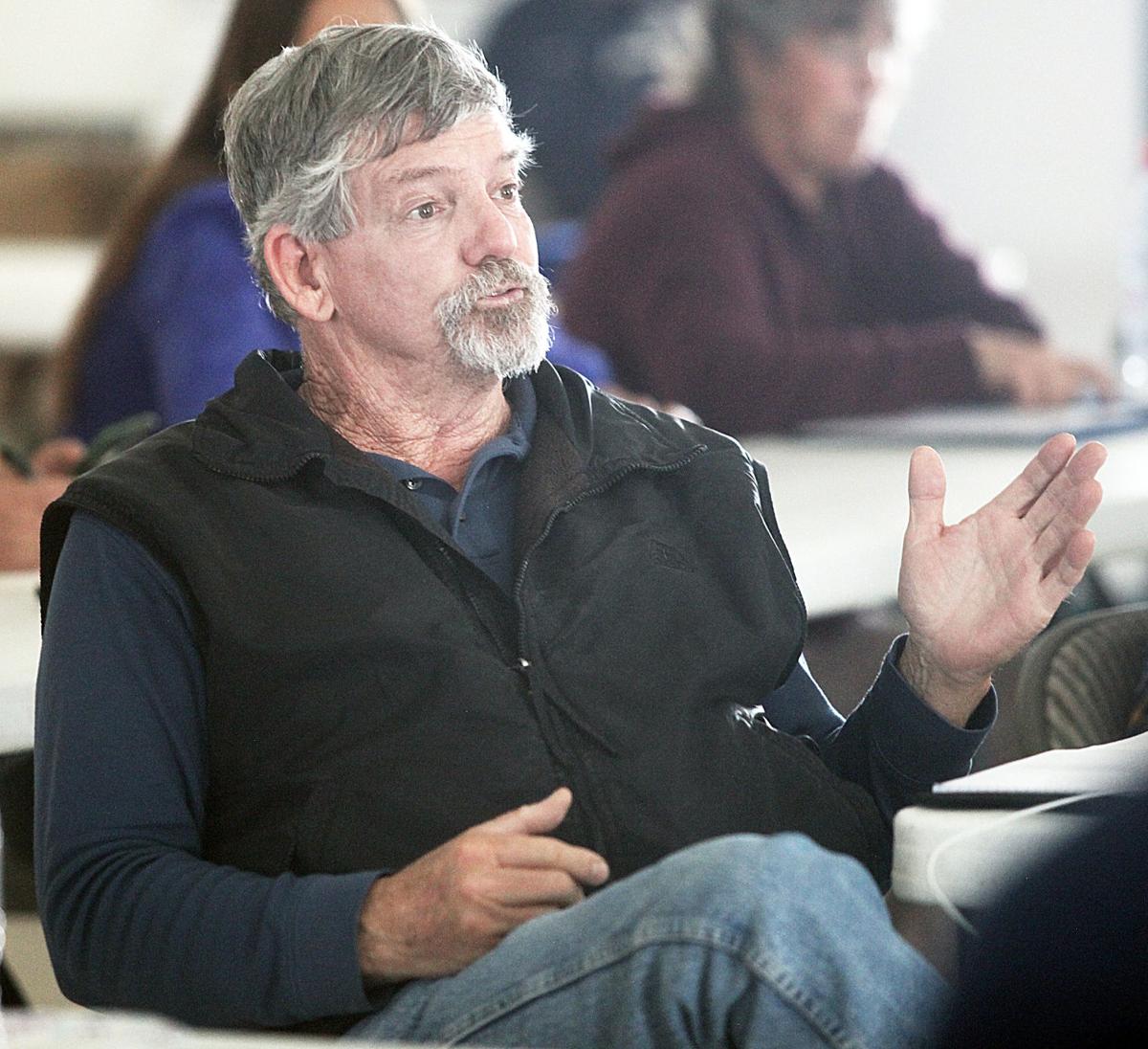 Sunsites resident Alan Seitz asks a question while attending the workshop in Pearce.

Sunsites resident Alan Seitz asks a question while attending the workshop in Pearce.

SUNSITES — When county Board of Supervisor member Peggy Judd asked former Gov. Bruce Babbitt to share his thoughts on rural counties taking on responsibilities relating to groundwater management, he responded, “I couldn’t say no.”

Judd heard Babbitt talk about the underground water problem in rural Arizona at a conference last year and it struck a chord in her as she realized the extent of the groundwater problem in the Willcox Basin. His words inspired her to hold a series of workshops on the Willcox Basin which provides water to a large portion of northeastern Cochise County in the Sulphur Springs Valley.

Willcox, Kansas Settlement, Sunsites, Sunizona and Dragoon all use water from the declining aquifer and a number of residents have experienced wells going dry in recent years as was acknowledged in a basin well sweep by Arizona Department of Water Resources (ADWR) in 2018. Judd took the concerns of her constituents to heart and decided to learn about the problem along with them through a series of workshops.

At the Willcox Water Project’s third workshop Mar. 11 in Sunsites, Babbitt commended her initiative and the people who attended.

“A series of seminars to talk about these issues deserves a lot of thanks,” he said.

Talks about water use are never easy and Babbitt is no stranger to the issues of water use and conservation in Arizona.

“Neighbors fall out. It divides people,” he said. “But, these are real issues and the solutions have to start at the local level with open minds.”

In 1980, the Arizona legislature formed the first Active Management Areas (AMA) covering Pima, Pinal and Maricopa Counties, he explained. They were formed because of the significant use of groundwater by development and agriculture.

“It was as controversial then, as this is now,” noted Babbitt. “But, there was a recognition that there had to be some kind of future for groundwater with some kind of management. It was a long haul, but we set out on a pathway and were able to get conflicting forces together to talk and listen.”

The AMAs would use Central Arizona Project (CAP) water from the Colorado River instead of groundwater.

“We did a great job with the AMA concept for three counties and the system worked. But, there was a totally different story for the rural counties,” Babbitt continued. “We were totally tapped out when we finished the AMAs, but we thought Arizona Department of Water Resources could do something as needed in rural Arizona.

“We could not have been more mistaken. We were absolutely wrong. The statutes were unworkable in the rural counties. AMAs were way too complex. They were designed for urban areas, millions of people and areas that were growing like crazy. It was successful for Tucson, Phoenix and Pinal County, but failed the rest of the state 100 percent.”

In the Douglas Basin, which also suffered a severe decline in groundwater, a non-irrigation expansion district (INA) was formed stopping any new agricultural endeavors while grandfathering in existing uses, he added.

“Now, we can’t afford to do nothing. The groundwater basins are all different and that’s why the authority over them should be in the hands of local communities. We need local government to step up,” he recommended. “I’m not confident we have the state legislators to deal with it. I don’t think a czar in Phoenix is the person to do it.”

In addition to Cochise County, Laz Paz and Mojave counties are also looking to preserve the aquifers on which they rely, he added.

“County governments have a lot of power. They have rights. It’s really time for state legislators to authorize counties to take ahold of the issues. Give them the authority,” Babbitt emphasized.

There was an attempt in 2015 to form a groundwater conservation area (CNA) to deal with the problem, but the state legislators did not support the grassroots, months-long organizational effort and denied the request.

He concluded, “Flex your muscles. Tell them you and your family want to live in the valley for the next 10 generations. We’d like to tell our grandkids, you can live here. But you can’t, faced with a water table that is on the decline.”

Mary Ann Capehart, University of Arizona Cooperative Extension Service WaterWise, spoke on the advantages of using rainwater harvesting for certain landscape or household uses or even as the only source of water for a home. She thought such systems would be useful to valley residents to save groundwater, in addition to water conservation methods.

There are numerous sizes and types of rainwater catchment containers ranging from a few hundred gallons to thousands, she explained. If a home is small, there are people now building rain roofs with the sole purpose of catching rainwater. Gutters are the main capture structures to funnel the water to the tanks.

Not all roofs provide quality water, though, she said. Asphalt or tar roofs are not appropriate for catchment systems, while metal is the best.

Yet, no matter what type of roof, all rainwater must be filtered in the first wash to remove dust, pollen and other types of contaminants critters that climb or fly can leave behind. And, if the water is to be used inside, further filtration to remove other contaminants is required.

Further water conservation can be realized by using gray water from taps, dishwashers and washing machines for outdoor uses, she recommended.

Kim Schonek, with The Nature Conservancy, explained ways farmers from Cottonwood to Fountain Hills and Prescott to Payson are using newer technologies to irrigate crops, or even change crops grown to those which use less water in the dry months rather than use water from the Verde River, and the aquifer which helps sustain it. The Verde flows south for 190 miles and creates a 6,600 square mile environment of open grasslands, forests and desert scrublands.

Most drinking water comes from groundwater sources, but surface water has been used for irrigating agriculture fields, gardens and lawns where landowners have the historic right to use the water.

The Verde River provides water for numerous activities from its headwaters north of Cottonwood to its confluence with the Salt River.

However, Schonek pointed out, the flow of the river has declined since 1990 by 37 percent on average in June, the dry period of the year.

With financial assistance from the Natural Resources Conservation Service (NRCS), water conservation methods and the establishment of conservation easements which eliminate dense development, Schonek said the situation will improve.

“We still have more to do to improve the health of the watershed,” she said. “But, some of the methods we use will help the Willcox Basin. Work with the NRCS and get your district office involved.”

The next and final workshop will held on Wednesday, April 8, from 12:30 p.m. to 4 p.m. in Sunsites at the Community Center and then from 5 p.m. to 8:30 p.m. at the Willcox Community Center. Holly Richter, hydrologist with The Nature Conservancy, will speak and water legislation over the years will be discussed.