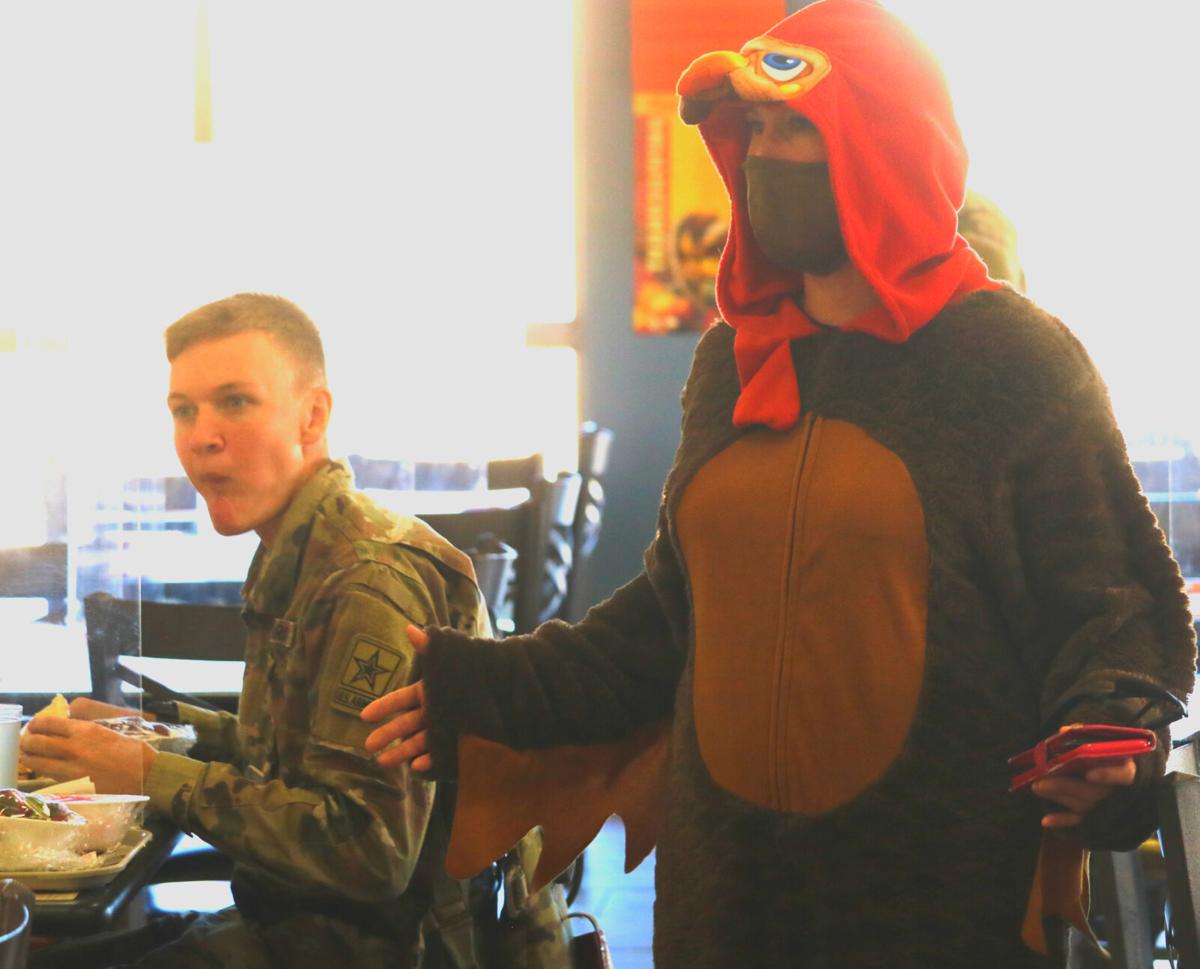 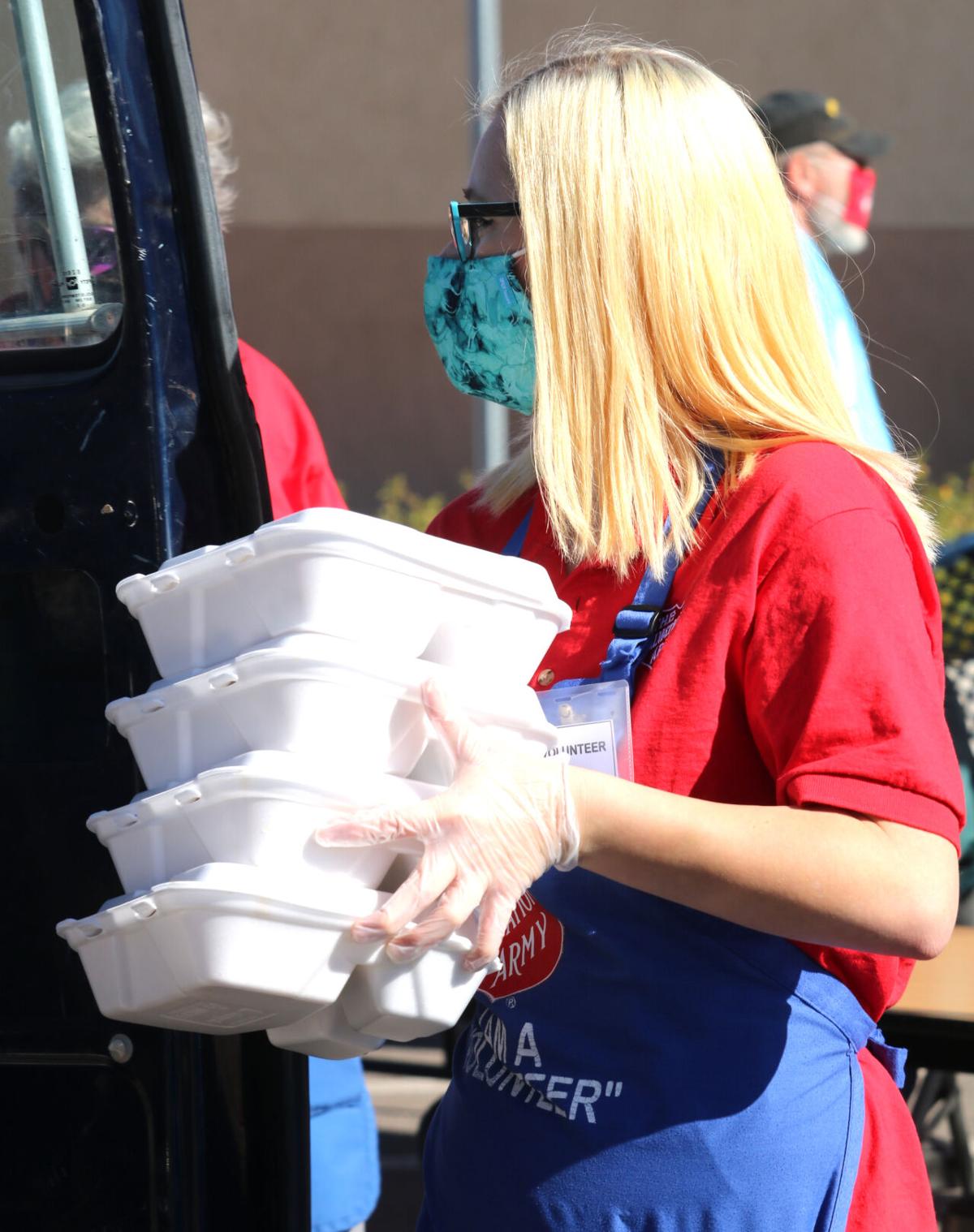 Ashley Baze, a volunteer for the Salvation Army, loads a car Thursday with meals for Thanksgiving. 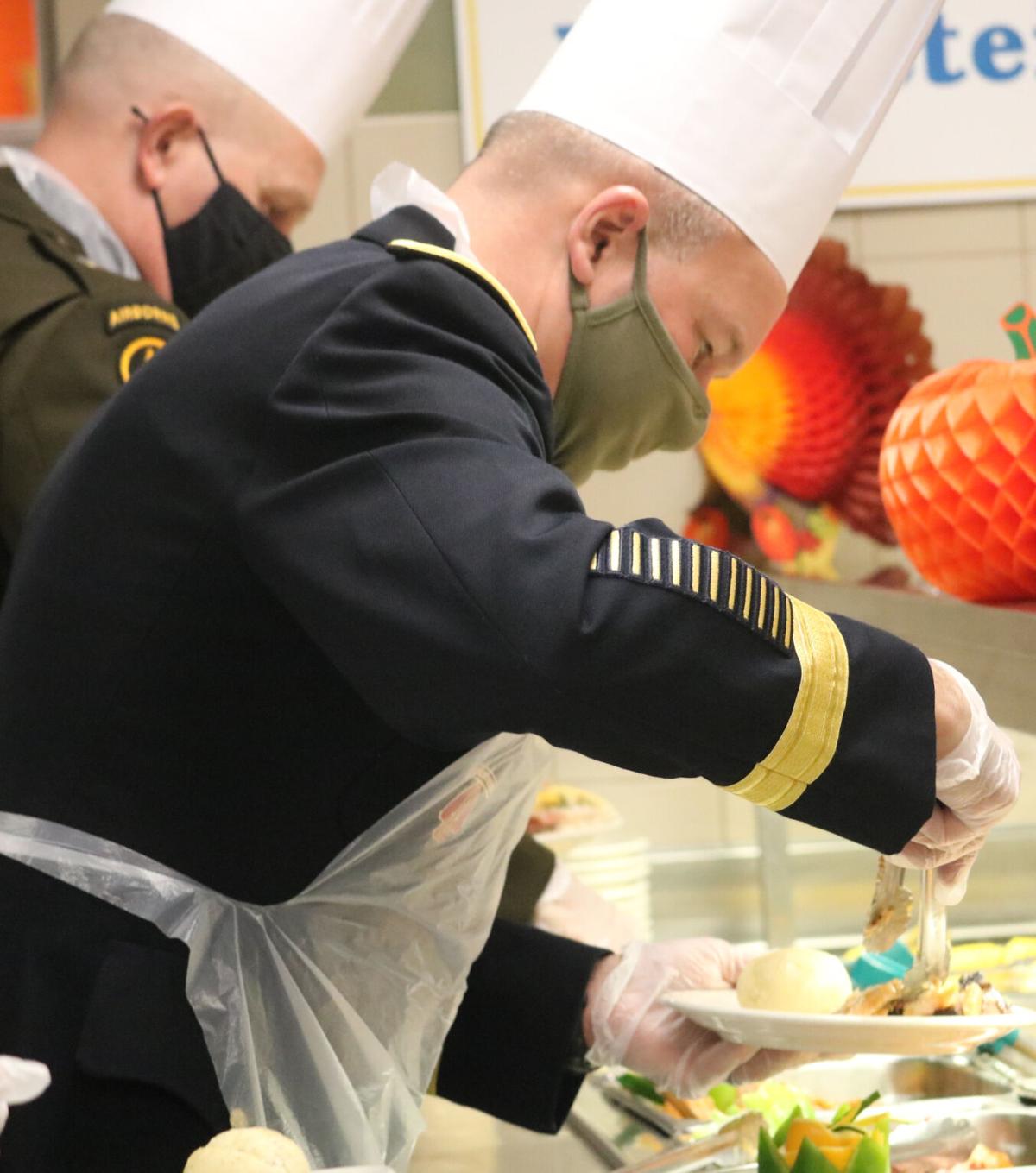 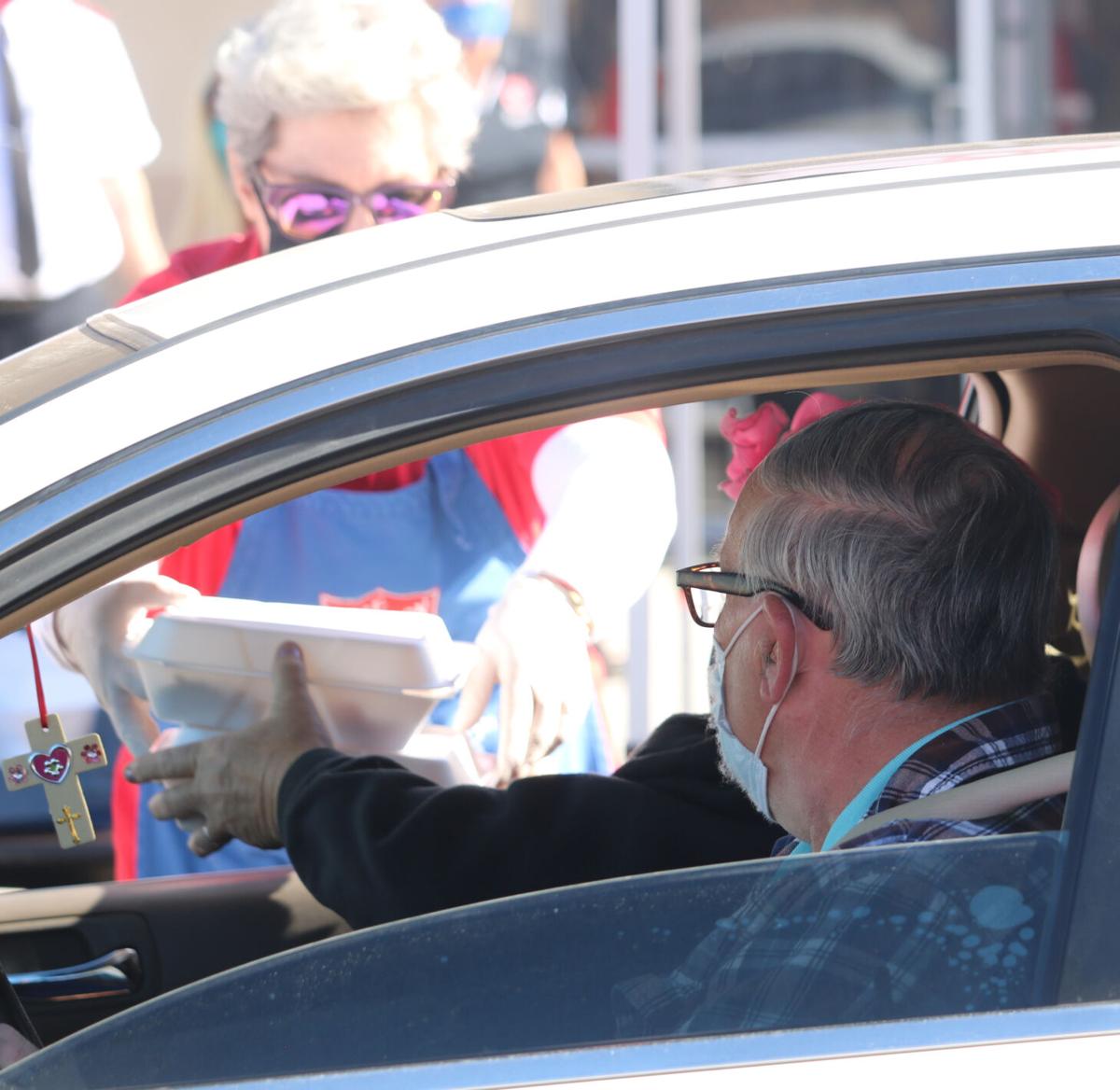 Lt. Ty Baze estimated about 600 individual meals were served on Thursday at the Salvation Army. 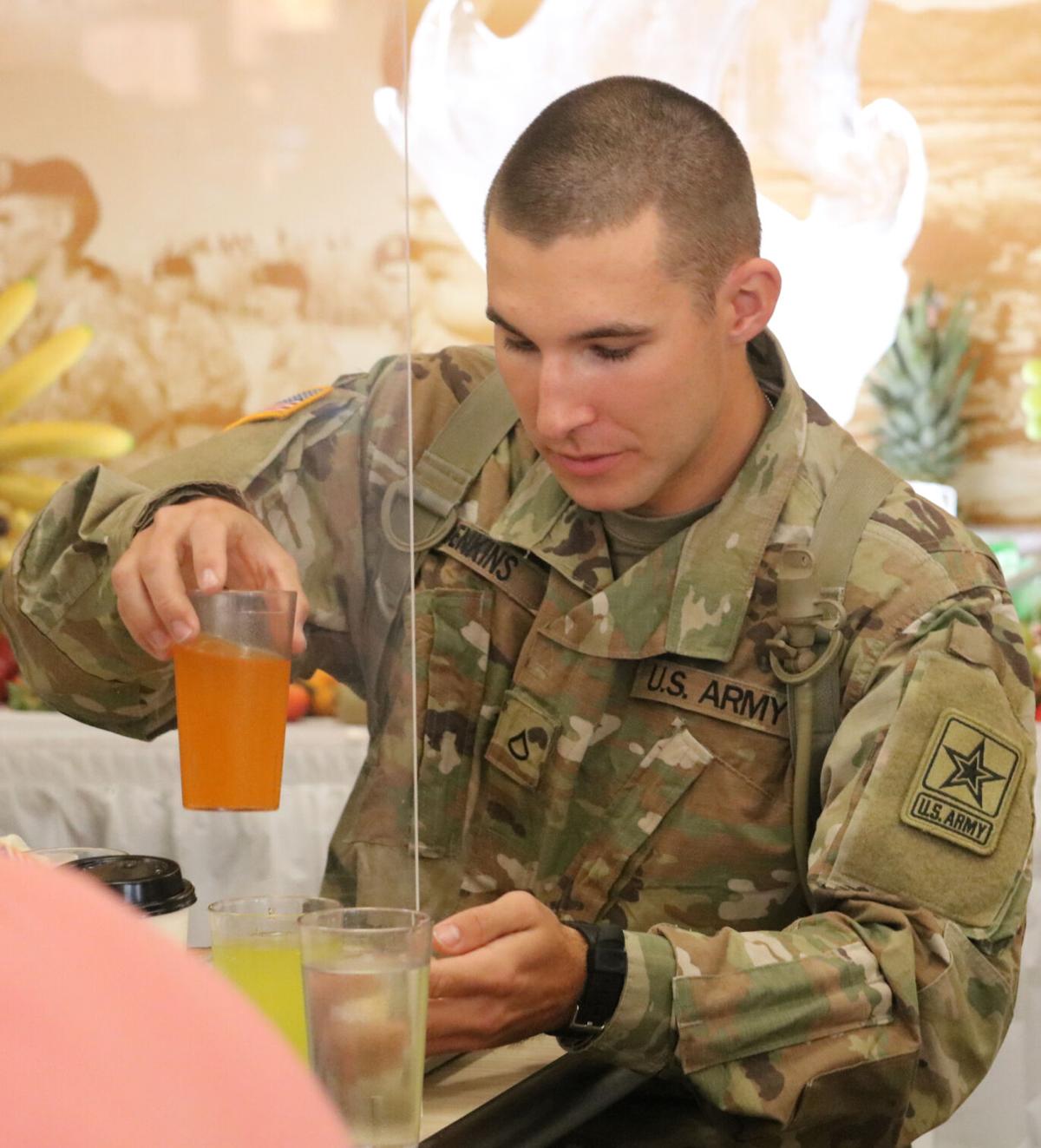 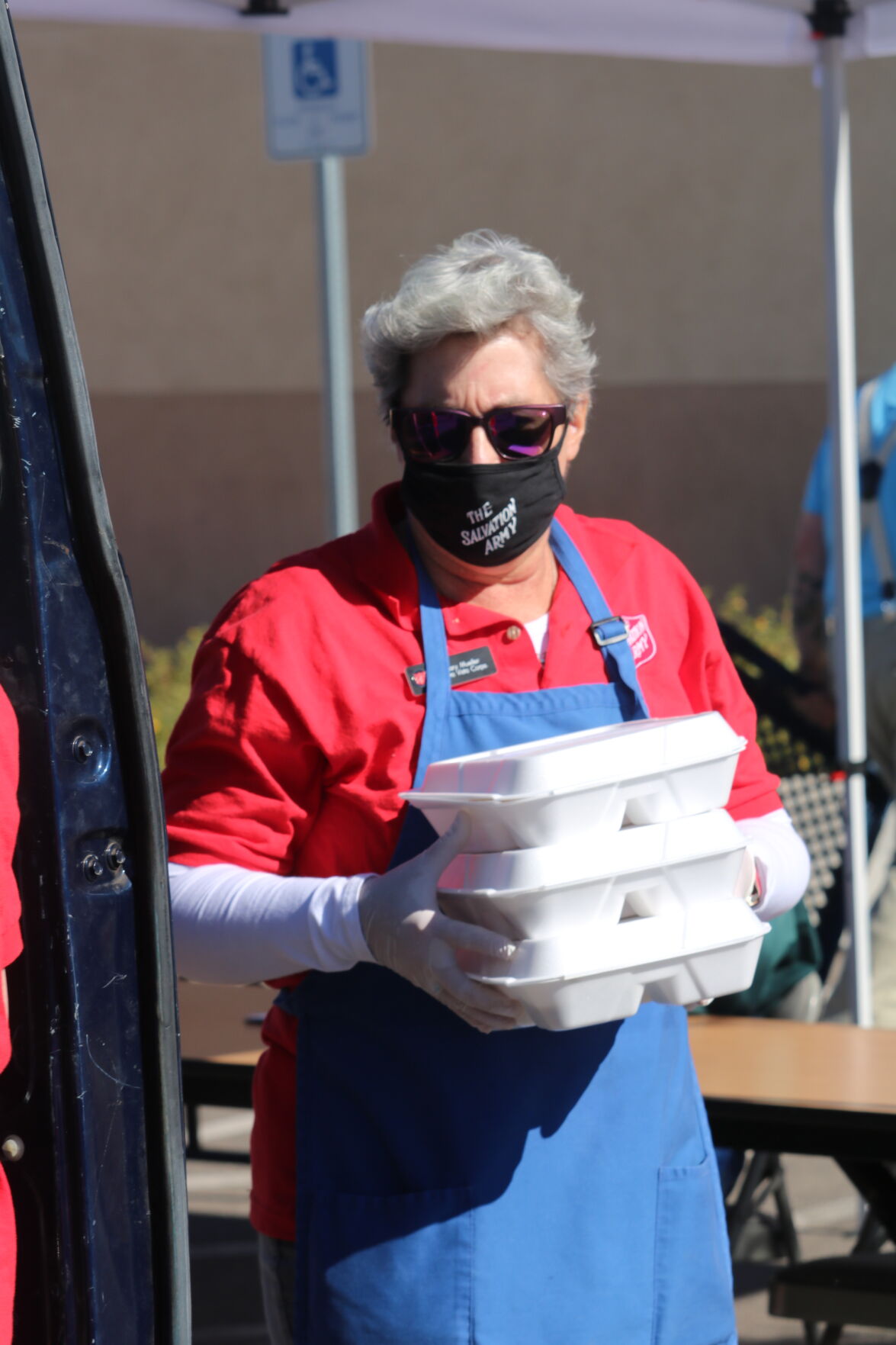 Mary Mueller brings boxes to a car during the Salvation Army's drive-thru event on Thursday.

Ashley Baze, a volunteer for the Salvation Army, loads a car Thursday with meals for Thanksgiving.

Lt. Ty Baze estimated about 600 individual meals were served on Thursday at the Salvation Army.

Mary Mueller brings boxes to a car during the Salvation Army's drive-thru event on Thursday.

SIERRA VISTA — Despite the scourge of COVID-19, Thanksgiving Day was not deterred, with a decades-old tradition observed on Fort Huachuca and a non-traditional meal-serving event at the Salvation Army.

For the most part, as is tradition in the U.S. Army, the commanders at Fort Huachuca were in their dress uniforms ready to serve dozens upon dozens of hungry young soldiers waiting outside the Weinstein Dining facility just before noon Thursday.

Commanding General Tony Hale and Command Sergeant Major Warren “Kelly” Robinson, among other leadership, donned plastic aprons and giant white chef-like hats so they could dish out the Thanksgiving Day meals to the soldiers flooding through the dining hall’s doors.

But one leader stood out among the rest because of her effervescence and her outfit.

Dressed in a furry turkey costume complete with a matching brown face mask, Lt. Col. T.J. Fearnow was walking among the soldiers telling them they could eat, eat, eat.

“Right now everybody is feeling a little bit of isolation from their family,” said Fearnow, a 19-year veteran of the Army. “We don’t have that same connection that we’ve had this year. It’s a time to celebrate that we have our Army family and that we’re all together.

“If I can just bring a smile to someone’s face who is feeling a little bit down today, then that’s what it’s all about, so I dress up as a turkey and here I am,” Fearnow said.

While the turkey garb would only be worn for about an hour, it was evident Fearnow’s plan was working. Several soldiers waiting in line for their grub indeed smiled as the lieutenant colonel greeted them.

Hale said leadership serving meals to soldiers on Thanksgiving and Christmas is a “longstanding tradition.”

“I will tell you that it’s important that the soldiers see their leadership on the holidays because they sacrifice, as well, being here during the pandemic, not being able to go home and be with their families,” Hale said.

“It’s just a longstanding tradition that we serve our soldiers on Thanksgiving to show our appreciation to them for everything they do,” he added.

Robinson agreed, saying that one of the Buffalo Soldier standards on Fort Huachuca is, “The more senior you are, the more people you serve.”

“And this is just a privilege and an opportunity for us to come in and just to typify as a standard, to serve the soldiers,” Robinson said.

After piling their plates with turkey, prime rib, ham, mashed potatoes and various desserts, soldiers sat down at tables outfitted with plexiglas partitions so they could celebrate safely.

One group of Advanced Individual Training (AIT) students who had just arrived on Fort Huachuca Wednesday from Fort Leavenworth, said they missed their families, but appreciated seeing the top brass spend time with them in the dining hall.

Jenkins said he was pleased to be able to speak to his family on Wednesday and early Thursday.

His AIT colleague, 26-year-old Kyle Messenger, who hails from Illinois, said he too missed his relatives, but was grateful for his companions from basic training.

“I’m just happy to be here with these guys,” said Messenger. “We all just got here together. I miss my family. But these are my buddies. We’re as close as we’re going to get. At the end of the day, we’re all in this together.”

A few blocks east of the installation at the Salvation Army on Wilcox Avenue, that sentiment was echoed by Lt. Ty Baze and his wife Lt. Heather Baze. The couple arrived in Sierra Vista in July and quickly learned that Thanksgiving Day here was usually a 200-300 meal event.

Even with the unwanted appearance of the pandemic, the Bazes still planned to go forward with indoor dining, but thought they would have eating “sessions” of 30 minutes or so, then a 15-minute clean-up to prepare for the next session.

But with the increase in COVID-19 cases in the area, the dine-in plan quickly changed to a drive-thru plan, Ty Baze said.

“We had to make a quick decision to keep our volunteers safe and everybody that would be coming in to eat safe,” he said.

Baze said about 600 meals were prepared for Thursday’s Thanksgiving Day celebration. That included food for people who walked up to the facility and individuals driving though.

Additionally, about half of those dinners — 300 meals — were picked up by volunteers from a handful of local churches so they could be delivered to people who are homebound, Ty Baze said. One family received 11 meals.

The flow of vehicles was non-stop beginning at 11:30 a.m. at the facility, 180 E. Wilcox Ave. Baze said the event would last as long as the food did. Meals were handed out in white styrofoam boxes and included turkey, stuffing, mashed potatoes and a roll. A smaller box included a slice of pie. Heather Baze said 89 pies were donated Wednesday. Volunteers cooked the meals, with prep work beginning Monday.

Sierra Vista residents Dave and Bonnie Casteel drove through in their white Honda and said they were excited to get home to eat their respective meals.

Dave Casteel said he and his wife usually eat lunch at the Salvation Army and they learned about the drive-thru event on Wednesday.

“They did really good, they did a lot of work, we appreciate what they do,” Bonnie Casteel said. “They’re very helpful to people and we appreciate them a lot.”