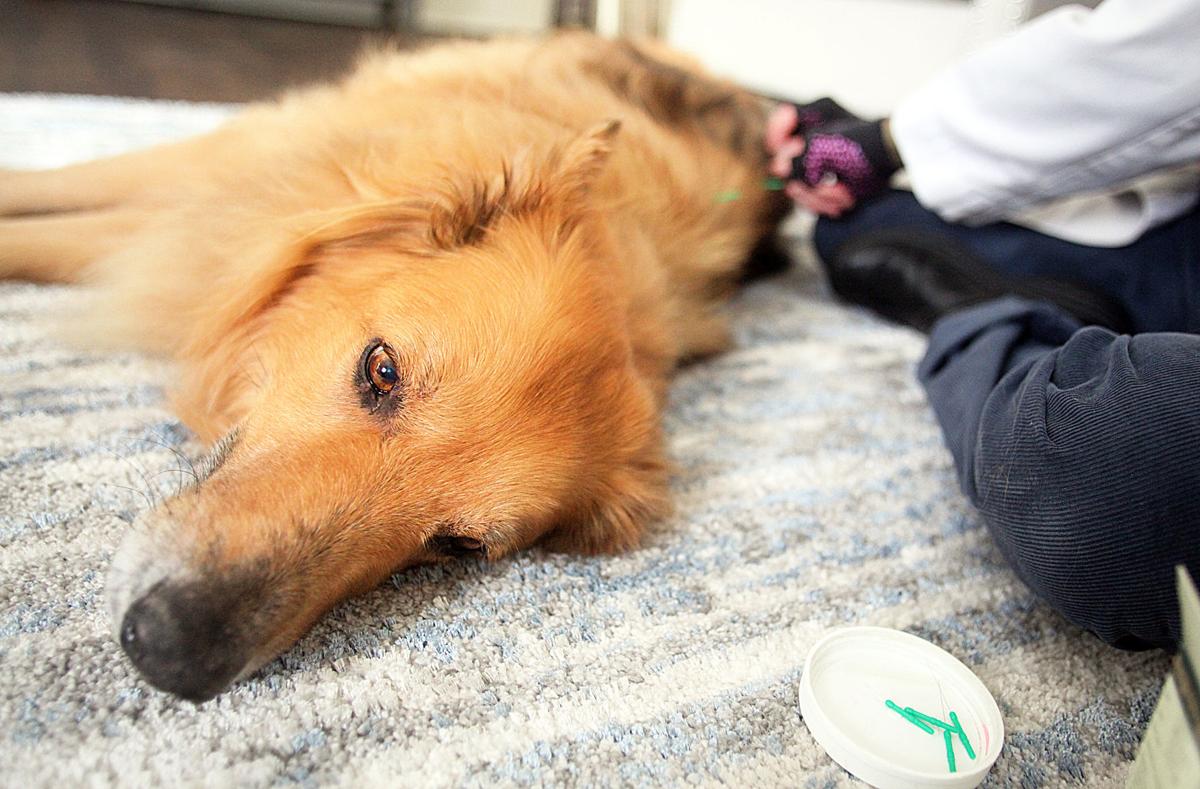 Thirteen-year-old Nietzsche relaxes while receiving an acupuncture treatment by Veterinarian Siobhan Jones in the comfort of his home Tuesday. 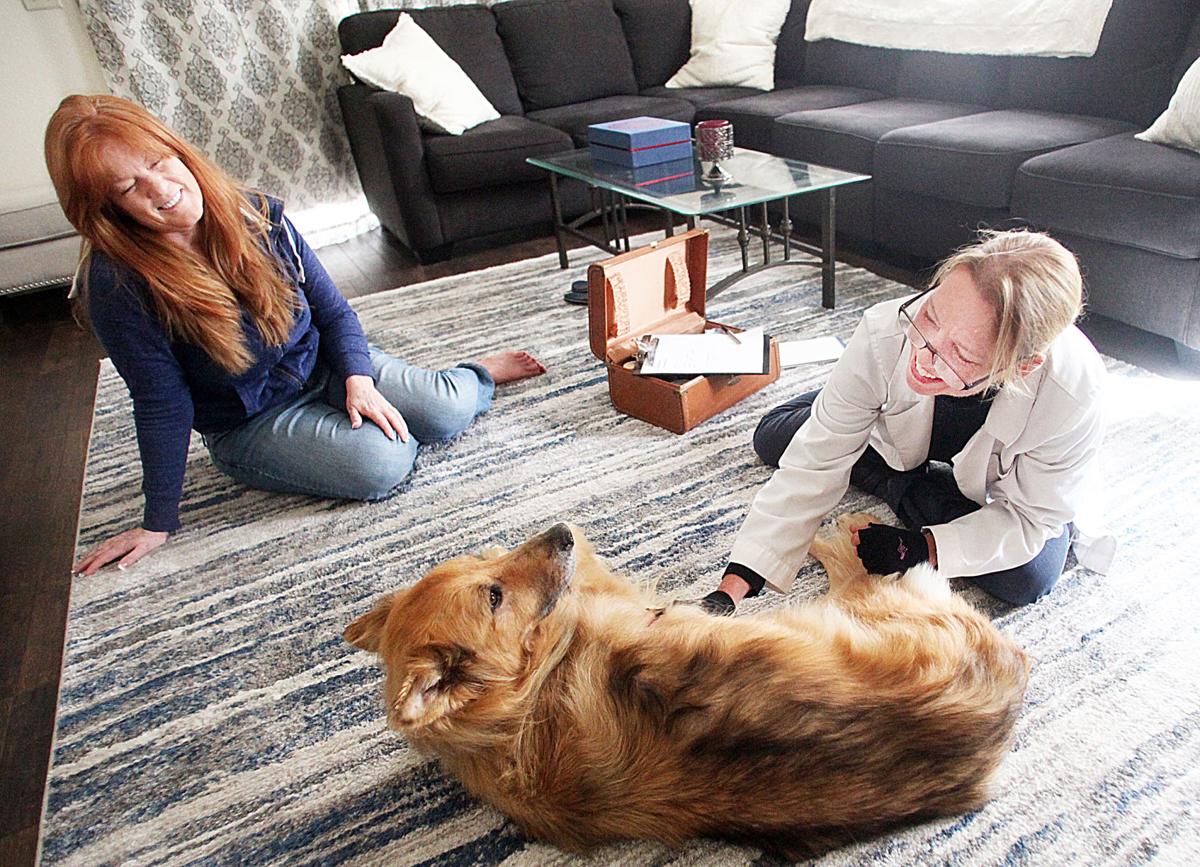 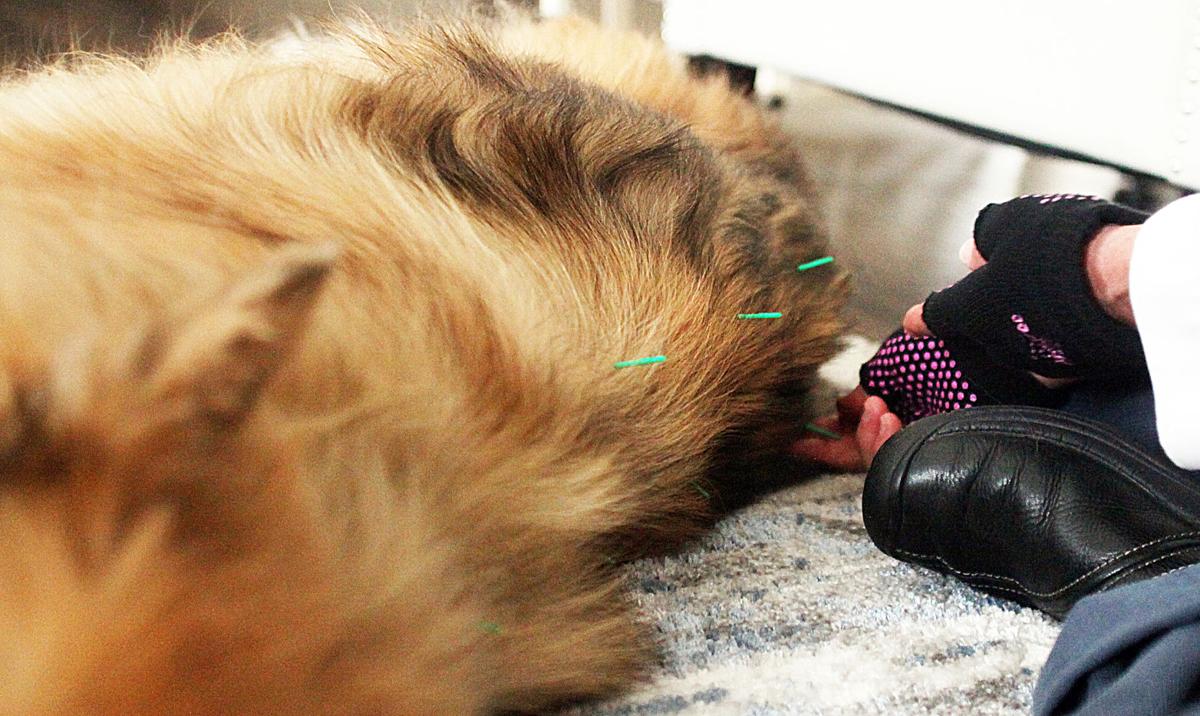 This is the third acupuncture treatment Nietzsche has received for his arthritis. 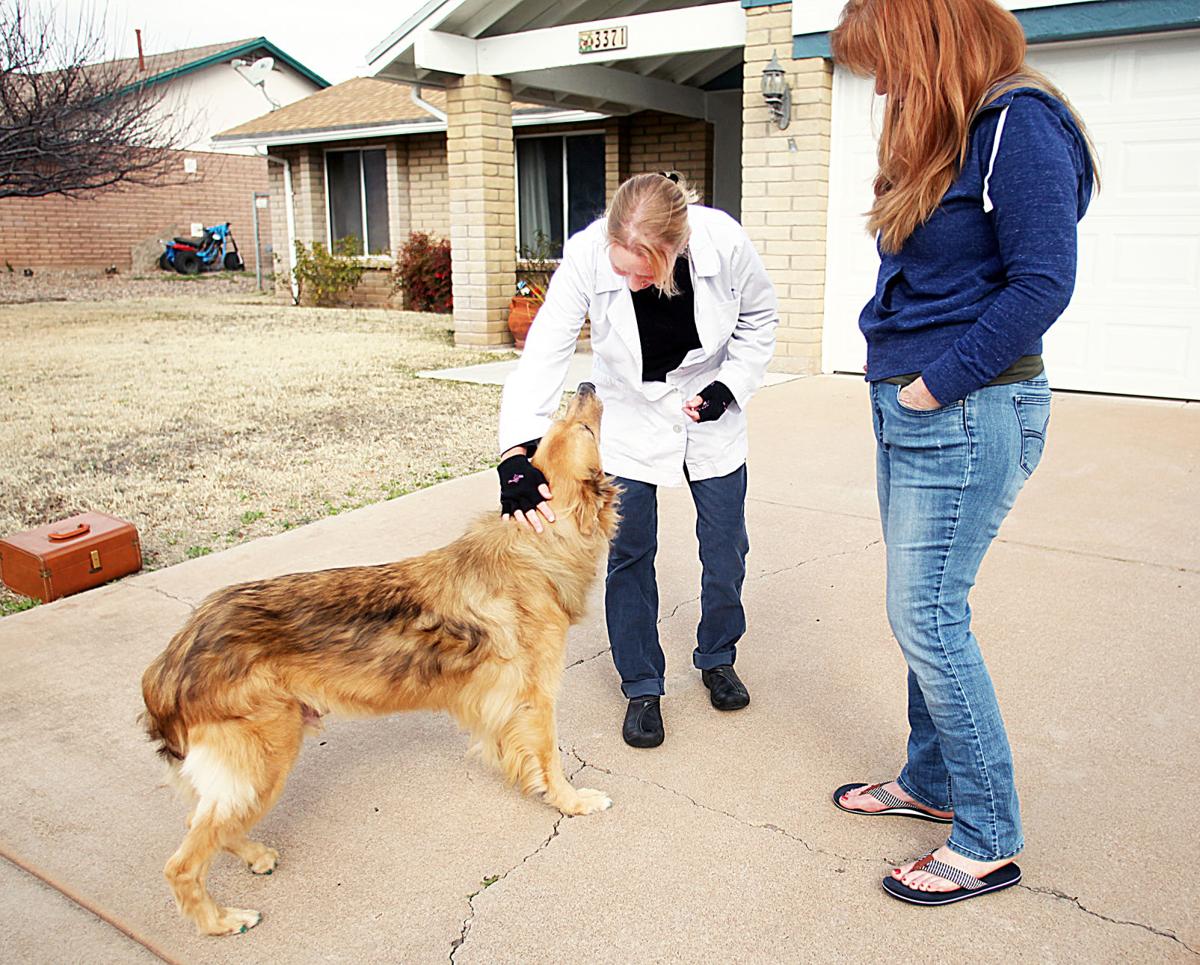 Thirteen-year-old Nietzsche relaxes while receiving an acupuncture treatment by Veterinarian Siobhan Jones in the comfort of his home Tuesday.

This is the third acupuncture treatment Nietzsche has received for his arthritis.

SIERRA VISTA — Veterinarian Siobhan Jones stepped away from conventional veterinary medicine in 2012 to provide her animal patients with alternative therapies.

Preferring house calls over a typical clinical setting, Jones has focused her skills on the whole animal, adopting holistic care as her treatment path. Through her mobile practice, “Dr. Jones Vet 2 U”, Jones specializes in acupuncture and massage therapy treatments for dogs and cats.

“Acupuncture can give surprising and nearly miraculous results, with no negative side effects,” Jones said of her holistic treatment approach. “Dogs and cats that are painful or ill for different reasons often respond beautifully to acupuncture. Most of the clients I see have tried every conventional modality, and don’t want their pet to go through surgery. That’s when they turn to me.”

Dog and cat owners throughout Sierra Vista, Hereford and Bisbee have seen “remarkable responses” in their pets after turning to Jones for acupuncture.

Stretched out on a carpeted area in the comfort of his home, Nietzsche, a 13-year-old collie mix, dozes while Jones places needles along his spine from his neck down to his pelvis.

“This is Nietzsche’s third acupuncture session, and I’ll be using between 8 and 10 needles on him,” Jones said, while sitting cross-legged on the carpet next to her patient. “He is responding beautifully to the treatments. I start with 10-minute sessions, and will gradually build up to about 20 minutes.”

Nietzsche suffers from spinal problems that cause weakness in his rear legs and wobbling while walking. For more than a year, he has been unable to wag or lift his tail because of pain and weakness in his lumbar spine, Jones said.

But that has changed.

“After his first acupuncture session, Nietzsche was able to wag his tail again and was much more mobile than he had been in months,” said Kathy Atkinson, his owner. “I’m amazed by how quickly he’s responding to the treatments.”

Nietzsche’s acupuncture sessions are to help ease pain and inflammation as an alternative solution to drugs.

“Kathy (Atkinson) was concerned about ramifications of conventional anti-inflammatories because Nietzsche has liver and kidney issues and is already taking several medications,” Jones said. “Drugs used for inflammation can be hard on dogs with kidney problems, so Nietzsche’s regular veterinarian, Dr. Schobert-Nichols, recommended that Kathy contact me. We started him on acupuncture treatments and are thrilled with his response.”

With every house call, Jones quietly evaluates and observes her patients and asks questions about the animal’s overall attitude and progress. Nietzsche’s treatments started about six weeks ago and will be repeated every other week as he builds up to a maintenance program. Along with acupuncture, Jones uses therapeutic massage on her patients.

‘I really appreciate the time she takes with the animal and how she pays close attention to my questions and concerns,” Atkinson said. “She is very compassionate and caring”

The “compassionate and caring” description resonates with several of Jones’s clients.

Debbie Kurtz, who babysits her daughter’s (Brenda’s) miniature dachshund, Brutus, describes him as her “granddog.” About three years ago, when he was 5-years-old, Brutus went completely “down in the rear,” and could not use his rear legs at all.

“He was paralyzed and could no longer use his rear legs,” Debbie said. “He had to wear a diaper because he had no bladder control and we had to carry him outside to express his bladder so he could urinate. He couldn’t play with our other two dogs and you could just see how depressed he was.”

Debbie and Brenda Kurtz were told the only hope for Burtus was back surgery.

“The problem with the back surgery is that it costs thousands of dollars and there was no guarantee it would work,” Debbie said. “A lot of people put their dogs down when they’re like this, but Brutus is part of our family, and that was not an option for us.”

When the Kurtz’s veterinarian told them about Jones and her acupuncture treatments they decided to give it a try.

“She was a godsend,” Debbie said. “Not only did she start Brutus on acupuncture, but she recommended getting him fitted with a cart so he could move around. Once we placed him in that cart, his whole demeanor transformed.”

Not long after Brutus started the acupuncture treatments, he started improving. He was able to stand again and gradually began to walk on wobbly legs.

“Dr. Jones showed us how to do exercises with his back legs to help retrain them so they would work again. With her acupuncture, care suggestions and the cart, Brutus got his legs back and is now about 95 percent functional,” Debbie said.

Brenda Kurtz praised Jones for her compassion, understanding and support during what she describes as “a very dark time.”

“Dr. Jones walked us through what to expect, answered our questions and concerns and suggested exercises and other things we could do to help him recover. She brought Brutus back to the happy dog he is today.”

Helen Weber had similar results with her cat, Neesa.

“Dr. Jones treated my cat with acupuncture because of arthritis,” Weber said. “She takes her time with the animal and because she does house calls, my cat was comfortable with the treatment because she was in her own environment.”

At the time of her treatments, Neesa was a 20-year-old cat that was having trouble walking.

“Right after the acupuncture sessions, her walking improved dramatically and she even jumped off the bed for the first time in months. Through her treatments, Dr. Jones gives animals more comfort and a better quality of life. I strongly endorse her, not only for the acupuncture, but for the vet that she is — for her caring, compassion and her willingness to take her time with us and listen.”

And the testimonials continue.

When Bill and Terri Ladd’s dog Lucky, suffered with severe lameness from an anterior cruciate ligament (ACL) problem on both rear legs, he had trouble moving.

“We had him on pain medication through our local veterinarian, and they suggested that we consult with an orthopedic surgeon,” Bill Ladd said. “Then our regular veterinarian recommended Dr. Jones. She came to the house and recommended an acupuncture treatment plan, which we agreed to try.”

Lucky is still on the monthly maintenance program and is exhibiting amazing results, Ladd said.

“Our friends who saw him when he was having problems, can’t believe how good he’s doing now. He runs and plays and acts completely normal. He’s basically pain free.”

The Ladds said they would “highly recommend” Dr. Jones to anyone with a pet that is going through joint pain or back issues.

“To find a vet that will come to your house and treat your animal right in their own environment is really amazing,” Bill Ladd said.

“I’ve always wanted to do house calls,” said Jones, who grew up in Ireland and was an avid James Herriott reader. “I love ‘All Creatures Great and Small,’ and have modeled my house call practice after James Herriott. He was one of my childhood heroes.”

Jones did her undergraduate work at University of California Davis, where her father, also a veterinarian, taught veterinary pharmacology.

Jones started her acupuncture training in 2007 in Germany, and followed up with training at Chi Institute in Florida and International Veterinary Acupuncture Society.

While in vet school, Jones would travel to Arizona to go backpacking, which is how she became familiar with this area.

“I fell in love with the state’s wide open spaces, dark skies and wildlife,” she said. “I moved to Southeastern Arizona and started practicing at Apache Animal Hospital, where I made a lot of contacts. In fact, veterinarians at Apache recommend my acupuncture treatments for select patients.”

When is acupuncture indicated for dogs and cats?

Veterinarian Siobhan Jones makes house calls to provide acupuncture and therapeutic massage to treat dogs and cats for a number of conditions, some of which include: