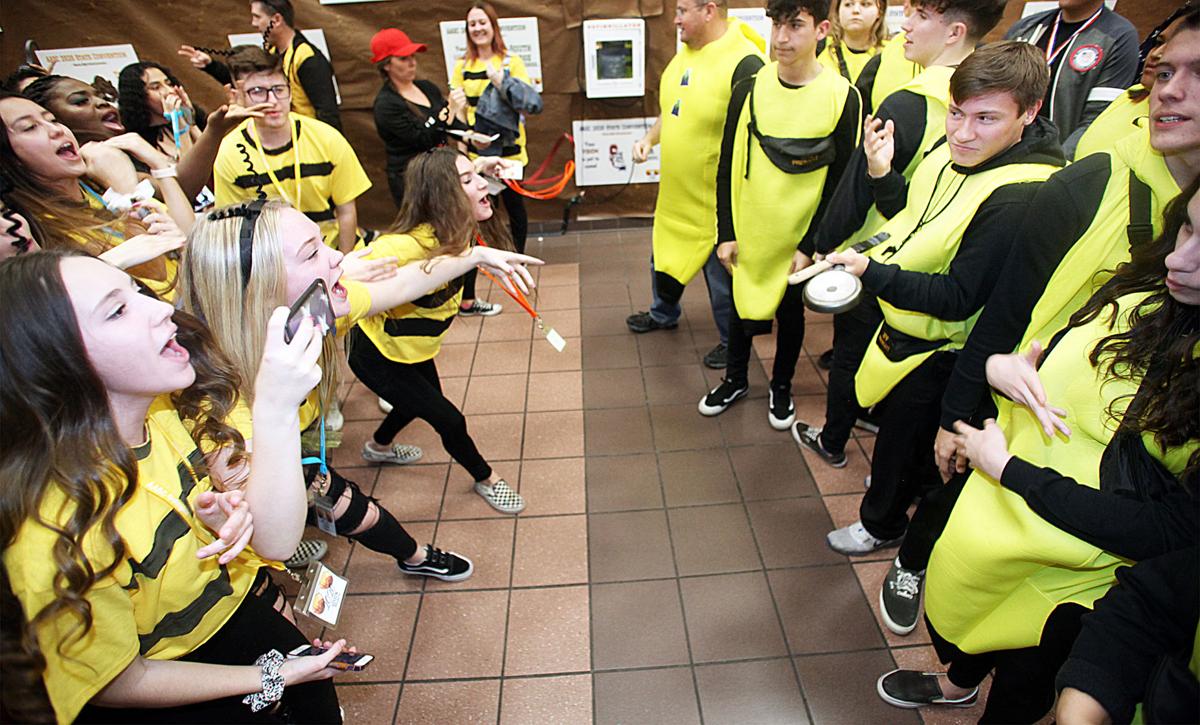 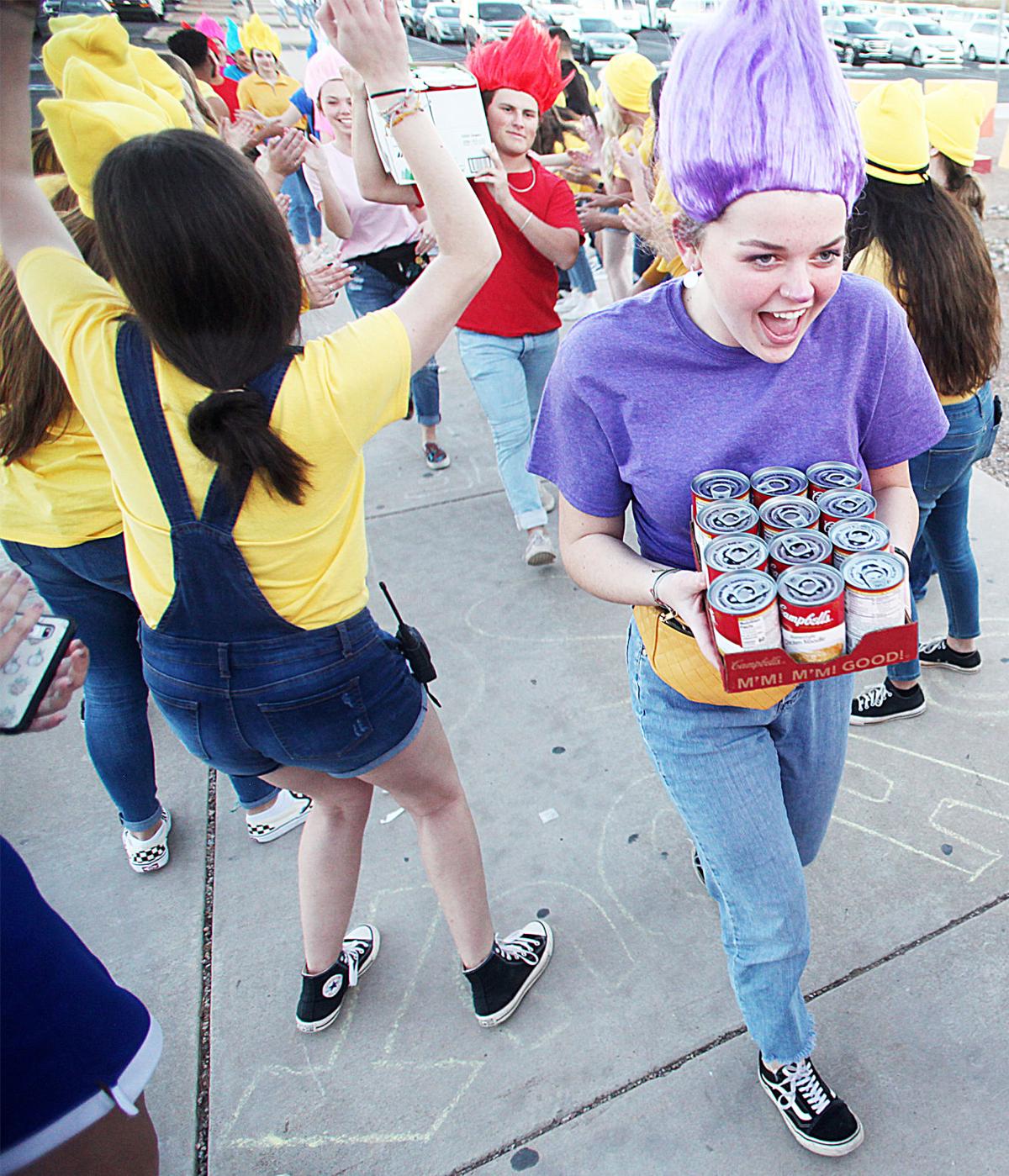 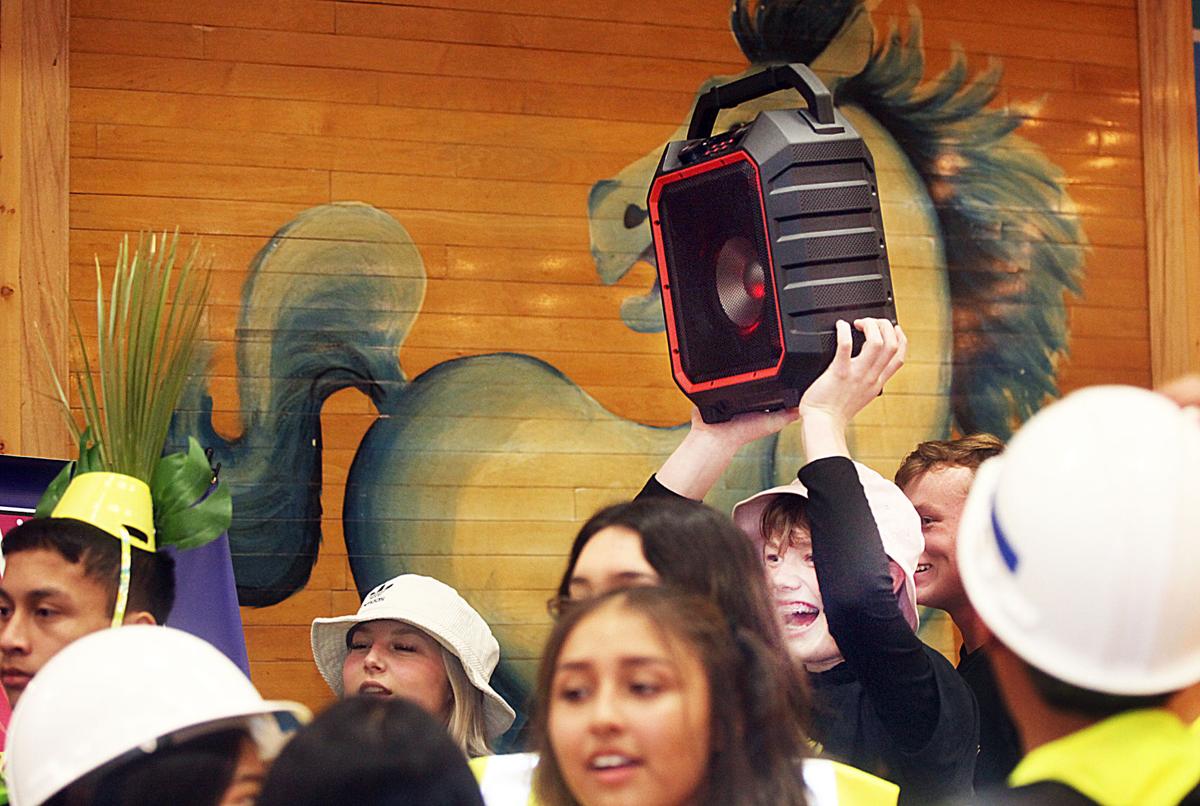 The halls of Buena High School will be abuzz with activity for the next couple of days for the annual conference. 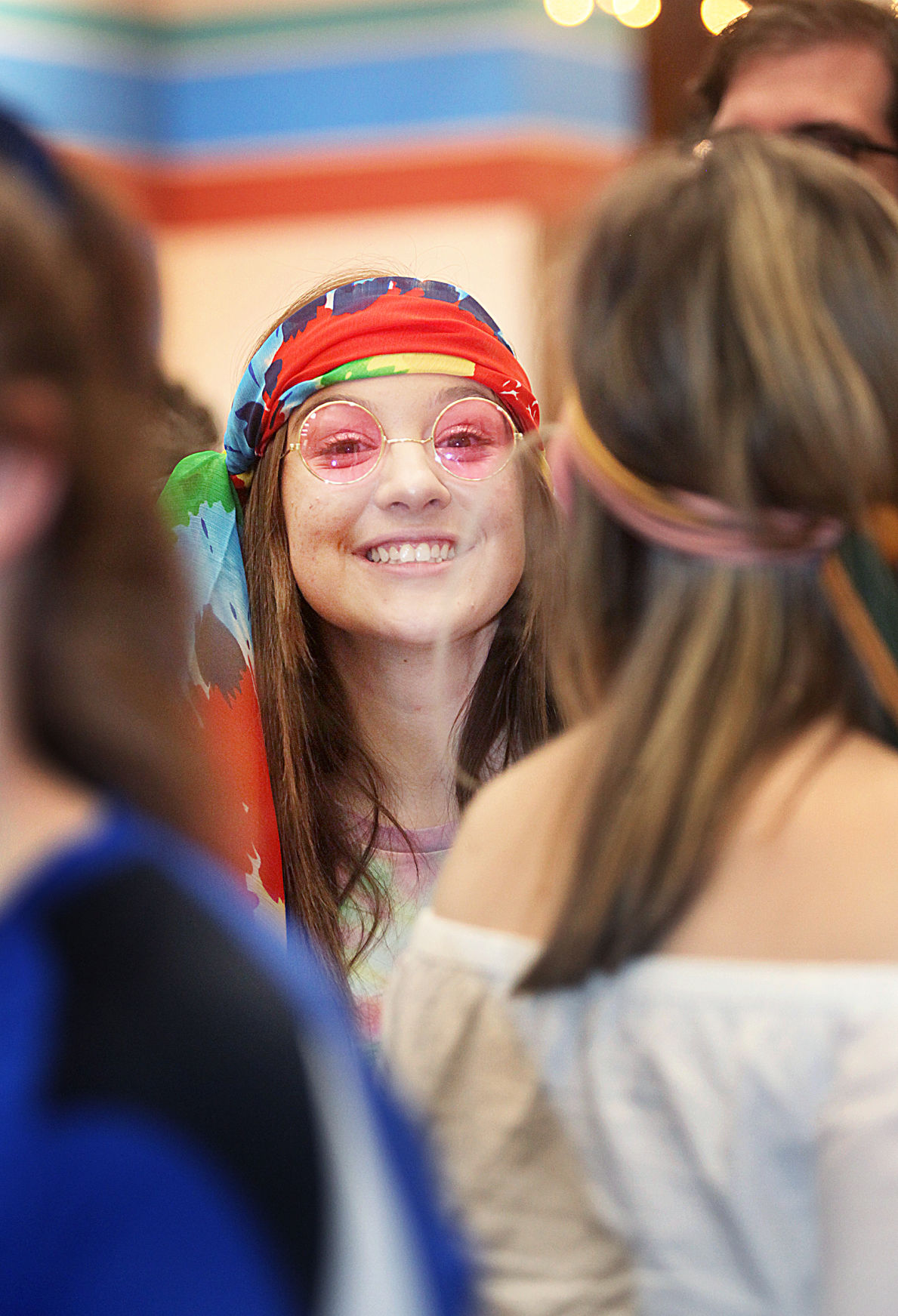 Each high school dressed in theme costumes during Thursday’s commencement of the annual Arizona Association of Student Councils. 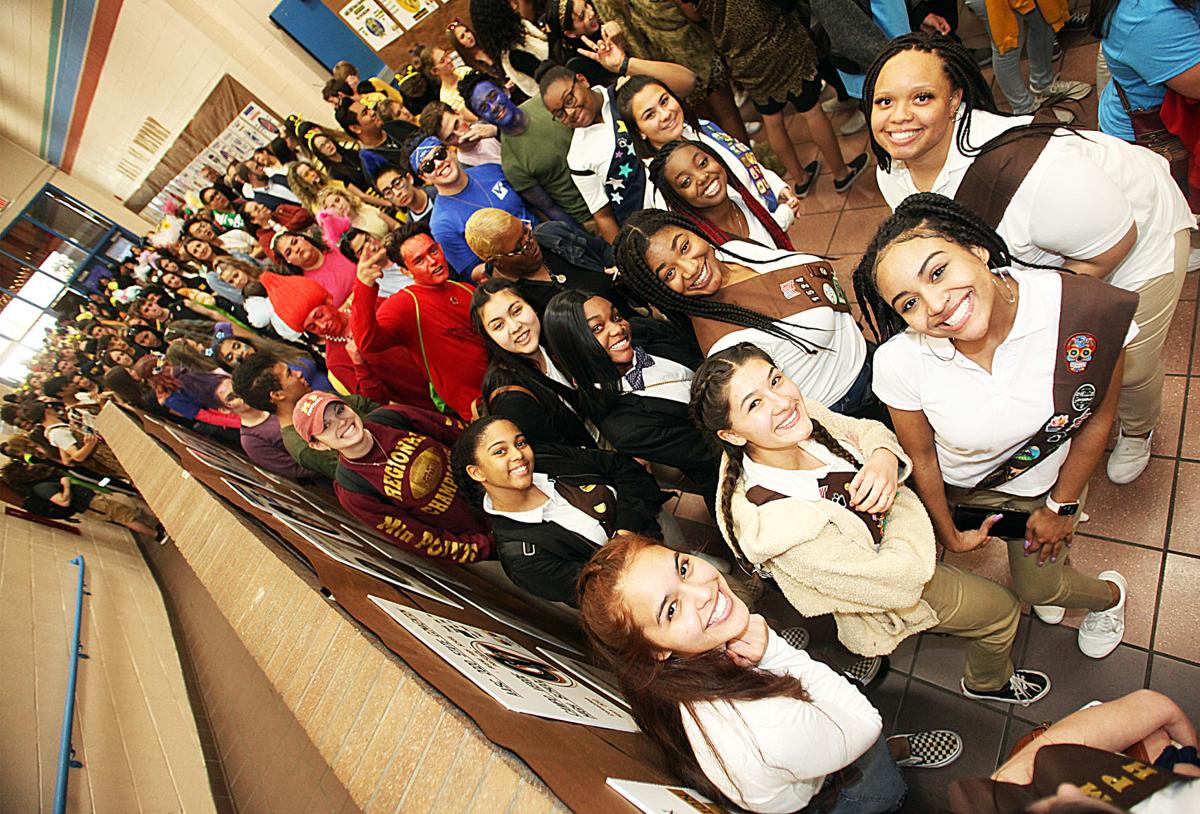 Students from about 170 high schools across Arizona line up to register at Buena High School Thursday for the Arizona Association of Student Councils gathering.

The halls of Buena High School will be abuzz with activity for the next couple of days for the annual conference.

Each high school dressed in theme costumes during Thursday’s commencement of the annual Arizona Association of Student Councils.

Students from about 170 high schools across Arizona line up to register at Buena High School Thursday for the Arizona Association of Student Councils gathering.

SIERRA VISTA — The energy level at Buena High School was off the charts Thursday evening when more than 2,000 costume-clad, chanting students packed the halls for the 86th annual Arizona Association of Student Councils.

Representing about 170 high schools across Arizona, buses from as far away as Flagstaff, Yuma, Camp Verde, Deer Valley, Gilbert, Glendale, Phoenix and Tucson rolled onto Buena’s campus where the visiting students were welcomed to a carnival-like atmosphere of music, dancing and exuberant cheers.

With its “Leadership Thru Teamwork” theme, Buena’s student council members decorated the school for the event and transformed the gymnasium into a convention center, complete with a stage, tables, audio-visual equipment and even more decorations.

“This is the first time AASC has been in Cochise County since 1955, and it’s the first time ever for Buena,” Student Council Advisor Dennis Nitschke said of the event, which got its start in 1934. Douglas High School hosted the county’s first AASC convention, Nitschke added.

“We knew that we wanted Buena to host AASC, but had to go through a bidding process in order to get selected,” said Buena Student Body President McKenna Heck. “We’re so excited this has happened for our school. This is my senior year, and we’ve been working on this since I was a freshman.”

Buena submitted its first bid in 2016 for the 2017 AASC convention, but was not selected, Heck said.

“We bid again in 2018, and got it for 2020. Every year, schools that are interested in hosting the convention put together a presentation that sells their city, their school and school spirit. The process is pretty involved and takes a team effort, so we were absolutely ecstatic when we were selected.”

While the entire council worked together on the bid package, Heck and other council members credit 2018 Buena graduate Jake Lane for compiling a winning video, showcasing Buena as the right choice to host for the convention, with Sierra Vista as an ideal city.

“Serving on this student council and putting this event together has been so rewarding,” she said. “It was a lot of work, but it’s been well worth it. For this to be at Buena during our senior year, is such a great feeling. Jake did a fantastic job of selling Buena and Sierra Vista through the video.”

Nearly 2,100 students and around 300 advisers are in Sierra Vista for the event, which started Thursday afternoon and will be going until noon Saturday. Local hotels are completely full, with some of the visitors turning to Benson, Tombstone and Bisbee for accommodations.

A few schools started arriving Wednesday to allow enough time for sightseeing before leaving the area, while others are planning to stay through Sunday.

While at Buena, the students will be attending general sessions, listening to inspirational messages from keynote speakers Tyler Duram, Lilyan Prado Carrillo and Evangeline Parker, and participate in panel discussions.

Entertainment, dances, awards presentations and plenty of free time to explore local attractions have been incorporated into the program.

“On Friday we’re going to have a ‘Small Town Success Panel’ where we have invited Buena graduates to come here and talk about their accomplishments,” Heck said. “Brandi Malloy, a former Miss Sierra Vista pageant winner who now works for Food Network will be here, as well as Derek Hall, a college athlete. Brianna Tomooka, an Arizona State University zoology student will be on the panel, and we’re also going to have Sierra Vista Police Chief Adam Thrasher as one of the participants.”

When arriving at Buena on Thursday, students and their advisers came in costumes, dressed as vikings, trolls, bumble bees, Harry Potter characters, aliens, work crews, emergency responders and action figures, to name a few of the more popular selections.

“The energy here is insane; I love it,” exclaimed Parker Fowler, a Greenway High School student from Glendale, who sits as his school’s student body president. “Buena High School really went all out — the decorations are amazing and this school’s energy is amazing. I’ve been going to these conventions all four years of high school, and this is by far the best decorated one I’ve been to.”

Aysia Carzoli, a sophomore from Marana, said she really liked how welcoming Buena was.

“They even had ‘Welcome ASCA’ signs about five miles from the high school, welcoming us to Sierra Vista,” she said. “I thought that was a really nice touch. And now that we’re here, I can’t believe the energy and enthusiasm. It’s incredible.”

Carrie Nelson, a Bourgade Catholic School teacher from Phoenix, came to the convention with four students and one other adult, dressed as Bob the Builder.

“There’s a lot of energy in this hall,” she said while listening to groups of chanting students. “Everyone is having a great time, and they’re just getting started.”

“As the student council president, I want to thank Mr. (Dennis) Nitschke for all the guidance he’s given us while we worked on this event,” Heck said. “Also Lisa Gustafson at the chamber of commerce helped us coordinate hotels and local businesses. Looking back, this has been a fantastic large-scale learning experience for all of us, and we could not have done it without all the support we received.”