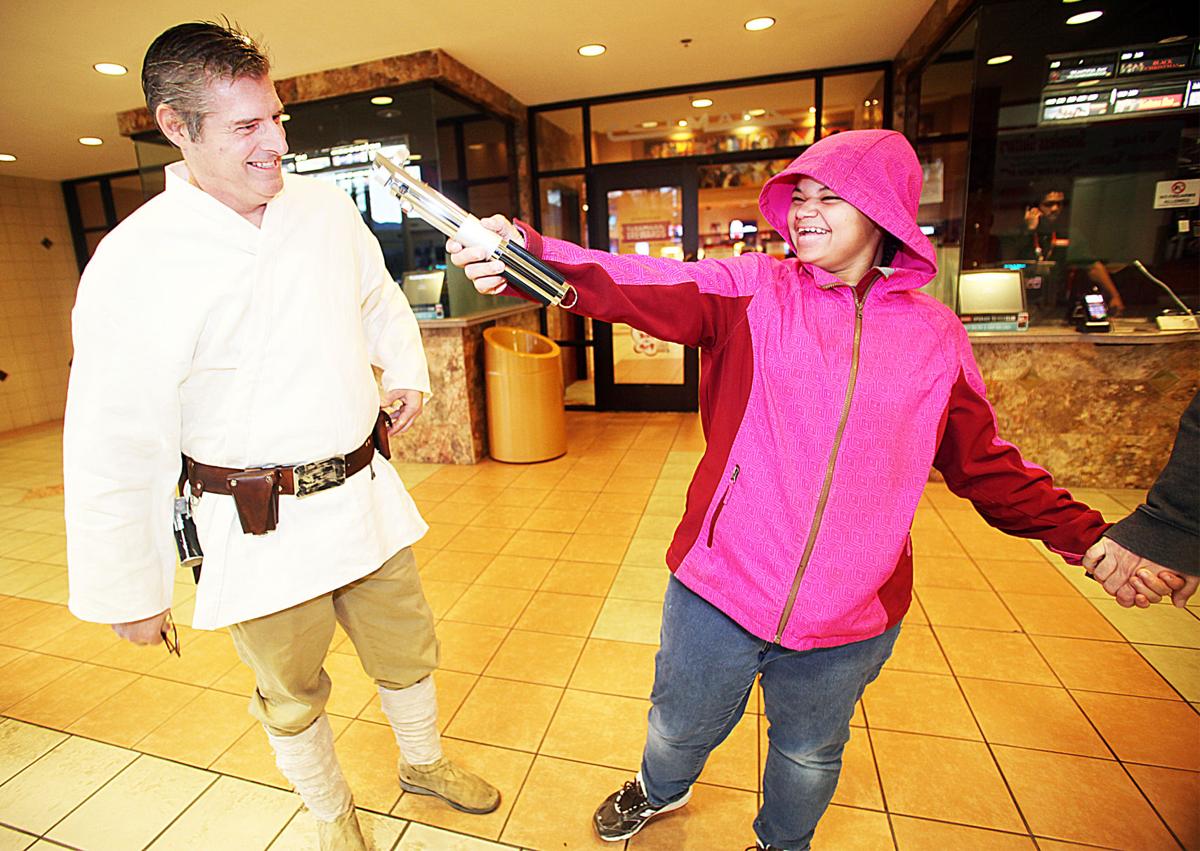 “Star Wars” aficionado Chris Cooper showed up in his Luke Skywalker apparel at Thursday’s screening of the newest installation of the series, “The Rise of Skywalker”, at the Cinemark 10 Theater Thursday night. Movie fan Victoria Romanak tries out Cooper’s prop lightsaber. 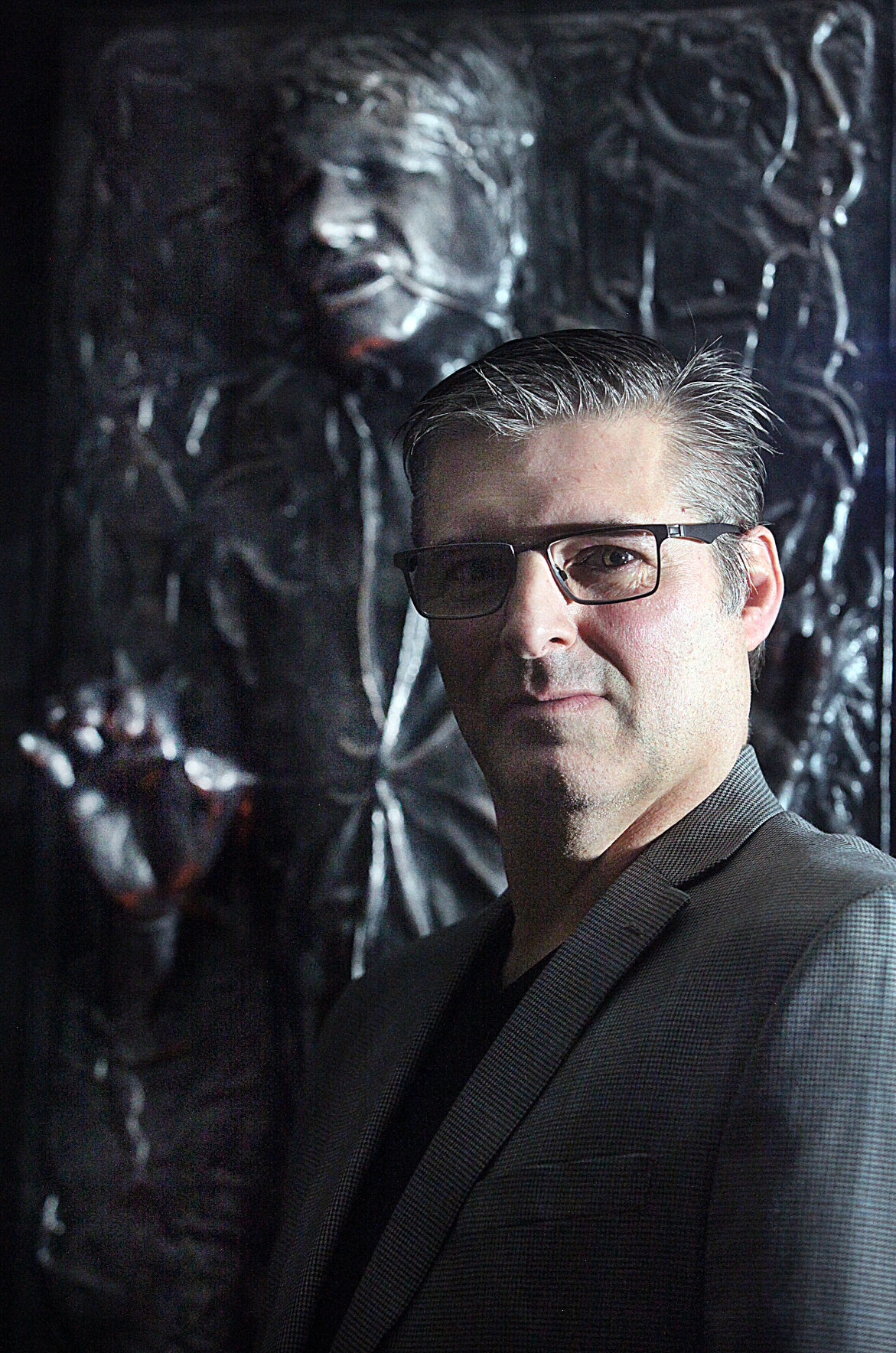 “Star Wars” enthusiast Chris Cooper stands in front of one of his newer acquisitions, a replica of Han Solo imprisoned in carbonite at his home in Sierra Vista. 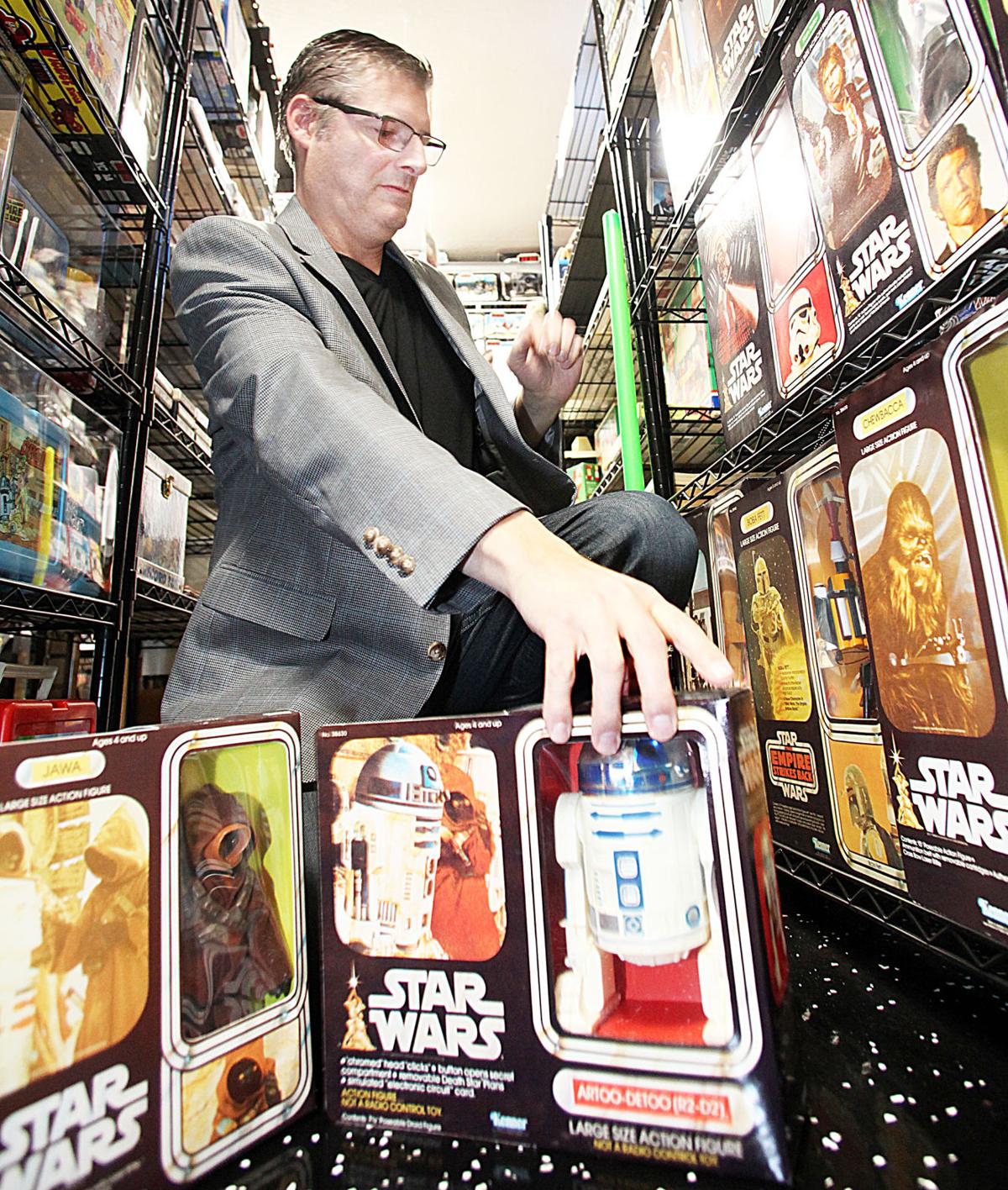 Chris Cooper goes through some of the action figures in his “Star Wars” home museum. 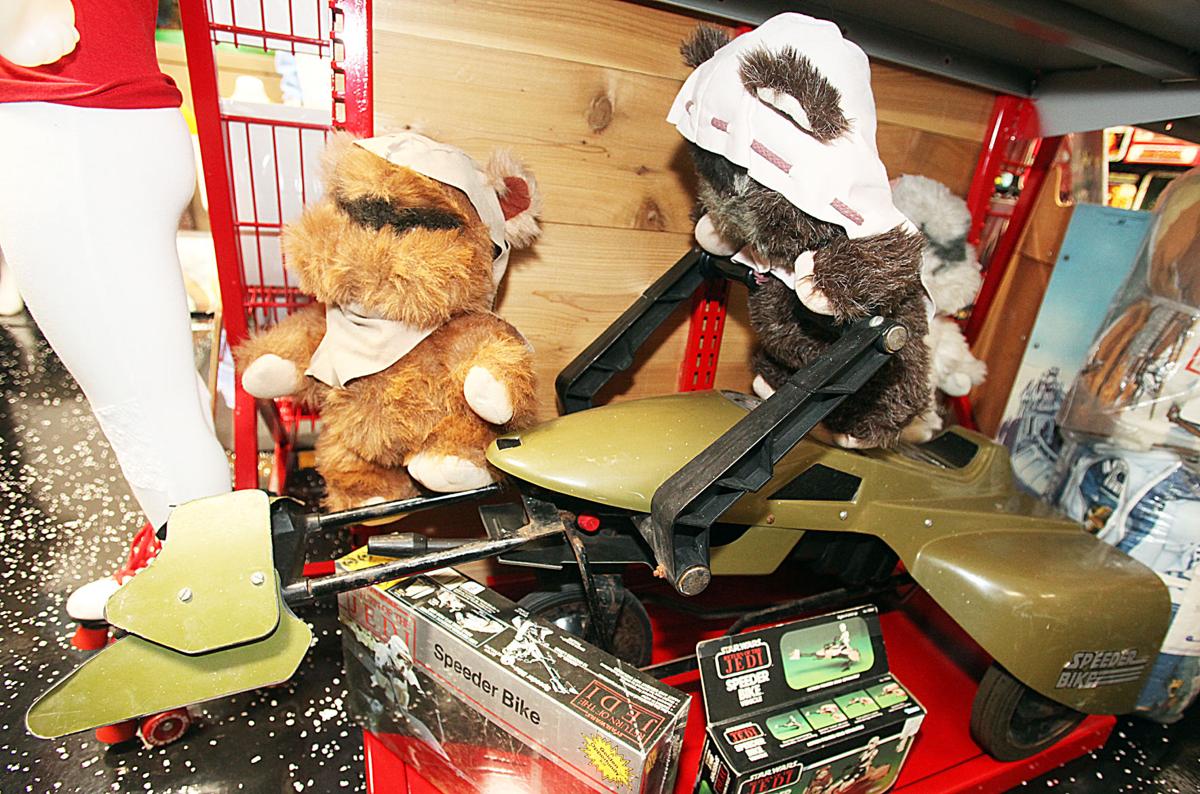 Cooper has many rare “Star Wars” items, such as this speeder bike toy from “Return of the Jedi.”

“Star Wars” aficionado Chris Cooper showed up in his Luke Skywalker apparel at Thursday’s screening of the newest installation of the series, “The Rise of Skywalker”, at the Cinemark 10 Theater Thursday night. Movie fan Victoria Romanak tries out Cooper’s prop lightsaber.

“Star Wars” enthusiast Chris Cooper stands in front of one of his newer acquisitions, a replica of Han Solo imprisoned in carbonite at his home in Sierra Vista.

Chris Cooper goes through some of the action figures in his “Star Wars” home museum.

Cooper has many rare “Star Wars” items, such as this speeder bike toy from “Return of the Jedi.”

SIERRA VISTA — Stepping into Chris Cooper’s garage in Sierra Vista is like entering a galaxy far, far away.

“I’ve been collecting ‘Star Wars’ memorabilia from the time I saw the original movie in 1977 as a 7-years-old,” said Cooper, who attended the movie with his older brother.

And Thursday, Cooper was one of many fans preparing to witness the final chapter of Lucas’ saga when “The Rise of Skywalker” opened in theaters nationwide.

Back when Cooper first became interested in “Star Wars” and its assorted memorabilia, it wasn’t as a collector.

“I played with ‘Star Wars’ toys, and I had the books and other items, but I didn’t take care of them. My collector’s craze actually started after I reached adulthood,” he told the Herald/Review ahead of Thursday’s showing.

Once Cooper started collecting “Star Wars” memorabilia, it became an obsession. The collection includes anything and everything “Star Wars” produced between 1977 and 1985, he said.

“It’s like a ‘Star Wars’ time capsule that I’ve accumulated over the past 42 years.”

So, it probably comes as no surprise that Cooper arrived at Thursday’s final “Star Wars” journey dressed as Luke Skywalker himself.

“Tonight’s big premiere represents chapter nine, which finishes all the ‘Star Wars’ chapters,” Cooper lamented during a phone interview. “Tonight all this comes to an end. I like the original trilogy that I grew up with.

All of Cooper’s pieces are from 1977 through 1985, with his collection trailing off where the trilogy toy line stopped.

Along with assorted toys, video games, clothing, posters, cereal boxes, jewelry, action figures, and countless other pieces, Cooper has added life-sized mannequins and a promotional tape from 1980 to his collection.

He believes it’s the largest collection in the country and one that continues to grow.

“The magical moment for me is watching the amazed faces of people who come here and look at the displays,” Cooper said. “They are constantly amazed by how much I change it from one time to the next. I have different mannequins, shelving and collectibles and I change the displays about every six months to keep the collection fresh and interesting. It’s like a museum.”

Careful to keep everything in immaculate condition and properly showcased, Cooper says all the thousands of pieces in his collection come with a story.

“Every single one of these pieces has a history,” he said.

While he plans to keep adding to the collection, Cooper said after 25 years, he and his wife had a heart-to-heart talk about his obsession.

“I promised to start slowing down on what I collect,” he said. “We have a 2,200 square-foot house with a two-car garage, and we’ve now outgrown our house. My wife (Sheila Cooper) loves and supports me, but that doesn’t necessarily mean she supports the collection,” he laughed.

“She works as a realtor for Keller Williams Realty and is out there every day looking at different homes for a permanent residence to house this enormous collection.”

The biggest part of Cooper’s collection is housed in storage, with about 10 percent displayed in the garage, which he calls his man cave.

Even though Sheila admits that she is not a “big ‘Star Wars’ fan,” she admires her husband’s passion.

“I’m glad he’s passionate about something,” she said. “What impresses me most is how detailed and organized he keeps the displays. He really takes the time to stage his collection in a pleasing way that people appreciate.”

“When somebody has that kind of passion for something, it’s really hard not to get behind it and be supportive,” she said.

Sheila also touched on the need for a larger house.

“The collection has gotten so much recognition, it would be nice for him to have larger space to showcase it,” she said. “So, a much larger garage or workshop is on our ‘must’ list.”

Like her husband, Sheila said she enjoys the smiles on visitors’ faces when they see the collection.

In order to give the garage a rich, “Star Wars” feel, the floor has been professionally coated with a high-gloss black epoxy splashed white speckles to emulate a field of stars.

“It gives the garage a beautiful effect,” he said.

Cooper’s family is both proud of the collection and stunned by how much it’s grown and changed through the years.

“My 7-year-old son, Andrew, has taken a huge liking to his dad’s collection,” said Cooper, who expects he will represent the next generation of Coopers to carry on the family’s “Star Wars” tradition.