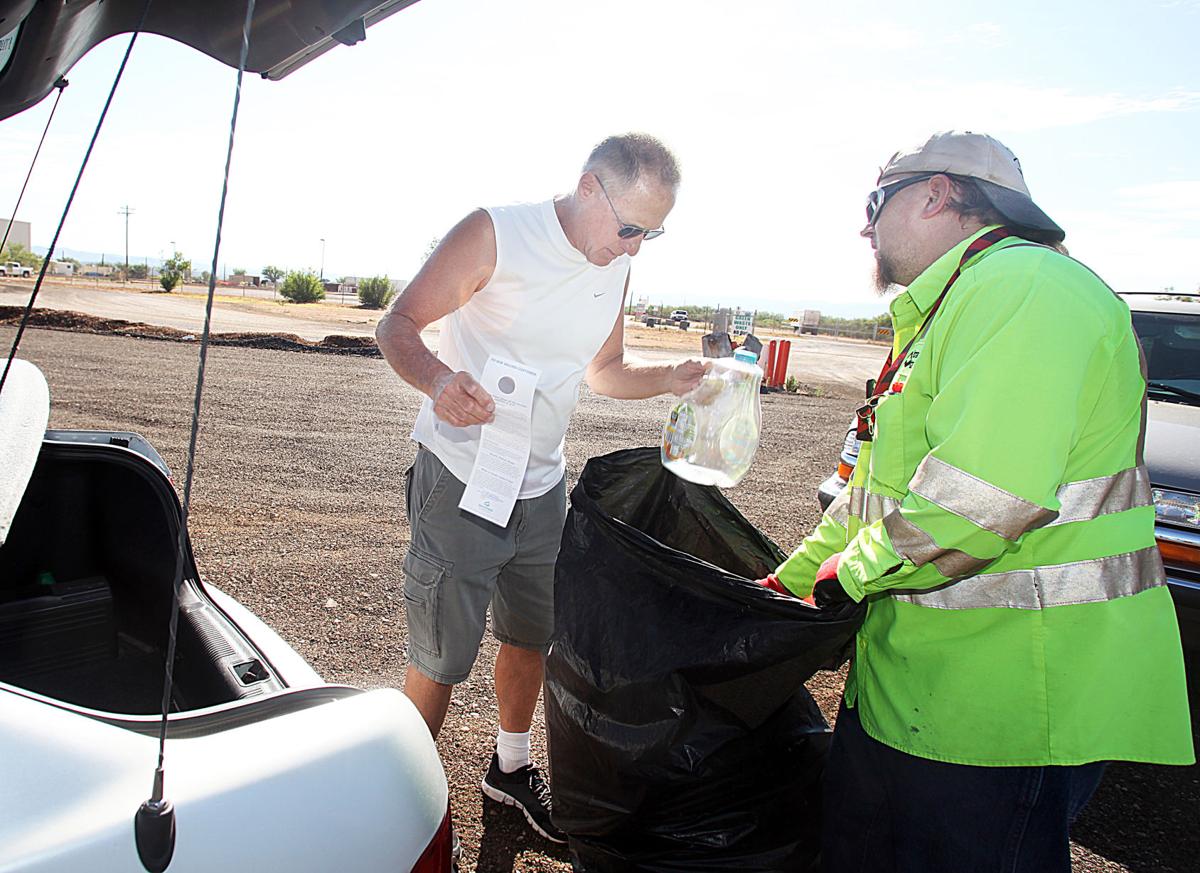 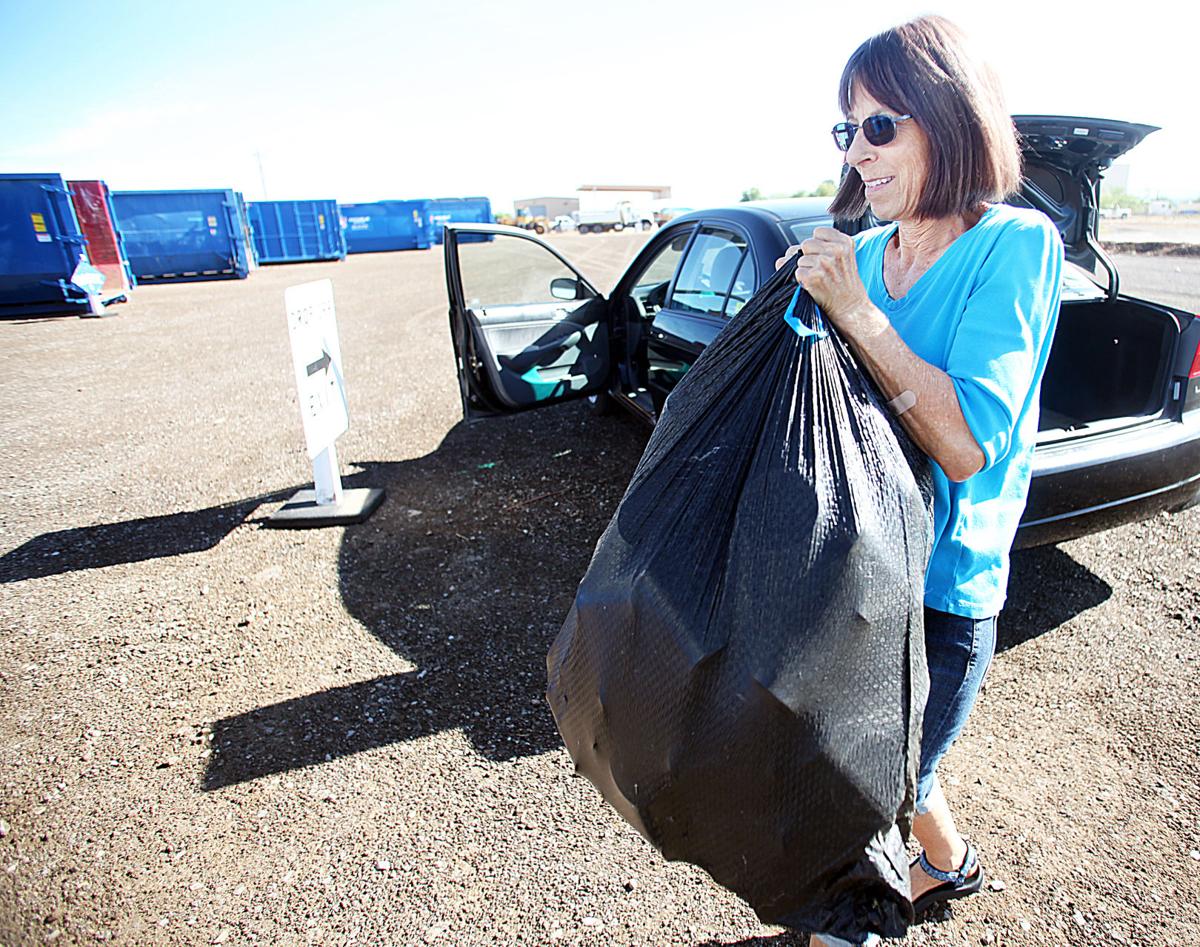 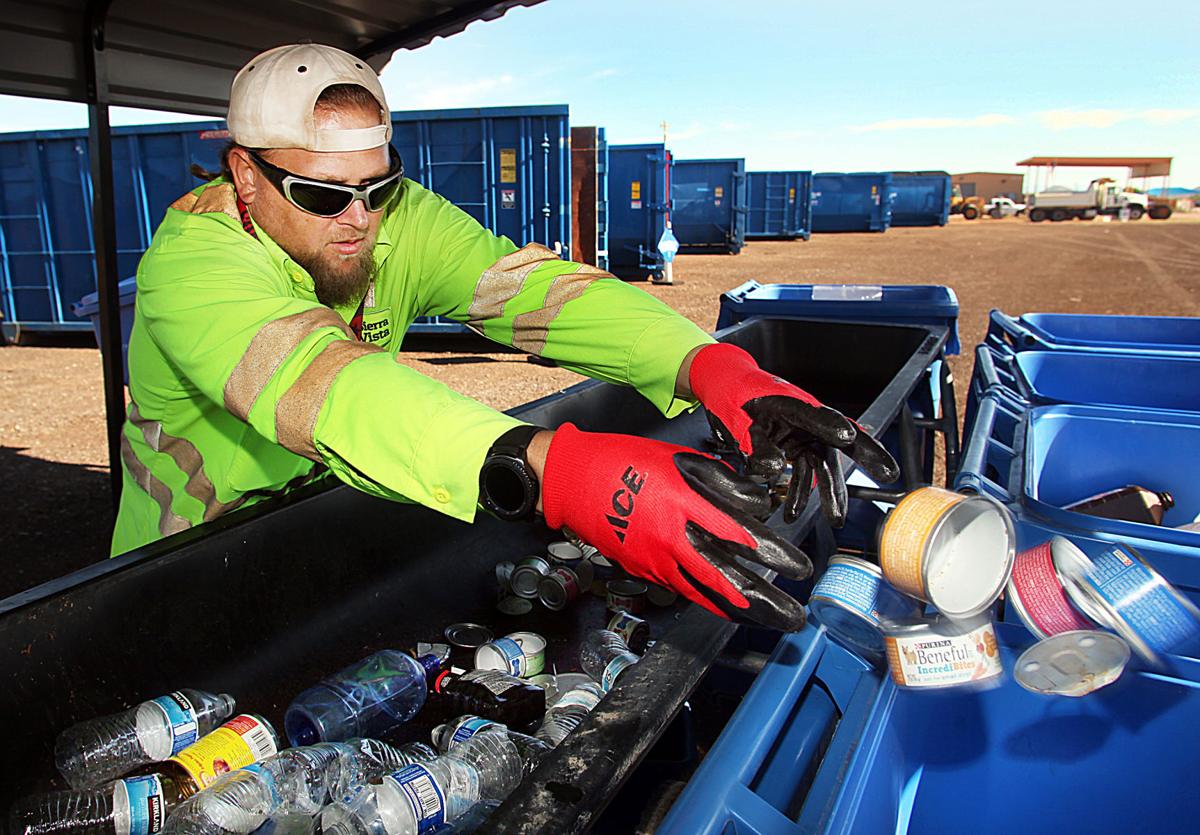 SIERRA VISTA — The recycling market across the globe has seen a major shift in recent years. Cities and towns all over the country are rethinking the way they recycle and working to come up with solutions that meet the demand by residents for recycling.

The City of Sierra Vista is not immune to the restriction of certain recycle materials by China that triggered the global recycling “crisis.”

In May, the city council voted to eliminate curbside pick-up for recycling starting in July, opting to set up an alternative to keep recycling alive in the area.

On Monday, the city officially opened its new recycling drop off center located at the Transfer Station at 7201 E. Highway 90.

Though it will take some time for city officials to get a sense of the logistics for the new set-up, the first couple days of operation saw a steady flow of Cochise County residents.

Public Works Operations Manager Richard Cayer said that so far, things are running smoothly and there was a good number of people to show up.

“It was busy; it was probably about over 70 vehicles yesterday,” he said. “We didn’t ask where the customers were from but based on the conversations it seemed like the majority were from outside the city, in the county.”

The new center is not just open to citizens of Sierra Vista. It’s open to anyone in the county who wants to recycle and it’s no charge to the residents.

“Its very customer friendly and it’s for anyone who wants to come,” Cayer said. “We are looking at marketing it next to Bisbee because so many people in Bisbee work in Sierra Vista either on Fort or the hospital and they can come in the morning, drive through, pop the lid on their vehicle, we take their stuff and they drive out; they are here two minutes on the way to work and they can recycle knowing that those materials will actually be recycled.”

To set the drop off center up, the city partnered with Republic Services, Inc, one of the nation’s leaders in recycling and solid waste services.

“Our role is to accept and separate and sort all recyclable materials into rolls offs and Republic Services will transport them, market them and get those commodities to vendors,” Cayer said. “The agreement we have is we get half the revenue of the commodities.”

“So, whatever they sell, they have an incentive to maximize the price and shop around for the best deal.”

Jake Anderson, general manager for Republic Services based in Tucson, said they are excited to partner with Sierra Vista to offer residents of the county an option to recycle.

“Sierra Vista made the decision to go away from residential curbside, we connected and offered an opportunity to do more specific commercial, large container options for them,” he said. “The education piece is important for the public to understand recycling is not what it used to be.”

“It’s more expensive than trash and that wasn’t the case for many, many years.”

Anderson said that because Republic Services is so established, they have a network of vendors and resources that help to achieve the maximum return on recycled commadies.

“Two years ago I sold more than 90 percent of my recycling at a high revenue mark, high volume mark but that’s changed and we don’t take any to China to anymore,” he said. “It leaves me to find new buyers at less volume, less money, and it’s scattered in the U.S. and internationally so it’s more difficult logistically now as it’s not as consistent.”

“We have a lot of resources and relationships so we can leverage those relationships and if we can’t sell a recycled material in the Southwest maybe there’s a new papermill in Indianapolis that does.”

To ensure the smallest contamination rate in the commodities collected at the recycle center, shifts are staffed by two Department of Corrections employees who sort through each bag to separate items. There is also always a city employee supervising and working directly with residents who stop by.

“The key right now is making sure the materials get sorted correctly and contamination is as close to 0 as we can get it,” Cayer said. “We are going to have receipts, we are going to have a chain of custody on these materials so we will be able to see that it went from us to Republic Services to the vendor and ended up as a product.”

“We’re going to be able to guarantee all this is being recycled into new products and that’s what people want; they want to recycle realistically.”

Cayer said the biggest issue they have faced with the new center in the first couple days is just some misunderstandings on the types of items that can be accepted. Anytime someone brings unaccepted materials, like paper products, they let the person know alternative places to recycle the item or will throw it away for them.

“People coming out here, it’s amazing that there’s so many things they take the time to recycle and even if it’s not accepted right now they want to know where they can bring it,” he said. “So many people are really passionate about recycling and we want to make sure that were doing our part to make that happen.”

City Public Information Officer Adam Curtis spoke to the importance of recycling to residents of the city and Sierra Vista’s desire to be environmentally responsible.

“Despite challenges that cities and communities, even globally, are experiencing, Sierra Vista is not giving up on recycling,” he said. “It’s discouraging to read about the recycling market and we wanted to do what we can to make a difference and encourage residents to not feel discouraged.”

“We’re not in it to make money, we don’t want to increase rates. The citizens care and it’s the right thing to do.”

The city will be allowing residents who have blue recycle bins from pick up service to keep the bins because the cost and labor that would have been involved in collecting them all would have been too high.

To help inspire residents to find new purposes for their blue bins, the city will be partnering with Ace Hardware to hold an upcycle contest.

The contest will launch on July 15. Residents can submit video and photos of their repurposed blue bins by using the hashtag #RenewYourBlue on social media or filling out an online form. The submissions will appear in an online gallery and the public will be able to vote for their favorites once per day.

The contest is tentatively set to run about two months, including a week-long voting period at the end.

Ace Hardware, Broxton’s Coffee and Rainey Pain & Performance have all donated prizes. Curtis is still looking for businesses or organizations to sponsor prizes. Anyone interested can contact him at PIO@SierraVistaAZ.gov by July 12.

What can you bring: Clean aluminum and steel cans, corrugated cardboard and plastic containers with the numbers 1 or 2.