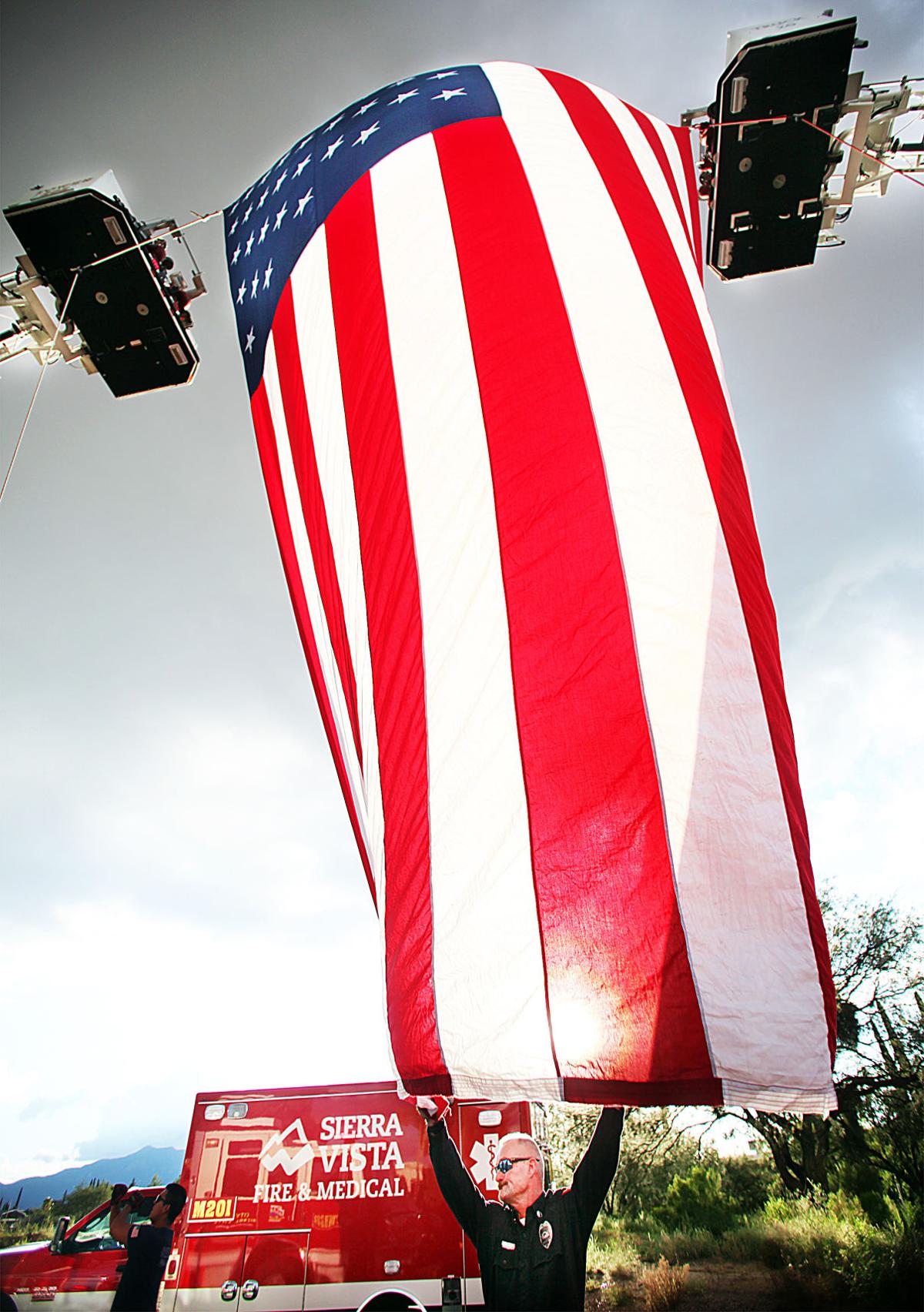 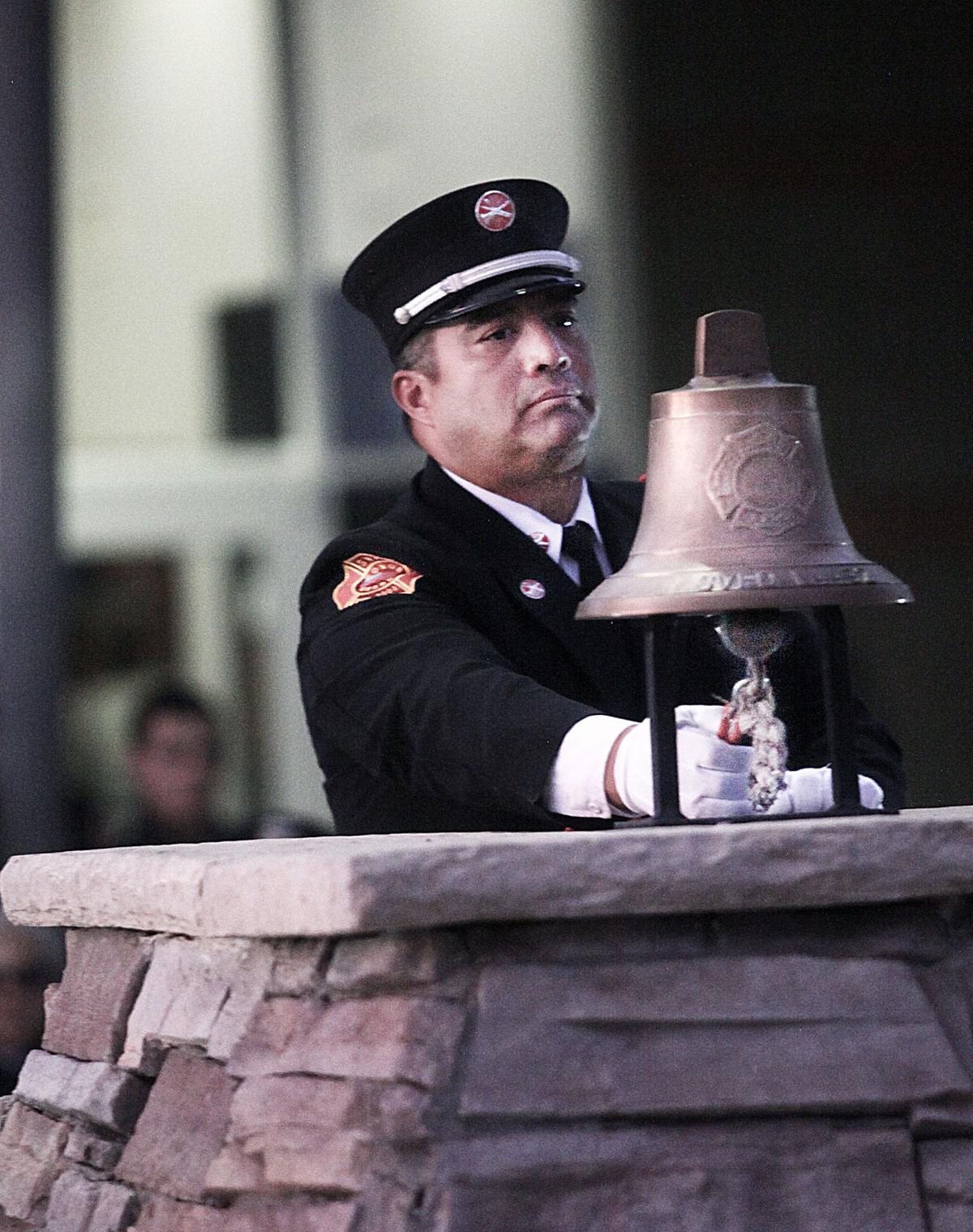 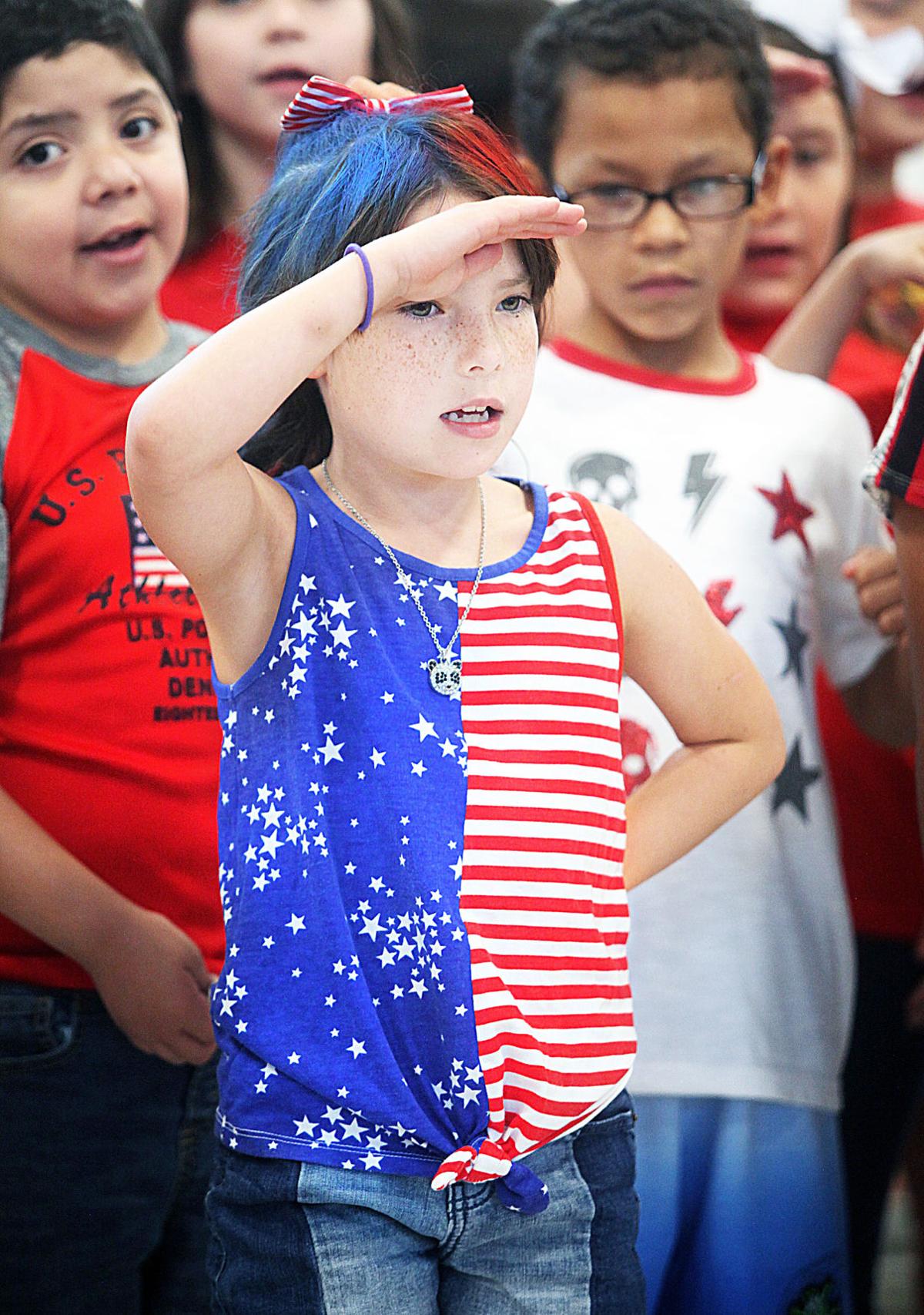 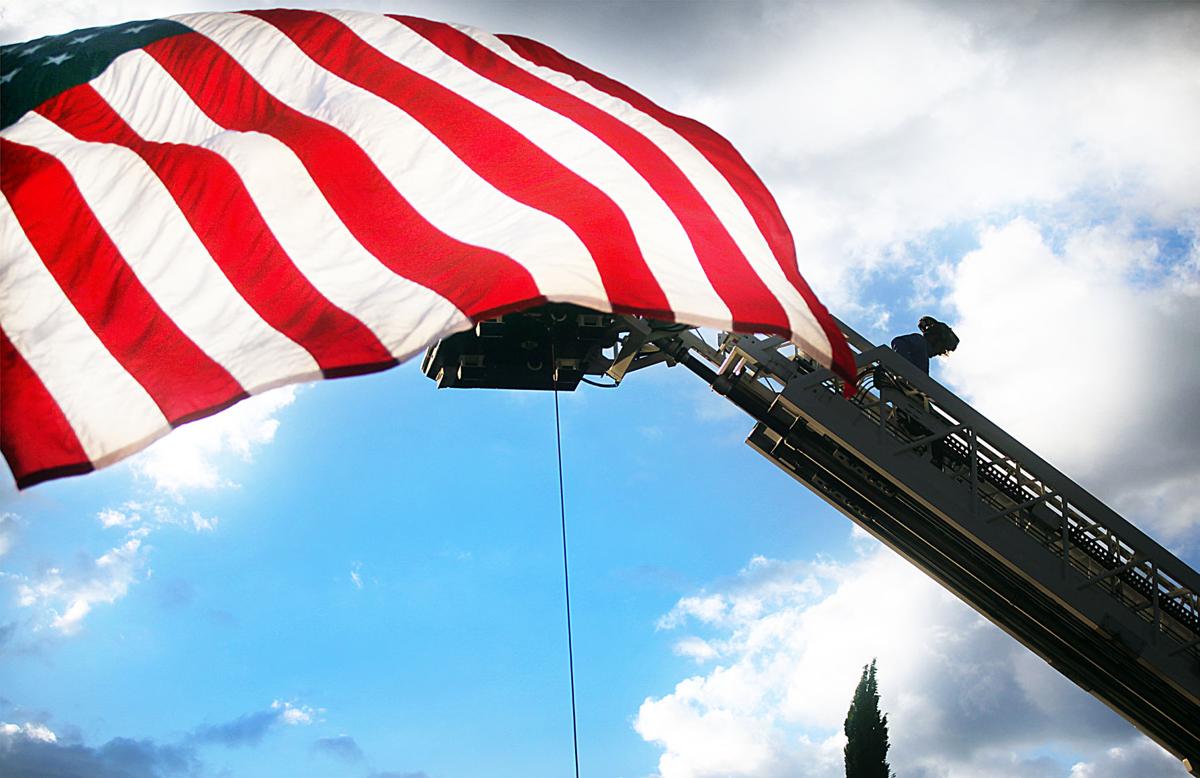 A Fort Huachuca firefighter walks down the ladder after securing the American Flag Wednesday at the Day of Remembrance ceremony at Sierra Vista Fire and Medical Station 3. 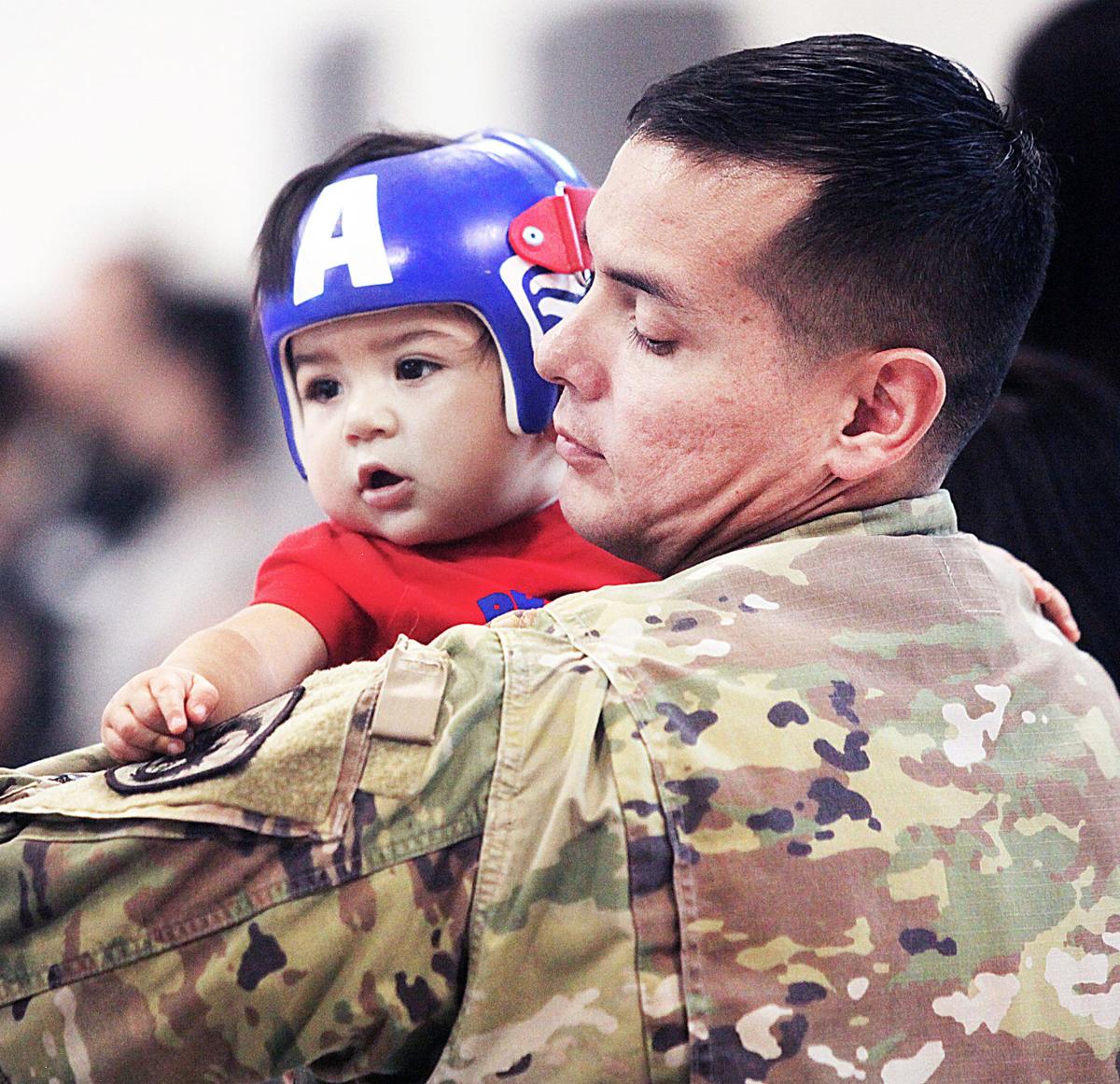 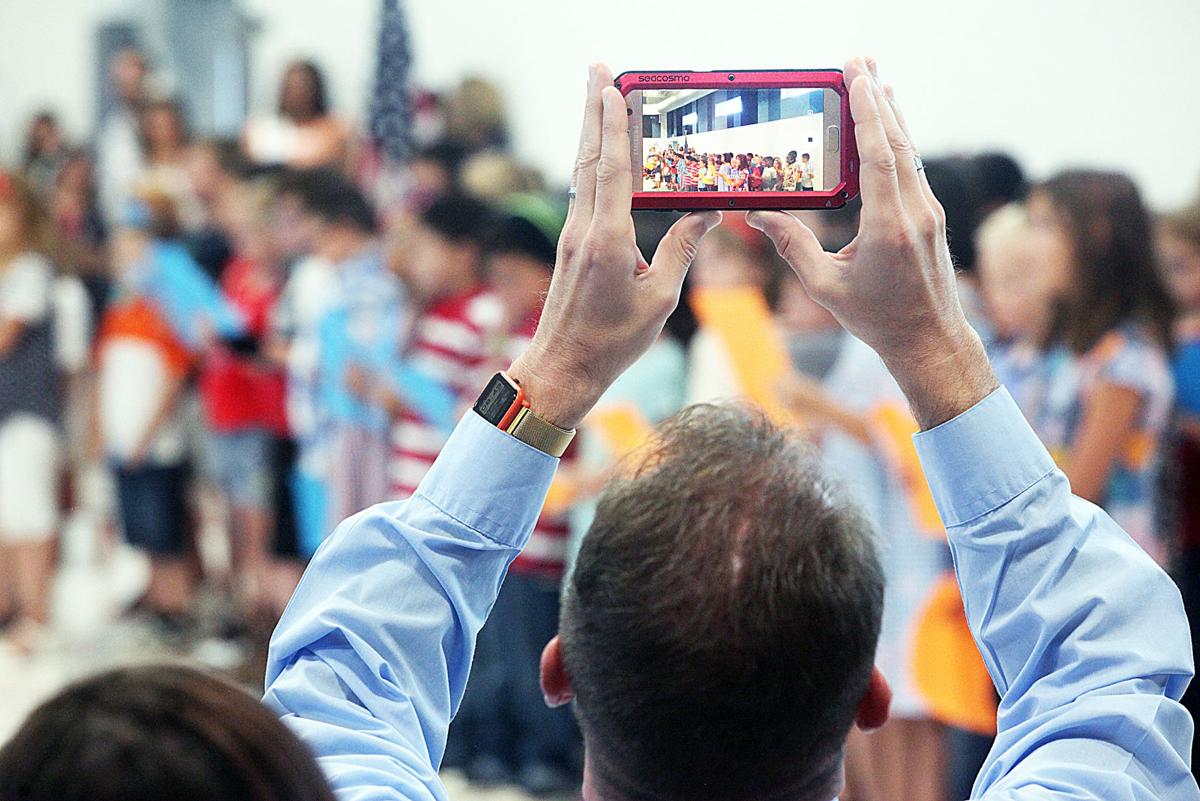 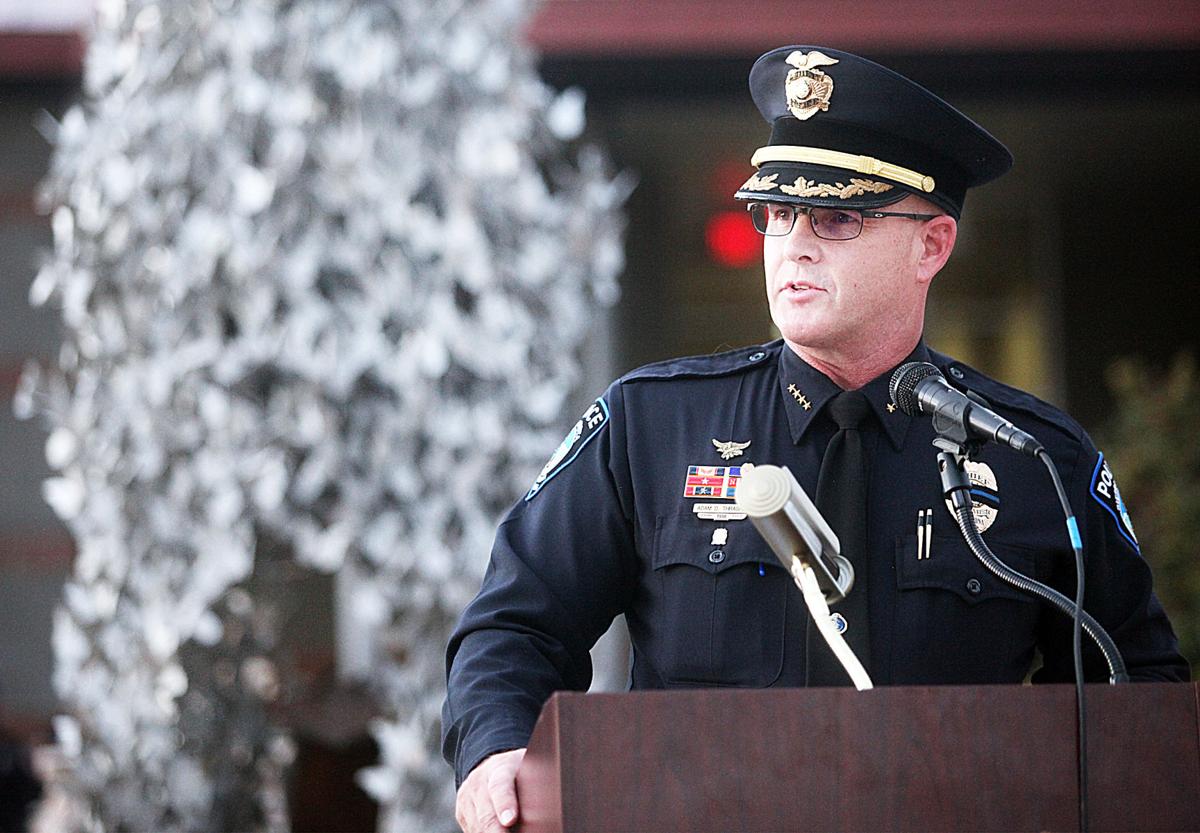 Sierra Vista Police Chief Adam Thrasher is one of the honored guest speakers during yesterday’s annual September 11 observance at Station 3.

A proud Vicky Bradley greets her son Ayden, 7, after he performed with his classmates at Wednesday’s Village Meadows Elementary School 9/11 remembrance. 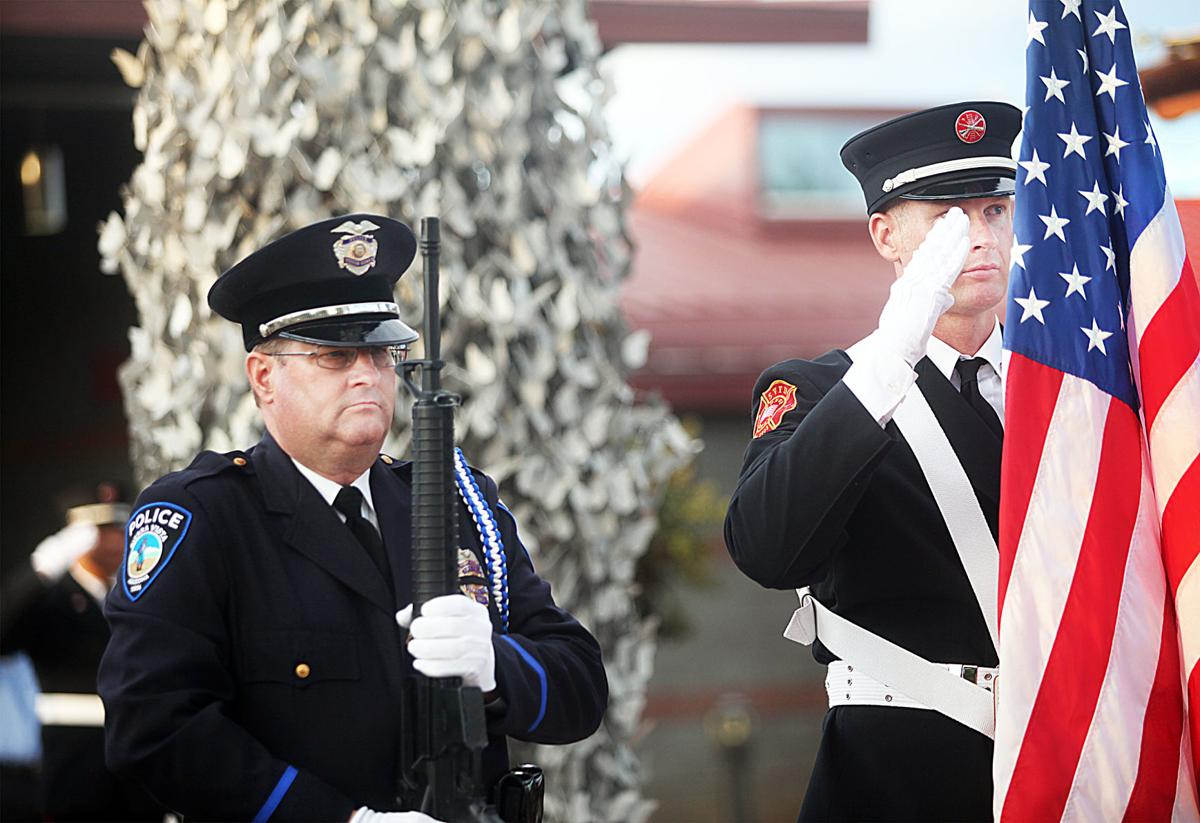 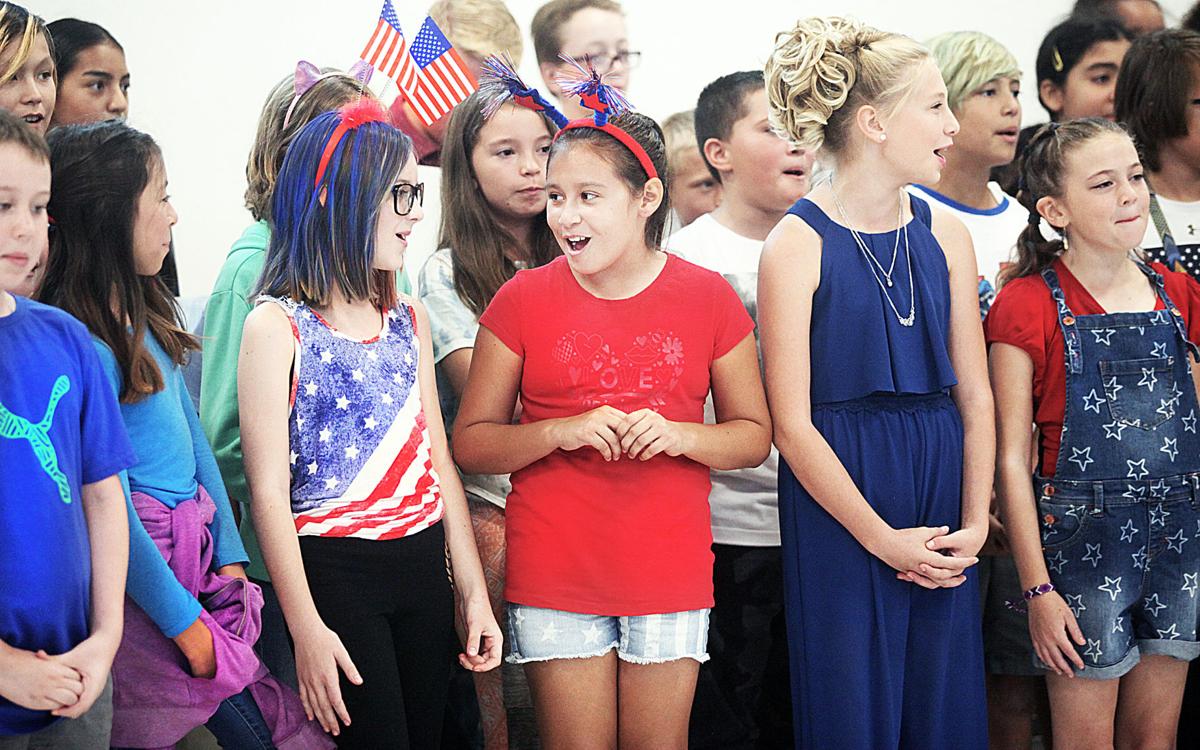 Each grade at Village Meadows Elementary School took turns as they participated in Wednesday’s 9/11 remembrance ceremony. 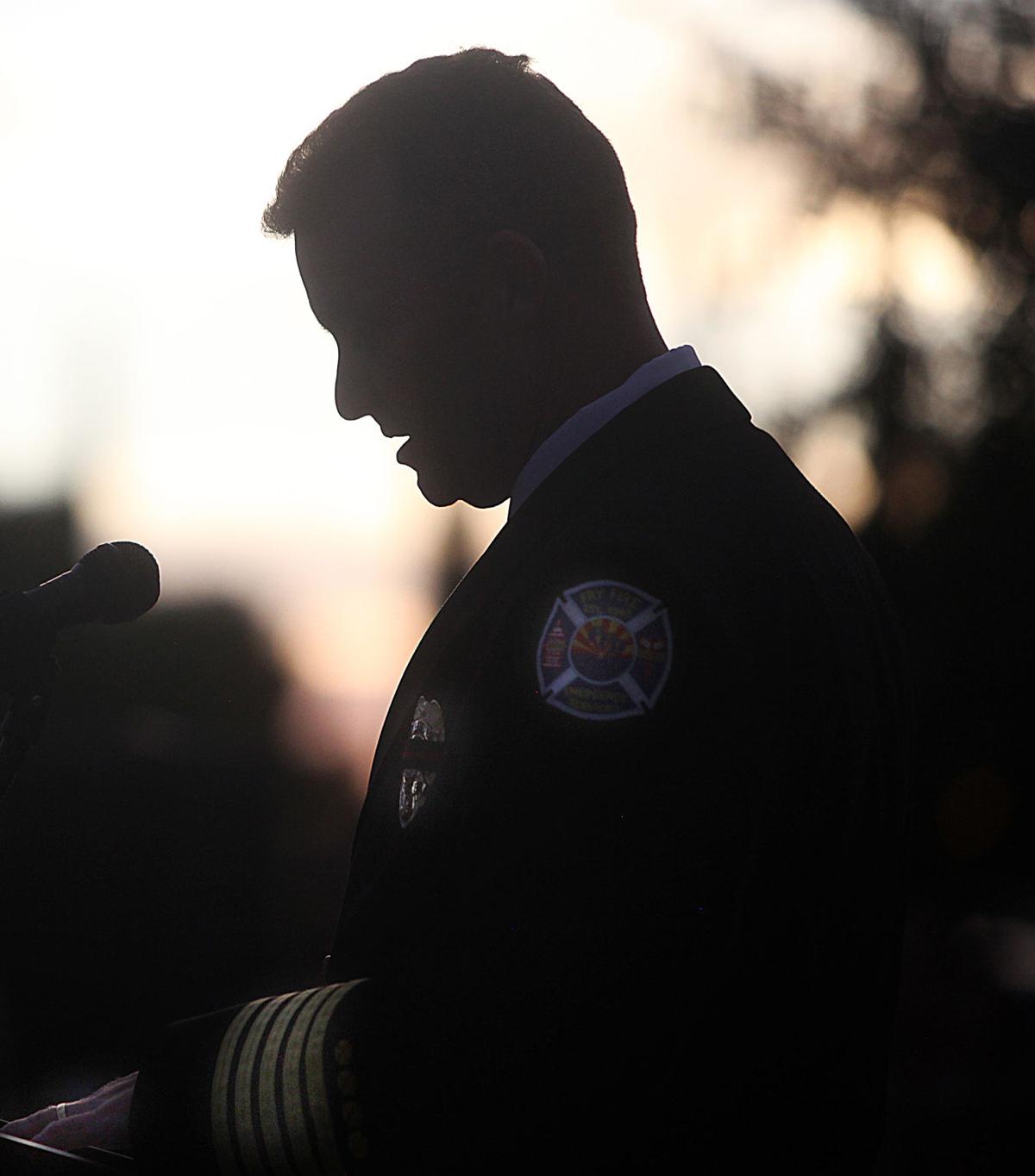 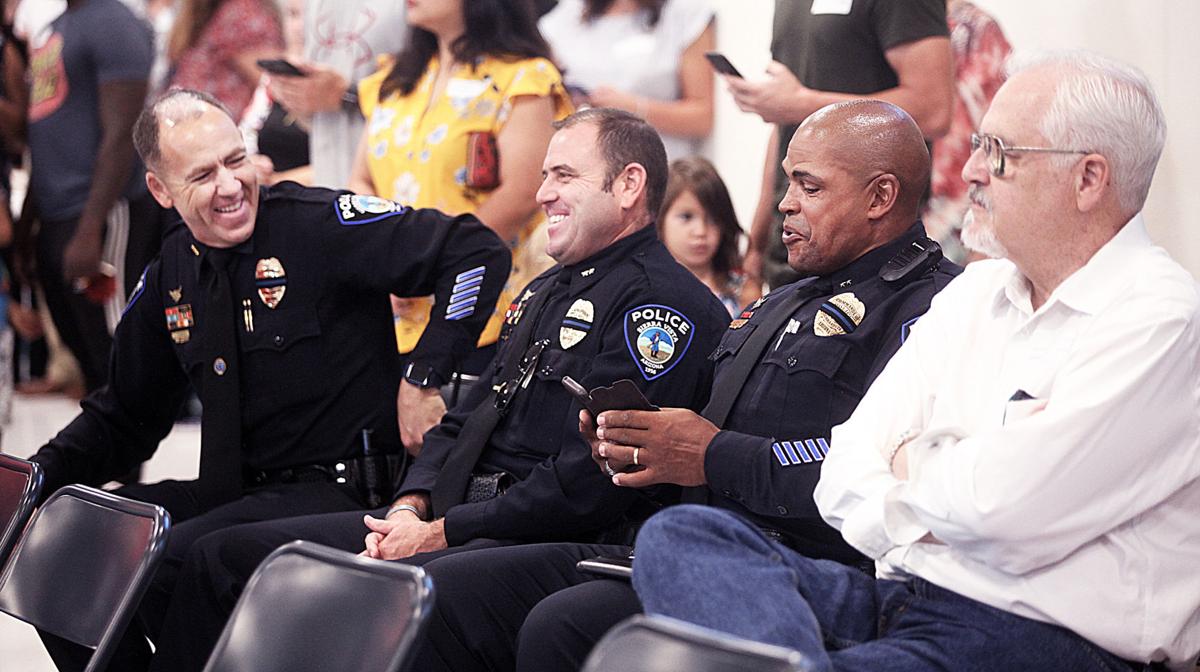 A Fort Huachuca firefighter walks down the ladder after securing the American Flag Wednesday at the Day of Remembrance ceremony at Sierra Vista Fire and Medical Station 3.

Sierra Vista Police Chief Adam Thrasher is one of the honored guest speakers during yesterday’s annual September 11 observance at Station 3.

A proud Vicky Bradley greets her son Ayden, 7, after he performed with his classmates at Wednesday’s Village Meadows Elementary School 9/11 remembrance.

Each grade at Village Meadows Elementary School took turns as they participated in Wednesday’s 9/11 remembrance ceremony.

SIERRA VISTA — Ringing of bells and the playing of “Amazing Grace” on bagpipes filled the somber air Wednesday night as the community came together to remember the fallen heroes of a tragedy that changed the country in 2001.

“... Reflect upon the wound but we must not stop there,” said Sierra Vista Fire & Medical Services Deputy Chief Jodie Ryan at Wednesday night’s 9/11 Remembrance Ceremony.

It was almost two decades ago that nearly 3,000 people, including more than 340 first responders, died when hijacked planes slammed into the World Trade Center, the Pentagon and crashed in a field near Shanksville, Pennsylvania.

“Eighteen years ago at the hands of true evil our lives changed forever,” said Cochise County Sheriff Mark Dannels. “The attack on September 11, 2001 temporarily paralyzed this nation. But while many Americans were attempting to understand what was happening, community responders, police officers and firefighters were responding to this tragedy …

“We must never forget those who have paid the ultimate sacrifice for our personal freedoms, liberties and safeties.”

Sam Marshall of the fire department and Mayor Rick Muller encouraged the hundreds of community members gathered in front of the memorial at Sierra Vista Fire and Medical Fire Station #3 to honor those who lived and remember the tragedy to guide and help the younger generations what truly occurred and the sacrifices that were made.

The memorial features thousands of butterflies representing those lost on 9/11 and is made from “steel I-beam recovered from ground zero after the World Trade Center was destroyed,” according to the City of Sierra Vista Facebook page.

“On the plane in Pennsylvania it happened. At the Pentagon it happened. And it happened at the towers. Where people said ‘I have to help my fellow man,’” Muller said. “I hope you’ll take the time to talk to your children and grandchildren about why it’s important to remember days like today.”

Children currently attending Village Meadows Elementary School were not even born when the country was hit with the worst terrorist attack on U.S. soil. Since 2005, the Sierra Vista elementary school has paid tribute to those who lost their lives on that terrible day by inviting friends, military personnel, community leaders and first responders for its Patriot Day ceremony, which packed the school’s new multipurpose room to capacity Wednesday morning.

Children from kindergarten through third grade kicked-off the event with each class performing a patriotic song, followed by fourth through sixth-graders.

With raised cell phones, parents recorded performances of such patriotic selections as “God Bless America,” “You’re a High Flying Flag,” and “This Land is Your Land.”

“I absolutely love it that Village Meadows does this every year,” said Tiva Jordan, whose four children attend the school. “This ceremony is something that our former principal (Scot) Roppe started because of a personal impact that 9/11 had on his family.”

Village Meadows Elementary School started its annual 9/11 — now Patriot Day — ceremony on a small scale in 2005 when Roppe was the school’s principal.

After Roppe’s son-in-law joined the United States Marine Corps and was killed in Afghanistan in 2012, he made the remembrance much larger on behalf of all the first responders and those who have died during the attacks.

“I’m glad the school has continued the tribute,” he said. “Every year it draws a large number of families and parents love it.”

Jordan also spoke of the importance of teaching children about an event that happened in this country and continues to have a significant impact 18 years later.

“Because we live so close to a military base, with the large number of military families we have in this area, a terrorist attack like 9/11 hits especially close to home,” she said. “I think it’s a wonderful tribute to our military and first responders, and a really great educational event for the students.”

When sixth-graders took the stage, some read poetry written by students. Zarra Schmidt read “First Responders,” a poem she wrote about the collapse of the Twin Towers, those who died in the attack and the brave men and women who rushed into harm’s way to help victims.

Marshall feels the generation that followed 9/11 need to know about all these topics, not just the good or the bad.

“We must never forget and embrace our responsibility to teach an entire generation not even born during 9/11 and generations to come about the attacks, but more importantly, about the heroism of their fellow Americans,” Marshall said.

“I think it’s really important that we never forget what happened to our country on 9/11 and always thank the people who sacrificed so much to help everyone,” Summers said.

“And we need to remember the first responders who saved so many people,” she said. “A lot of the responders were heroes who died while they were helping rescue people.”

Most people agree with Knisely that first responders are heroes, but Arizona Department of Public Safety Captain Dean Chase reminded the attendees of the ceremony that average citizens were also helping others on 9/11, and small actions like holding doors open helped save lives during a hectic time.

“There’s nothing I can really say to honor those who perished that day,” he said. “Those were good people (that) in a time of need rose up to help their fellow man.”

Chase encouraged the public to practice those good habits, like holding a door open, that these citizens and first responders did every day, so if there is a time of tragedy, they are a little more prepared.

“Emulate their lives and what they did, and they will truly never be forgotten,” he said.

Monica Fuller, who has two grandchildren at Village Meadows, praised the ceremony as “a great event.”

“I’m so glad the school is doing this,” she said. “All of the kids are doing a great job with the performances and it’s a really nice remembrance to all the people who died and the families who lost so much during 9/11.”